Soaking Up Inspiration in Greece

I haven’t written a travel blog post in ages, and I’m somewhat rusty. We haven’t gone on a real vacation since Covid started, in what feels like a lifetime ago. But this summer, after much hesitation, we took a risk and flew to Greece. Traveling after a long hiatus was overwhelming and exhilarating all at once. It also provided lots of inspiration.

Greece felt unexpectedly familiar. In many ways it reminded me of Israel, where I grew up. The weather was similar, the atmosphere, the food, even the people. Much of the landscape reminded me of my favorite parts of the Judaean Mountains. The vegetation, too, looked similar, especially the millions of olive trees that dot the landscape. Some were ancient, and I knew my father would have loved them if only he were there to see them. 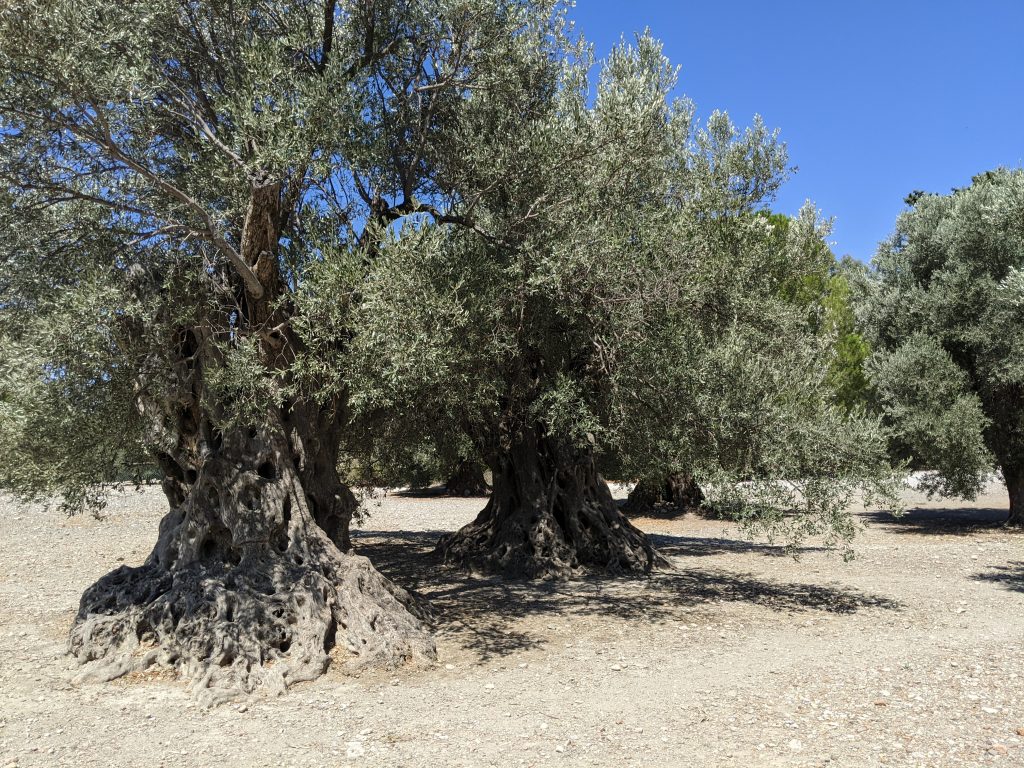 It felt really good to once again be in a place with a long history. Place names from mythology, from history books, from art history classes came to life before my eyes. The Acropolis in Athens, where democracy was born; Delphi, once considered the center of the world, where, for thousands of years, people from all over the ancient world came to listen to oracle divinations; Olympia, the original location of the Olympic Games; the Palace of Knossos, the ceremonial and political center of the Minoan civilization… 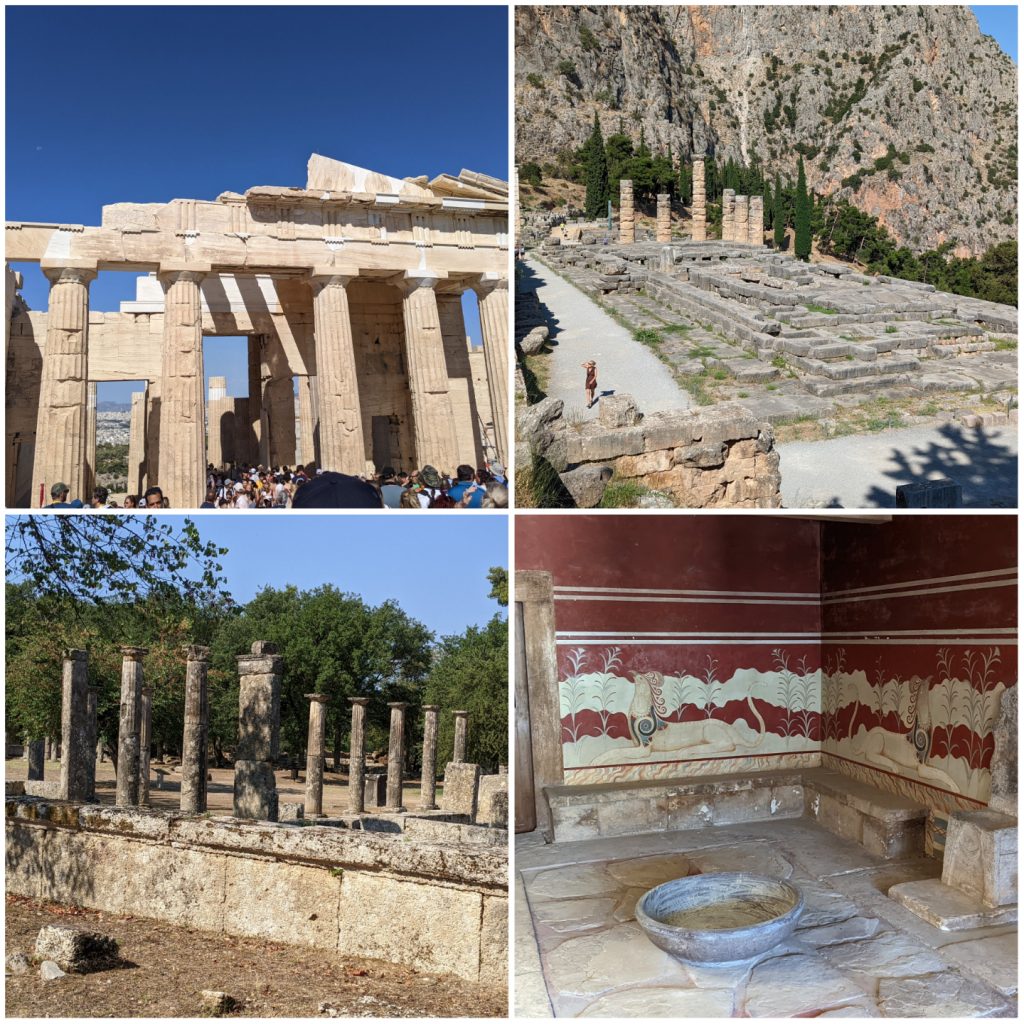 There is a different energy to very old places, a sort of magic.

With thousands of years of history come thousands of years of art. Greek art was, of course, the basis of Western art in general, and is an important part of every art history course. But although I studied art history in high school and college, and knew a lot about Greek art, seeing so much of it all at once made it all the more impressive. The diversity of local regional cultures and the changes that occurred over time were more apparent in person, too. The sheer skillfulness of those ancient humans in architecture, sculpture, wall paintings, pottery, metal smithing and much more was truly mind boggling. 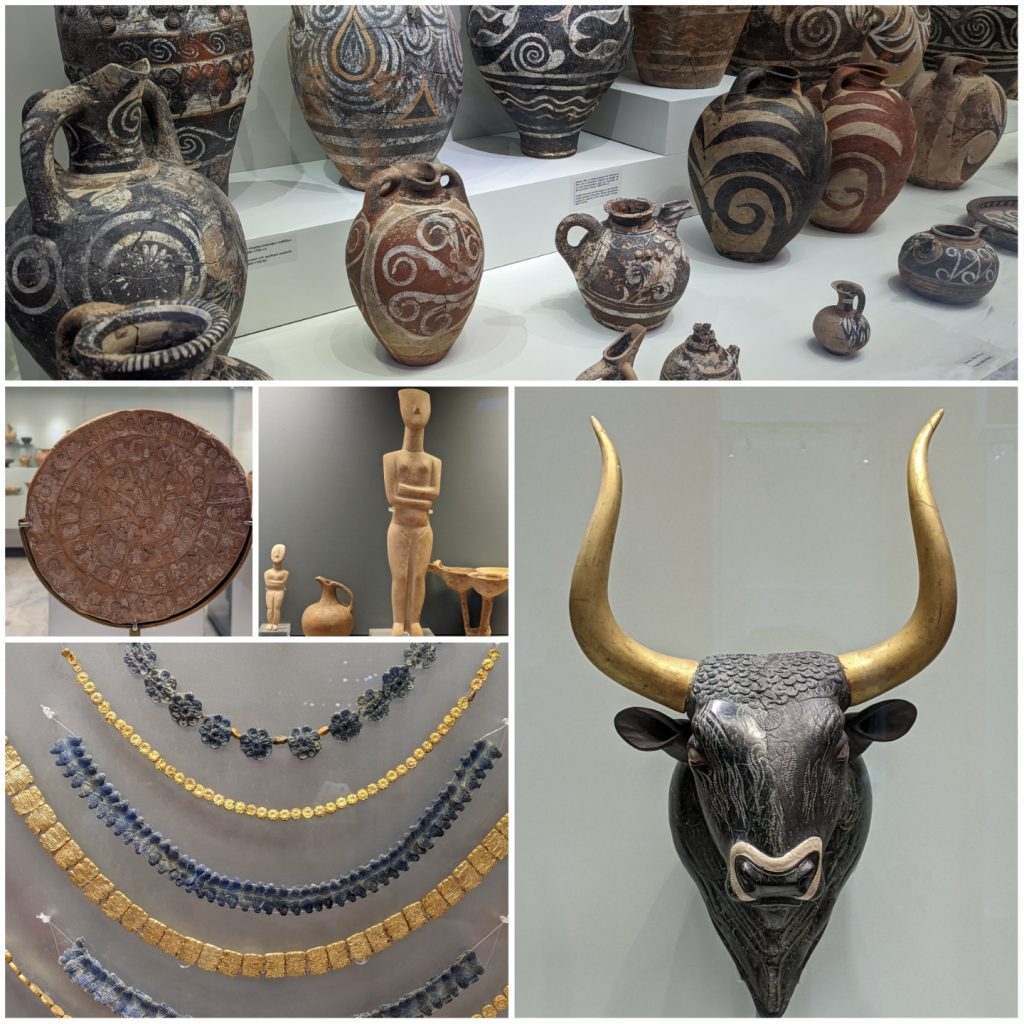 I must have taken hundreds of pictures in museums alone, and there were hundreds more I should have taken and didn’t. There wasn’t enough time to absorb everything.

More modern crafts were inspiring, too. I enjoyed the textiles I saw in museums and shops, some very old, others more recent: 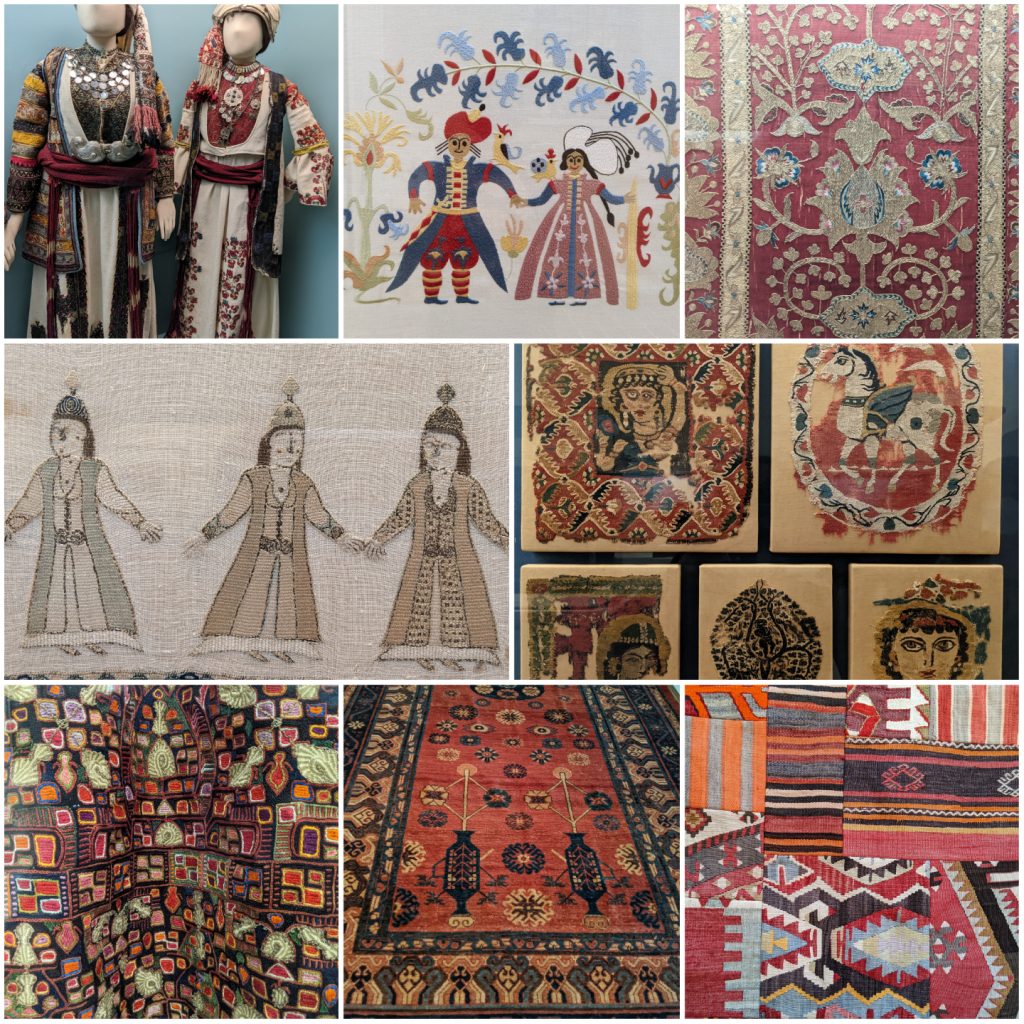 Looking at beautiful, colorful pottery in shops and markets filled me with joy. I admired the skillfulness and imagination of its makers, and was sad I couldn’t fit any in my backpack. 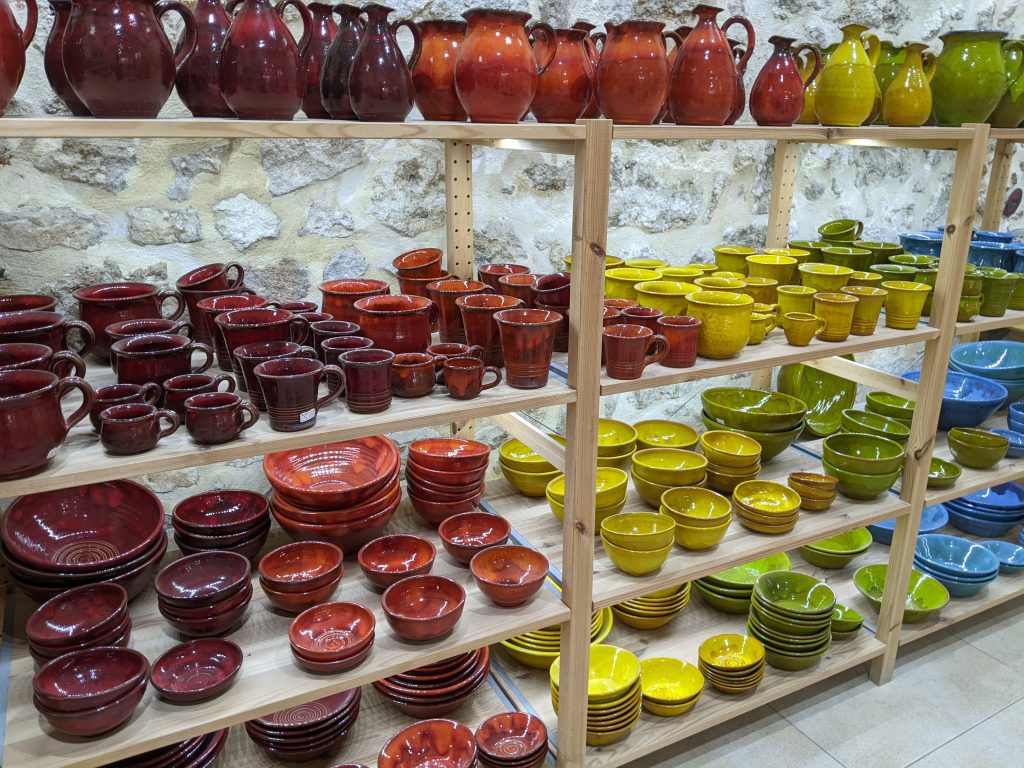 Greece is surrounded by sea, and fishing is an important part of life. No wonder that there was  lots of fish art to be seen. Some was more serious, some more whimsical: 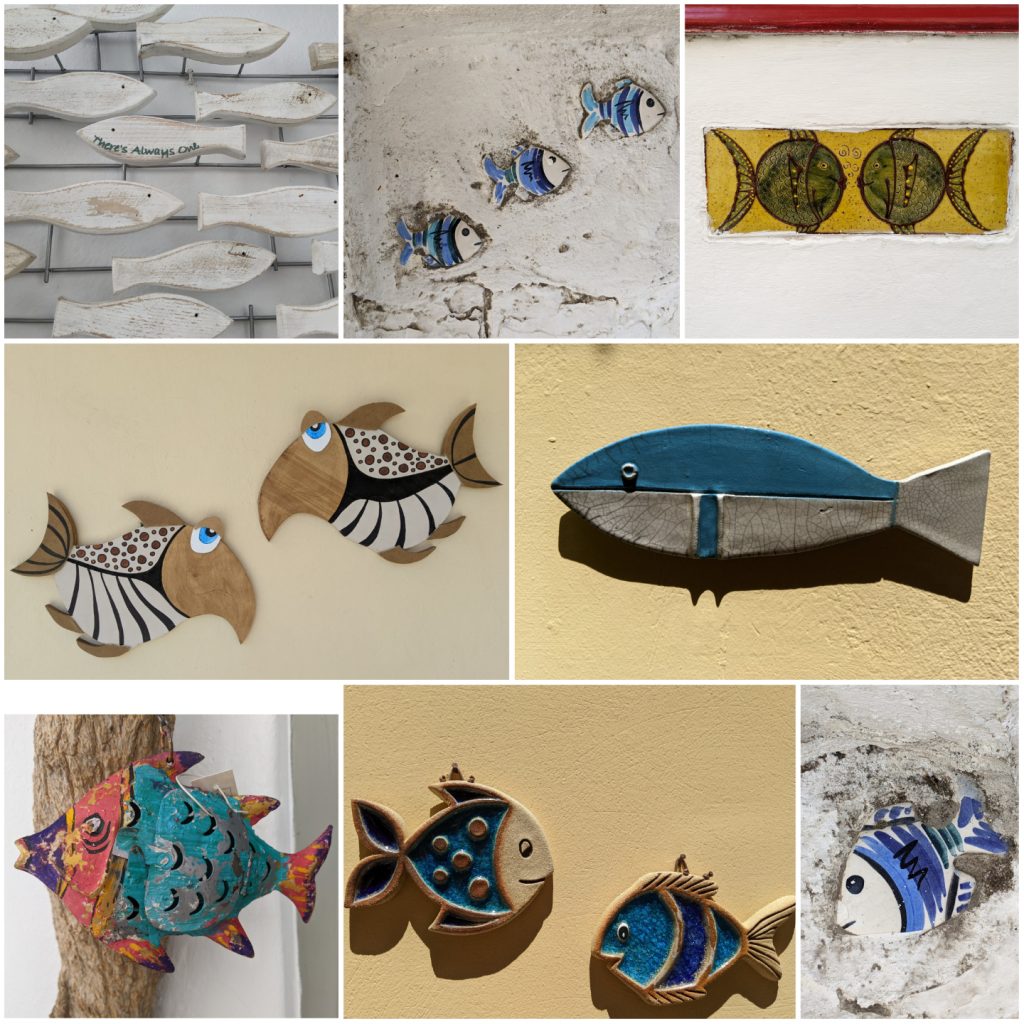 White and Blue: The Colors of Cycladic Architecture

Of all the impressive architecture we’ve seen, the one that sticks in my mind most is that of the Cycladic islands. There, we’ve seen towns and villages filled with picturesque allies, populated by white-walled houses with blue doors and windows. The white reflected the sun, while the blue mirrored the colors of the sky and the Mediterranean sea. White and blue, to me, are the colors of Greece. I guess the Greek think so, too, since they put these colors in their flag. 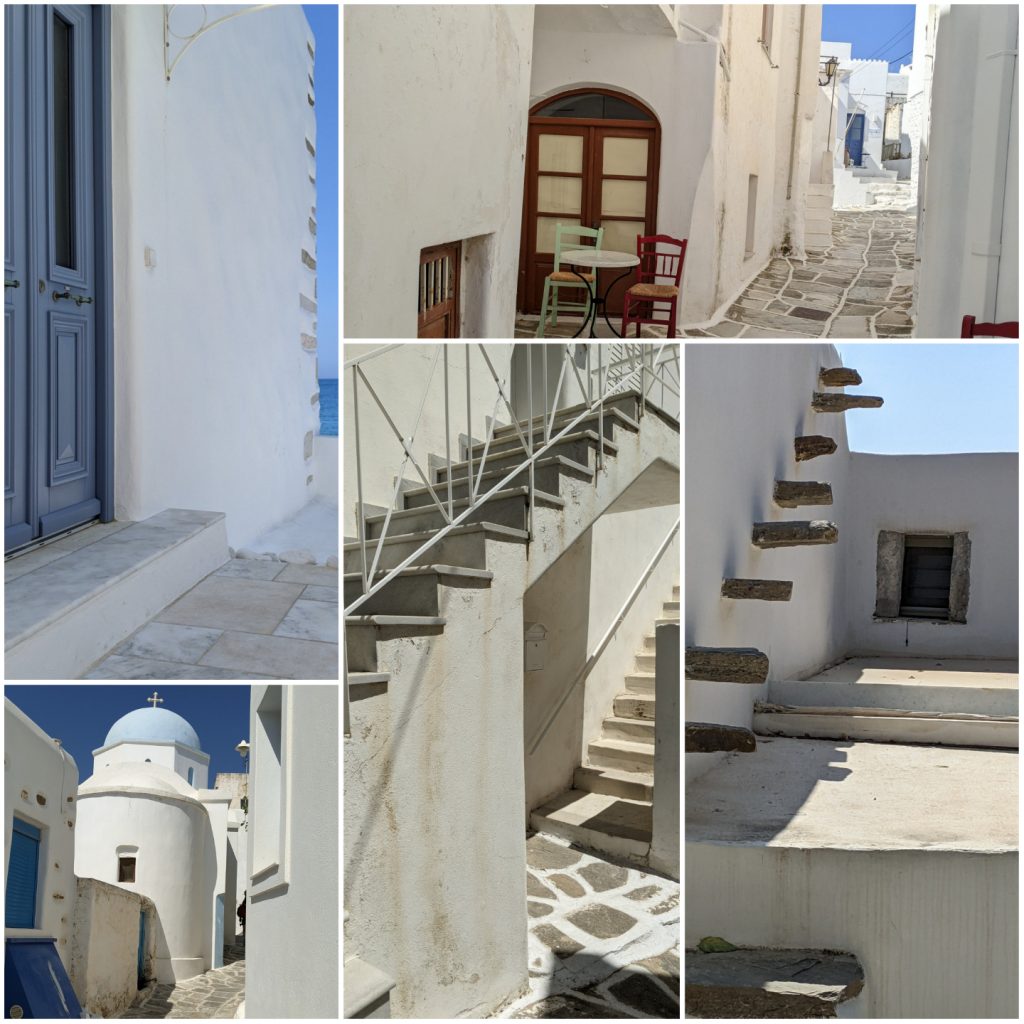 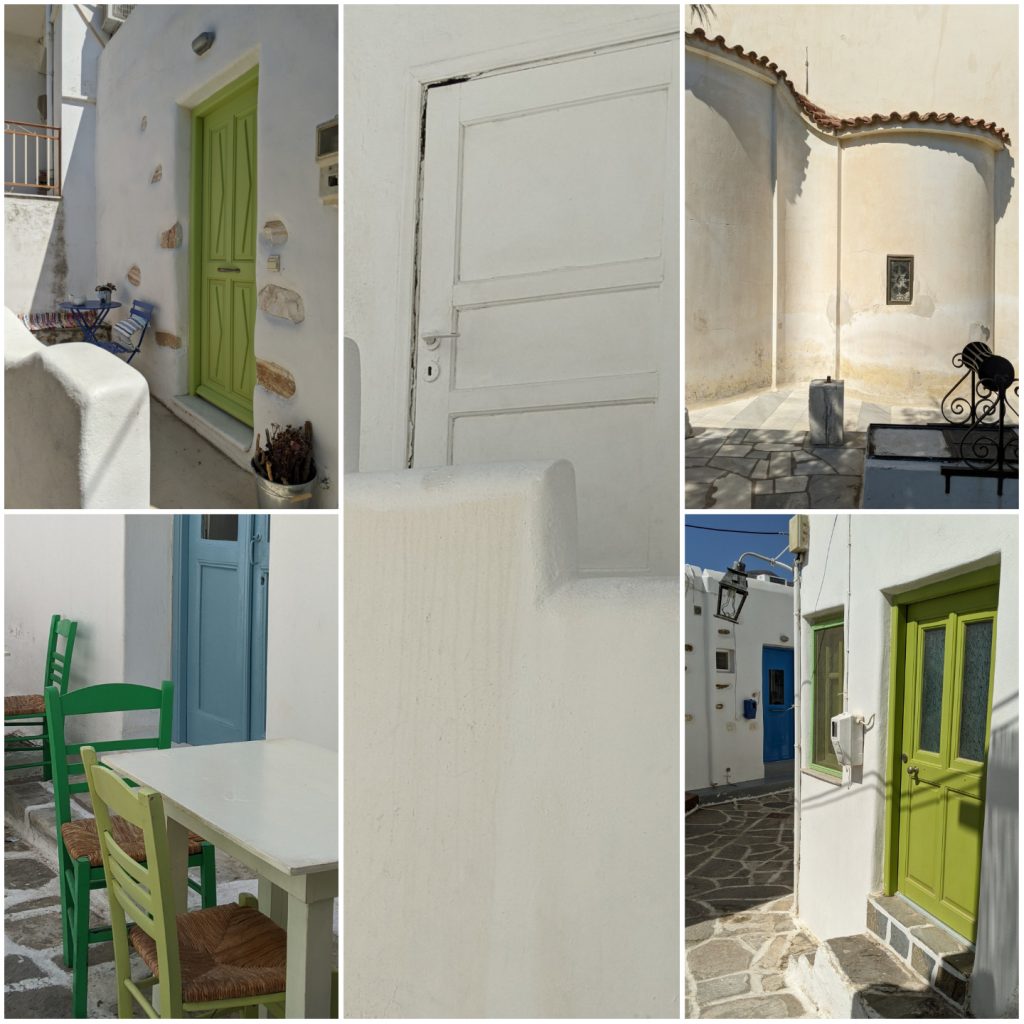 I’ve always loved old doors and windows, wondering about the stories they could tell. There aren’t any interesting doors and windows in the modern, suburban place I live in, but there were plenty gorgeous ones in Greece. I just couldn’t get enough of them… 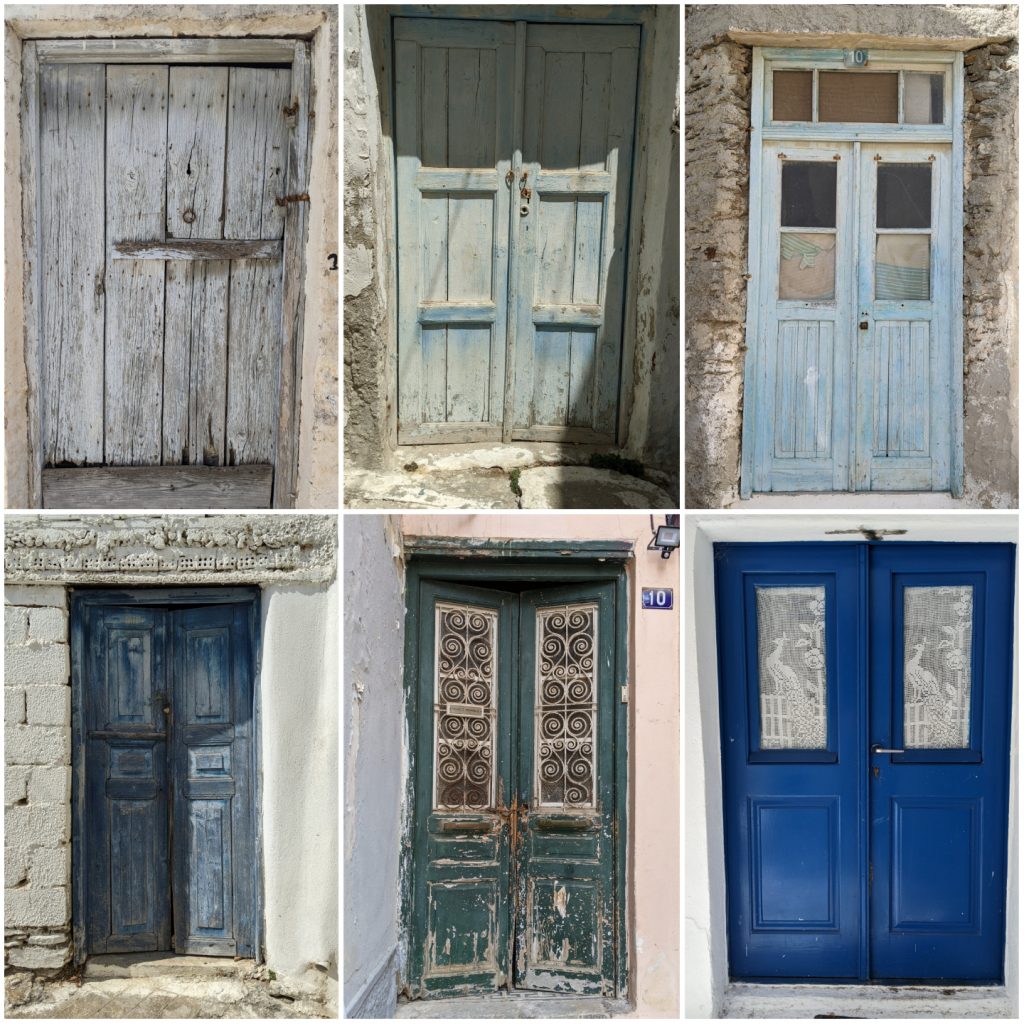 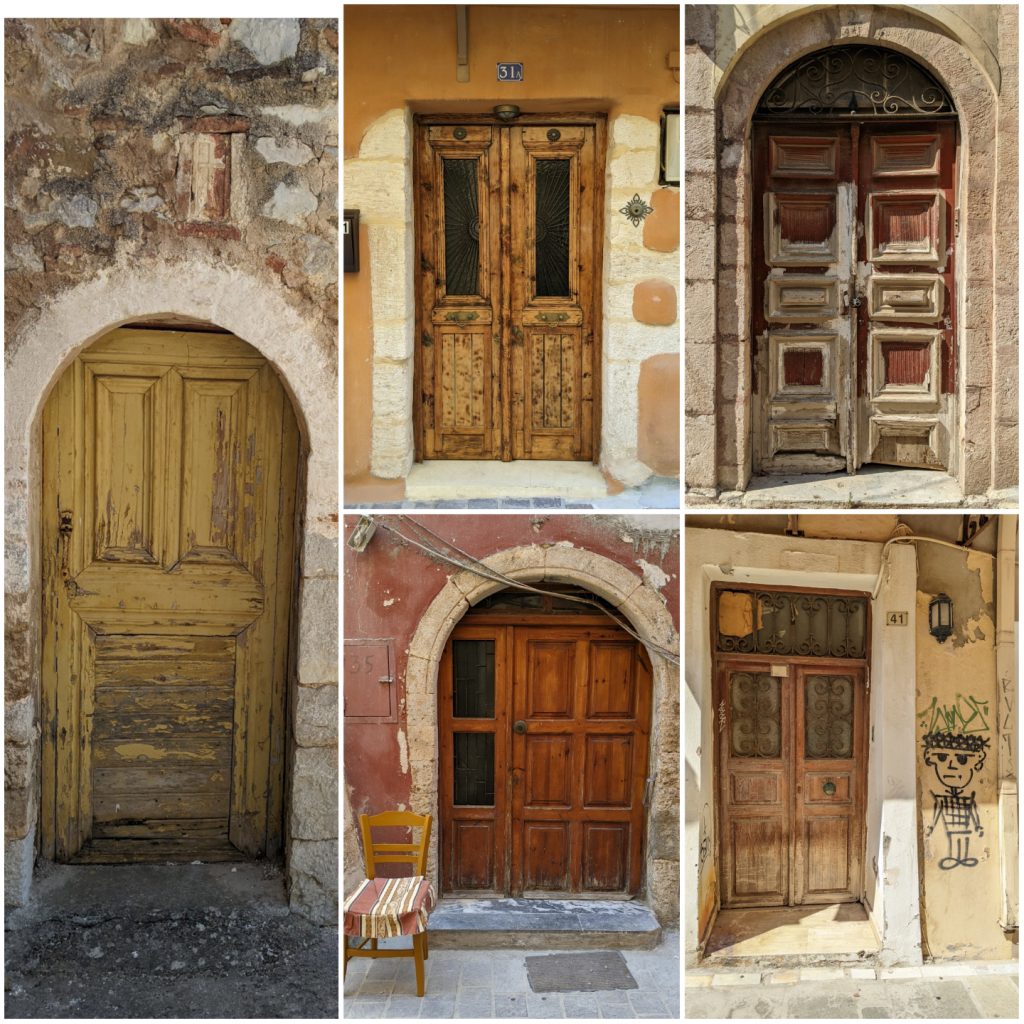 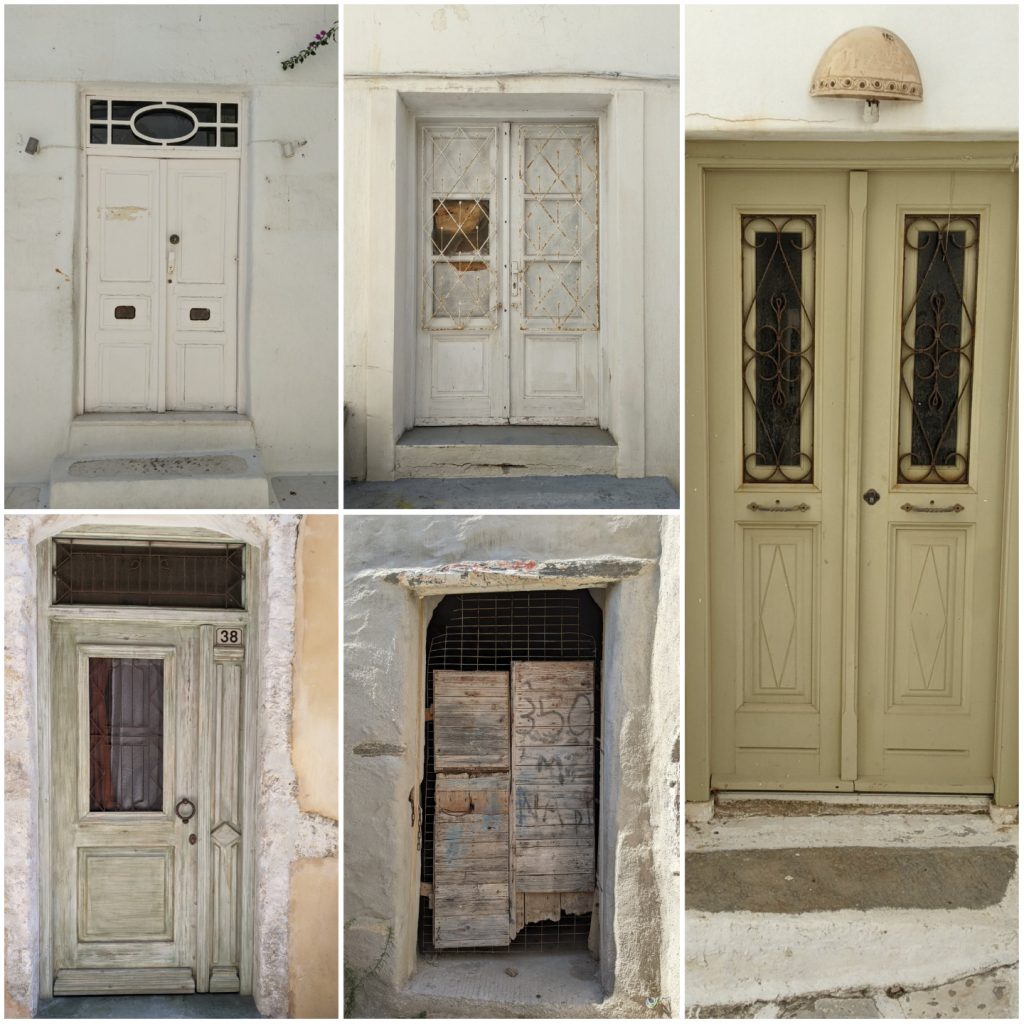 There were also beautiful door knockers, although a bit less diverse than the ones I saw in Cartagena. 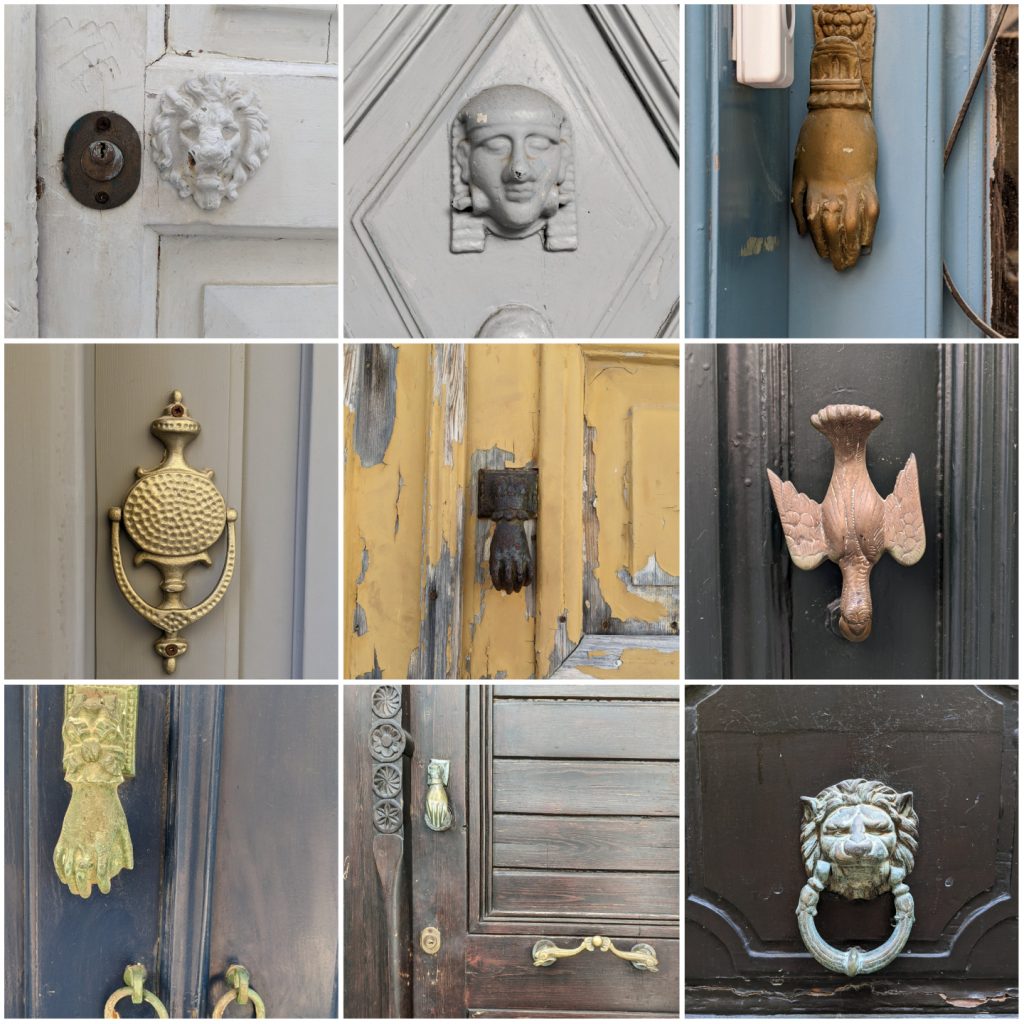 One flea market even offered some for sale, and I was really tempted… 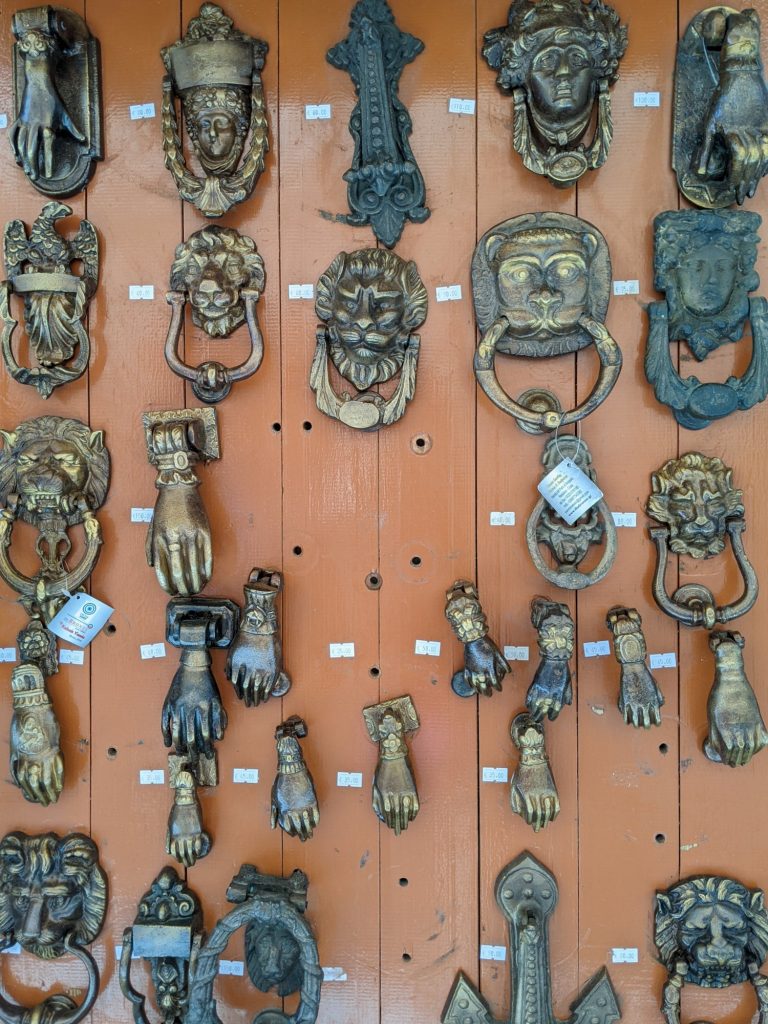 Old, heavily-populated places have a lot of accidental art and street art. I enjoyed snapping pictures of those whenever I found them. 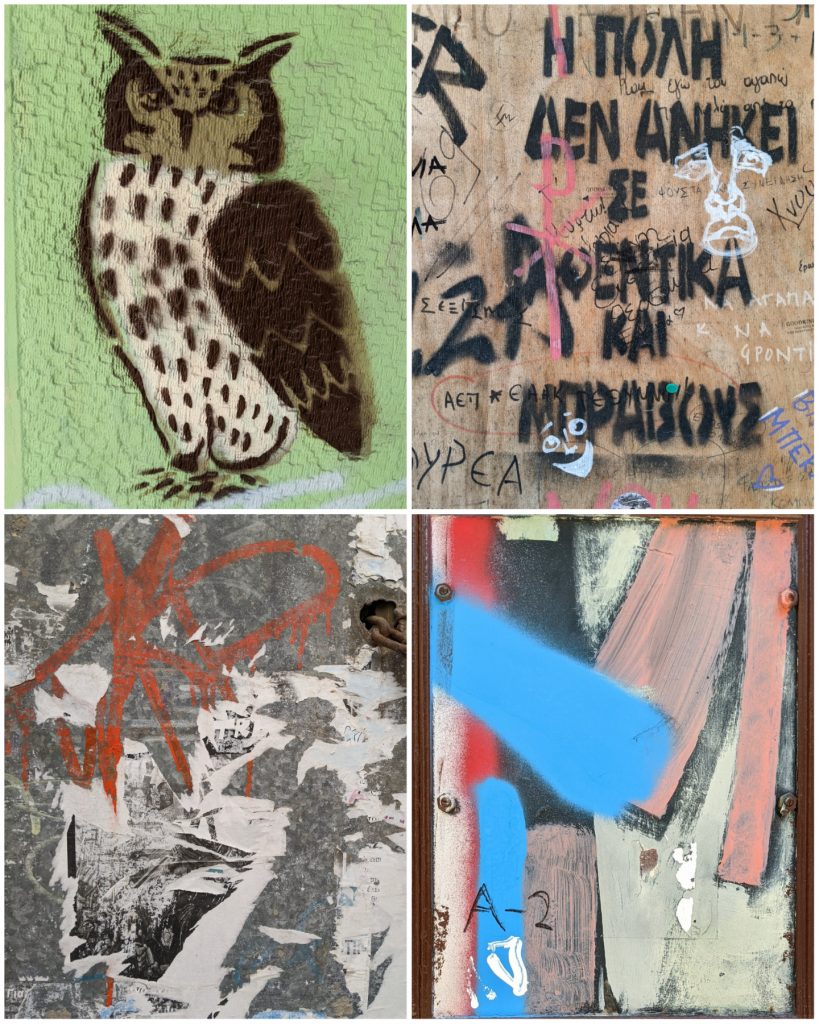 I don’t know if or how the inspiration I soaked up in Greece will show up in my art. I do know, however, that the experiences we have become a part of us, and that art expresses who we are.

I wasn’t able to create much art over the summer, but being in a new place, surrounded by different views, tastes, smells and so on was stimulating and invigorating. I came back excited to return to my studio, eager to resume work on my various projects.