Last week I helped my daughters move into their respective college housing for the 2022-2023 academic schoolyear. My eldest is a junior, and she went back to a familiar environment. For my second daughter, however, a freshman, it’s the beginning of a new adventure. 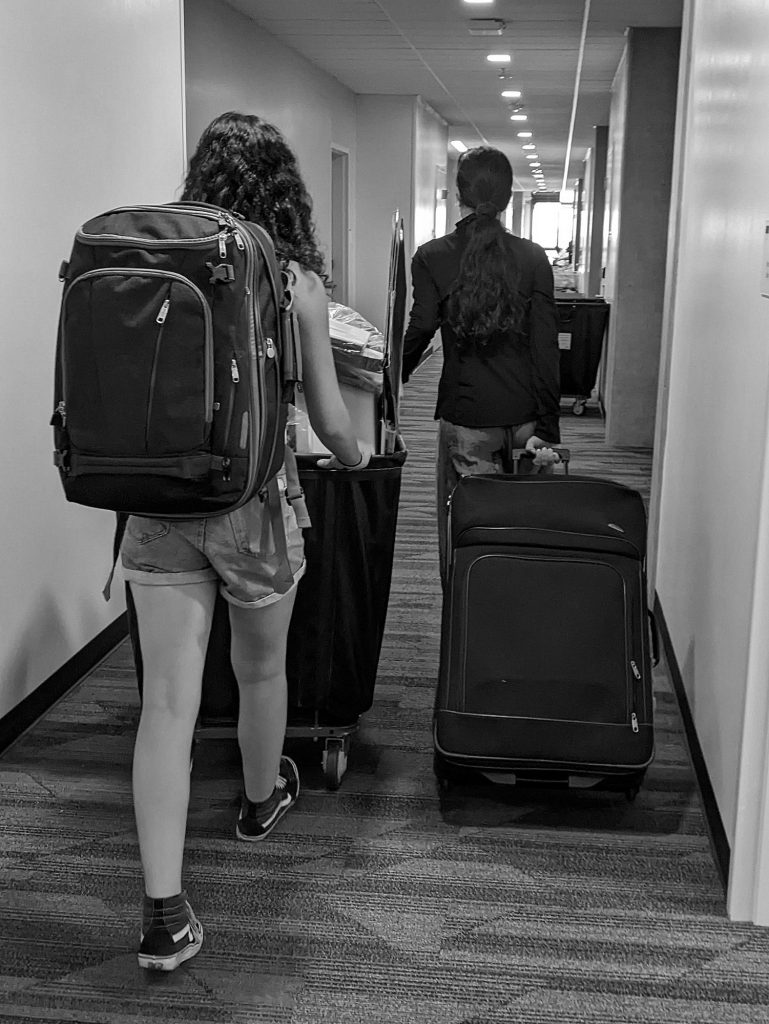 They’re both ready. I’m not sure I am, though. I am full of mixed, conflicting emotions. I’m happy and excited for them. I’m looking forward to a tidier house, and to having more time to myself. But our home also feels a lot emptier, and I miss them already. I’m also worried. Very worried.

I raised my children for this moment. For leaving home and flying on their own into the great, wide world. That, after all, is every parent’s job. I did my best to teach them how to be good humans. I made sure they knew how to feed themselves, how to do laundry, and how to live independent lives. But lately I can’t help but feel that the world into which I am sending them has shifted. It has never been a safe place, especially for women, but now it feels even more unpredictable.

I am sending my daughters out into a much warmer world, with less stable weather; inflicted by heat waves, droughts, storms, floods and raging wildfires. A world with fast-melting glaciers, rising sea levels, water shortages, and food scarcity that will probably become more prevalent. I’m sending them into the sixth mass extinction, and probably into mass migrations, too. I’m letting them fly into a world infiltrated by plastics, with micro plastics that penetrated the furthest crevasses of the planet, as well as the tissue of every living creature on it. I am sending my kids into a world in which a global pandemic is still lurking. A world where peaceful nations are attacked out of the blue, and in which the very foundation of democracy is threatened. I am also sending them out into a fractured, wounded nation, where they, as women, have less rights and less bodily autonomy than I had.

My daughters will have to deal with all the problems that every young adult encounters. They will also have to navigate a large array of thorny issues and existential threats. When I was their age, we weren’t aware of any of the above. My youth, in comparison, feels awfully cushioned and oh, so very naïve…

The visual inspiration for this quilt came on a hike I took with my husband months ago. As we were walking on the trail, we approached an electrical power pole. 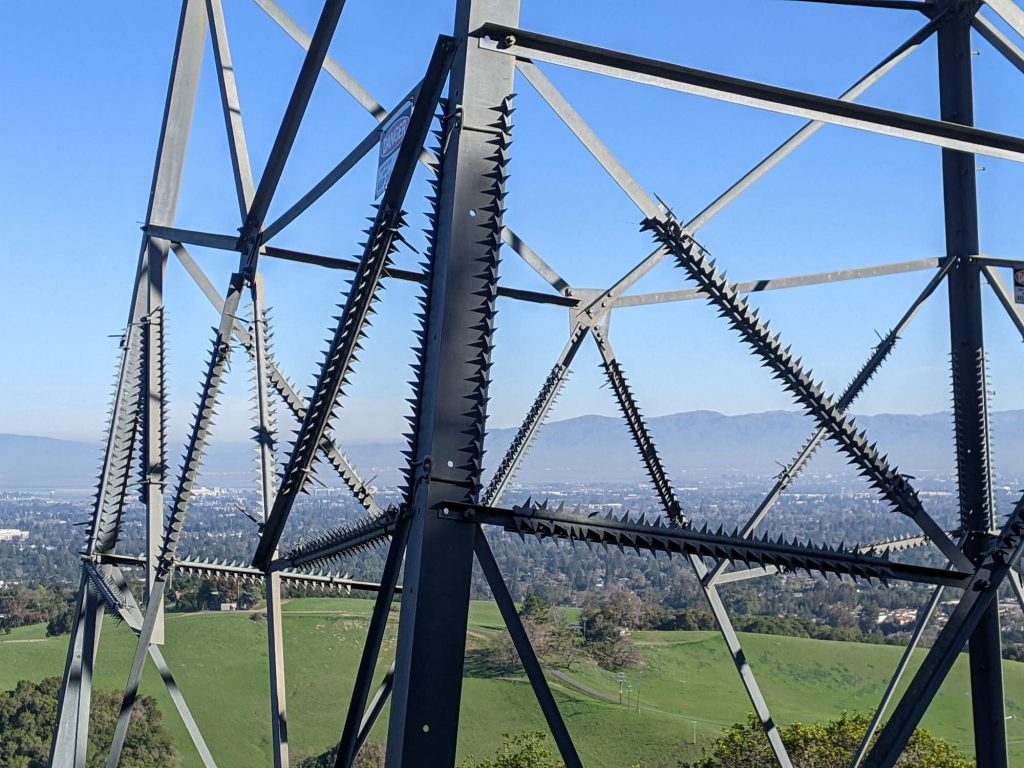 I was struck by its bold lines, that stood in stark contrast to the bright, blue skies. 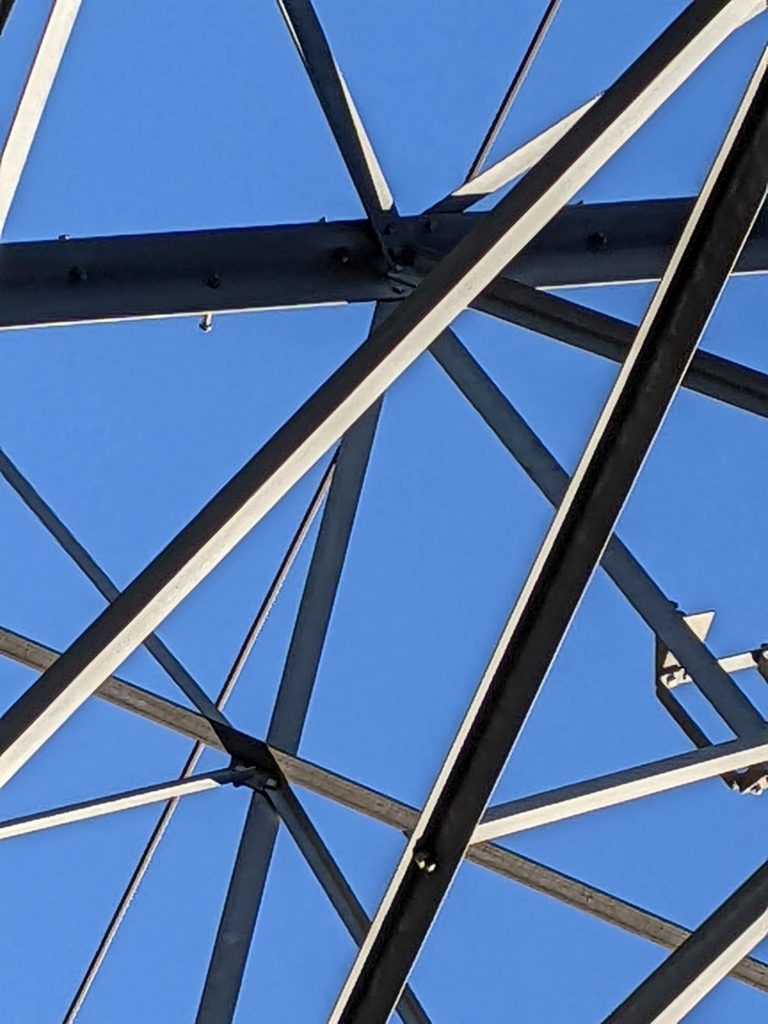 When we approached, I snapped some photos, and noticed that some of the lines had sharp “teeth” along the edges. They felt very threatening to me. 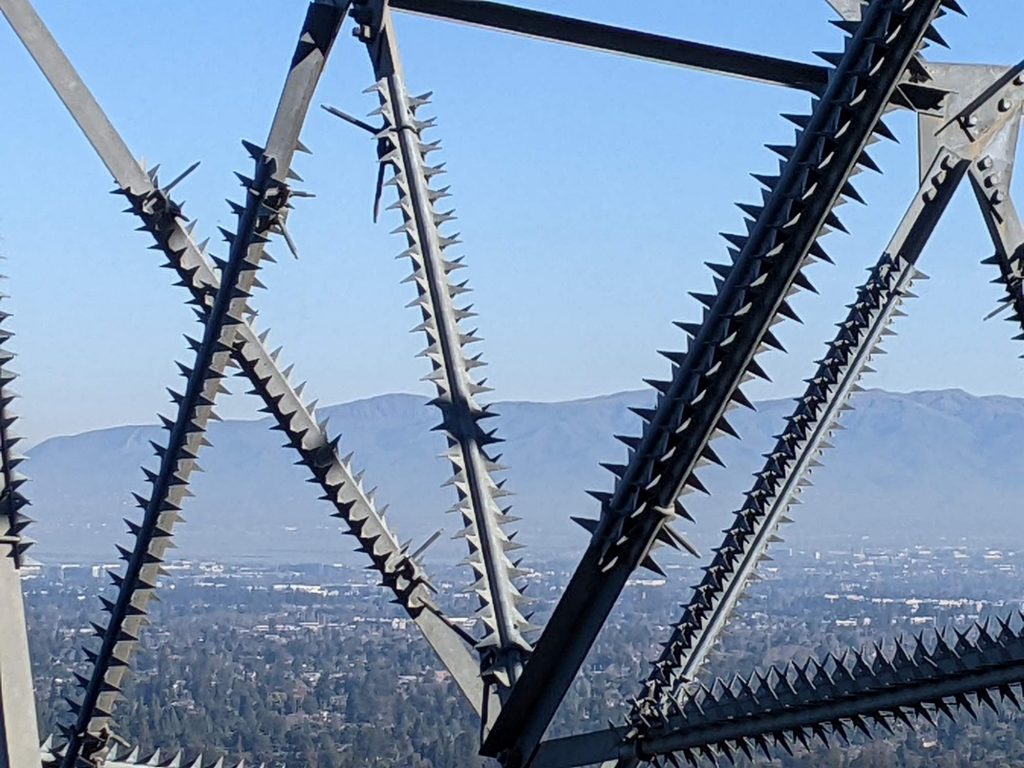 Once home, I uploaded the pictures into a file, saving them for later use.

As my daughters’ departure for college drew near, I remembered these pictures, and knew what I would use them for.

Due to the elaborate, bold design, I knew I wanted to keep the background plain. I chose red, which symbolizes the dangers of our perilous world. Then, I ironed fusible web onto the back of some black fabric. 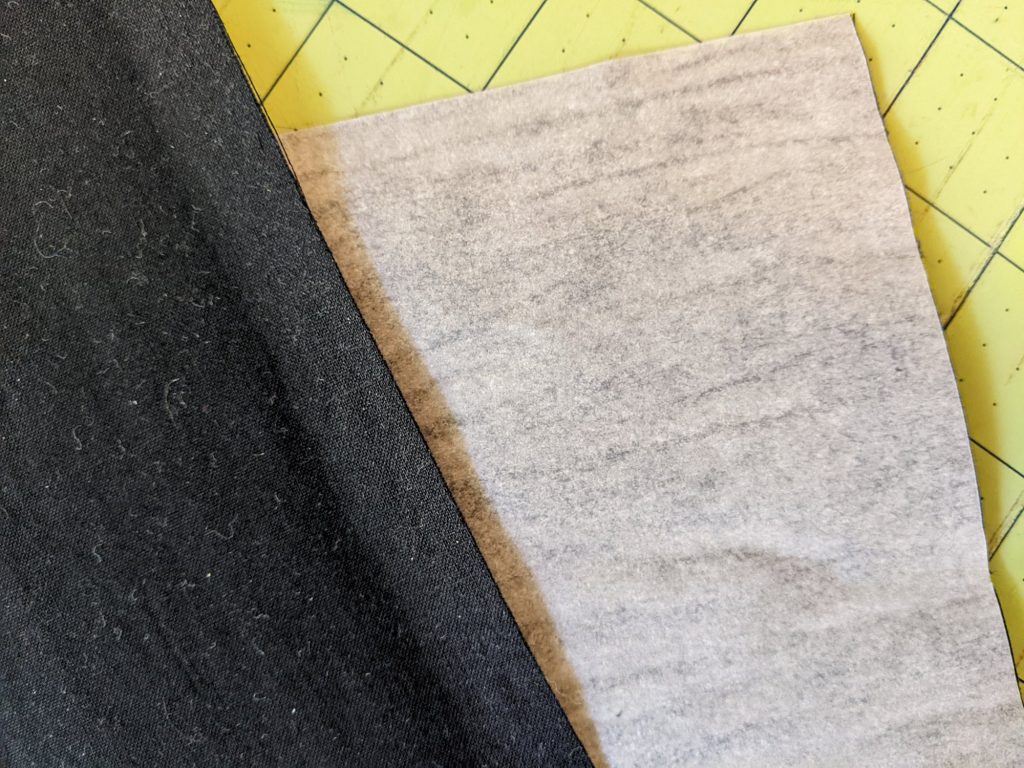 I posed for a photoshoot, but this time it wasn’t so simple. I wasn’t sure which exact pose I wanted, and so I took many different ones. After much contemplation, I narrowed the selection down to two. I printed both on paper, and cut them out. Inserting them between the lines, I tested them in my composition.

This was Version One: 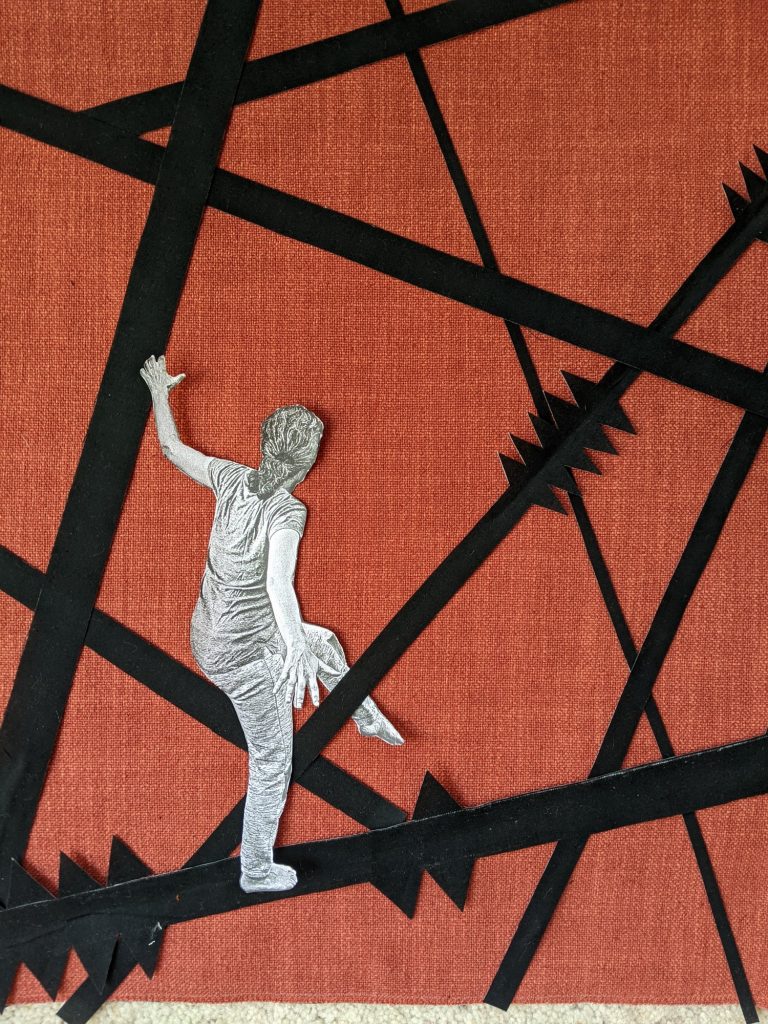 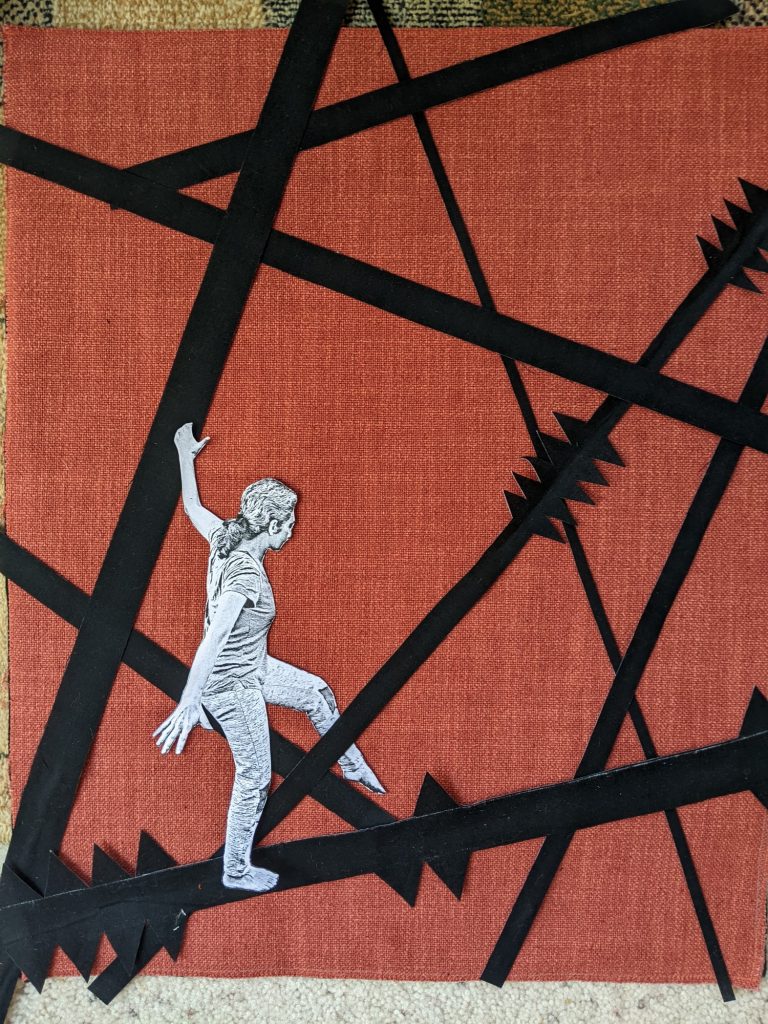 It was a difficult choice. I let it rest a few days, coming back to look at both options every now and then. Eventually, I decided I liked Version Two more.

At this point, nothing was actually fused to the background yet. The different pieces were cut but still loose. I printed the person of Version Two onto fabric, cut it out and then set to arrange the final composition more carefully. I pinned everything onto the background, then fused it down with a hot iron. The stitching took me a couple of days, and was not the most pleasurable stitching I’ve ever done. 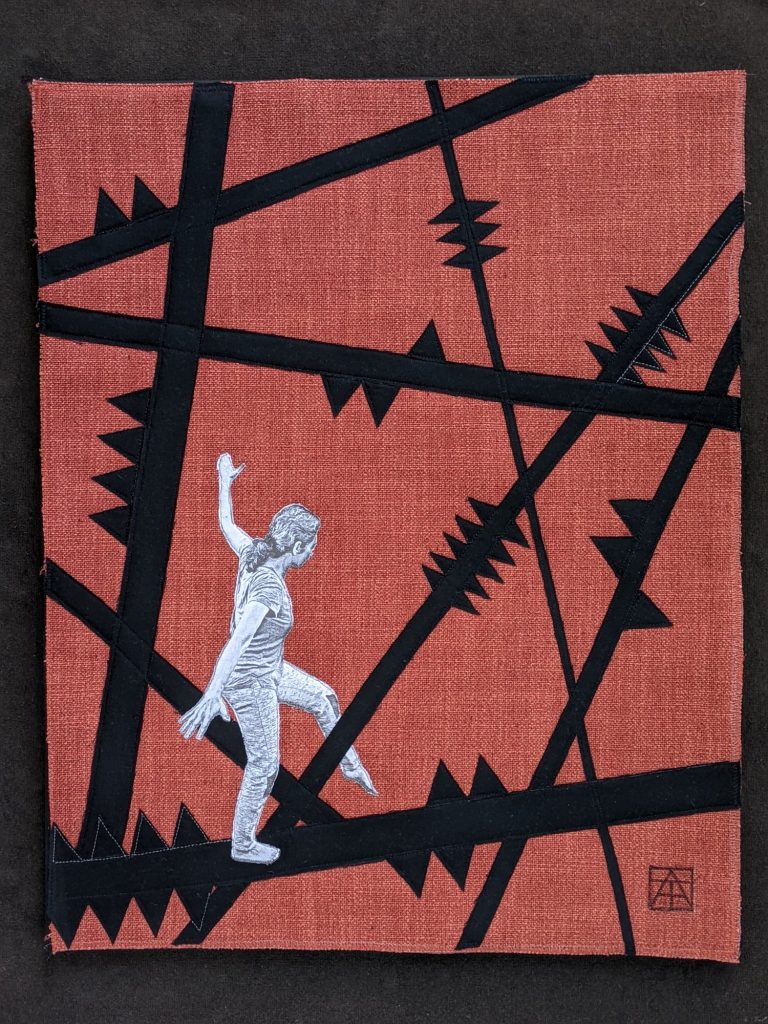 2 thoughts on “It’s a Perilous World”