My daughters got upset with me the other day because they decided that my Instagram feed was too messy. They’re probably right. I can’t ever stick to a specific color palette, or have a consistent theme. That’s partly because messiness is intertwined with my work. My head is exploding with ideas, you see. The world around me keeps providing endless inspiration. I want to try new things, experiment with different techniques, learn new skills. Even in normal times, I always work on several projects simultaneously. I start new pieces before I finish old ones. My UFO pile is huge. My sewing room is a mess.

To make things worse, the Covid Lockdown put my creativity on steroids. I usually sew mostly in autumn and winter, and much less so in spring, when end-of-school activities pick up. I hardly ever sew in summer. Not this year. Sheltering in Place with my family, now going onto week nine(!), has put me under a new routine. I divide my days between gardening and sewing (oh, and a few other domestic chores…). There are the bad days, of course, when I hardly do anything at all. But then there are the days on which I start several new projects all at once. Someone suggested this might be stress-related, and maybe it is. Better than a few other stress-relieving habits, I suppose. Still, the result is messy.

That’s why I don’t often show my work in real time. Instead, I’m trying to show it in more organized batches. Like when I shared all my insects together, and all the Textile Poems, even though some were created around the same time and out of order.

A short while after the pandemic hit, I decided this was a great opportunity to try new things. One of the projects that have been on my to-do list for years was making Ann Wood Handmade’s dastardly owls. I’ve been a great admirer of Ann’s soft owl sculptures for years. I loved their scruffy air and spunky attitude. I bought the pattern shortly after she published it, some two or three years ago, but despite great intentions, never found the time to try it. Not until now, that is.

A few weeks ago I pulled it out of my pile and shook the dust off of it. 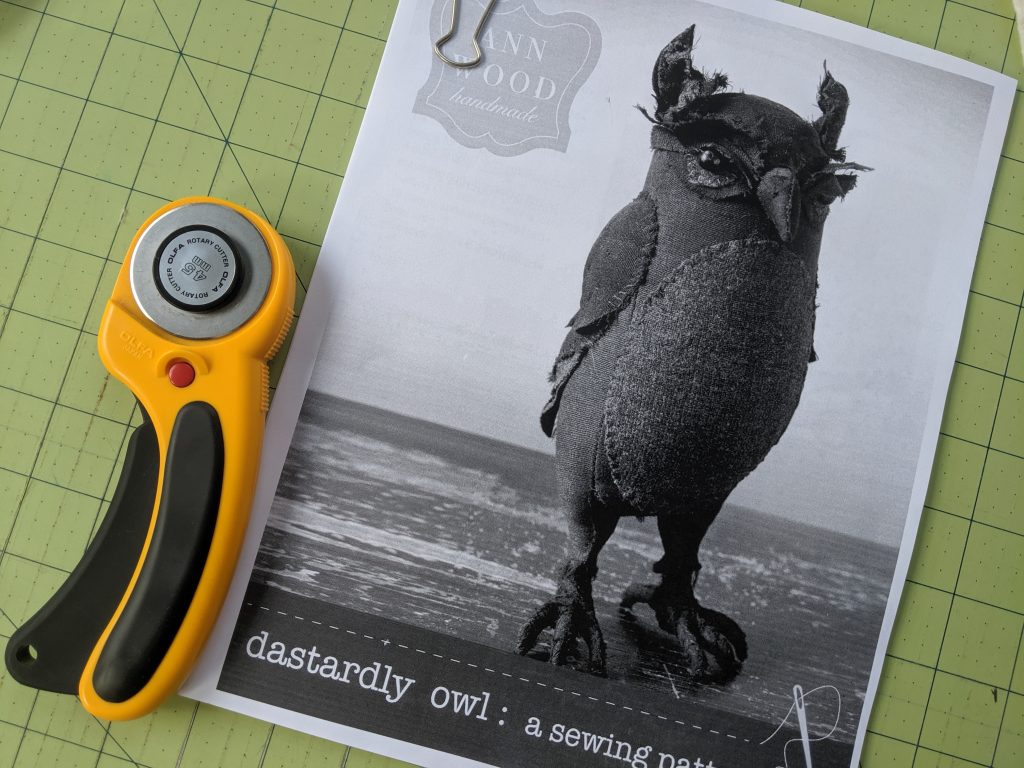 I then dove into my scrap pile, and started working.

So far, with the exception of bags and other functional pieces, I’ve mostly made two-dimensional art. Oh, and the one troll, of course. But I have little experience creating three dimensional dolls. That might explain why, on my first try, I ended up with two tails instead of one. One was on the back, where it should have been, and the other … on the front… Or perhaps I should just blame it on Corona stress… Either way, I did manage to fix it, somehow, luckily.

Here is my first try. I’m quite happy with how he turned out. 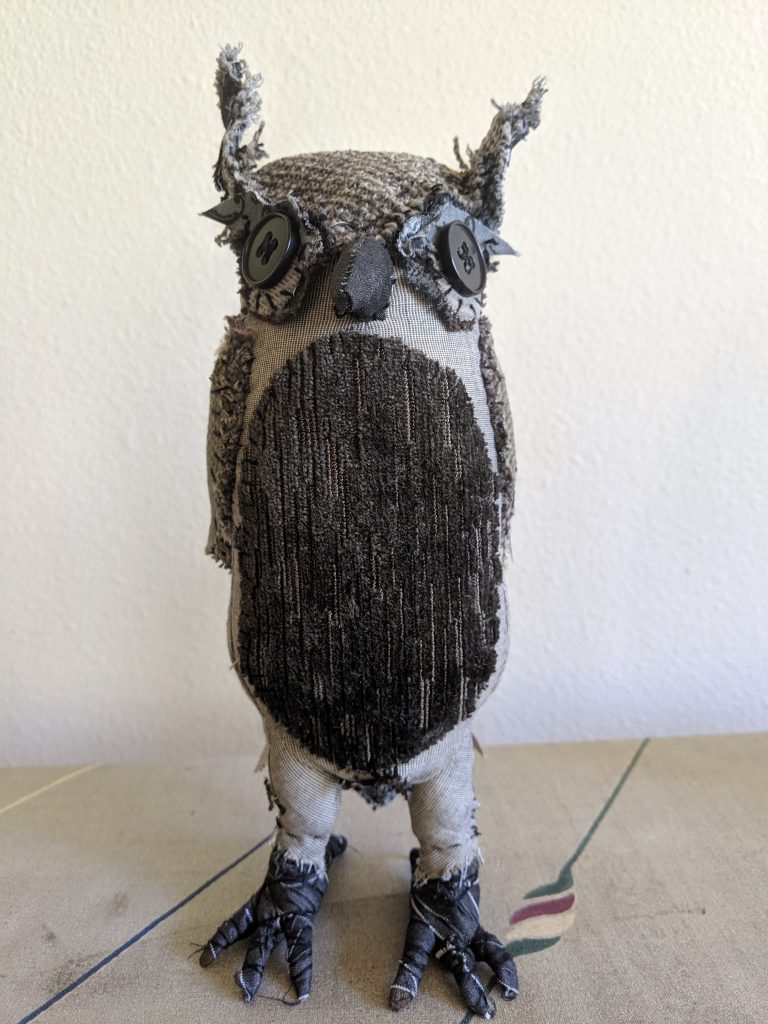 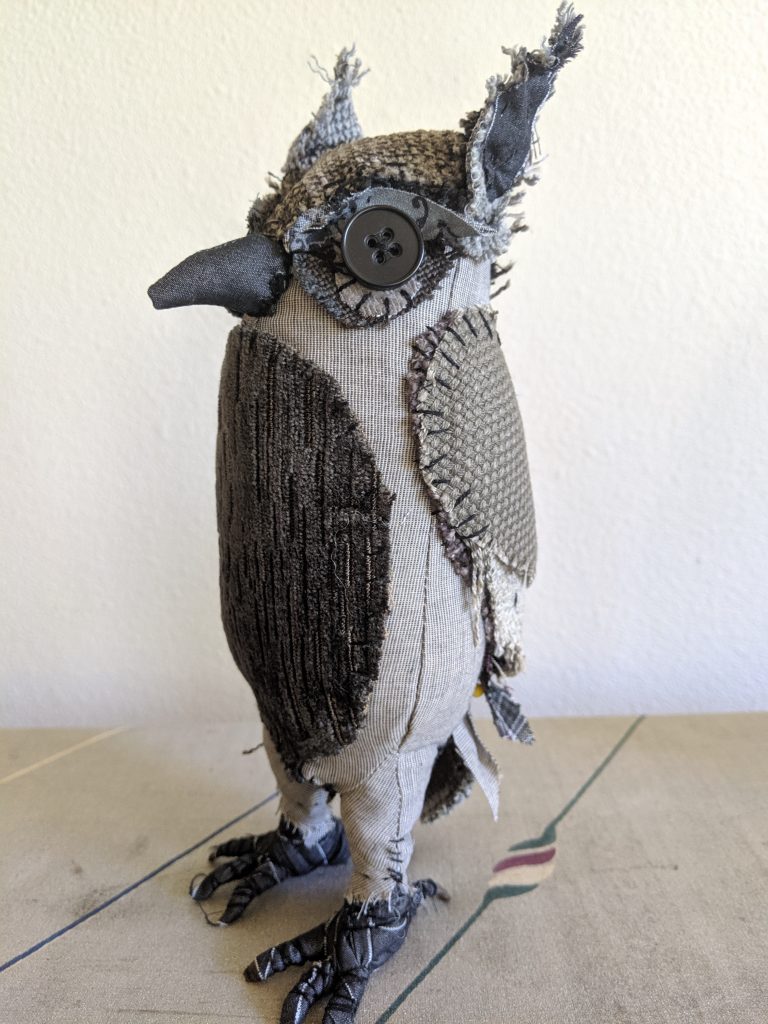 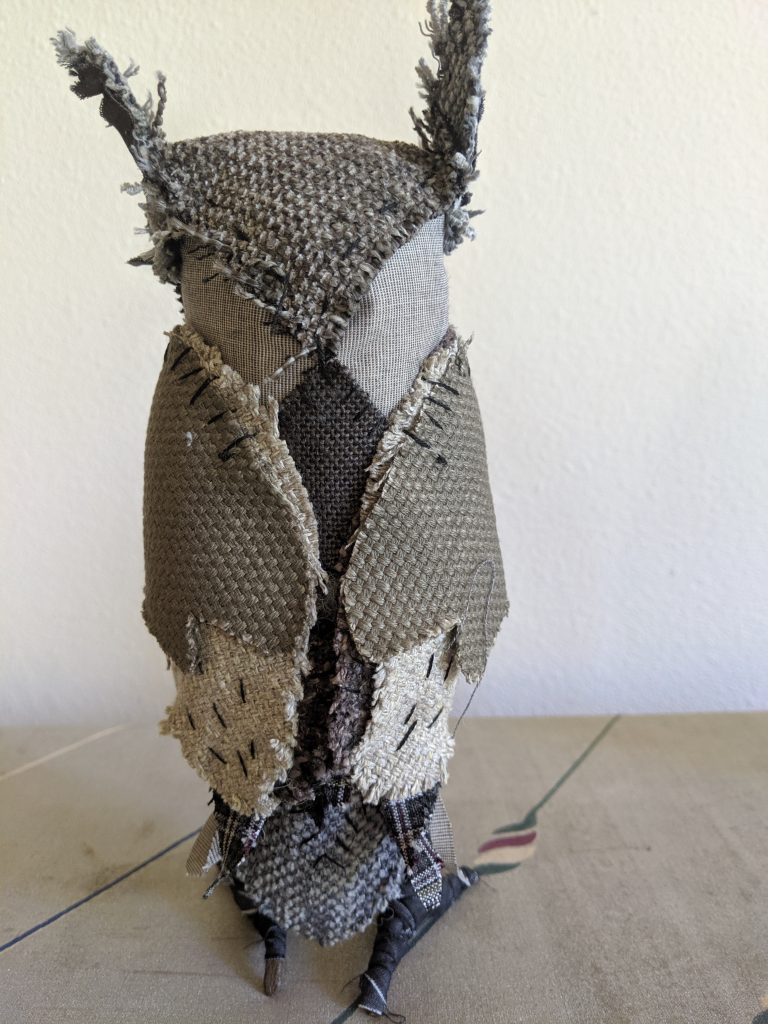 My son adopted him less than five minutes after I put in the last stitch, by the way, so I consider him a success.

Of course, I had to try again, to figure out what went wrong the first time and correct my initial mistake (the one with the tails, that is). This time I chose my favorite color, because what can be better than a purple owl??? I paid closer attention to the instructions, and ended up with a single, perfect tail. 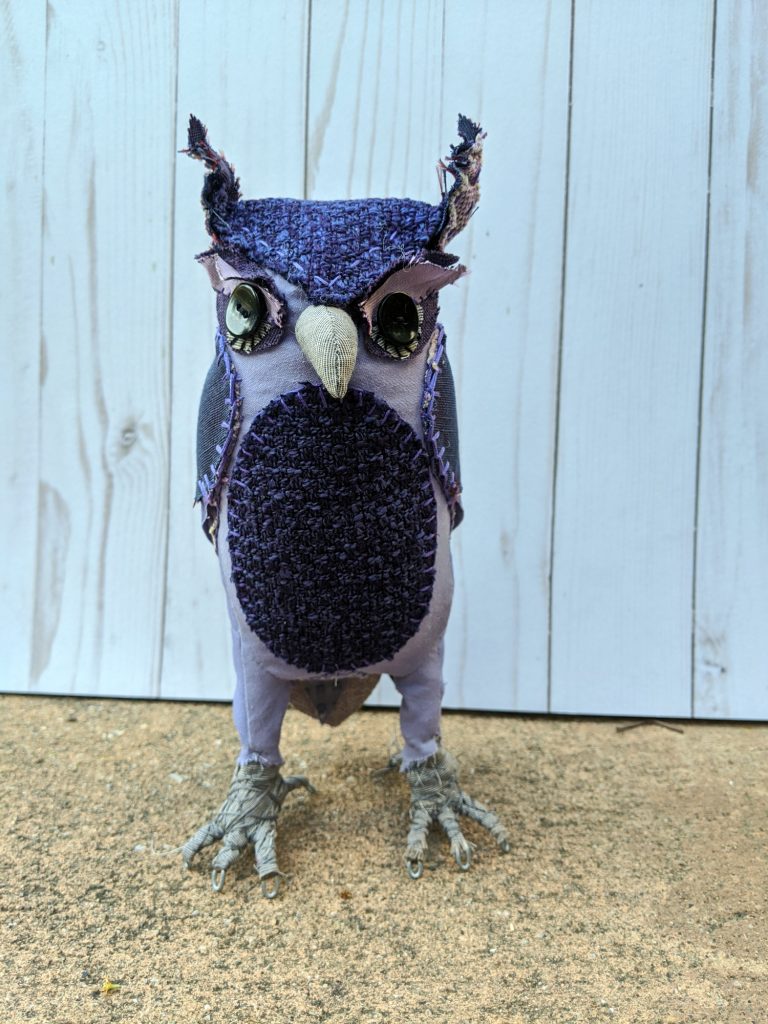 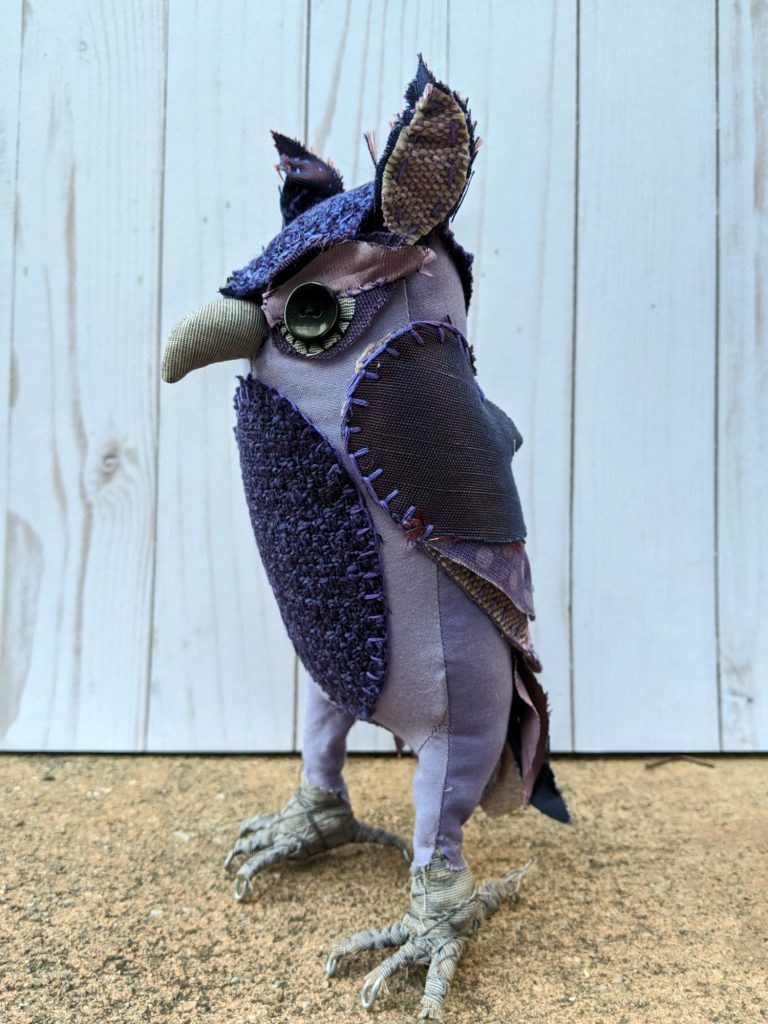 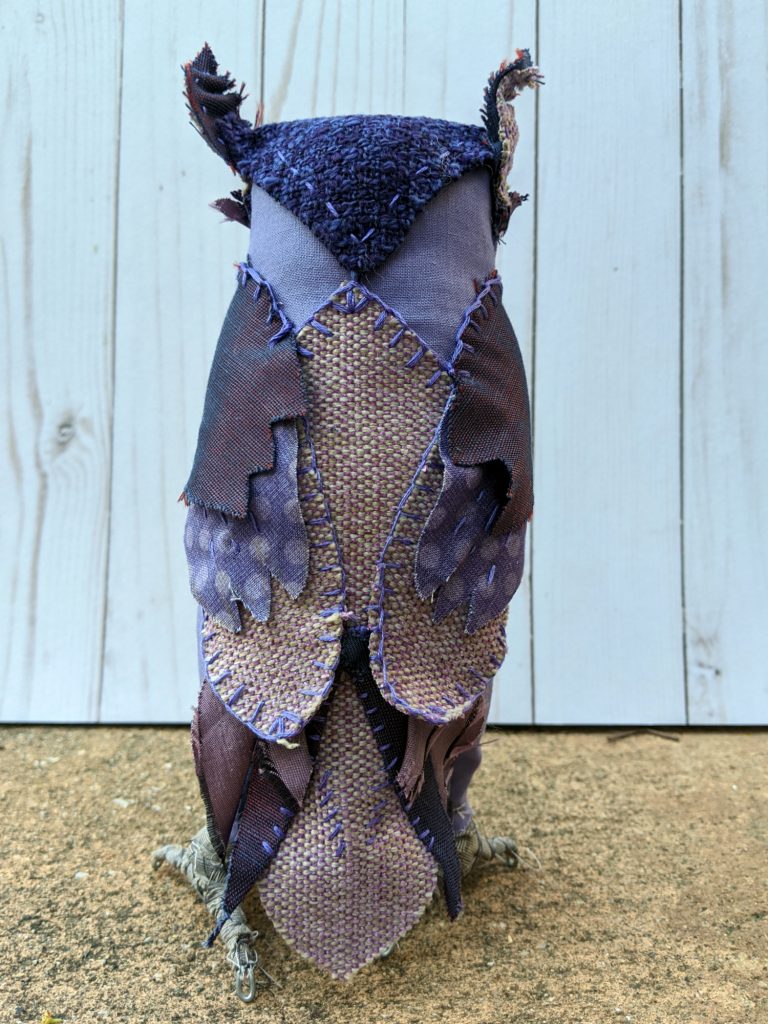 I am keeping him for myself.

Here’s what I learned about making soft owl sculptures:

Putting My Own Spin on Faux Taxidermy Owls

I liked my first two owls, but one thing disappointed me about them. When I saw pictures of Ann Wood’s owls in the past, always photographed on their own, they seemed quite large-ish. But the pattern made for rather small beauties (about 8.5″ tall). Unsatisfactorily small. 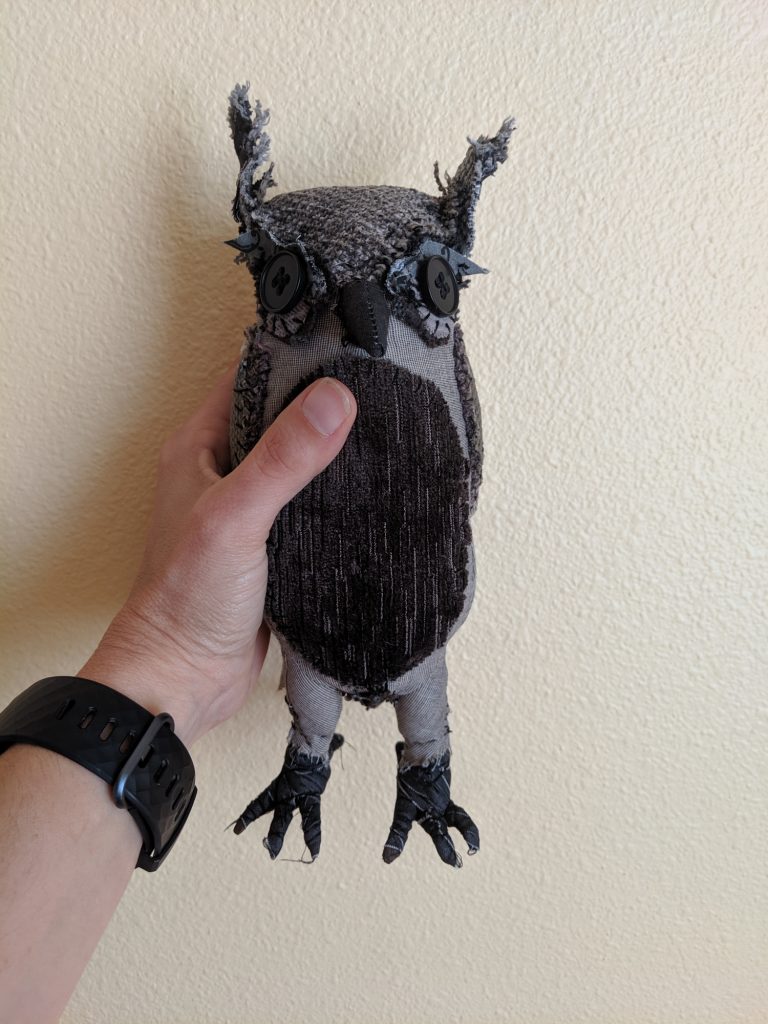 So, for my third try, I had to make a few changes. I enlarged the pattern considerably, and put a little boro spin on it (if you look carefully, you might even recognize some of the fabrics). I used unusual vintage buttons I once took from my parents’ stash. The result? 12″-tall Yoshihito, Shogun of the woods. A benevolent fella who could be quite fierce when crossed! 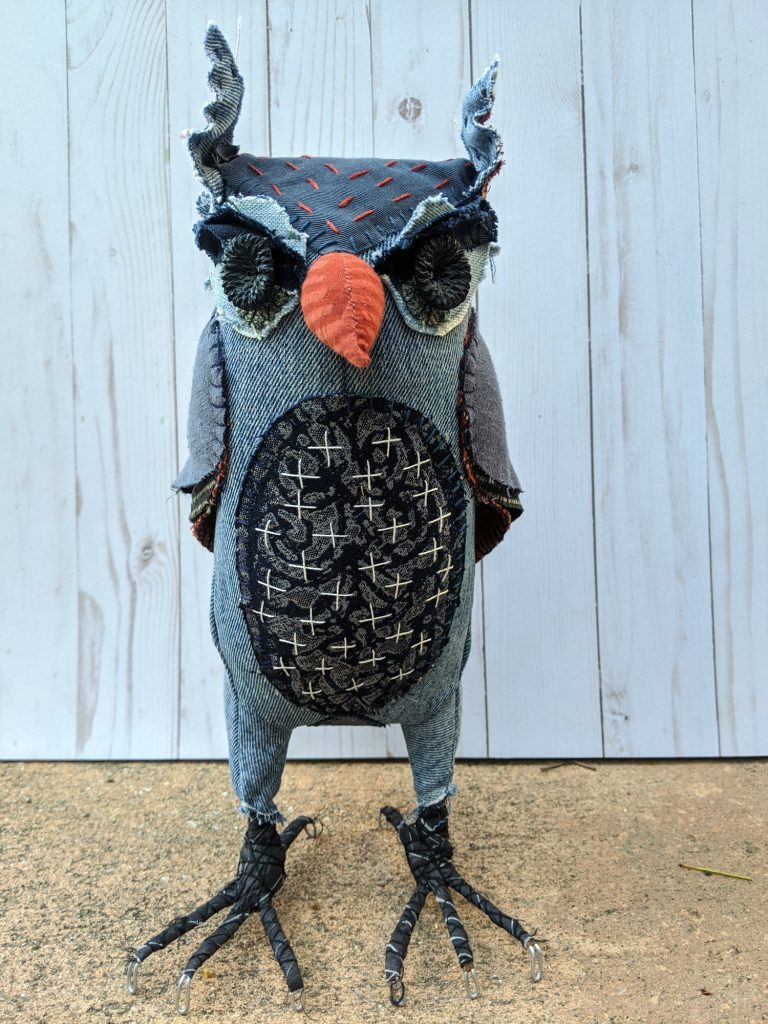 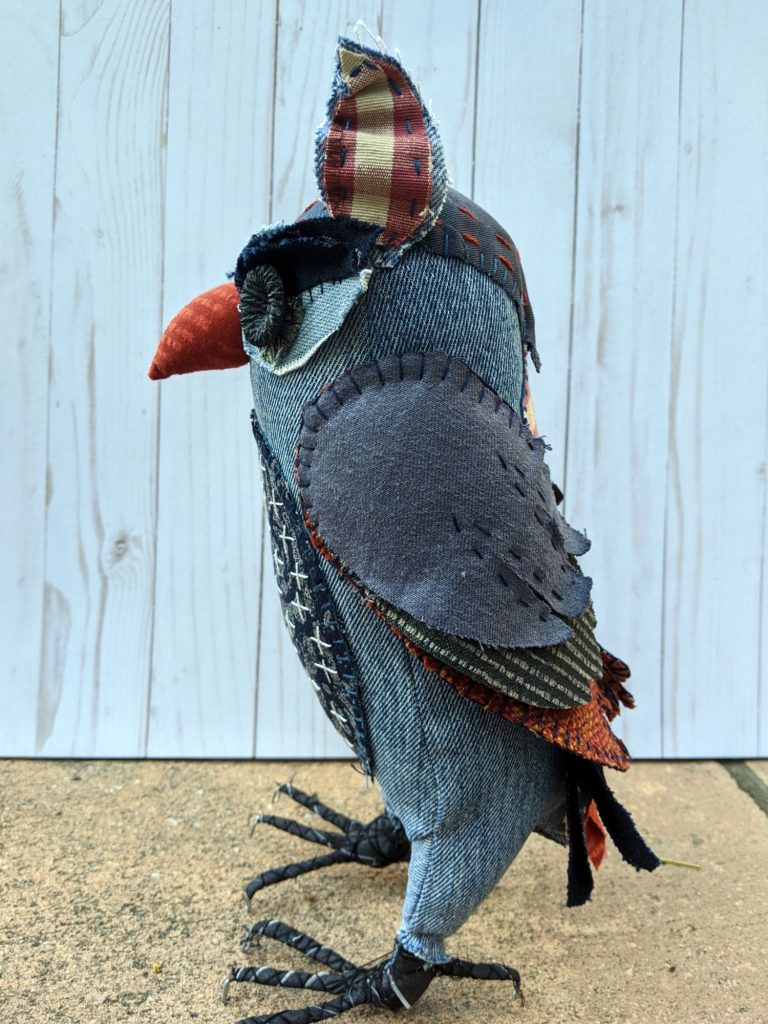 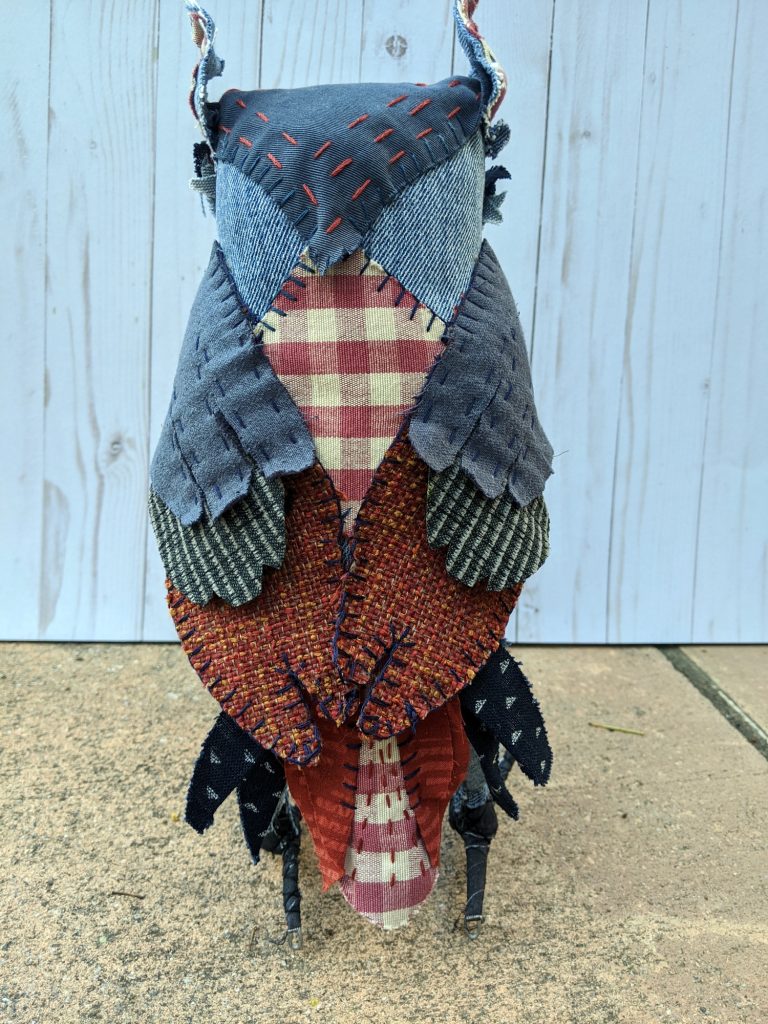 Yoshihito is available for adoption right here on my website, and also in my Etsy store.