2019 just ended. For me personally, it wasn’t only the end of a year or of a decade, but also the end of an era.

My year started well, with a fun trip to Cambodia and Thailand followed by a happy celebration of my mom. Then, in March, my father passed away unexpectedly.

The death of a beloved parent is a life-changing event. For months, it didn’t seem real. It still doesn’t. Everything I did before my dad’s passing came to a screeching halt. For a long while, I could hardly function. Simple tasks were overwhelming, with grief sneaking up in the most unexpected moments. I didn’t find the energy to be creative.

My father passed away exactly half-way through my Calendar Quilt project. I started this self-imposed challenge in October 2018, with the intention of making one mini-quilt for every month of the year. In the few months following my father’s death, those monthly minis were the only creative thing I did. Every month, I forced myself to design one small quilt. Getting started was hard, but once I began sewing I miraculously felt better. It felt good to touch textiles, with their soft, comforting textures. Hand stitching slowly and quietly was meditative. Concentrating on the simple act of pushing needle and thread through fabric made me forget other things, if only temporarily…

By working on these mini quilts, I slowly stitched my soul back together. 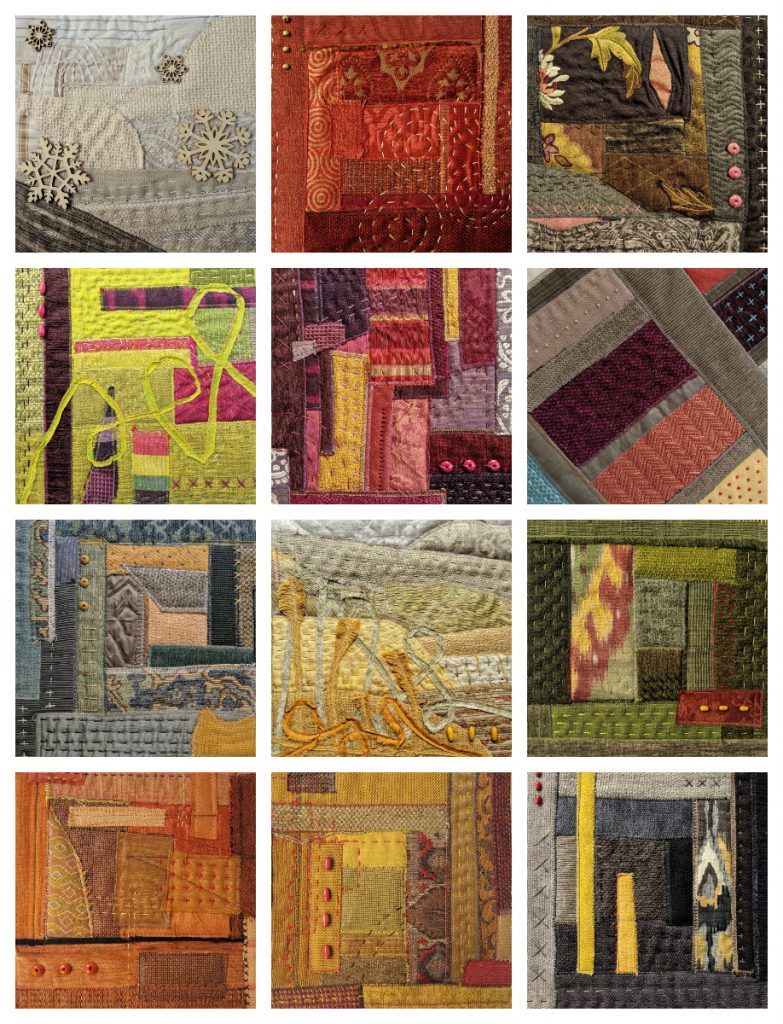 Once this series was done, I didn’t want to stop stitching. I started working on a new quilt series, which I tentatively called the Color Explosion Series (a name I later changed). This new series allowed me to play with colors and textures to my heart’s content. No excuses needed. And it allowed me to stitch until my fingers hurt.

The more I stitched, the more my creative juices started flowing. I was finally able to get back to some of the projects I started before my dad passed. I finished a batch of bags, then a bunch of journals. A family of noisy raccoons inspired me to make a small raccoon quilt.

Then, at the end of October, I was called for jury duty. For one week my life was put on hold, as I had to go online every few hours to check my status. In that week I decided to use up two large ziplock bags full of small, oddly-shaped scraps. I started a series of 5-inch-square stitch-meditation sketches. 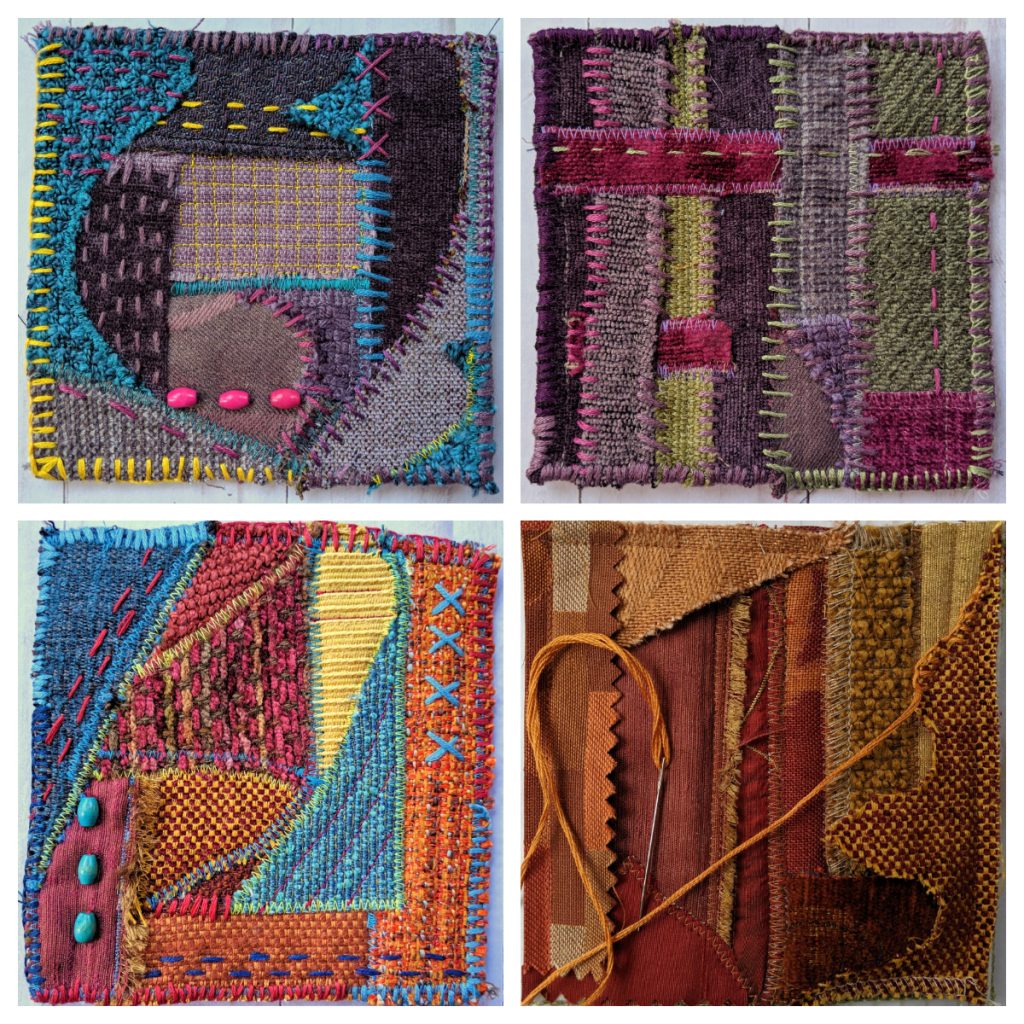 On the last day of that week, one fuchsia pile of scraps refused to become a sketch, and forced me to create a zipper bag instead. That was the beginning of a magical month of creativity. It resulted in fourteen artsy pouches, which I gave as holiday gifts to women I care about. 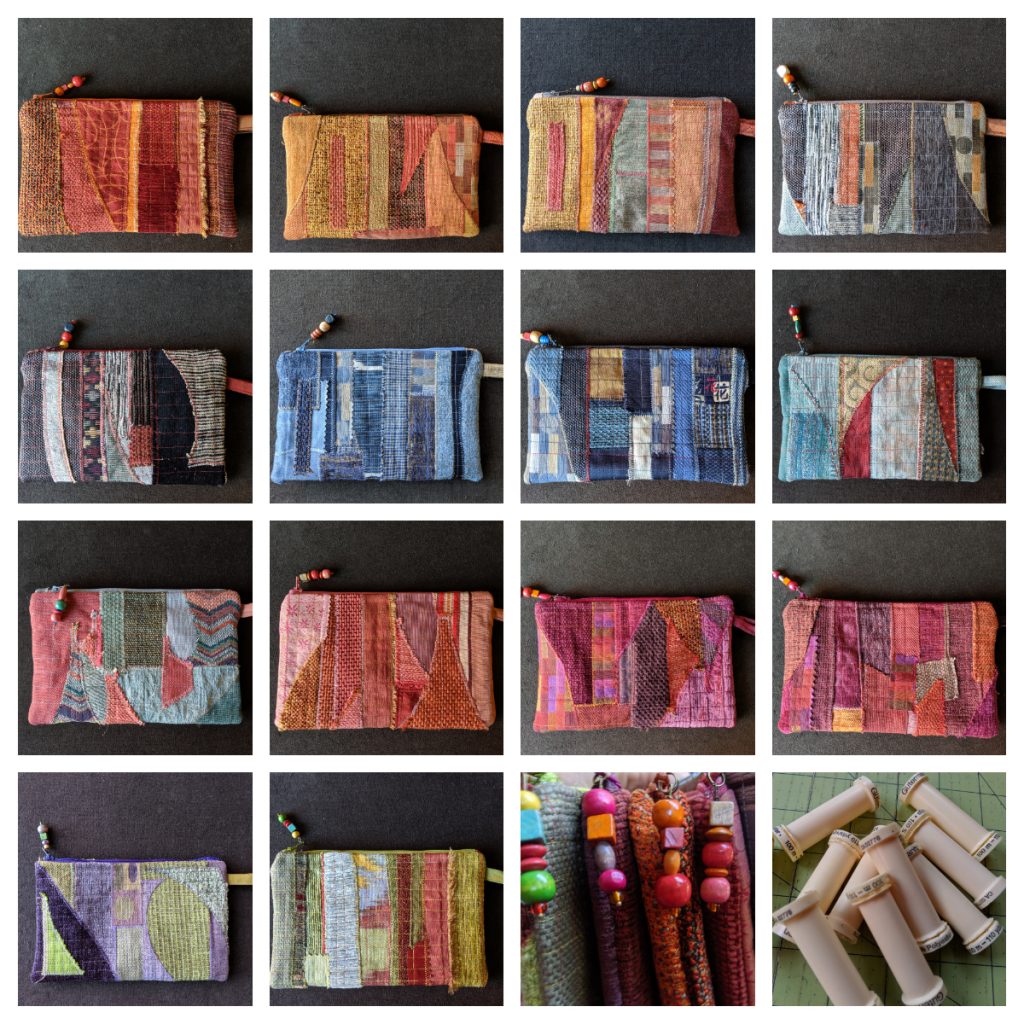 My piles of unfinished projects haven’t shrunk at all in 2019. I haven’t finished most of the works I started in 2018 (or before). In fact, I haven’t accomplished a whole lot. I really needed time to mourn, however, and the mental space to rearrange my shattered world. Along the way, my priorities shifted. I had a lot of time to think. Where this will take me remains to be seen…

I ended the year with a major cleanup of my ever-messy sewing room. Although I didn’t go into every shelf and drawer, I managed to bring it back to a functional condition. It’s now ready for a new year of creativity.

Wishing everyone a Happy New Year! I hope 2020 will bear only good news, to each and every one of us, and to the fragile world we live in.