Last time I wrote about our trip to Peru, I stopped in Lake Titicaca. But there is more! When we went to the lake, we took a day-long bus ride from Cusco. The tourist bus stopped several times along the way, offering mini-excursions. It was interesting, for a bus ride, but unremarkable. After our visit to the Floating Islands and our home stay on Amantani Island, we decided to take the train back instead. We didn’t expect much from the trip on the PeruRail Titicaca-Cusco, also known as The Andean Explorer. 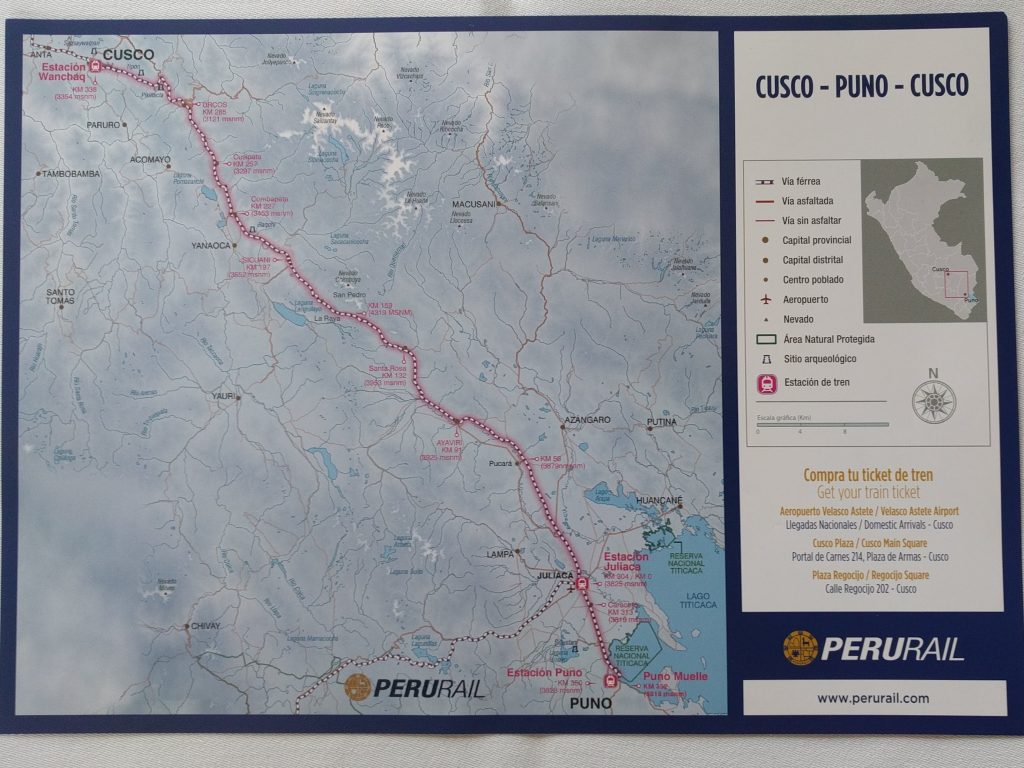 Twenty-something years ago, I’ve ridden several “luxury” trains in China. I expected the train in Peru to be something similar: vinyl benches, crowded cars, a chicken or two roaming about, and a cart with unappetizing food passing along every couple of hours.

From the outside, the train was undistinguished, except that the crowds I was expecting didn’t materialize: 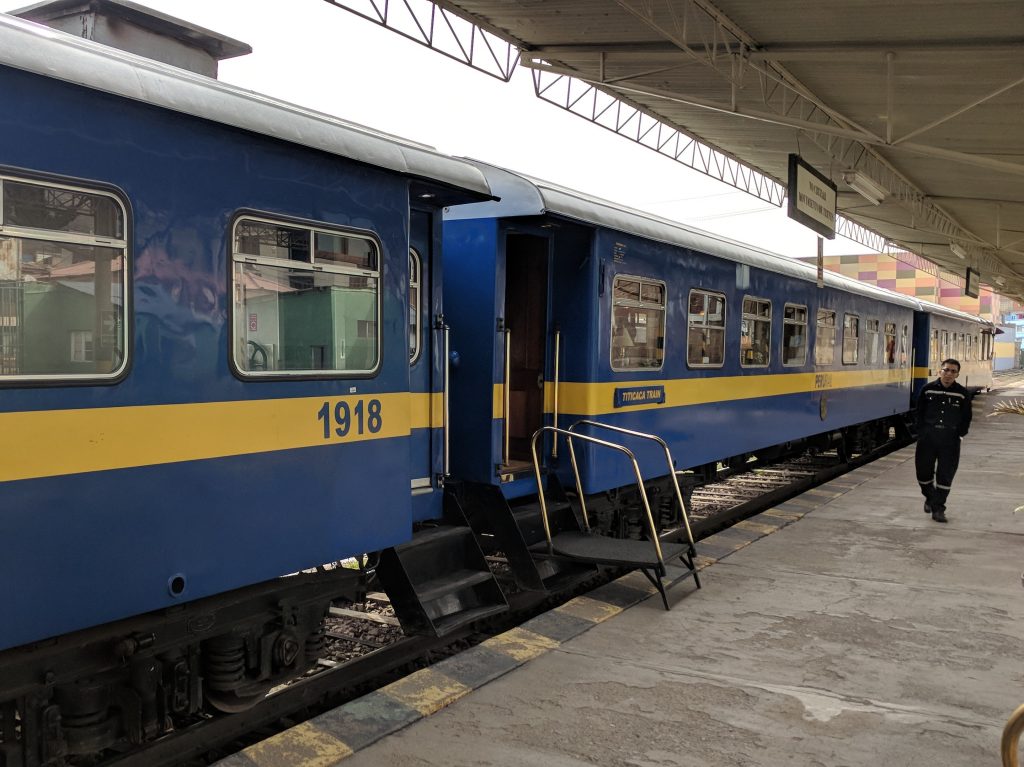 But when I got on, instead of a Chinese sleeper train, I found myself on the Orient Express! 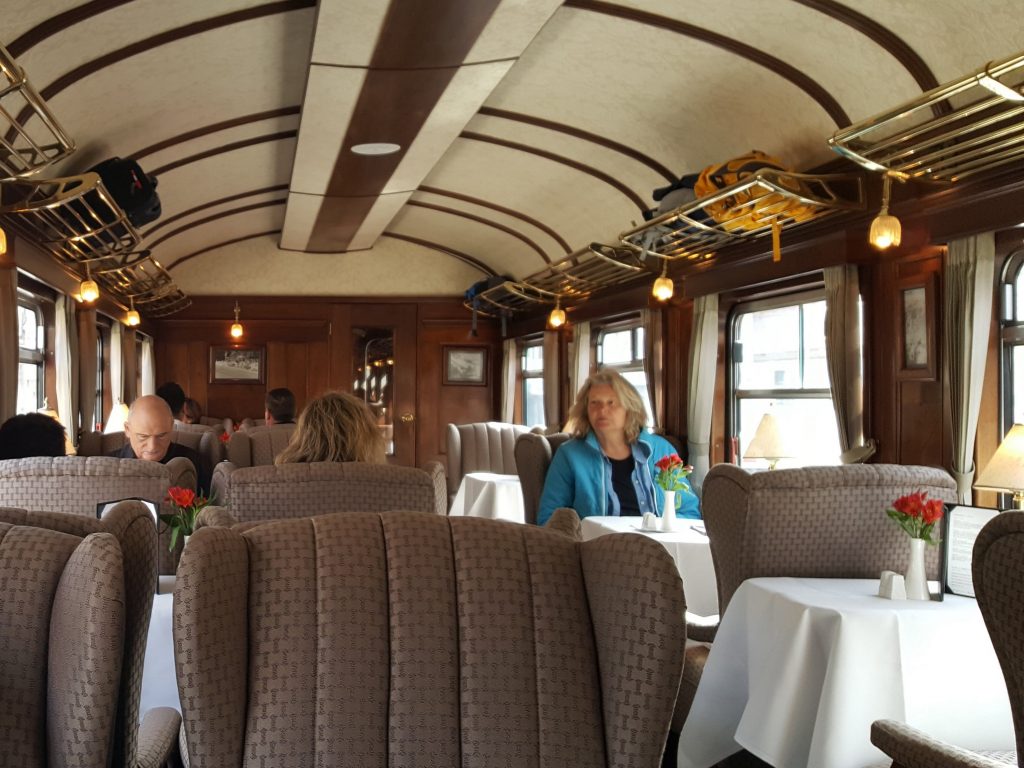 Imagine my surprise and shock when we were lead into a beautiful, bright car, and seated in wide, comfortable armchairs set around white-tablecloth-covered tables! My kids got their own table, while my husband and I had our own. An unexpected mini-date that included a vase with fresh flowers on the table between us! My mood, which was pretty sour following an early wake-up call, improved drastically and instantaneously!

Let me give you a tour of the Orient Express of the Andeas:

The train had three passenger cars: A Dining Car, A Bar Car, and an Observation Car.

The dining car, in the above picture, was where we were originally seated. There were less than thirty five of us (the allowed maximum): tourists from all over the world. Throughout the ride it felt like staff members outnumbered us.

The Bar Car had more armchairs, arranged two by two around little round tables. 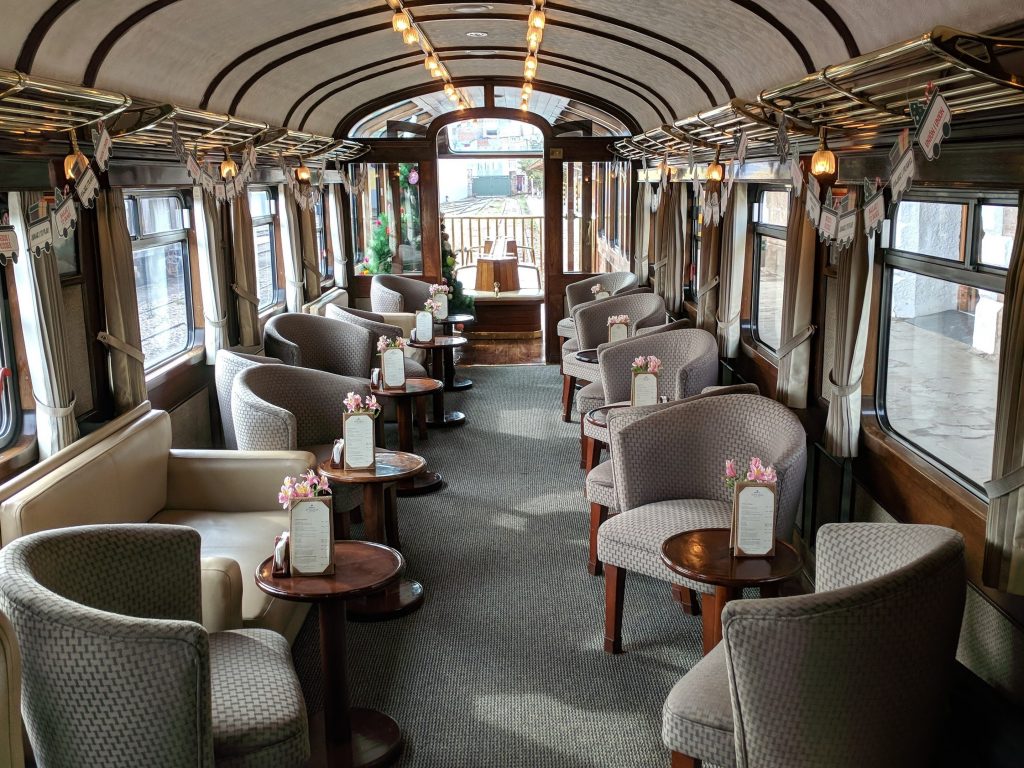 In the corner it had a fully-equipped bar: 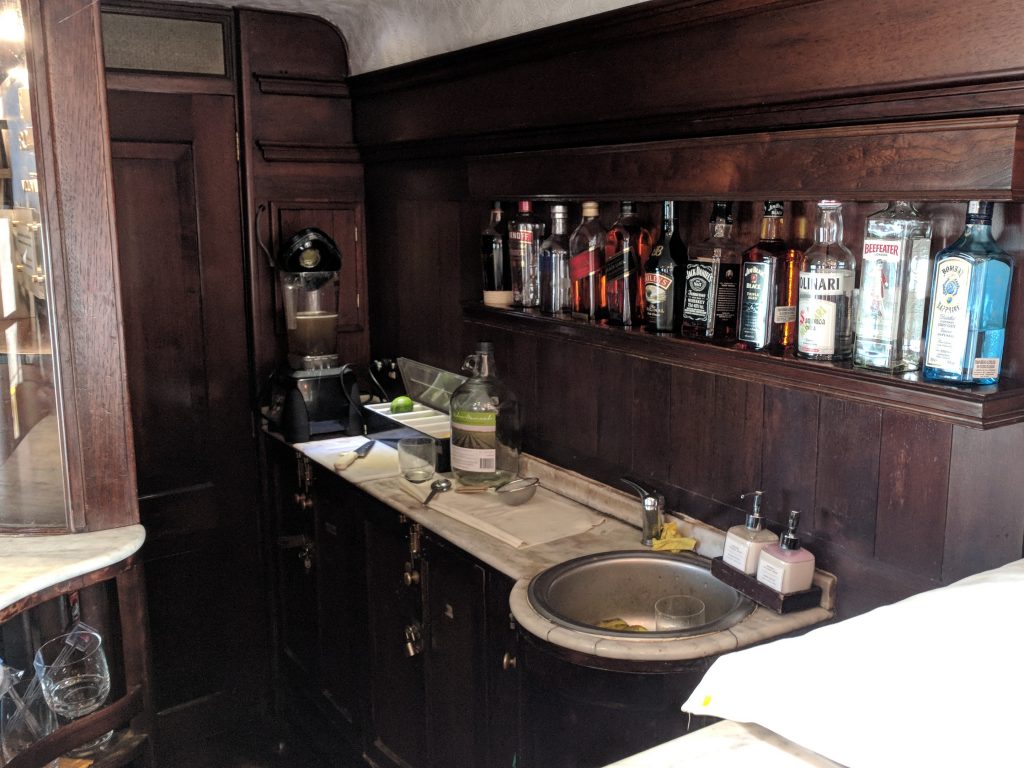 The Observation Car had long benches in the middle. It was only half covered, with big windows all around allowing a panoramic view. Since it was Christmas, it also featured a tree in one corner. 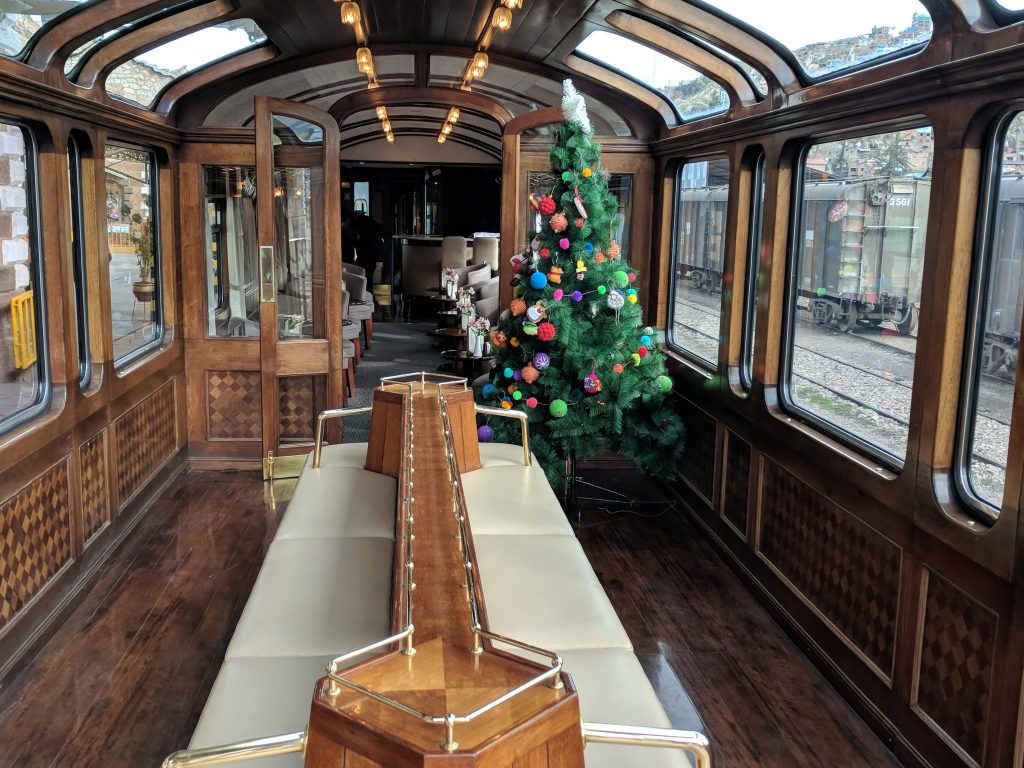 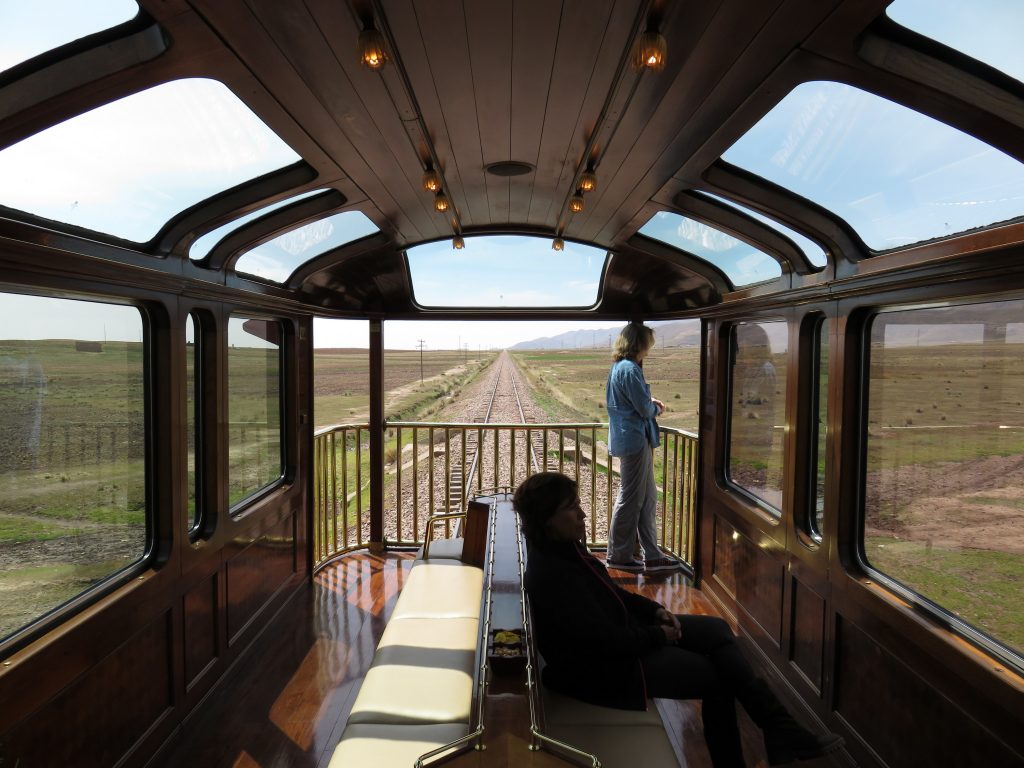 I don’t usually show you pictures of bathrooms, but even the toilet on this train felt luxurious: 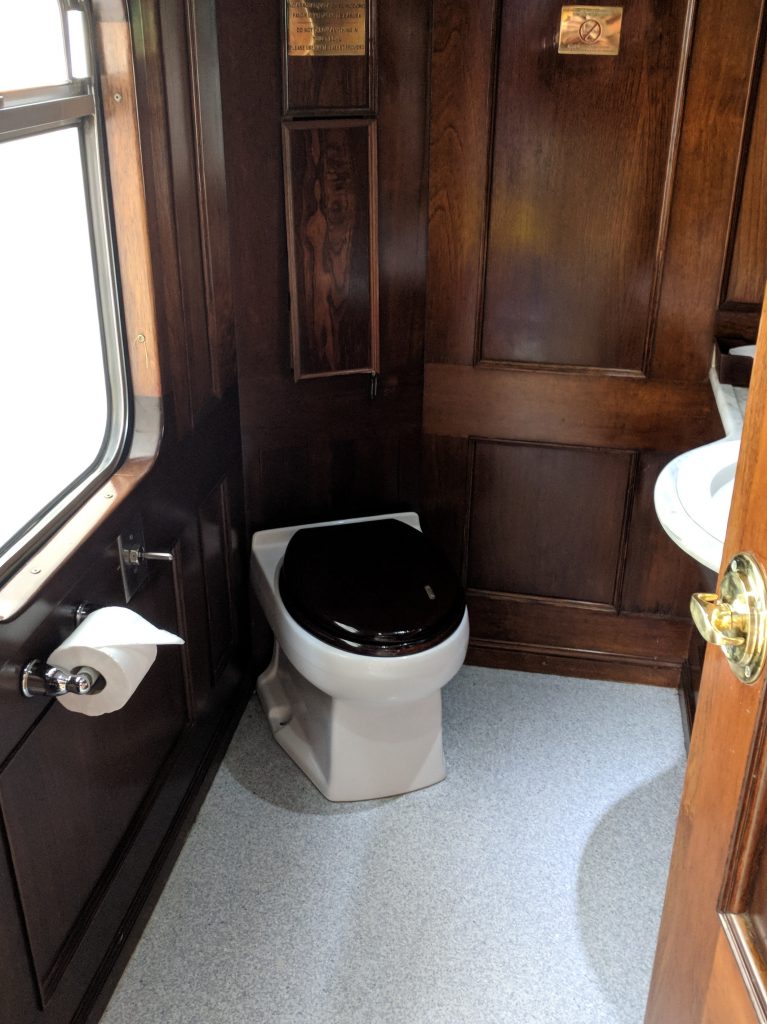 The looks and ambiance of the train greatly lifted my spirits, but it turned out to be only the beginning. Without knowing it, we were about to embark on the train-ride of a lifetime!

Shortly after the train started moving, the stuff distributed snacks and drinks. Alcohol in the morning does wonders to your mood! Needless to say, the ice between us passengers was broken fairly quickly. Tourists intermingled, chatted and became friends. 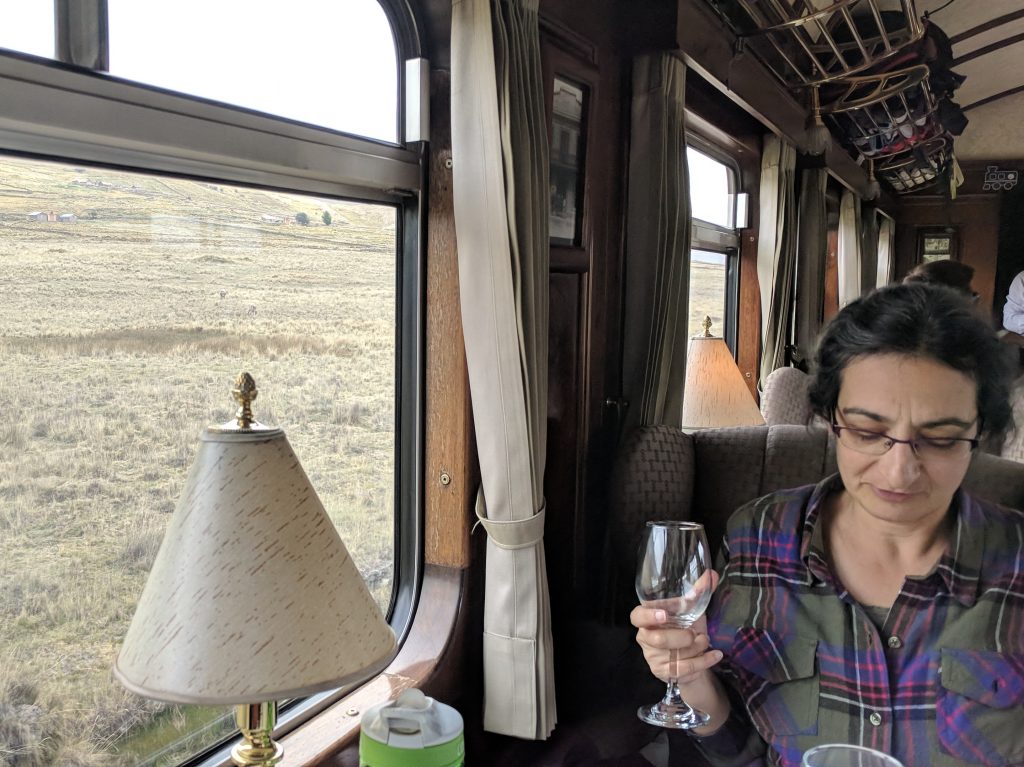 A couple of hours into the ride, a live band began playing Peruvian music in the Bar Car. Soon, we got to see some Peruvian dances as well: 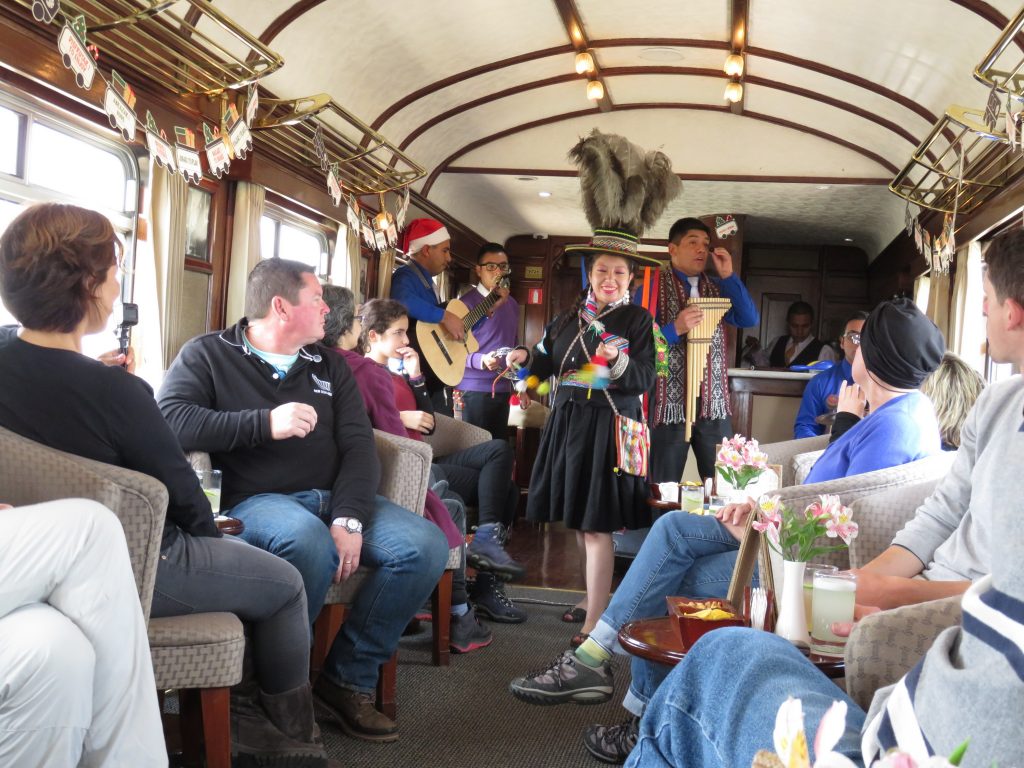 This was followed by a fashion show, with a male and a female models showing us some high-end Peruvian alpaca fashion: 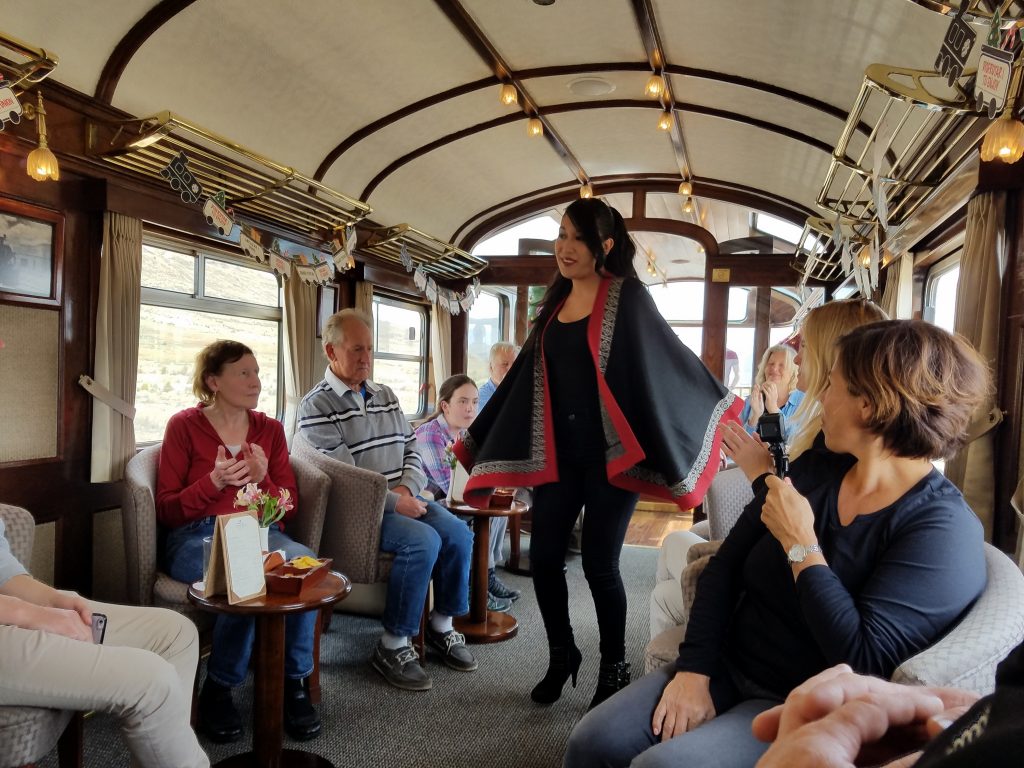 In the meantime, while we were greatly enjoying ourselves on the most luxurious train I’ve ever been on, the real Peru passed by outside our windows: arid grasslands sparkled with mud huts: 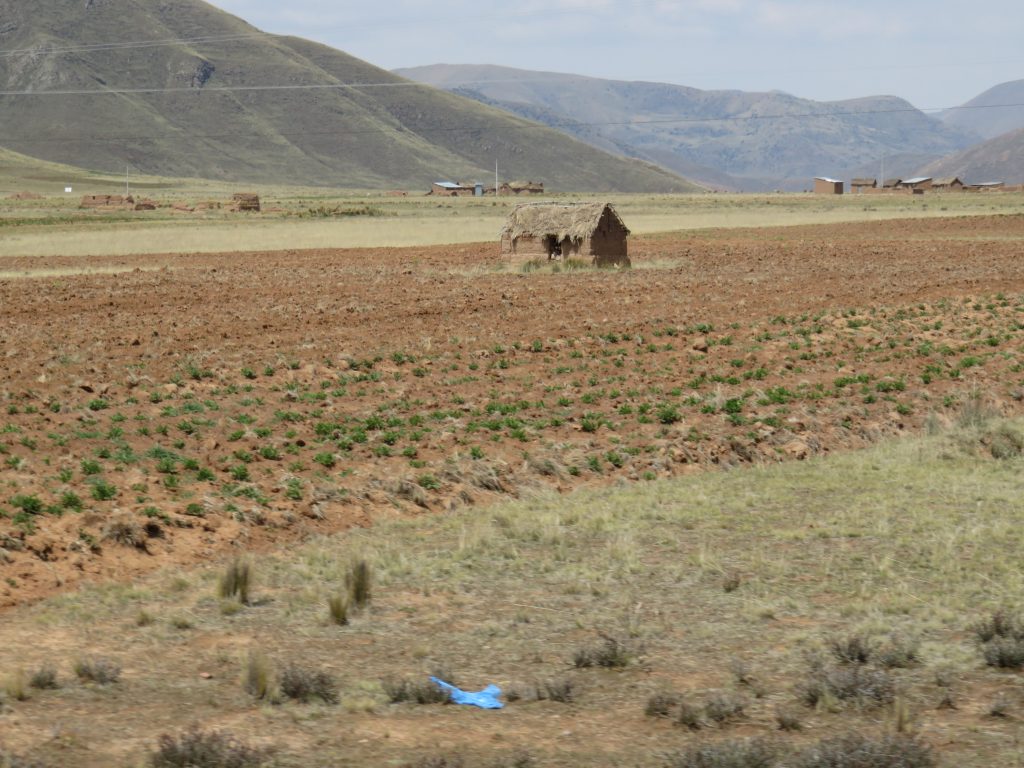 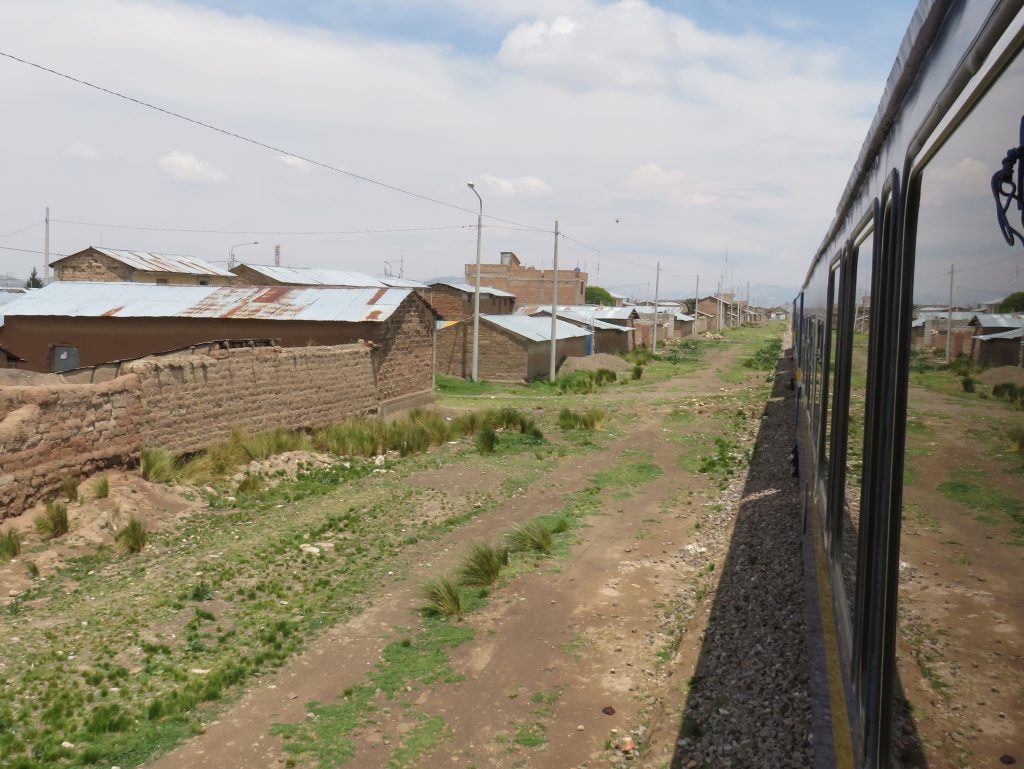 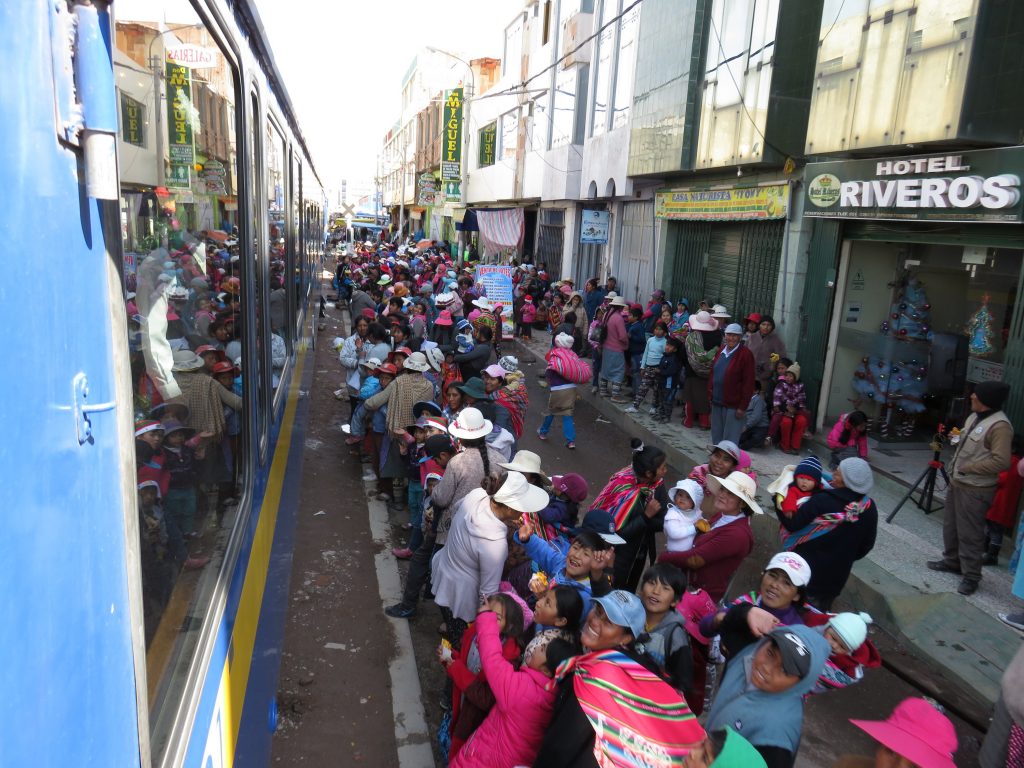 And the most remarkable of all: a bustling urban market set along the train tracks! Since there are only two trains a day, with predictable schedules, people had booths and merchandise set on the tracks. They removed everything when the train approached, then put it back up the second it passed: 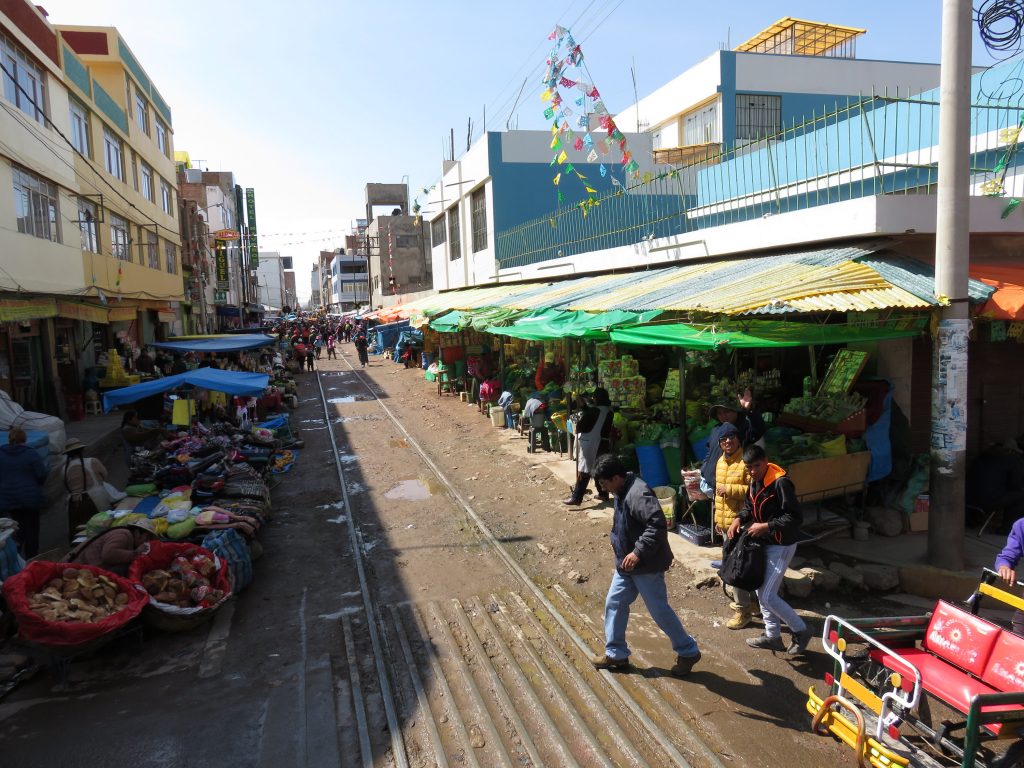 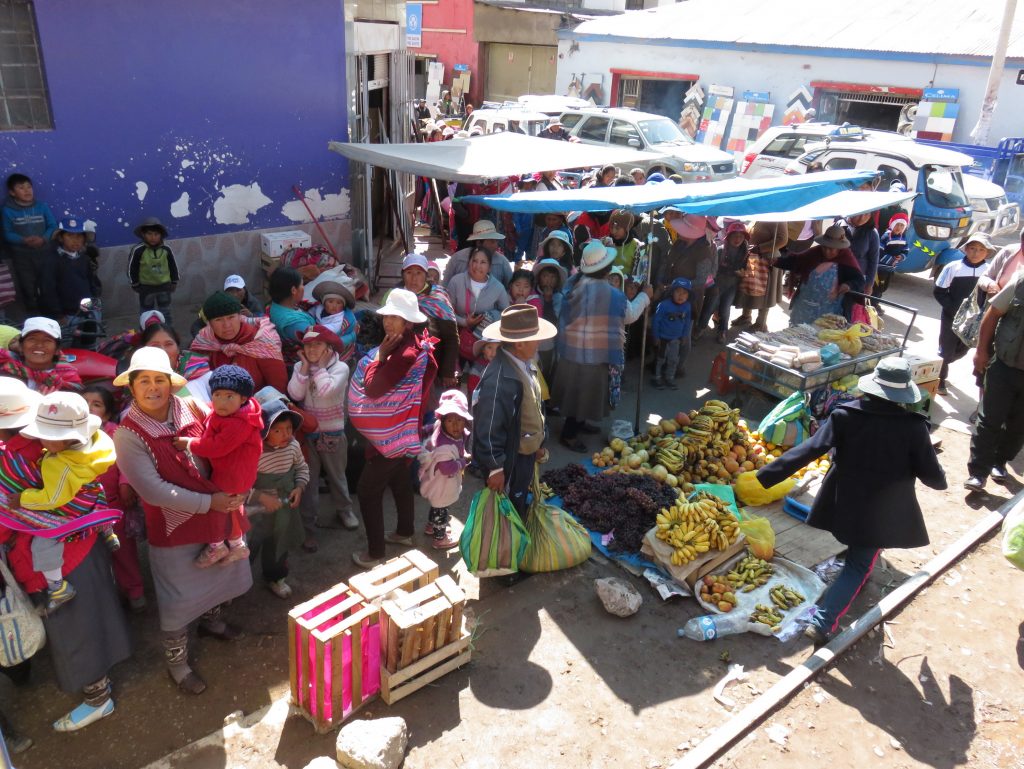 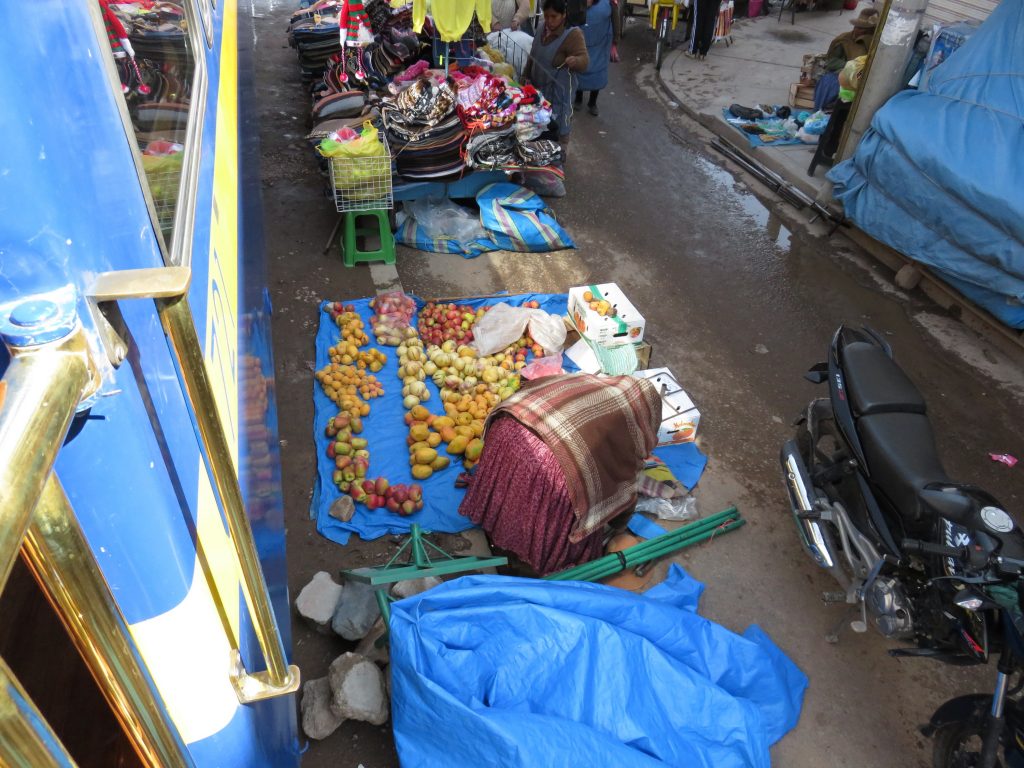 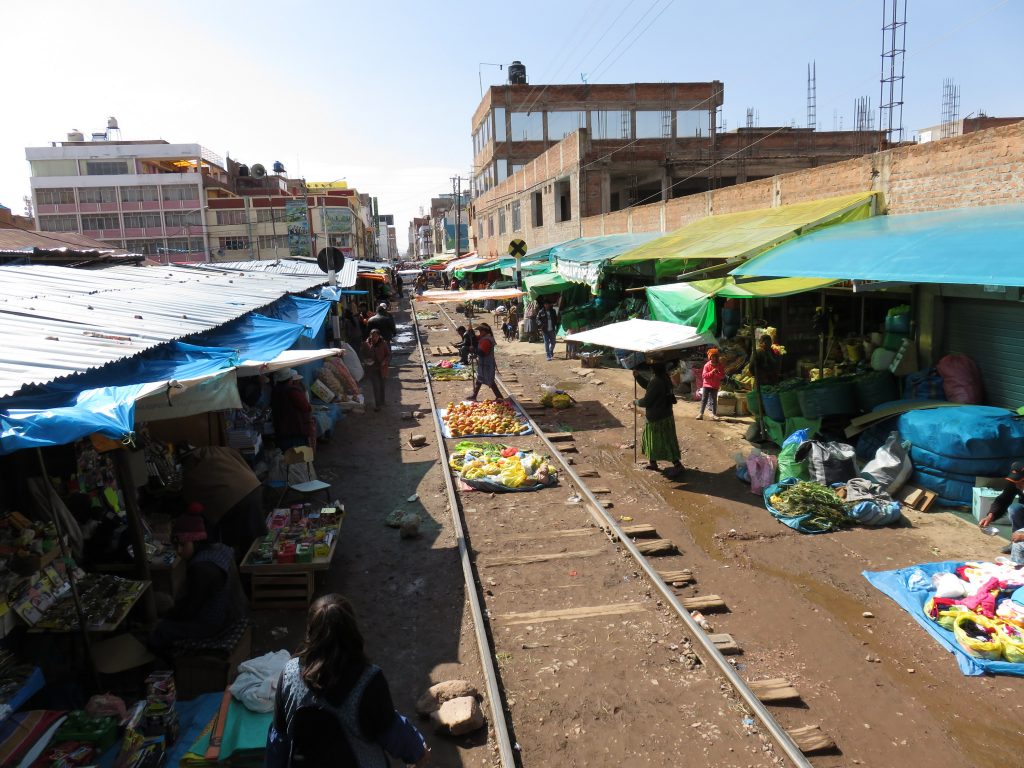 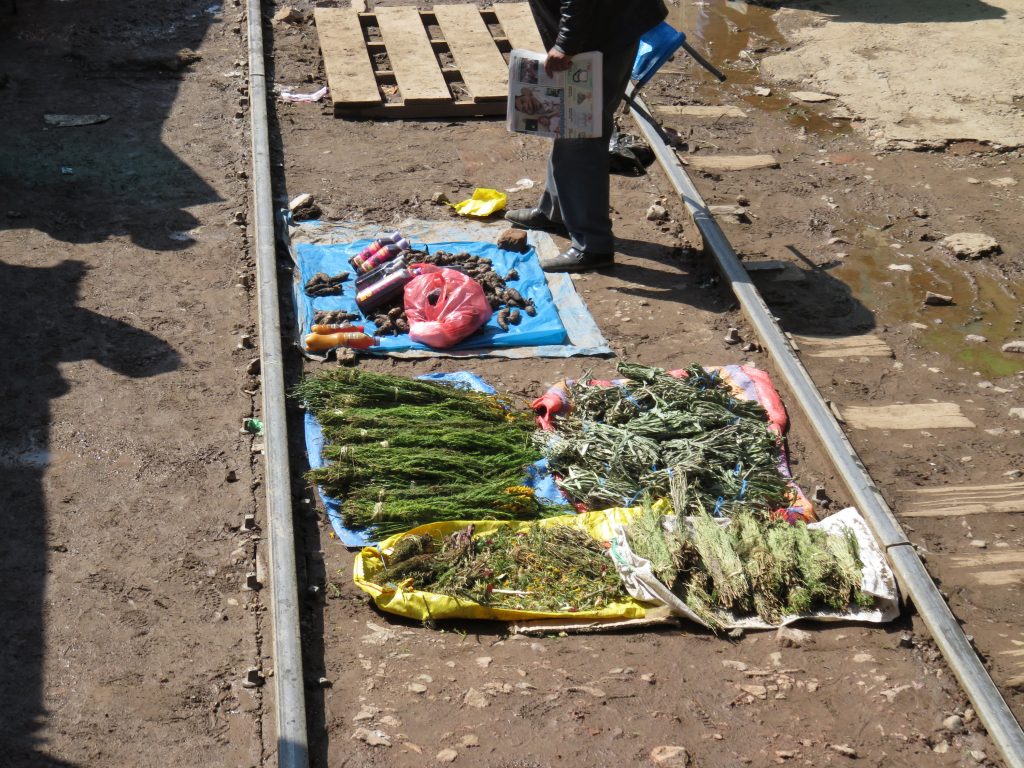 The three-course lunch felt like a visit to a five-star restaurant: 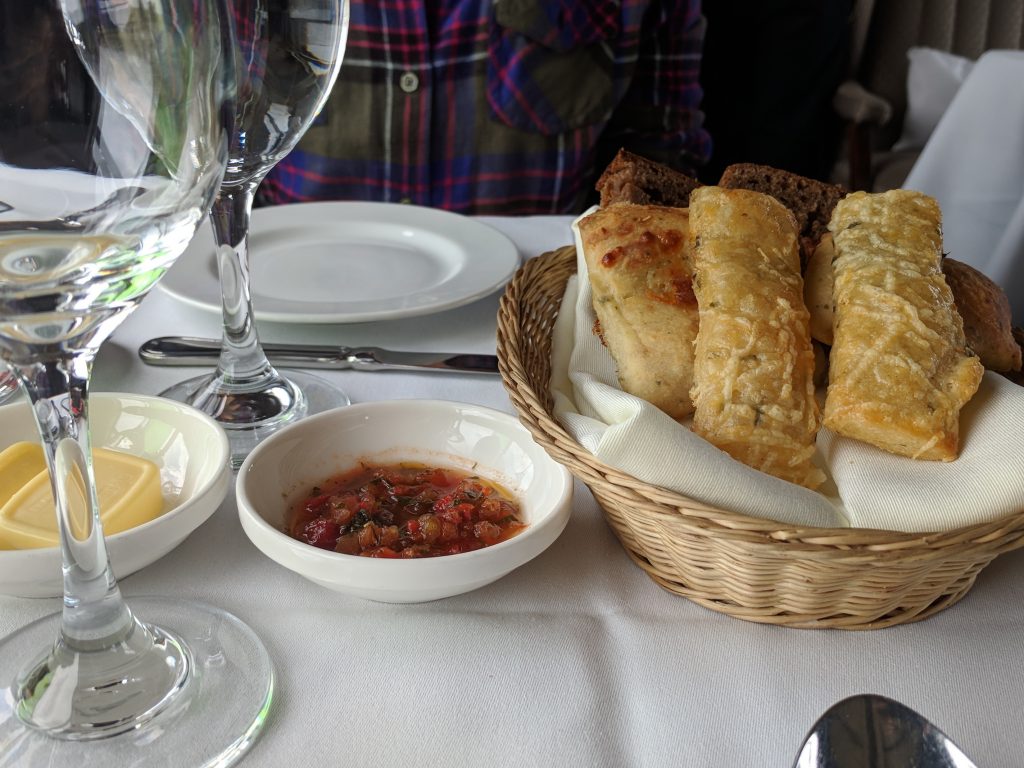 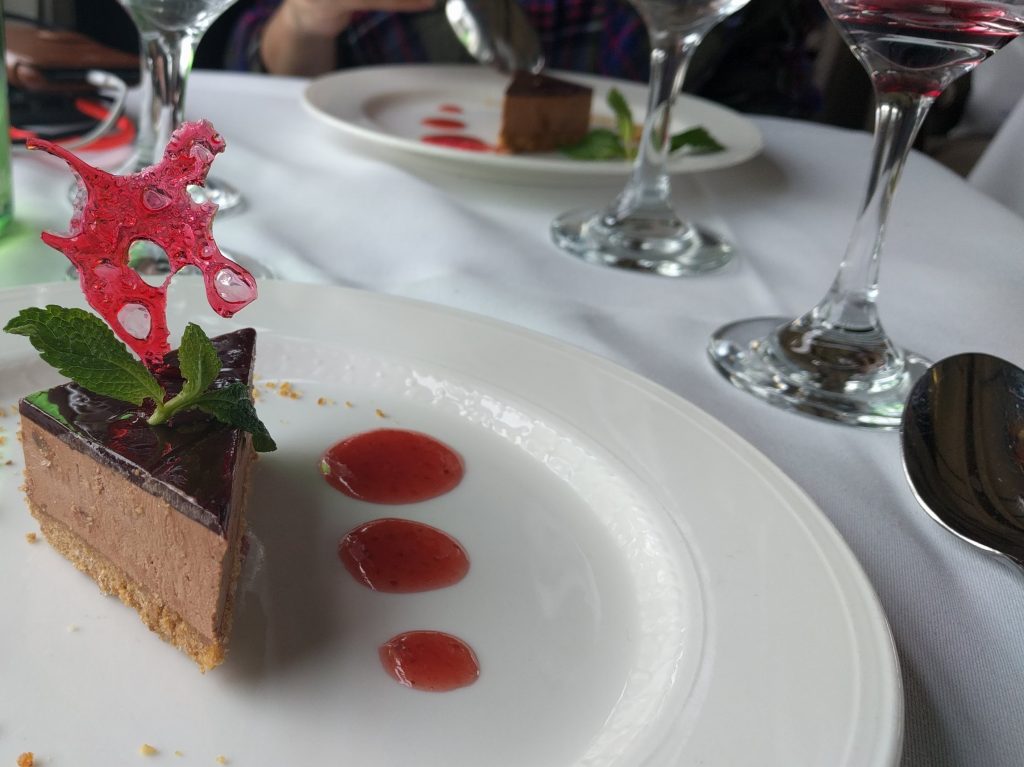 In the afternoon, the guys at the bar demonstrated how to mix pisco sour, the Peruvian national coctail. All the adults got to taste it, as well as other alcoholic beverages. The band played again. By then everyone was happy enough to rattle along, clap, sing, and even dance! 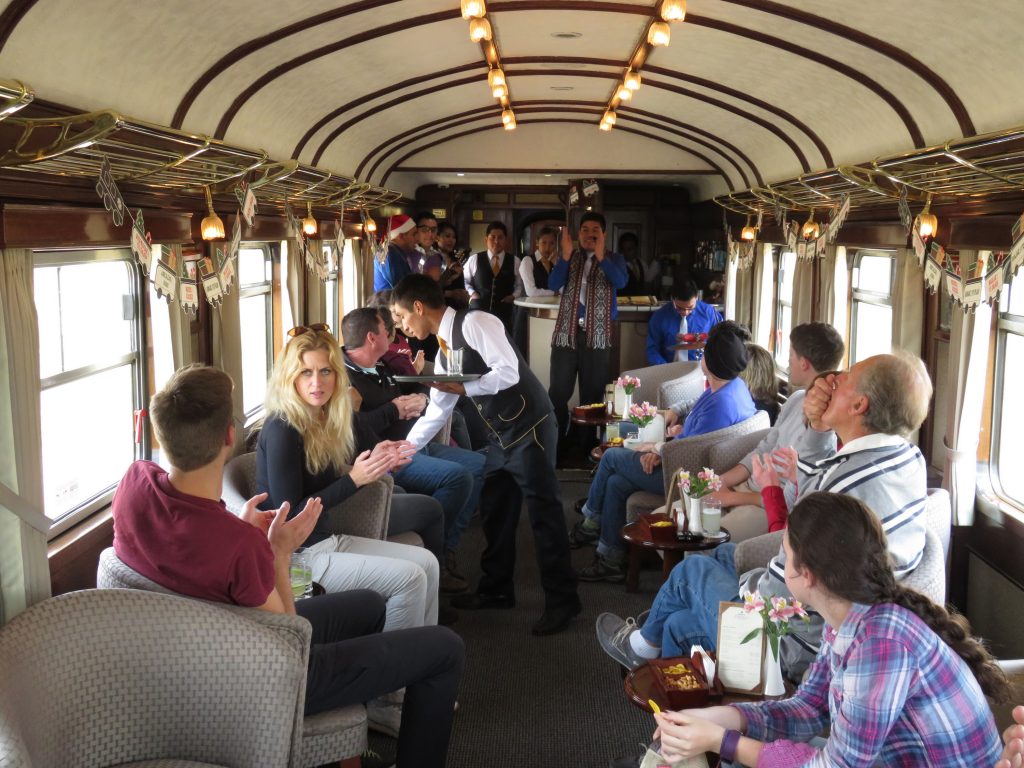 The band, in fact, was quite amazing! At first they played hours of Peruvian/Latin music. Later, per the audience’s request, they moved on to Beatles, Frank Sinatra, and even Pink Floyd!

It was a truly surreal experience: riding a luxury train, complete with white table cloths, drinks, live music and fun entertainment, while dressed in unwashed hiking clothes and hiking boots. It felt rather odd to pass through a poor countryside full of friendly people, many of whom, both old and young, waved at us, while listening to “The Wall:” 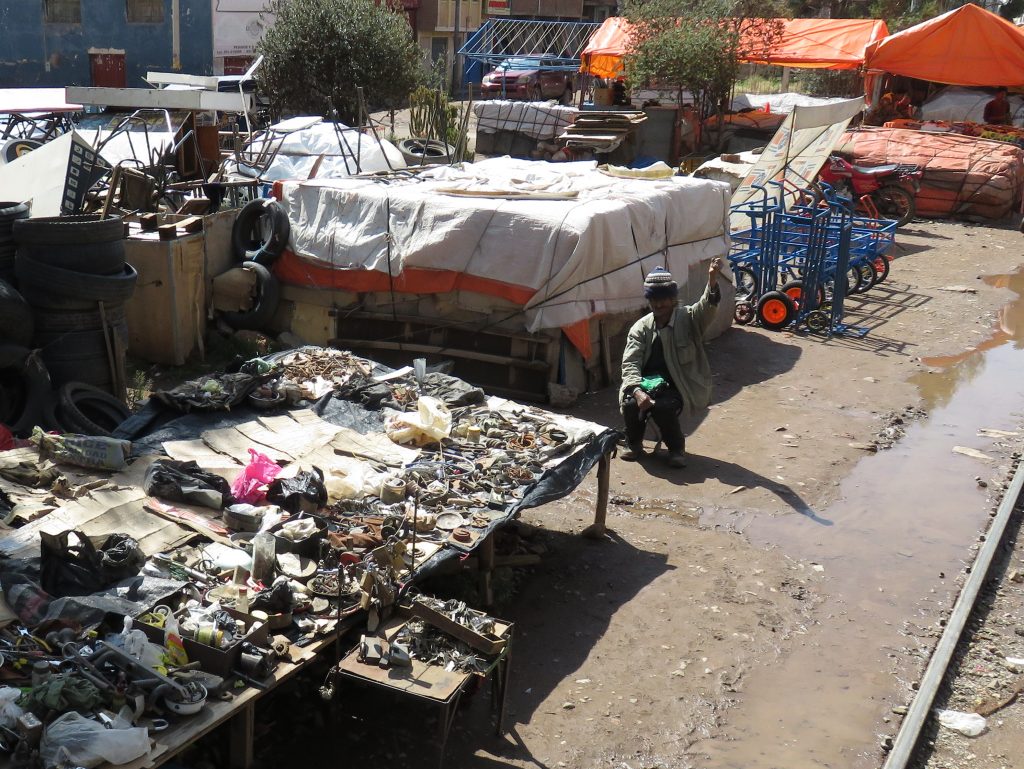 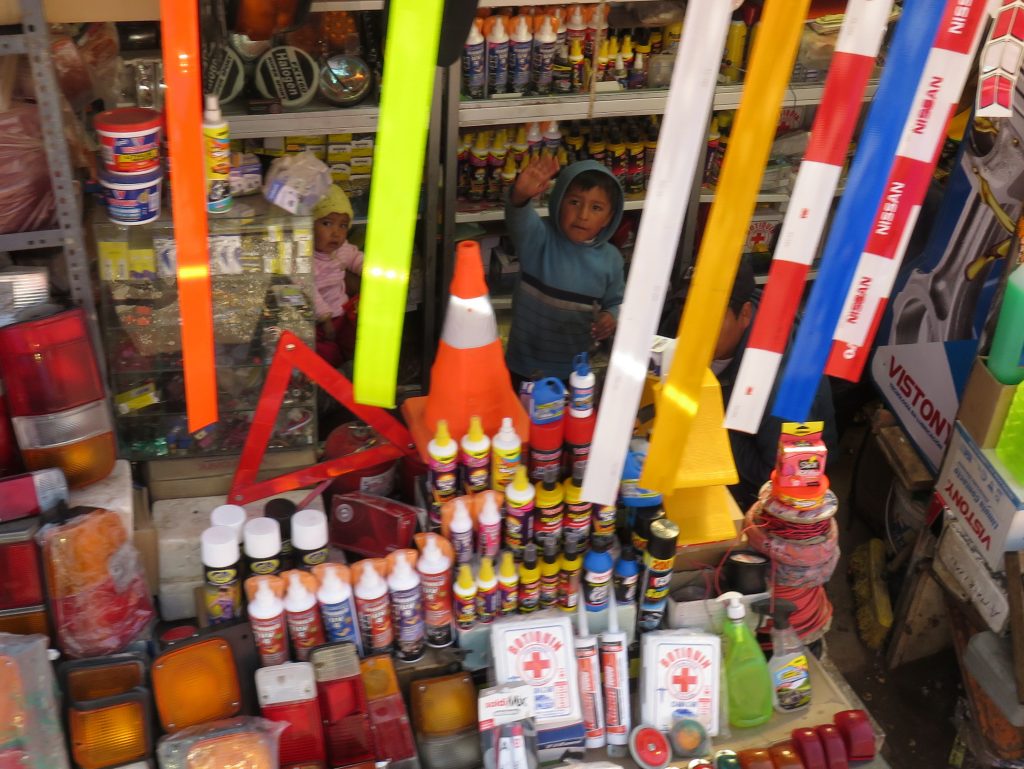 Yes, there was even an afternoon tea service!

I truly hoped the ride would never end! I was actually sad when we arrived at our destination…

Only many weeks later, after I was already home, did I learn that The Society of International Railway voted this train as one of the 25 most luxurious in the world! Ready to go?