Lake Titicaca is the largest fresh-water lake in Latin America. It is located on the border of Peru and Bolivia, with Peru owning the larger part. The meaning of it’s name is unclear. The locals like to joke that Titi is for Peru, and Caca (or kaka) for Bolivia. The formal explanation is that the name possibly meant “Gray Puma” in an old local language, after the animal that used to roam the region (or maybe after the shape of the lake, which, with lots of imagination, reminds one of a puma).

Like many other tourists, we visited Lake Titicaca on our recent trip to Peru for its unique floating islands.

According to our tour guide, the ancestors of the people now living on the floating islands, members of the Uru (or Uros) ethnicity, were fishermen living on the lake’s shores. These people realized early on that the reeds growing in the shallower parts of the lake (totora) are very buoyant when dry. They harvested them and used them to make boats. 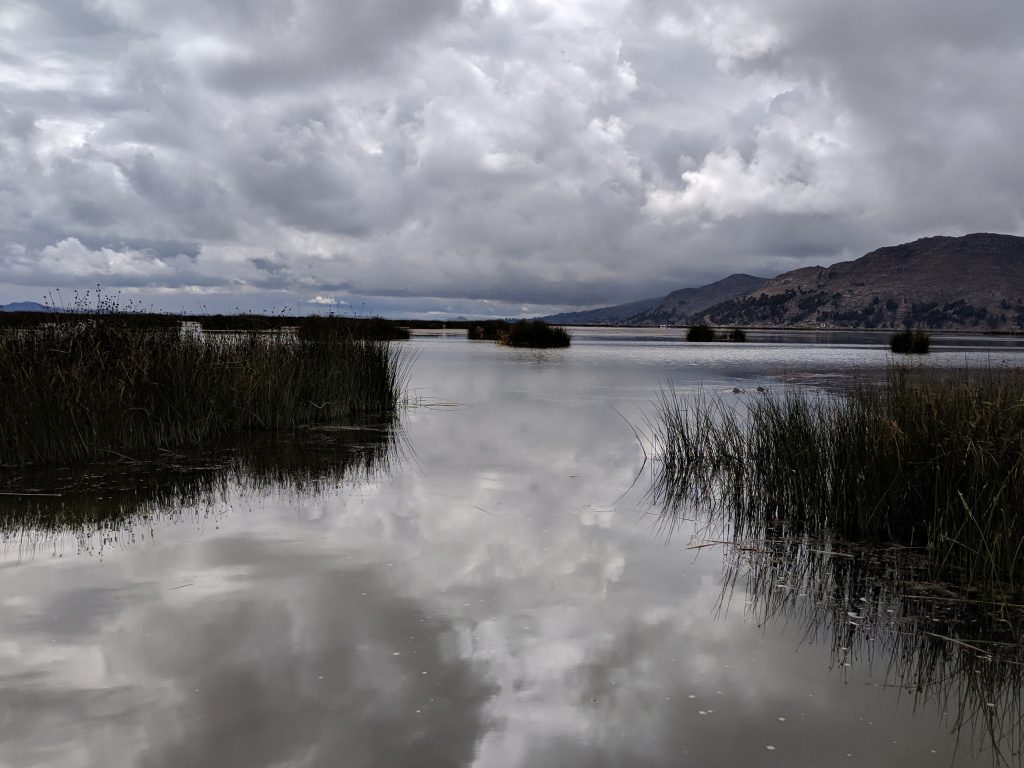 After the Incas conquered the area and started taking men to the army, some families escaped on their boats to the middle of the lake, where the new rulers could not reach them. They began living on these boats, sustaining themselves from whatever they could get from the lake. Here is a model of one such boat: 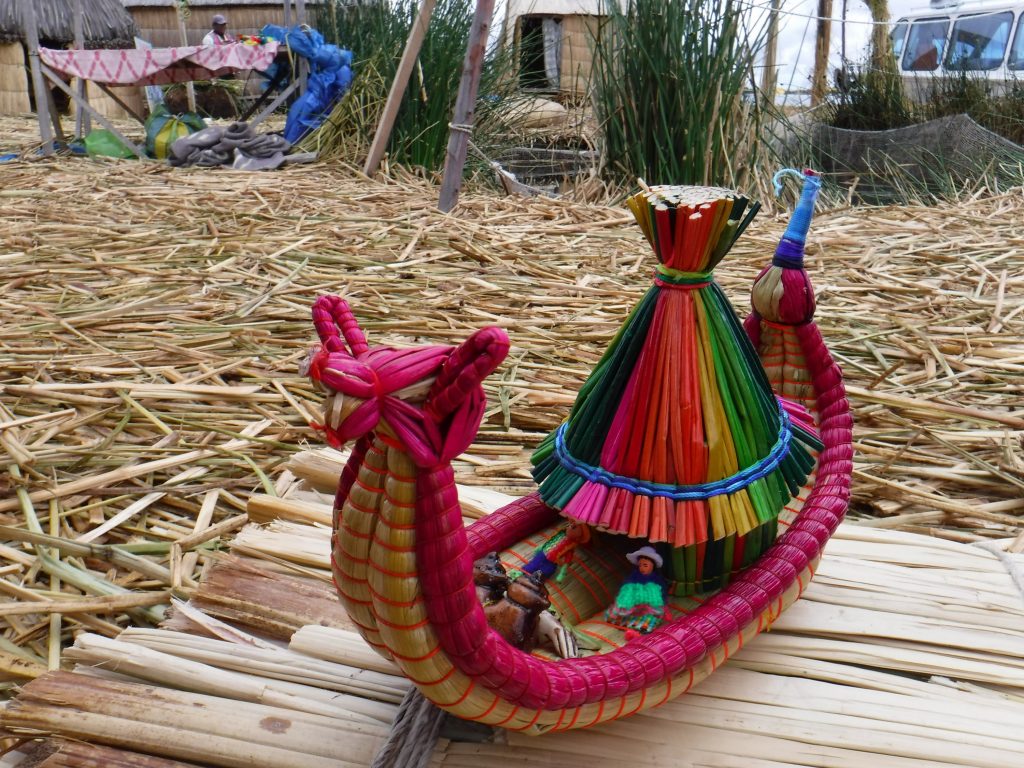 The community grew with time, but remained in boats even after the Incas fell, to avoid suffering in the hands of the Spanish conquistadors. After several hundred years living on boats, they began building floating islands in the middle of the lake. They moved closer to shore fairly recently, in the 1980’s, with some communities remaining in the more remote parts.

How the Islands are Built

When the reeds die, their root balls detach from the bottom of the lake and float to the top. The Urus collect these root balls, and use them as the base for their islands. They put sticks in the middle of each root ball, and then use a rope to tie the different root balls to each other: 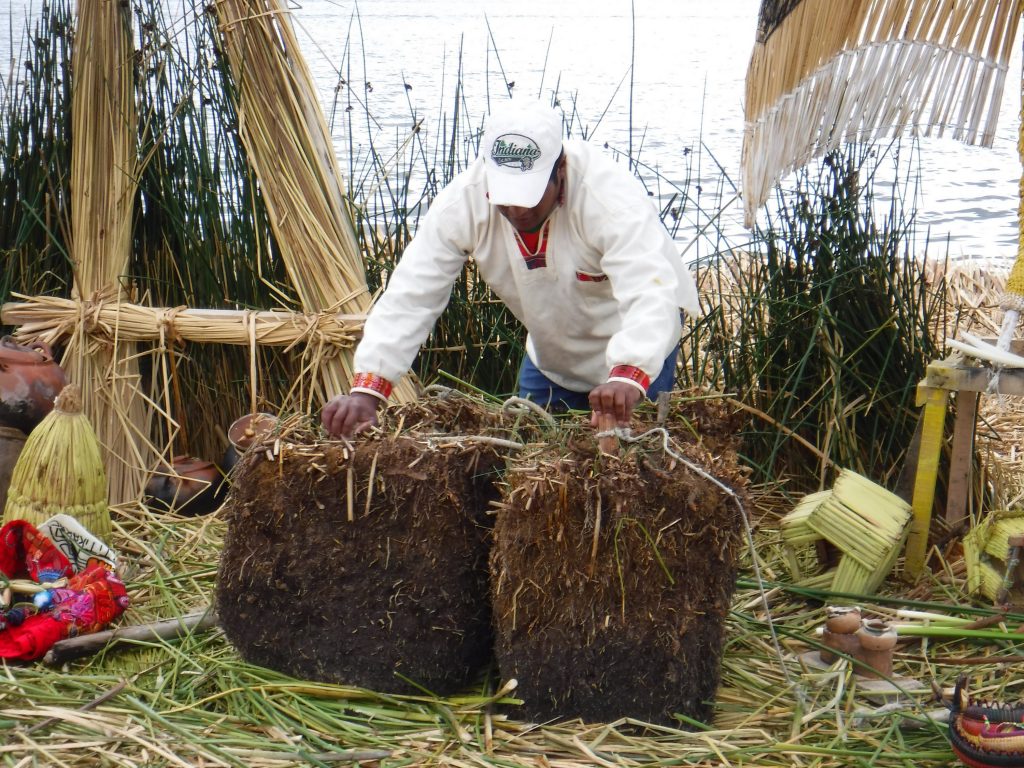 After the men tie many root balls together, they use saws and long-handled knives to cut reeds: 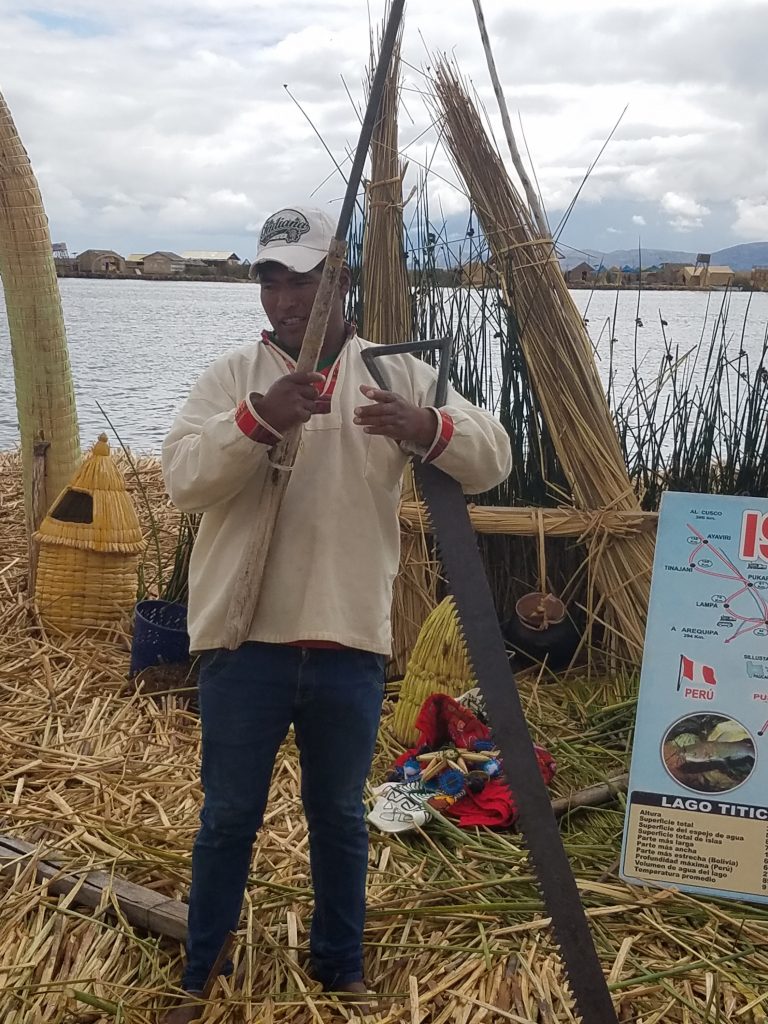 They pile reeds on top of the root balls, then keep piling them in different directions: 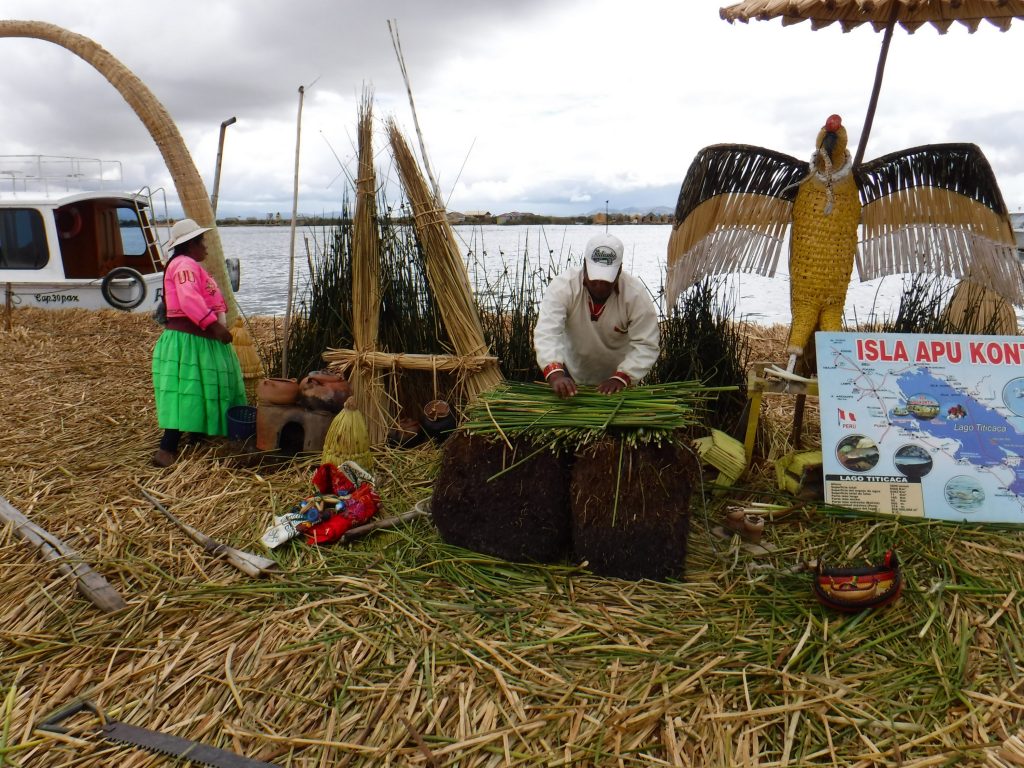 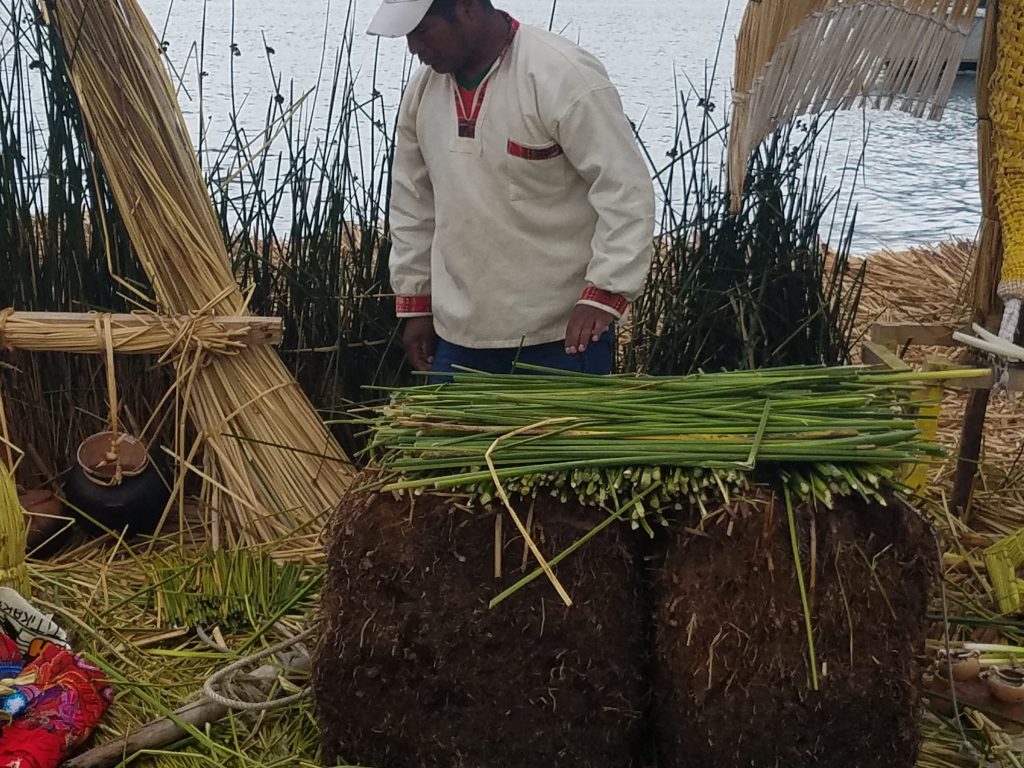 Once there are 2-3 feet of reeds covering the root balls, they use more reeds to build bases for huts, and then build reed huts to put on top, as in this model: 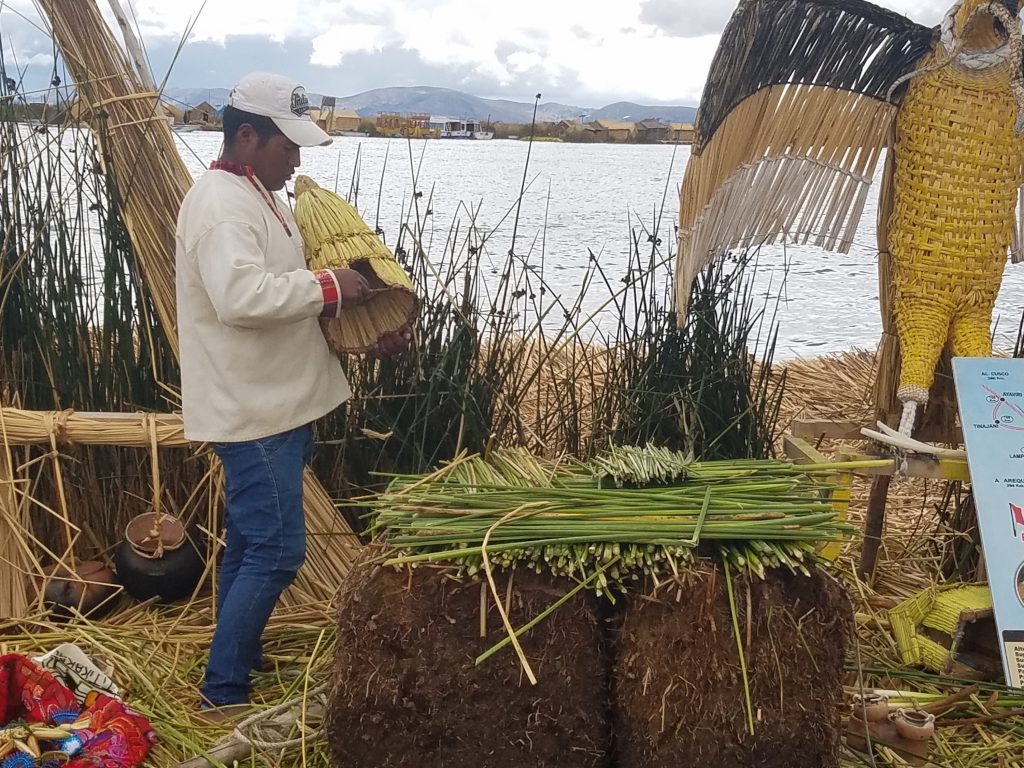 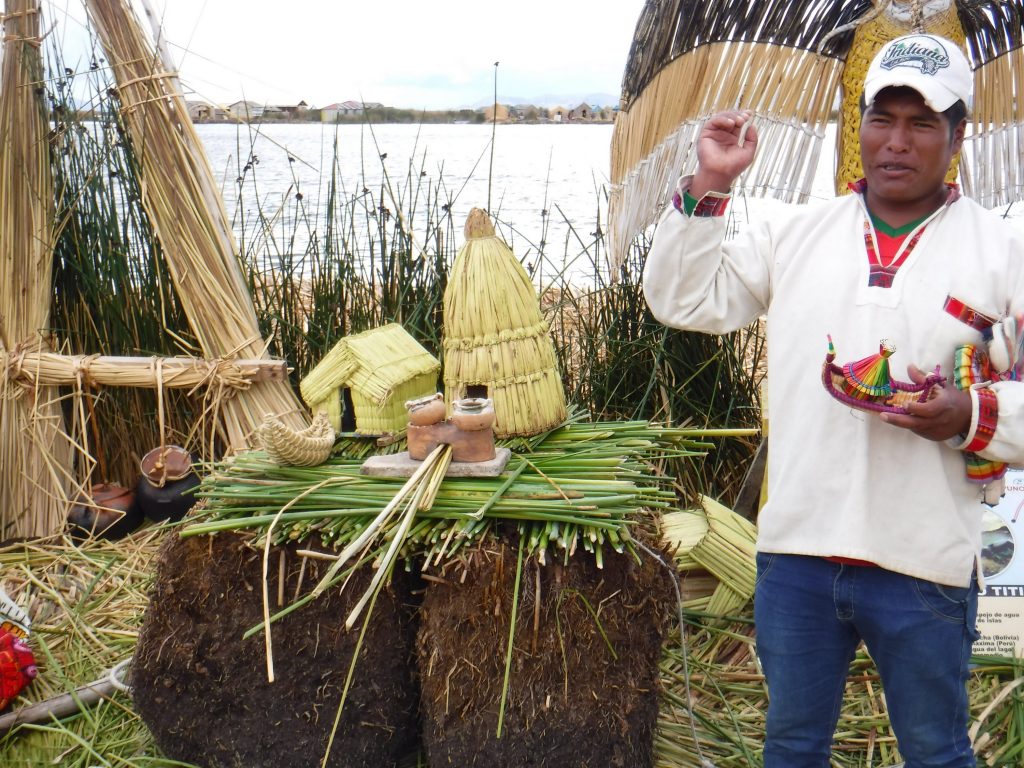 And there it is, a finished island: 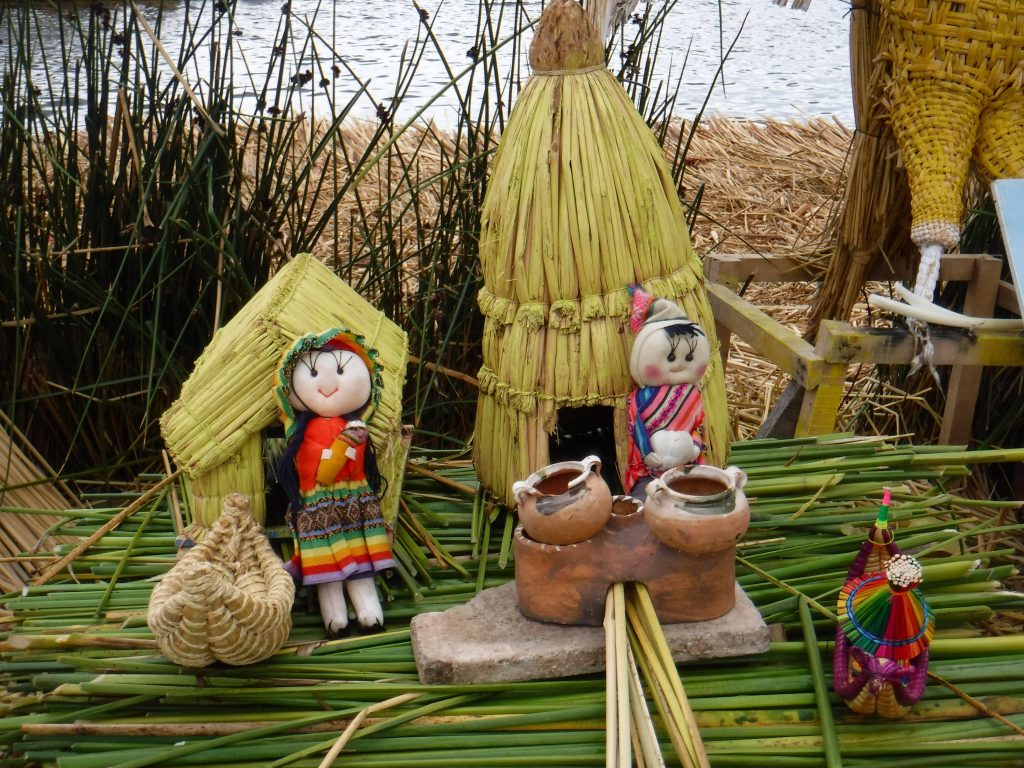 The men add new layers to the top of the island as needed. This is what the ground looks like: 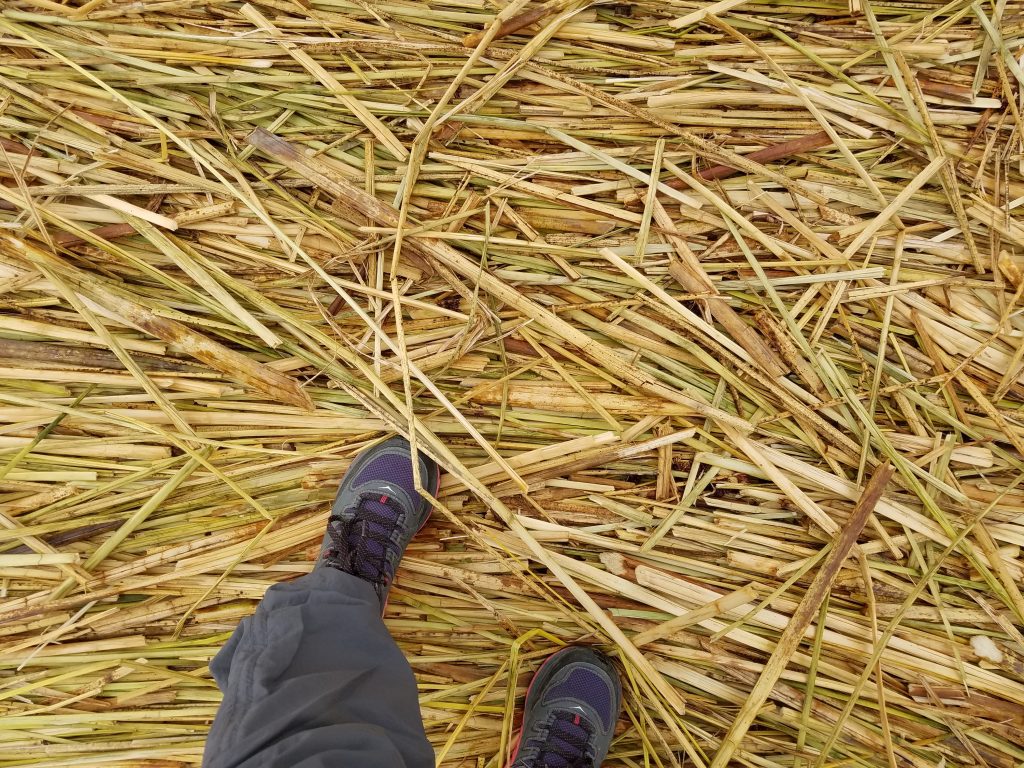 When you walk on them, the islands feel squashy and wet! In fact, the bases built under each hut are meant to keep the water away from the huts themselves.

Life on the Floating Islands

Generally, the Urus live in communities, with many islands gathered close together, around an open space of lake. There are several such clusters: 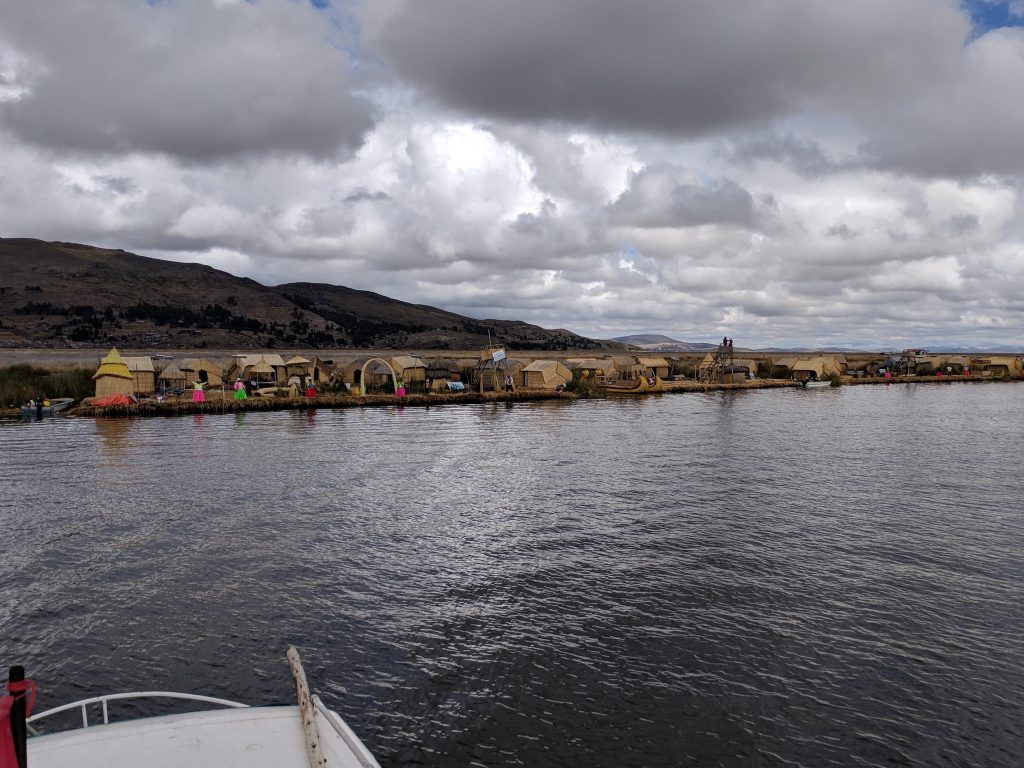 People drag and move the Islands as needed. If families in neighboring islands quarrel, for example, one of them can take their island and move it elsewhere.

Each of the islands is the home of a few families. Usually, every nuclear family has its own hut: 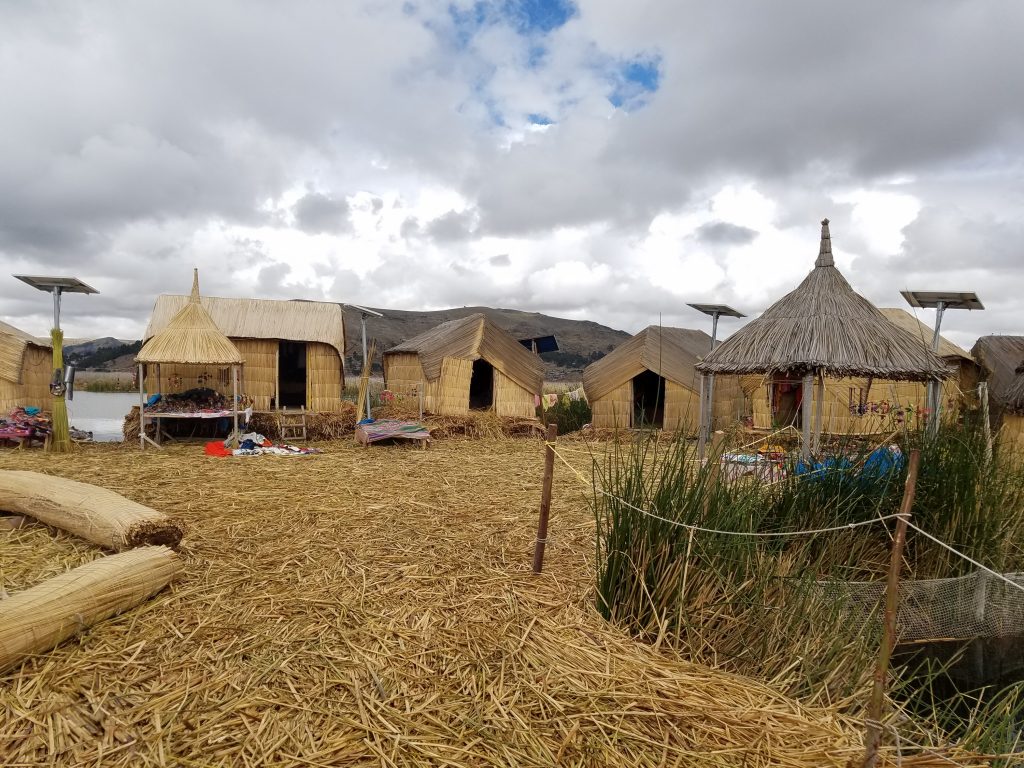 As you can tell, they now have solar panels to charge their cell phones (!).

There is a communal kitchen: 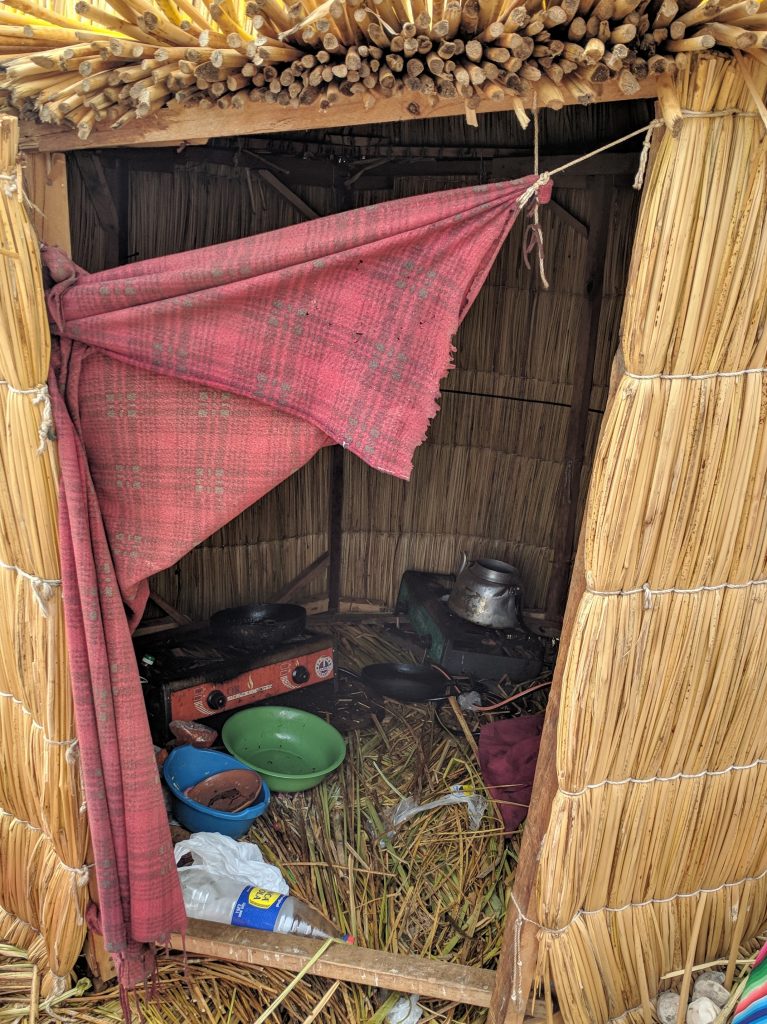 Men hunt and fish. The women care for the children, and cook meals, usually together. The meals consist of roots bought from the shore, as well as of fish and fowl caught on the lake: 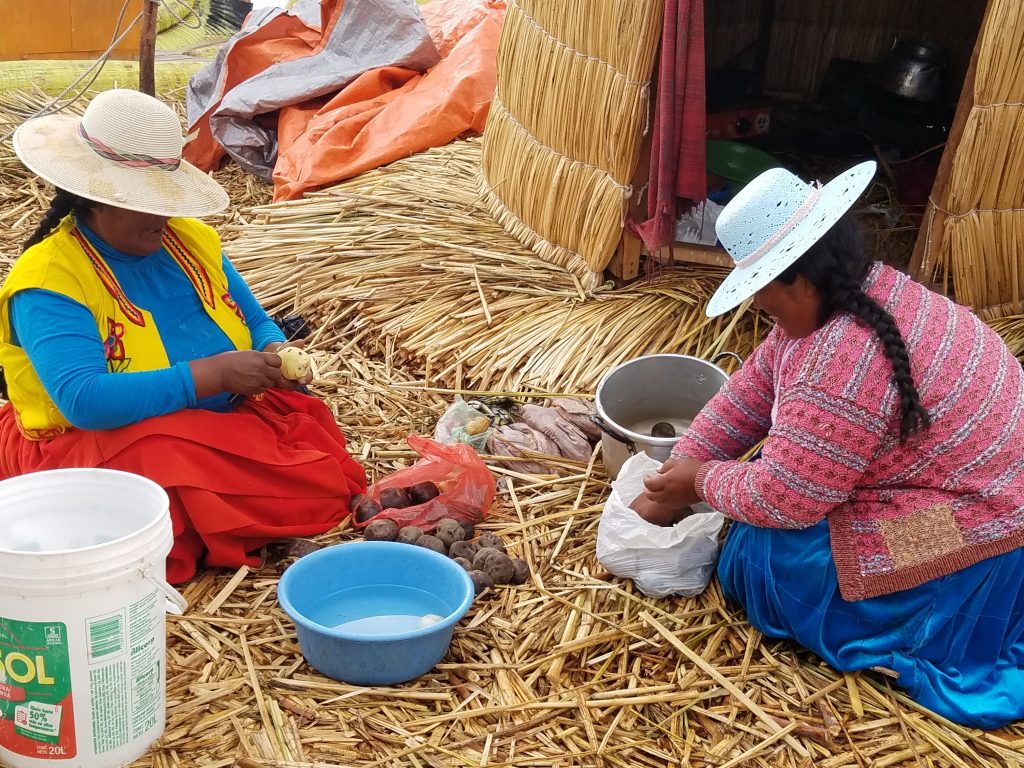 People also eat the reeds. We were told they keep people’s teeth healthy, strong and white. The locals believe that one particular potato-like root, oca, protects them from skin cancer: 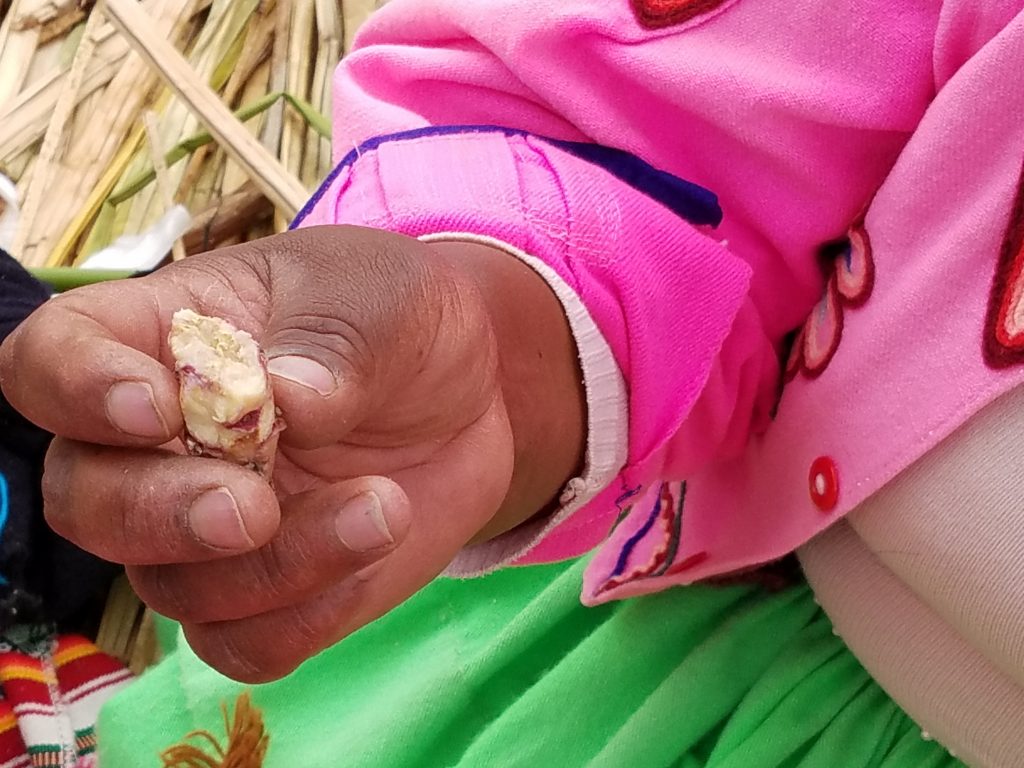 It is common for young men and women to live together before marriage. If either decides they don’t like their partner, they are free to leave and choose another mate. Once children are born, however, they usually get married.

When a young couple decides to establish their own household, the father of the family takes a saw and cuts off a chunk of the island for them to take away. They are then free to drag their new island anywhere they want.

The Uru And Tourism

A minority of Uru people still live in the middle of Lake Titicaca, far from the peering eyes of tourists. The majority, however, moved closer to shore, to make tourist access easier. In fact, it seems as if nowadays most Island People rely on tourism for a living.

As in the case of the weaving communities, what we want to believe and what actually is are not necessarily the same thing. Today, the Uru no longer need to fear Inca recruiters or conquistadors. They no longer have a real reason to stay on floating islands, save for the fact that they do not own lands on shore, and that the world seems to want them to stay there.

An entire economy relies on the existence of the islands: tourists are excited to see this different, exotic lifestyle. Numerous tourist guides, boat operators, tour agencies and so on make a living off of visiting them. Even the Peruvian government benefits from advertising their uniqueness. In fact, it feels as if the entire setting exists for the sake of tourists.

There are many islands, with many families living on them. We were told that there is a limit on the number of boats that are allowed to visit each day. The islands supposedly take turns hosting these boats. This ensures that the income that tourists bring is divided equally and fairly among the different families. We were told that each family hosts tourists once a month or so.

However, that didn’t seem to necessarily be the case. For one, we saw quite a few tourist boats scattered around the islands. This, for example, was ours: 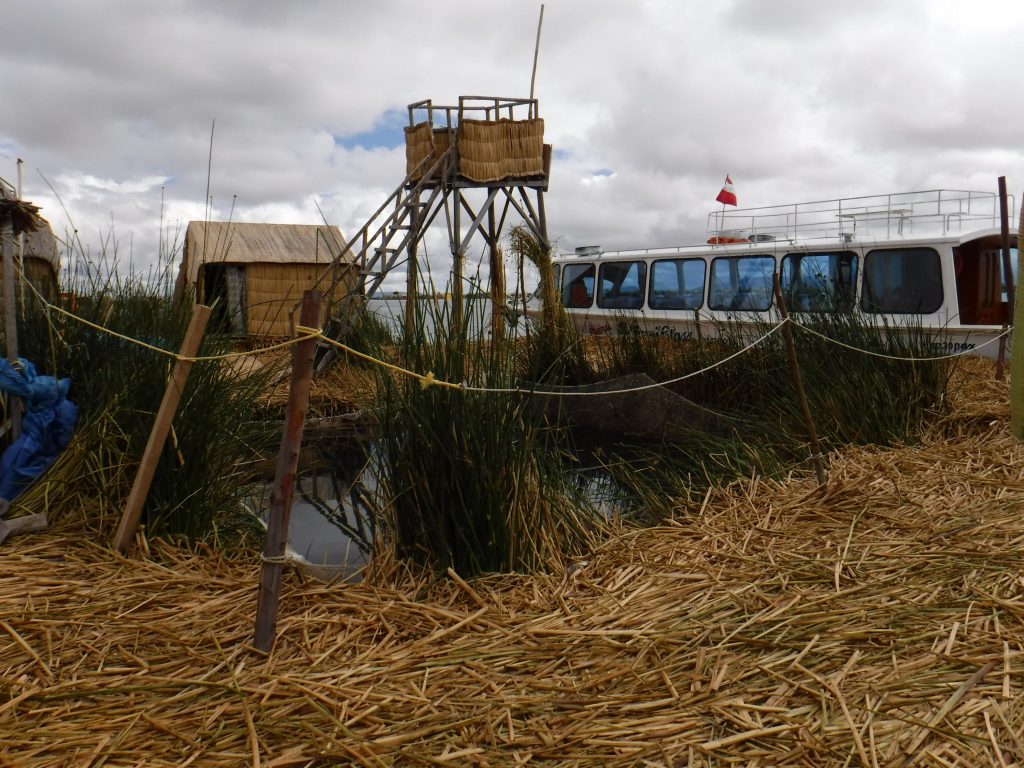 The locals are warm and hospitable. They are also very used to guests. As our boat neared, they were waiting for us on shore, singing and dancing: 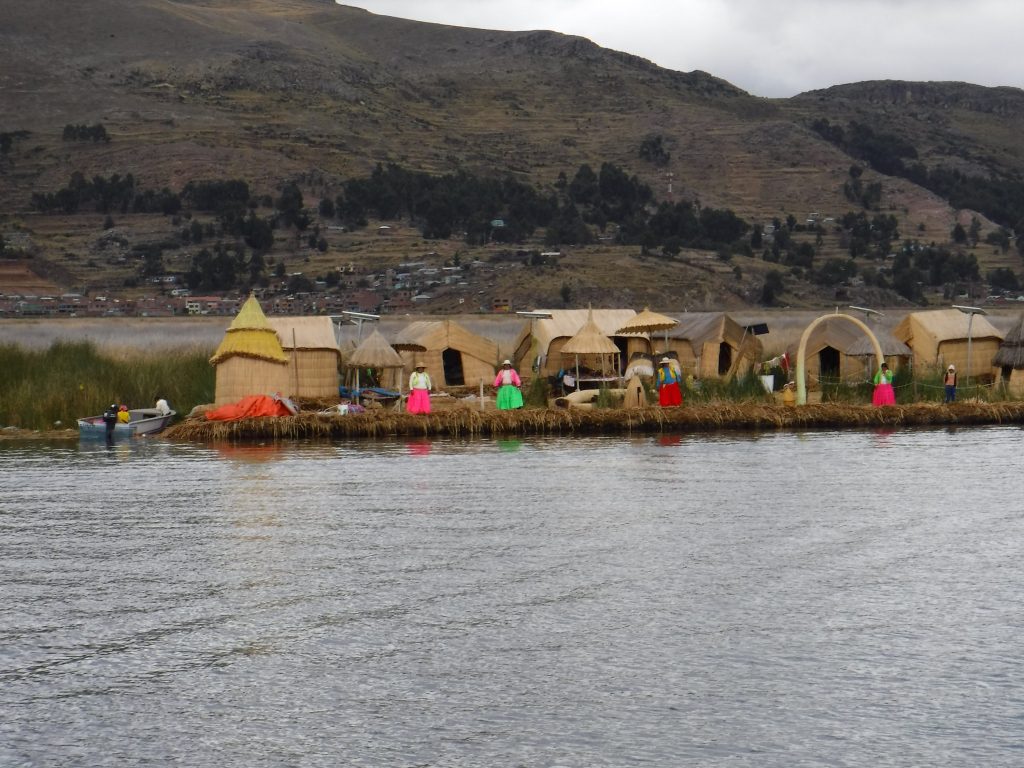 The islands are very small. Yet, props for tourist explanations take up a large, central space: 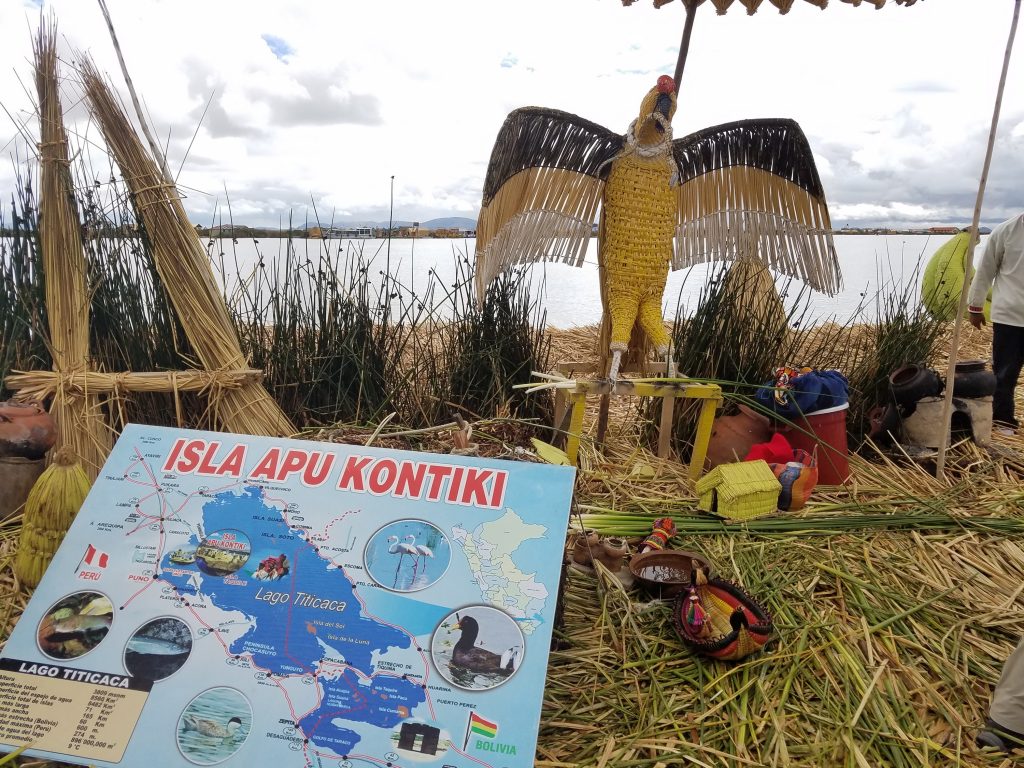 There was also a permanent-looking craft booth: 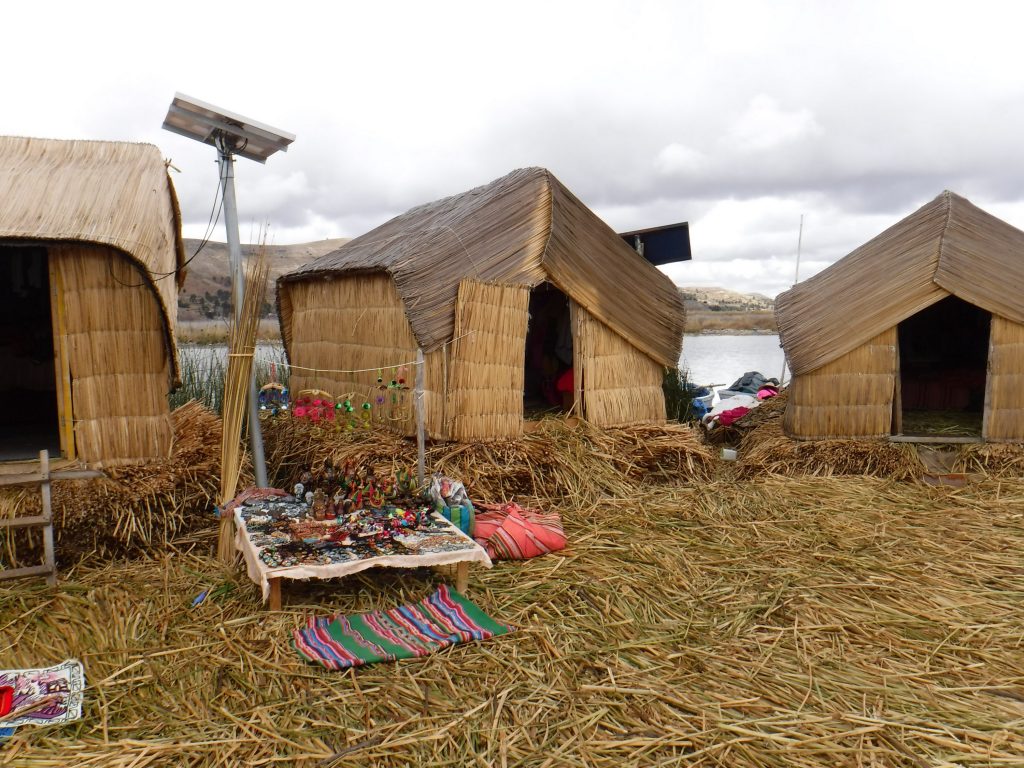 When we went to see the inside of a hut, it was too-tidy. Items for sale filled it up. Local costumes waited for tourists to try them on. I wondered whether anyone actually lived there: 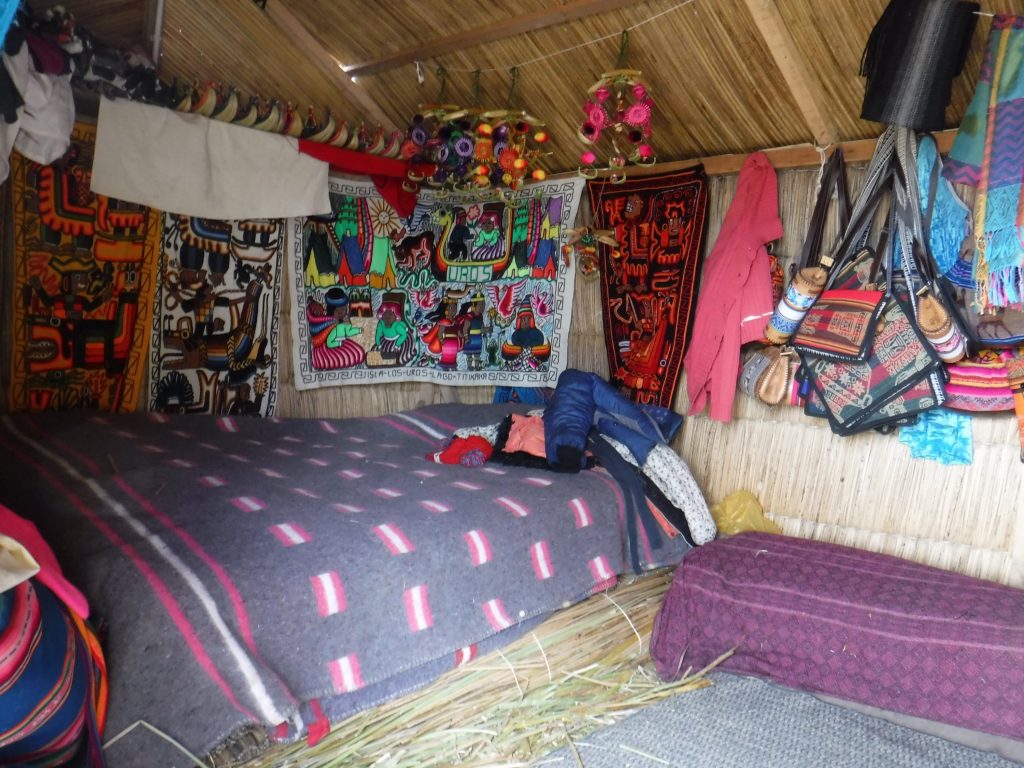 At some point, our hostess began embroidering: 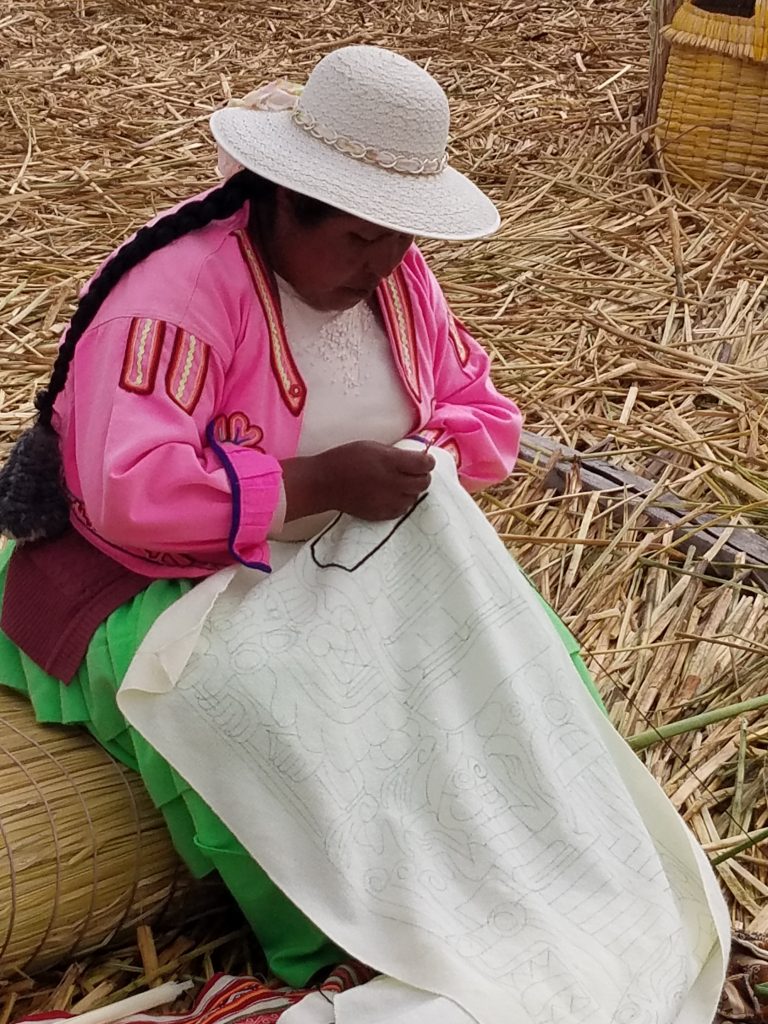 Within minutes of picking up the needle, her husband showed up with finished works we could buy: 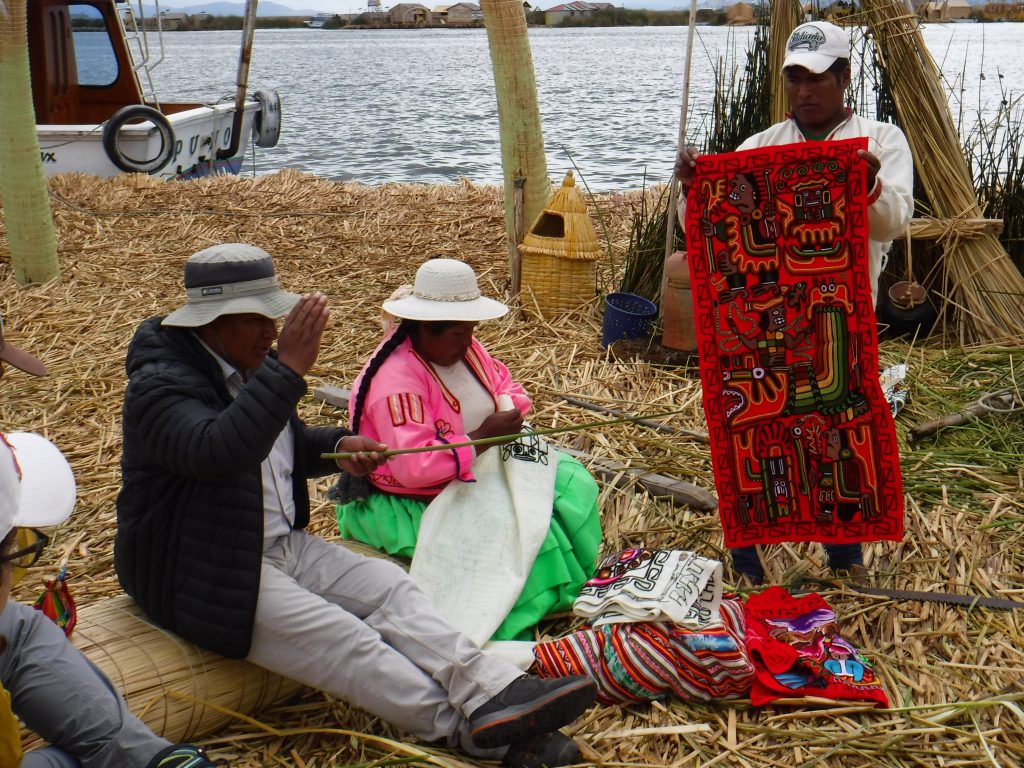 Needless to say, we couldn’t really leave without getting something, another addition to the pile of textiles we will never actually use: 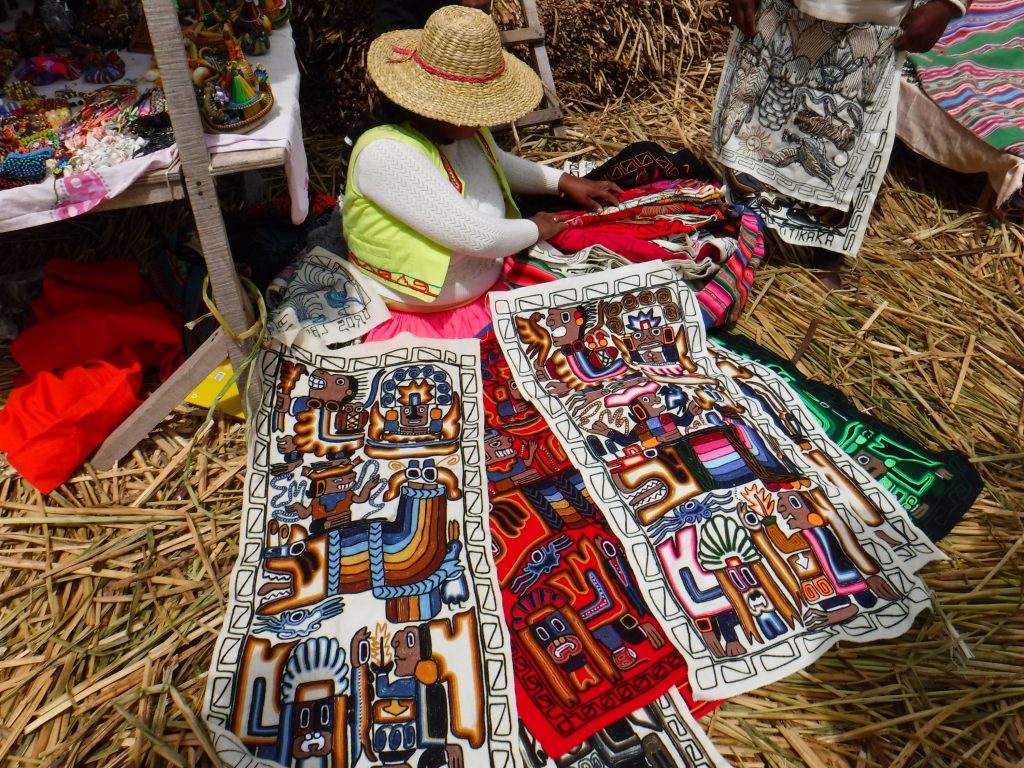 We paid extra to take a ride in a local “Mercedes Benz,” nicknamed that because it’s a money-maker. The “Mercedes Benzes” are reed boats, redesigned for tourists. They consist of two boats put together, often shaped like pumas, with a platform built between them. A motor boat pulls them. The locals, for their own needs, only ride motor boats. 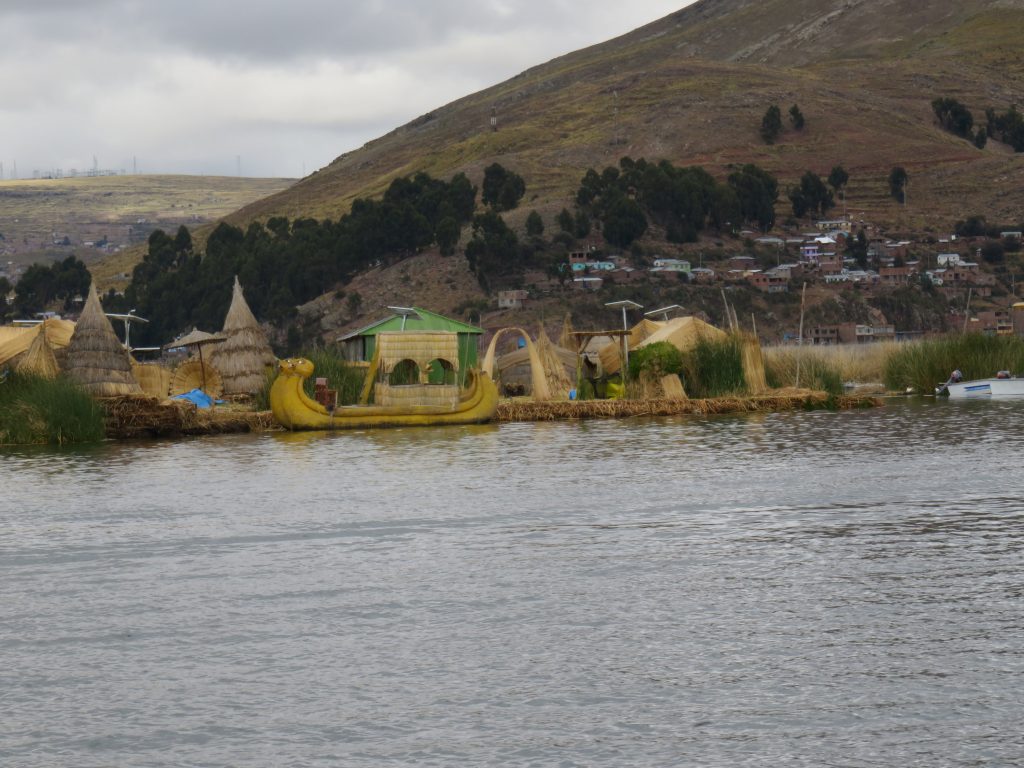 While riding our “Mercedes,” two little boys entertained us by singing songs in foreign languages, obviously without understanding the words. When they finished singing, they walked around asking for money. 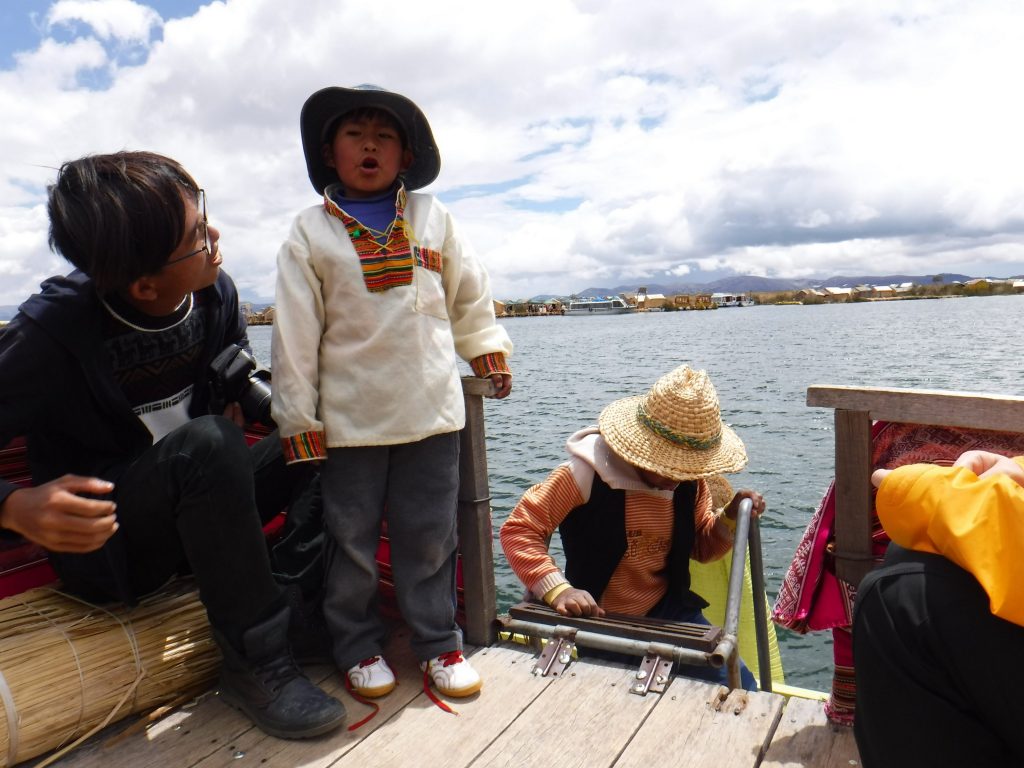 I felt as if us tourists replaced the Incas as far as keeping the Uru people on their islands. This didn’t feel good, because life on the floating islands did not seem healthy. The residents, especially the women, did not seem to be getting much exercise. There is hardly any room to walk. Women cook and embroider while mostly sitting. To leave the islands, people have to ride boats. Life is quite sedentary, and many adults are over weight.

The high elevation and glare from the water make avoiding the sun impossible. People get very tanned. The ova might not be enough to protect them from skin cancer. And the reeds didn’t seem to keep everyone’s teeth healthy, either: sadly, it seems that the younger generation doesn’t chew enough of them. The kids that sang for us, for example, had many rotten teeth, perhaps another side effect of too many tourists giving too much candy.