Lake Titicaca Islands: What to Expect from a Home Stay on Amantani Island

I haven’t had much time for sewing this week. Temperatures in California have been record-breaking high, which meant my fruit trees started coming out of winter dormancy earlier than usual. I therefore had to spend a couple of days in the garden, pruning, spraying, and fertilizing. In addition, I had to care for a sick child. In between, I tried to stick to working on my countless unfinished-projects, and spent hours ironing interfacing. No wonder I find it more interesting to reflect, once again, on my recent trip to Peru!

Today I would like to tell you what to expect if you decide to try a home stay on Amantani Island, a small island in the middle of Lake Titicaca.

Unlike the man-made Uros Floating Islands, the island of Amantani is a real, solid island in the middle of Lake Titicaca. Seeing it getting near after several hours on the reed islands and more time on the rocky boat was a relief… 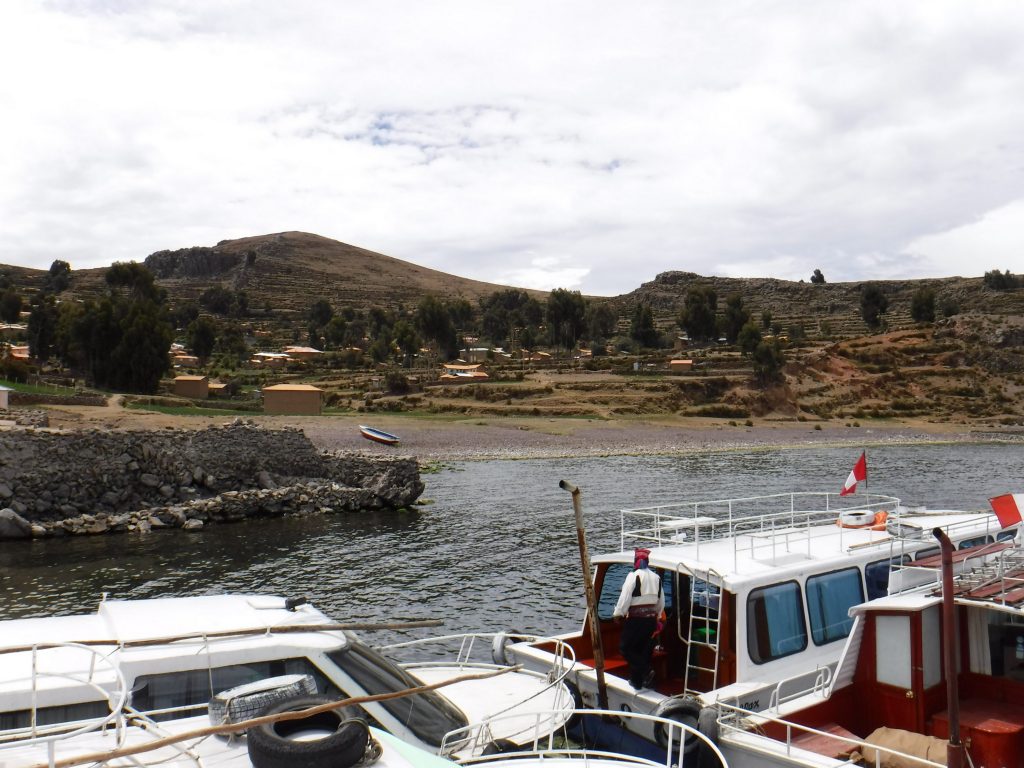 When we planned our trip, we decided to try a home stay on the island. We thought it would be interesting not only to see how people in other parts of the world live, but to also experience living like them, even if just for one day. I expected to sleep on a living-room floor in someone’s hut, and eat the foods they normally eat. The reality turned out to be a bit different.

When our boat reached the dock, a group of women was waiting to greet us. They were all dressed in traditional black clothes embroidered with colorful flowers. We later learned that these were their formal frocks, reserved for special occasions, and that husbands traditionally embroider their wive’s clothes. One of these women turned out to be our host. She asked us to follow her uphill to the village. 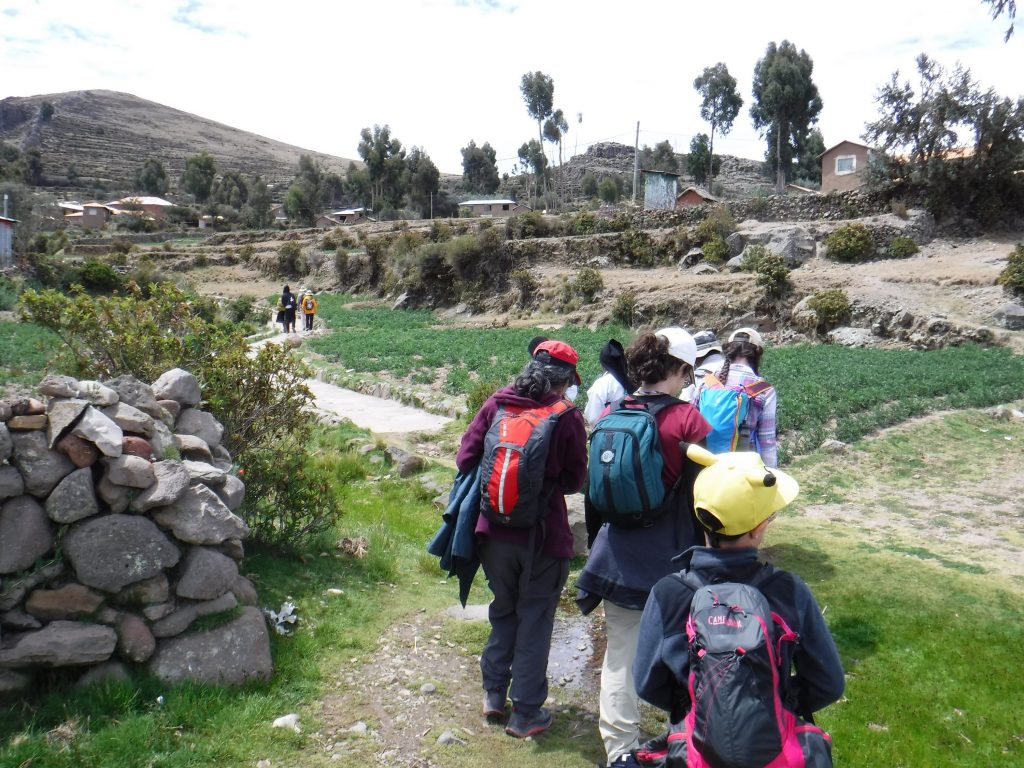 Luckily for us, the house we stayed at turned out to be not too far from the docks. Once there, we were greeted by the rest of the family, and were introduced to everyone: our hostess Lucrecia, her husband Richard,and their young daughter Diana Isabella. 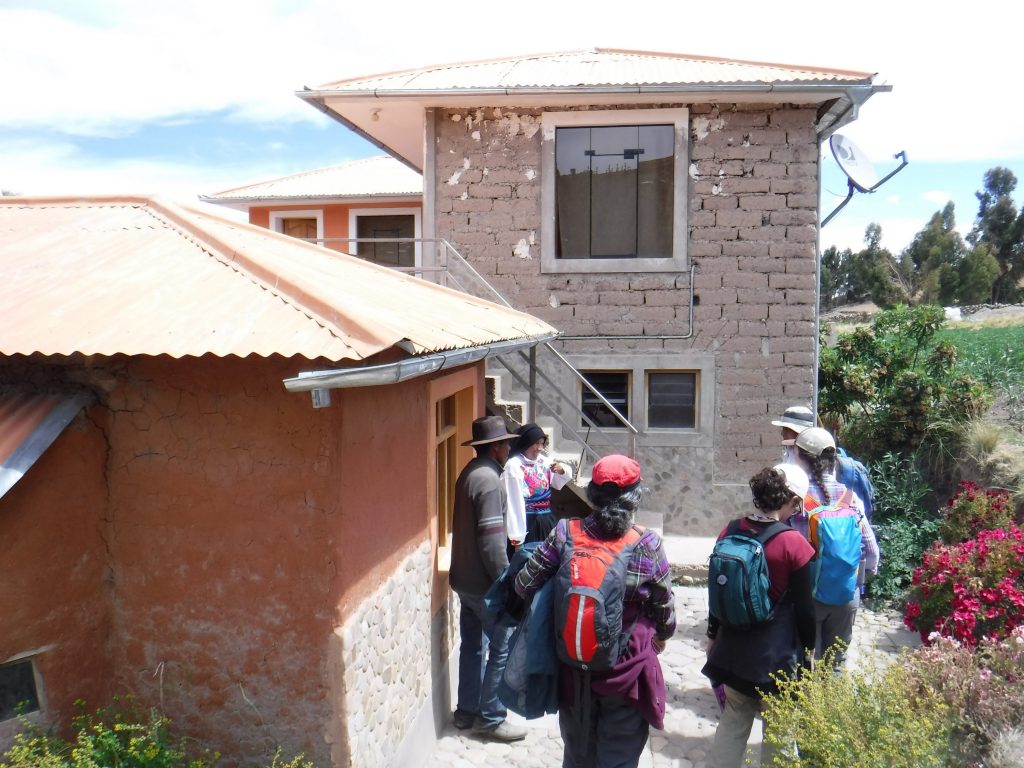 To our surprise, instead of the modest hut we expected, we found a large, two-storied building, with an entire newly-built guest wing. We weren’t going to sleep on a floor in a living room after all. The entire upper floor was dedicated to tourists, and consisted of three comfortable guest rooms, two for us and one for our guide. 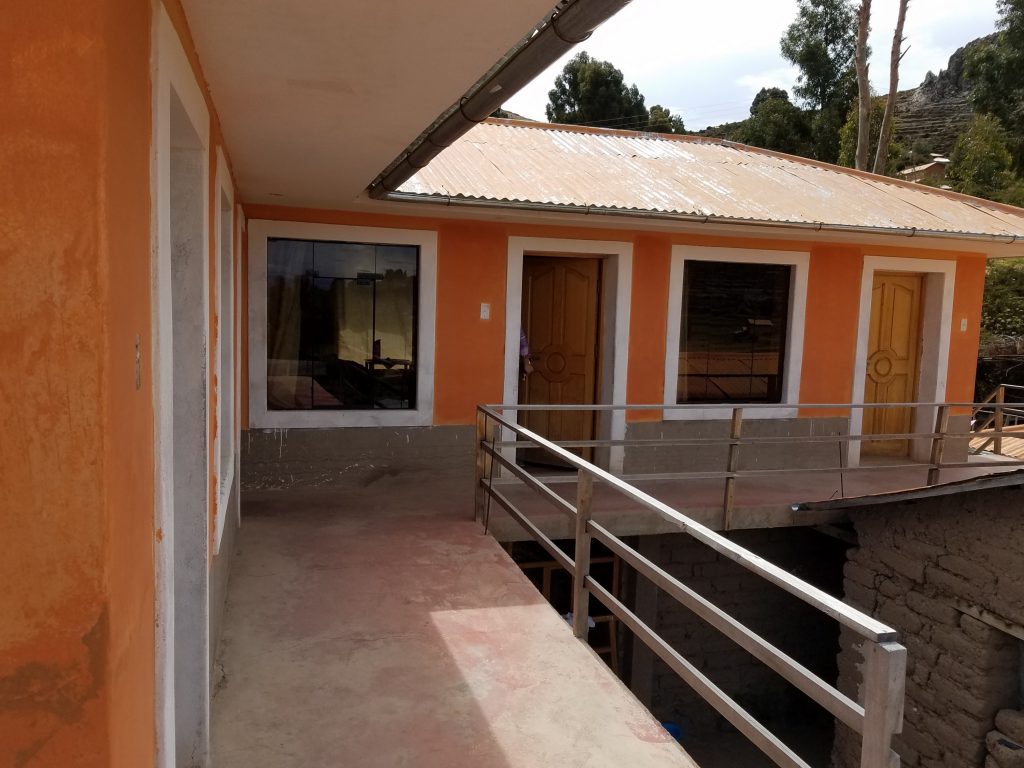 Our host family, it turned out, did not use any of these rooms. They were reserved for tourists, and were comfortable, clean and well maintained: 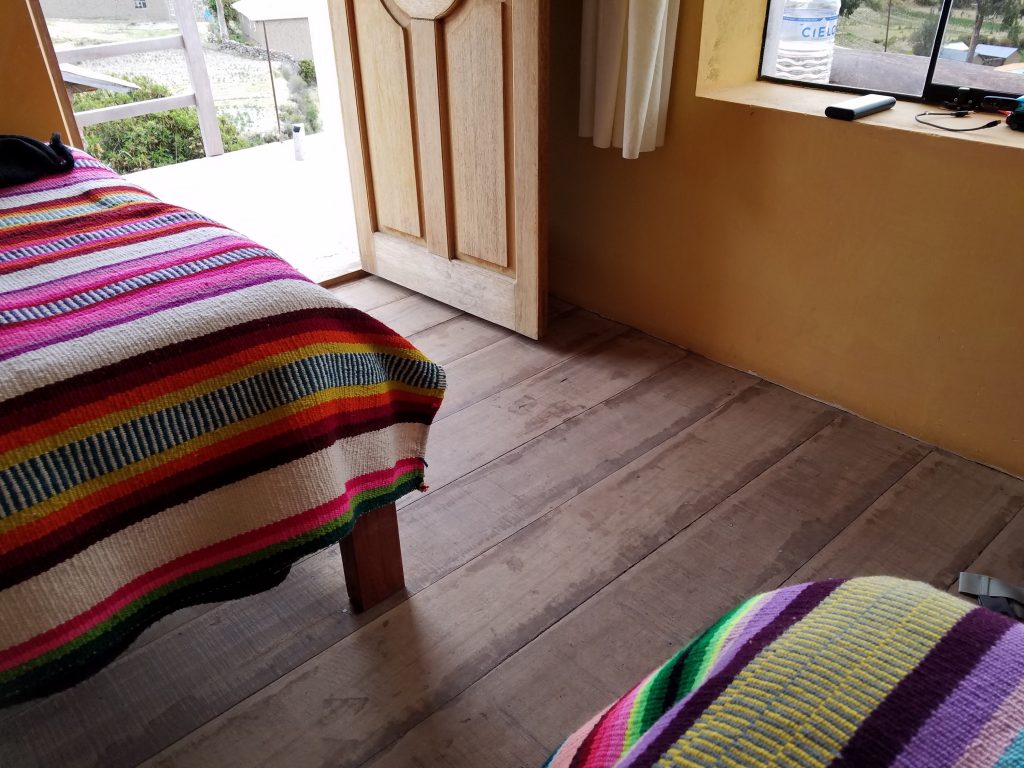 The beautiful view was a bonus: 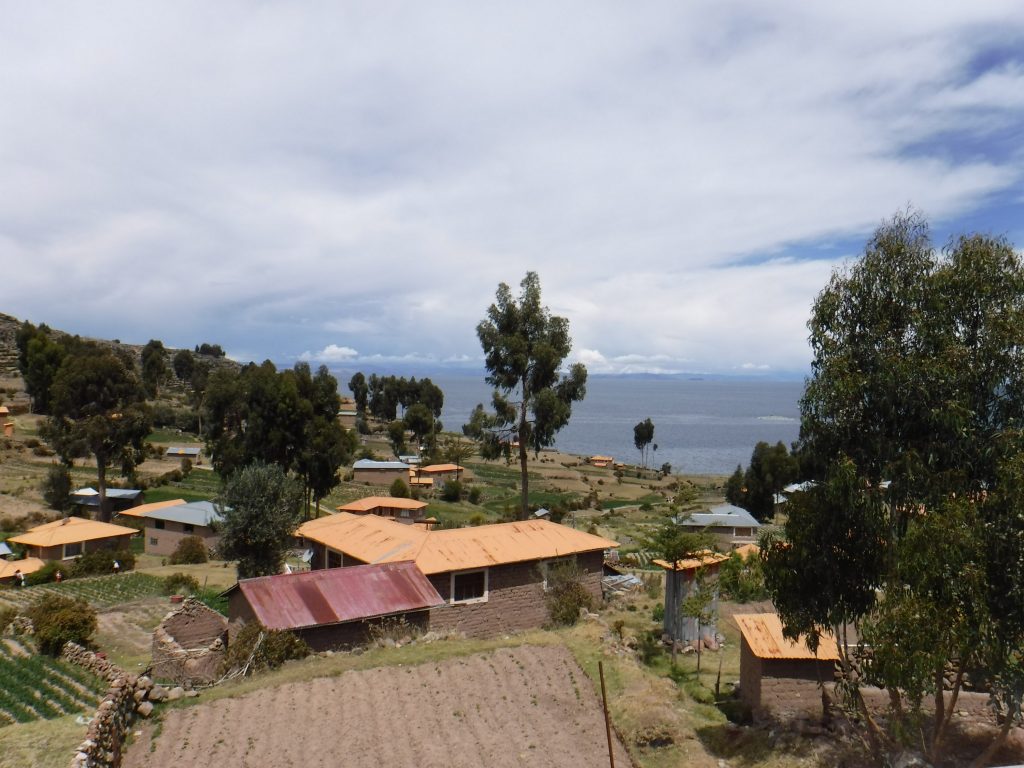 Still, I felt a bit disappointed. This was more AirBnb than a home stay.

After a short rest we went down to the kitchen, the only common area of the house. There, our hostess, Lucrecia, and her sister Nelly were in the midst of preparing our lunch. 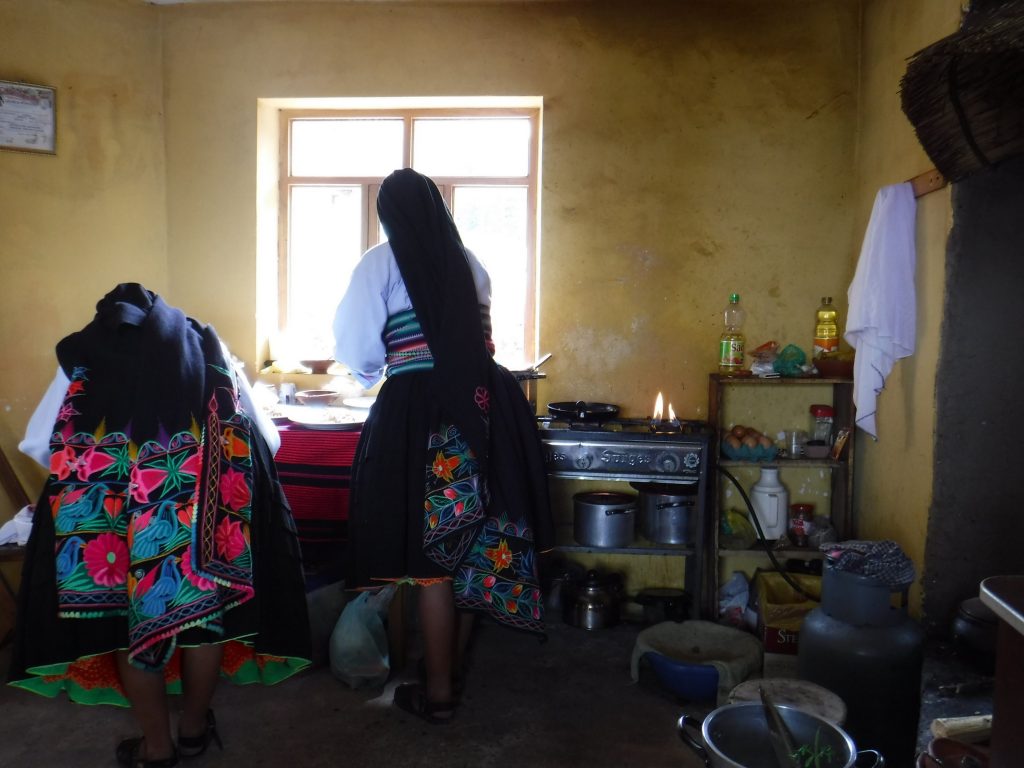 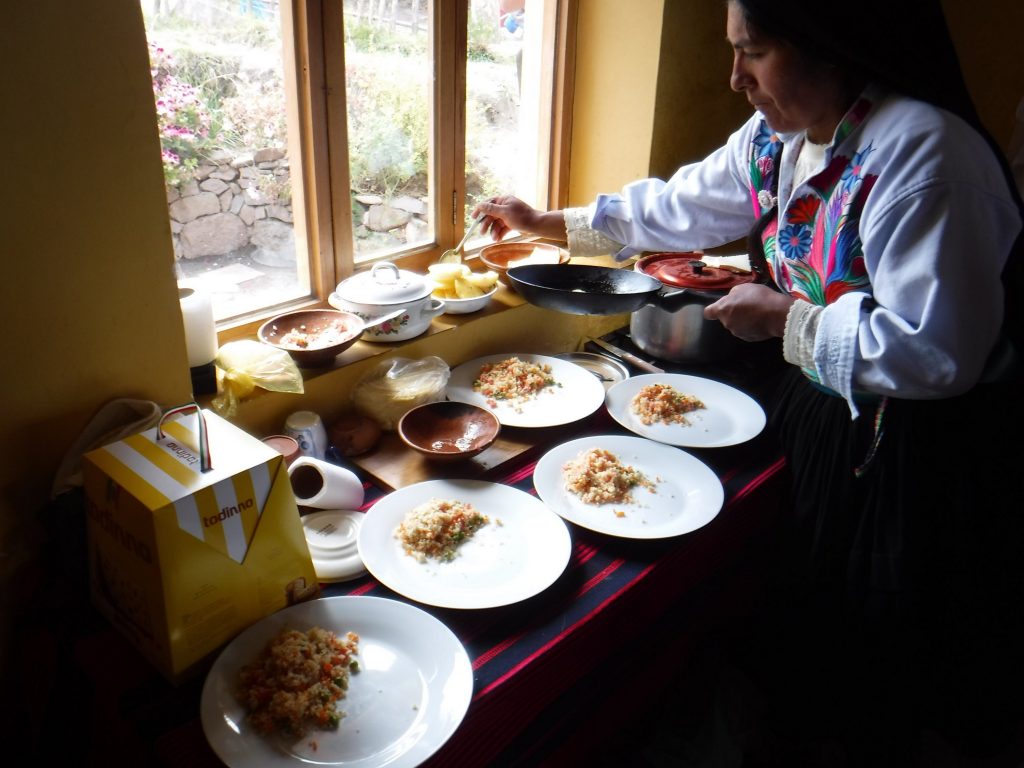 The food was vegetarian, and restaurant-quality: 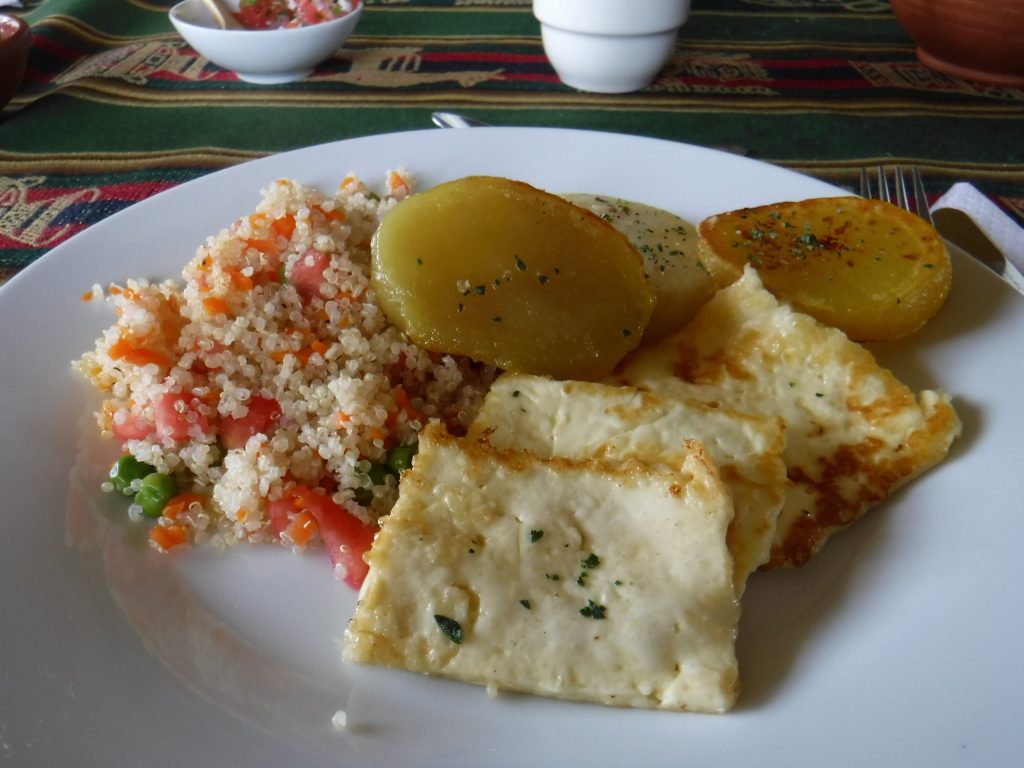 We later realized that the meals we got during our home stay were tailored to tourist tastes. Our host family didn’t eat with us at the large table at the center of the room. Rather, they sat in another corner of the kitchen, and ate different food.

This work of art decorated the kitchen/dinning room wall. I found it quite special: 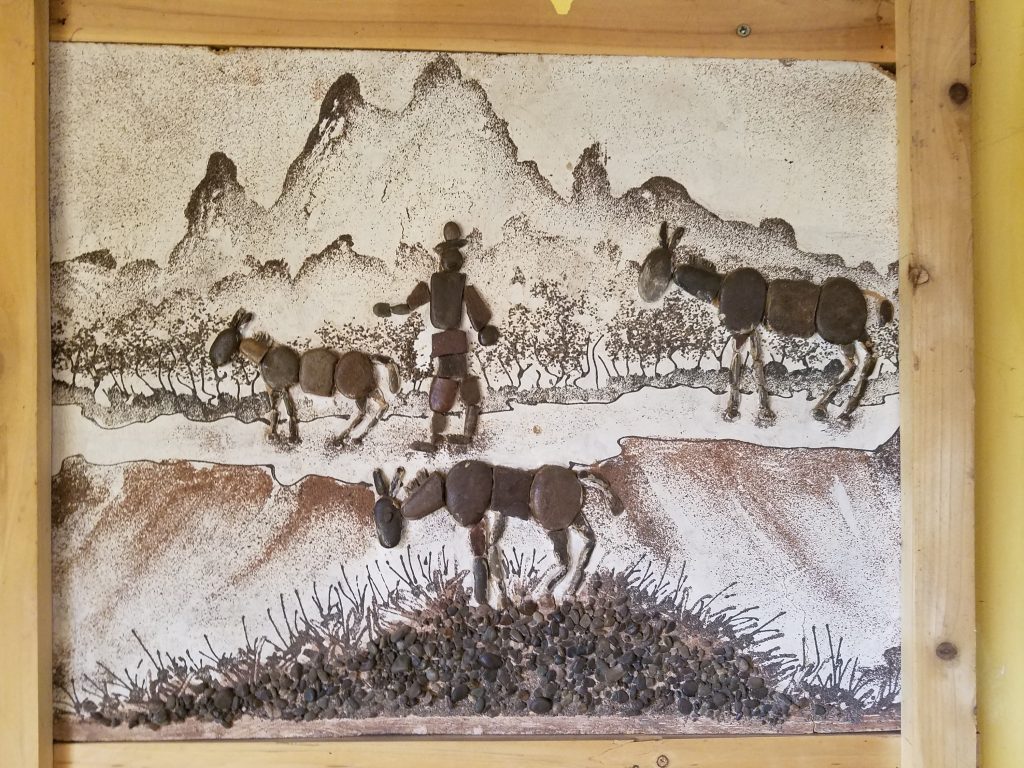 After lunch our tour guide took us on a hike. As we walked through the village, we realized that the entire settlement was in the midst of a building boom. Many of the houses had new wings, just like the one we stayed at. 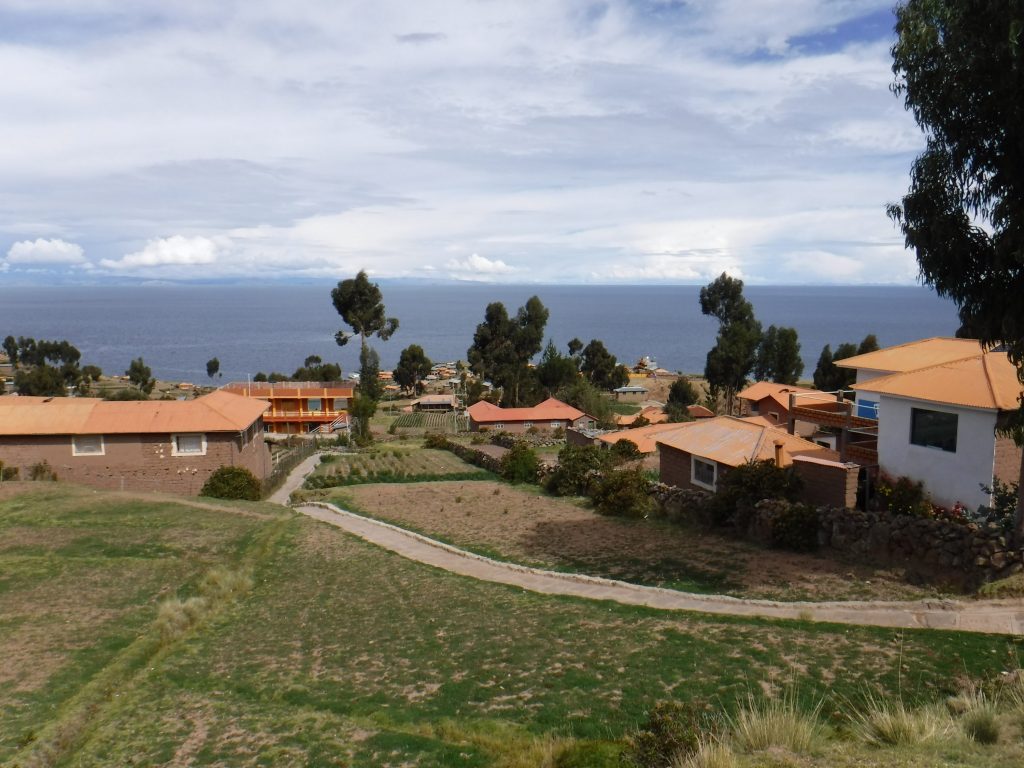 And, indeed, we saw group after group of tourists climbing up the trail leading from the dock: 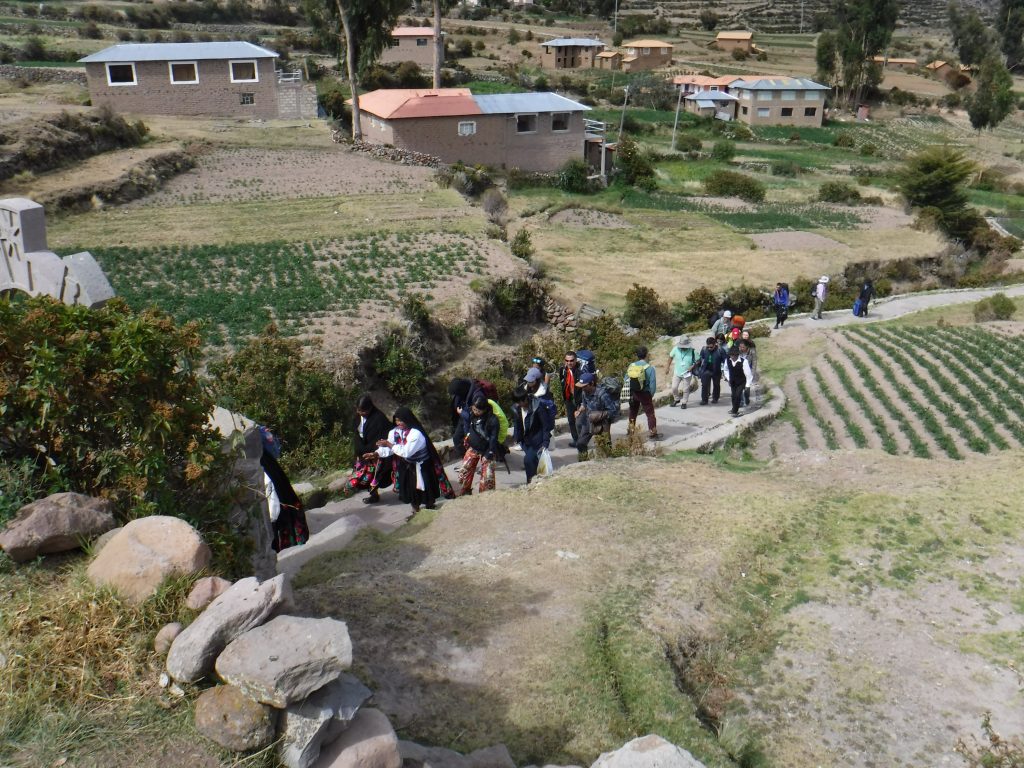 The day we were there, the entire population was working on paving the trails crisscrossing the village. They were trying to complete the work before Christmas, as they were all promised a bonus if they managed to meet this deadline. This was exactly what the expression “it takes a village” was coined for. 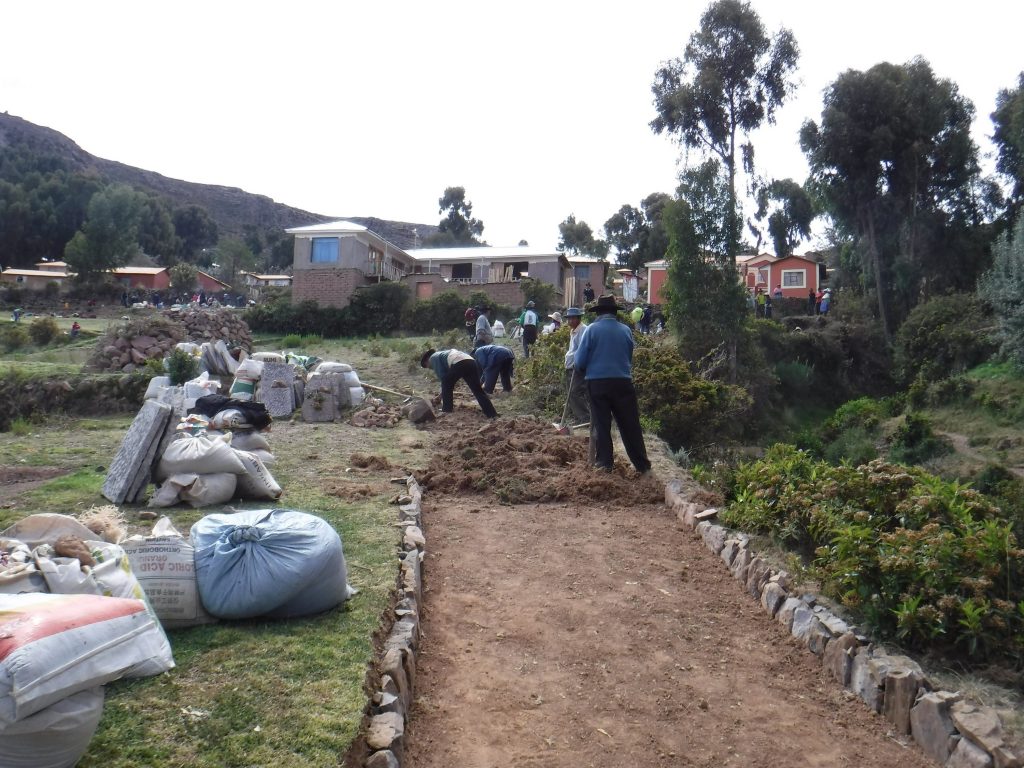 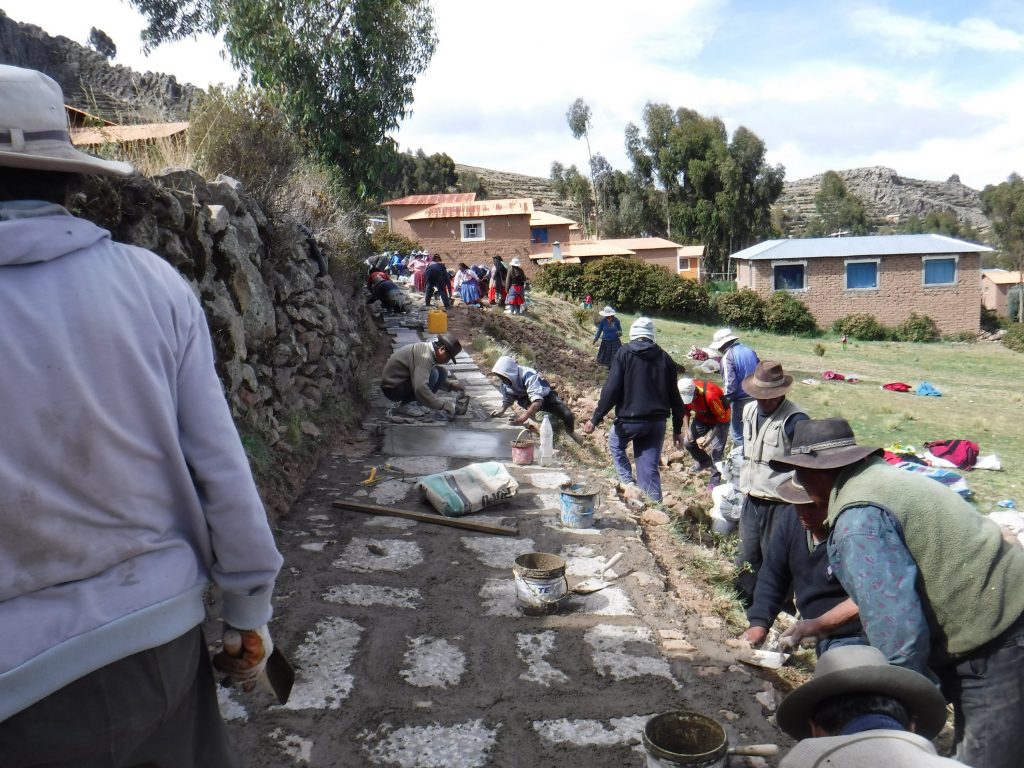 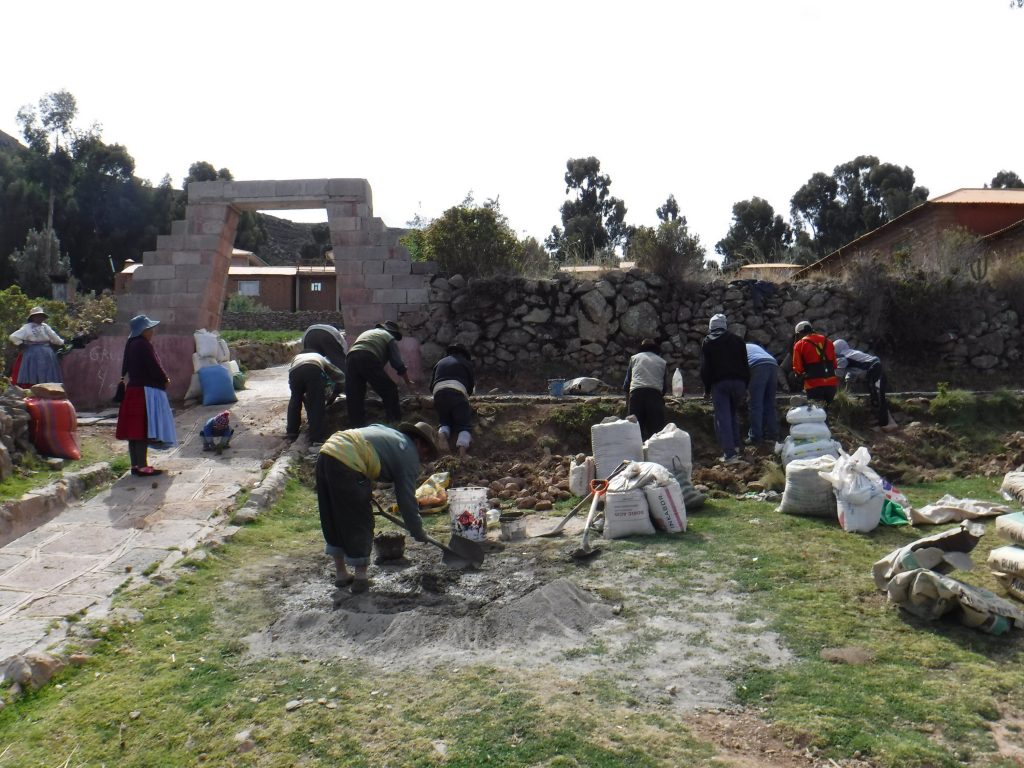 Our guide took us up one of the two mountains on the island, to an open temple dedicated to Pachamama, or Mother Earth. Pachamama is a pre-Inka goddess, and many people in Peru still worship her. The climb was taxing. Lake Titicaca is in high elevation, and the mountain we climbed was even higher. 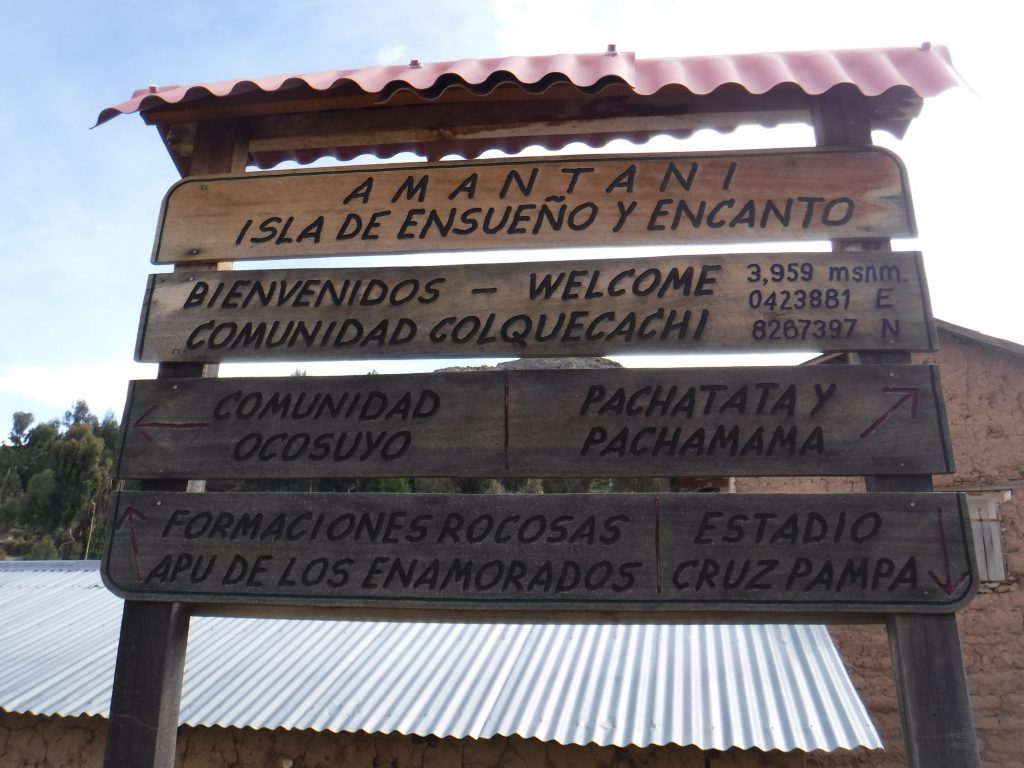 I was struggling to catch up with my kids. Our guide gave me a few dry coca leaved to chew on, to help with elevation and give me some energy. They tested like grass, and I am not sure whether they actually helped or not. 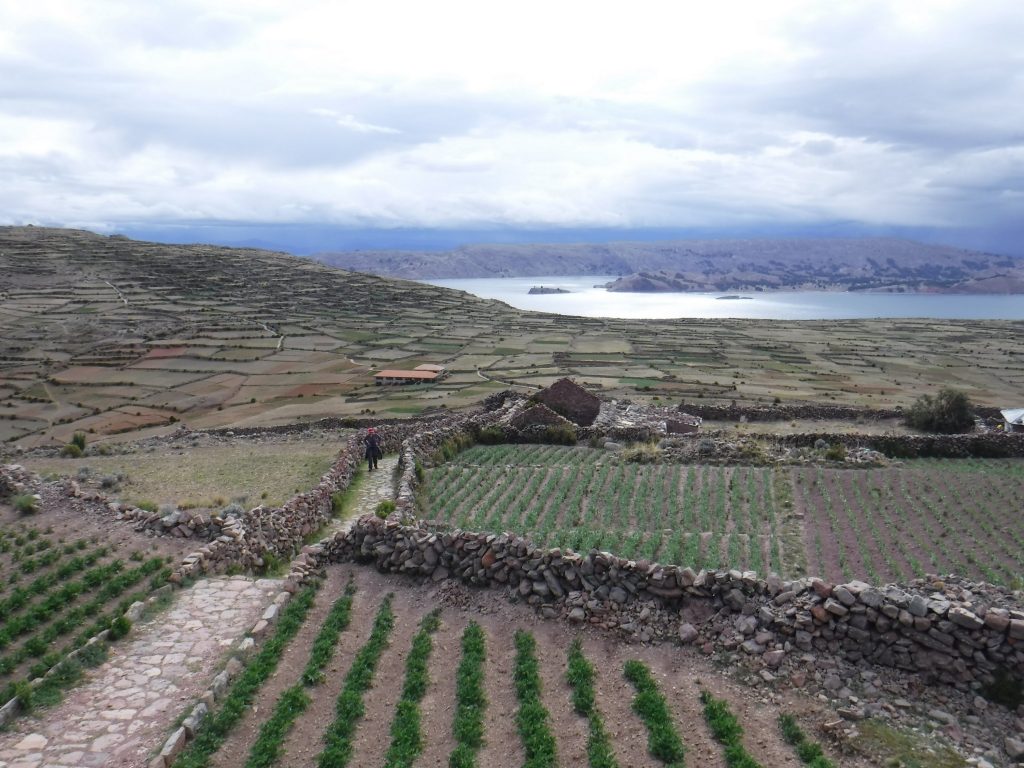 I did make it to the peak, however! 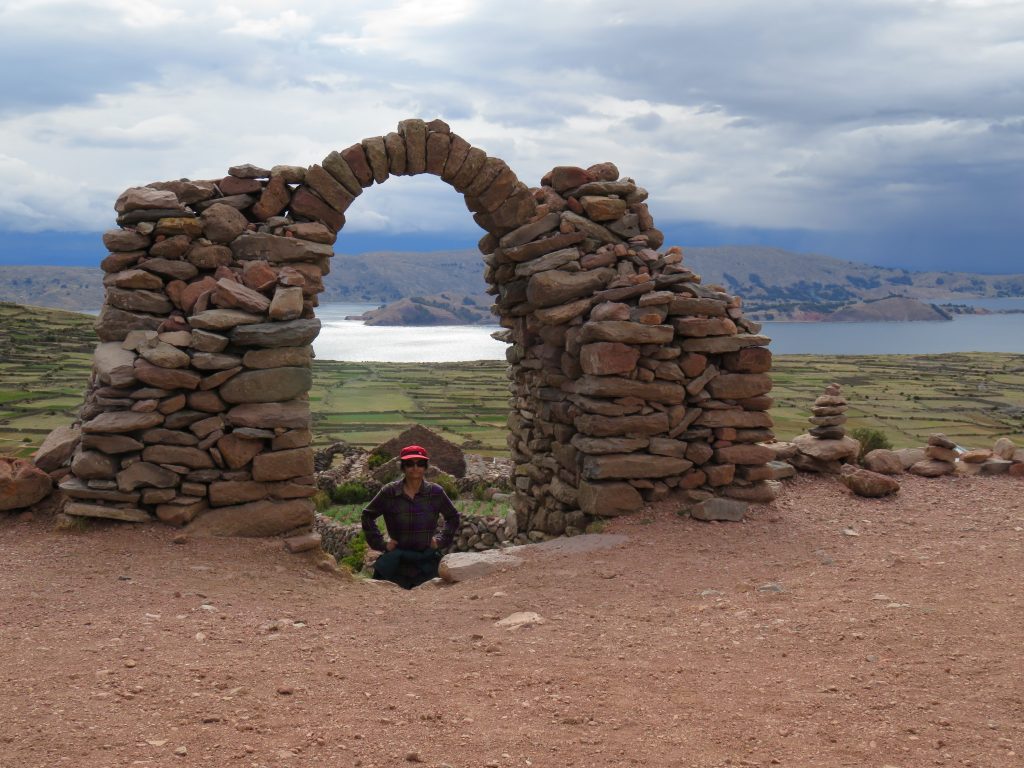 The view was well worth the effort: 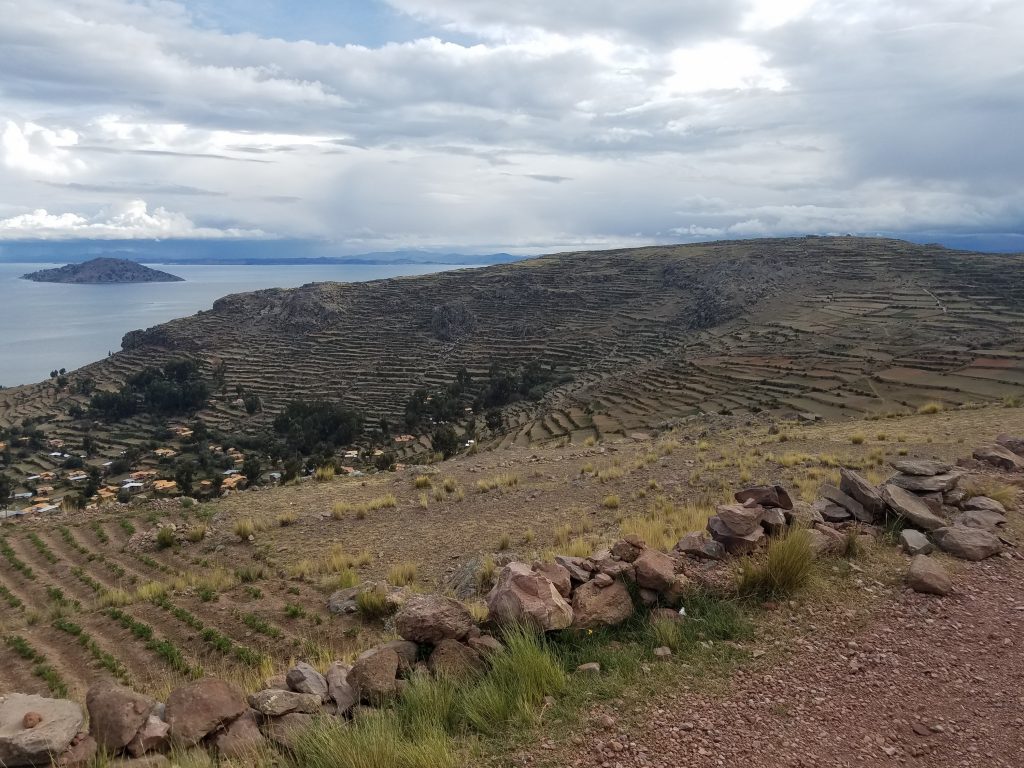 The open-air temple was also interesting. It is usually closed, and only opens a few times a year, when the entire community gathers there for celebrations. 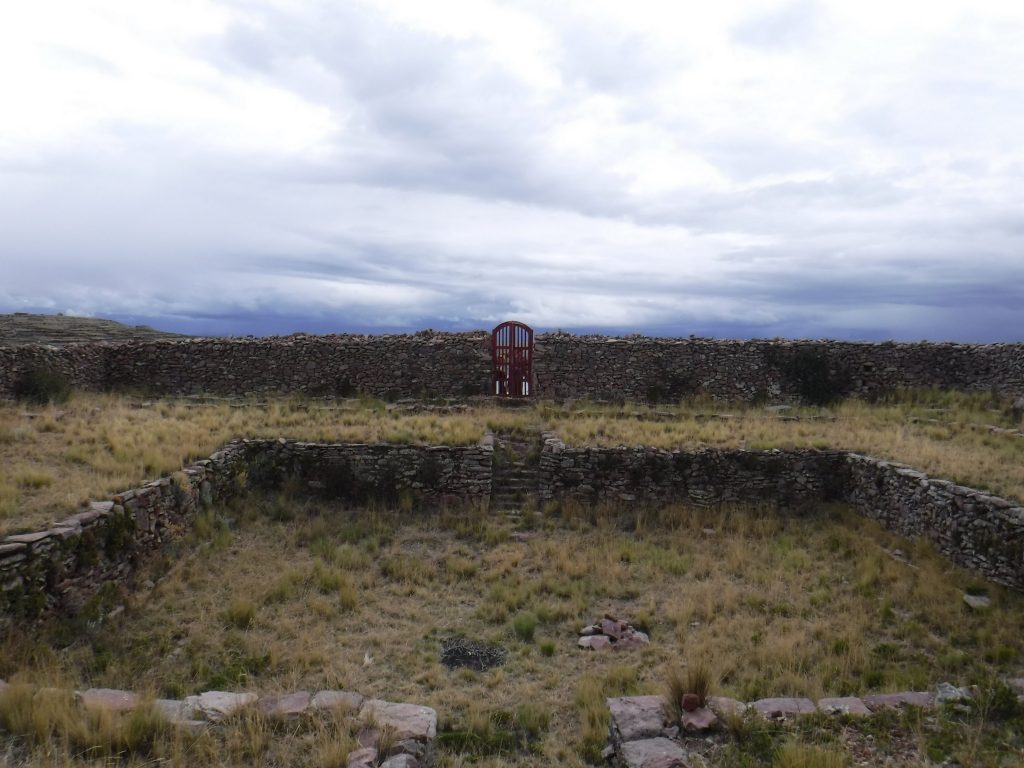 By the time we returned from our hike, the women already changed out of their formal wear and into their everyday clothes. Everyone was wearing hats, since the evenings in Amantani are rather chilly due to the high elevation. The houses on the island don’t have heating. 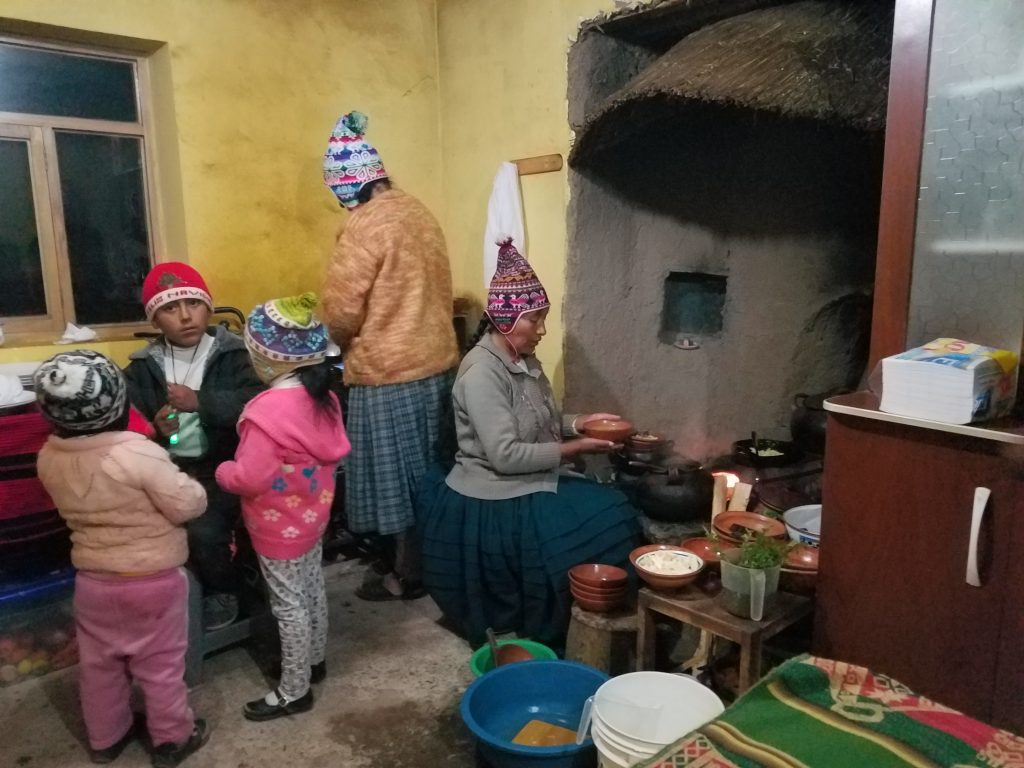 The food was Western, and as delicious as before. After dinner Richard joined us at the table, and we all got to know each other a bit better, and learn about each other’s lives.

The next morning, after a fine breakfast, our host family insisted on dressing us up in local clothes. We then took a few customary tourist pictures: 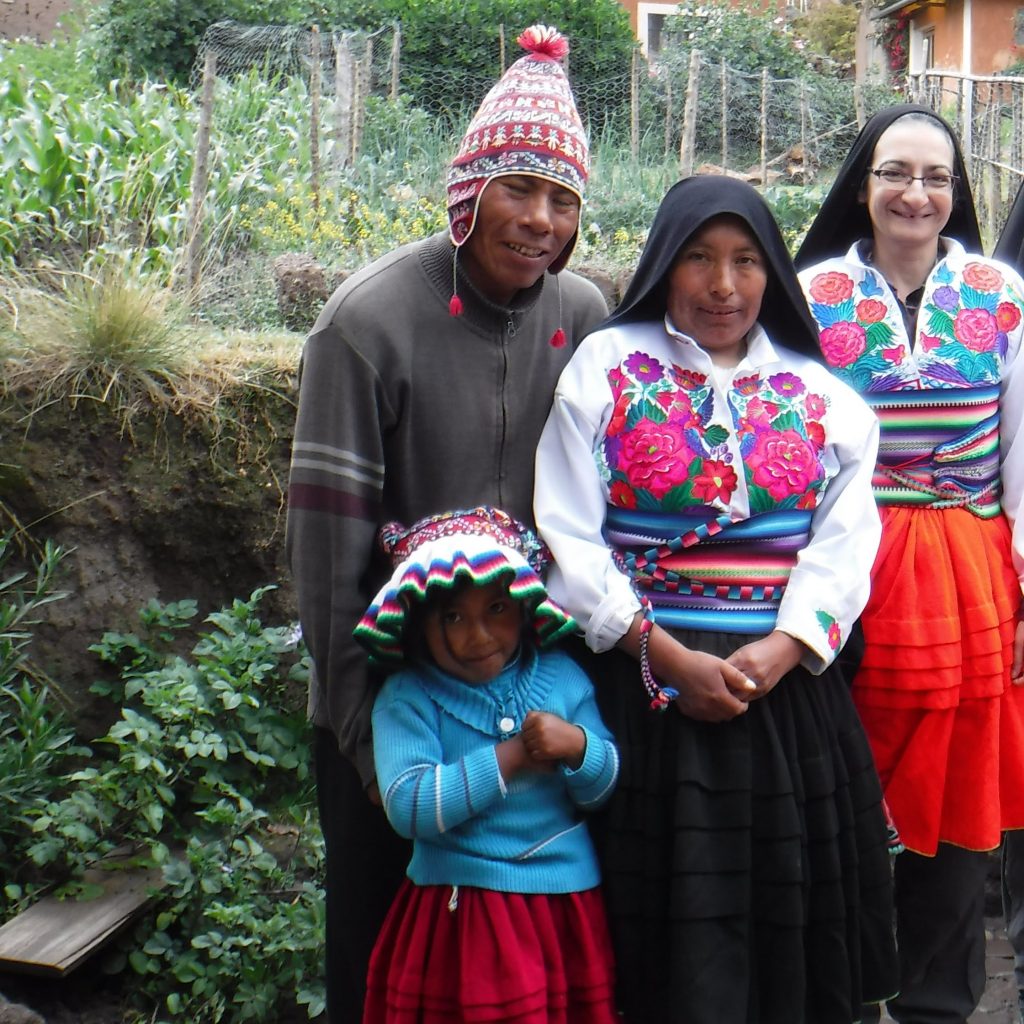 As we were about to leave, our hostess took out some souvenirs she said she made. Some didn’t look handmade, and the rest looked suspiciously like souvenirs we saw everywhere else. Still, we bought something. 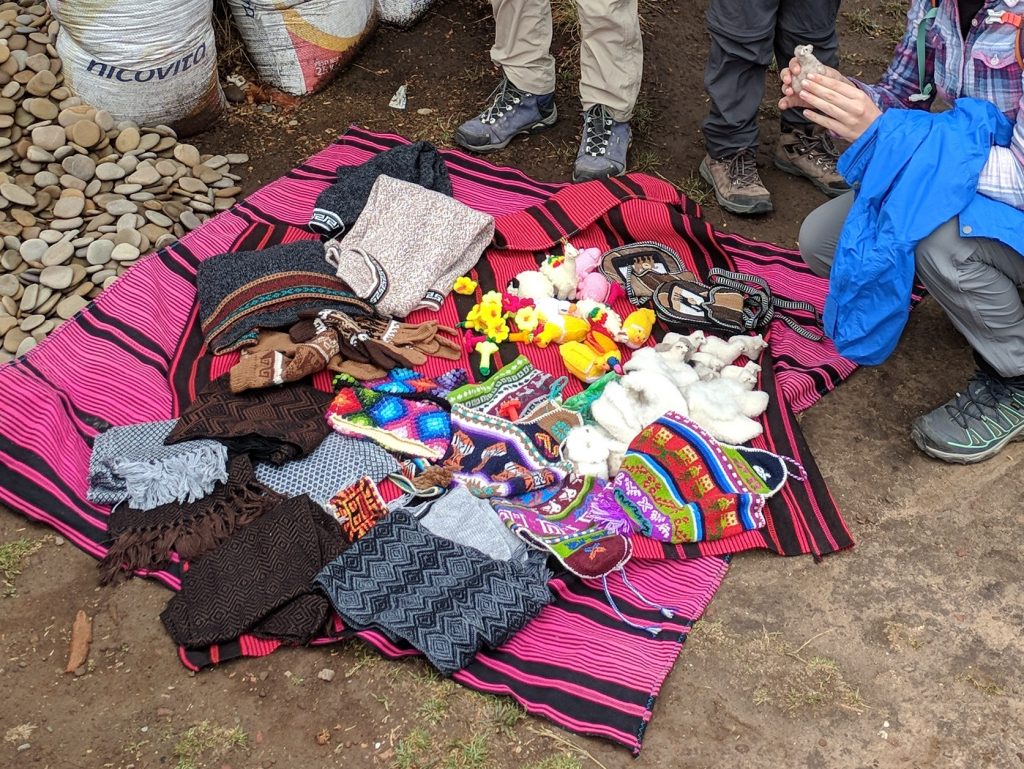 The Effects of Tourism

Traditionally, the inhabitants of the island live off the land. The island is covered with terraces, and to this very day crops are grown on every possible piece of land. We saw some people working the land on our hike up the mountain: 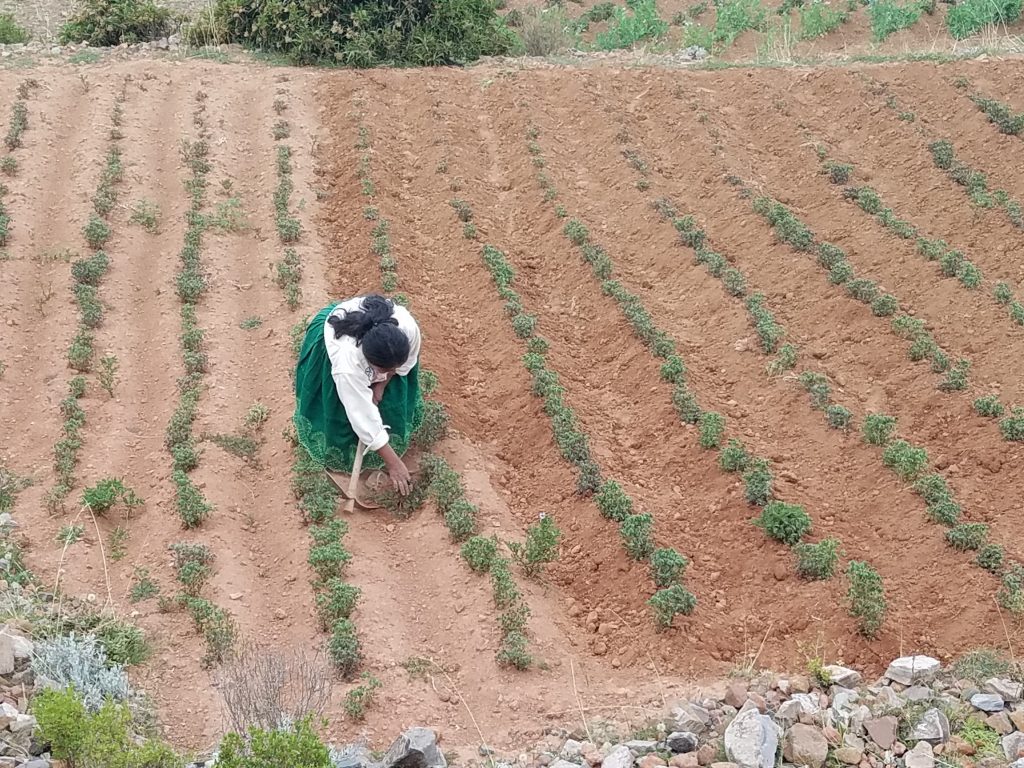 The island’s inhabitants also raise farm animals such as sheep, pigs and donkeys. Nowadays, however, it seems that the local economy heavily relies on tourism, as it does for the Uros people. Tourism is physically changing the island, and is responsible for the wide-spread expansion of houses and the quick paving of local trails. It also changes people’s daily routines, with more and more families spending much of their time catering to tourists. Our hostess’s daughter and her cousin were playing with toys that former tourist-guests gave them. The changing of local diets and other habits is probably just a matter of time.