Our planet is fraying at the seams. The cycles of nature are out of sync. Our oceans, especially—the cradles of all life on earth—are swinging out of balance. Human overfishing has broken the laws of nature on the one hand, leading to the near-collapse of marine ecosystems. Our trash, on the other hand, is filling the ocean with debris, much of it consisting of non-decomposable plastics.

Between 8-14 million tons of plastics end up in the ocean every year, killing over one million marine animals annually. Plastic floats on the ocean surface, sinks to its depth, and reaches all the way down to the seabed (see some pictures here). Ocean currents collect some of this plastic waste into “garbage patches.” There are currently five such patches, the most famous of which is the Great Pacific Garbage Patch, which is about the size of Texas. These patches are such a permanent presence in the ocean, that scientists have recently discovered that marine animals started colonizing them. Plastic trash is now found in the most remote corners of earth, polluting every beach and reaching down to the deepest cervices of the planet.

Plastic doesn’t decompose, but the elements grind it into tiny particles called microplastics. Microplastics, too, are everywhere, on land and sea. Marine animals ingest then. Humans eat those marine animals. Microplastics are now found in rainwater, in the air we breathe, in baby poop and in human placentas. If you think that plastics in the ocean don’t effect your health, think again. The problem of ocean plastic is most definitely our problem.

Some art works come together quickly, and others take a long time to form. Blue Planet Blues took months and evolved over time. I started it on an impulse back in August 2021 as an artistic experiment. I wanted to:

I chose a blue, purple and mustard palette, and started piecing the patches together. 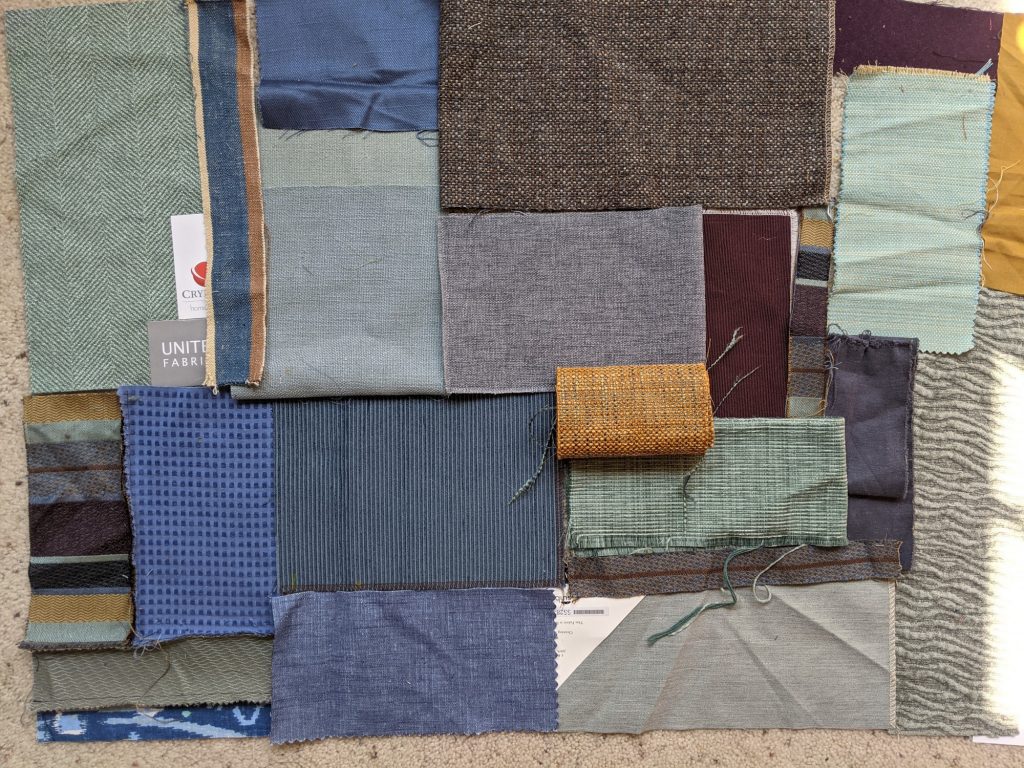 Leaving the seams outside, on the “wrong” side, was harder than I expected, and required a lot of concentration. Despite my efforts, I made a mistake (and eventually decided to leave it. Can you find it on the quilt?). I chose to leave the seams raw and to let them fray, the fraying becoming a part of the work. 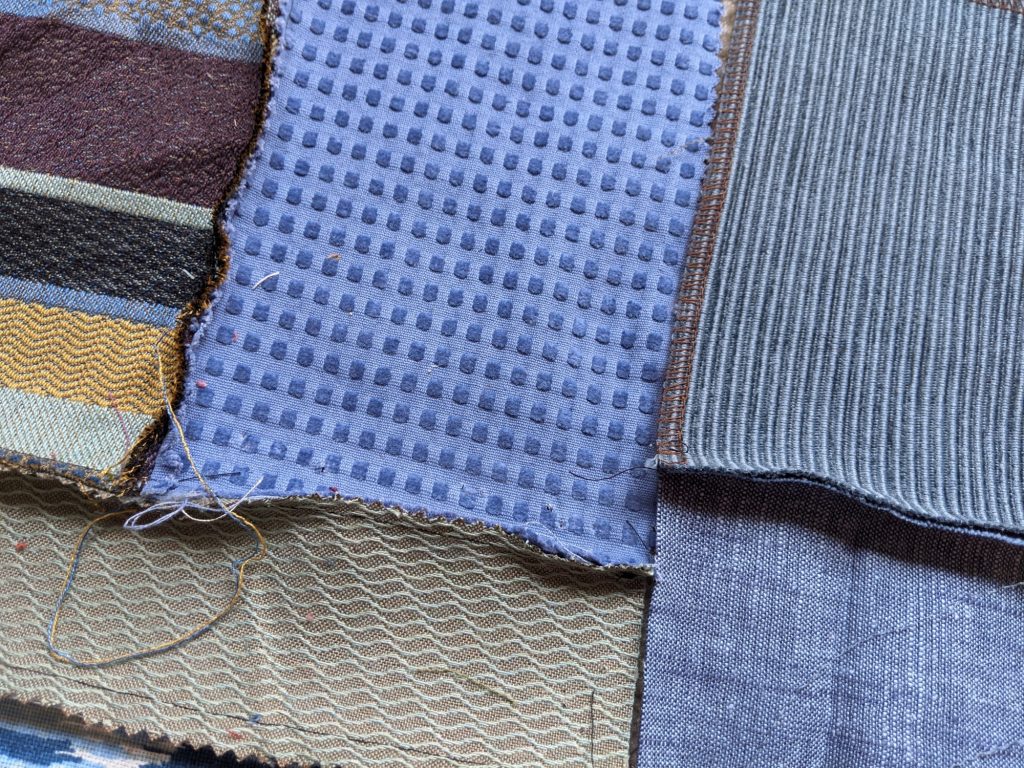 My progress was very slow, as I worked on this in-between other projects. I gradually added fabric pieces, until I had a 24″ x 30″ rectangle. Then I sandwiched it, and used a free-motion foot to draw black lines on the inside perimeter of each patch, right inside the seams, stressing the seams themselves and affixing the top to the other layers. I didn’t strive for perfection with these lines. Instead, I let my machine and the fabric control the outcome, resulting in wobbly, organic, imperfect lines. 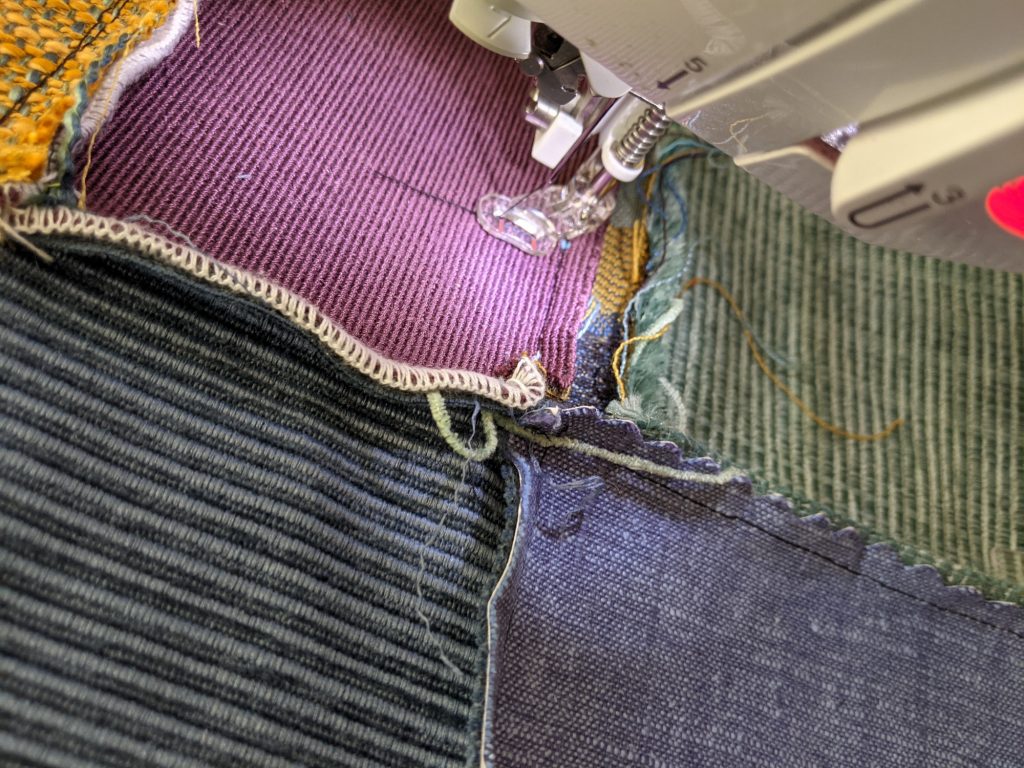 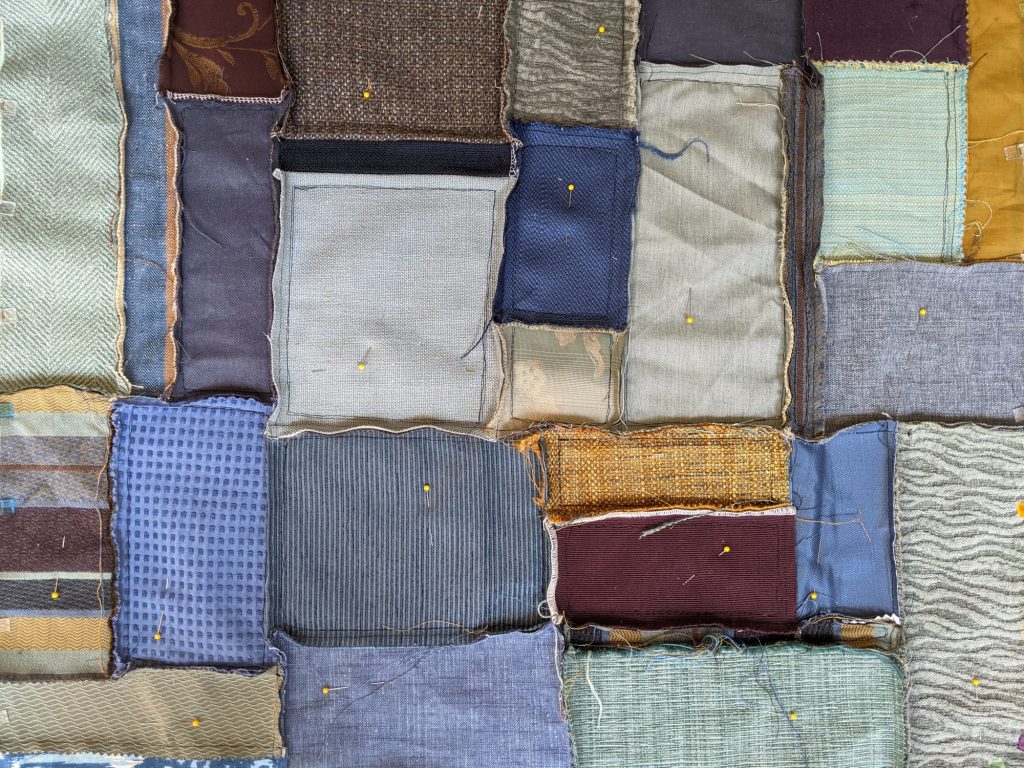 I thought of using the patchwork base as a platform for slow Boro stitching, as an excuse to play with different Sashiko stitches and thread colors. In-between working on other things I started doing exactly that. 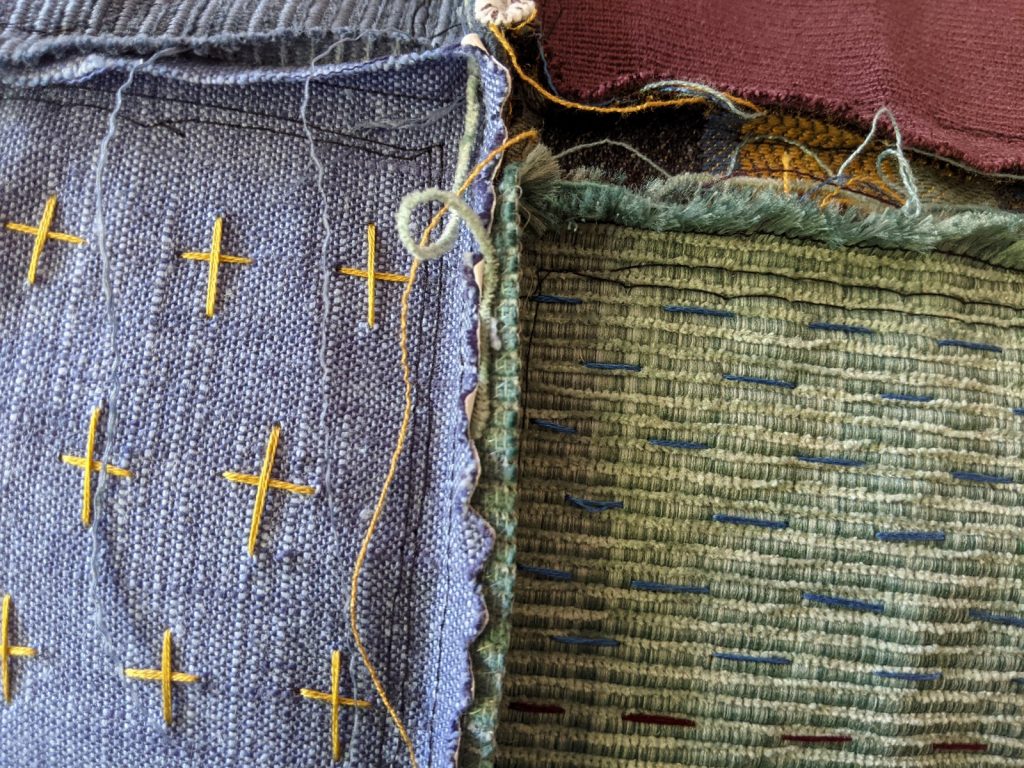 In October I traveled to the other side of the world to see my mom. I didn’t physically take my art with me, but this quilt still came along, in my head. I started thinking of a name, and of turning it into something more meaningful. “Blue Planet Blues” popped into my mind because of the main color, and I immediately realized this quilt was never meant to be only about the elements of art.

In my parents’ house, my late father is present everywhere. He was a marine biologist specializing in phycology and the ecology of marine vegetation. His home office, which remains untouched, still holds the collection of his articles and remnants of his dried algae collection, as well as some diving gear. Sitting in his office chair, looking around, I remembered his strong love for the sea and the creatures living in it. The puzzle pieces started felling into place.

Upon my return home, I slowly resumed work on this piece. I delved into some research, then chose a few statements to incorporate into the quilt. Working on one patch at a time, I stamped, appliqued, drew and hand stitched words. Some patches took a few days to complete. 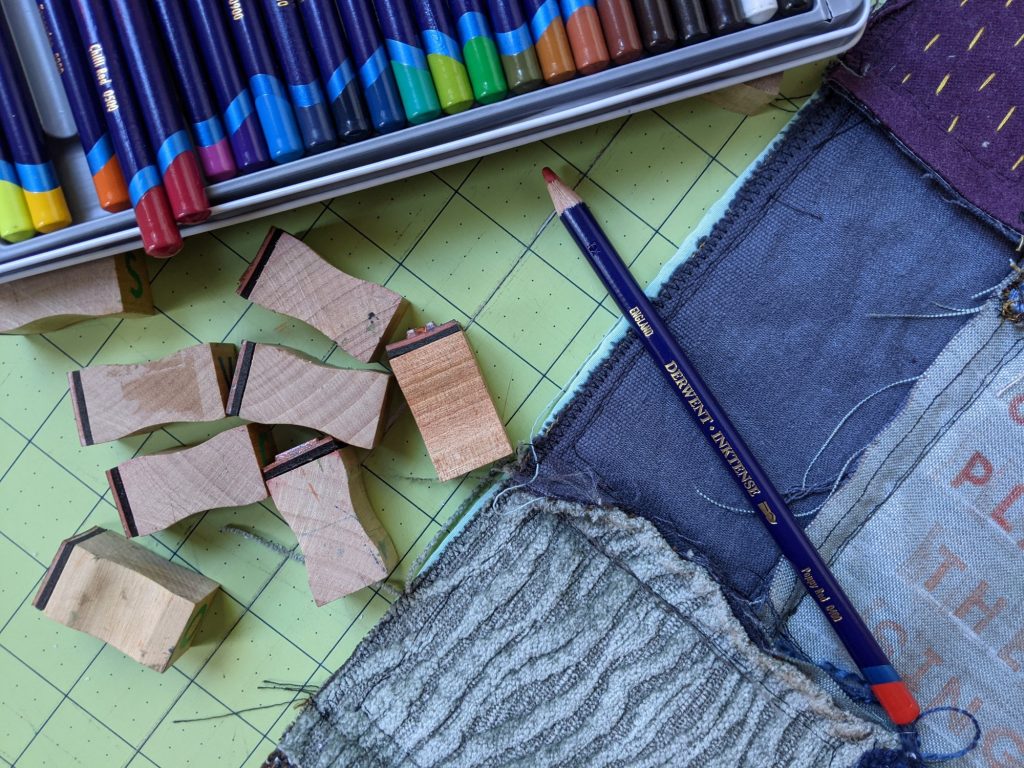 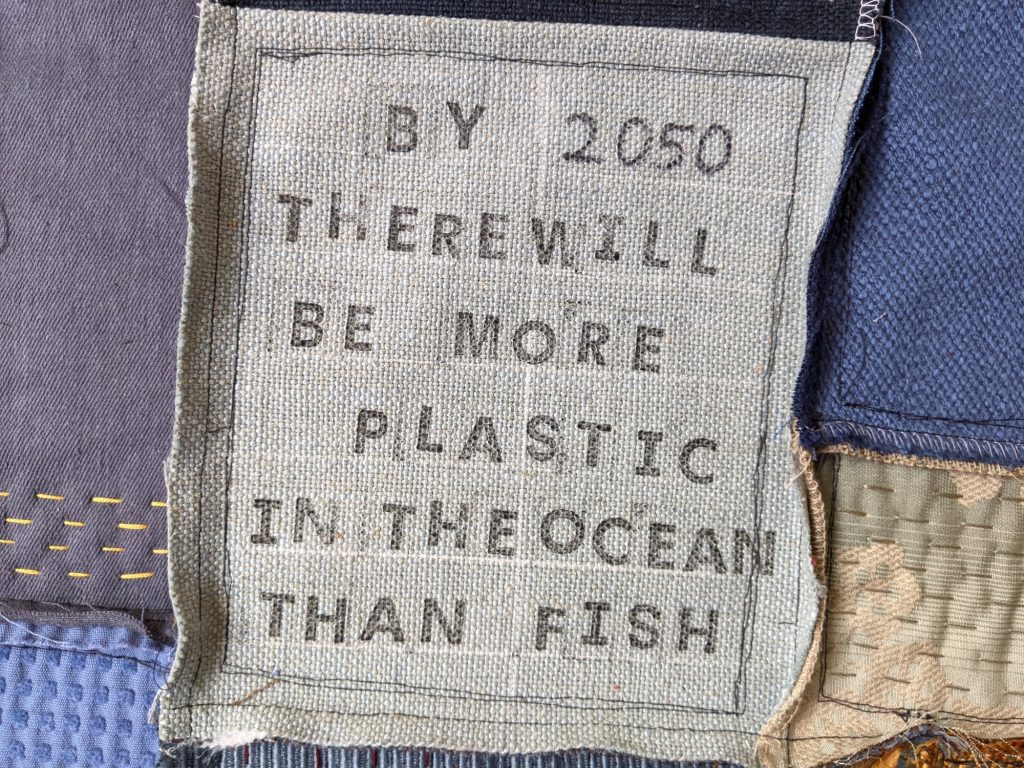 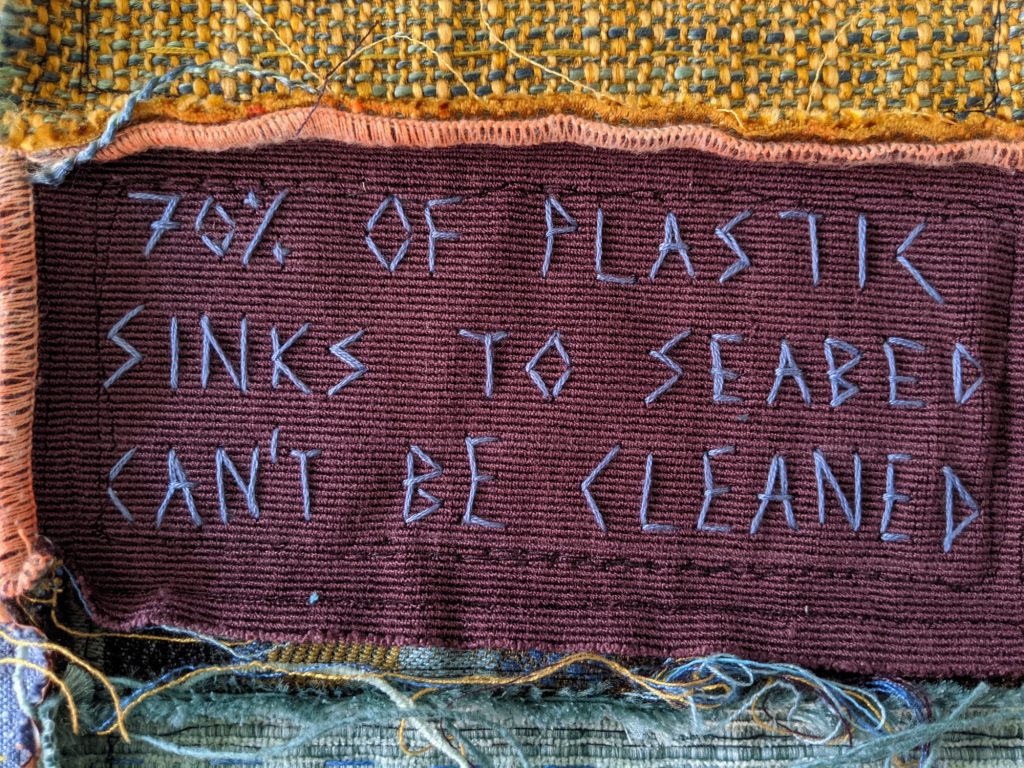 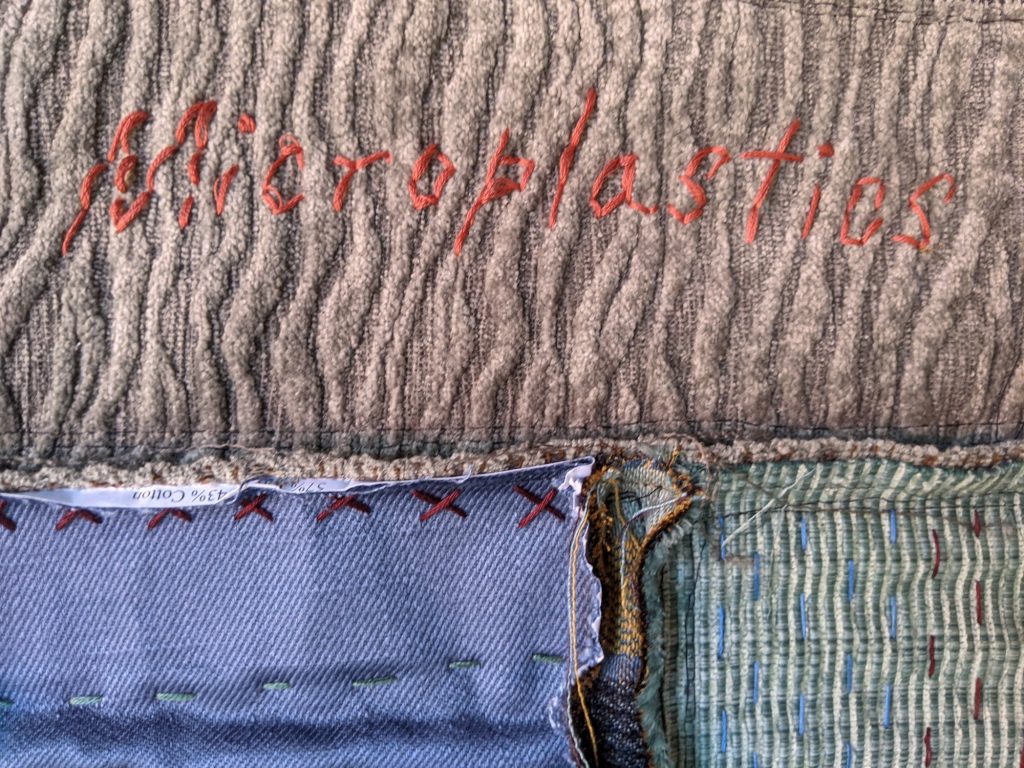 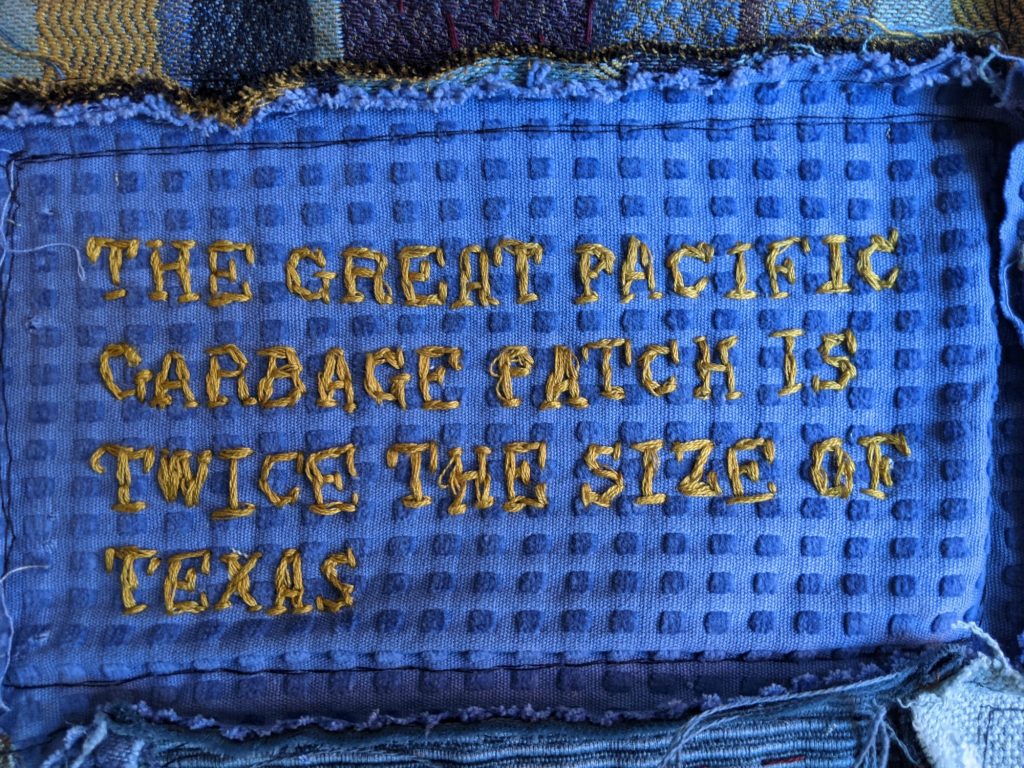 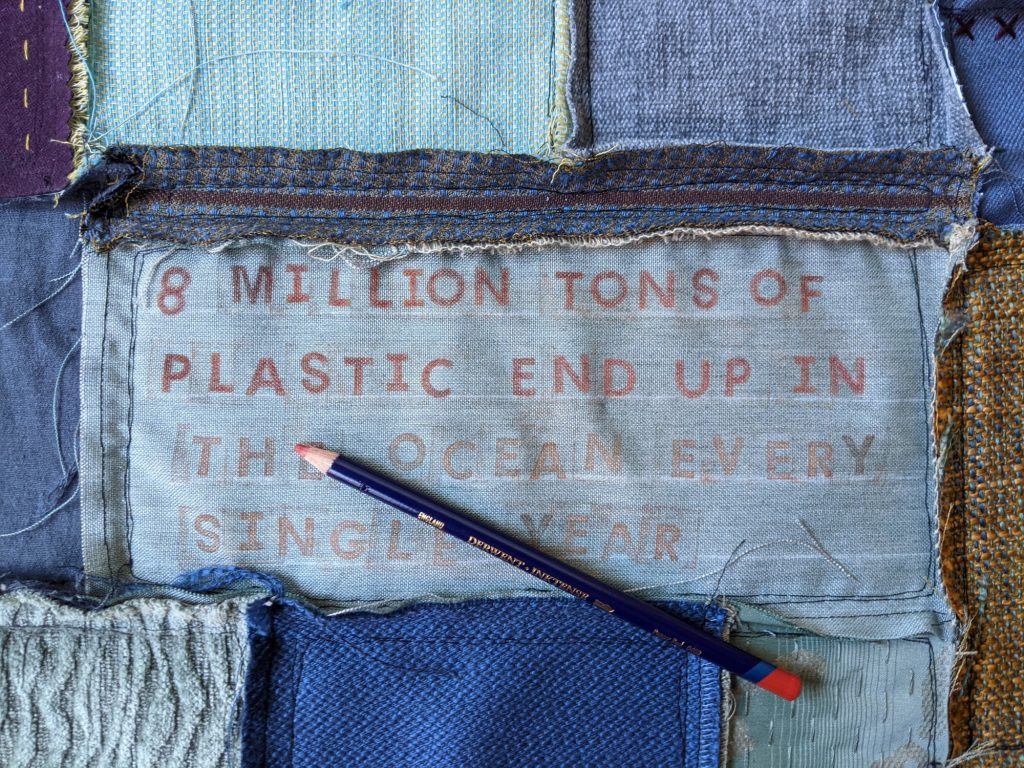 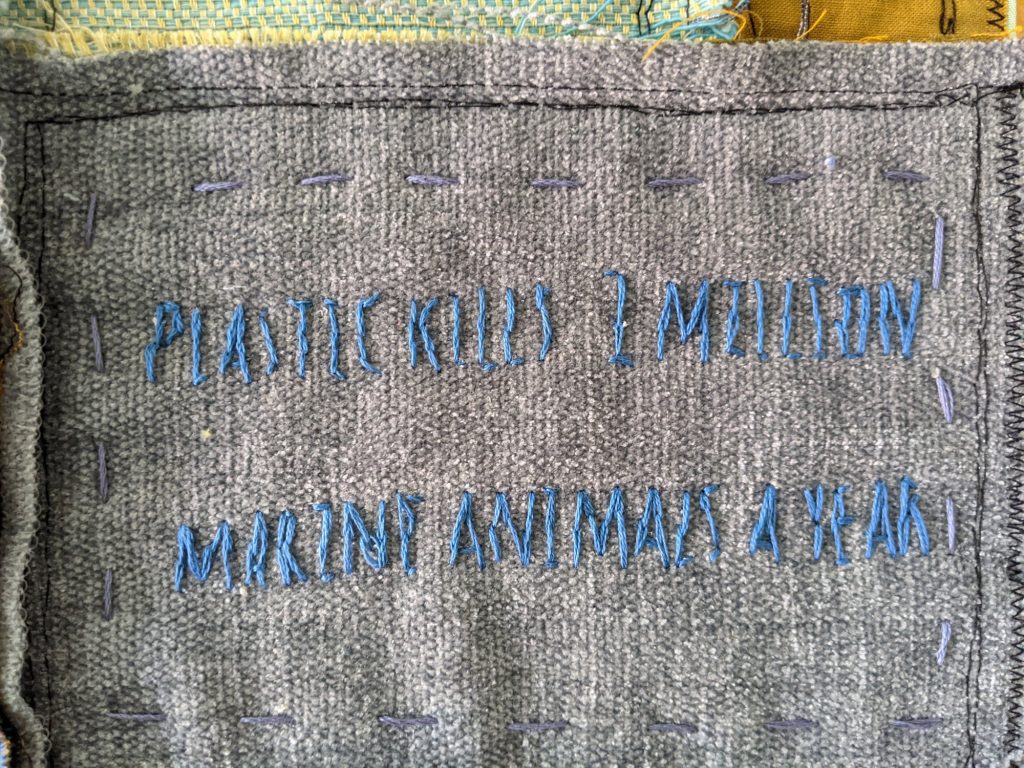 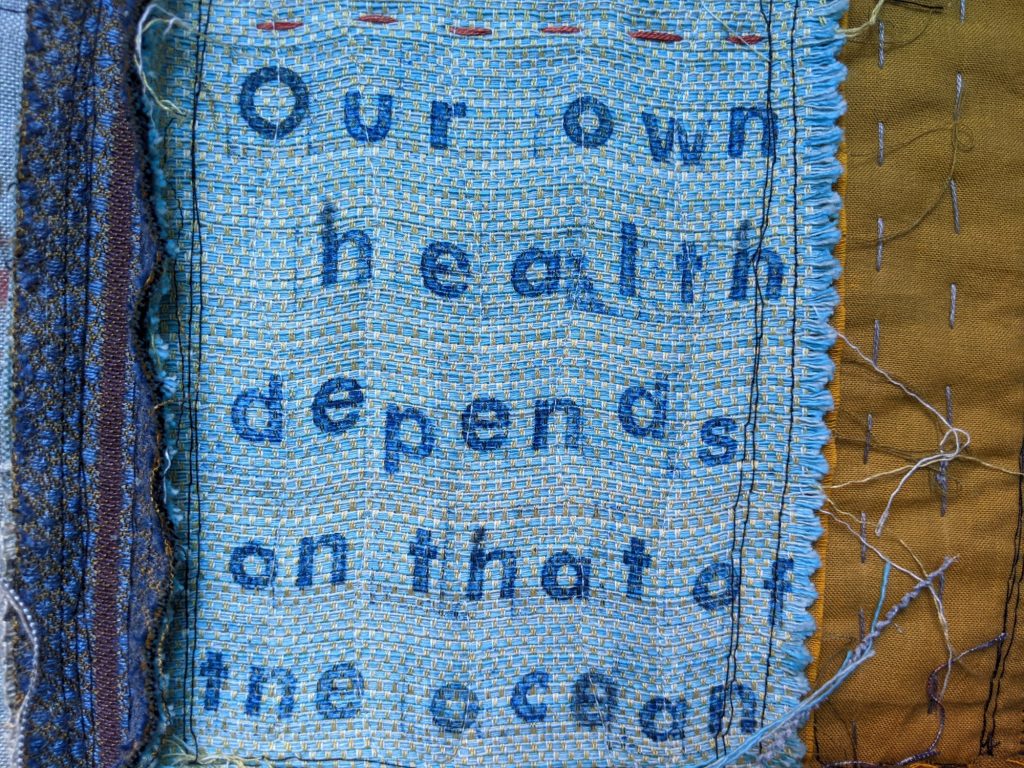 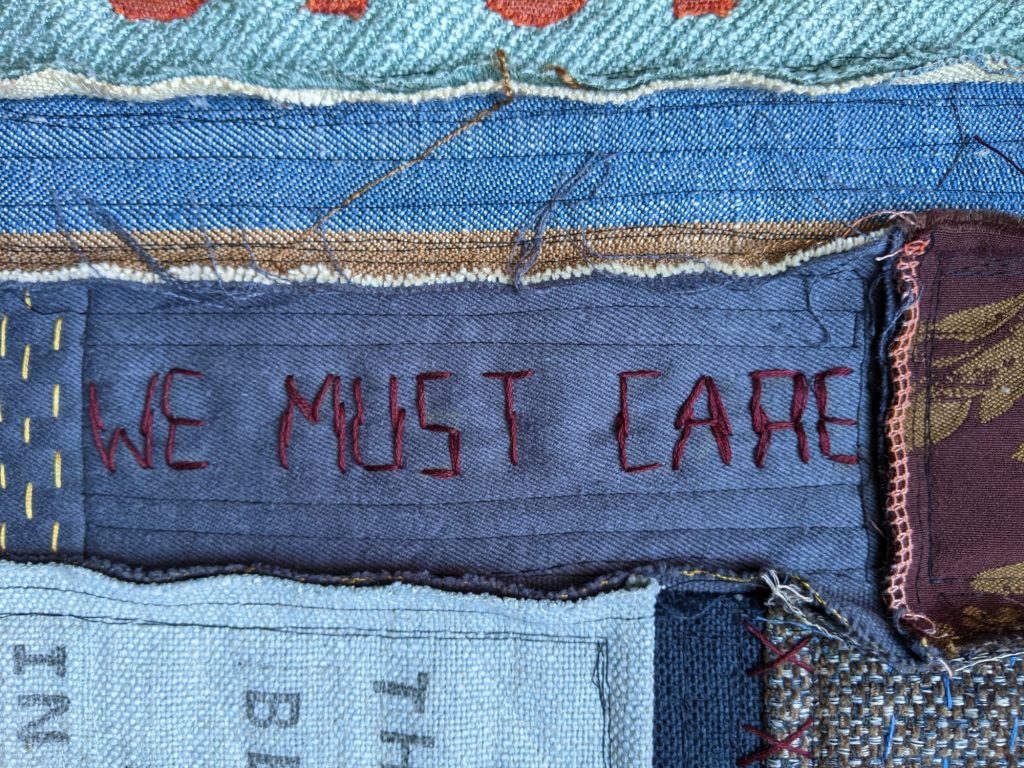 Eventually, all the patches were filled. 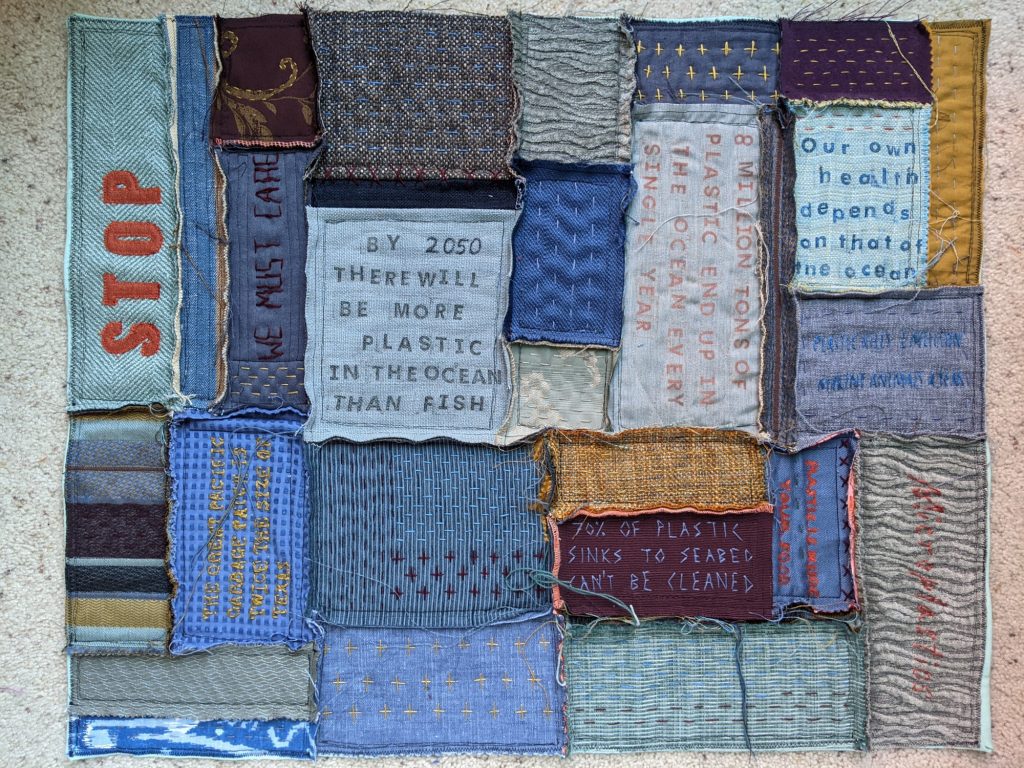 This was slow work, and slow work is often a kind of meditation. When the mind partially empties, new ideas form. At some point I realized the quilt wasn’t complete yet. One of the statements, the one that stated that “In 2050 there will be more plastic in the oceans than fish” gave me an idea of how to finish it.

The above statement reminded me of Fred. 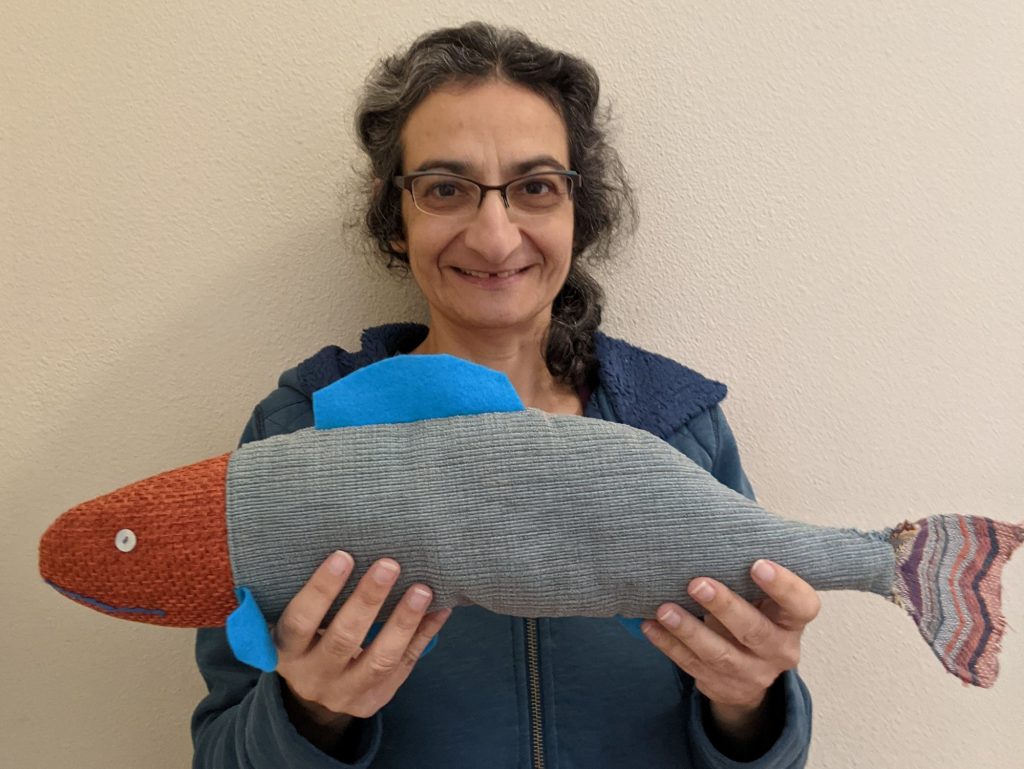 I made Fred a few years ago, as a part of a small school of fabric fish. I created those fish for fun, just because I thought textile fish were cute and I wanted to try making some. My son took one little fish for himself. A few others sold at craft fairs. Frank, the biggest of them all, never found a forever home. He drew a lot of attention, but was never adopted. And so, he waited patiently in a big plastic box deep in a closet, along with other unsold creations. Now I found him a perfect use.

I knew I had to incorporate actual plastic, too. I decided to add plastic bottles, a commonplace, single-use disposable item. At first I thought of tying the bottles to the quilt with strings, and somehow attaching Frank to those. But then I thought that strings might get tangled and cause problems. So I decided to go for a more sturdy structure, albeit an uncommon one. This was where my years of bag-making skills came in handy! 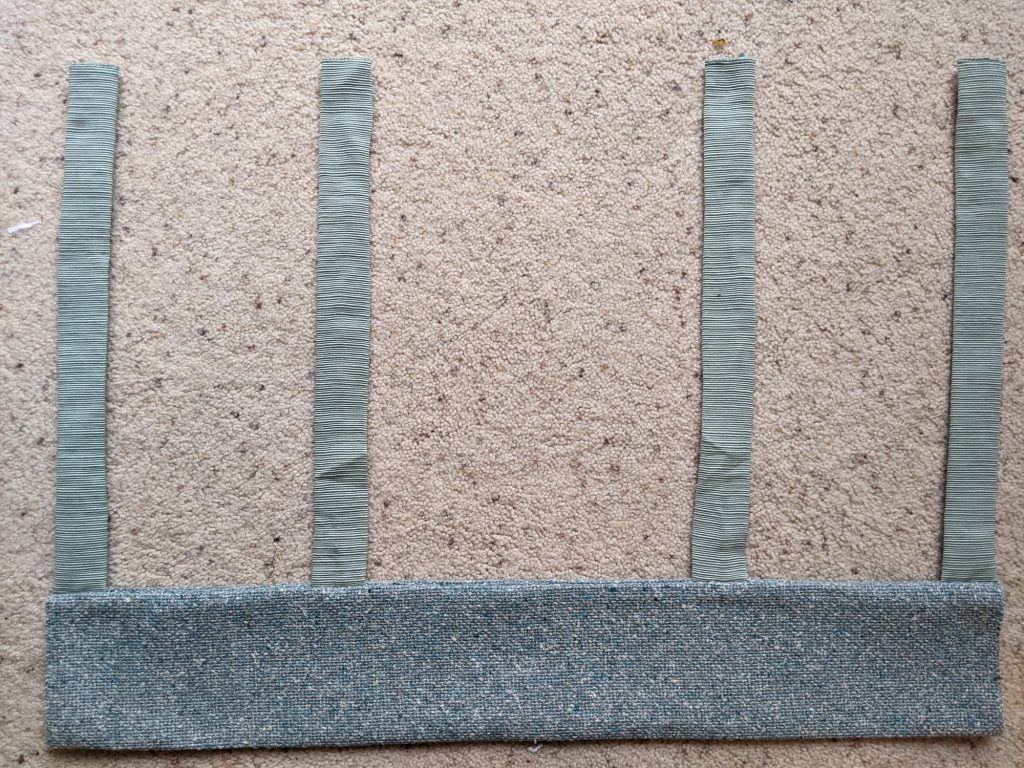 When I put everything together, Blue Planet Blues was complete. It is 30″ x 45,” my largest artwork to date. 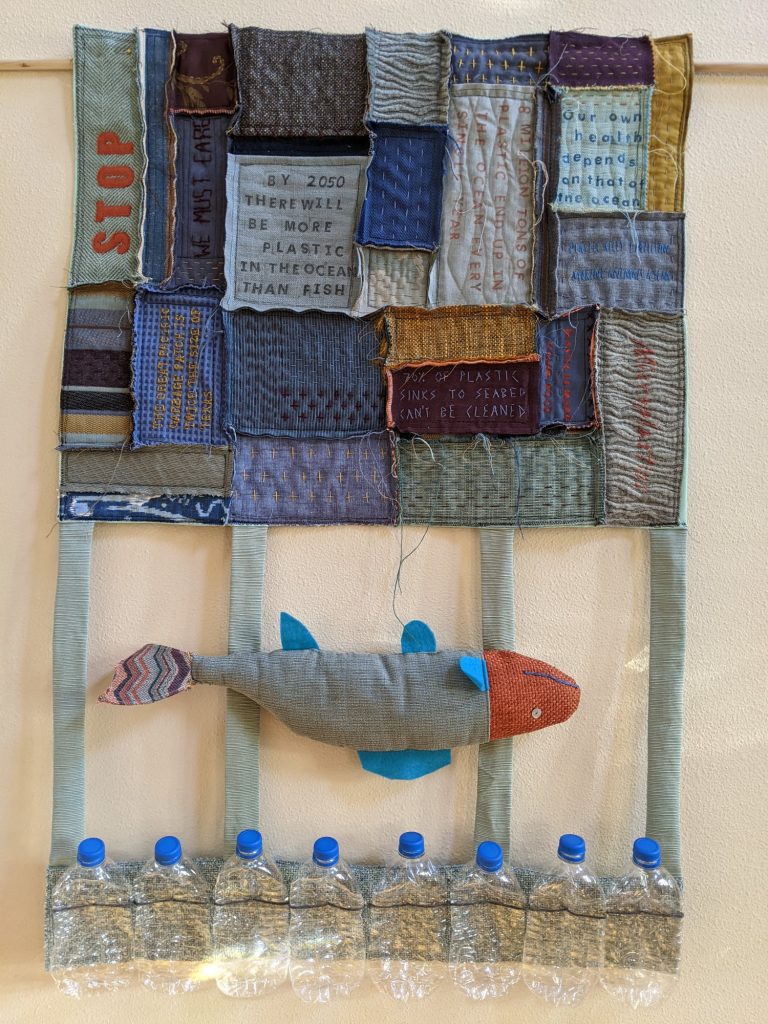 I am dedicating this art quilt to my father, Dr. Yaacov Lipkin, who devoted his life to the study of marine plants and who respected marine ecosystems and cared deeply about them.

You can find more about my father in this publication, pp. 43-44.