Behold the Future! An Art Quilt

I am terrified. For myself, for my children, for humans in general and for all the creatures sharing this planet. It feels like the world is out of whack. The Climate Change we vaguely heard about in our youth, that calamity we assumed will not happen in our lifetime, is suddenly here. Humans fell asleep at the wheel, and the climate changed. Researchers now estimate that 85% of the world population has already felt its effects, and that children born today will experience seven times more climate disasters than previous generations.

In the last couple of years we witnessed not only a worldwide pandemic, but also floods, droughts, earthquakes and wildfires. Here in California, we seem to have a new, fifth season. In addition to the normal fall, winter, spring and summer, there is now also wildfire season as well, squozen somewhere between summer and fall.

Last year we couldn’t leave the house for almost two months because the air was so thick with smoke it was unbreathable. That was what inspired me to create Ashes. This summer we were lucky to be spared–until the end of August. Then, we once again woke up to that familiar, eerie orange light and to unhealthy air. 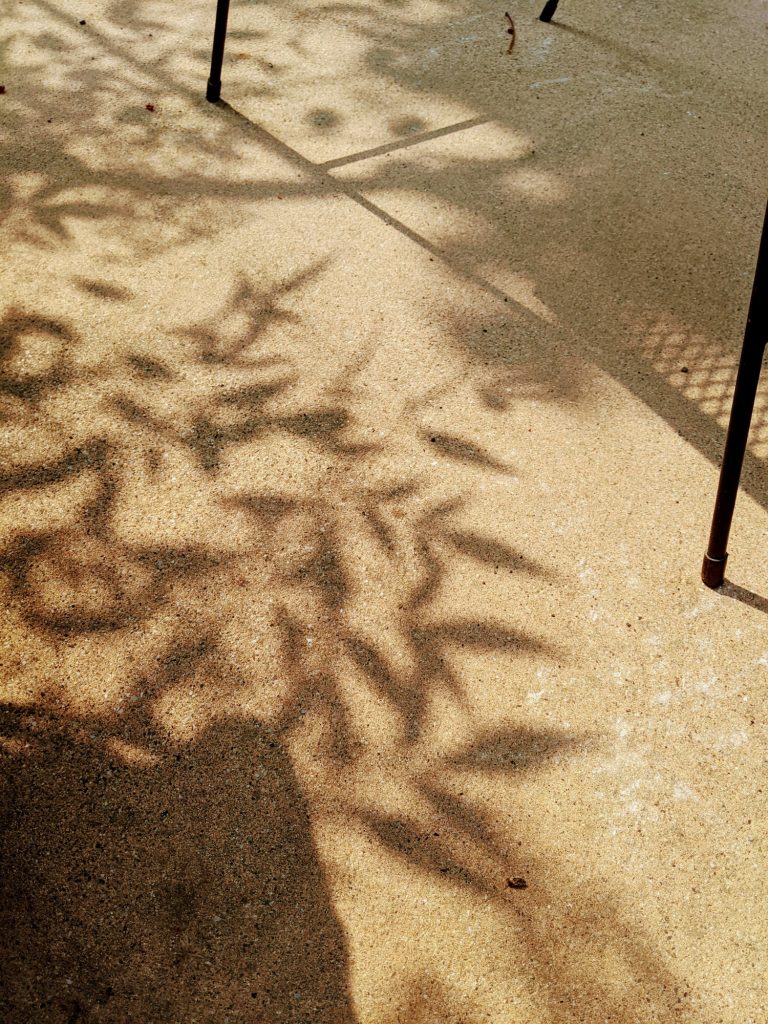 Unable to spend time in the garden, I went into my studio and started cutting flames. 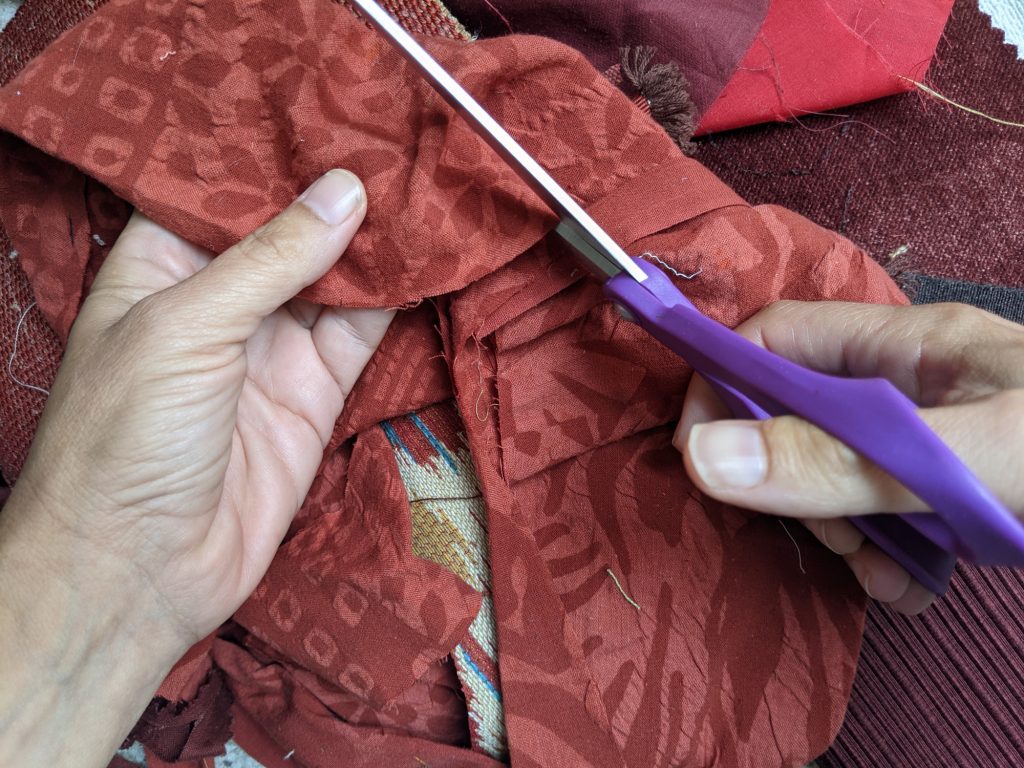 My summers are dedicated to family. I hardly ever create art over the summer, lockdown years excluded. This summer was no exception. But while I didn’t physically make art, my brain was working overtime planning it. Often, I am torn between making art for fun, and creating more serious, message-filled works. I can see the value in both, and seem to need both. In the spring, I made playful, fun art, filled with the colors of new growth. But there were also some serious issues I wanted to address, related to current events and the state of the world. Over the summer, I created images in my mind, and was eager to translate them into fabric comes fall.

Right as I was about to get ready to start, this quilt penetrated my mind. It came suddenly, as a complete image, but posed some technical firsts and challenges I had to figure out. Eventually I decided to just experiment.

Because it was supposed to involve two separate, asymmetrical parts, I decided to attach the fabric pieces onto fusible interfacing first, and leave the batting and backing whole for stability. And so, this quilt is made out of four layers, not three.

The quilt started with the flames of wildfires, similar to those that kept us at home, and which burnt places we used to vacation at. 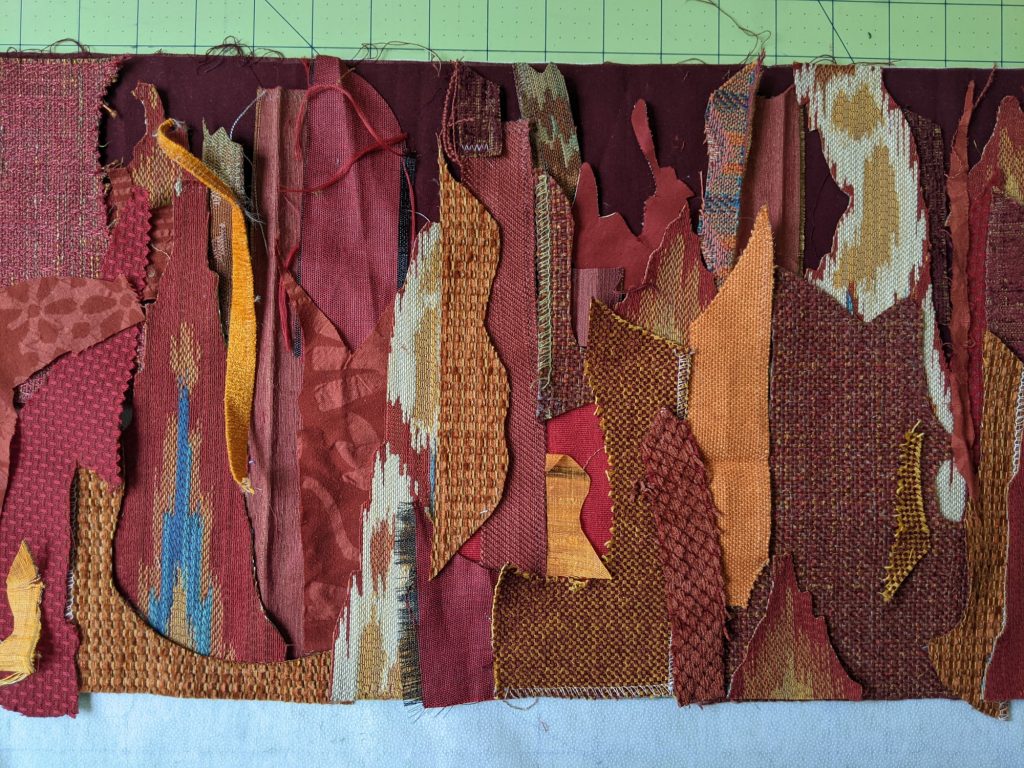 I first placed the flames onto the interfacing, then roughly stitched them on. 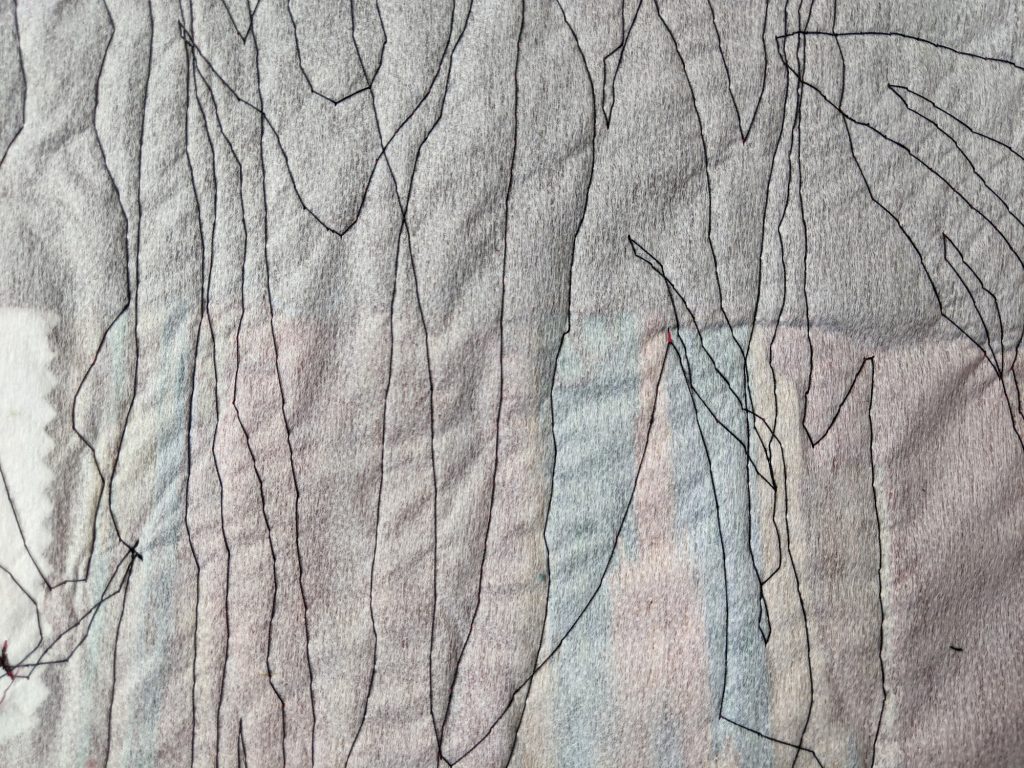 Later, I used the iron to fuse them on as well.

After the fire came floods. Right as Hurricane Ida struck Louisiana and then Mississippi. 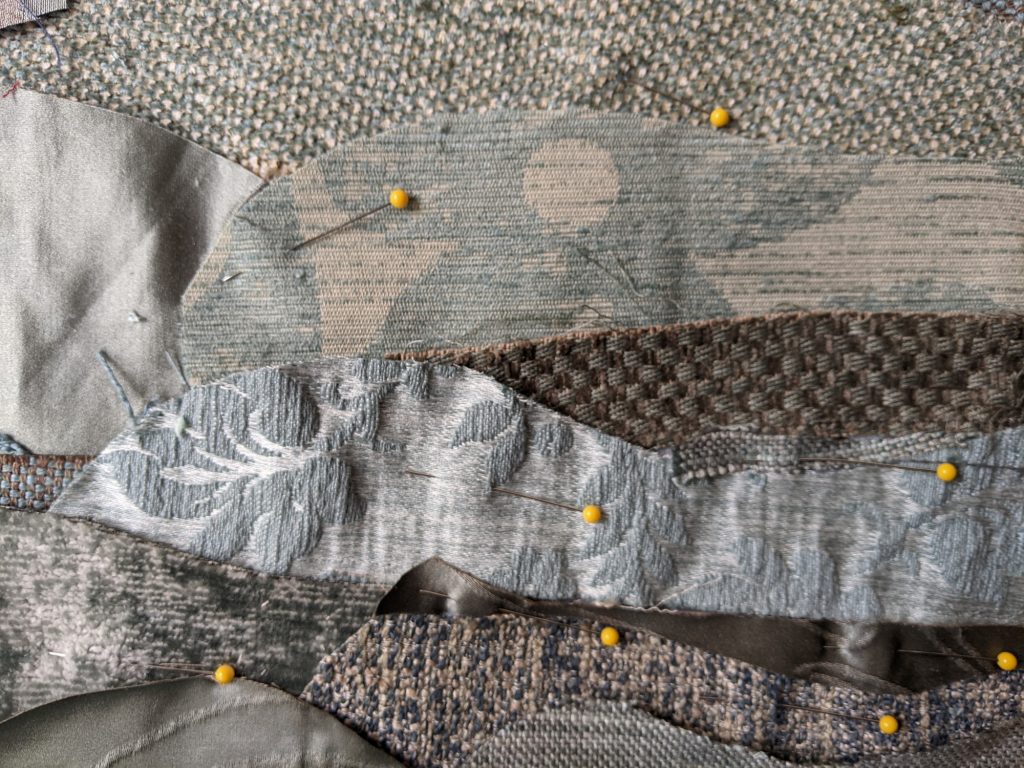 My heart ached for all the people in the path of the disaster. I was thinking of them when picking and cutting grayish-blue fabric scraps.

Then came the cracked earth brought about by droughts. Like the megadrought that the entire Western USA is suffering from at the moment. This turned out to be the most problematic part of all. I knew what it had to look like, but wasn’t quite sure how to create it. I looked at pictures of cracked earth, and even printed one and copied it onto transparent paper. 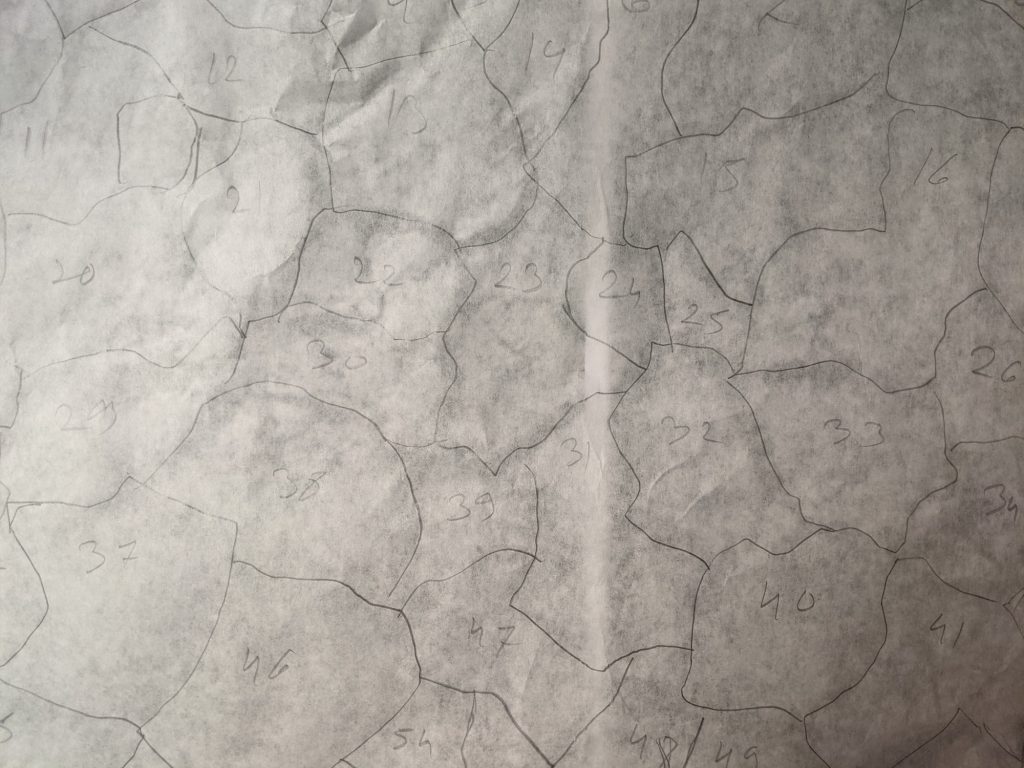 At first I thought of cutting separate pieces for each puzzle piece. But there were more than fifty of those, and I didn’t think it’ll look good. So I  contemplated cutting out strips instead. But the more I thought of it the less appealing this seemed. Eventually, I decided to keep the background collage minimal, and let the outline of the cracks take the main stage.

I used some yarn I had at home, and couched it along the crack lines. 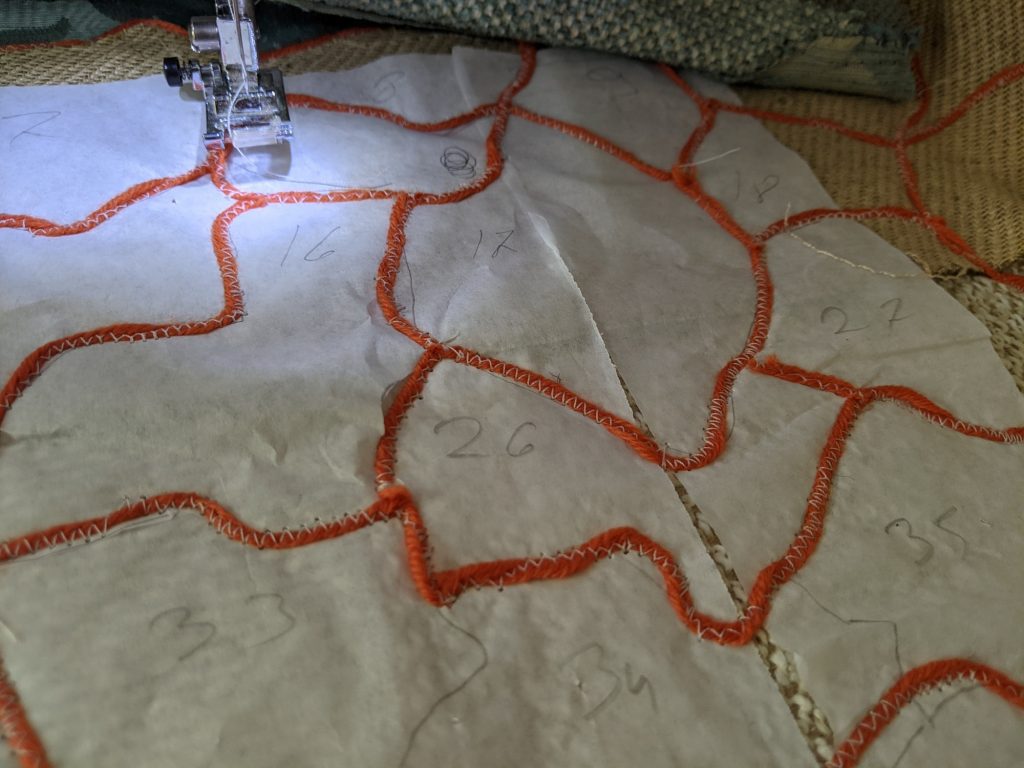 When I was finished, I carefully peeled the paper away, and was left with the exact image I was hoping for. 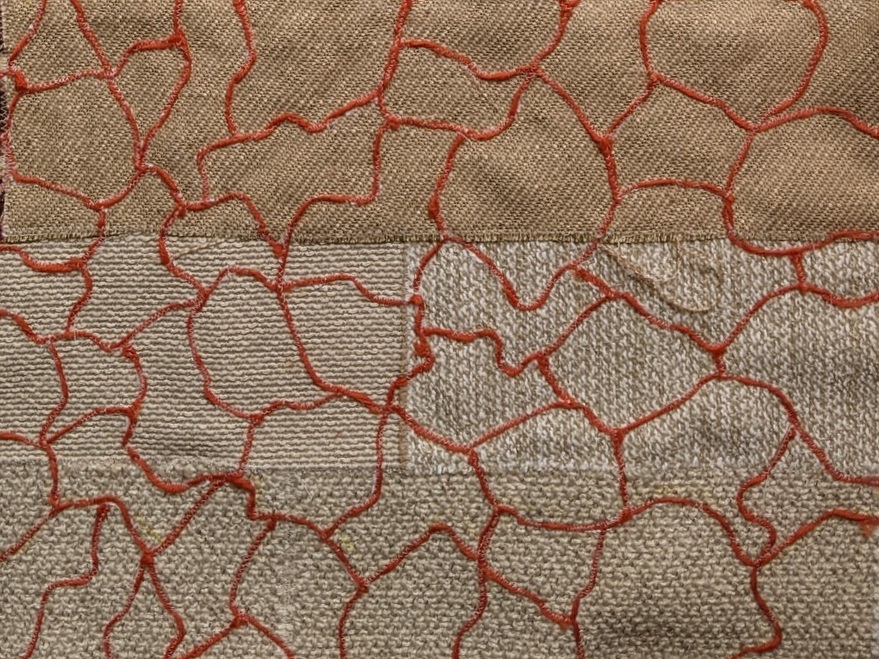 There it was, the future, filled with fires, floods and droughts, which happen to correspond to three of the four Classical Elements: fire, water and earth, the building blocks of everything, now turned into forces of destruction… 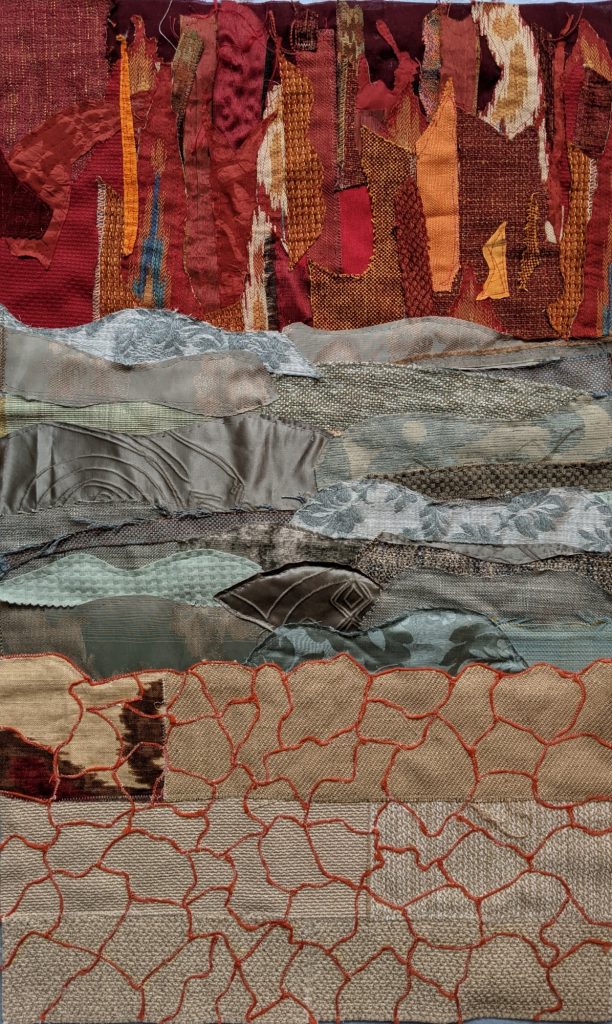 And yet, the quilt wasn’t finished. Something was missing…

Right as the smoke engulfed us in August, another earthquake destroyed Haiti. But living in California, earthquakes are never far from my mind…

Adding earthquakes required cutting the quilt, something I felt quite nervous about. After all, I have already spent many days working on it, and the potential for disaster (ha!) was great. Eventually I gathered the courage, and put rotary cutter to quilt top. 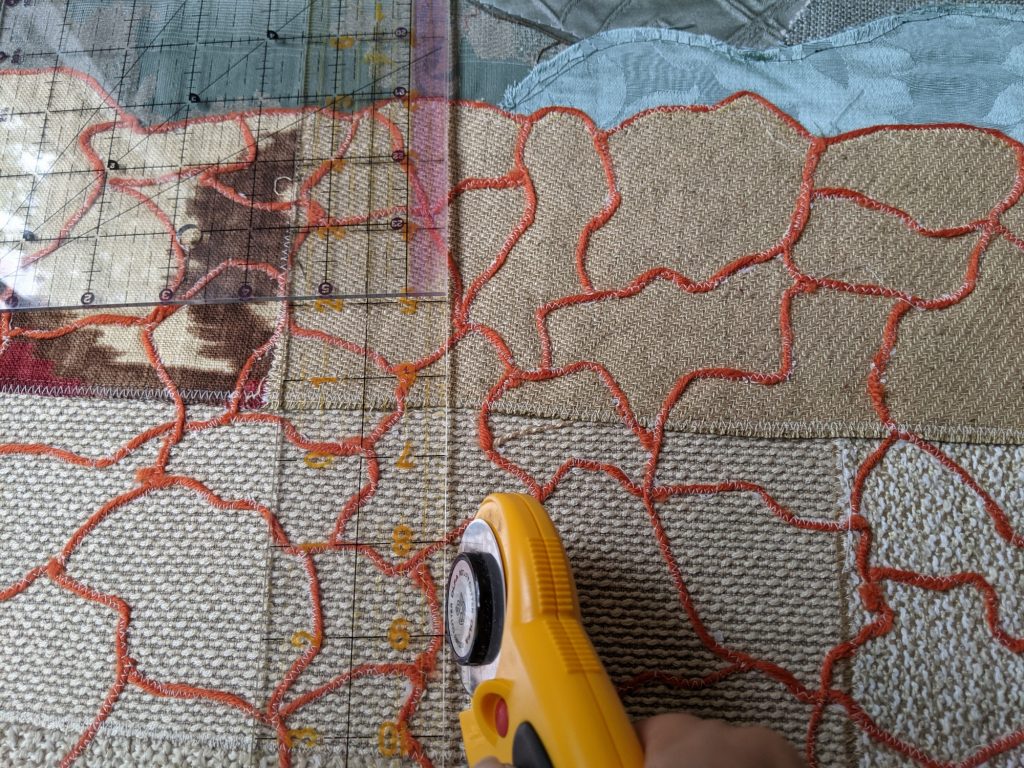 I created a fault line.

I attached the pieced top to the batting and backing, and sewed them all together. There it was: Behold the Future! 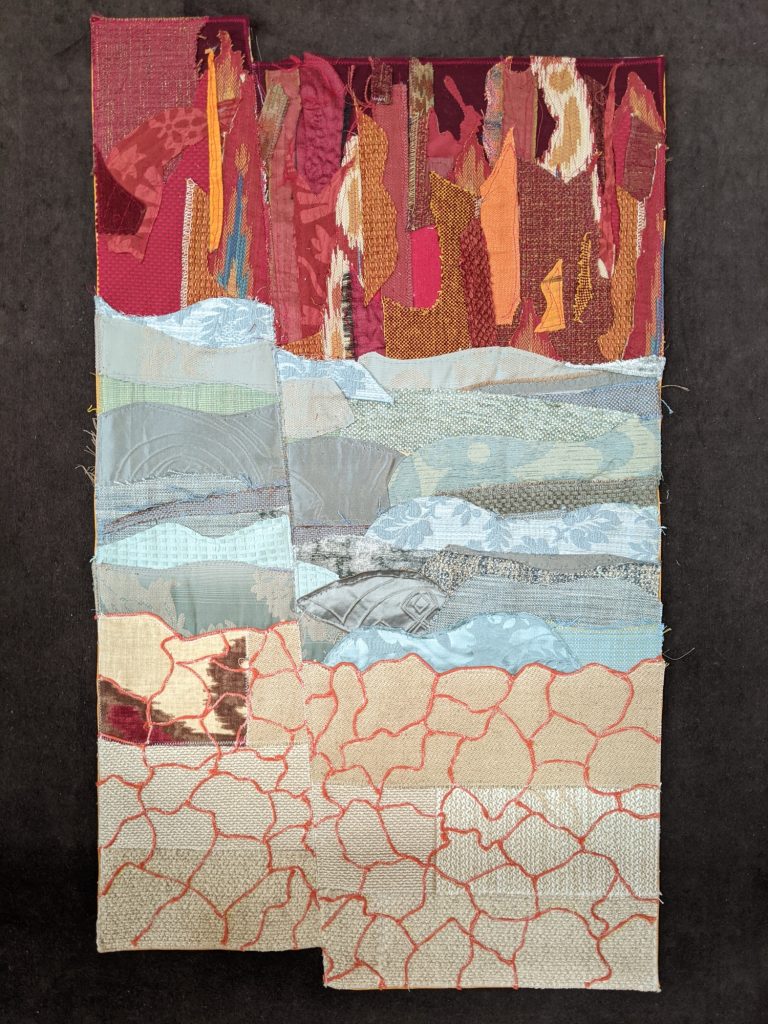 I enjoyed picking thread to quilt it with. 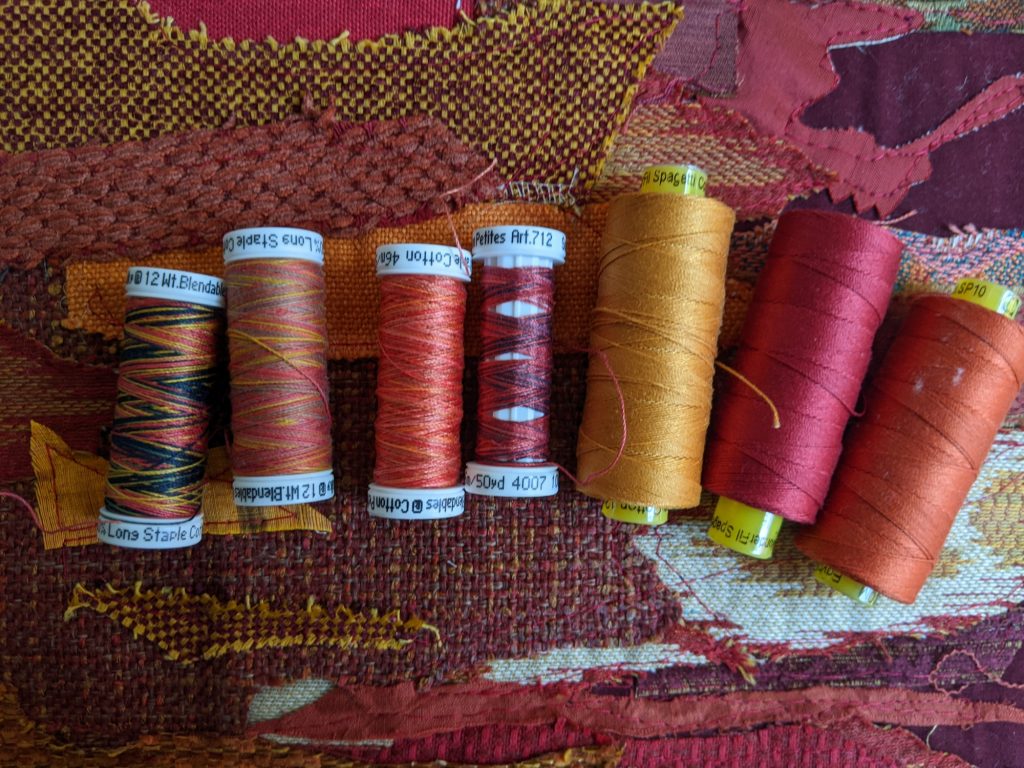 Many hours of quilting followed. Sadly, this part did not go smoothly. My thread kept breaking, repeatedly. At first I thought it was the brand of 12wt thread I was using, but it didn’t make a difference when I switched to another brand. I changed the needle, to no effect. Cleaned the machine, and cleaned it again. Nothing. I played with the sewing speed and with the thread tension. No difference. I had no problem with my regular, 50wt polyester thread, that seemed to do just fine, however… Eventually, after hours of frustration, I came to the conclusion that it wasn’t the thread’s fault. Perhaps cotton was too weak for all my layers, or perhaps my domestic sewing machine just wasn’t made for this. There were many layers in parts of the quilt, of thick upholstery fabric (not to mention interfacing, batting and backing). An industrial machine might have dealt with this better, but I don’t have one. So I gave up, and finished quilting with thin, polyester thread. 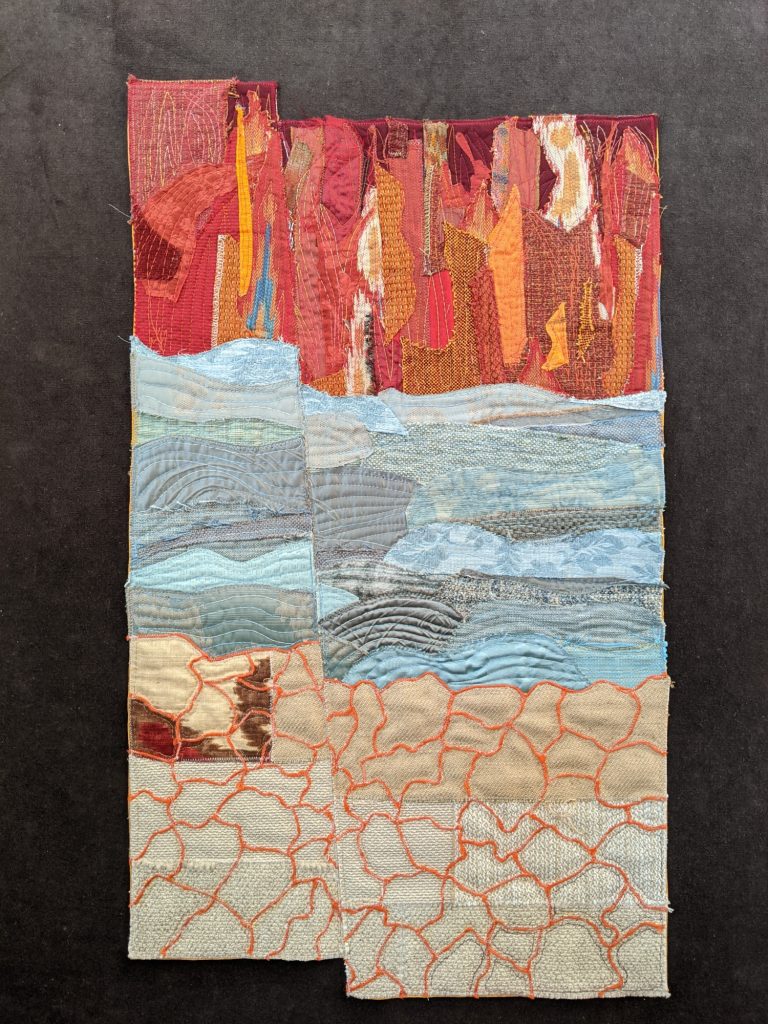 As a result, the quilting made less difference than I was hoping for, but it still added interest, I think. Behold the Future! was finished.

If you’re like me, curious to know what the back looks like, here’s a peek (before I added the hanging sleeve): 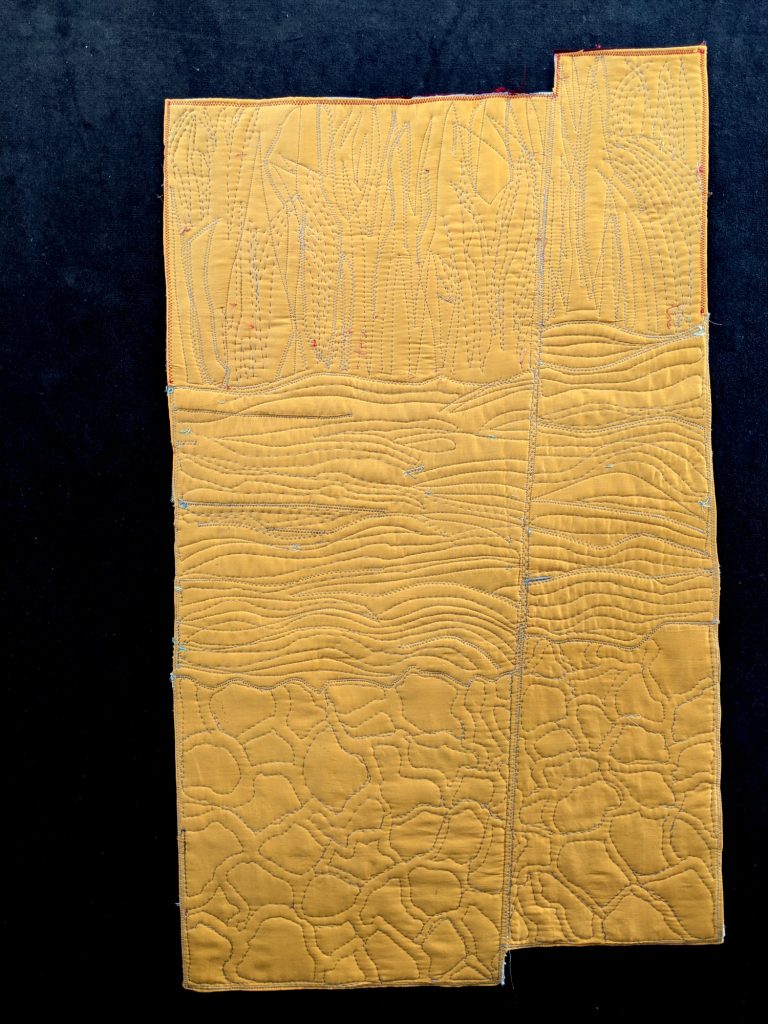 I was beyond delighted when Behold the Future! was accepted into the Pacific International Quilt Festival where it was on display on Oct. 14-17, 2021.

12 thoughts on “Behold the Future! An Art Quilt”