One of the silver linings of the pandemic was the expansion of the virtual world. Although most of us found ourselves physically confined, we were still able to send our minds roaming with a click of the mouse.  The pandemic forced many institutions, companies and individuals to rely more heavily on the internet. As a result, the world shrunk a little more, putting a large number of resources at our fingertips. We could now bring more of the outside world into our homes.

And thus, over the last several months I enjoyed online art exhibitions, artist talks, webinars, lectures and also classes. I especially enjoyed taking classes with artists from different parts of the world, something I couldn’t do pre-pandemic.

Back in March, I took one such class with British mixed media artist Tansy Hargan. I’ve been following Hargan’s work online for several years. When she offered an online course for the first time ever, I hopped on the opportunity. As I was going through the course, experimenting with mixed media art, I realized that I am learning not only about how other artists approach their work, but also a lot about myself and my own preferences.

Like me, Hargan derives much of her inspiration from her surroundings, especially from nature. But whereas I rely on general impressions in my head, she makes meticulous sketches, both on site and later in her studio. Bringing myself to go out and sketch was difficult. I found myself resisting the idea, though I’m not quite sure why. It’s been decades since I last drew, and trying it again was hard. I procrastinate quite a bit before I was finally able to force myself to sketch, and then didn’t quite enjoy it once I did. In the end, I decided to continue relying on the pictures in my mind instead of on sketches. The latter just don’t really work for me…

I’ve been using upcycled fabrics in all my work since the very beginning. Mostly home décor textiles, but also some repurposed clothing. When upcycling clothes, I’ve been unpicking some seams, but largely cut away the easily-accessible parts, leaving the more problematic areas untouched. This, for example, is what was left of a couple of my son’s old pants when I finished “harvesting” them for one of my projects. 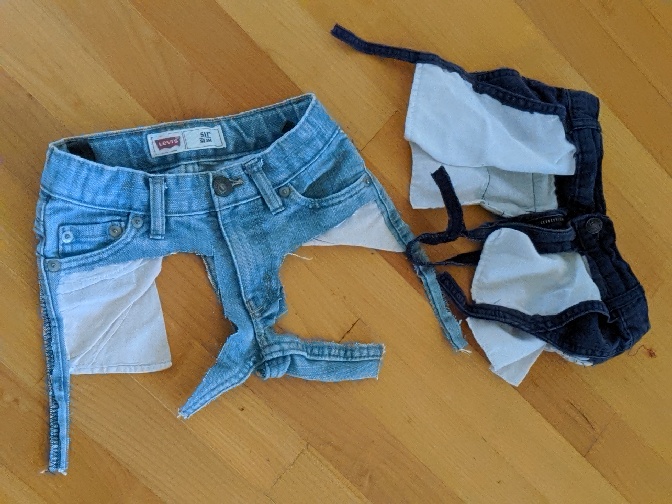 Hargan, however, strongly encouraged unpicking everything, and for the purpose of the course I followed her advice. I chose to unpick a pair of torn cotton pants that my son outgrew a few years ago.

The pair of pants I chose to unpick was an inexpensive pair I probably bought on sale for less than $10. I guess it would qualify as fast fashion. As I was unpicking it, however, I increasingly filled with awe and admiration for the anonymous hands that put it together. It took me an entire day to unpick this cheap, kid-size 7 pair of pants! 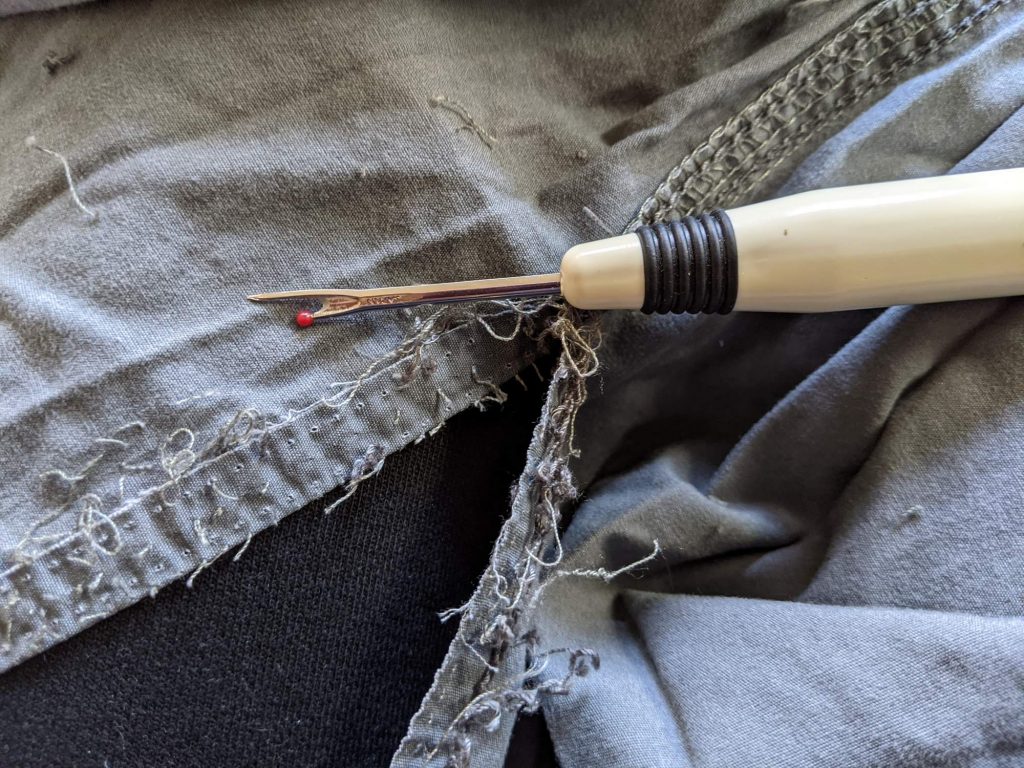 The seams were really strong (they held up to my active son’s abuse, even when the fabric itself didn’t). Some of the seams were triple (!!) sewn. 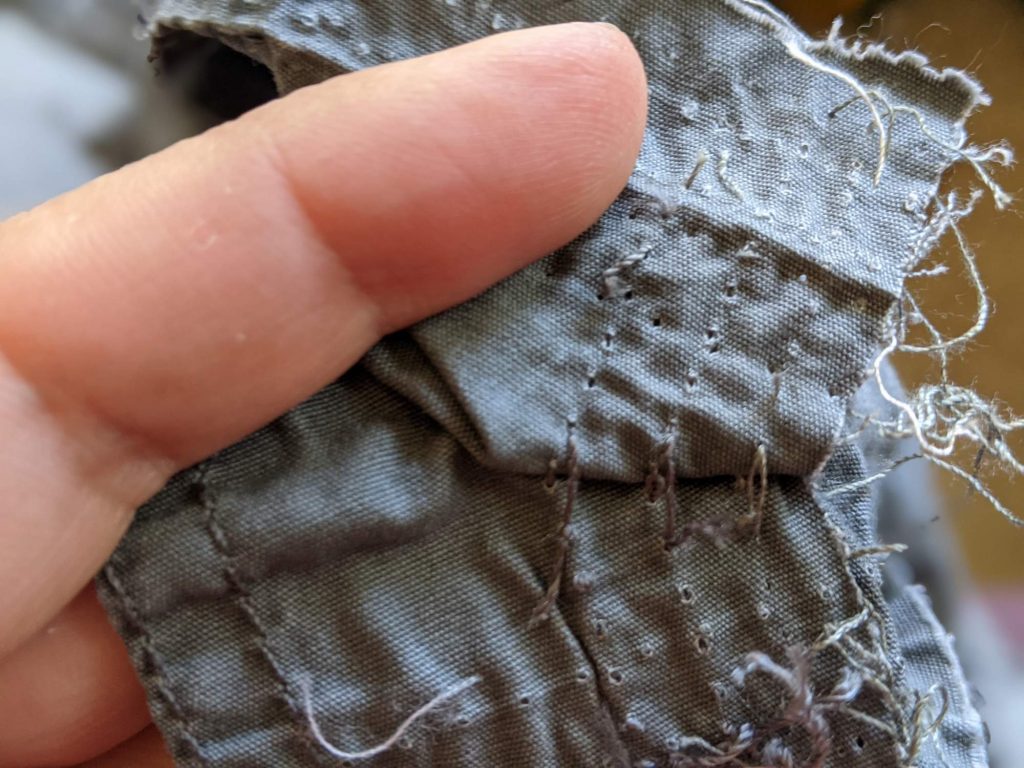 And there were so many different pieces that went into it! 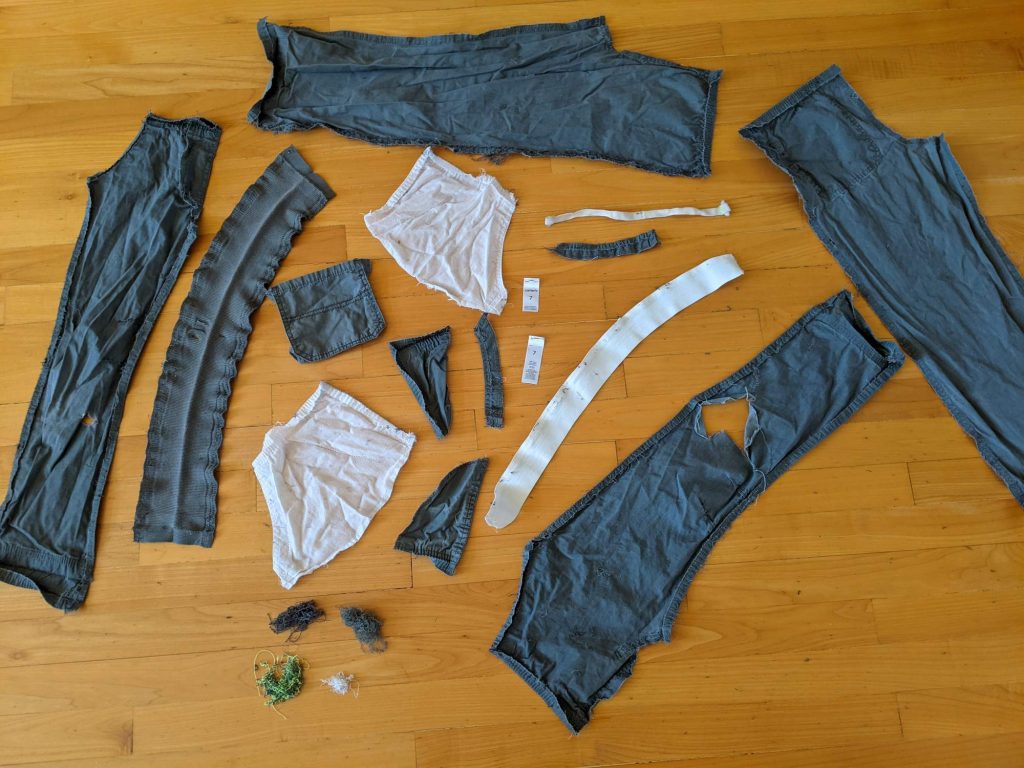 Not to mention four kinds of thread… 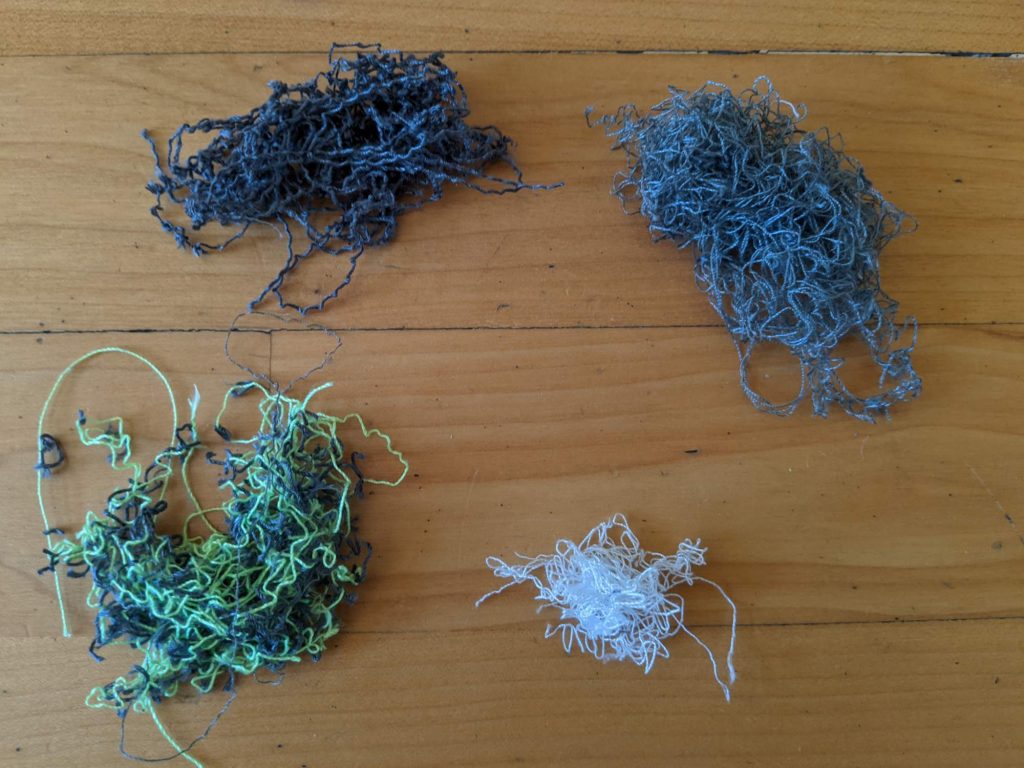 I found it mind boggling that such a well-made pair of pants could cost so little. There is something seriously wrong with the fashion industry, that so devalues the work of some people for the enjoyment of others…

So far in my work I used existing fabric, which already had colors and patterns. Finding good use for beautiful, unwanted fabric was a big part of what motivated me. For this course, however, I needed to paint my own fabric with acrylic paints, and then play with surface design. This was a completely new territory for me. Like sketching, it had been decades since I last painted. Once again, I found myself procrastinating for days before I could force myself to do it.

Here’s what I learned:

I settled on a spring color palette inspired by my garden. 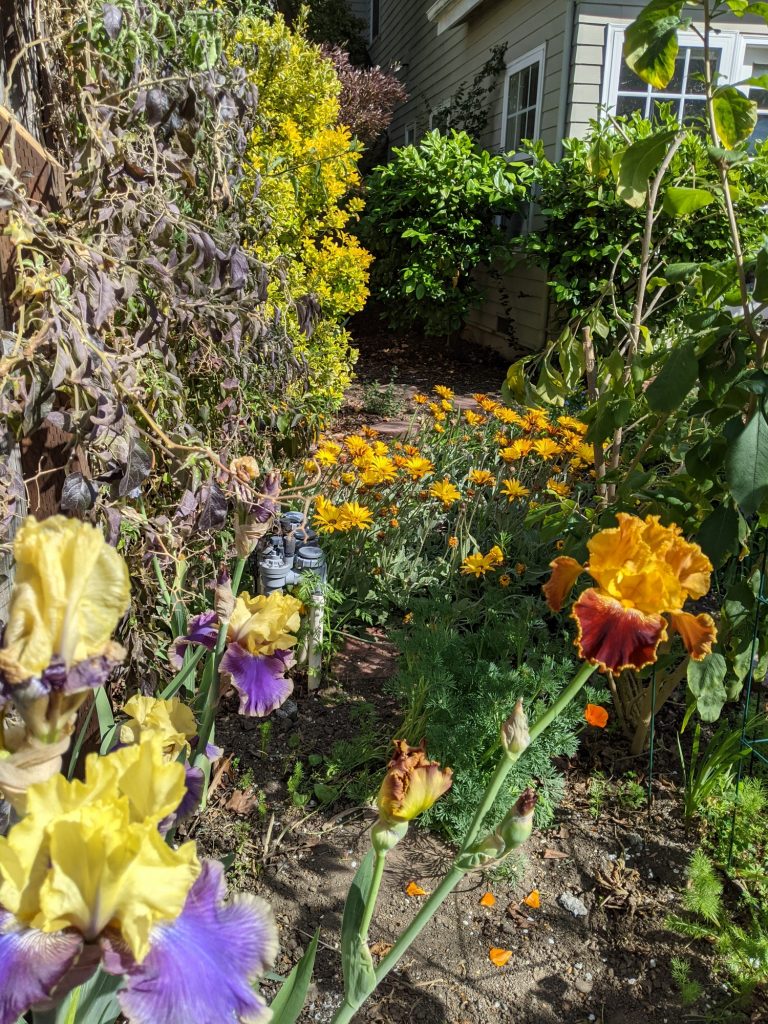 At first I tried painting in the garden. That was kind of nice until the wind picked up and started blowing my pieces away. 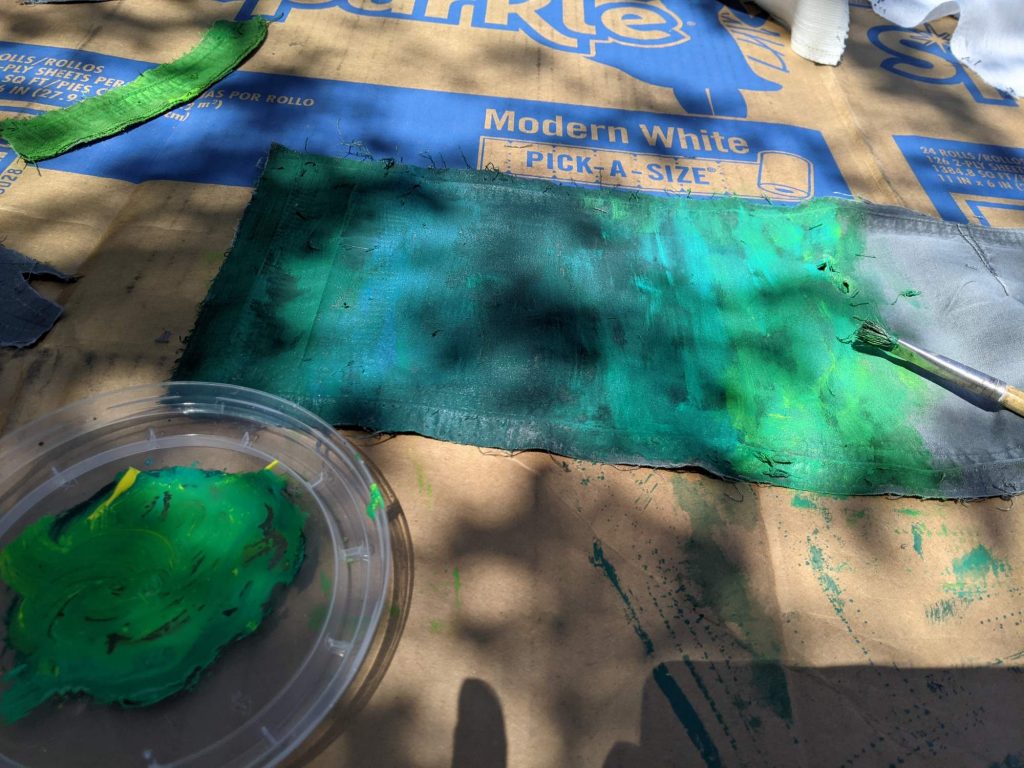 So I moved into the garage instead.

I soon discovered some of the advantages of paining your own fabric. 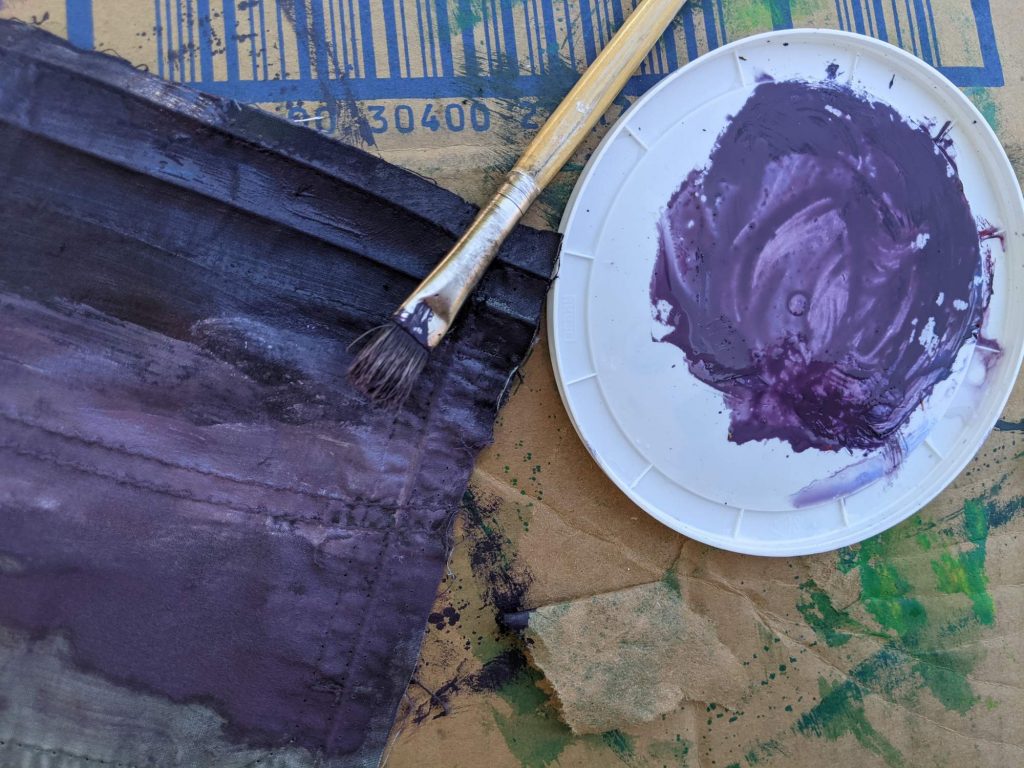 2. I absolutely love the look of painted cloth, the unevenness of it. 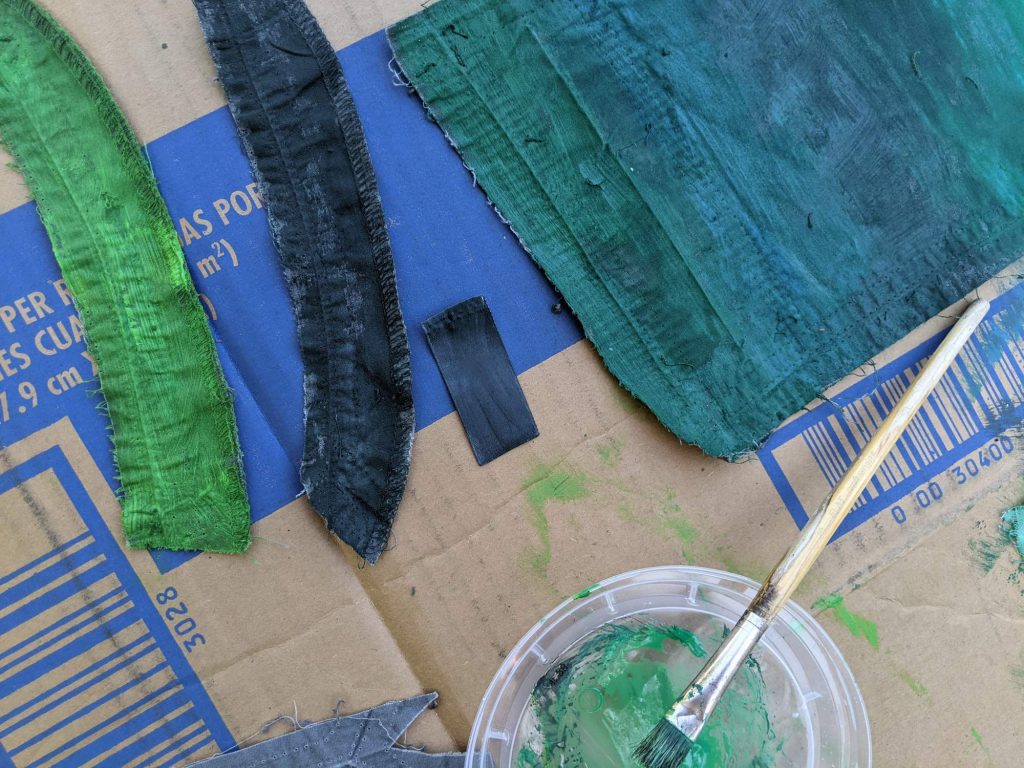 And I discovered that I also enjoy playing with surface design, and the endless possibilities it offers! 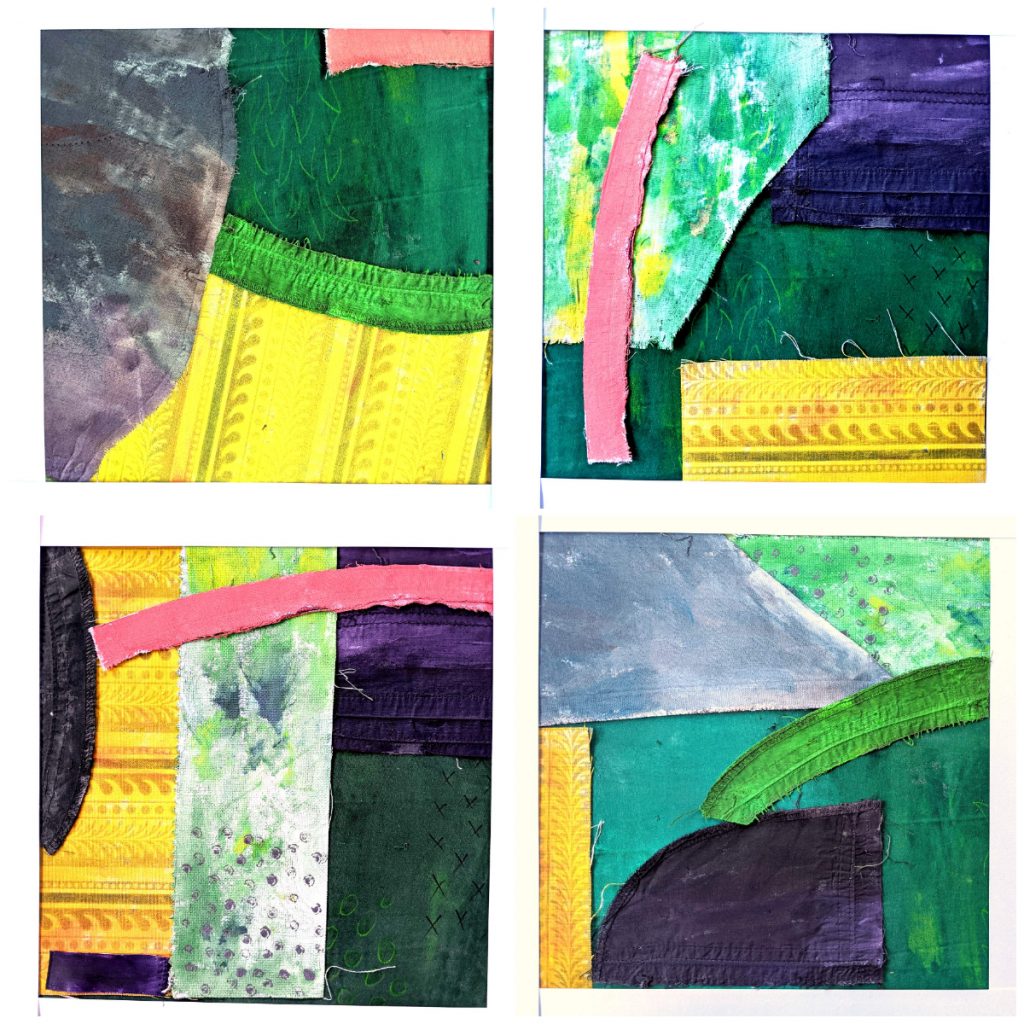 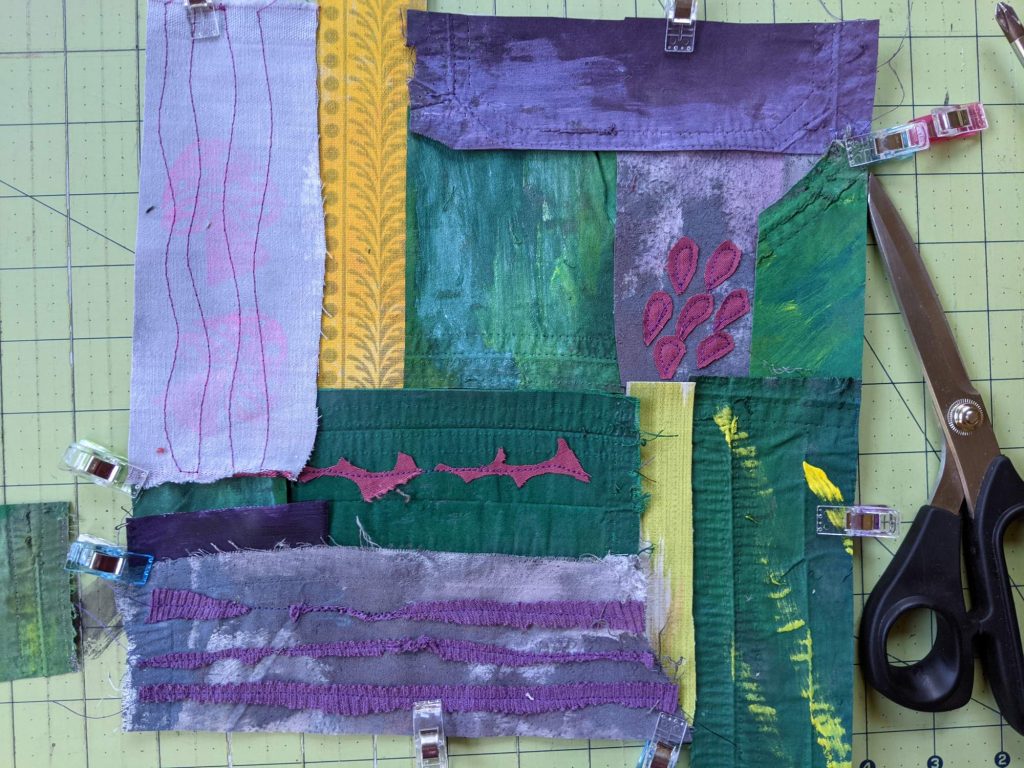 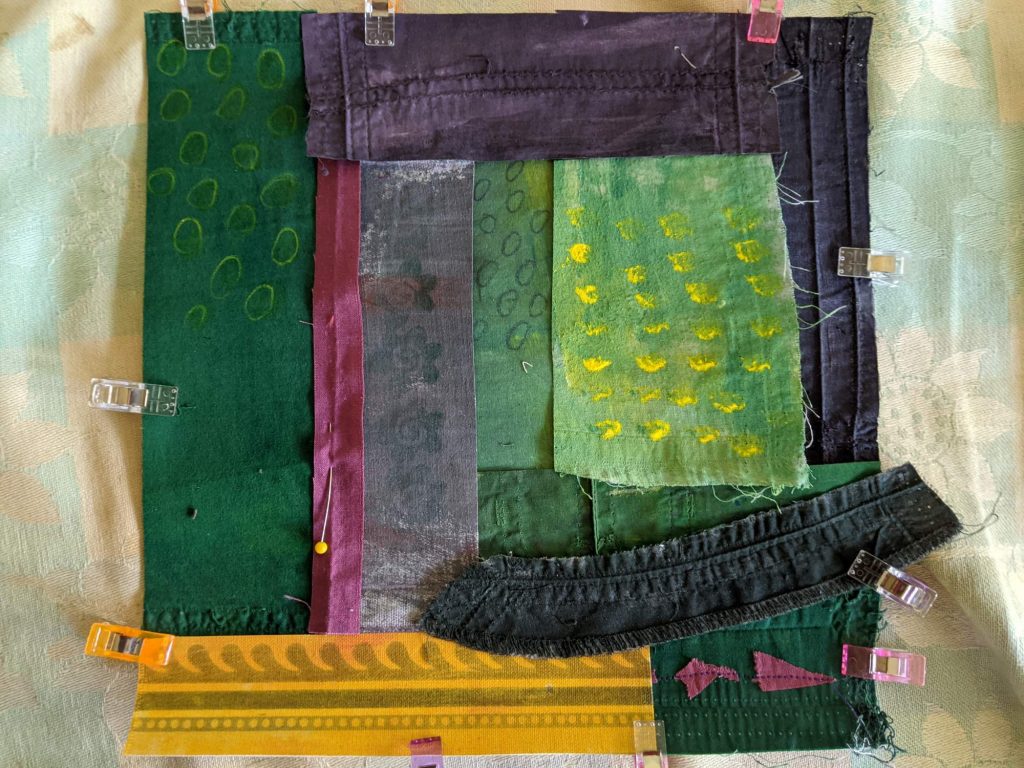 What I don’t like is the way painted fabric feels. Fabric covered with acrylic has the texture of paper. Although it looks great, it looses its fabricness. I love working with textiles because they are soft, and because they have a soothing warmness to them. Painted fabrics don’t. They are stiff and rough. They sew like paper, too, and are very difficult to hand stitch through.

I ended up making eight mixed media art pieces for this course, each 10″ square. I’m quite happy with how they turned out: 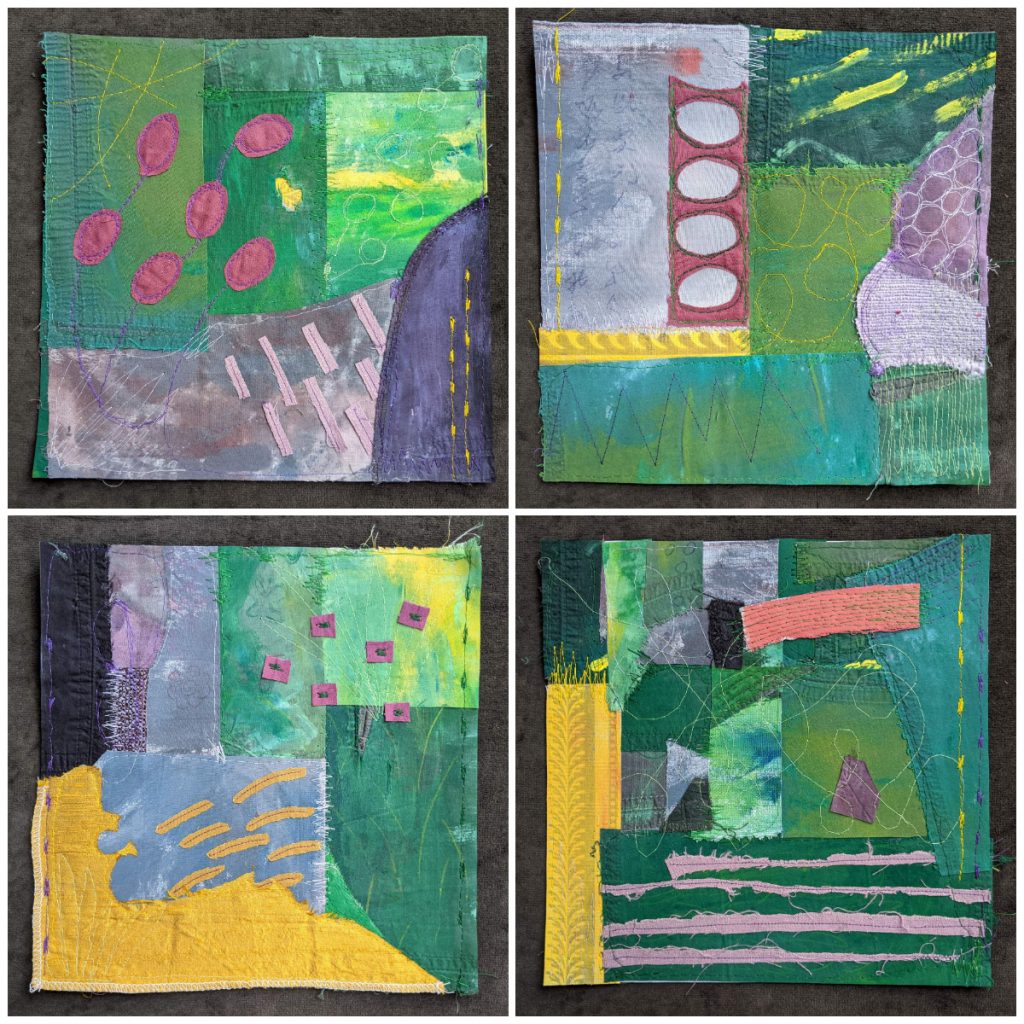 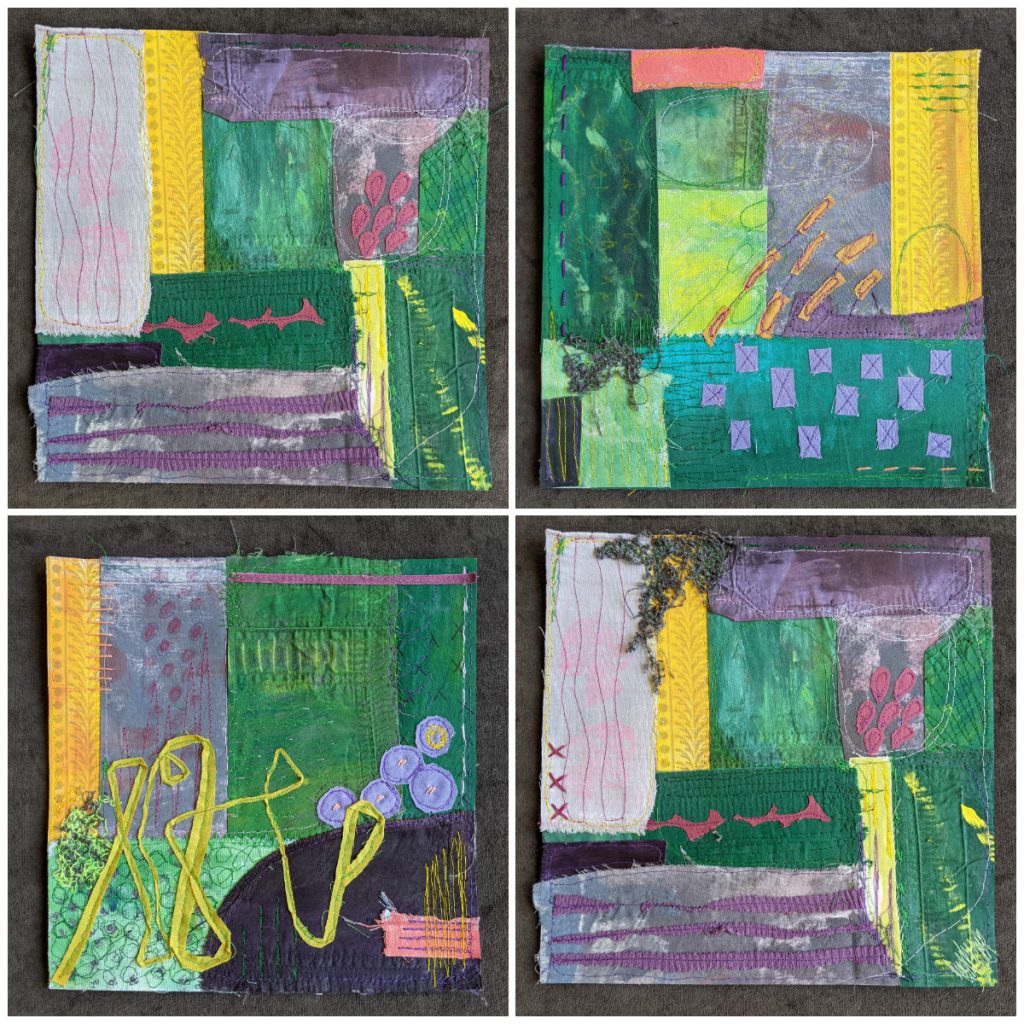 Following the course was a challenge, as it pushed me in ways other courses didn’t. It wasn’t the same as learning new quilting techniques, for example. I’m now open to new directions, new, exciting possibilities! I’ve already used some painted fabric in my Languishing series, and have ideas for new ways in which I’d like to incorporate mixed media art into my practice. Going forward, I need to think of how to combine some of the things I like about mixed media art with the things I like about using fabric.

Have you tried something new during the pandemic? I’d love to hear about it!