2020 is such a round, even, symmetric number. A pretty number, even. After a difficult 2019, in which I lost my father, I was very much looking forward to that beautifully-numbered year. 2020 promised a new, better decade, a fresh beginning, a rosy promise…

Well, as you all know, it didn’t quite deliver…

2020 turned out to be unlike any other year. It brought one calamity after another, in unrelenting waves, from all directions. A worldwide pandemic. Numerous natural disasters everywhere. Daily news depicting one outrage after another in devastating speed. Blow after blow after blow. And then there were personal catastrophes, too. Really bad things happened to really good people that I deeply care about. It just didn’t end.

Some mornings I wake up afraid to open my eyes, afraid of what the day might bring. There are entire days in which I walk around with a lump in my stomach, hardly able to breath. Sometimes I find it hard to function at all. I’m not depressed. It’s just that this year has been really trying. The world seems to have gone awry, and the light at the end of the tunnel feels far away and dim. It’s been overwhelming.

Somehow, out of all of this, a new quilt idea was born.

I had this vision in my head: A narrow grotto with overhanging boulders, threateningly squeezing a small human figure. I could see the scene in my mind, but it took a while to decide how to translate it into fabric.

One day I asked my daughter to take a picture of me in a fetal position, depicting how I felt. I wanted to use the picture as a study, a model for the human shape I wanted to embroider. She took several pictures, and I chose one and printed it on paper. I cut it out and started planning the composition. 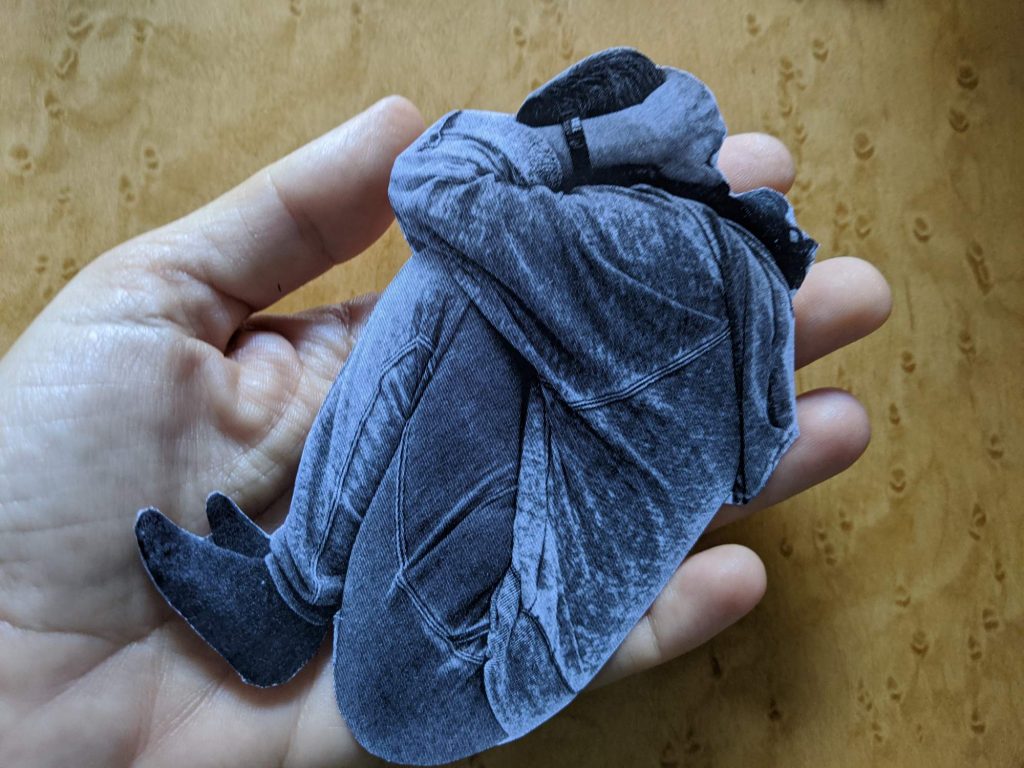 Although I was in the midst of working on another series, a series that is marked by bright, cheery colors, I chose to select dark grays for this quilt. 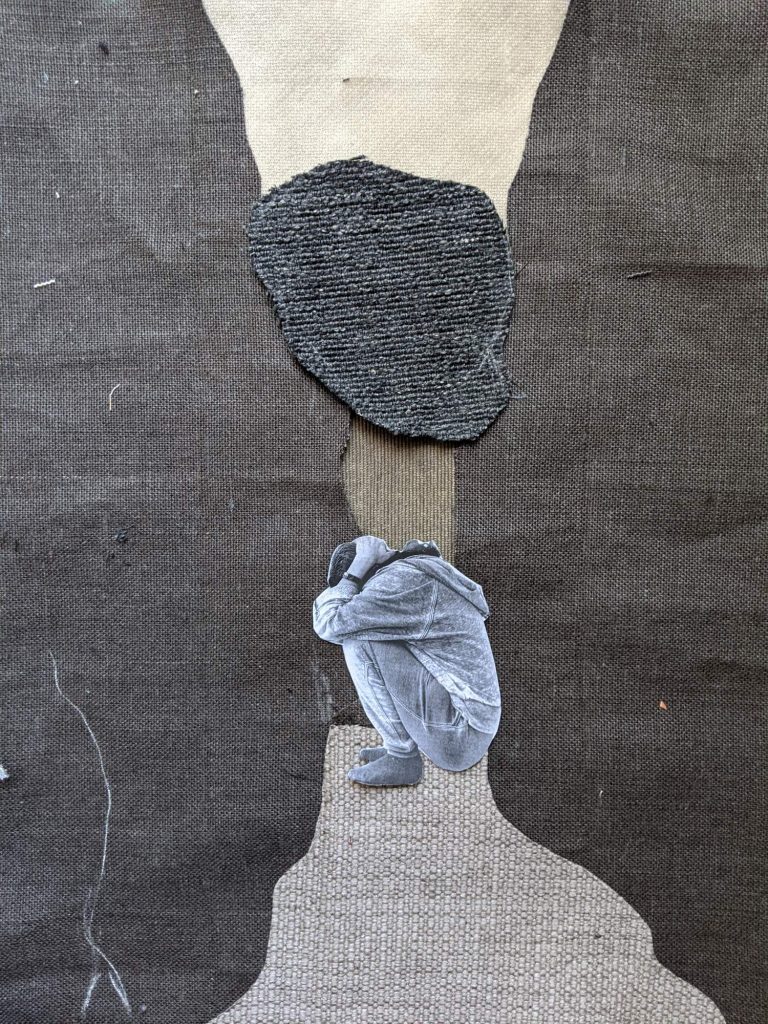 A Self Portrait to Represent Us All

The human shape, at this point, was still paper, and I wracked my brain trying to decide what to do with it.

Although I originally meant to use my picture only as a study, the more I progressed with the quilt the more I wanted to leave it the way it was. This wasn’t any human form, it was me. A self portrait of sorts in which I am seen on the outside, but am entirely unrecognizable. The quilt itself, or course, is more “me” than my picture, because it depicts how I feel on the inside… This self portrait wasn’t just a self portrait, however, because this year many of us feel the same. This meant that I could represent all humans.

My daughter took the picture on a regular, Covid-Lockdown day, just like any of the other two-hundred-and-something lockdown days we’ve had so far. I was wearing my Day Pajamas: comfortable, broken-in, unsightly sweats. The outfit, I decided, represented the times we live in and was therefore just right.

Not quite abstract but not realistic, either, this quilt pushed me to try some new techniques.

I printed the picture of me on fabric, something I’ve never tried before. It turned out washed out and ghostly. I thought that that, too, was appropriate…

For the first time ever, I added details in acrylic paint. 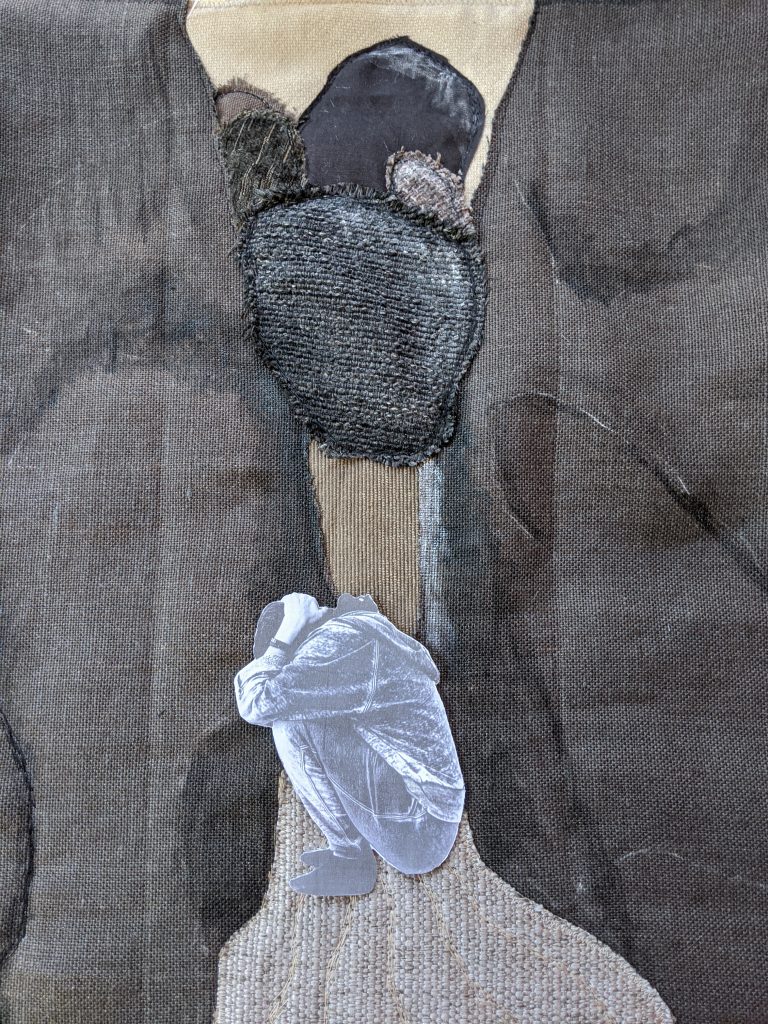 I glued and then sewed the human form into its position. It looked out of place, not really belonging to the world around it. Exactly the way I feel about my world right now, which morphed under my nose into something unrecognizable.

I stressed some of the rock details with crude thread painting. 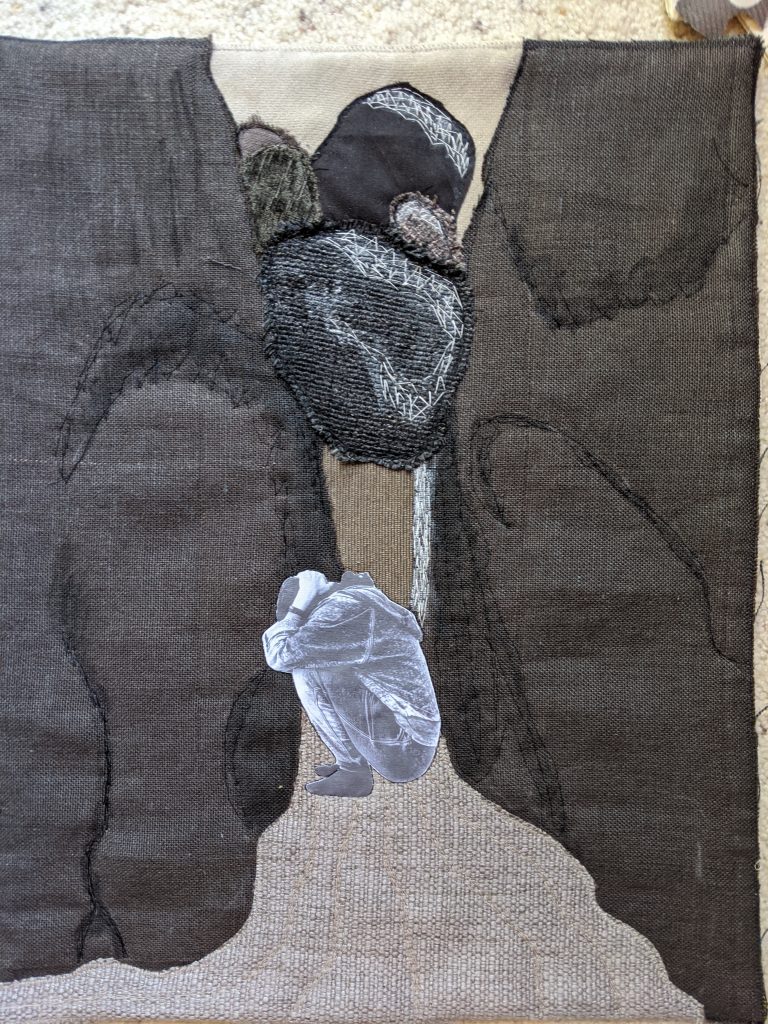 I didn’t like the white highlights on the boulders, however, and later spent quite some time pulling them out.

The composition was just as I intended, and yet the quilt still didn’t depict the internal and external turmoil I wanted to convey. So I took a picture of the quilt as it was, printed it, and drew different quilting options over it. Once I knew what I wanted, I free-motion quilted big squiggles on the cliffs of both sides, in big, crude stitches (because I didn’t have heavy-weight thread in the color I needed, and the fabric would have “swallowed” small stitched in the thin thread that I did have). That was more like it. In the process, I broke TWO machine needles. I often go months on end without breaking a needle, and have never before broken two needles in one sitting. Somehow, though, with a quilt called “2020,” I wasn’t really surprised…

Finally, I added a touch of red shadow, and my ANY Texture logo in a Chinese, chop-signature way.

I left the edges fraying because, really, which of us isn’t fraying a little at the edges at the moment?

This is 2020 in all its repressive glory. 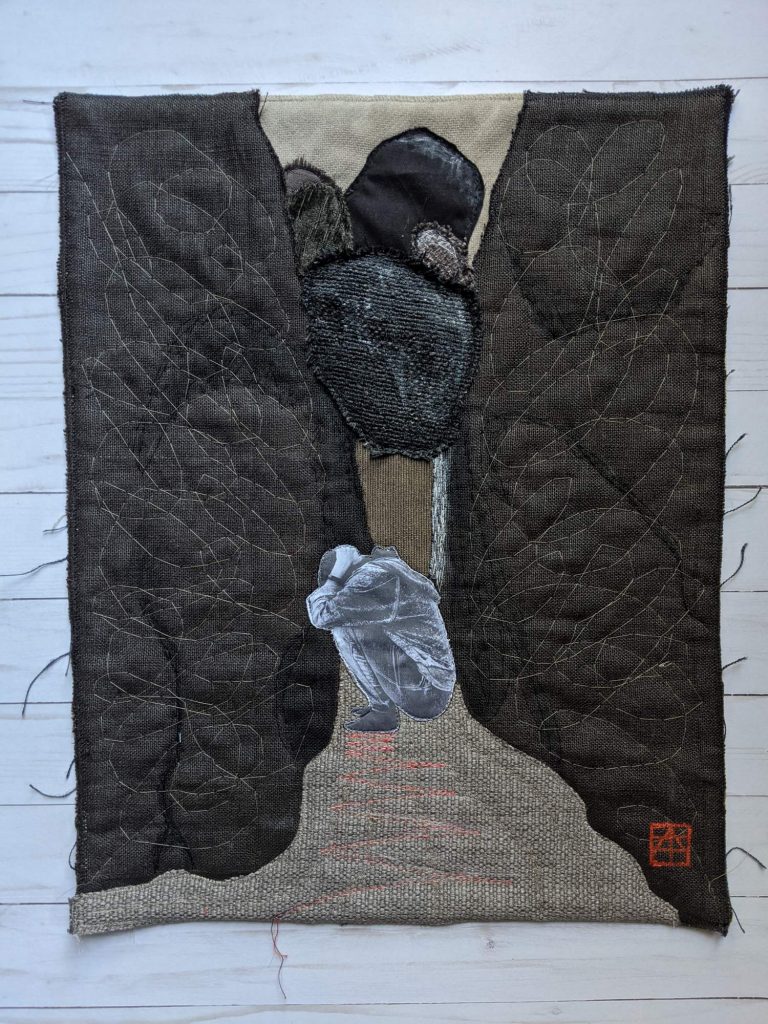 A suitable quilt to show four days before a crucial election, don’t you think? Can you tell I’m also suffering from a server election anxiety???

How to pass the next four days? Apply every self-care strategy in your arsenal, breath deeply, and hope that the election won’t drop another boulder over our heads…