Everything about this quilt took forever. It is the second instalment in my Hands Series, made almost four years after the first piece, Give a Hand. It took six months to make, start to finish, mostly because I left it untouched for long periods of time in between.

Give a Hand kept me distracted during the November 2016 election. The idea for Interdependent came to me during the first week of Lockdown, in mid March 2020. It slowly evolved from there, both in my head and in the real world. I guess the Hands Series growns in times of crisis…

Stage One: A Strange Kind of Euphoria

When the Covid 19 pandemic started spreading around the world at the beginning of the year, there was a lot of anxiety, but also some hope. People all over the globe went into quarantine together. It was the first time in history that the whole of humanity shared a common experience in this way.

Pictures of death and despair were intermingled with reports about shows of solidarity. Italy had some of the highest death tolls at the time, but the news also highlighted Italians singing on balconies. Videos from Hong Kong circulated on social media, showing sports and dance teachers giving lessons from rooftops. People shared pandemic-related jokes and memes on all communication channels, in all languages. There was a feeling of oneness, a perception that we were all in this together. Scientists from different countries collaborated to find cure and a vaccine. There was hope that human intelligence will overcome the virus quickly.

That was the original idea behind this quilt. This connectivity of all humans, regardless of skin tone, religion, or nationality. That is why I chose different shades of the same color. 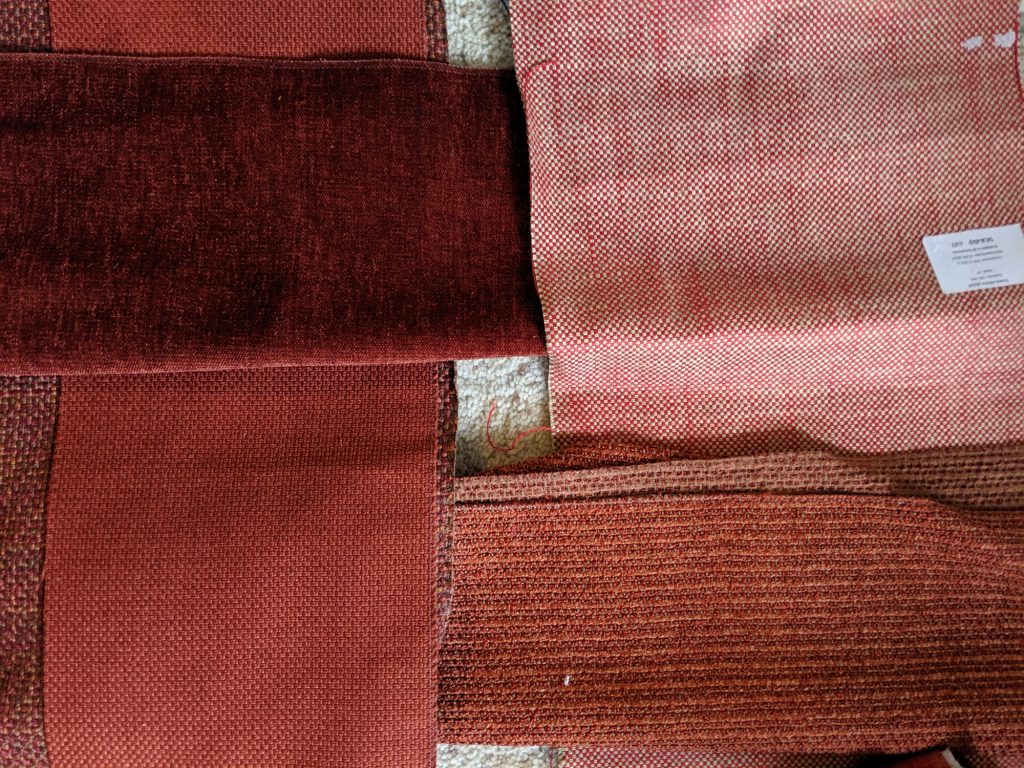 And why I thought to depict a circle of hands holding each other. 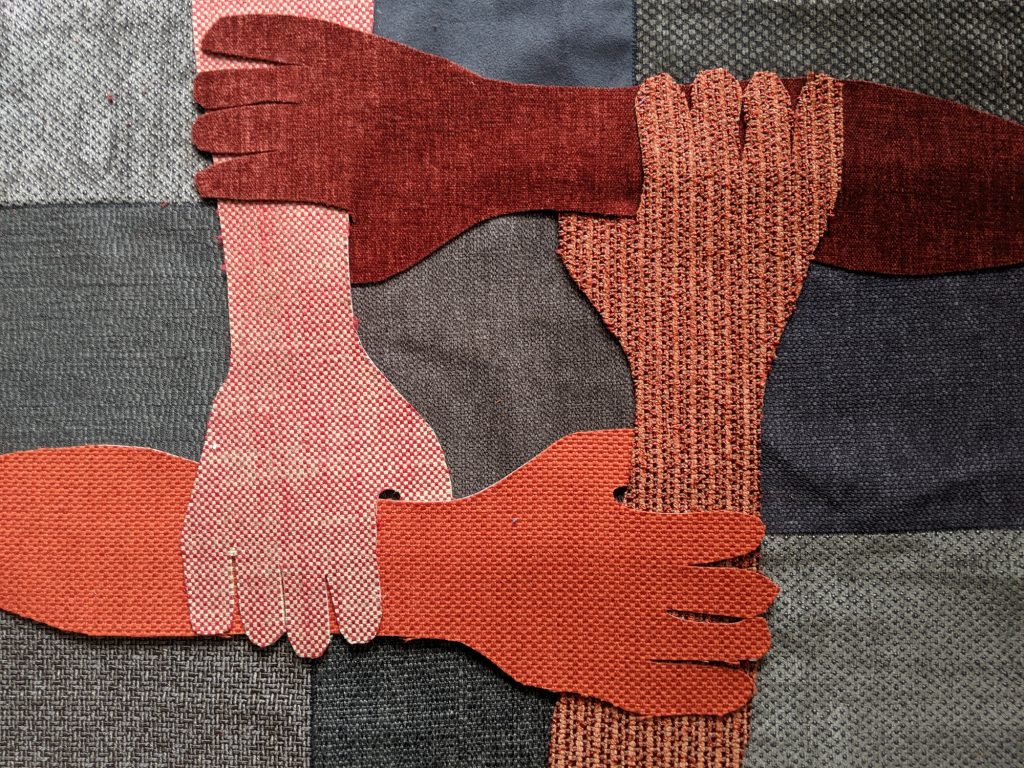 As the Lockdown dragged on, however, more sinister tones began creeping in. It slowly became clear that a vaccine will not materialize that fast, that this will take longer than anyone had expected. Rivalries between nations resurfaced. Racial tensions and inequality in the US came to the surface with a powerful, emotional Black Lives Matter movement. Economic inequalities between people and nations became more pronounced as economies strained. Political tensions grew all around.

Meanwhile, the Earth protested, too. Massive fires. Record-breaking heat waves. Melting glaciers. Floods. Locust. Powerful storms. The planet showed us who was in command. For centuries, humans took and took and destroyed, exhausting the natural resources of our habitat. Now, without leaving our homes, we acutely feel the result of our accumulative actions.

The quilt wasn’t about hope and solidarity anymore. It became more complicated, more malevolent. Dark, like the grays of its background. Yes, we are interconnected, but in intricate ways, both good and bad. Because in a super-connected world like the one we live in, with people moving about widely and quickly, viruses that emerge in one part of the earth spread worldwide within days. Polluted air or water originating on one side of the globe travel quickly, too. As do pests, species which then become invasive, ideas, protests, corruption. And now–wildfire smoke…

The things that threaten humanity became a part of the quilt. As did the self-inflicted threats. I started embroidering some of the major ones all around, on the outer borders of the quilt. First, in black and gray, the natural threats, including the ones influenced by human activity. Then, in red, some of the threats that are entirely self-inflicted, caused by human shortcomings, stupidity and limitations.

At that point, working on the quilt became emotionally difficult. Instead of being distracting and meditative, the embroidering process started taking me to bad places, to pull me down. 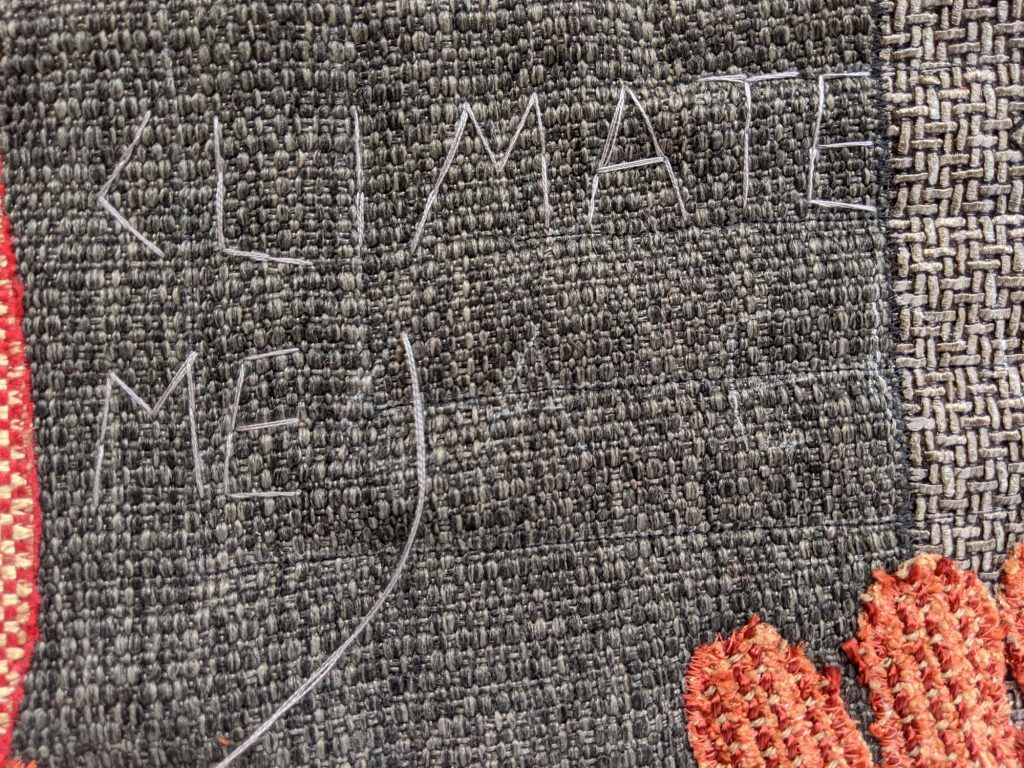 I couldn’t work on it for long periods of time. I had to take a lot of breaks. Then, when summer came, I took one very long break. 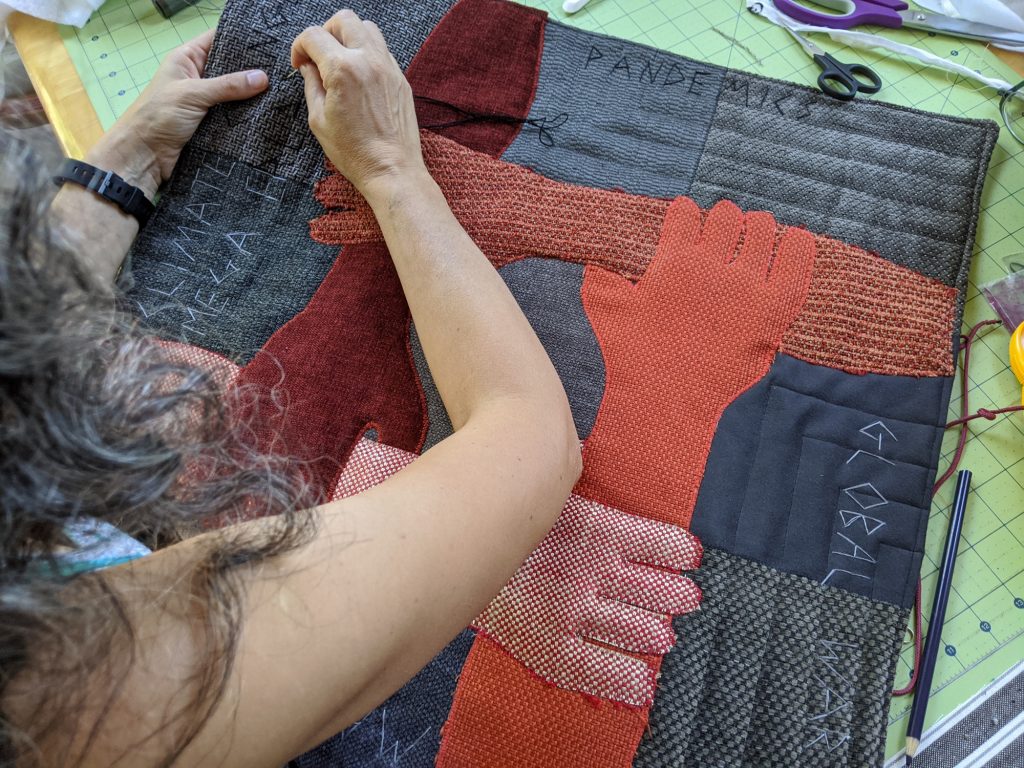 The massive wildfires that engulfed California in August brought me back indoors, into my sewing room and back to this quilt. I forced myself to finish it. I put in the last stitches under the strange, orange light of a smoke-filled air. 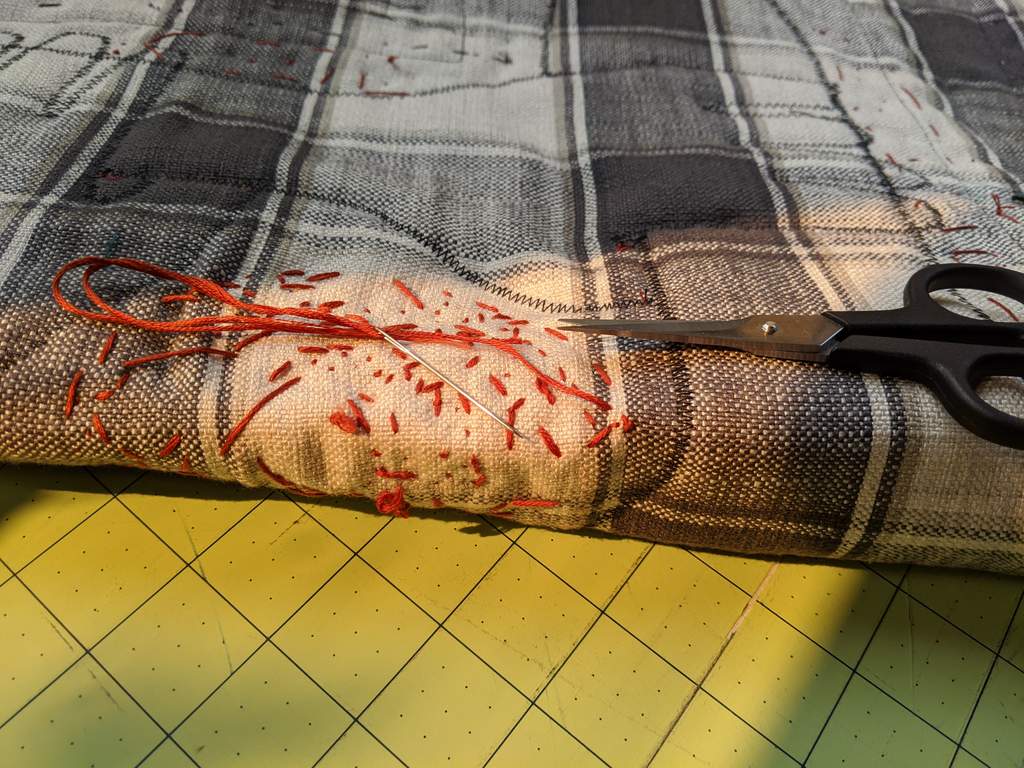 Stage Three: The Good and the Bad

Interdependent highlights the connections between all humans, connections made stronger by the things that threaten our existence: 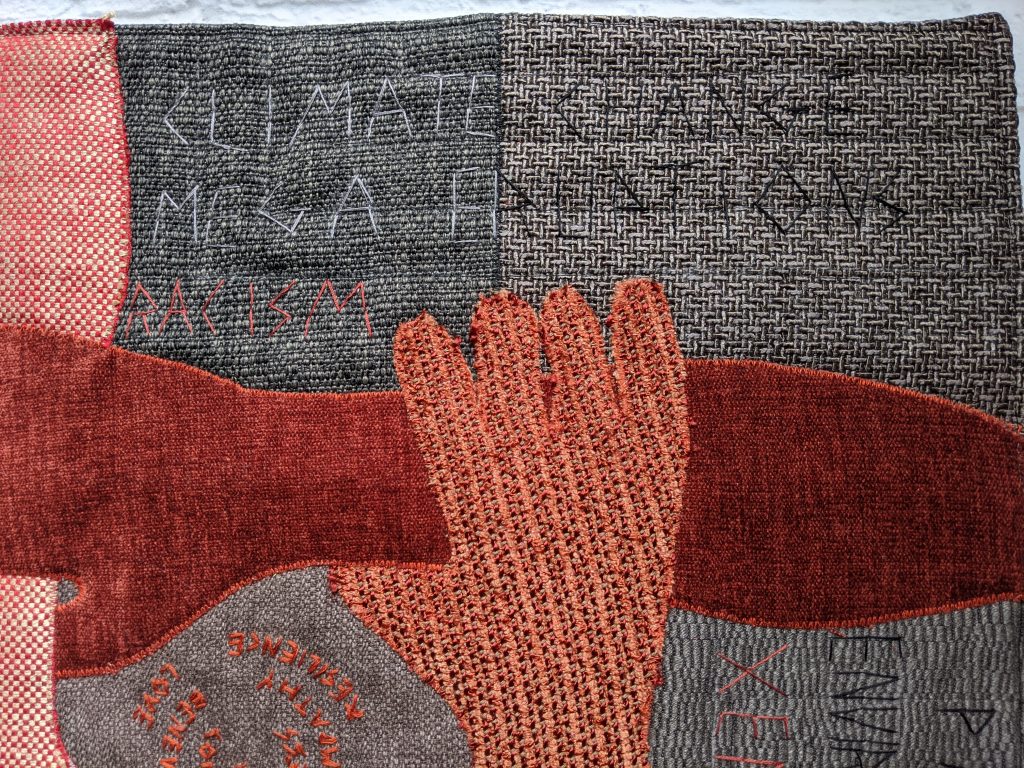 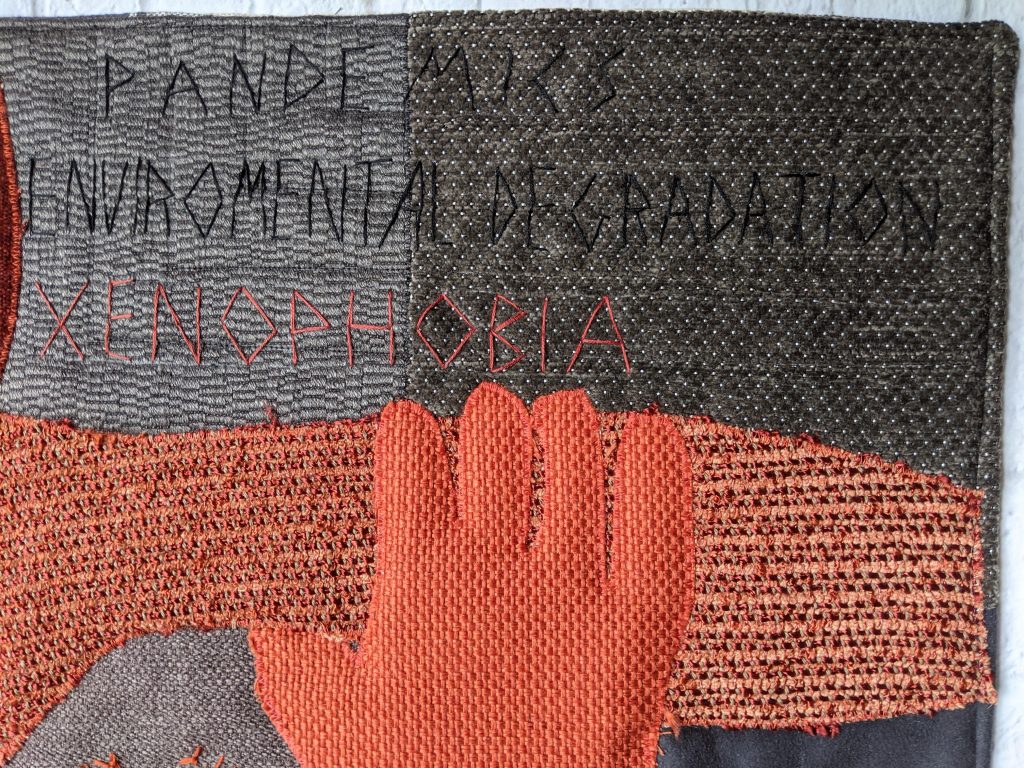 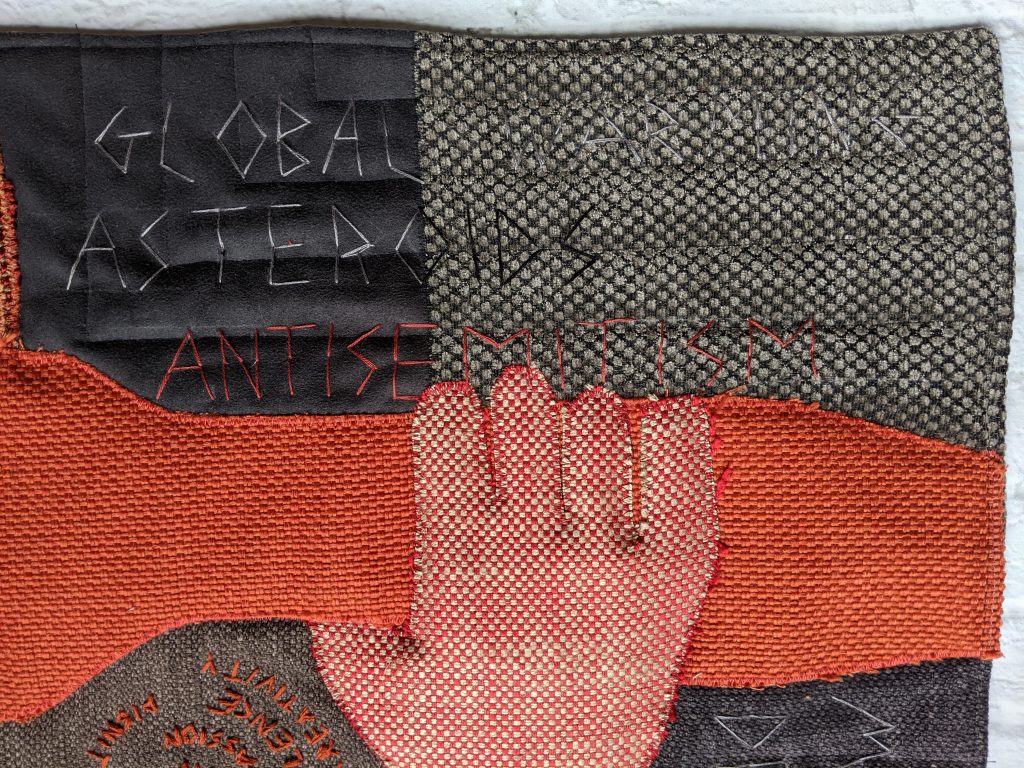 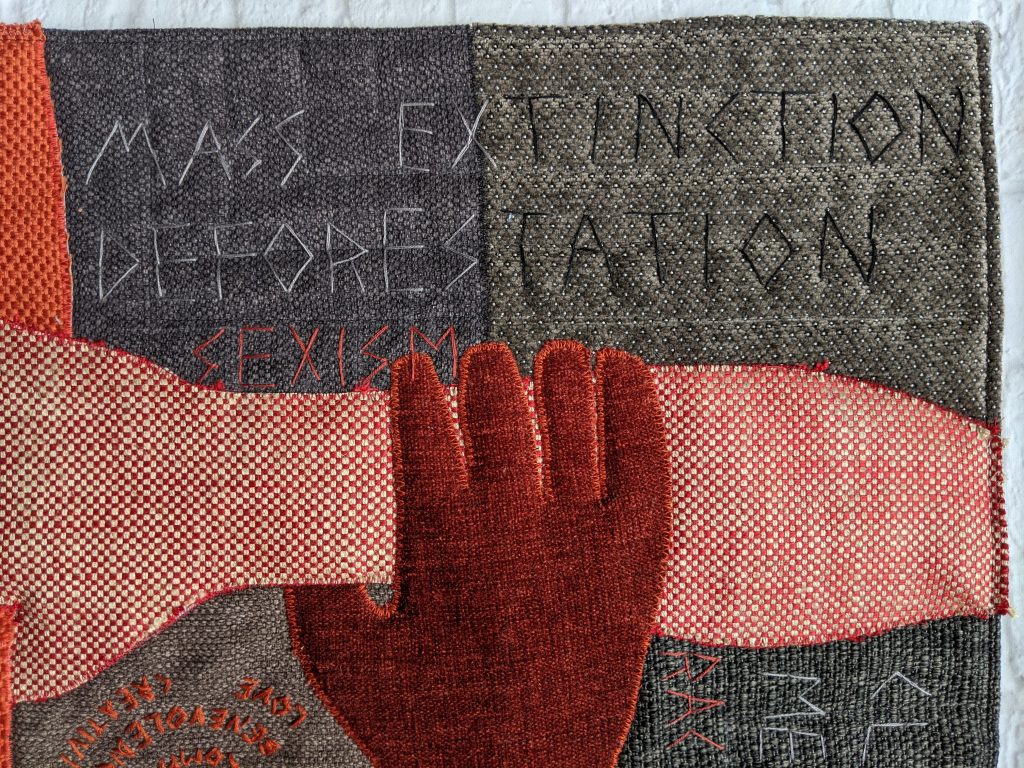 Climate change. Mega eruptions. Pandemics. Environmental degradation. Global warming. Asteroids. Mass extinction. Deforestation. These are some natural threats, that include the damage that humans brought on the environment. And yes, I know that climate change and global warming are almost the same thing, but I wanted to stress this further, as I believe this to be the most prominent danger of our time.

There are many self-inflicted threats as well, caused by human shortcomings and shortsightedness. I only had room for four: Racism. Xenophobia. Antisemitism. Sexism. Imagine a world without those! 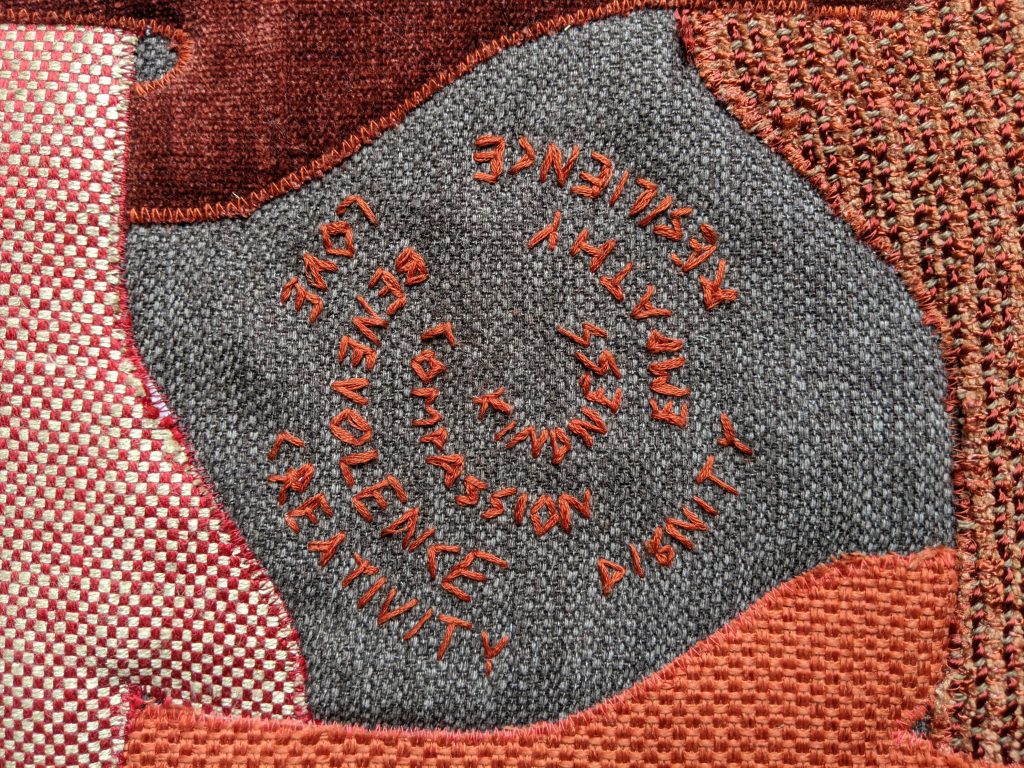 These, and other unique qualities I didn’t have room for, are the hope of our spices and the planet we olive on. These are the things that might help us overcome the existential and self-inflicted threats we’re all facing. The things that make us human and unite us. These are also the things we desperately need more of. 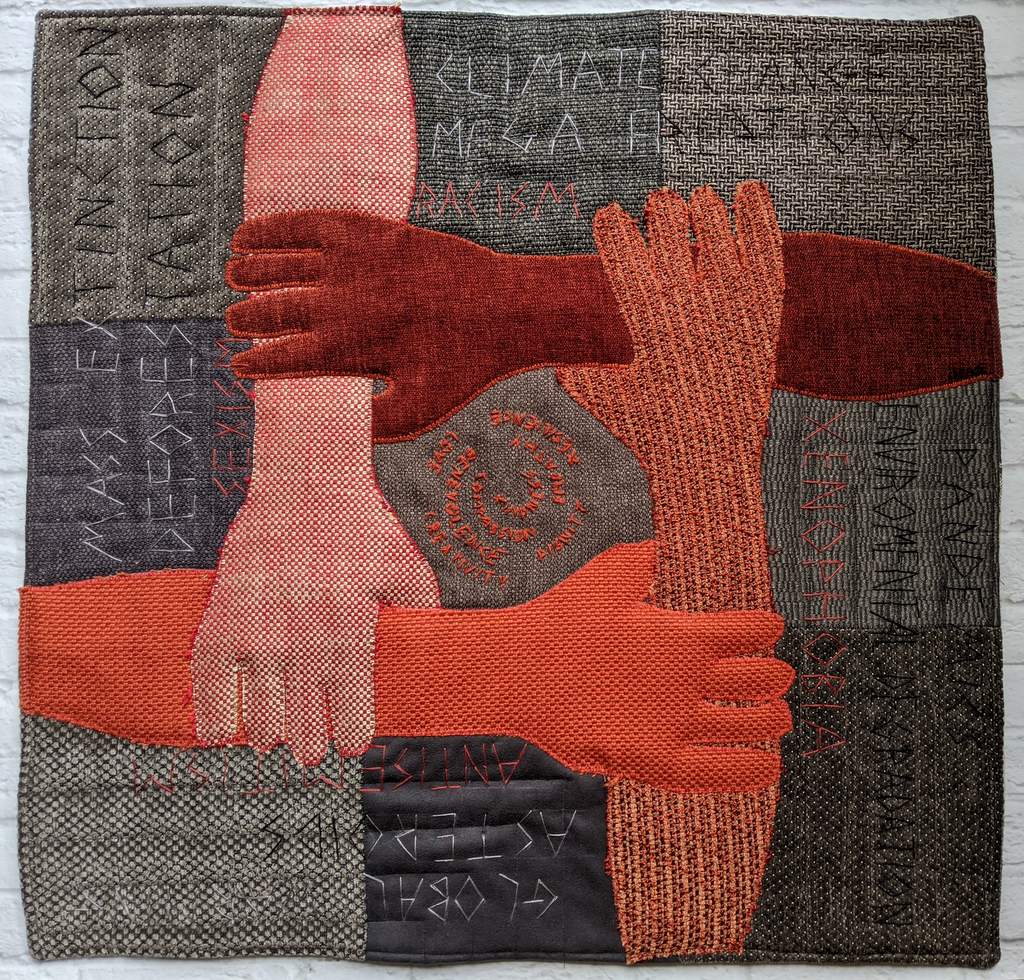 12 thoughts on ““Interdependent,” My Lockdown Quilt”