Discovering Ainu textiles in Hokkaido was the greatest surprise of my 2018 trip to Japan. I knew a little about Japanese textile traditions, but never heard of Ainu fabrics. Once in Hokkaido, these textiles captivated me with their bold geometric beauty.

Who Are the Ainu?

The Ainu are the indigenous people of the island of Hokkaido. Originally from Russia, they populated the island for over 20,000 years. For centuries, they were hunter-gatherers who lived off the land, relying mostly on fishing and hunting.

The Ainu see themselves as a part of the natural world. They believe that spirits dwell in every thing or being in this world. They regard animals, plants, and things like fire, water, clothes or tools, which are essential for everyday life, as well as things like diseases or weather that are beyond human control, as kamuy (gods).

Bears have a special importance in Ainu culture. There are over eighty words in their language to describe bears. The Ainu saw bears as gods in animal form and as gifts of the gods.

The Ainu collected bear cubs born during hibernation. They hosted them in their homes, treating them as honored guests or as one of their own children. 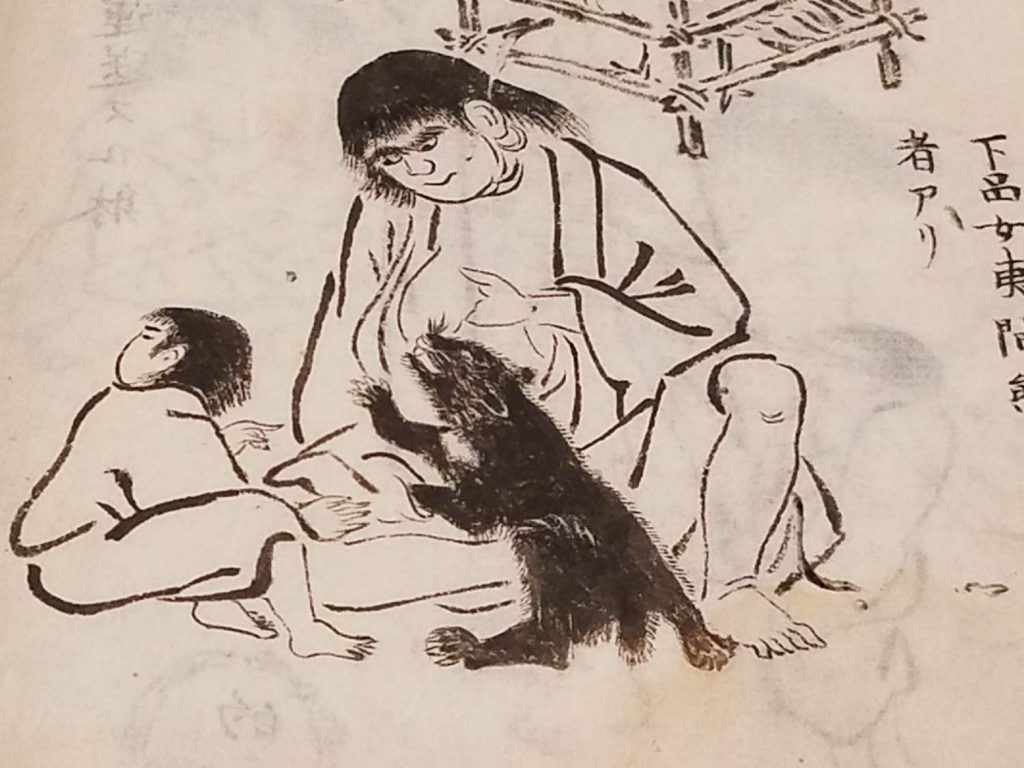 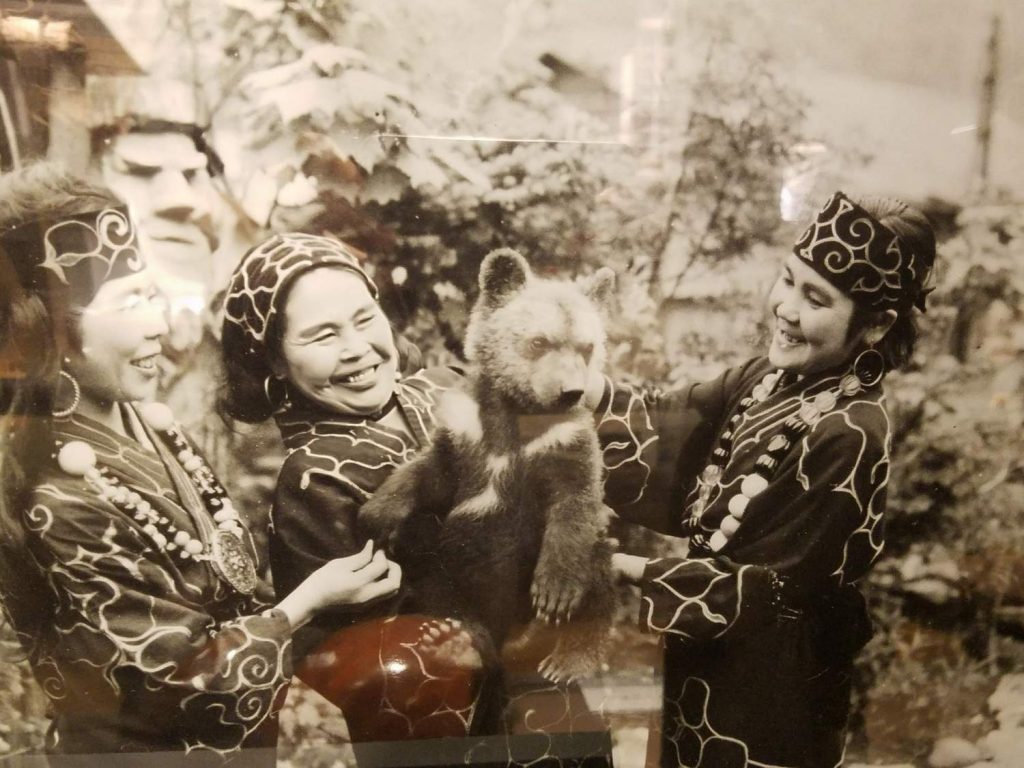 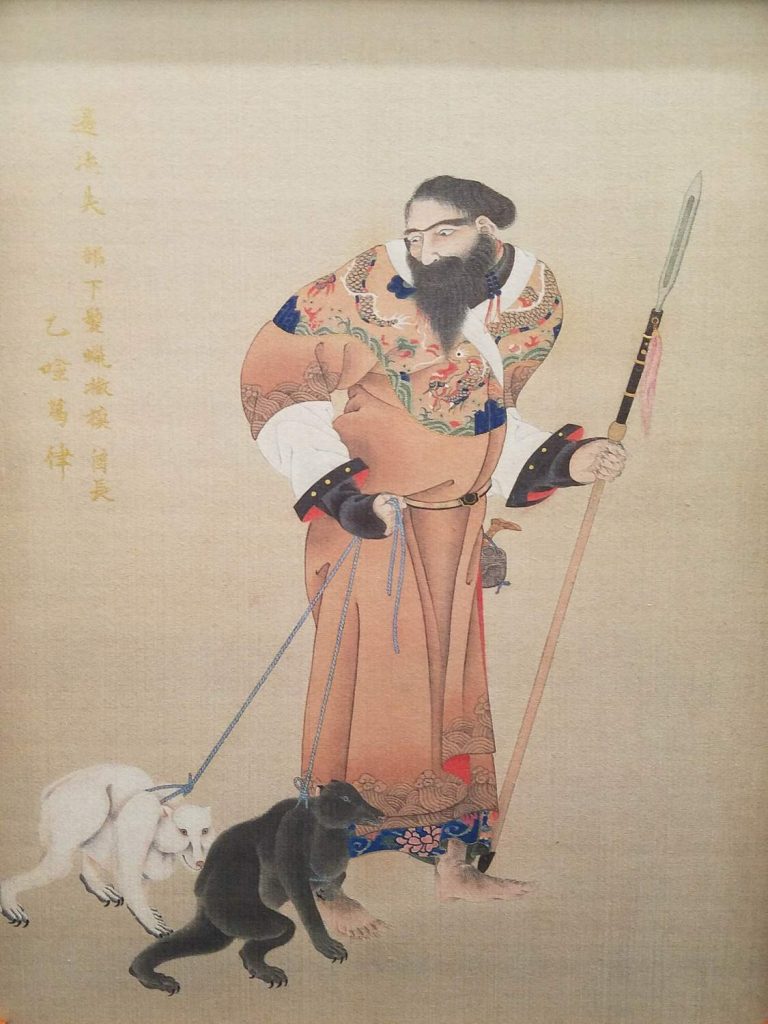 After a cub turned two, the Ainu performed a ritual called iyomante. The ritual lasted three days and three nights, during which they separated the cub’s spirit from its body, helping it return to its real mother in the realm of the gods. The bear’s fur and meat were considered a great gift from the divine.

Japanese started interacting with the Ainu as early as the 7th century. With time, Japanese immigrated to the island and started settling it, restricting the Ainu more and more. In the Meiji period (beginning in 1868), the Japanese fully annexed Hokkaido (for more on the Ainu and the fraught relations between the two people see Wikipedia).

Historically, the Ainu made their clothing out of the natural materials that were available to them. These included fish skins, animal hides and fibers woven from tree bark (especially of the Japanese elm and linden trees) or various grasses. The Ainu had clothes for everyday use, and outfits for special occasions such as religious ceremonies or festivals. When the Japanese arrived, making cotton available by trade, the Ainu began adding decorative cotton motifs to their ceremonial garments. They carefully decorated them with applique, reverse applique and embroidery. 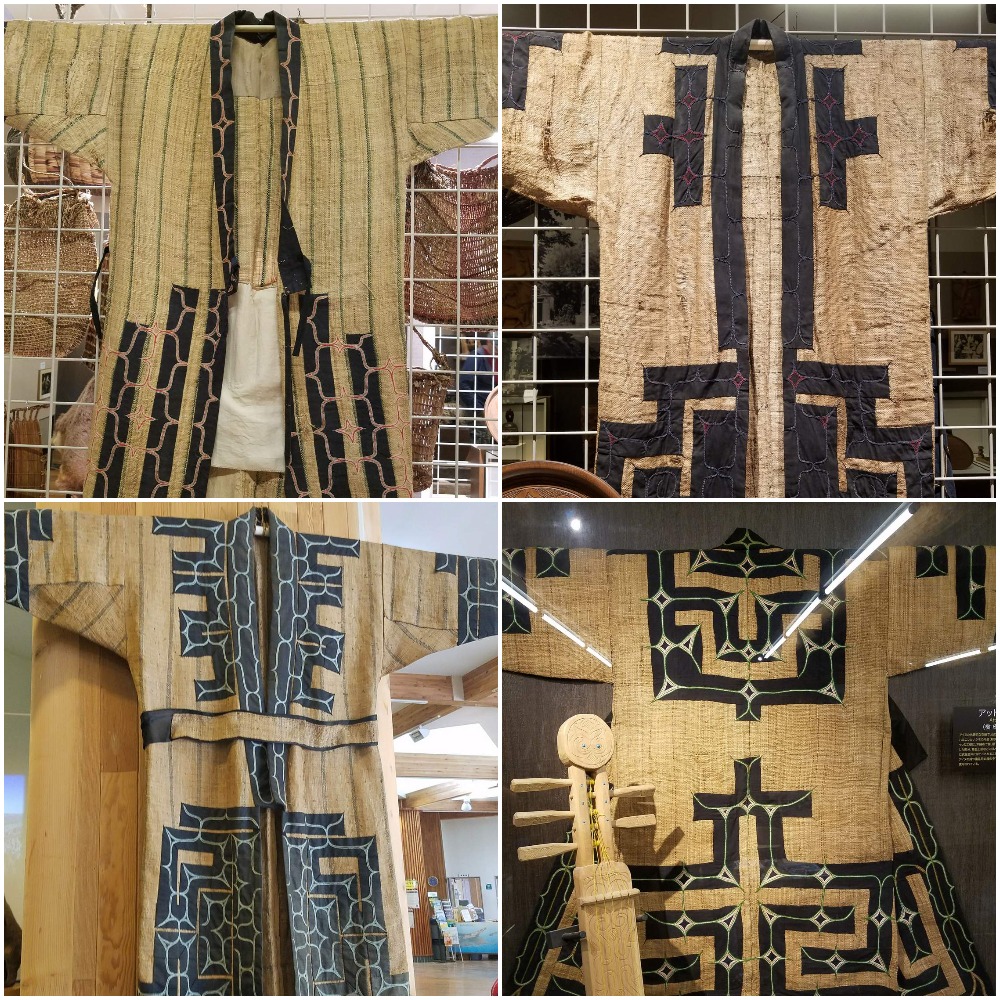 Later, when cotton was more readily available and cheaper, they started making clothes entirely out of cotton. 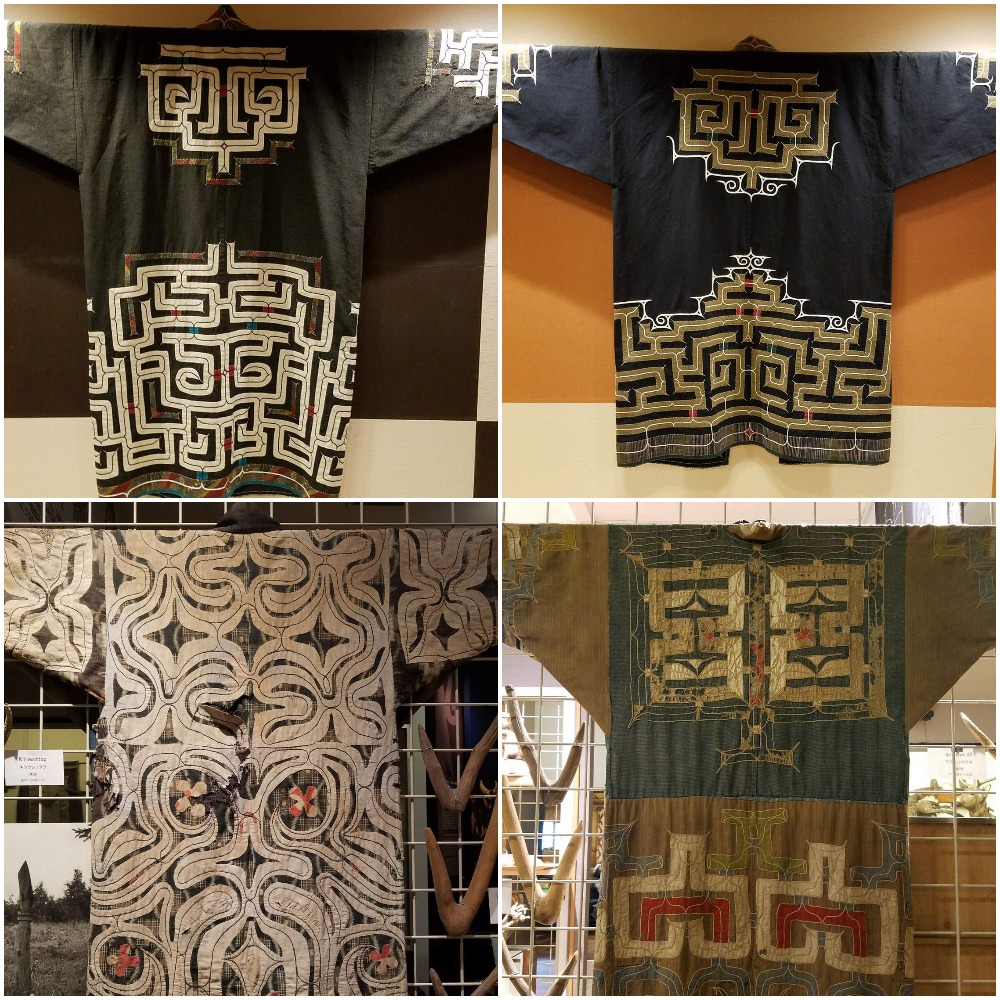 Clothes-making and embroidery were women’s work. Girls learned textile work from their mothers at a young age. The ornamental patterns they used varied by lineage and region, though some motifs were recurring. Some of these included “moreu” (spirals), and “aiushi” (thornes). Women added patterns to areas of clothing considered vulnerable, such as collars, cuffs, hems and backs. They believed that the patterns warded off evil spirits, and protected the wearer. 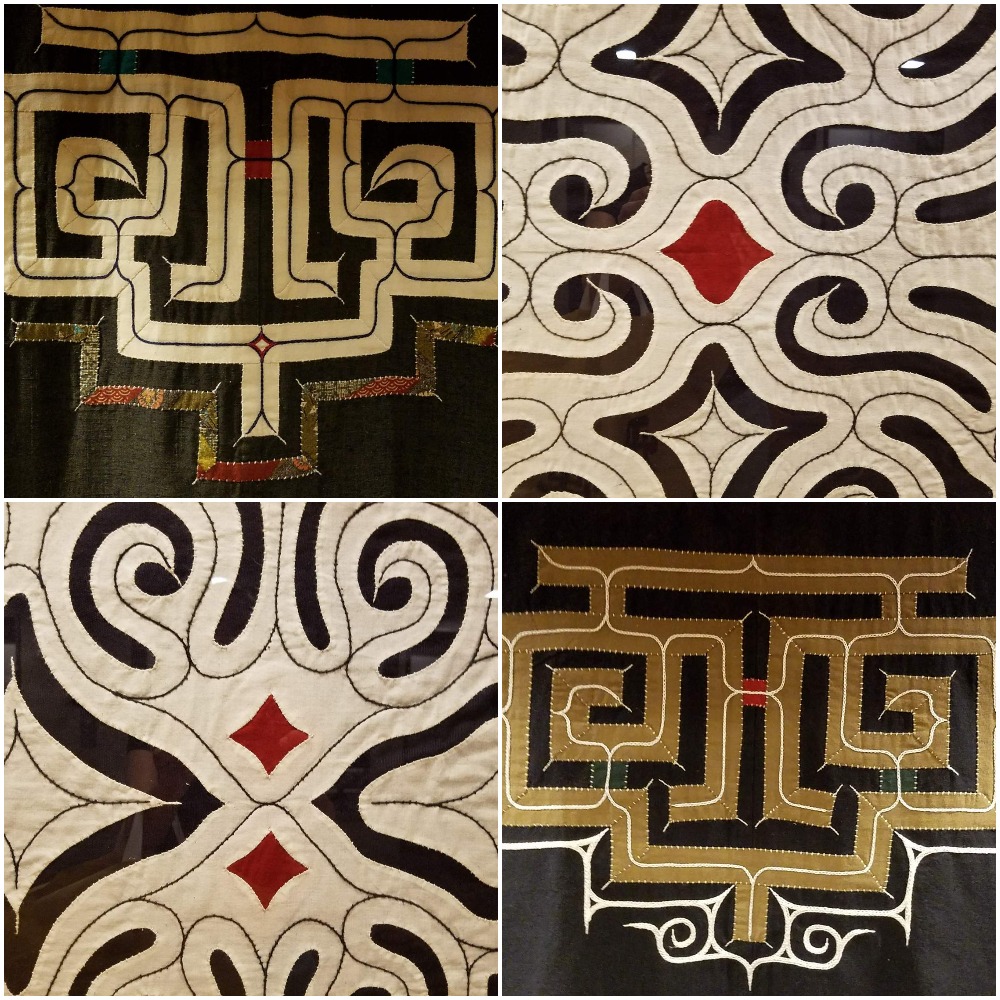 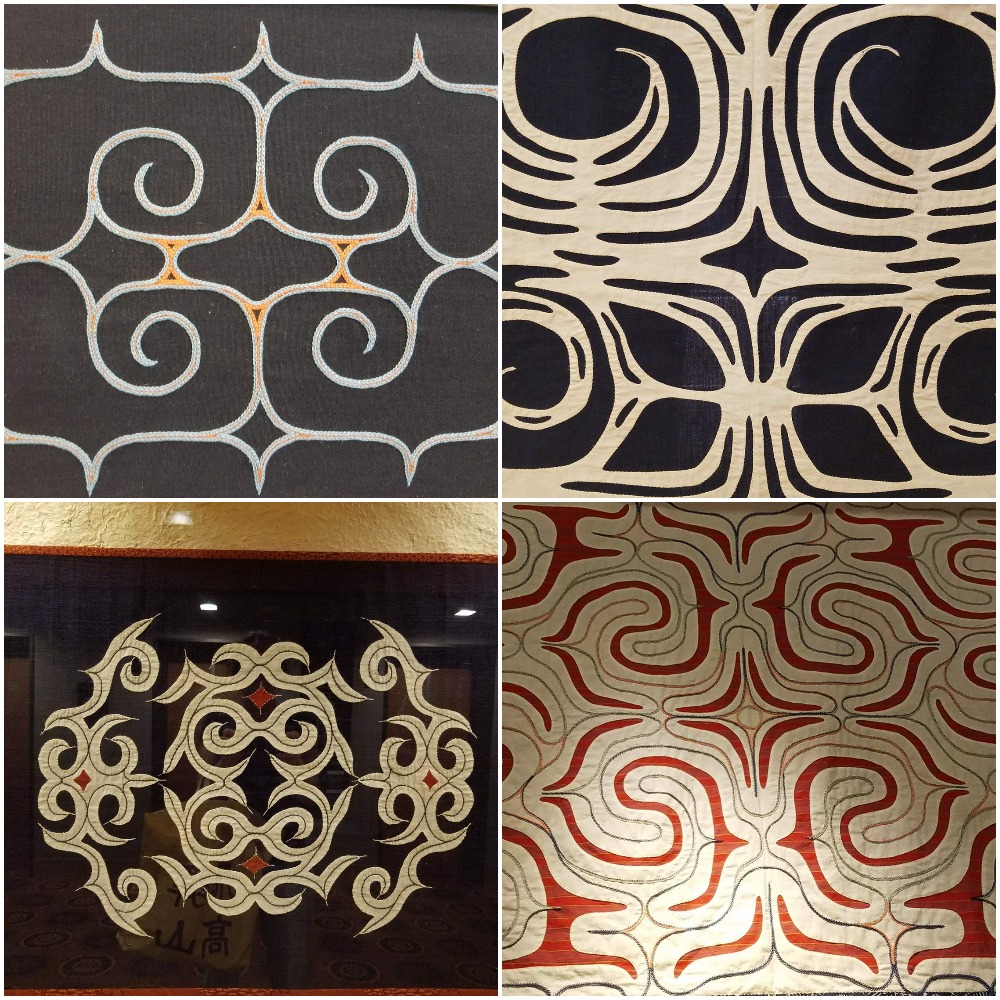 The clothes thus carried political, spiritual and symbolic meanings. The Ainu saw the cloth itself as both sustaining and helping constitute personhood. They considered clothes to be divine, and also used them for medicinal purposes. Making clothes, appliqueing and embroidering them were deeply spiritual acts.

Although I didn’t necessarily understand the symbolism behind the Ainu garments I saw during my trip to Hokkaido, I could certainly feel their raw power.

If you’d like to learn more, there are several books about Ainu textiles, as well as many articles. The quotes above are from this article. You can see another example here.