On Objects, Spaces and Memories: A Still-life Portrait of My Late Mother in Law

My father in law had always been proud of his house, a three-floors-plus-basement townhouse just outside the old city of Bern, Switzerland. He liked to tell people that the house was over a hundred and thirty years old, and that he and his family had lived in it for over a third of its history. My husband and his sister grew up in that house, which still has most of its original architectural details. Our children and I, too, stayed there many times over the past two decades, for weeks at a time.

When my father in law passed away several years ago, the house felt emptier, but remained pretty much unchanged. My mother in law laboriously decluttered many of her husband’s possessions (he was an avid collector). Still, except for minor changes and renovations, she left things pretty much as they had always been. We saw the house as a given. It was a constant, predictable presence in our world, something we took for granted.

A few weeks ago, while on an exciting summer trip, we received the call that every child dreads. My sister in law informed us that my mother in law, who had already been in the hospital for a couple of weeks, had taken a turn for the worse and that time was running out. We immediately abandoned our adventure and headed to Switzerland on the first available flight.

When we arrived at the house that we had known for so long, I was struck by how different it felt. My mother in law left it for a medical emergency, expecting to return within hours and leaving everything in place. It felt like Pompeii, displaying a life interrupted mid-way. We kept expecting her to come out of the kitchen, go down the stairs, or come in from the garden. The quiet house screamed of emptiness and longed for its owner.

A week and a half later she did come back, and everything felt right again. Except it wasn’t really, and a few days afterwards she left it, and us, for good.

After my mother in law passed away, I wandered throughout the empty rooms. Slowly, the unthinkable truth daunted on me. I realized that with her passing a chapter had ended. A chapter in our family’s story, as well as a chapter in the house’s history. I suddenly understood that this was the last time I will stay in that grand old house, and that within weeks it will change beyond recognition. The house we had taken for granted, with its old furniture and heirloom artifacts, will soon cease to exist the way we knew it.

As I looked around, I slowly comprehended that for me, my mother in law was inherently inseparable from the house. The furniture she used, the pictures she hung, the objects she possessed were all a part of how I saw her, of who she was in my eyes. I started thinking of how we all shape our spaces to fit our tastes, and how these spaces shape us in return. The objects we surround ourselves with express our personalities, yet, as we use them, also take a deeper meaning as they become a part of who we are, a part of us.

I looked at the empty house and saw my mother in law in every corner. I then took pictures of the parts of it that were most significant to me, before they disappeared for good. These pictures are in essence a still-life portrait of my late mother in law.

A still-life portrait of my late mother in law:

This is the coffee corner in the kitchen. It’s where her days, and ours, when we were visiting, started. It used to house an older, much bigger coffee machine, on which our eldest daughter, as a toddler, used to make coffee for her grandfather. But several years ago, when that machine broke, my mother in law replaced it with a smaller, more convenient piece: 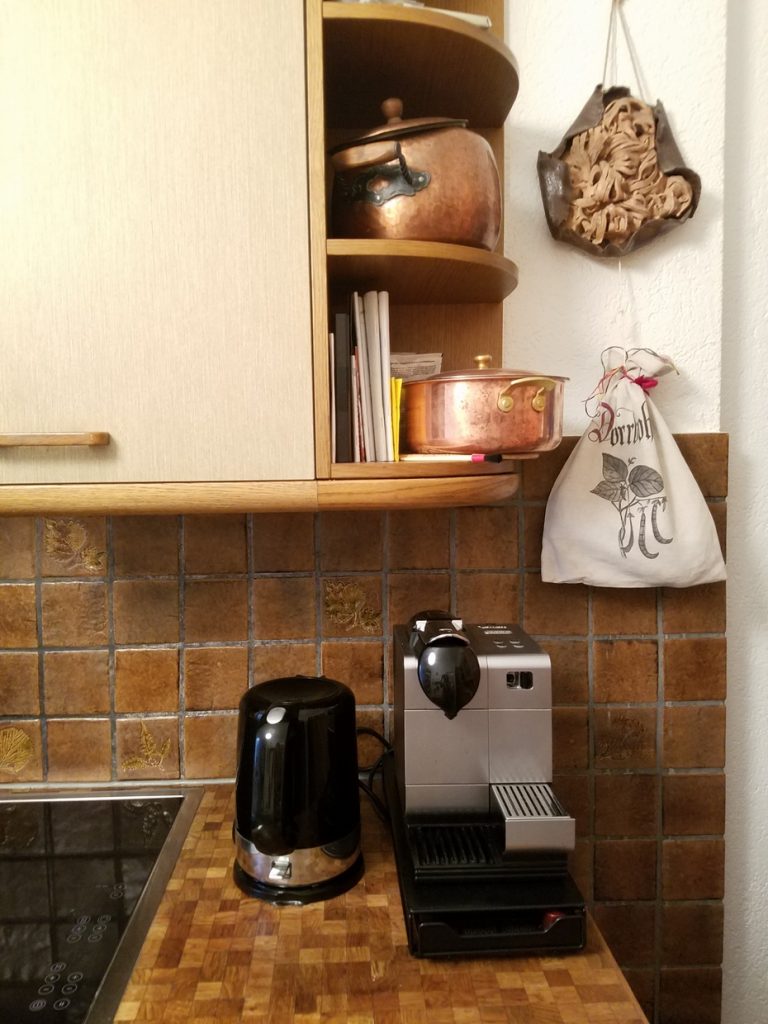 And this is the opposite wall in the kitchen, with my mother in law’s prized collection of copper cookware, which she kept polishing; the corn-kernels-filled clock she got from friends in the US; the flowers she always kept on her breakfast table; and the ever-present daily newspaper: 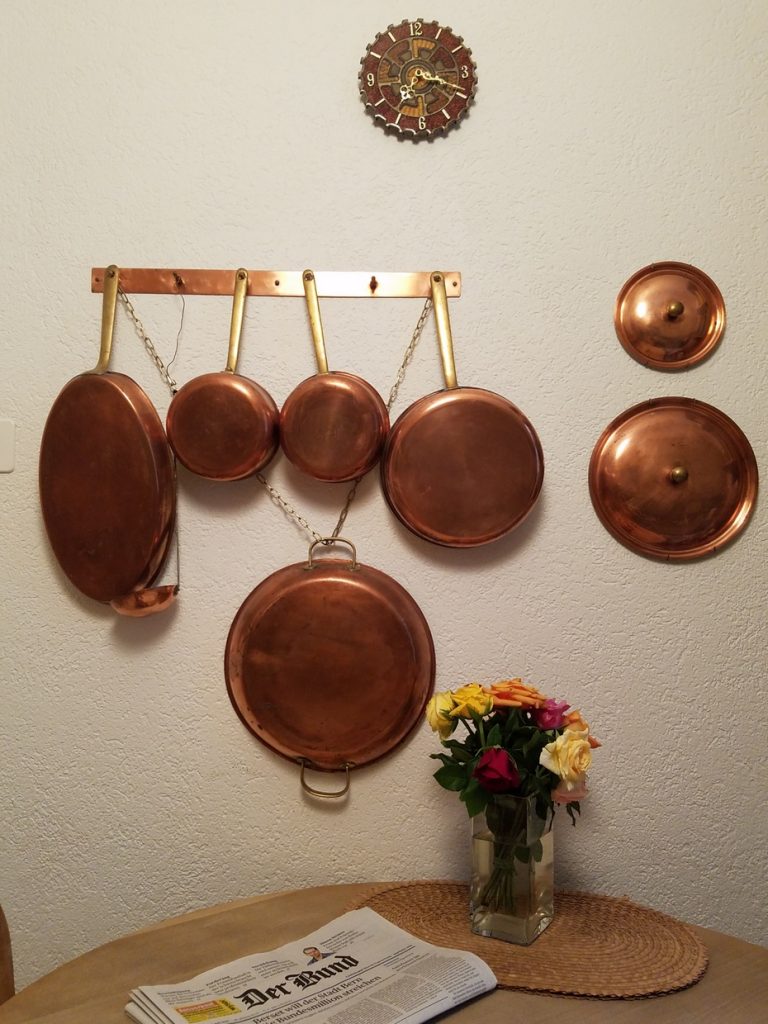 My mother in law used these dishes every day, for every meal, for who-knows-how-many decades. I will always think of her when I see a blue plate: 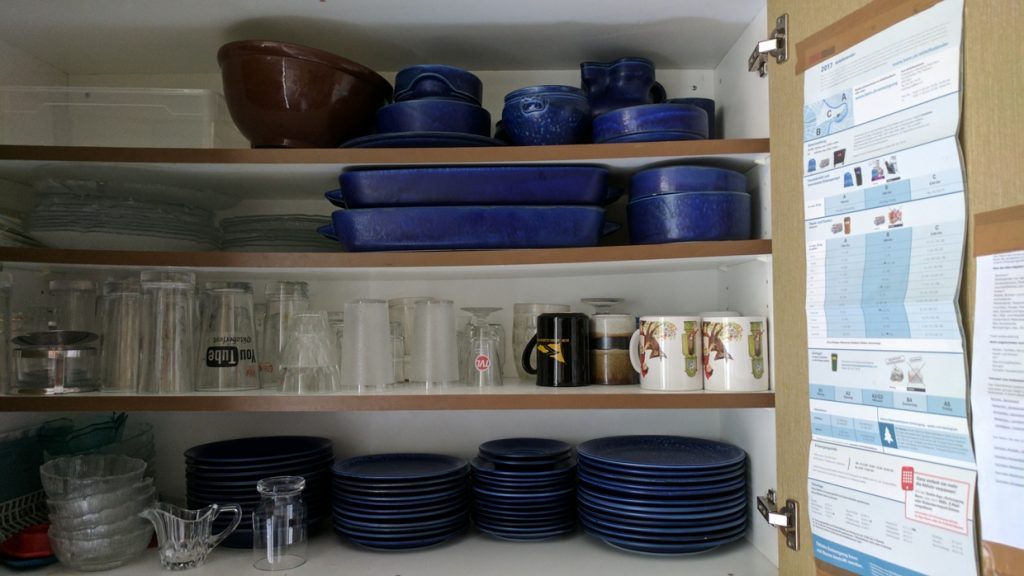 This is the fridge, with the grand kids’ pictures and the many magnets my kids spent hours playing with: 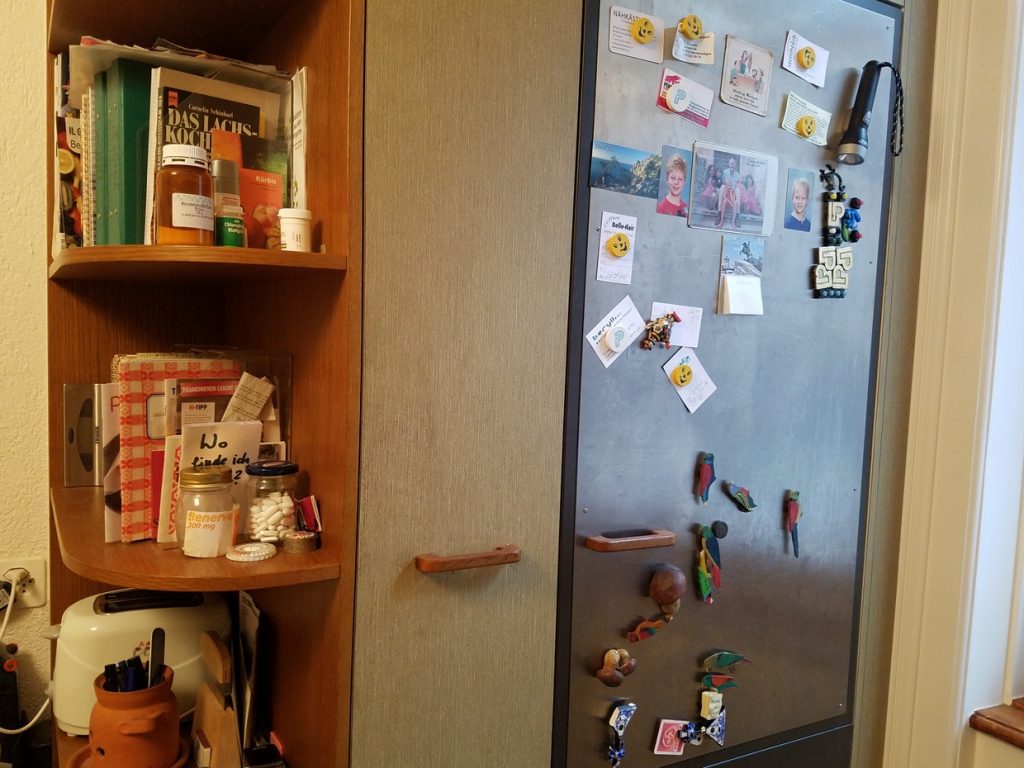 In the nearby living room the beautiful old stove, covered with tiles: 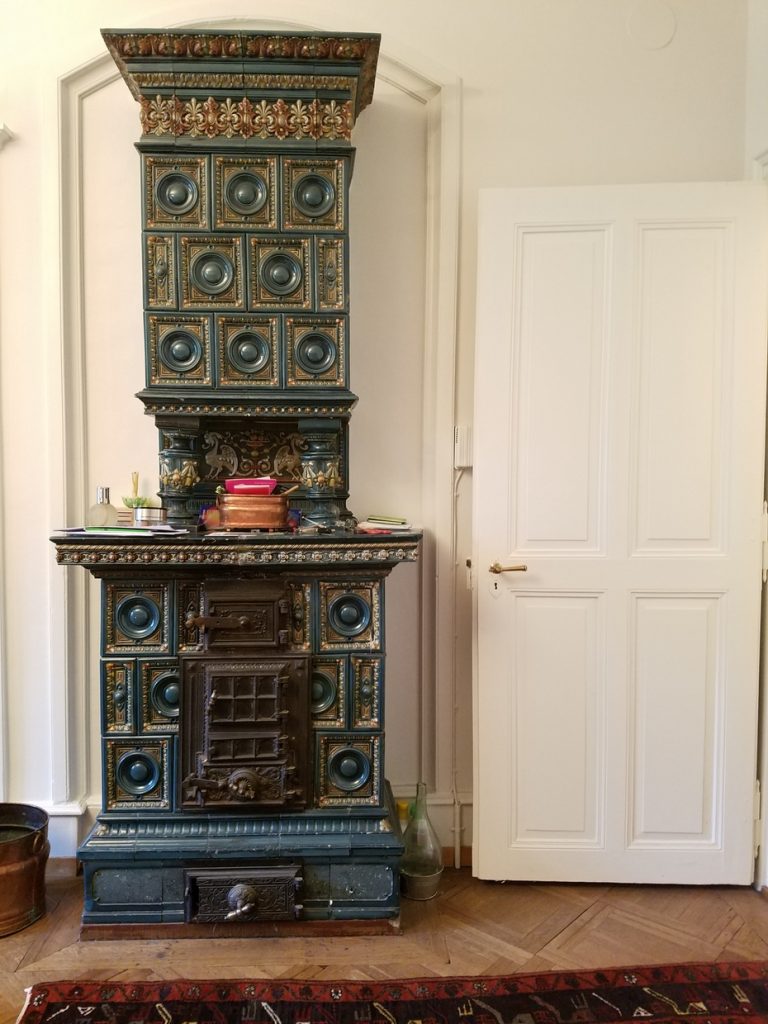 The corner by the big window, the brightest spot in the house, where I loved reading books, when I could: 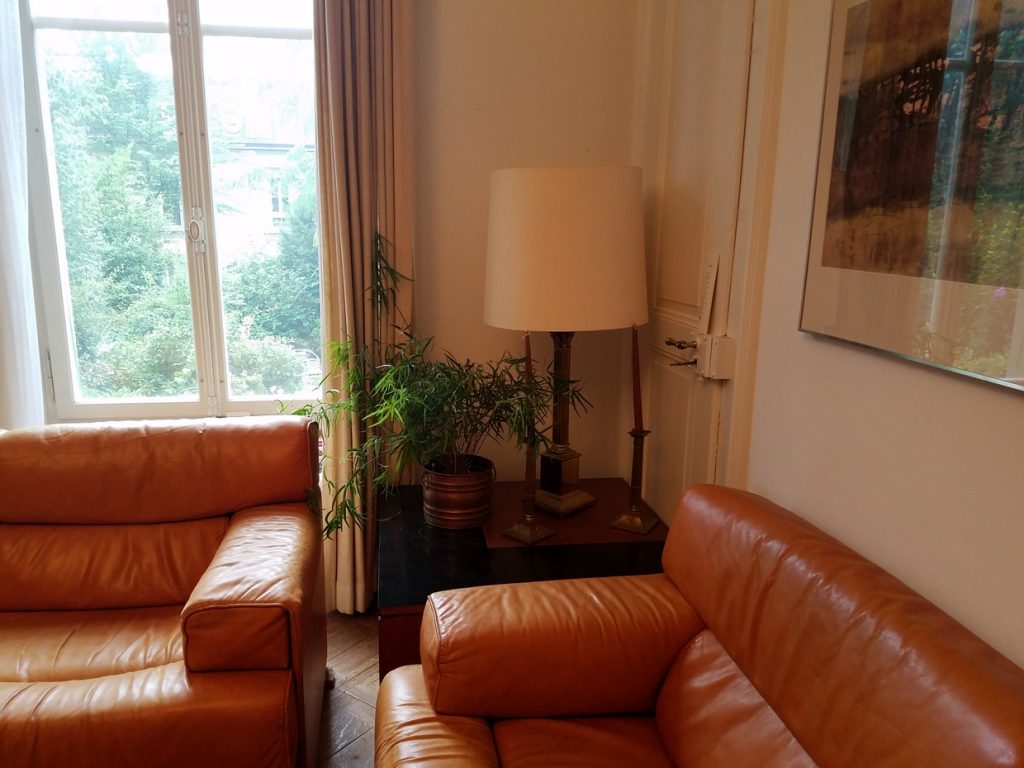 And the opposite wall, with it’s books and nick knacks, baptism bottles, and the painting a friend gave them: 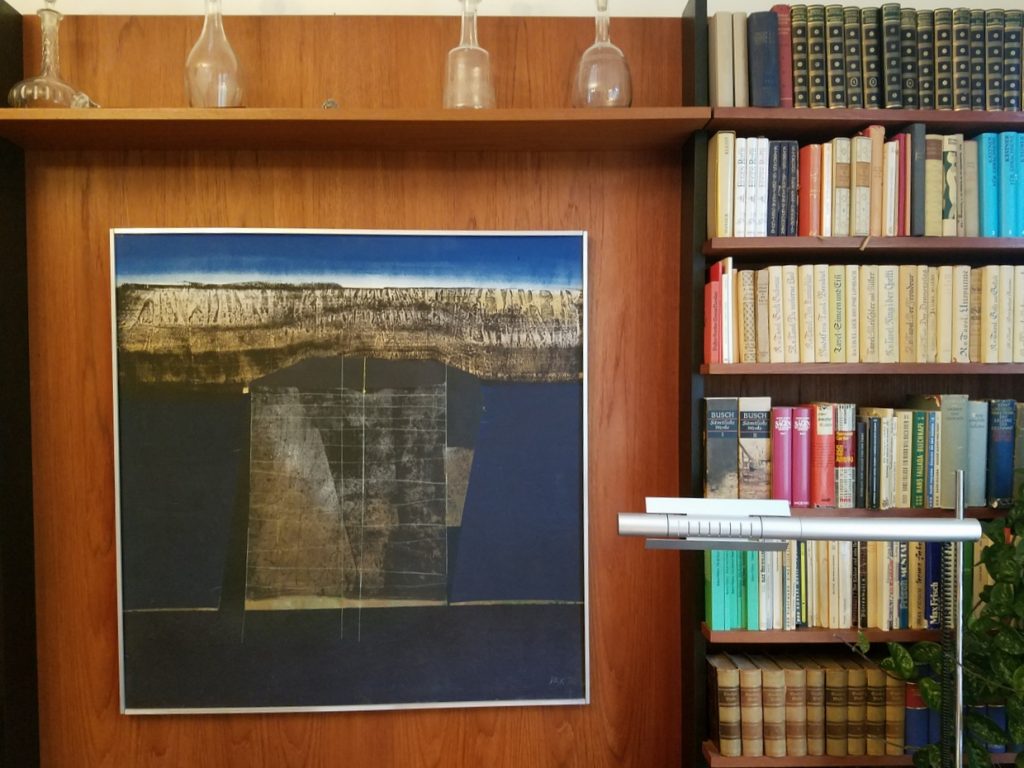 Also, ever present, a sunflower, her favorite flower. This last one, although cut and in water, actually outlived her: 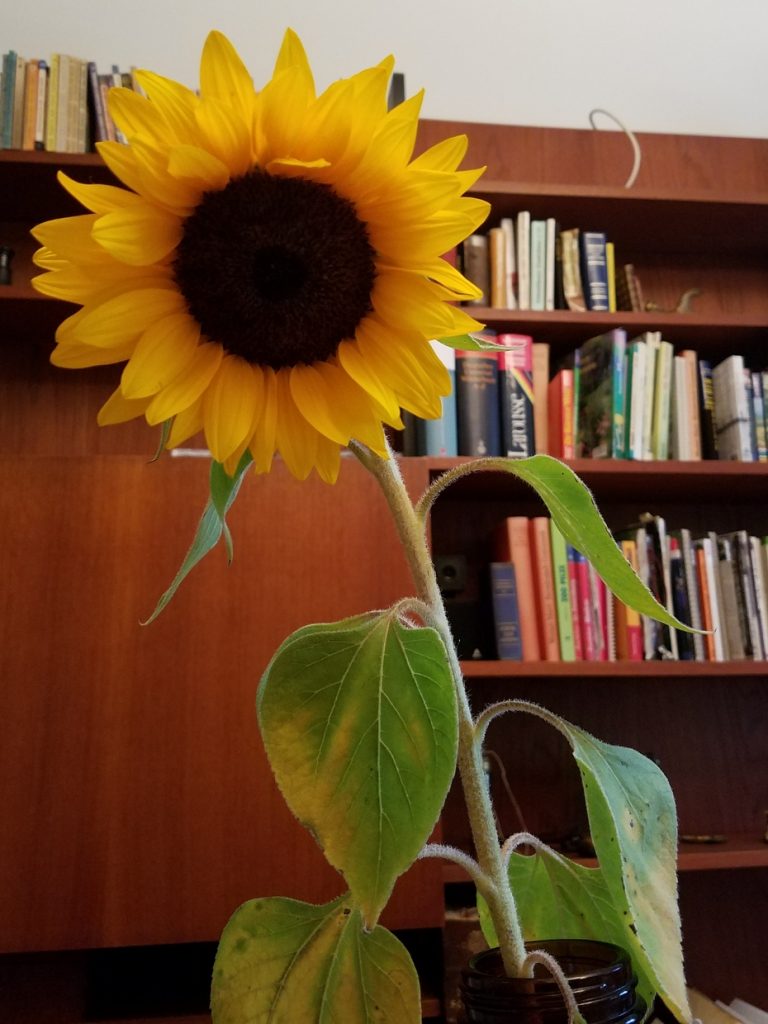 The adjacent dining room featured the other side of the stove, with different tiles: 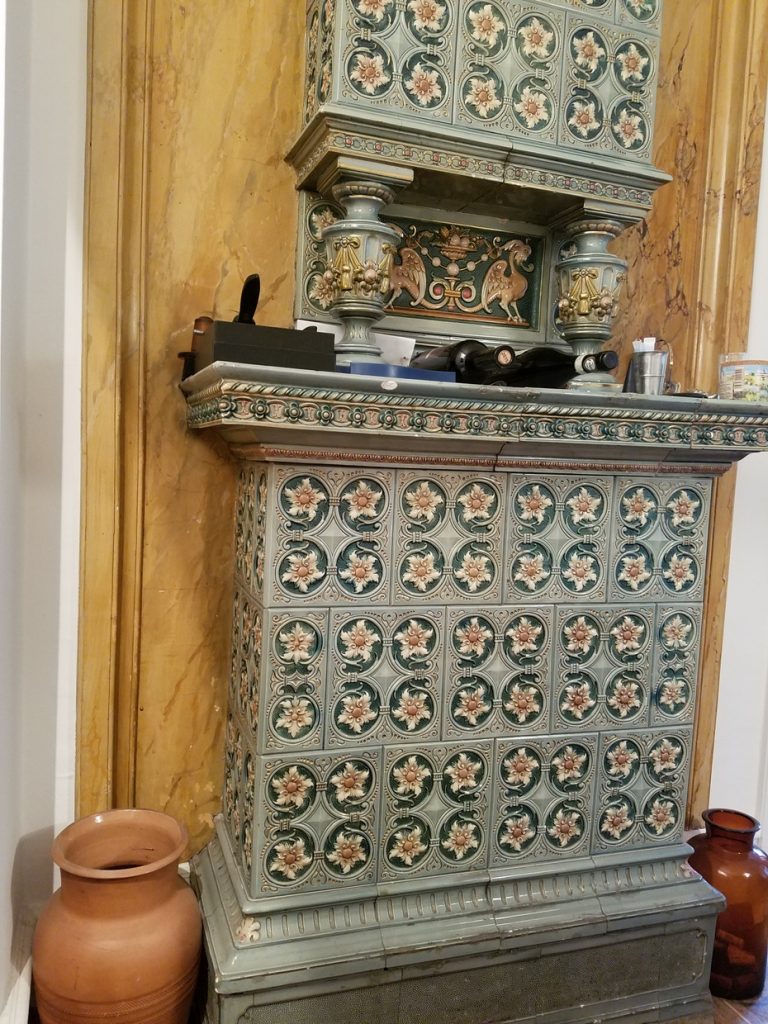 As well as these three paintings, painted by another friend, and a fake-flower arrangement that has been there since my very first visit. This was the setting for many of our dinners, and hers: 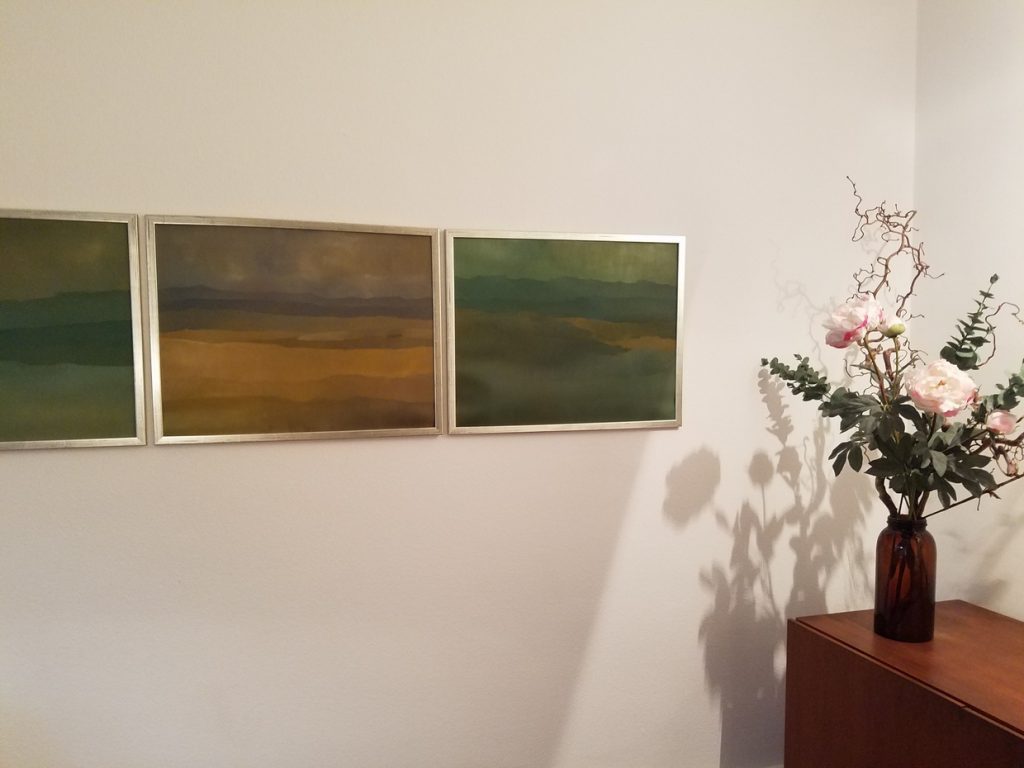 Throughout the house there was a collection of clocks, my father in law’s legacy. Some were old Swiss clocks with sentimental value. These included my parent-in-law’s wedding gift, a clock or two passed down from past generations, and a replica of a Swiss railway station’s clock. There were also new, modern clocks, to just tell the time. Clocks hung in every room, on every floor. When my father in law was alive he used to wind them every Sunday, and they all synchronized on the second. Once, we visited, and I noticed the clocks were off. That was when I knew his days were numbered. When he died, my mother in law continued with the Sunday-winding tradition. Until she didn’t: 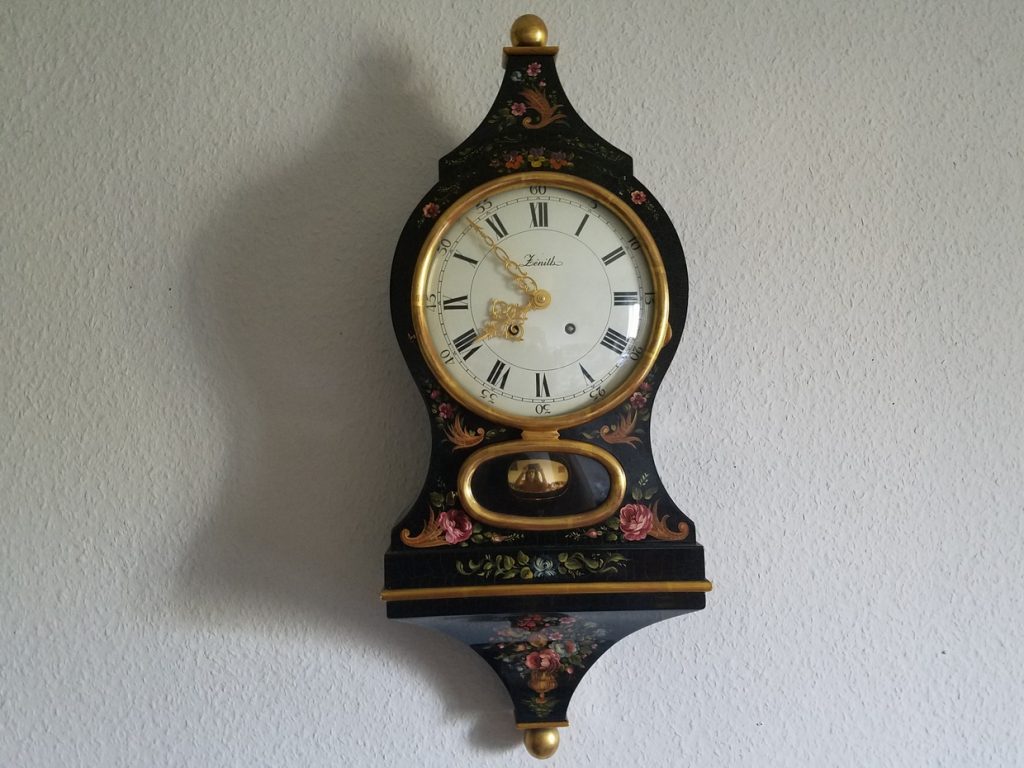 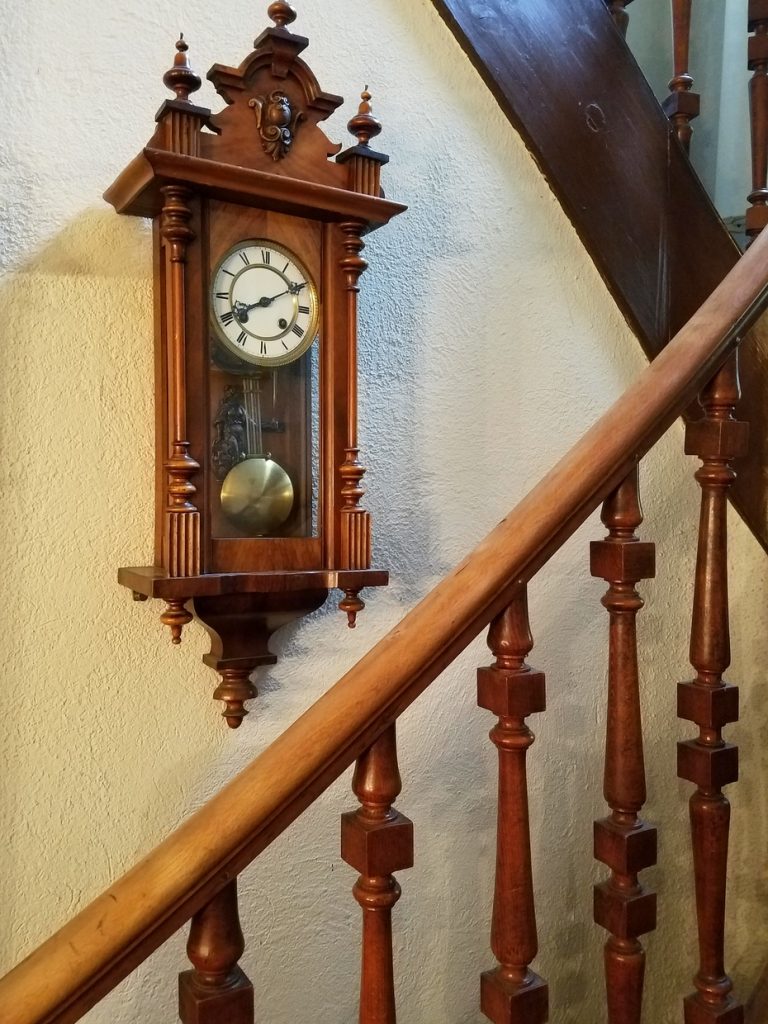 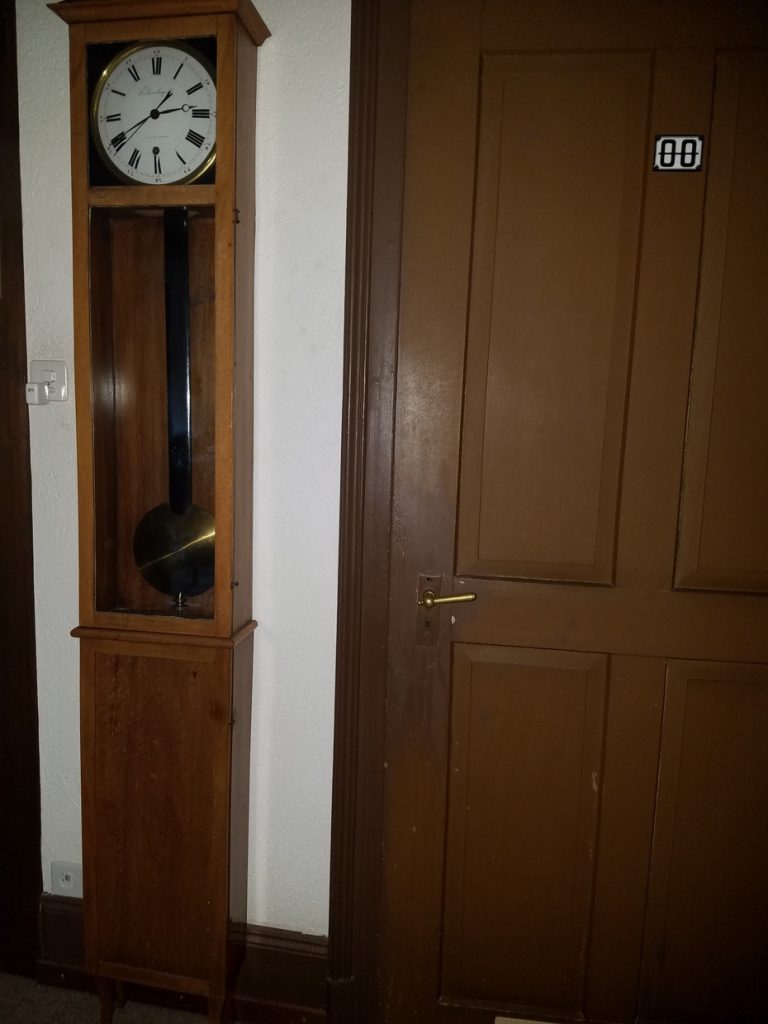 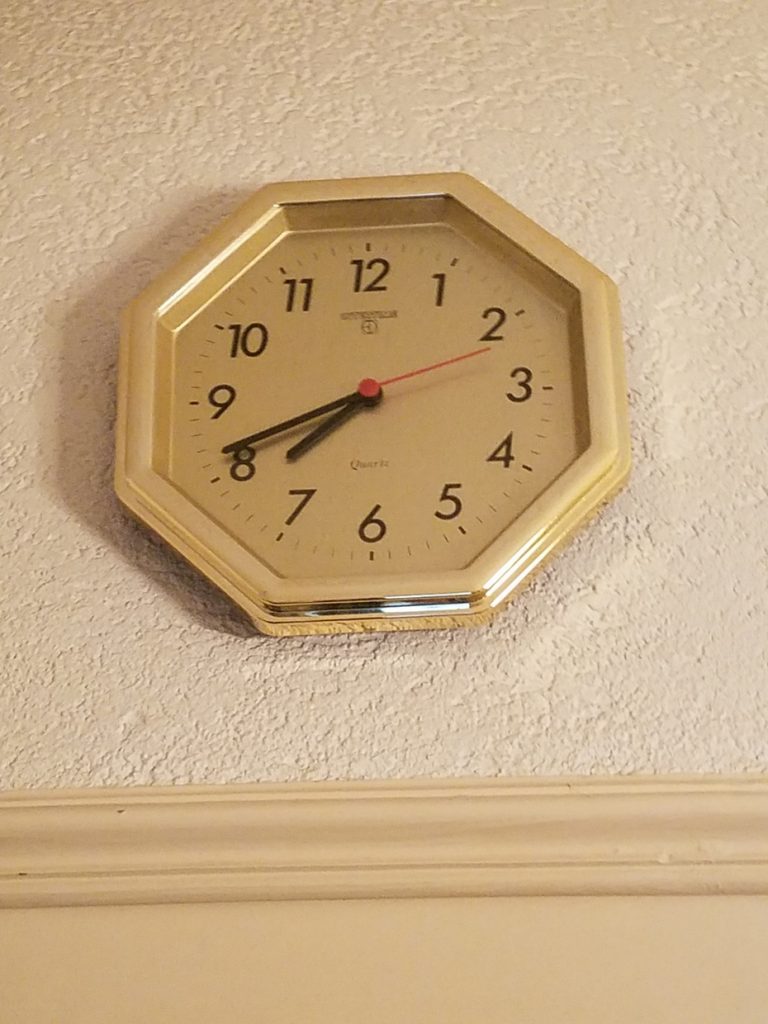 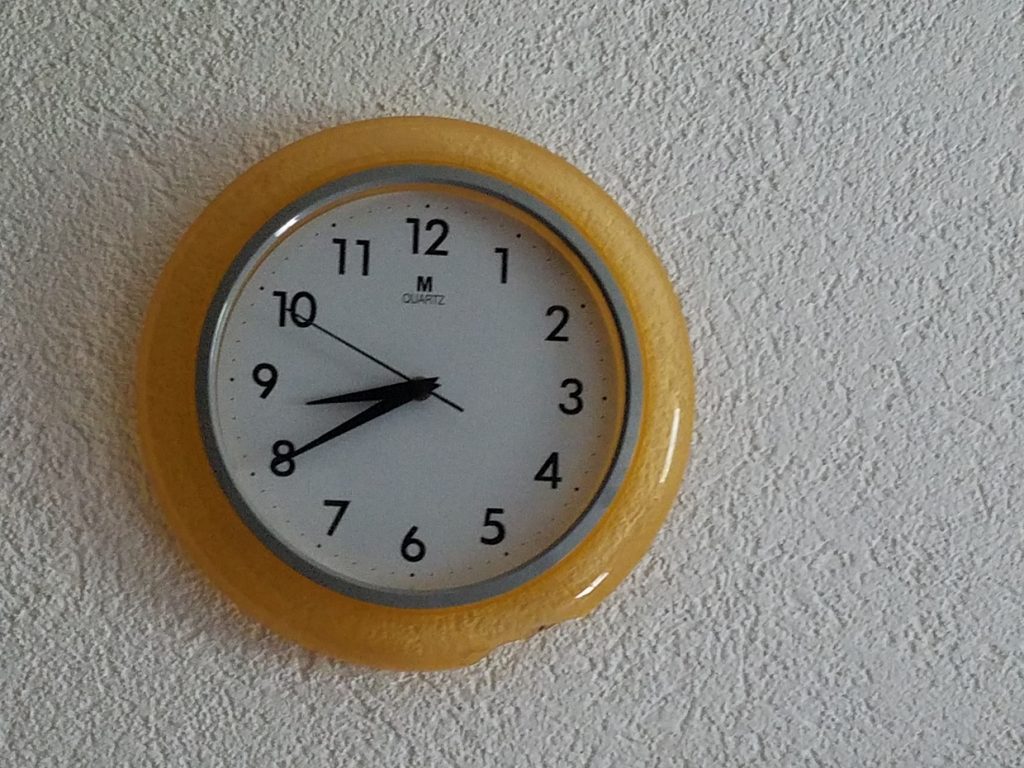 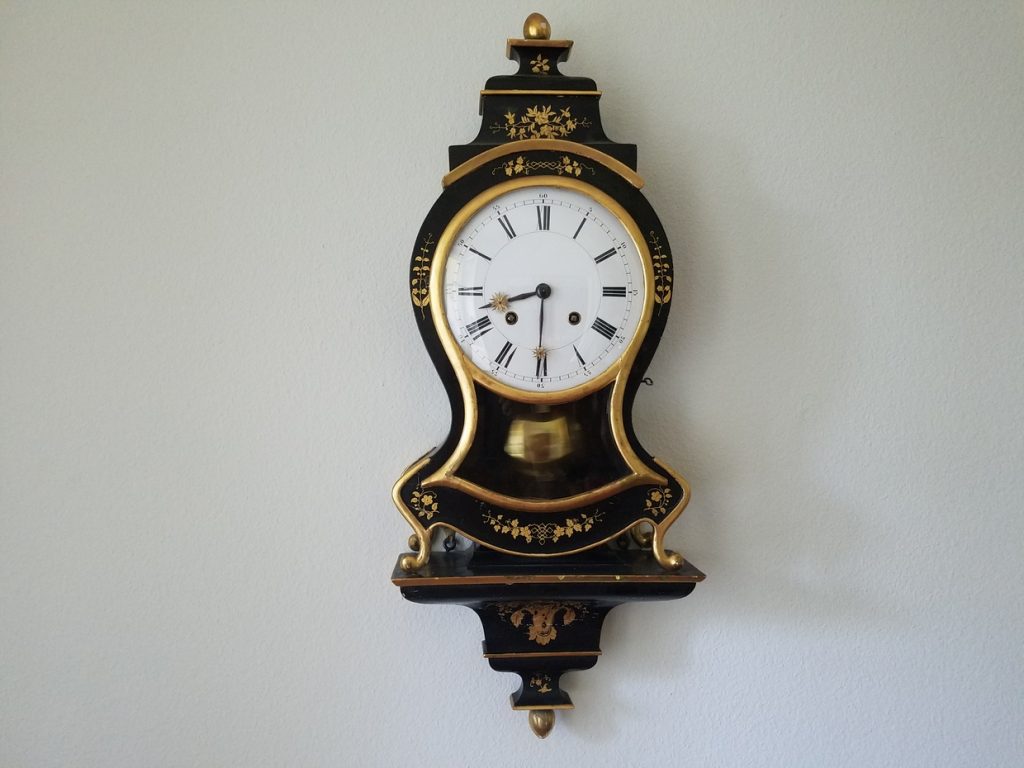 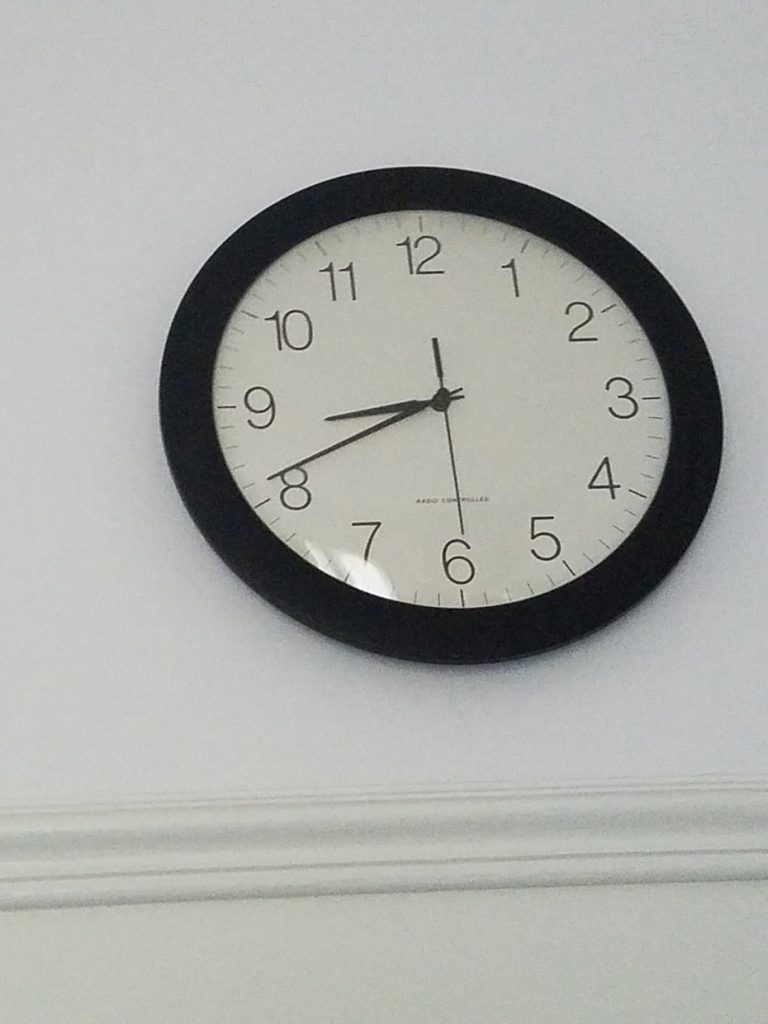 Upstairs, on the third floor, is the wall in the room we always stayed in, the room that used to be my sister in law’s when she was little. Here you see the fake bonsai, portraits of my mother in law and her sister when they were young. A work of art my husband made as a child, and a painting of the clock factory that a distant relative operated in China, long, long ago: 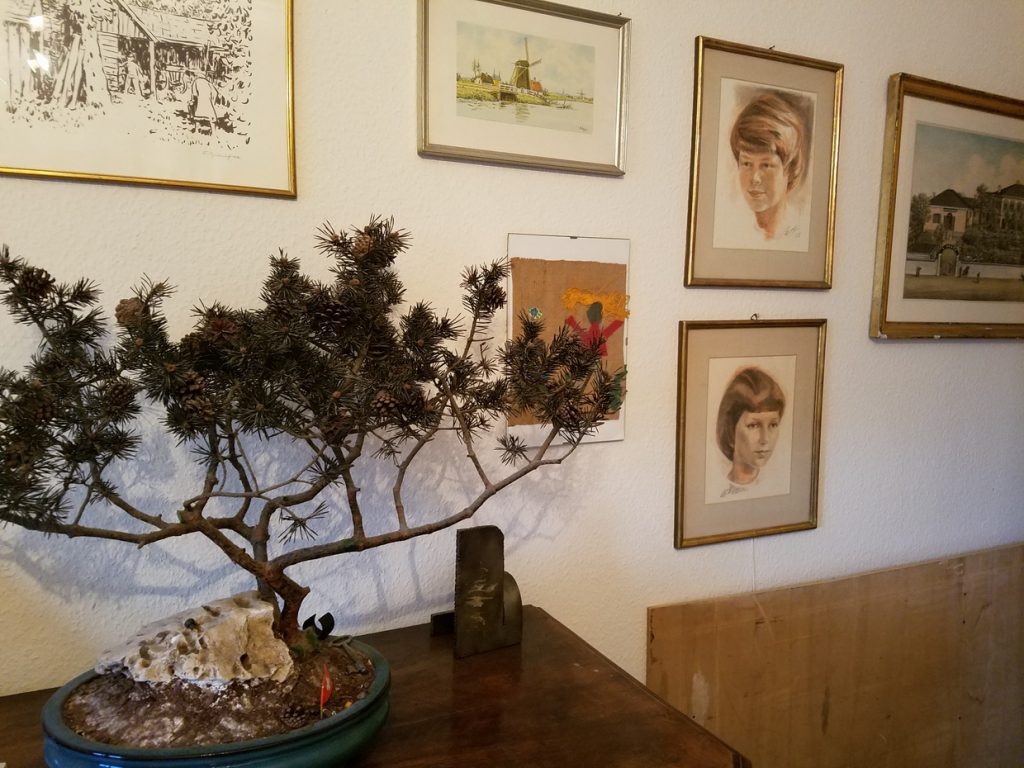 Finally, the cigarette advertisement, still surprisingly hanging on the door, larger than life. The model was my mother in law, when she was young and as beautiful as a movie star. The cigarettes were what killed her. Uncomprehendingly, she left the poster hanging even after she received the diagnosis of lung cancer. It catches her exactly as she was: strong, defiant, life-loving and doing things her way. 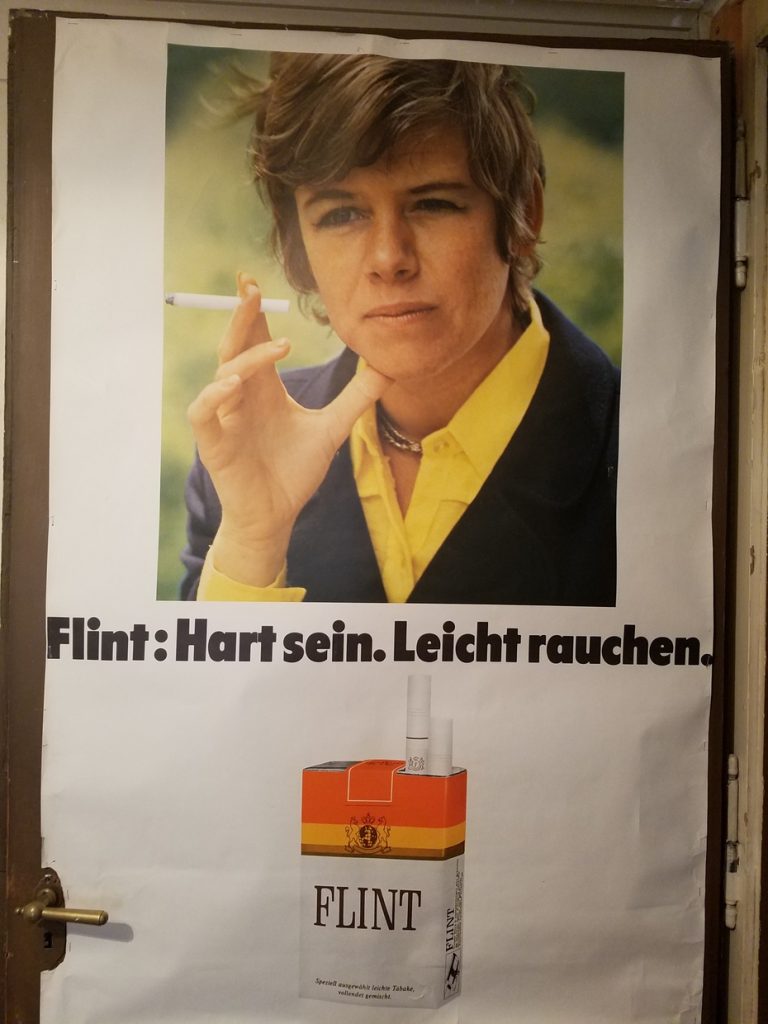 Tags:lifeSwitzerlandtravel
previousInterested in the Summer of Love but Can’t Visit SF? New York Has an Exhibition, Too!
nextWhen You Die, Everything You Own Turns Into Garbage: The Sad Truth About Tearing Down a Loved One’s Household

6 thoughts on “On Objects, Spaces and Memories: A Still-life Portrait of My Late Mother in Law”