What It Takes To Prepare For a Craft Show: Getting Ready For My First Big Fair

Up until a little over a year ago, I attended craft shows only as a customer. I loved browsing local fairs, and enjoyed looking at the beautiful things they offered. Since I started sewing in earnest, however, I began to realize that there was a lot I needed to learn about such shows. I slowly became acquainted with the other side of this world–with art shows as seen from the vendor’s point of view.

Over the last few months I participated in a handful of small crafts fairs. These gave me a taste of what it feels like to sell art in person. Recently I decided to take the leap and, for the first time, applied to a big, two-day show. I chose to apply to our local craft fair, which happened to be a juried show. Unlike non-juried shows that take first-come-first-serve applicants, juried shows require a much more detailed application, and pick their vendors more selectively. Understandably, I was quite nervous after I submitted my application. When I discovered, a few weeks later, that I got accepted, I was truly elated!

Since then I learned that preparing for a large craft show is very different than preparing for a smaller fair. My previous venues all provided a table and a shared space. The infrastructure was already there, and I just had to show up with a table cloth and inventory. This time, however, the show organizers only allotted a space. I have to take care of everything else myself.

And so, in addition to sewing my art (a daunting task in itself), I also have to design a booth display and acquire all the necessary props. Over the last few weeks, therefore, I became the proud owner of the following: 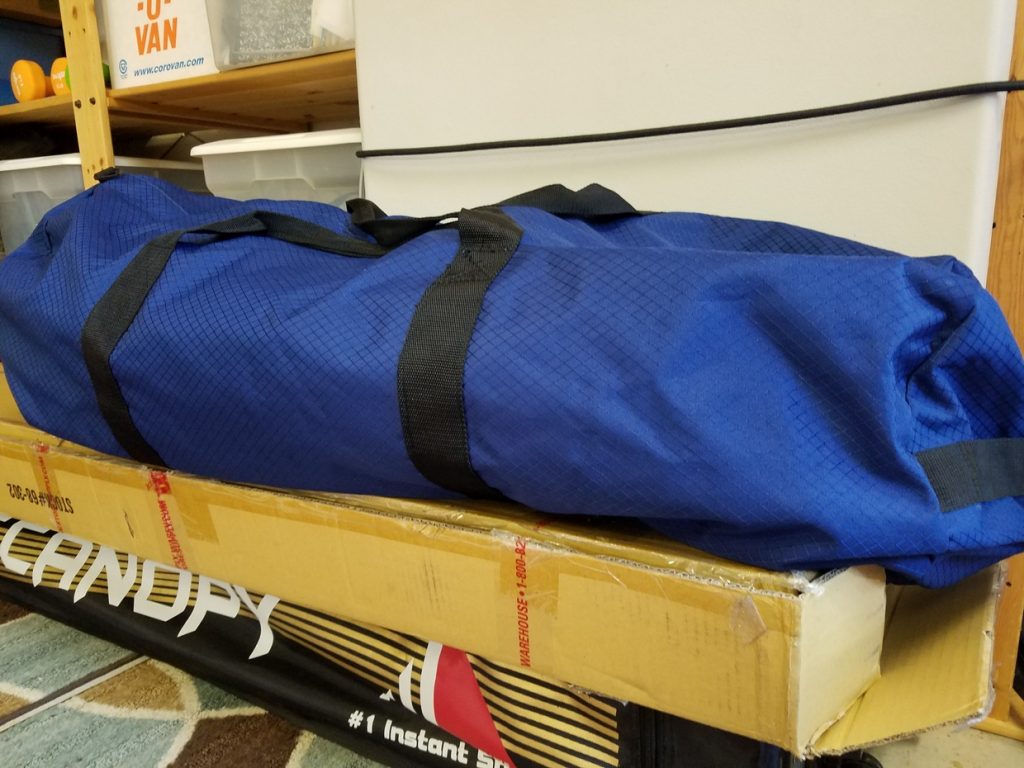 The first two items required several days of online research each. I read through many reviews and browsed numerous forums discussing canopies. I hesitantly settled on one: ABC EZ Pop-up Canopy, which I hope will be both easy to set up and strong. Choosing between different shelving options was also difficult, if a little less critical than a tent. I ended up buying shelves that look good but are light and easy to carry. I have yet to see whether I made the right choices!

My show is two weeks away, yet the preparation for it did not end with buying the equipment. In the coming two weeks I still need to get weights for my tent, so that it doesn’t tip over in the wind. I need to paint my new shelves, and finish sewing my shop banner (adding loops so that I can hang it on the canopy wall). I need to frame my price signs to make them more professional-looking and stable. And, of course, also to finish sewing my inventory. Since I have never participated in a big craft show before, I have no idea how many items I actually need. I hope I have enough, but will know better next time if not!

2 thoughts on “What It Takes To Prepare For a Craft Show: Getting Ready For My First Big Fair”