A couple of weeks ago my family and I went on our first local hike of the season. We’ve been reading about the California superbloom that followed last winter’s record-breaking precipitation, and hoped to catch a glimpse of some local wildflowers. Sadly, we soon realized that the wave of bloom hasn’t yet reached this far north. We did see one or two large flowers, as well as fields of tiny, hardly-noticeable ones. But this was not even close to what we expected.

Still, being outdoors is always rewarding. We enjoyed the freshness of the air, the awakening of winter-dormant plants, and the many different greens. Our hearts widened by the sight of a rambling river, one that actually had plenty of water, for after several years of drought we were already used to dry river beds.

And then, as we turned a bend, I saw this: 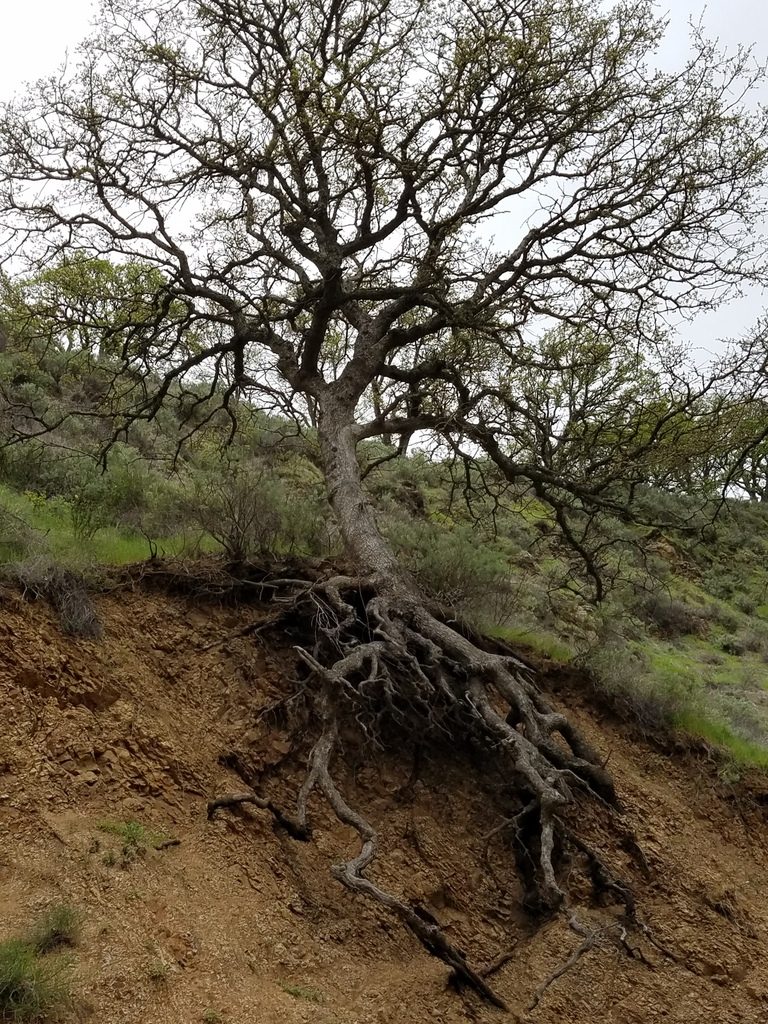 I stopped and looked at this tree for quite some time. Its strong visual presence was striking. The tree masterfully occupied the space around it, like an actor on a stage. It was as beautiful as a statue. I admired the perfect symmetry between its bare canopy and its roots. I enjoyed its dark silhouette against the sky.

There were also some sinister notes, however. It looked as if the rug was pulled from under this tree’s feet, so to speak. Perhaps the strong rains that filled the river with water also caused a mud slide that carried half of the hill away. The scene created a sense of a brewing calamity. A part of me didn’t want my kids to stay close to this tree for too long.

Yet, despite the unfortunate circumstances, this plant kept clinging to its spot. It kept hanging on with all its might. It held as if its life depended on it, which it did. The tree defied losing half the hill. It braved the exposure of half of its roots. Nevertheless, it persisted. And its budding leaves proved that it was prevailing against the odds.

I could not help but admire this tree. I thought that perhaps we all have something to learn from it.

Tags:hikingnaturespringtravel
previousGetting Into Spring Mode: A Visit to Filoli Gardens
nextWhat It Takes To Prepare For a Craft Show: Getting Ready For My First Big Fair