My family and I have been traveling a lot, but our trip to Ecuador this winter break was our first-ever foray to South America. The trip lasted only eleven days (not including travel), but felt a lot longer, being packed as it was with an array of experiences. I find it impossible to summarize everything into one post, so today I will share only my impressions of Quito, the capital, which we visited on our first day, and to which we kept returning.

The Old City of Quito

We landed in Quito in the wee hours of the night. I was surprised (and maybe just a little bit disappointed) to find a brand-new, top-notch modern airport. It looked just like any other airport anywhere else in the world. We took a cab to the old part of town, driving through dark, deserted and foggy roads. When we arrived at our hotel, utterly exhausted, we barely noticed our surroundings and went straight to bed.

At 9,350 feet above sea level, Quito is the highest capital in the world. In the morning, therefore, I woke up with a searing, altitude-induced headache (luckily ibuprofen worked!). In daylight, we could fully appreciate the beauty of our hotel. It was a magnificently-restored sixteenth-century Spanish colonial house, seeping with atmosphere. We so much enjoyed eating breakfast at the courtyard dining hall (see below), that I truly wished I could keep eating forever… 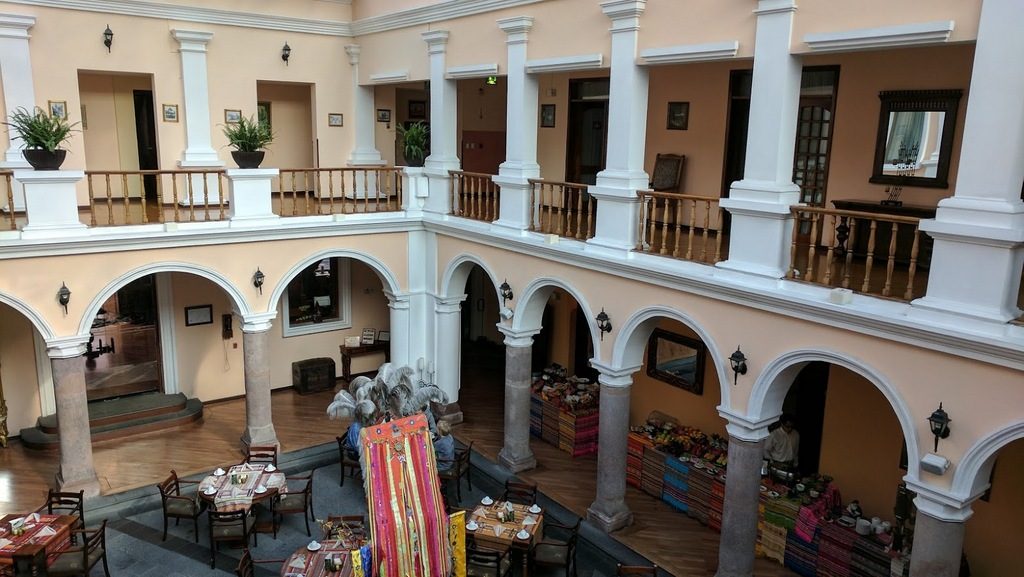 The kids were full of energy, however, and eager to explore. And so, I tore myself away from the Ecuadorian coffee and delicious croissants and ventured out.

UNESCO chose the old city of Quito as one of the first World Heritage Sites. Today, people consider it to be the best preserved colonial city in the Americas. As a result, I had great expectations from the city. Initially, however, the city disappointed me. The narrow streets had old and pretty buildings on both sides, but these consisted of mostly high walls interrupted by small doors and windows. Even early in the morning cars and people already packed the streets. 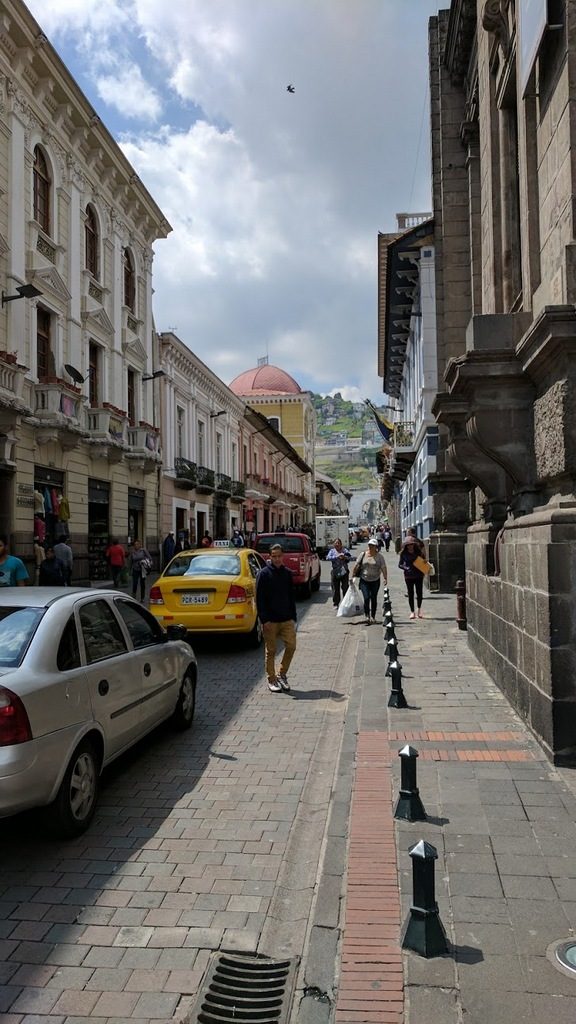 Only once we started visiting some of the numerous churches and museums did I finally understand the city’s secret: the non-distinct, high walls and small doors hide spectacular inner-courtyards and former palaces. Much of the beauty of this city, it turned out, like so much else in life, lies within.

We visited “La Compañia” Church, heavily decorated with  lavish gold-leaf-covered motifs. We then went to a few museums, like the Museo de la Ciudad, housed in a former hospital, which chronicled the city’s daily life throughout the centuries: 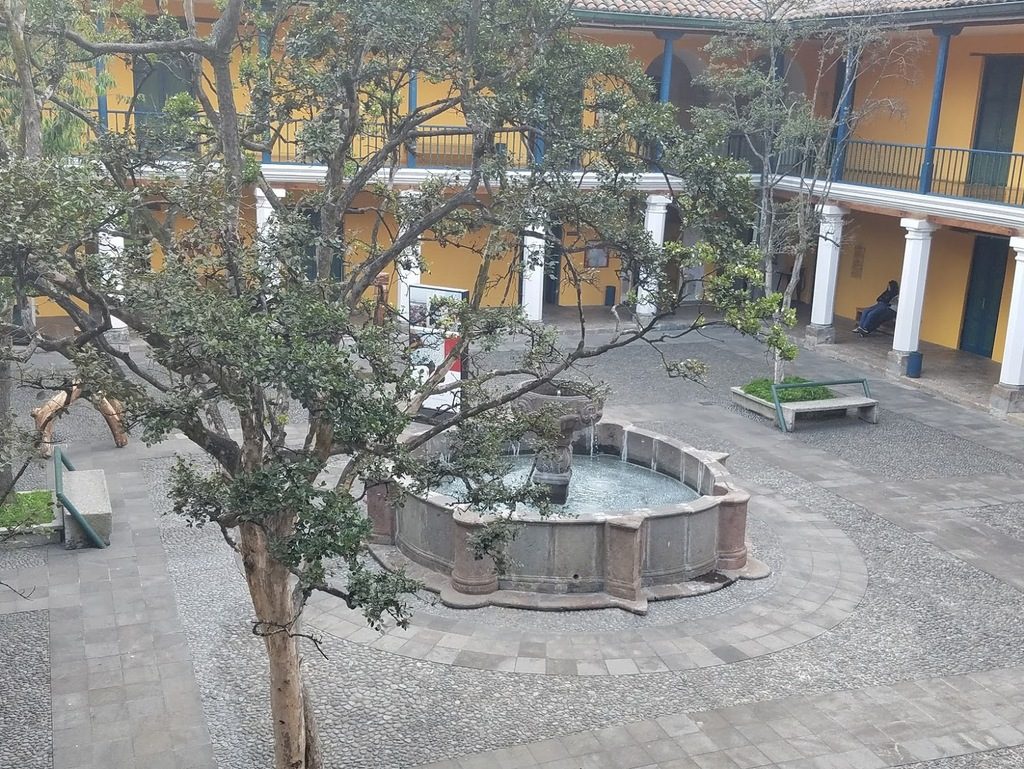 There, we first learned about the complex relations local people have historically had with textiles. The indigenous people, it turned out, were good weavers before the Inca and Spanish conquests. The conquerors, however, forced them into a harsh, cruel weaving-servitude. Thus, the brutality of slavery tinted the art of weaving in people’s minds. 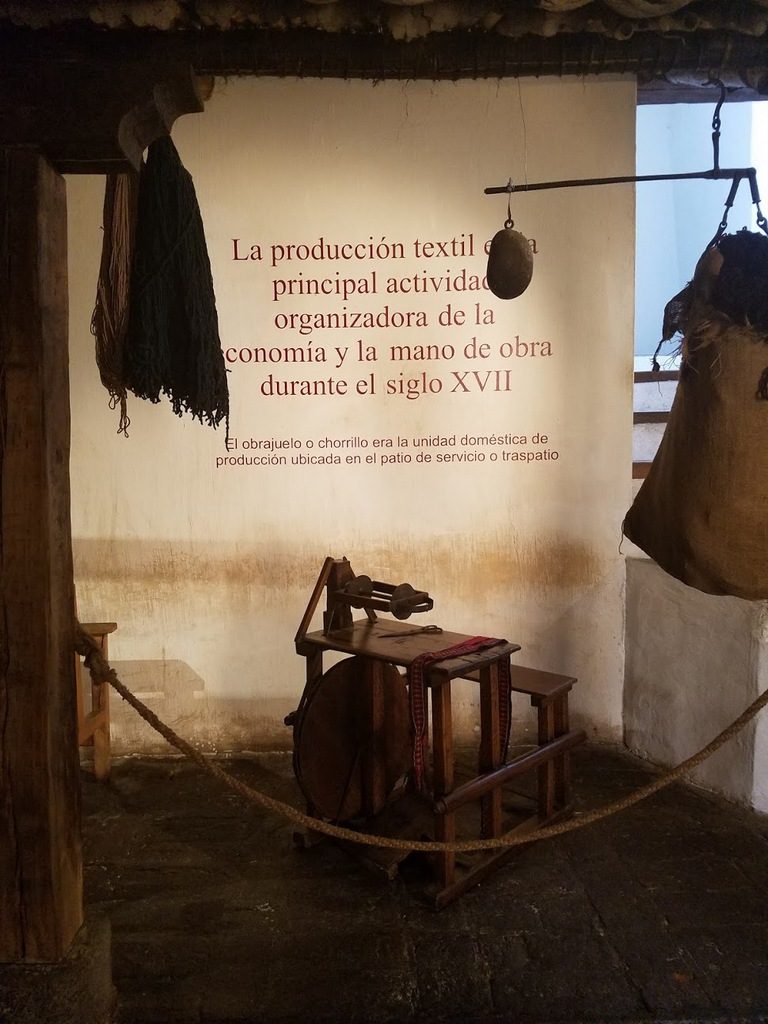 In one of the display cabinets I saw a 500-year-old sling. It looked incredibly modern: 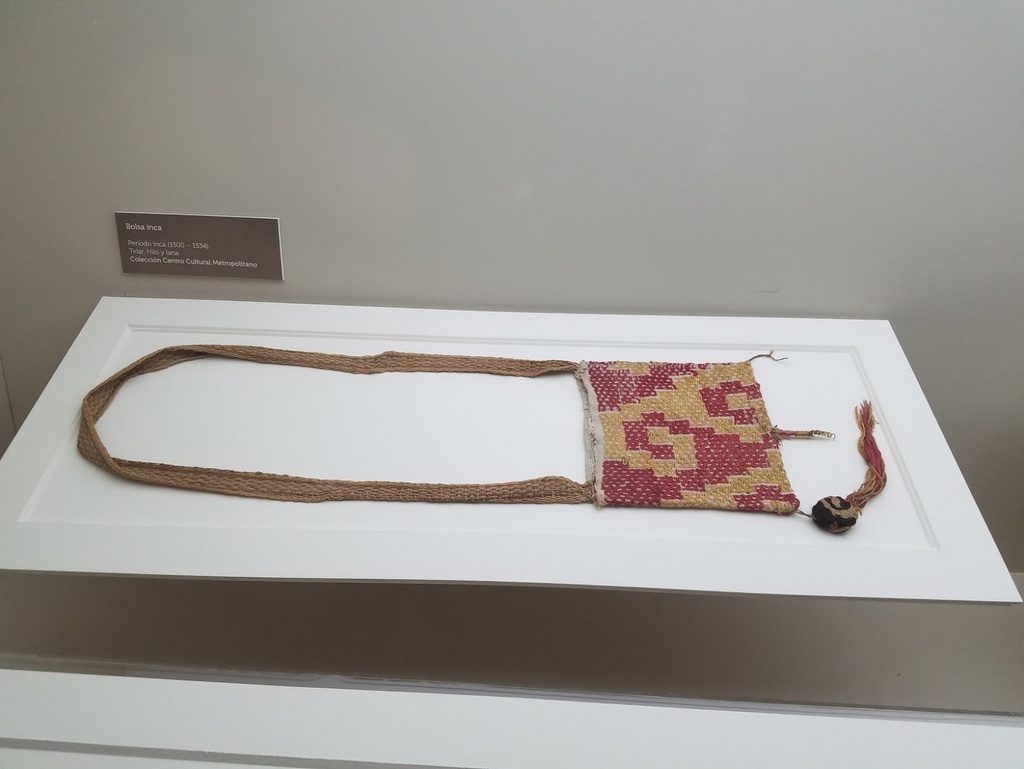 In another museum I was happy to encounter an old sewing/crafts table: 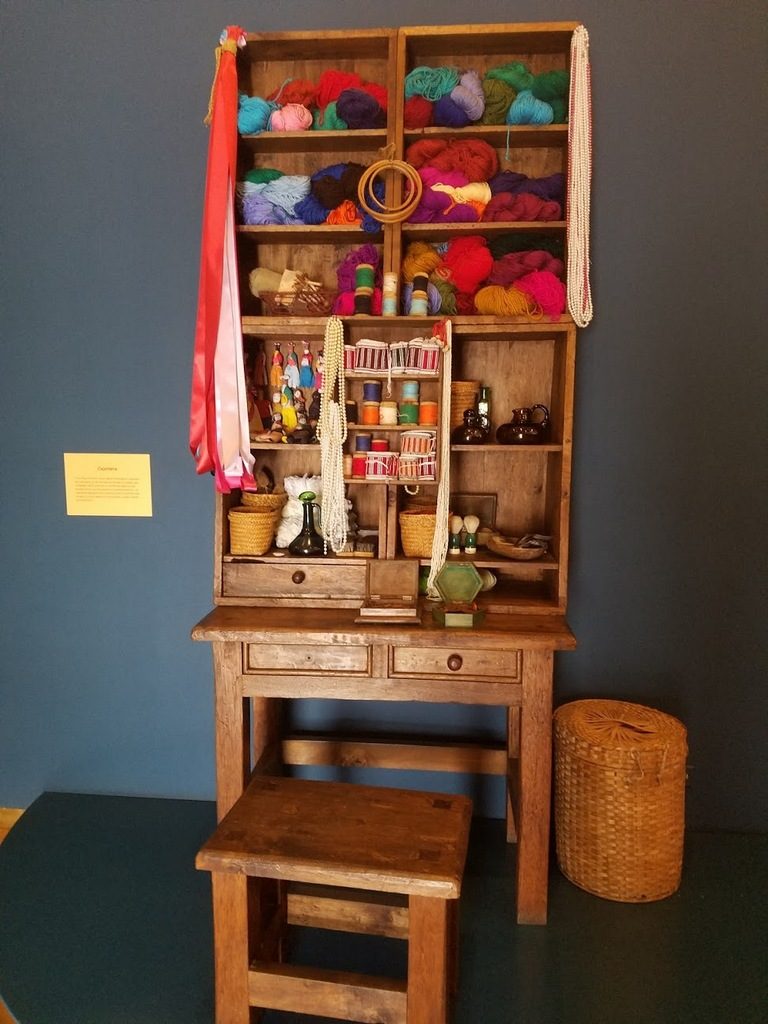 And in the house of Maria Augusta Urrutia–a 19th-century home of a noblewoman now turned museum–I was even more thrilled (and a bit jealous) to find an entire sewing room. The room contained several sewing machines. It was also lavishly decorated (alas, picture-taking was forbidden).

Further wandering brought us to some beautiful streets, impressive architecture, and nice vistas. Not all of the city’s beauty was hidden after all. This, for example, is the Church of St. Francis: 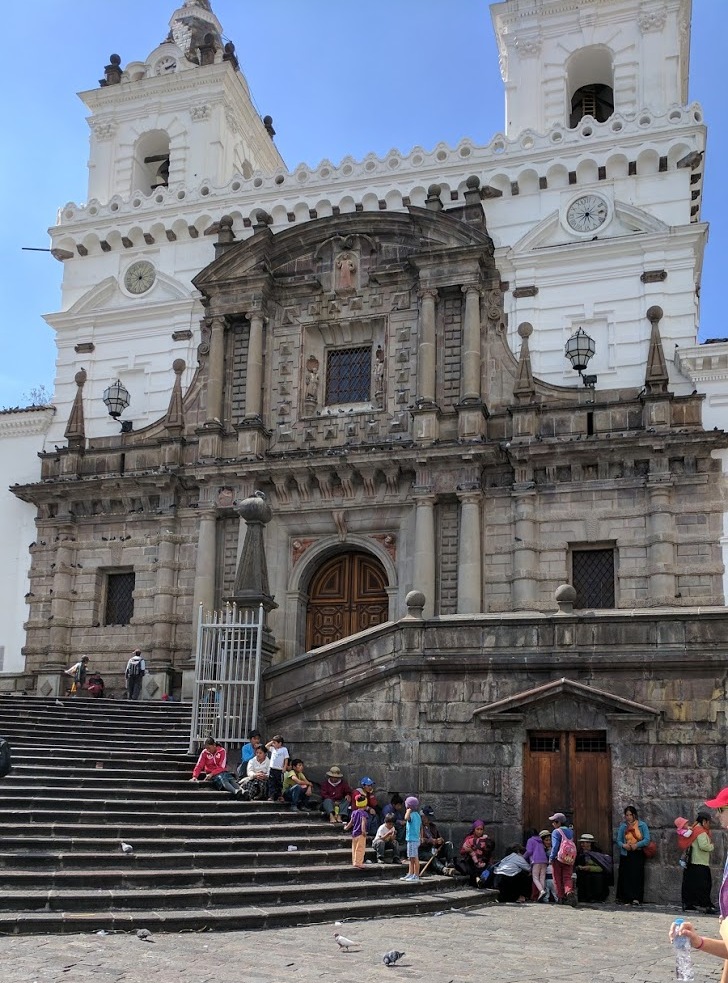 And a street close to it: 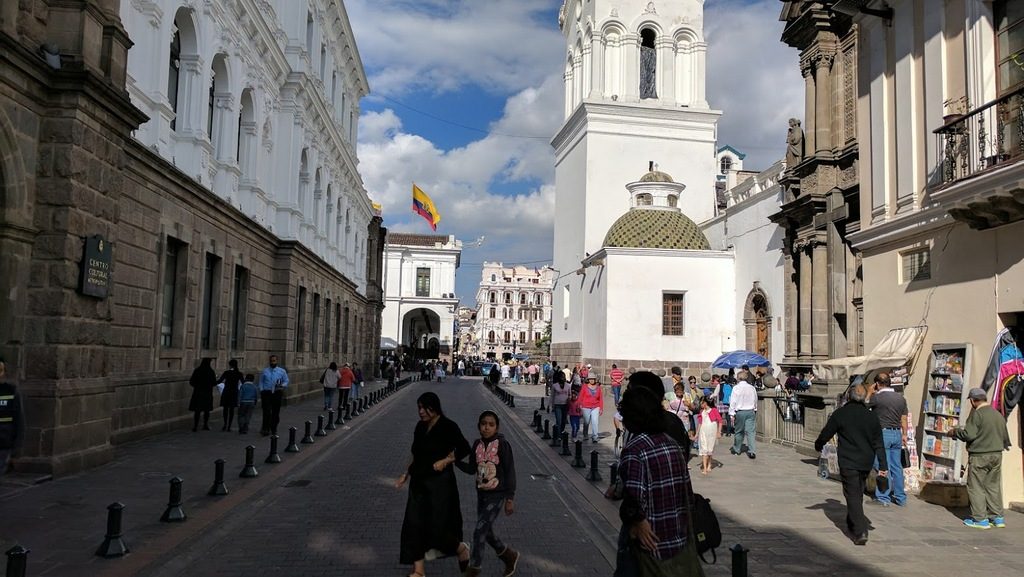 This is a nice view of the monument of the Madonna on El Panecillo hill: 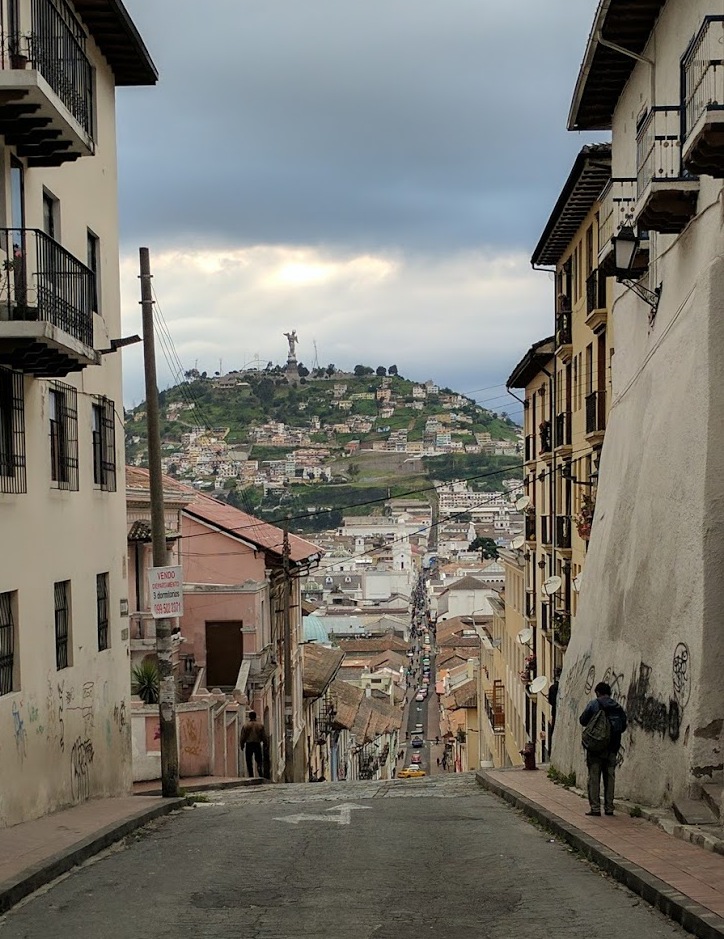 Fabric and yarn stores were spread all over Old Quito. They easily put the humble offering of such stores in my hometown to shame. I was very excited to see them, until I realized that most of their inventory came from China… Still, I took their presence to be an indication to the craftiness of the local population.

Street Art, Graffiti and Other Surprises

When we drove around, I was struck by the abundance of graffiti. It seemed that every flat surface was an irresistible blank canvas for graffiti artists, calligraphers … or maybe just plain vandals? 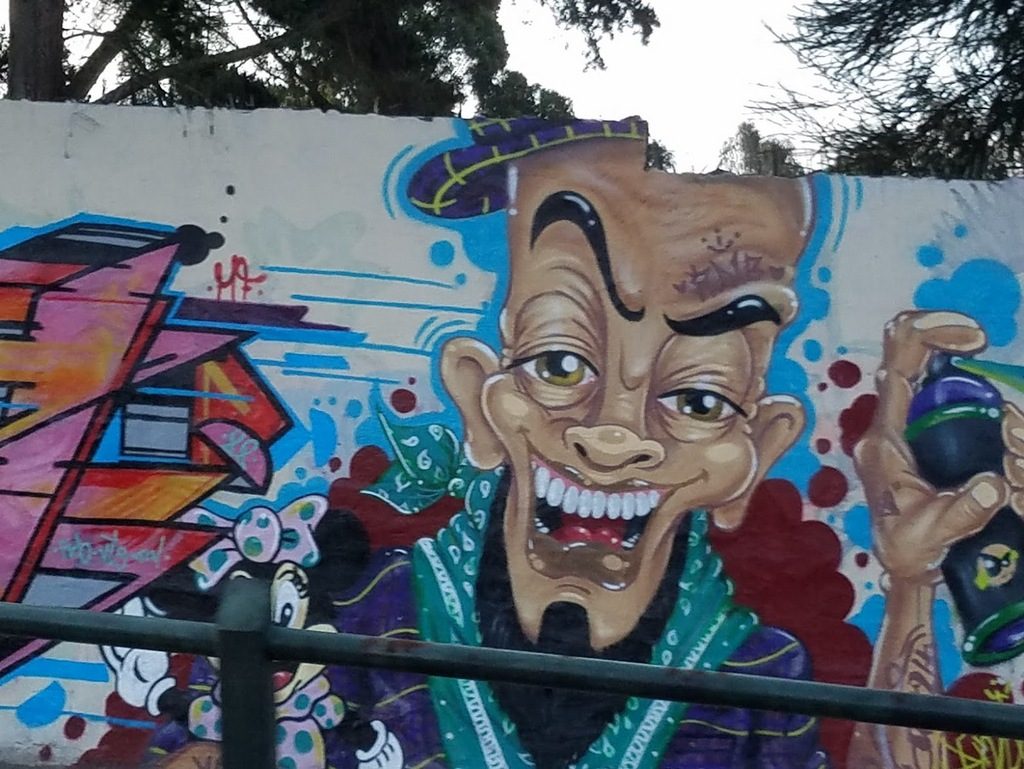 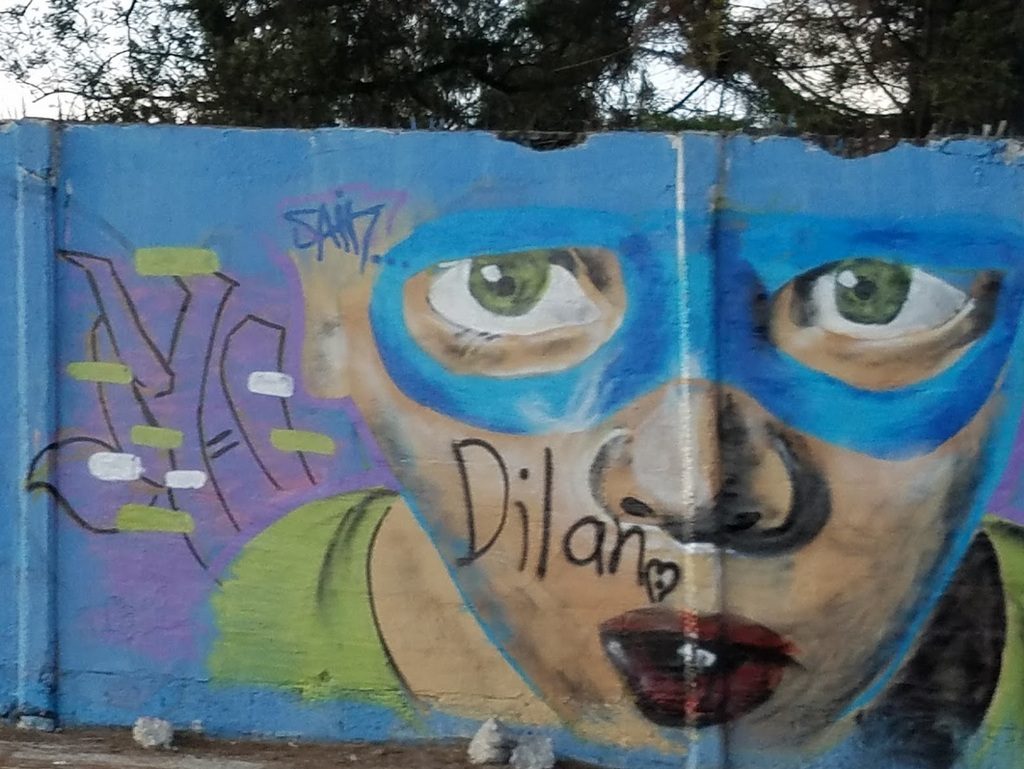 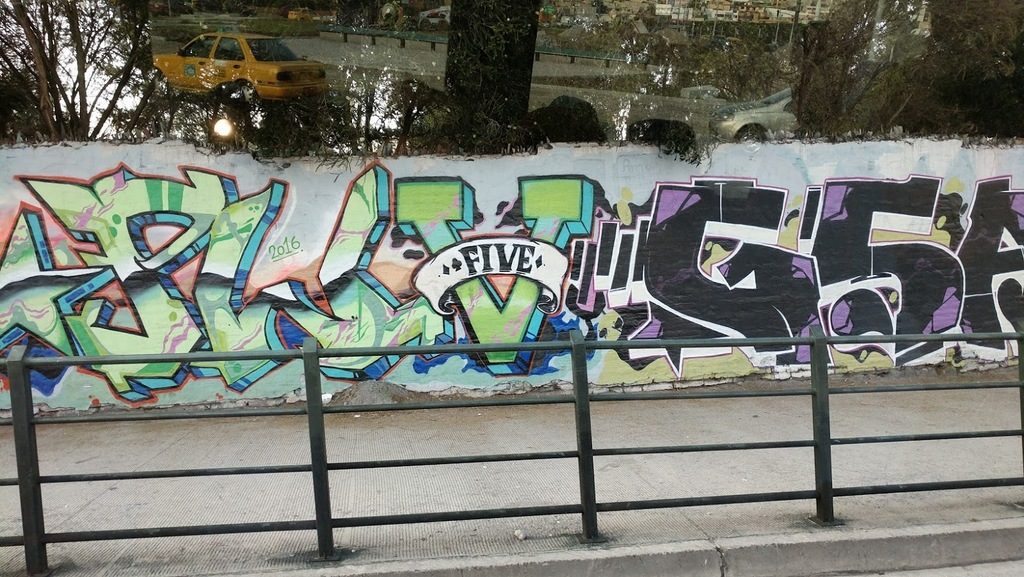 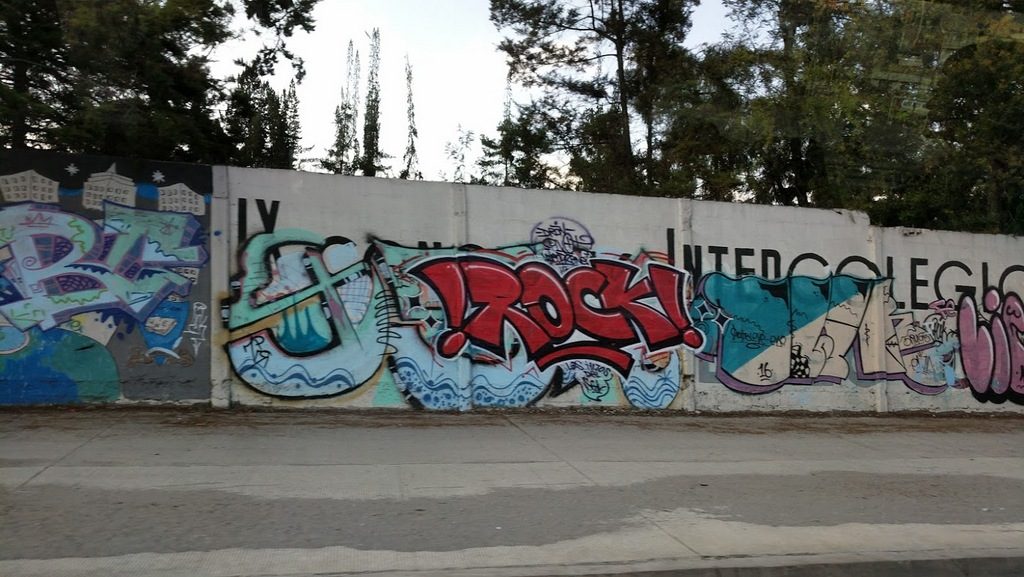 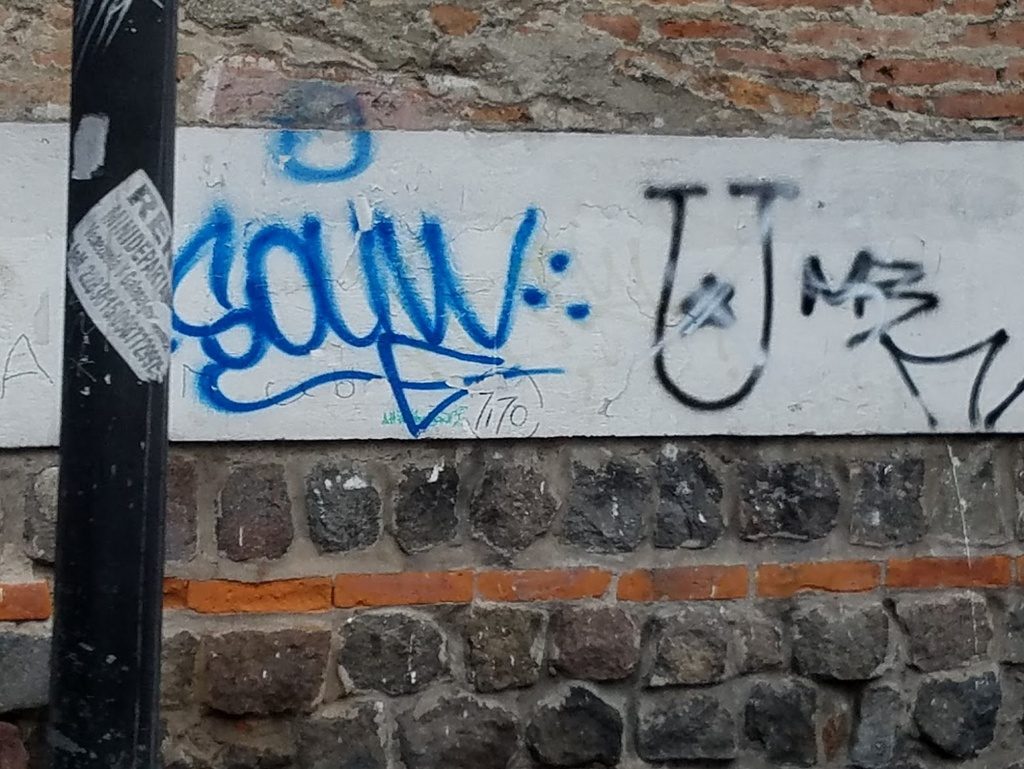 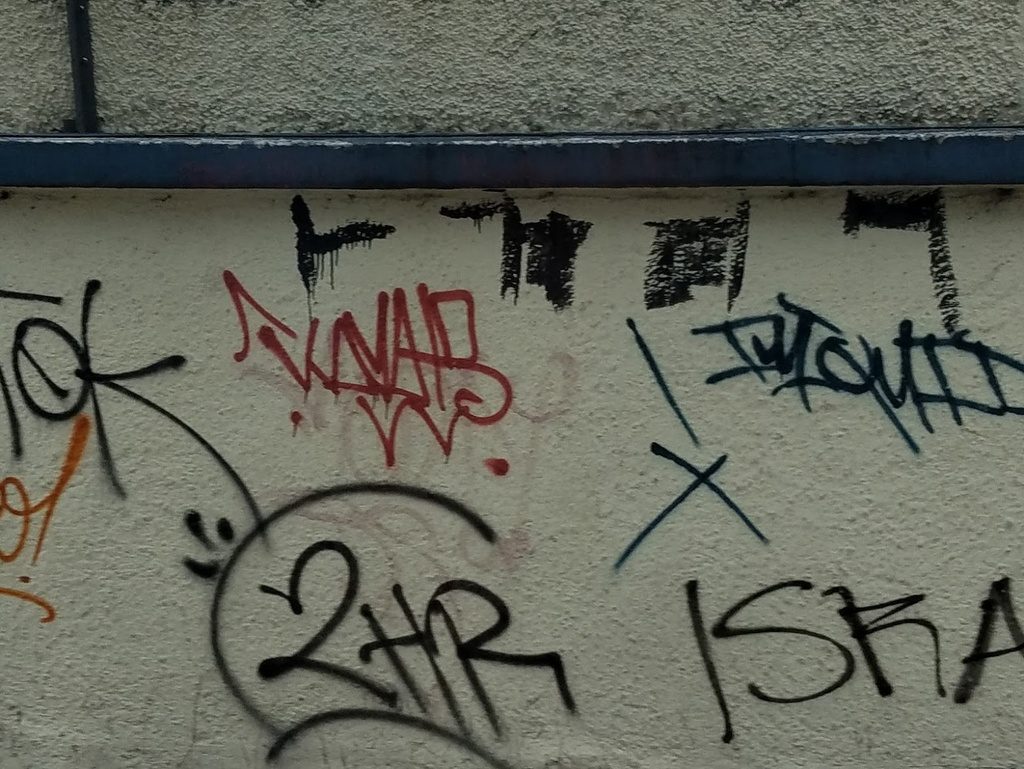 Another surprise were the hundreds of eucalyptus trees, which I did not expect in this part of the world. I later learned that people brought these trees to Ecuador to dry swamps. The eucalyptuses adapted so well, that they soon spread like wildfire, competing for resources with local flora. Apparently they are now a pest.

A fun Quito discovery was the Pacari chocolate store, where we enjoyed a decadent afternoon cup of hot chocolate, and loaded up on a variety of amazing Ecuadorian bars. 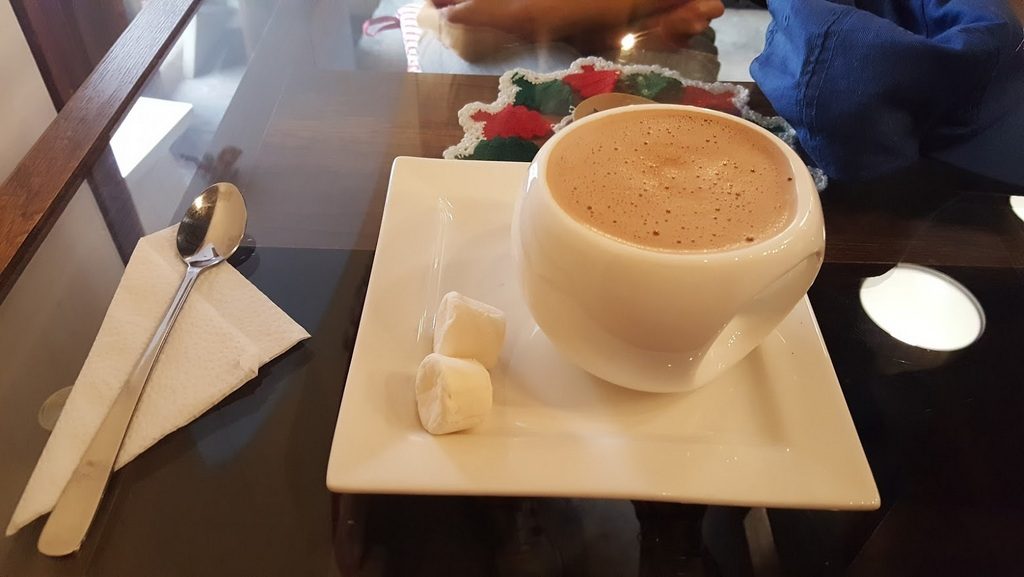 An additional gastronomical revelation was that of Locro de Papa, the tasty Ecuadorian potato soup. We later realized it tastes slightly different in every restaurant, but somehow always hit the spot. This is definitely a dish I plan to adopt and add to my family’s winter-soup rotation. 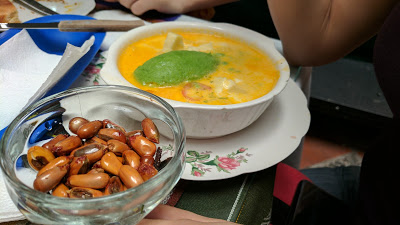 If you are curious to try it, here is a recipe I found online: