What brought us to Ecuador in the first place was my years-long desire to see the Galapagos Islands. After extensive reading and consulting with friends who recently traveled there, we settled on a four-night, five-day cruise to the Southern Islands. We decided to go on the biggest boat possible, the Galapagos Legend. We hoped that its size would reduce the chance of sea sickness (it did!), and figured that a big boat might offer more activities for the kids (did that, too :-)).

Despite thinking I knew what to expect, the surprises started coming while we were still on the plane from Quito to San Cristobal:

The first unexpected occurrence was an announcement by the flight crew that they will spray us with disinfectant. Apparently, this is part of an attempt to protect the islands from invasive pathogens. In the end, they sprayed only the overhead compartments, but it still felt a bit weird. I don’t recall ever being disinfected on a plane before!

When we started landing, all I could see from the window was the blue of the ocean, getting closer, and closer, and closer yet… Right when I felt the first pang of panic, the wheels mercifully touched down on land. The plane managed to stop shortly before the runway ended, a very short distance from where the ocean started again…

We deplaned on San Cristobal, which–after a ten-hour trip from San Francisco to Quito, followed by an additional four-hour flight from Quito–felt like the end of the world. Yet, when we arrived at the airport my son was thrilled to find … Pokemons on the Island! They were all over the place, it later turned out, to his great joy and my annoyance…

On the short bus-ride from the airport to the pier I imagined myself walking leisurely onto the boat, only to find … a rubber zodiac waiting with a big pile of life vests. 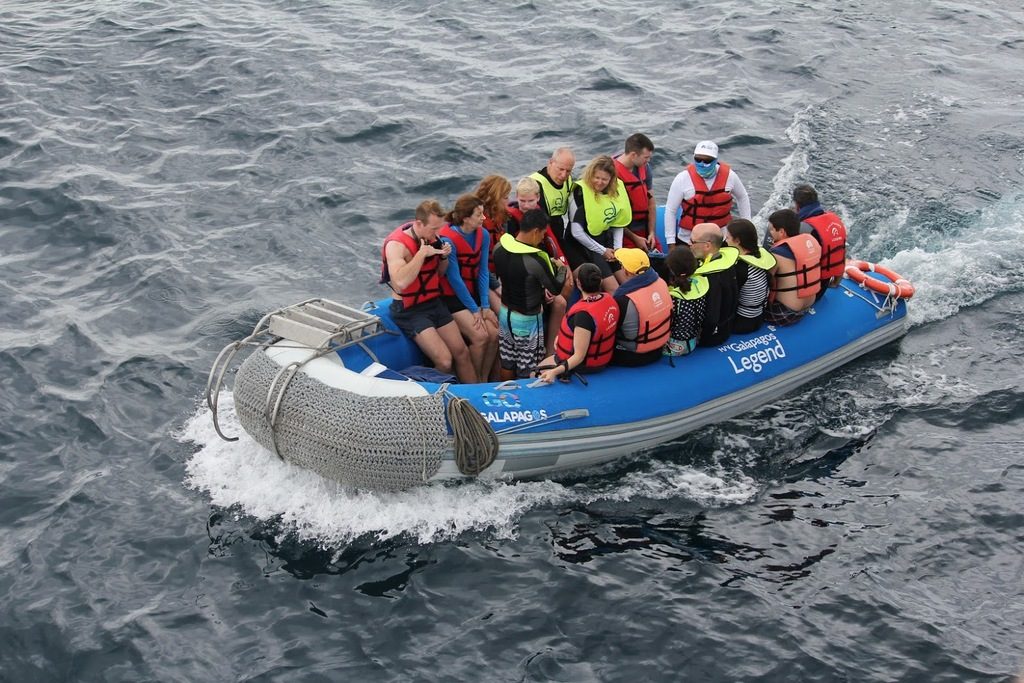 A few exciting minutes of holding tight passed before the mothership came to view. Whew! But then I wondered whether I would have to climb up that flimsy-looking rope-ladder… 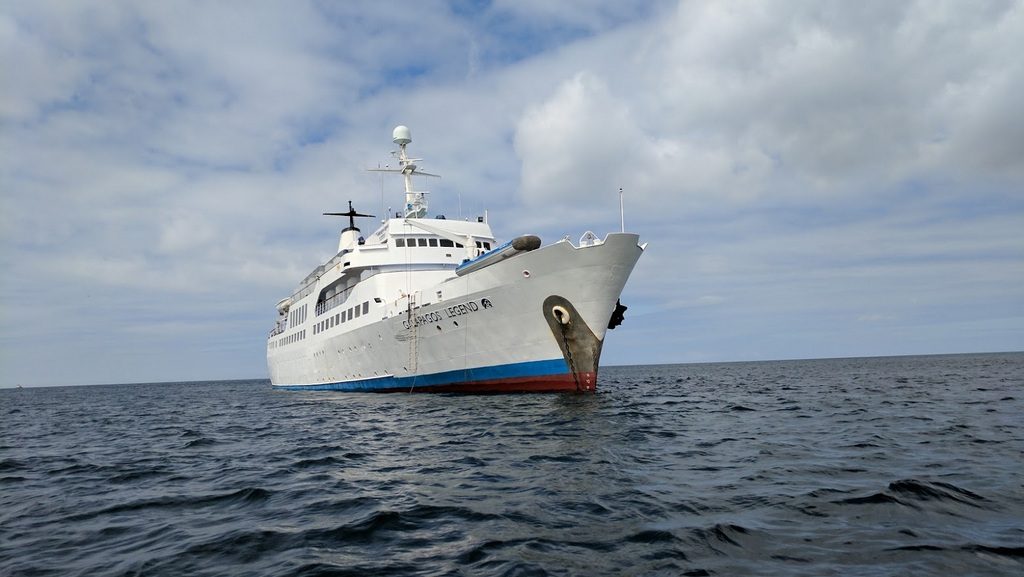 Luckily for me, I didn’t have to. The other side of the boat revealed a real door, with more stable metal steps :-): 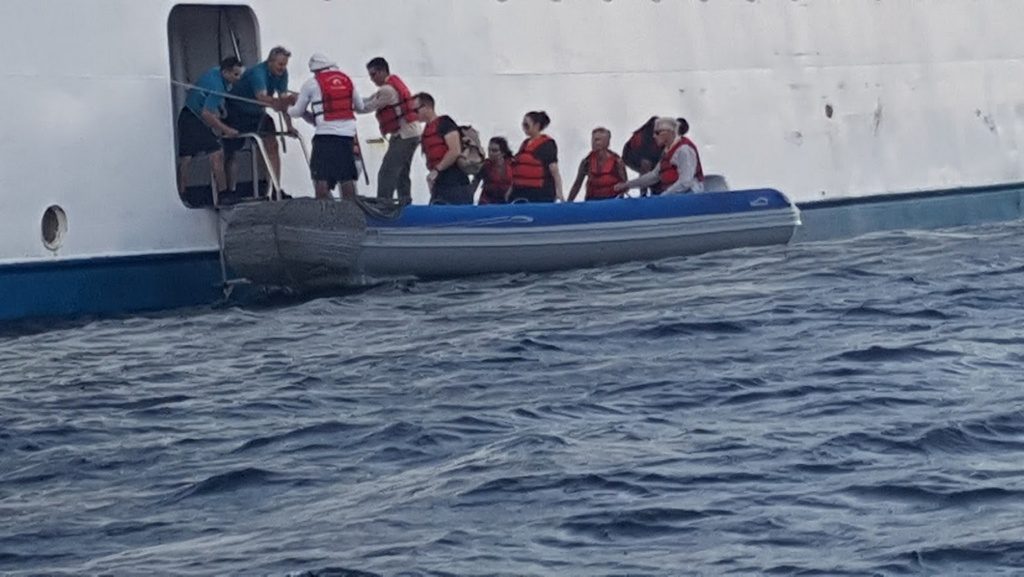 By the end of the trip. of course, I was a pro at getting on and off zodiacs. Needless to say, I became an expert in doing both dry and wet shore landings (the later of which called for getting off the boat into shallow water).

On our tour of San Cristobal I wondered what happened to the trees. Somehow they all looked rather dead: 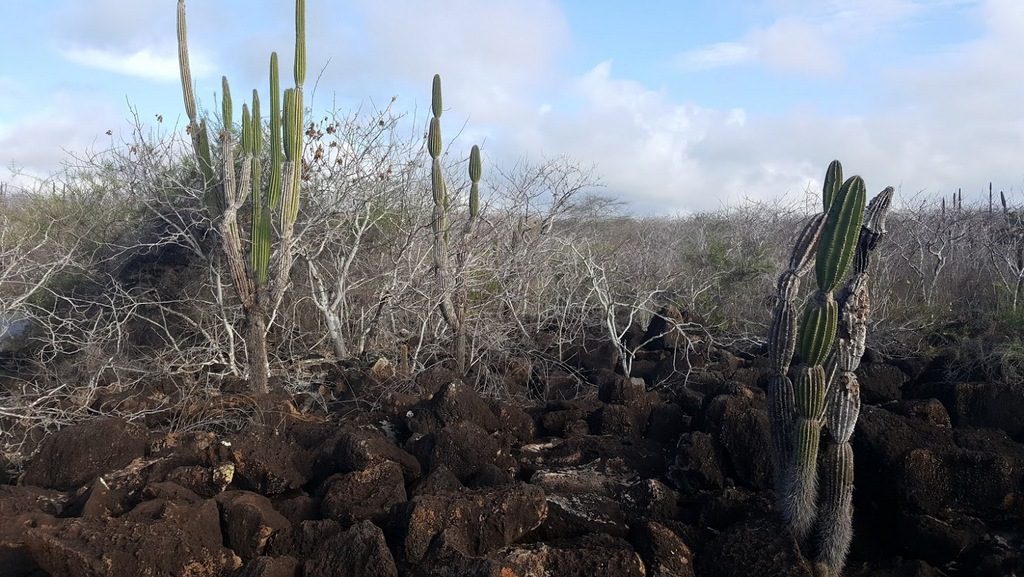 To my relief it turned out they weren’t. They were very much alive, our guide assured us, just conserving water while waiting for the rains. Our guide promised that In a couple of weeks they will be covered in green foliage.

On San Cristobal we saw our first sea lion: 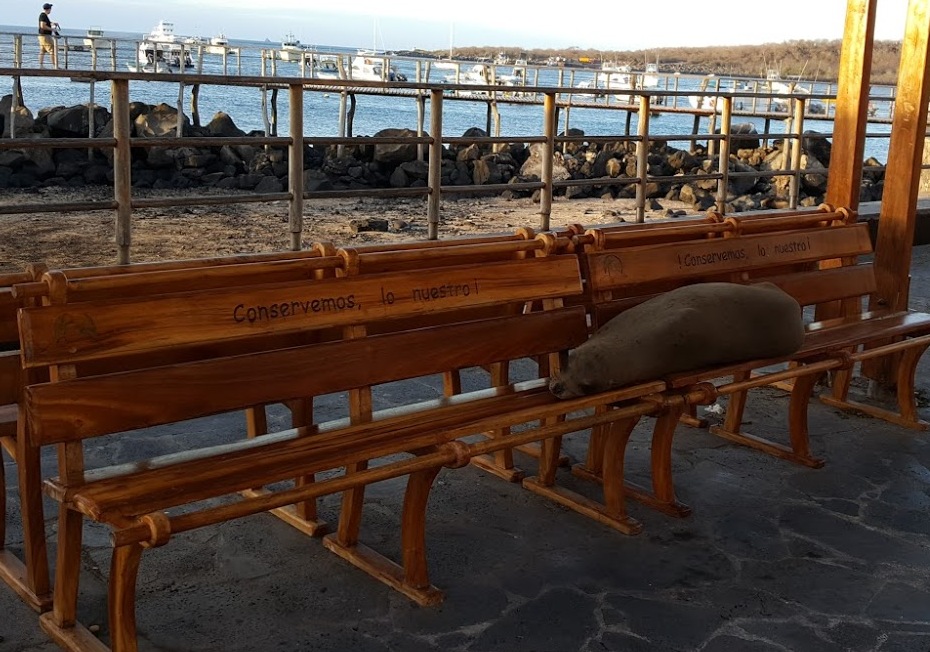 As well as our first crabs: 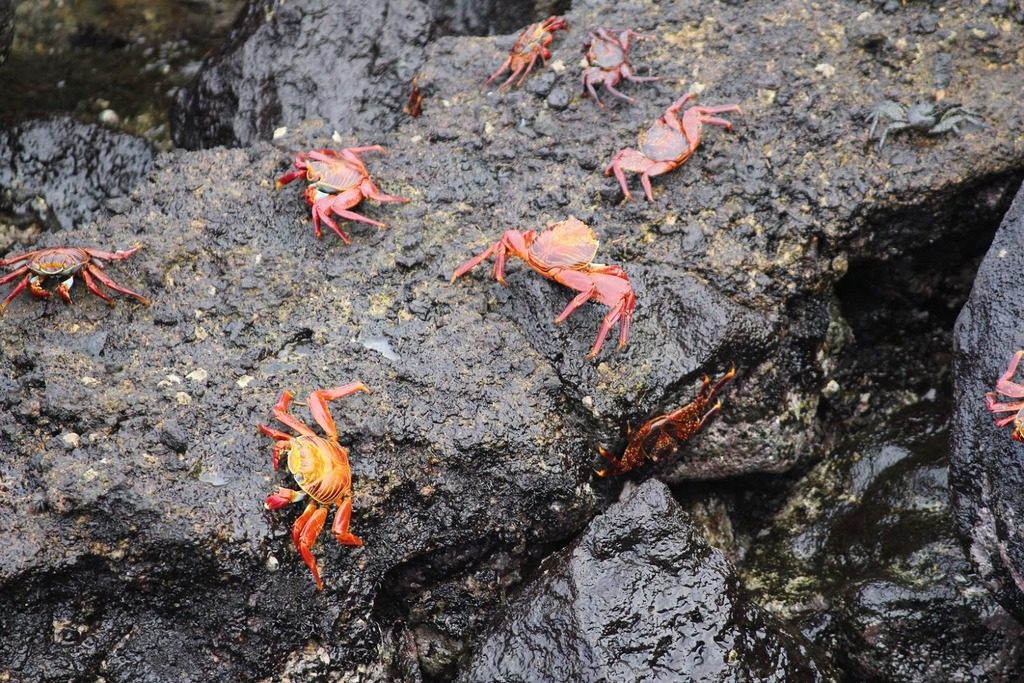 However, it was only when we sailed to the uninhabited island Espanola, that we started to feel the real magic of the Galapagos. There was the magic of life itself, in the form of both flora and fauna, clinging desperately to a harsh, inhospitable environment. It was truly amazing to see how much life a flat, infertile volcanic island can support.

Hundreds of sea lions of all ages were sprawled everywhere, the only representatives of the mammalian family. The kids enjoyed to see their playful interactions: 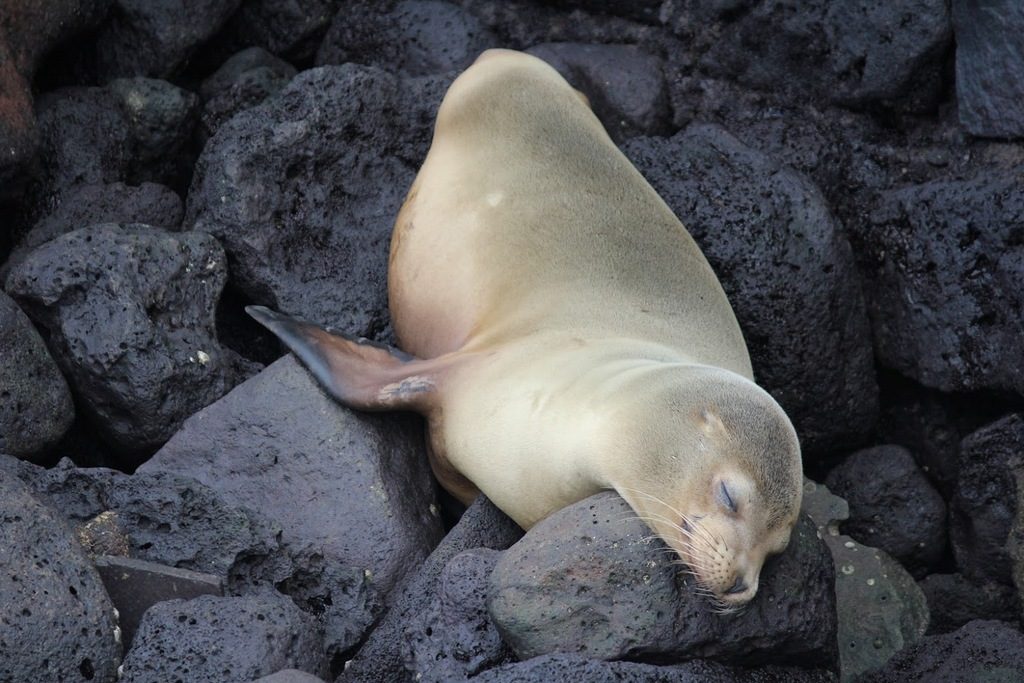 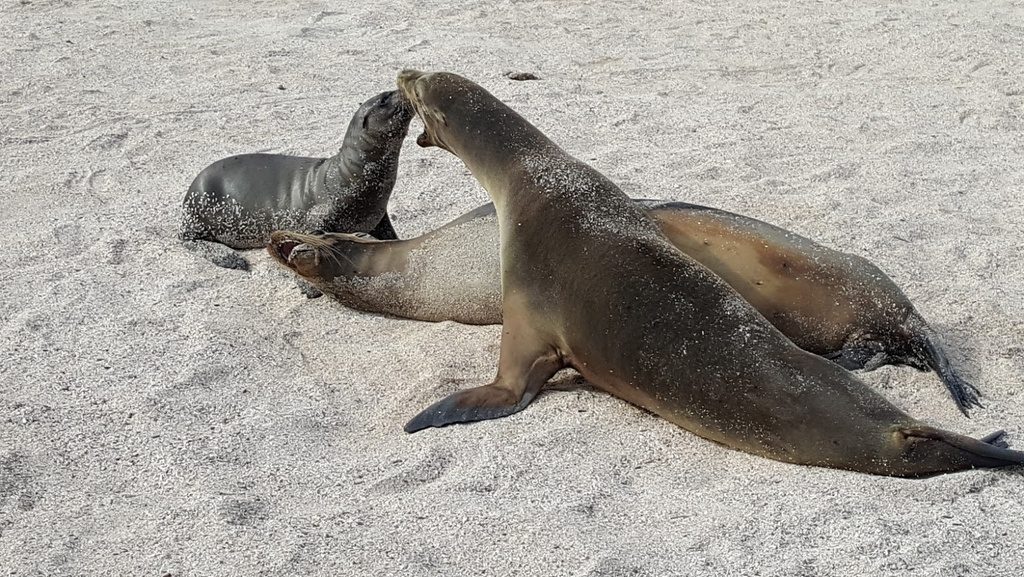 Reptiles were represented by small Lava Lizards with perfect camouflage: 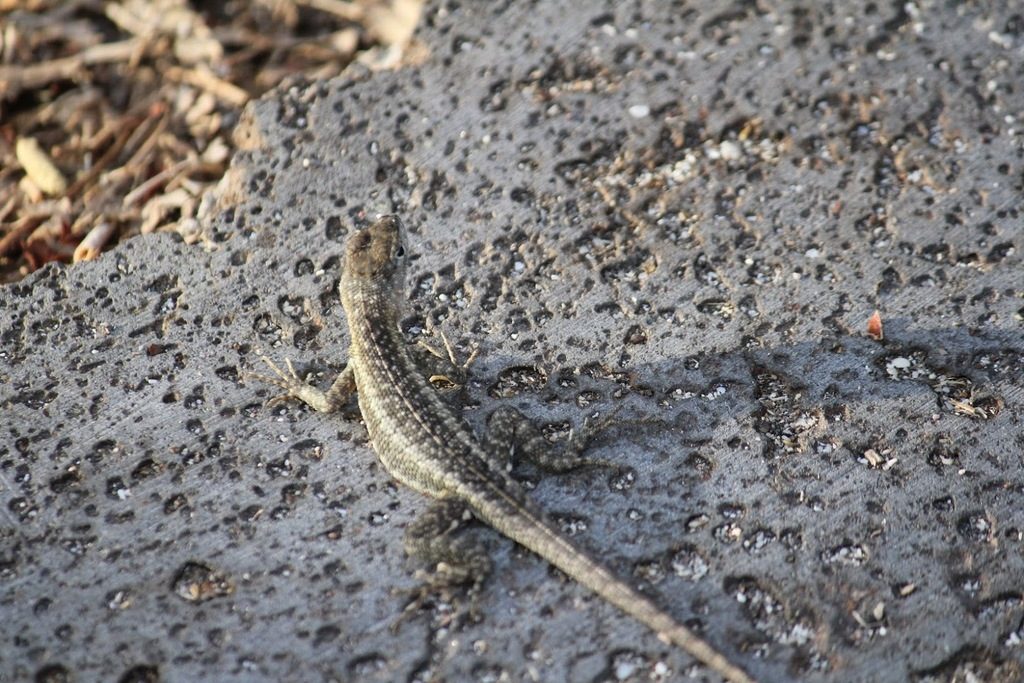 By the much bigger Marine iguanas: 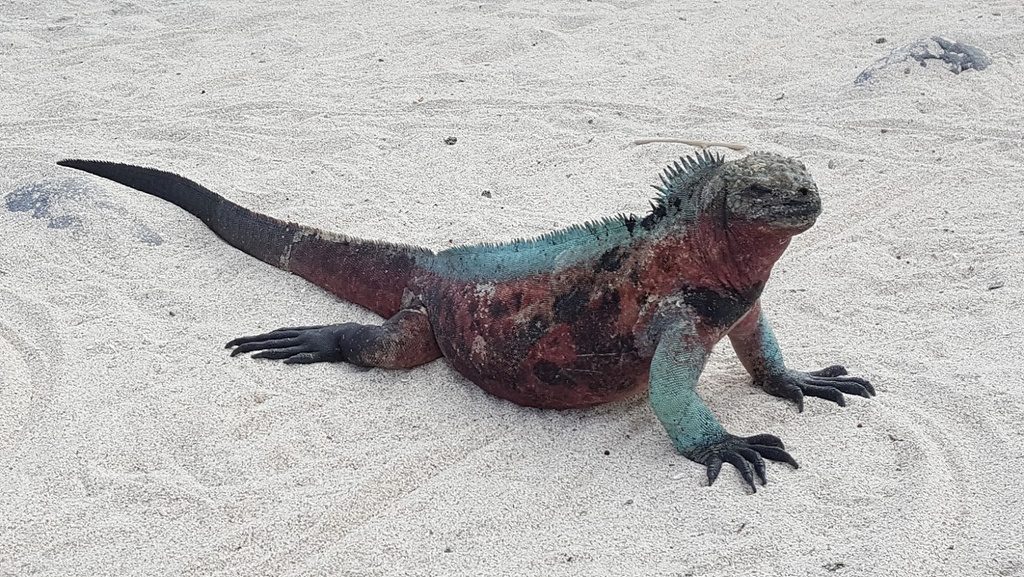 And, in the ocean, by sea turtles: 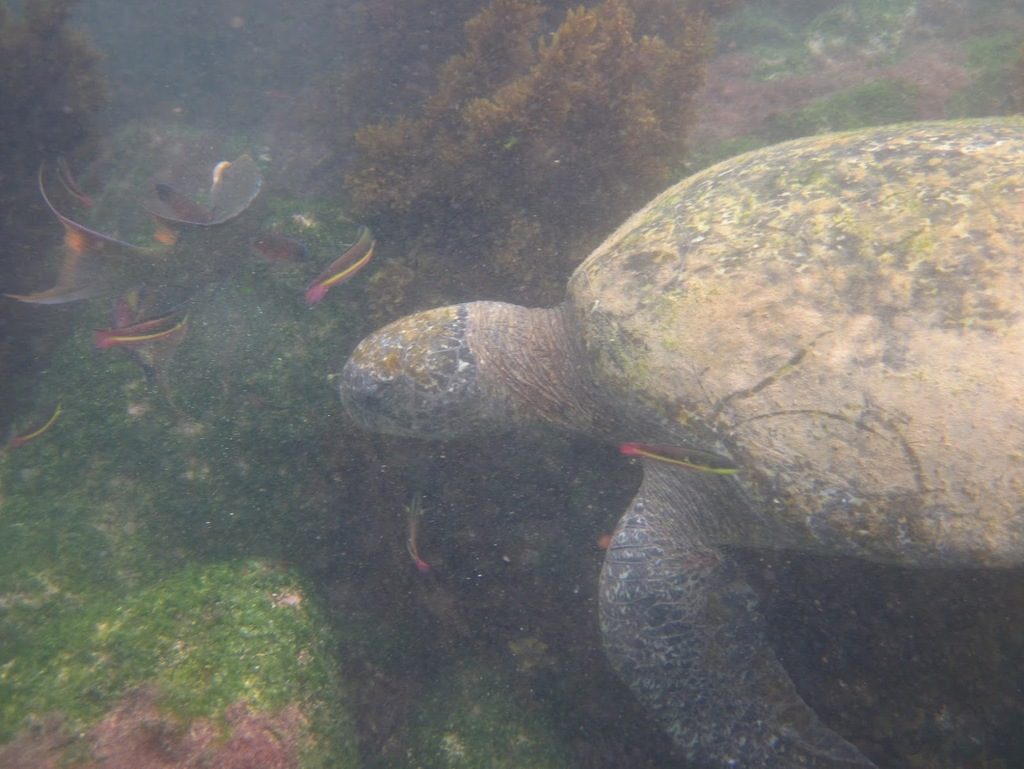 However, the majority of the Galapagos inhabitants are of the bird family. We saw seabirds: 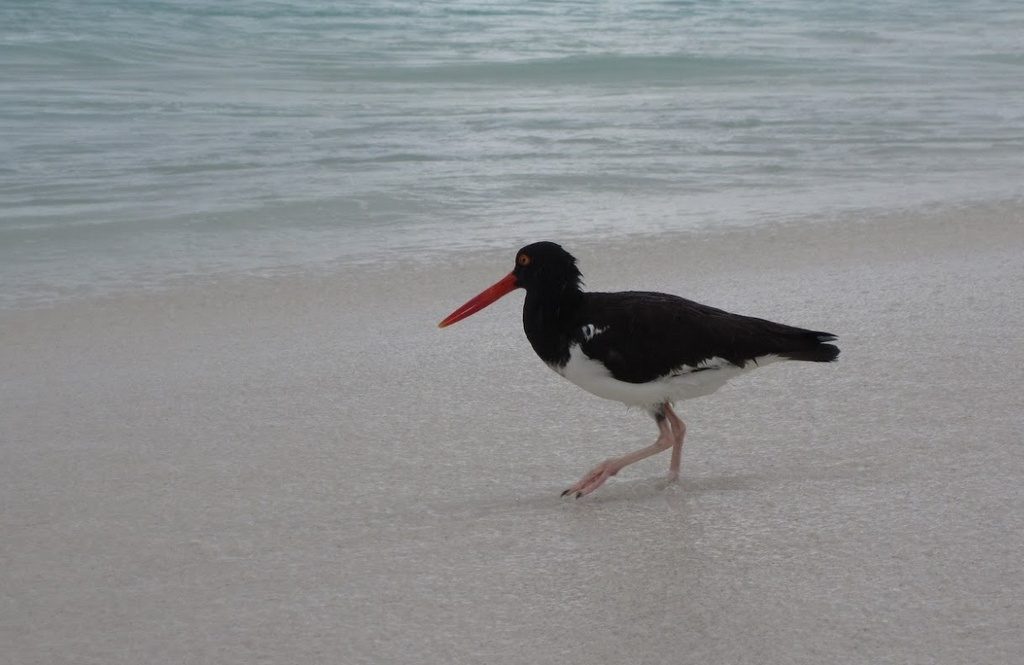 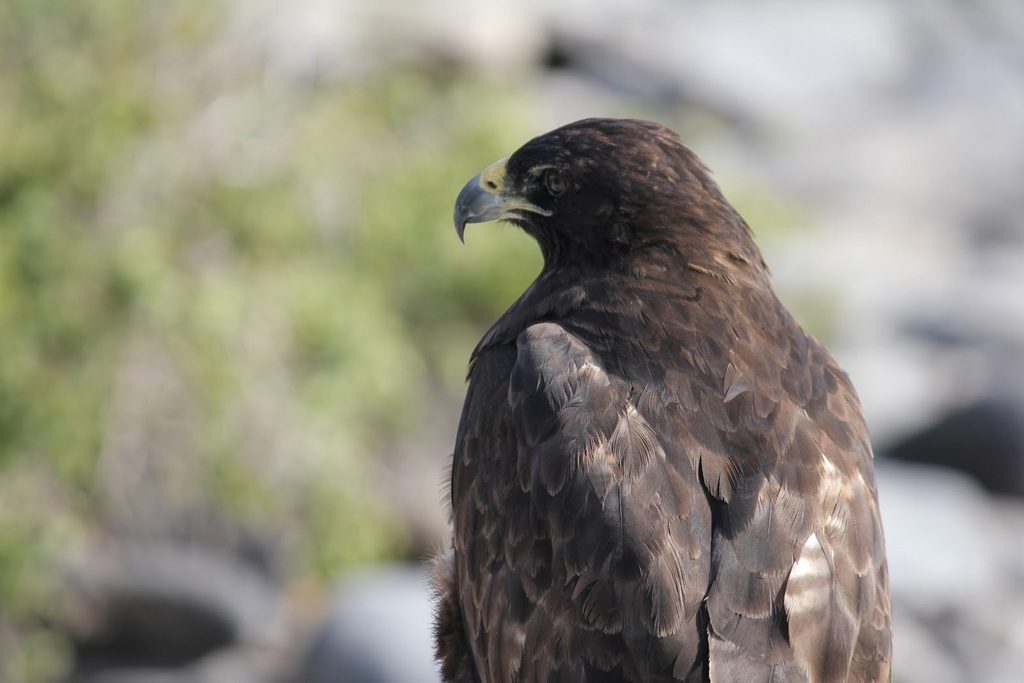 Nazca Boobies, some with chicks: 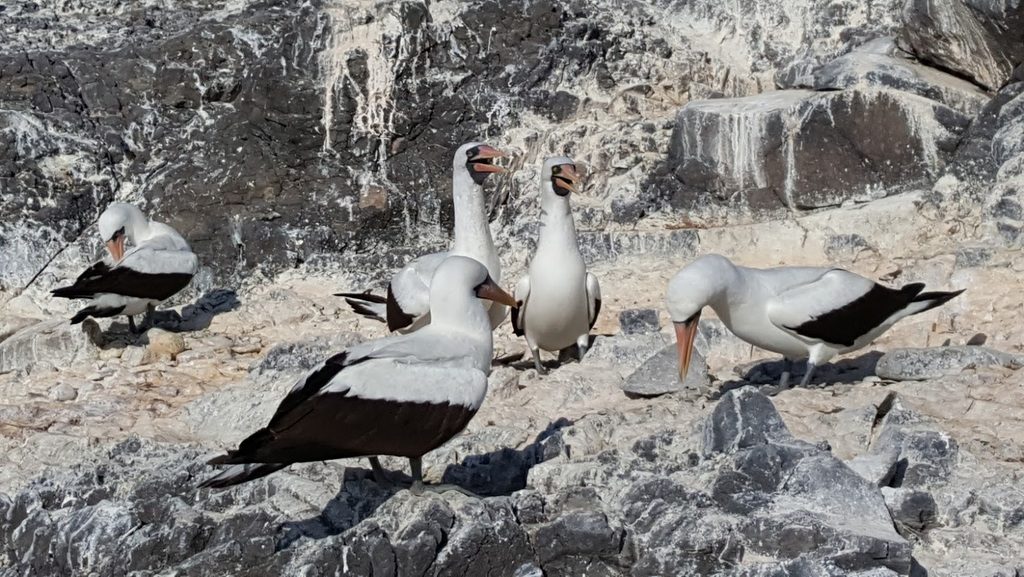 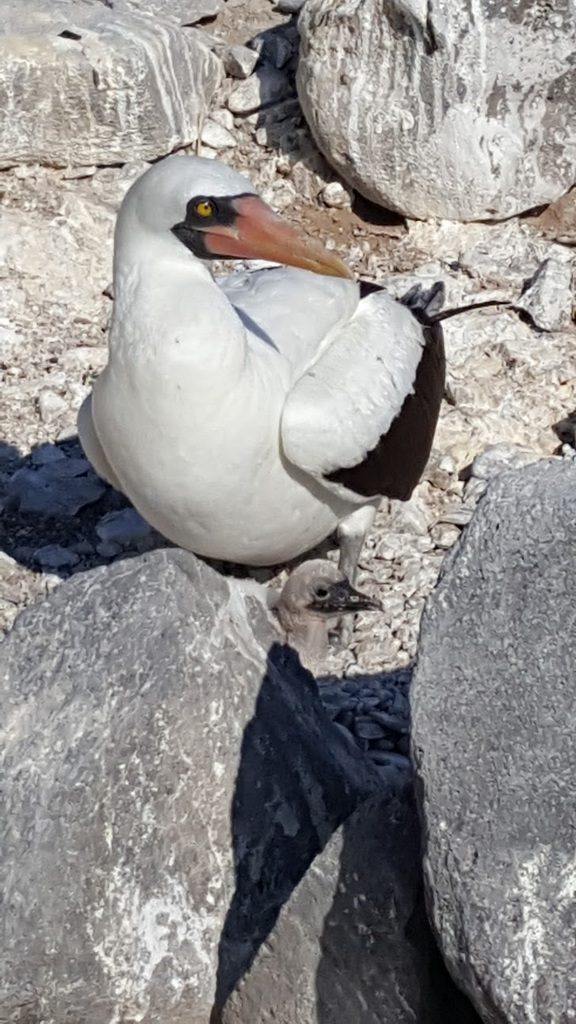 And also albatrosses, a few of which were engaged in their lengthy courting dance: 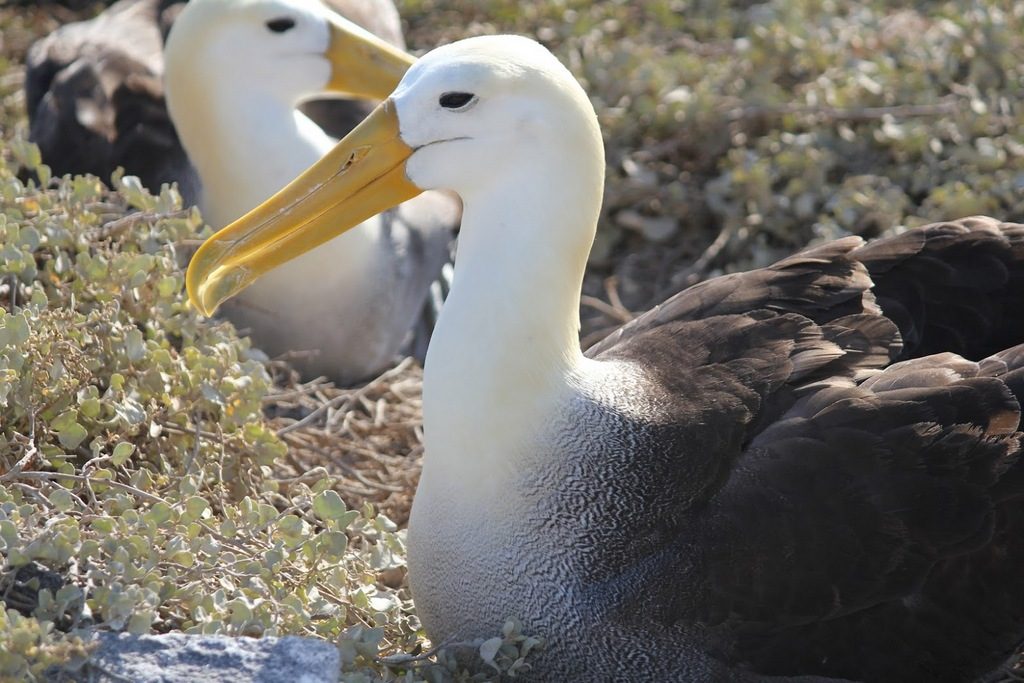 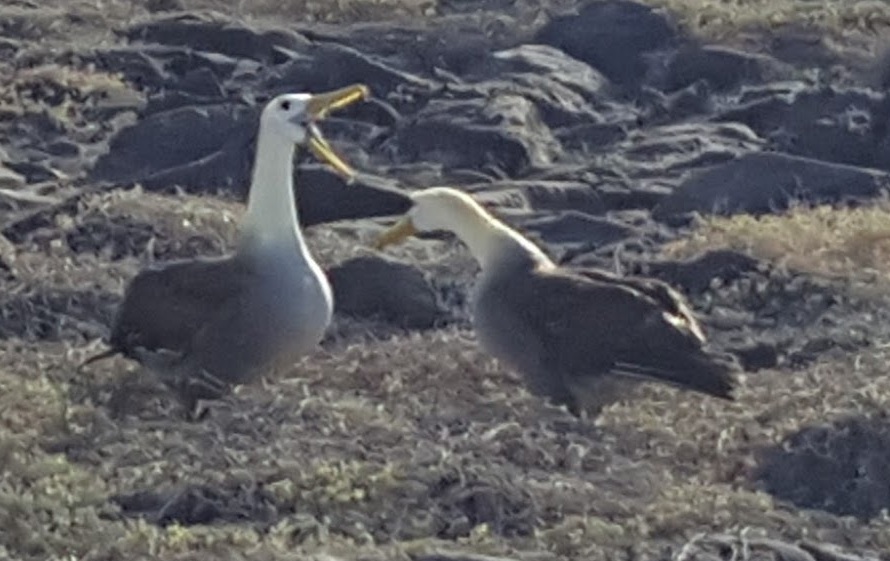 We also met a fly catcher: 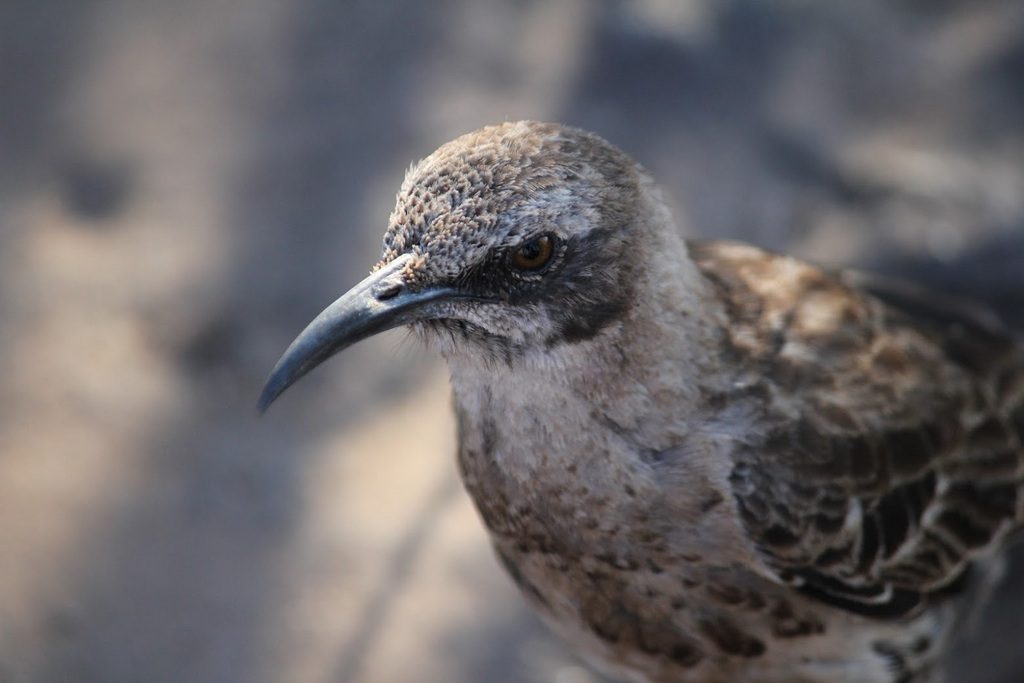 And a beautiful little finch: 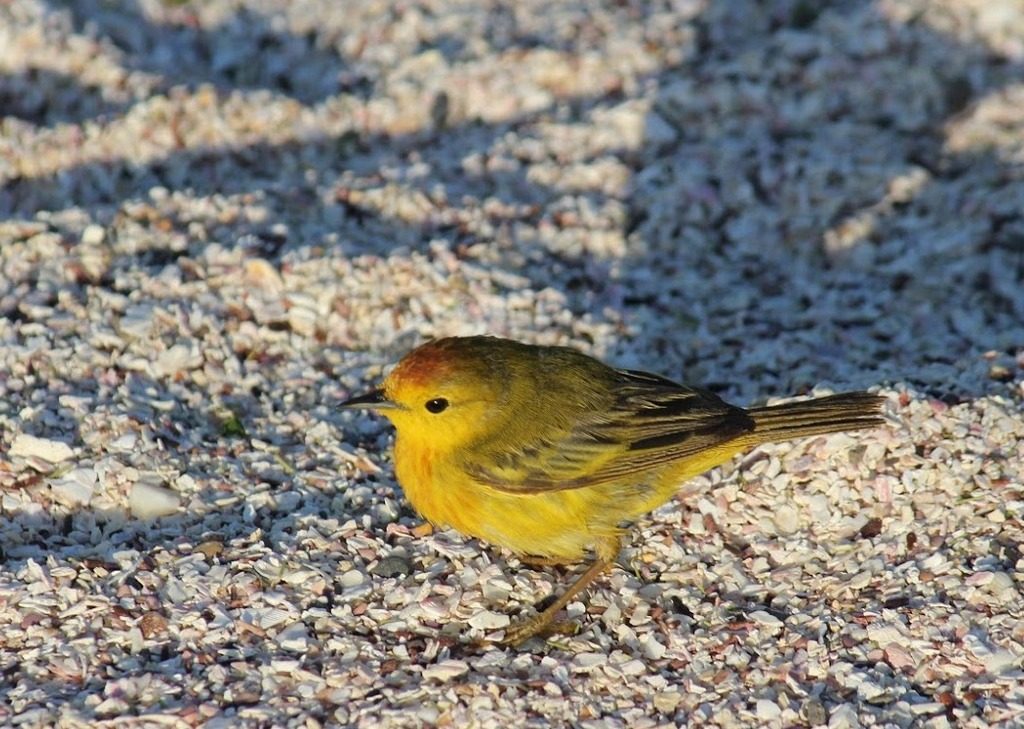 There was also a powerful magic that comes from being very close to wildlife. We were not used to wild animals that are not at the least afraid of humans. The park rangers told us to stay a couple of meters away from the animals. However, the animals, it turned out, were not aware of that rule. They seemed just as curious about us as we were about them. Perhaps they have never seen anything like my Galapagos hair due: 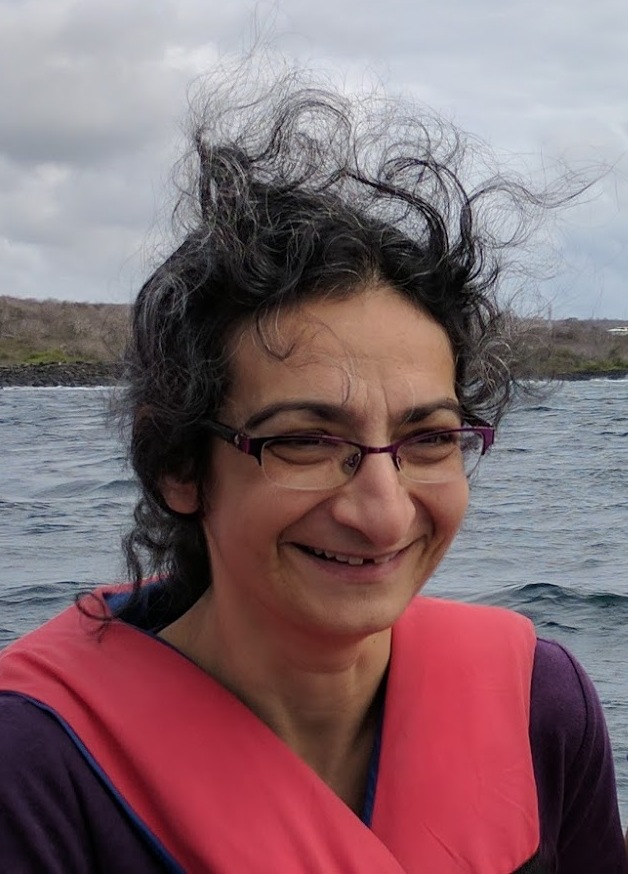 Then there was, of course, the magic of life adaptability. The realization of this struck Darwin when he first visited the islands almost two hundred years ago. It was his visit to the Galapagos Islands that probed him to come up with his evolution theory. To us, this adaptability became even more apparent after visiting several of the islands.

Finally, the last kind of magic came from the openly laid-out fact that death is very much a part of life. Carcasses were visible everywhere. They were as much a part of the place as the live animals were. Furthermore, they integrated back into the environment by the weather, other animals and by decomposition, thus making a contribution to the cycle of life: 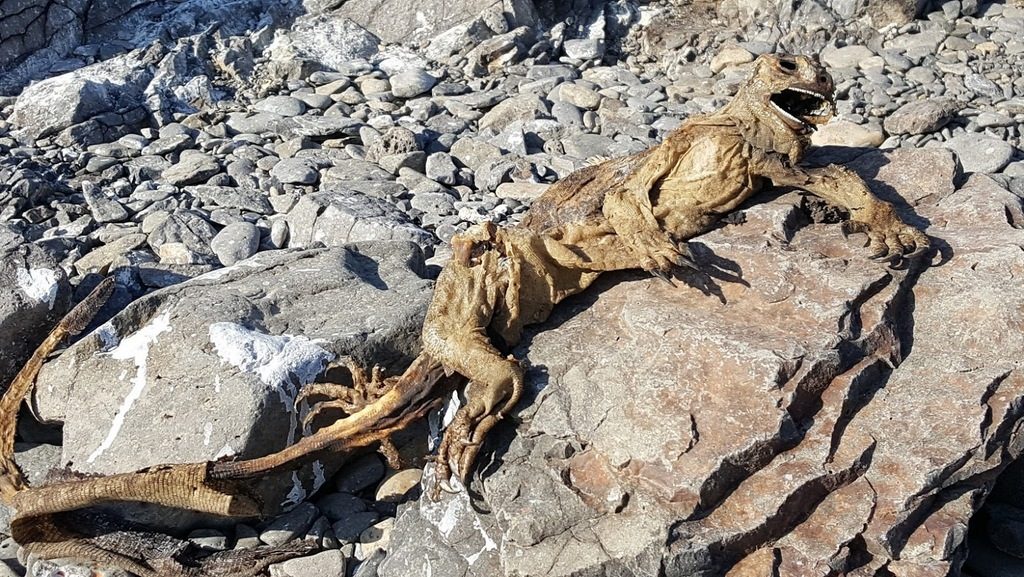 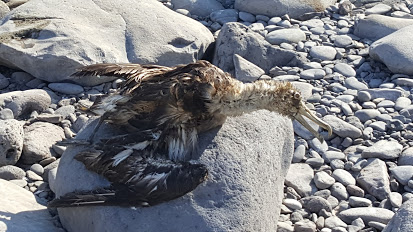 The next day, on the island of Floreana, we learned about the history of the first crazy German settlers and the mystery surrounding them. There, we were super excited to see our first Blue-footed Boobie: 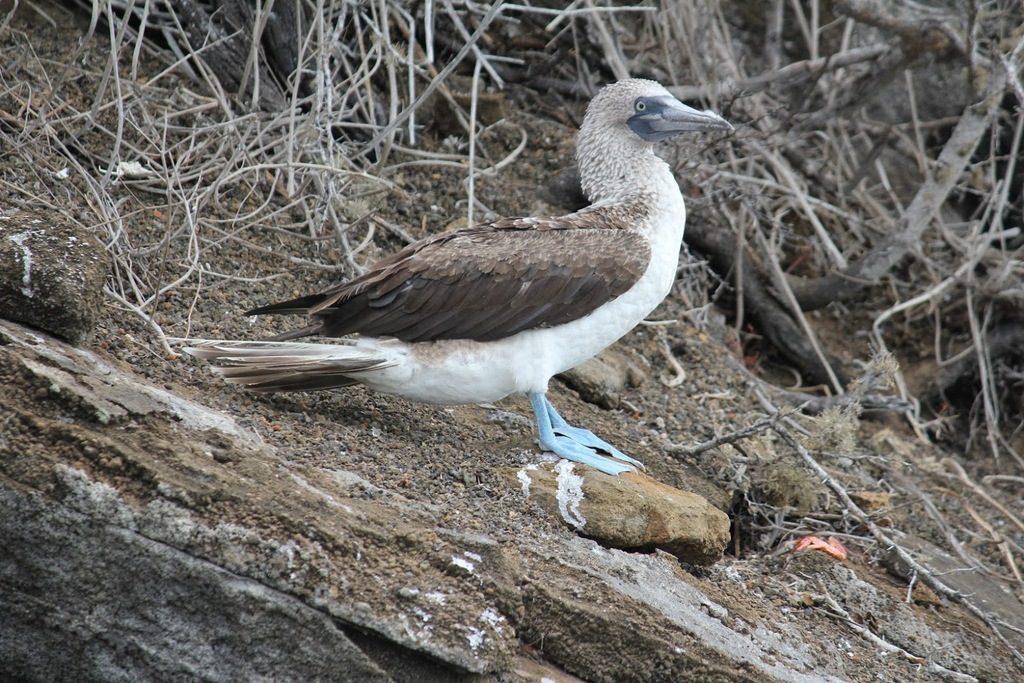 We also saw a few flamingos from afar: 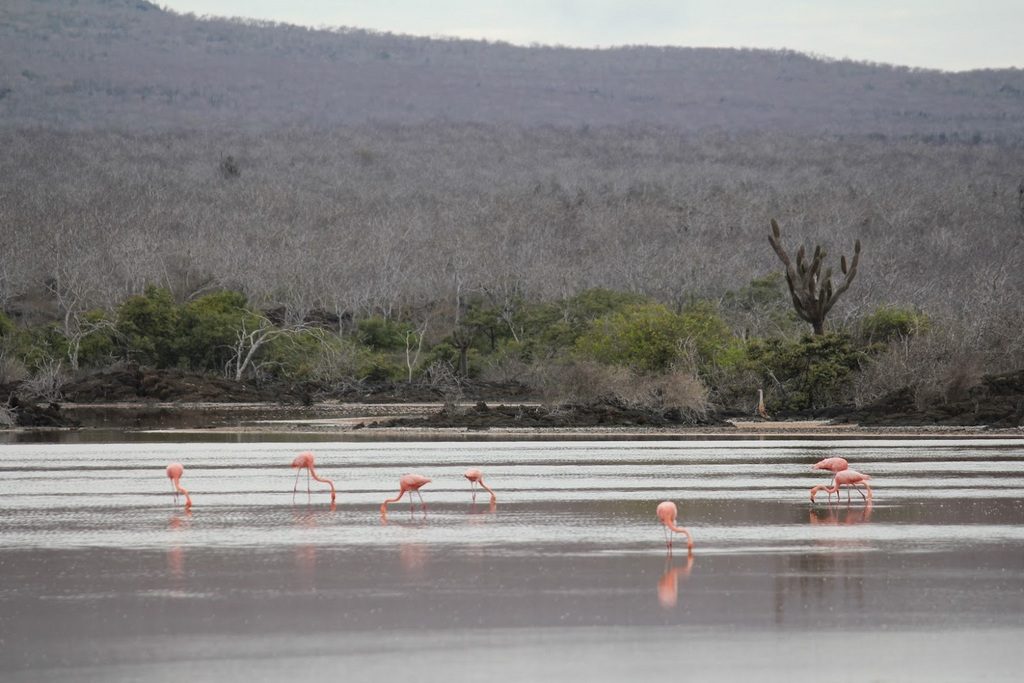 Before we left the island we made sure to deposit postcards in the local “post office.” This “post office,” a wine barrel where people put letters, was established by the first Western visitors to Floreana. According to tradition, visitors go through the piles of letters, and pick the ones address to people living close to them. Once home, they are expected to contact the addressees, and deliver the letters in person. It could take a few days for a letter to leave the island, or many years… Only time will tell if our postcards will ever arrive: 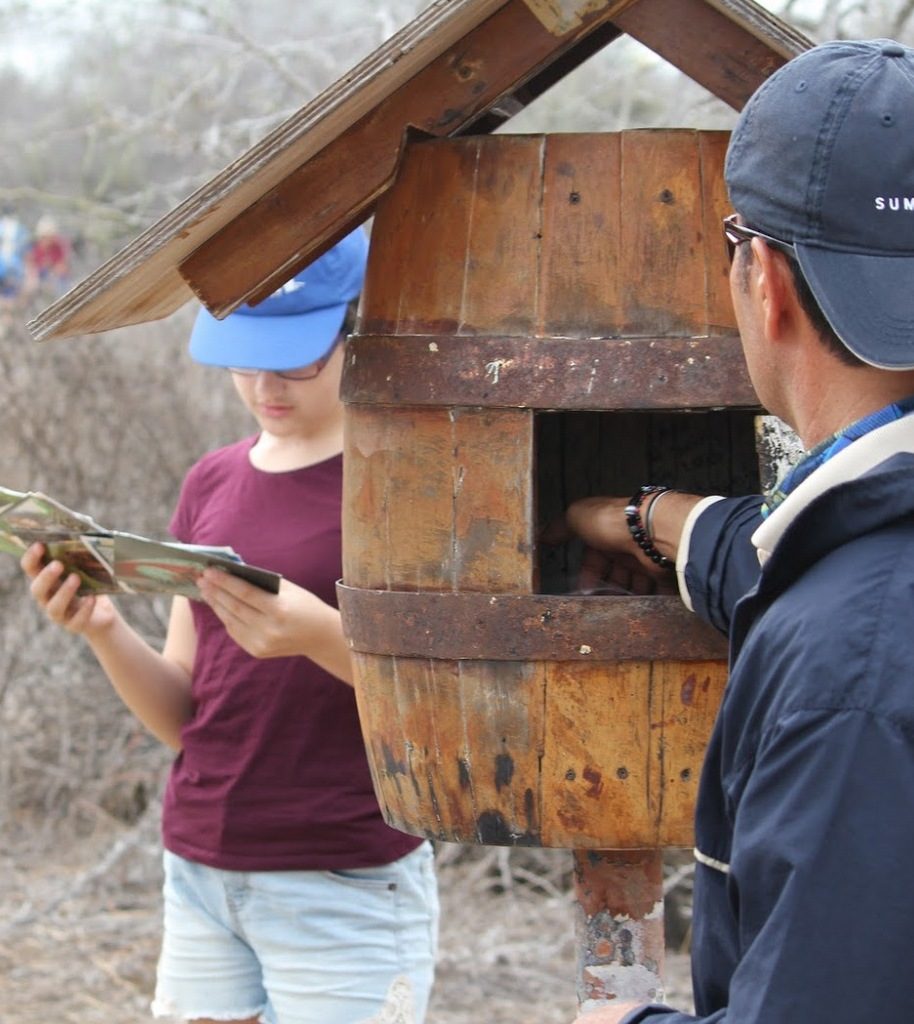 On Santa Cruz Island, the least-wild of them all, we saw the famed giant Galapagos land tortoises. Before Western sailors arrived in the Galapagos Islands, distinct kinds of tortoises inhabited each of the islands. Sadly, early sailors collected so many for food, that some became extinct: 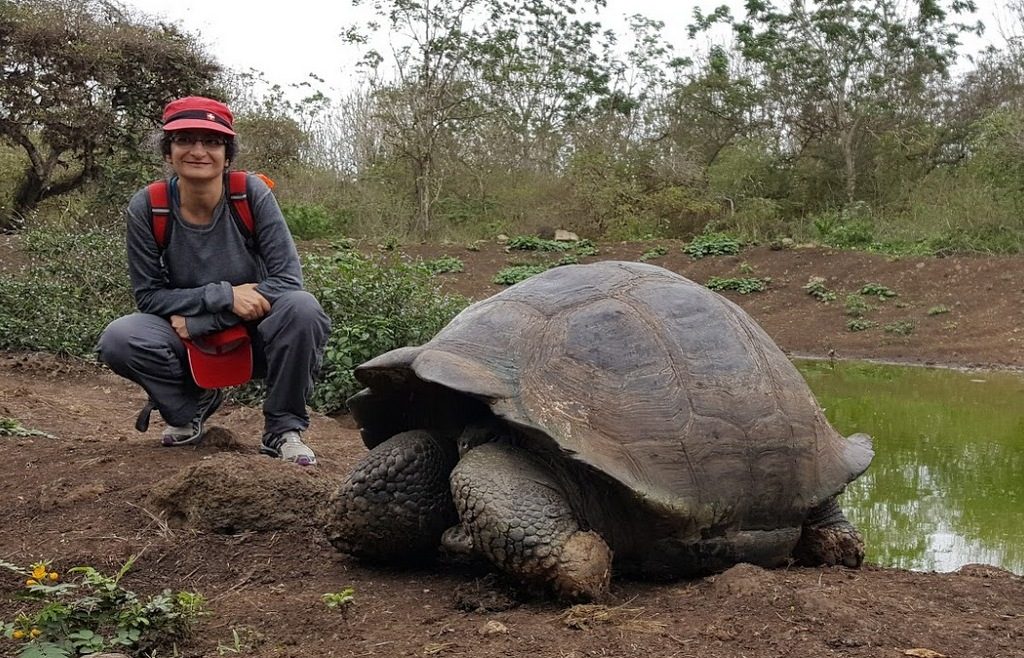 At the Darwin Center, an animal research and rehabilitation facility located on Santa Cruz, we also saw our only land iguana: 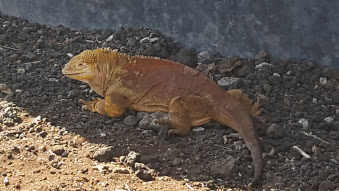 We left the Galapagos Islands with a heavy heart. We felt like we could have stayed much longer, and wished we could have seen the reminder of the islands. A reason to come back, perhaps?