“Disillusions,” an Artwork for Our Times

In March I was visiting my ailing mother when the war in Ukraine started out of the blue, jolting me like it did many others. Coming as it did two years into a still-raging pandemic, it felt like yet another world-shuttering event in an ever-growing list of disasters. As if a global pandemic wasn’t enough. Or the long list of natural disasters that effected many parts of the world over the last couple of years. Now, in addition to all of that, a democratic country was being attacked without provocation. Unimaginable atrocities were befalling innocent, ordinary people, who could have easily been you or me. The natural world was already out of sync. Now, our fragile human order was also threatened.

This past March was exceptionally stormy in Israel. Instead of normal spring weather, we experienced day after day of downpours and strong winds. I was in the midst of dealing with my mother’s devastating health crisis. Everything felt wrong as it was, even before the war. The bad weather seemed appropriate, somehow, reflecting my mood.

Sitting in my mom’s living room a few days into the war, rain banging on the windows, my mom gravely ill in the next room, a picture sprang into my mind. A quilt. Another installation in my State of Human series, in red, white and black. A quilt depicting human illusions and disillusions.

On the left side of the quilt I saw the castles we build in the air. The plans we make, our daydreams, our hopes. Our unfounded fantasies of things to come. Because we can’t really live without plans. They keep us sane and keep us going. And yet, every plan we make is based on false assumptions. The assumption that there is a tomorrow, and that we will live to see it. The assumption that things will be the same in the future as they are now, or that we have some control over how things unfold.

On the right, I saw a pile of rubble. Disillusions. The collapse of everything we assumed. Because in fact, we have zero control. We don’t know what the future will bring. At any moment things can turn upside down, as every human on this plant must have realized in the last couple of years. A pandemic might put an end to all our plans. Natural disasters might upend our lives. Wars coming out of nowhere might put an end to our normal, peaceful existence. Calamity might befall people we love. Any moment can be our last.

We have a saying in Hebrew based on an old Yiddish proverb: “We make plans and God laughs.”

I stayed with my mom for a month. When I returned home, I set out to make the quilt. As with all pieces in this series, I started with a photoshoot. Except that this one wasn’t so simple, and took a LOT of slightly-different attempts. It was the most awkward and the least comfortable of all of the photoshoots I took so far. 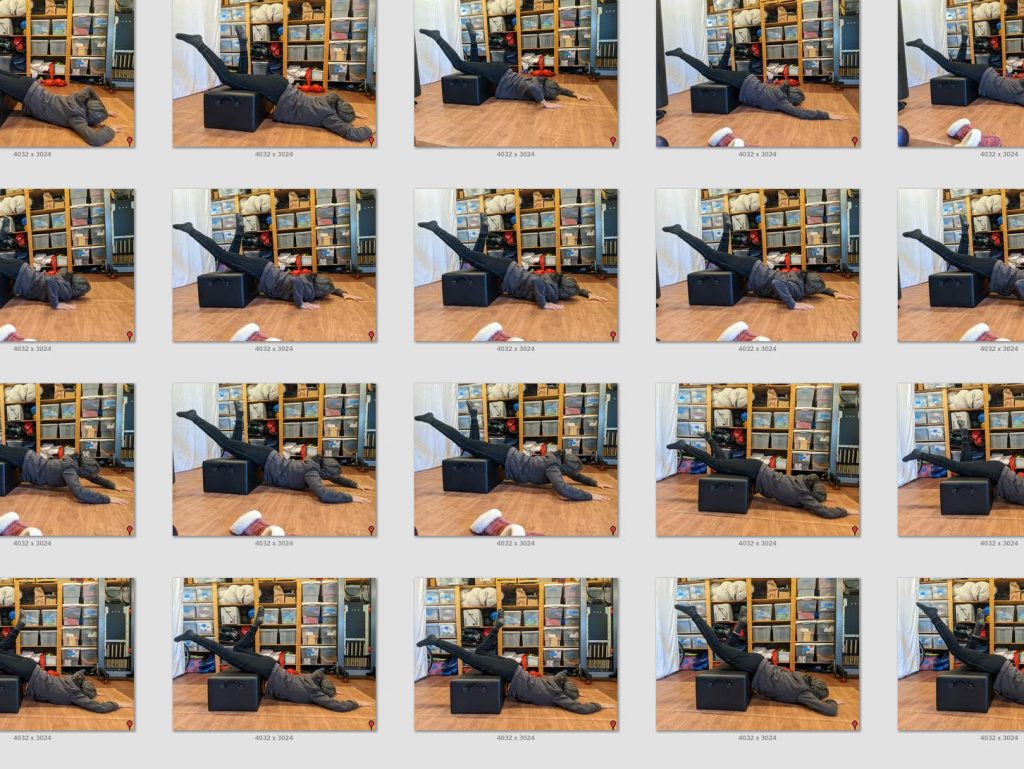 Choosing the exactly-right pose wasn’t easy, but I finally settled on one.

Then I made the background, a fairly simple task. Its funny how sometimes pretty complex ideas have simple beginnings… 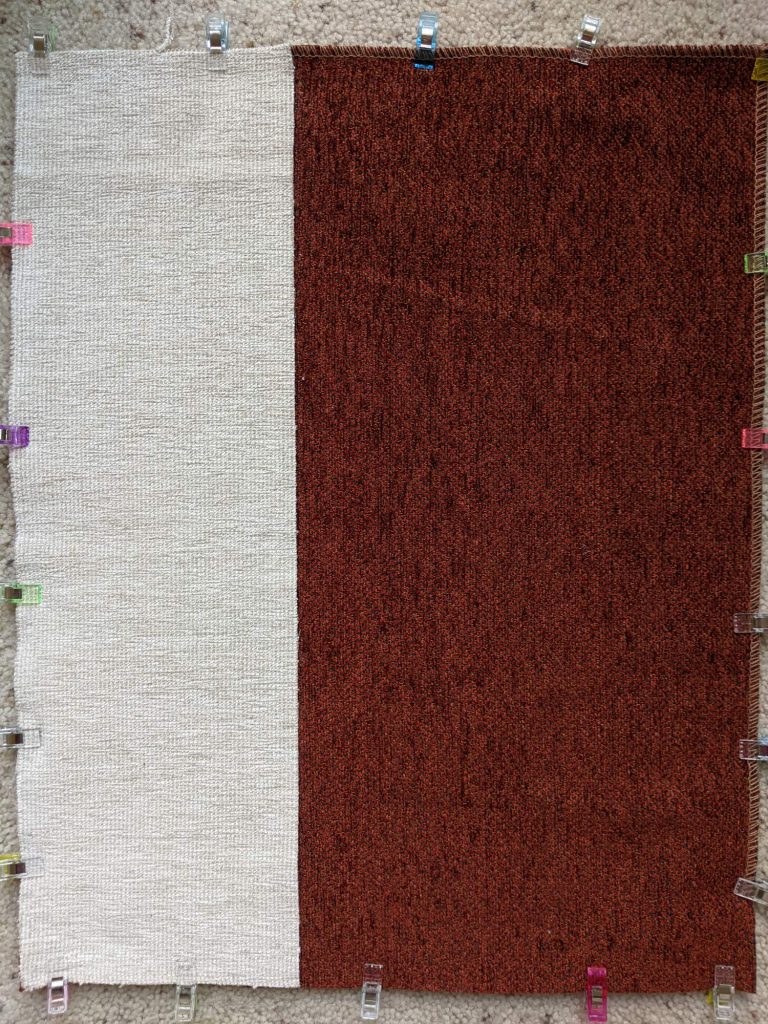 After that, I used black silk, on the back of which I ironed fusible bond-a-web, to cut strips with which to build our “castles in the air.” I wanted the black bars to have fairly crisp, controlled edges. Black on white. Smooth silk on rough upholstery. Thin strips on a wide background. Contrasts and contradictions. 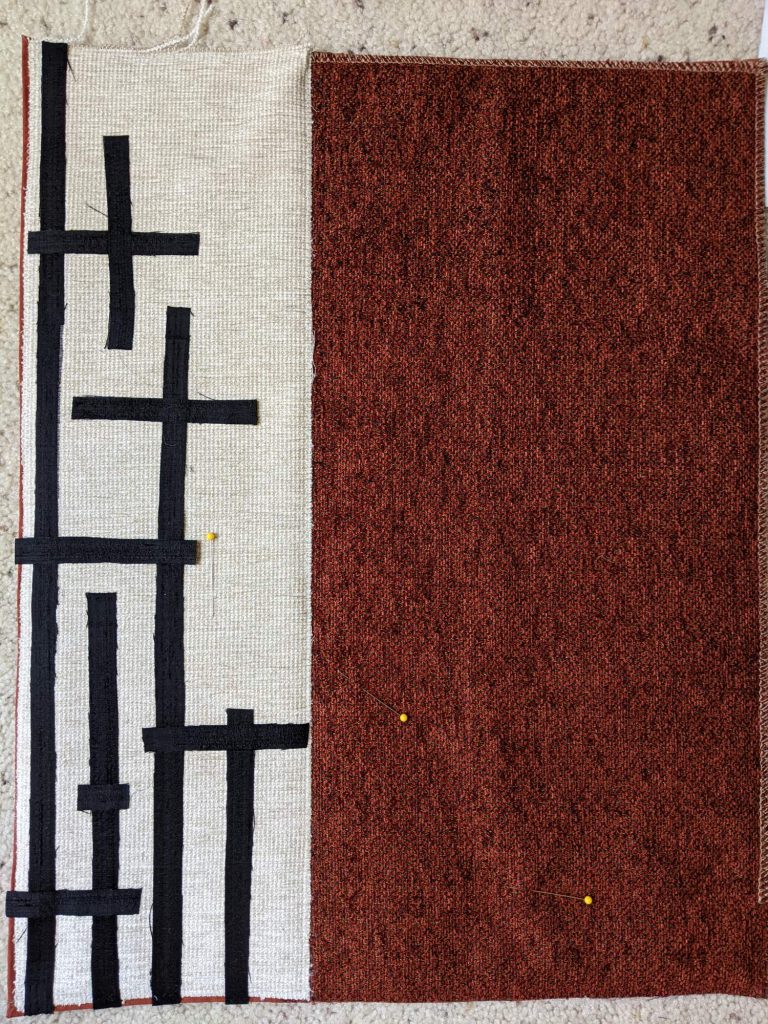 For the disillusions part, I decided to go with ivory strips. Both to stick with the series’ color scheme, and because that color made me think of bones. I wanted something with ruffled, frazzled edges, that will stand in contrast with the crisp edges of the black lines. When I looked through my scraps, however, I found nothing suitable.

Then I thought of sari silk ribbons. A while back I read about quilters using them, and I suddenly realized these might be perfect for the job. So I ordered a bundle of ivory-colored sari silk. My husband thought it was funny that I paid good money for scraps, but that’s what we upcyclers do! When it arrived, the little bundle had more ribbon in it than I could have ever imagined… 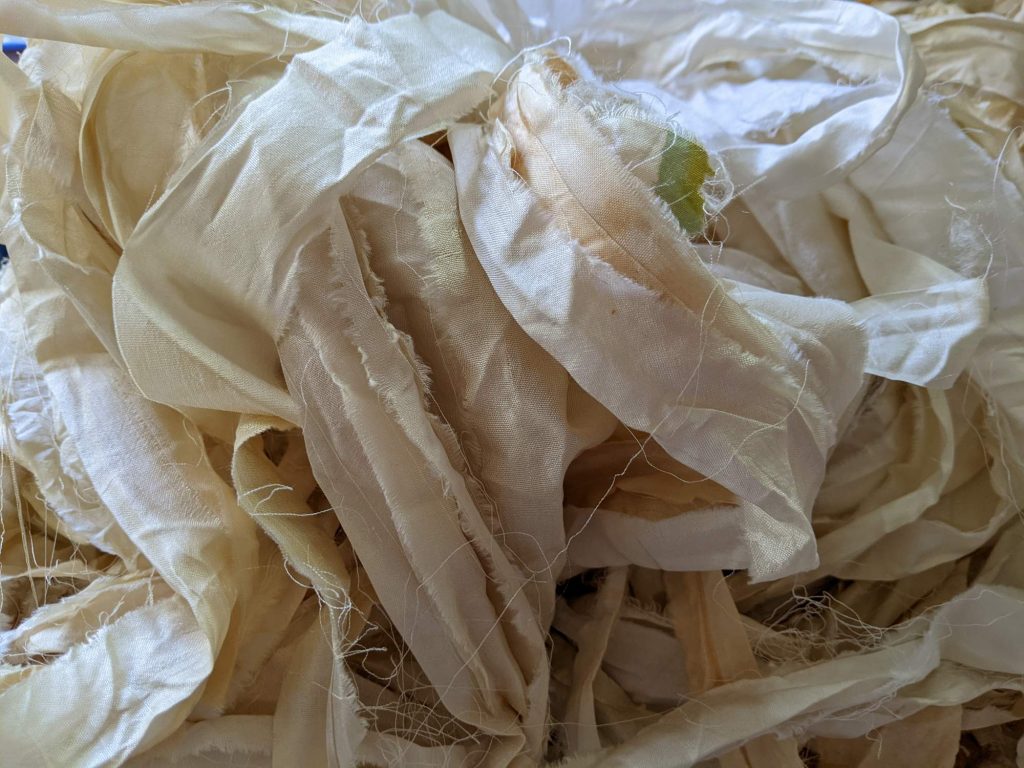 After I had all the components at hand, I put the quilt together. Here it is: Disillusions, 16″ x 20.” 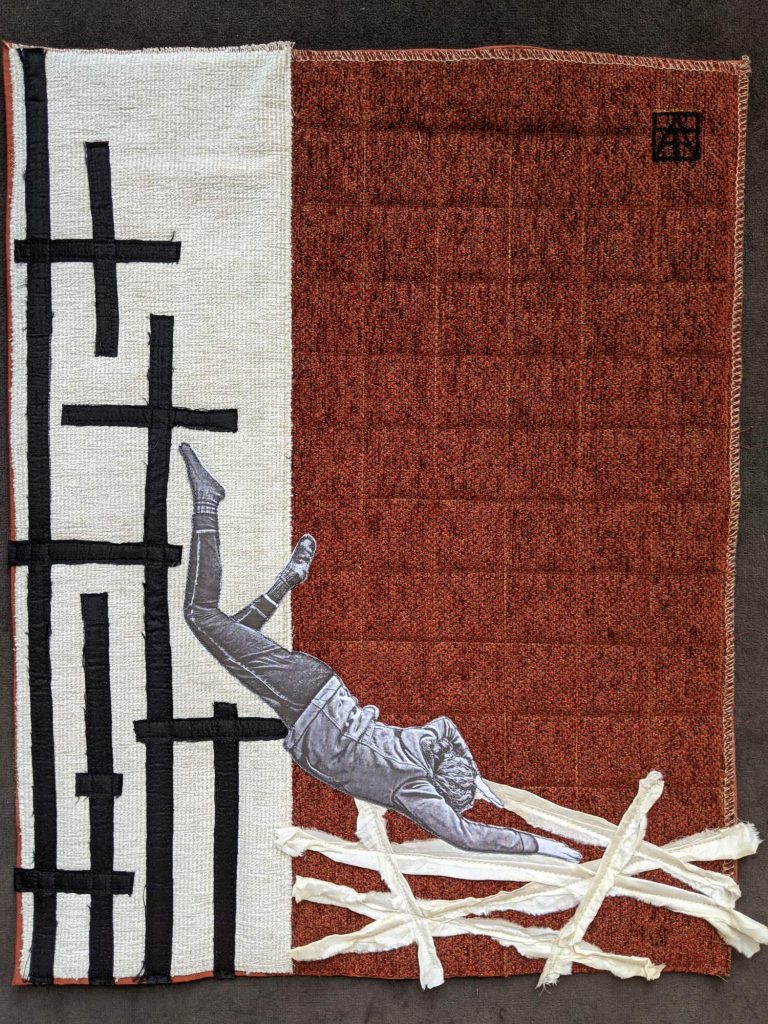 On the very same day I sewed the last bits on, a picture appeared in my news feed that made my heart skip a beat. The picture, taken by Ivor Prickett (see his account on Instagram), was published in the New York Times in an article about the war in Ukraine.

This picture, cropped below, illustrated quite literally the image that popped into my mind several weeks earlier… It sent shivers down my spine… 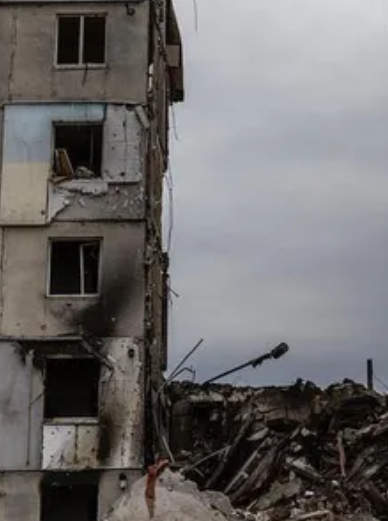 The horrors of war. Our collective disillusions. In my mind, and in real life…

4 thoughts on ““Disillusions,” an Artwork for Our Times”