Some people need to exercise to feel good. Others need tasty food. Me? I need to surround myself with color.  And yet, in the past many months a lot of my work has been mostly color deprived. It dealt with heavy, serious topics that called for a limited, mostly black, off-white and red palette. It was what I had to do, and I was glad to be doing it. And yet, by mid winter, when the days were gray and short and my garden was in deep slumber, all of this color-deprivation started feeling like a little too much…

My mom was worried about the colorless art she’s been seeing. She suggested I take a break to create art for fun. I resisted at first, but then realized she was right, yet again. I decided to take her advice. When I finished the Absence series, I took a break from serious issues, and allowed myself some time off to play with my scraps. 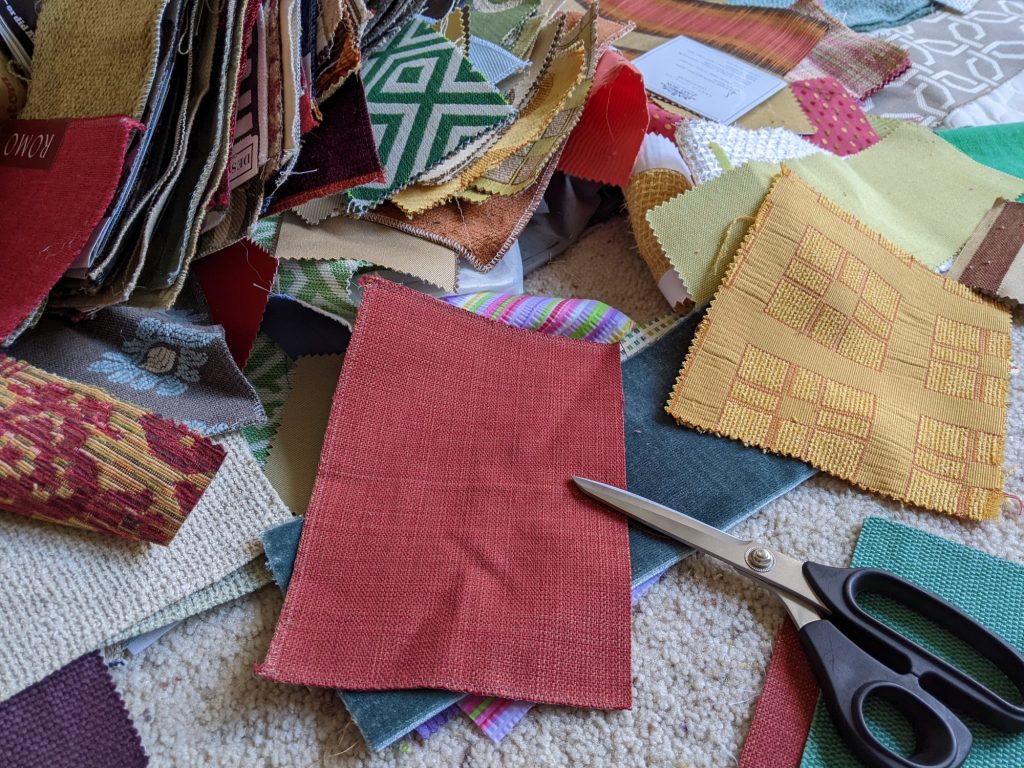 I started arranging pieces of fabric, making small, colorful compositions. Soon, vague rules for a new series were born. A total of nine pieces, each 9″ square, but not necessarily strictly square. A limited number of fabric pieces in each. One long and narrow piece somewhere in the middle. Mostly geometric patterns. 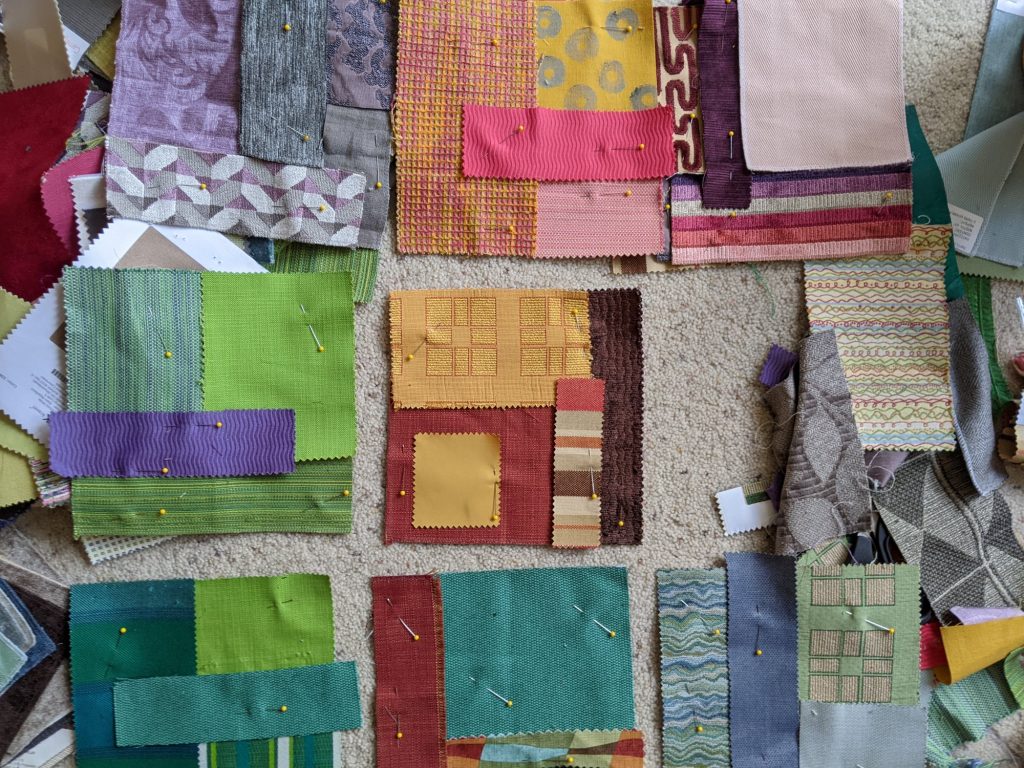 The floor in my sewing room filled with color, brightening up the dark winter days. 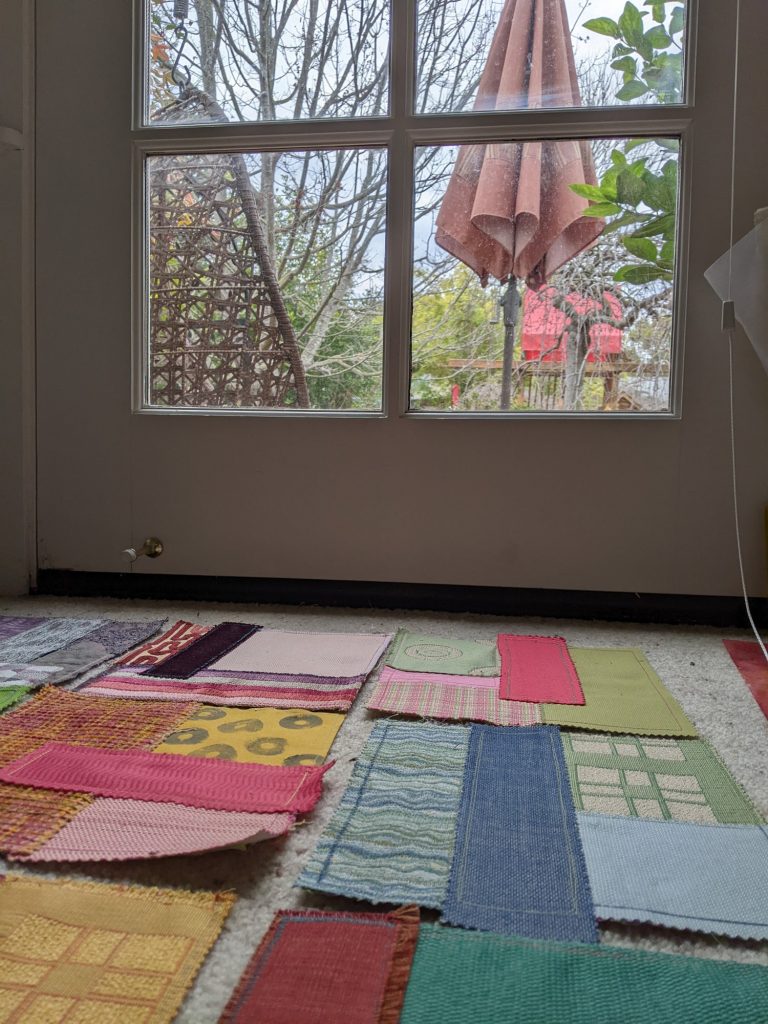 Since one of my goals this year is to incorporate more surface design into my work, I used various found objects to print onto some of the fabrics. Mixing different shades of acrylic paints helped bring yet more color into the room.

I sewed each piece with my sewing machine, using lots of colorful thread. Then, I went digging in my little collection of embroidery thread. 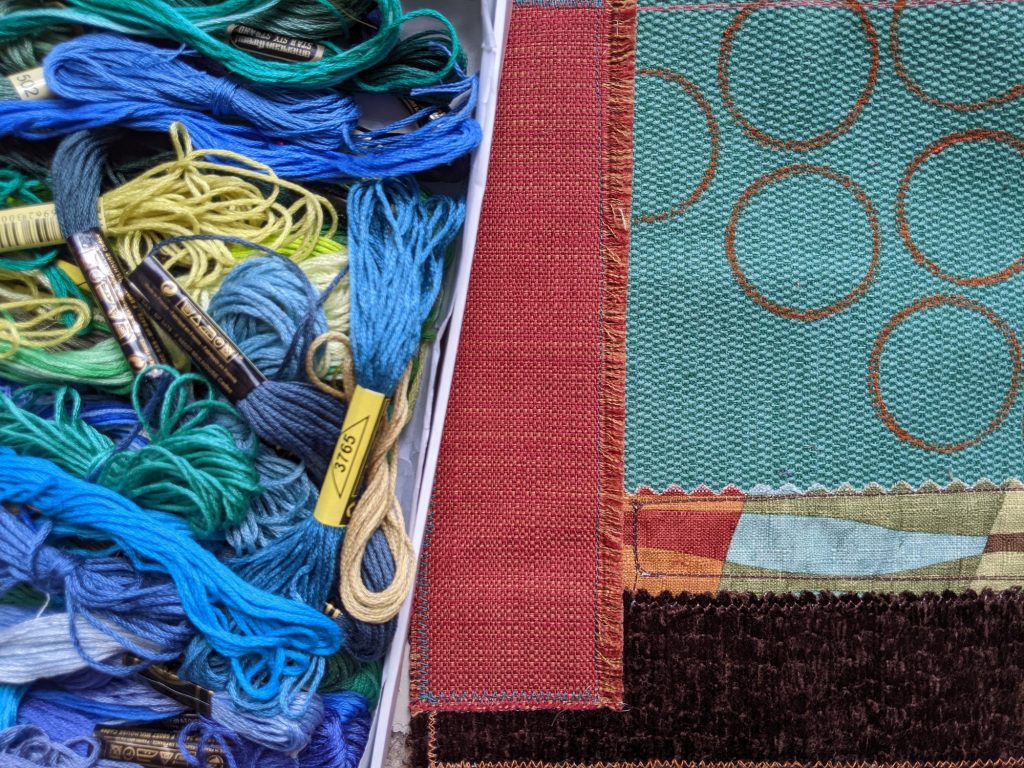 Choosing thread and matching it to fabric is always one of the parts I love most. 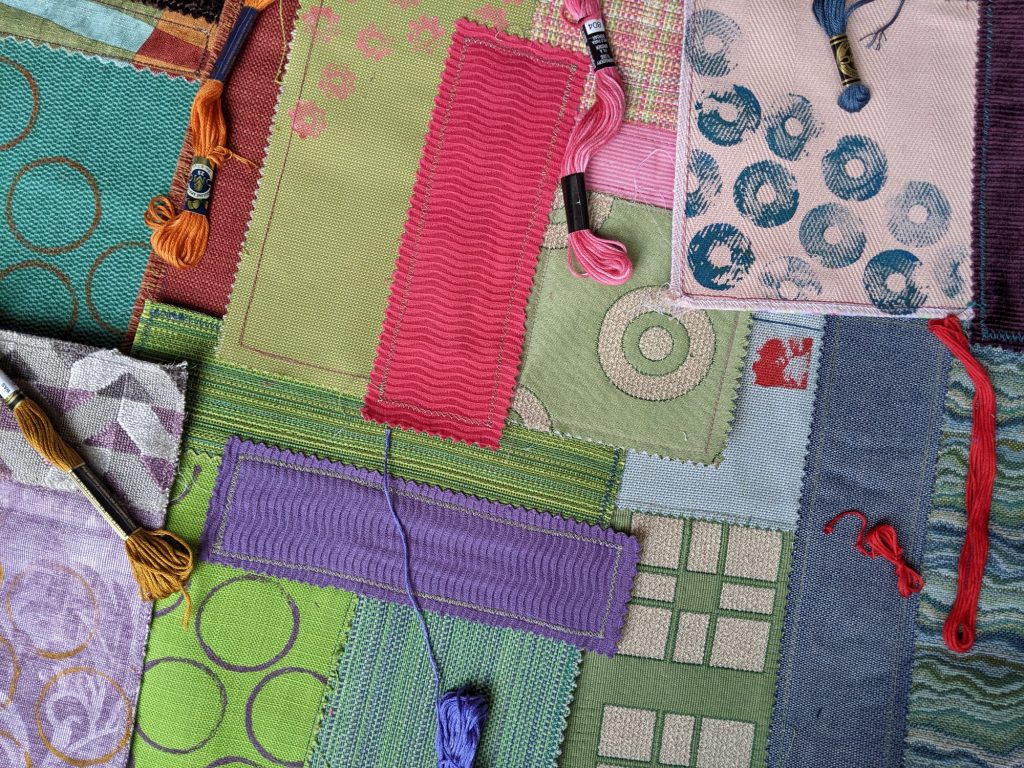 I added hand stitching, and a lot of French knots (because it was a French knot kind of week). Two of the pieces absorbed some of the random found objects that sometimes end up in my sewing room.

The end result: a small, colorful series to uplift mid-winter blues. I called it Color Therapy because its purpose was to use color to lift the spirit. It was exactly what I needed 🙂 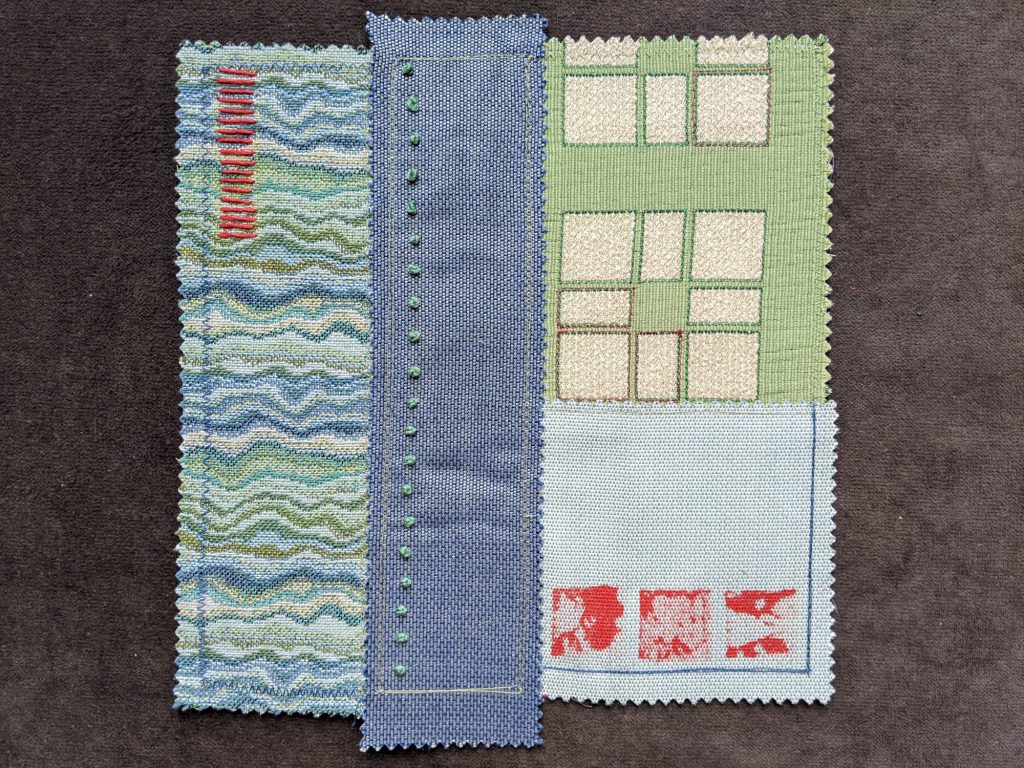 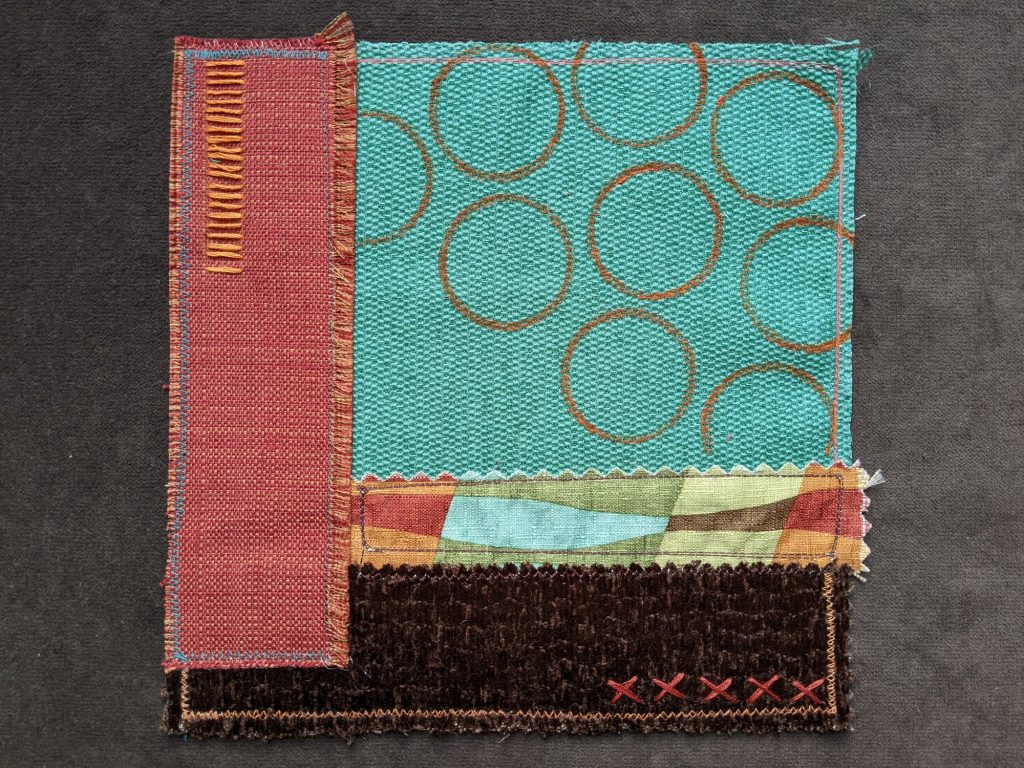 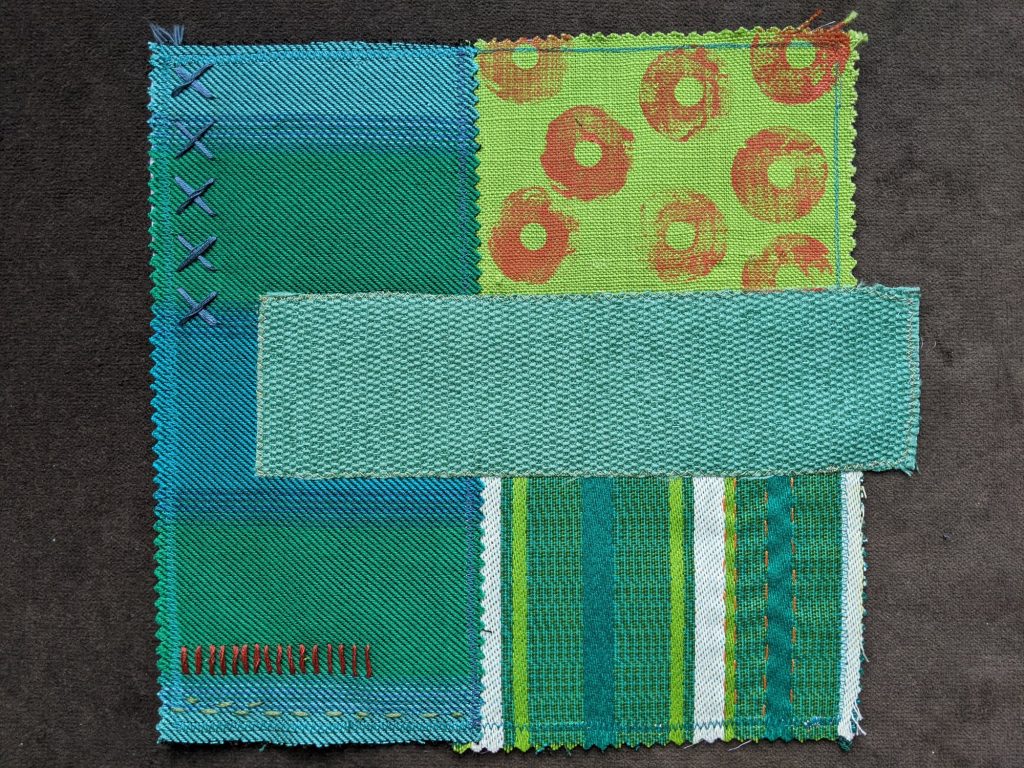 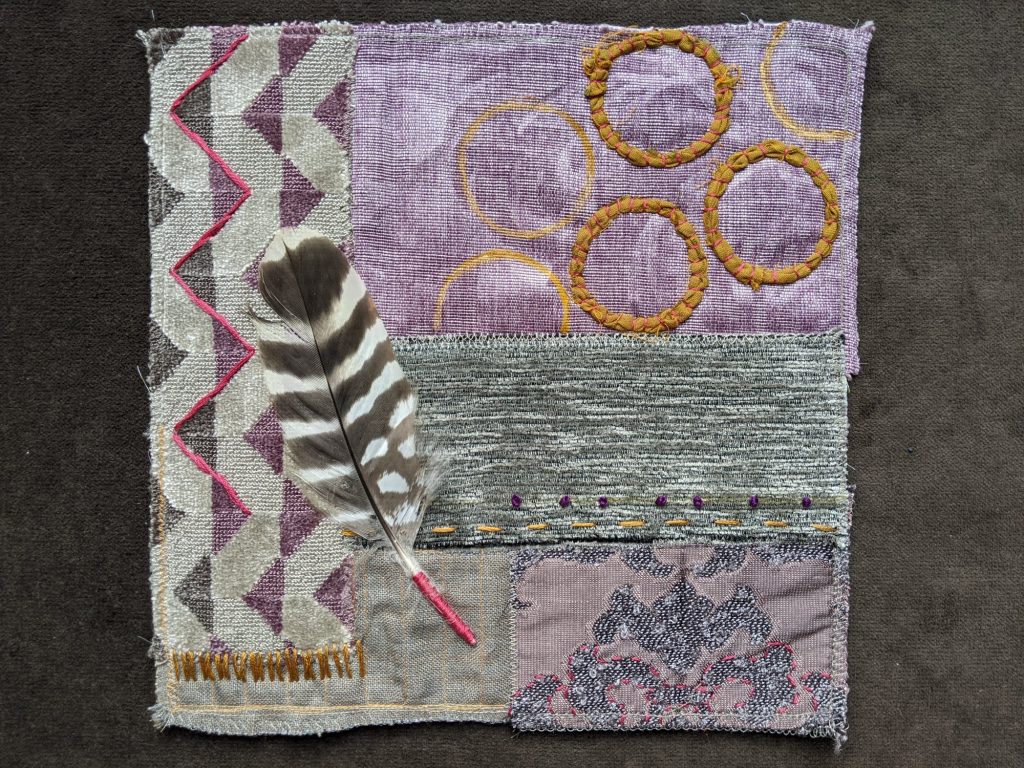 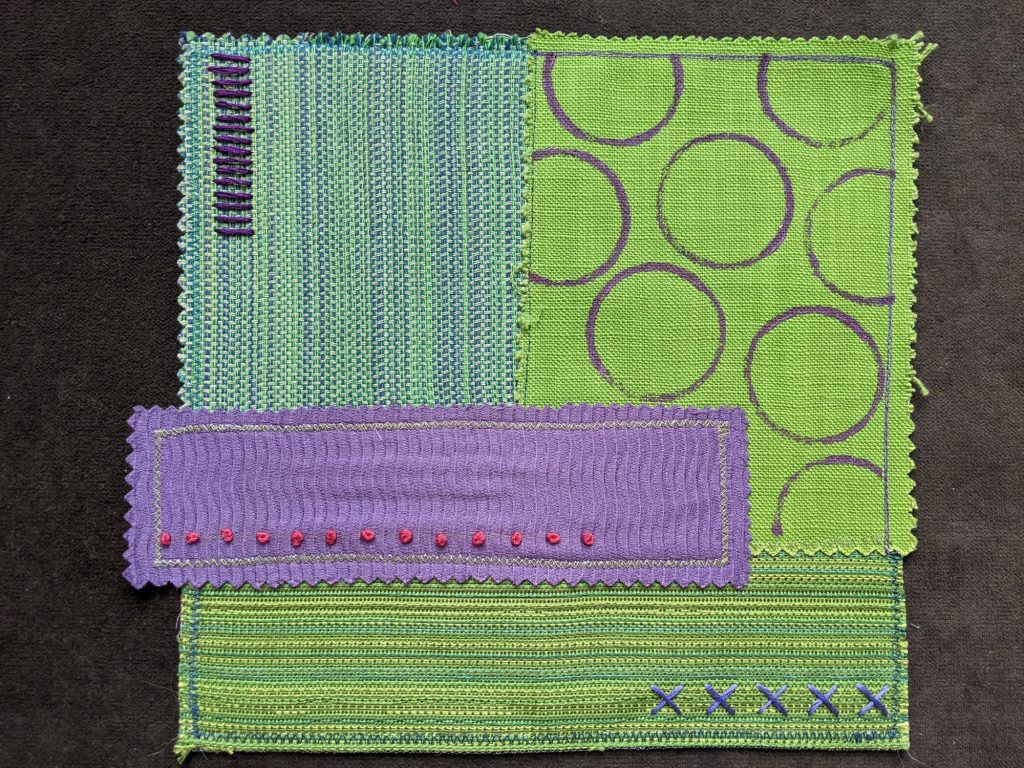 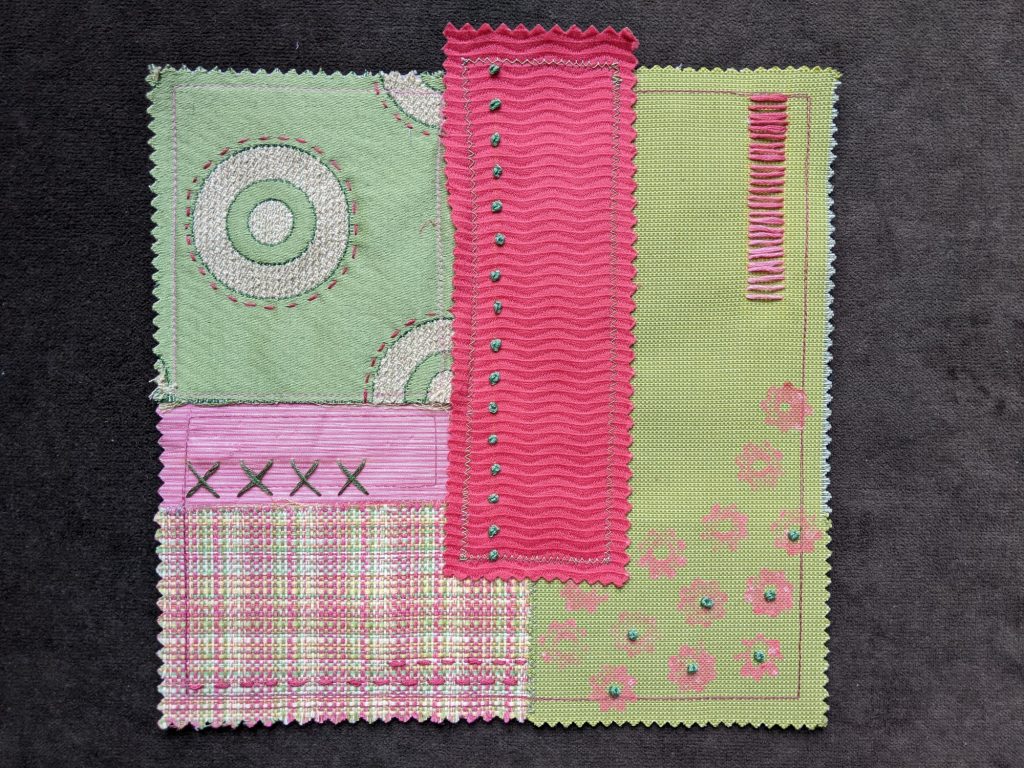 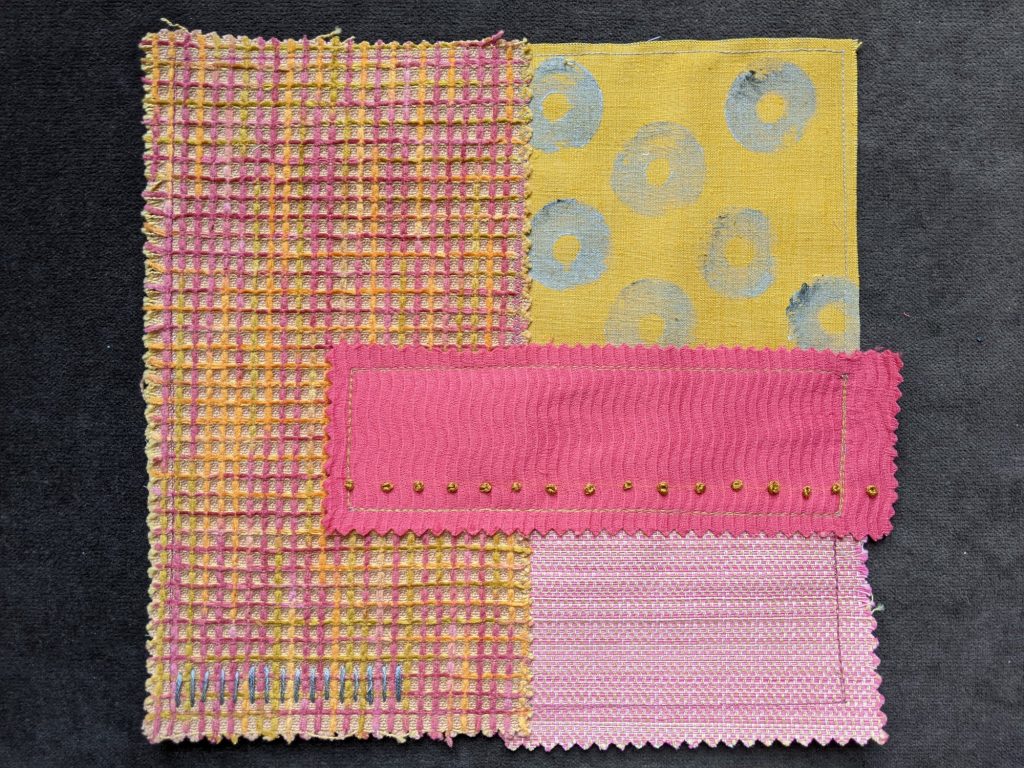 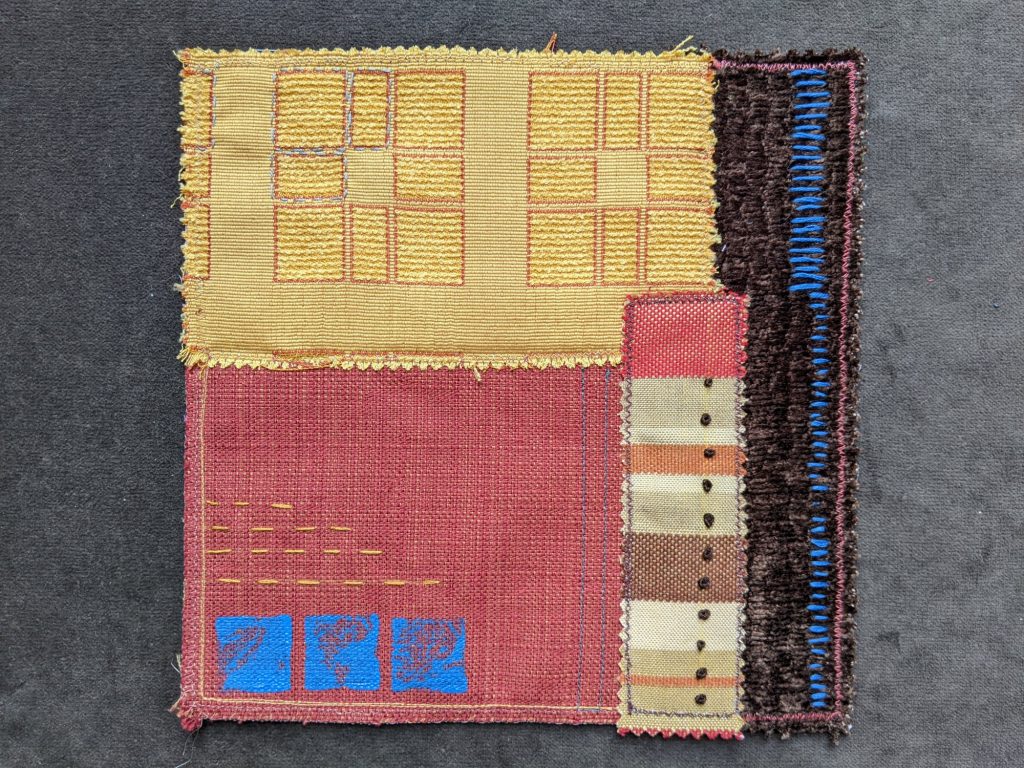 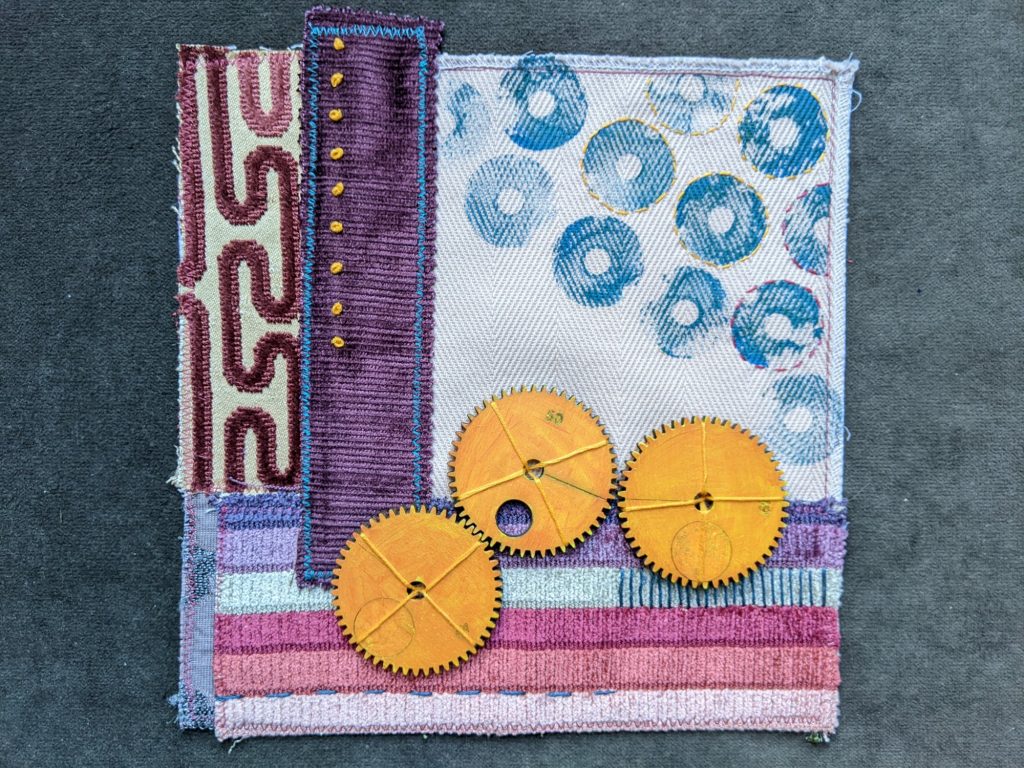 After the nine pieces were all finished, I started arranging them in many different ways. They were all connected by color, after all, and each had several colors. I had fun playing with the possibilities: sorting them from left to right, from right to left, from up to down, back and forth… 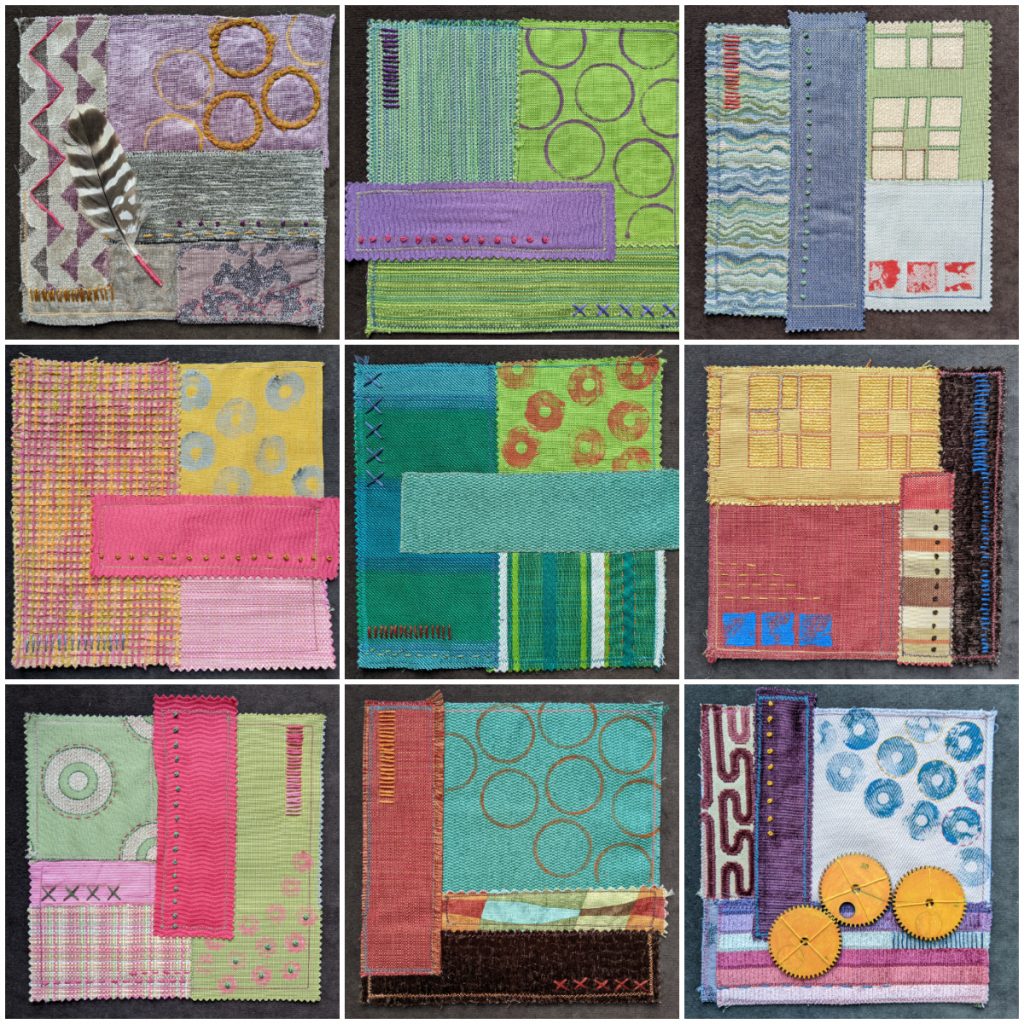 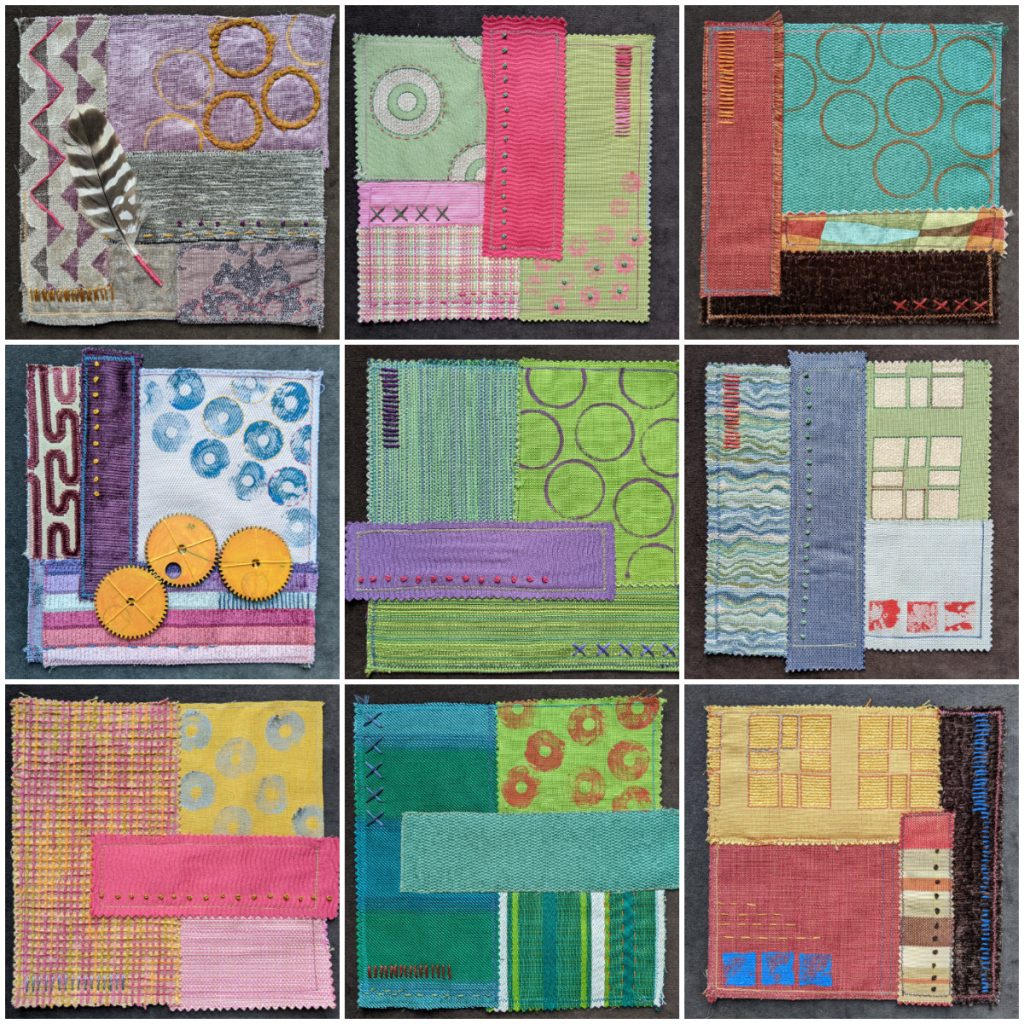 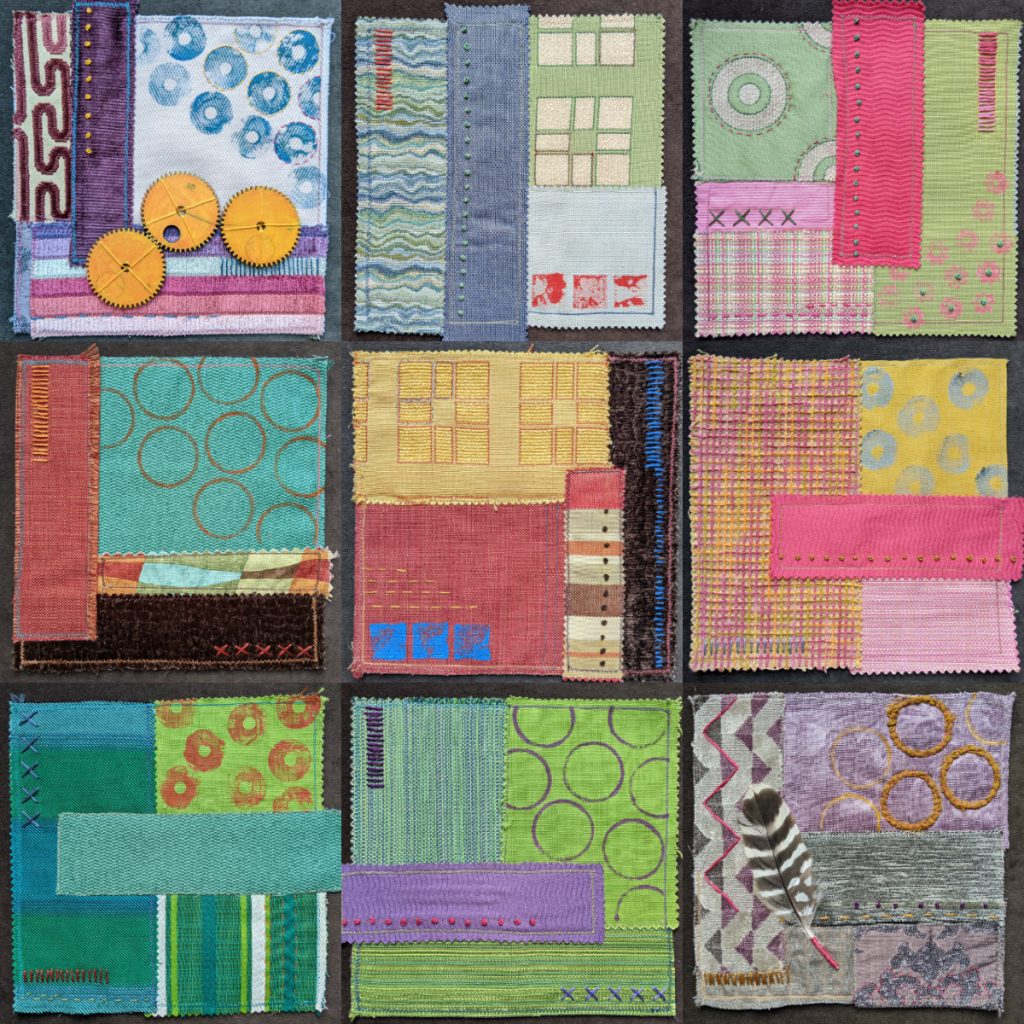 Originally, I saw them as nine individual pieces, and was planning to mount and frame them separately.  Now I’m starting to wonder whether they should be put together into one bigger piece. What do you think?