In August 2017 we were privileged to witness The Great American Eclipse. As noted on Wikipedia, this total solar eclipse was visible within a band of the USA that spanned from the Pacific Coast all the way to the Atlantic, something that hasn’t happened since June 1918, and will not happen again until April 2024.

To see the eclipse, my family traveled from California to Madras, Oregon, where we camped for a few days at an eclipse camp. The overall experience was memorable and positive, and the eclipse itself left a great impression, too. What I remembered most were the multiple hallows around the sun. There were also weird shadows that projected circles within circles on all flat surfaces for the duration of the event. 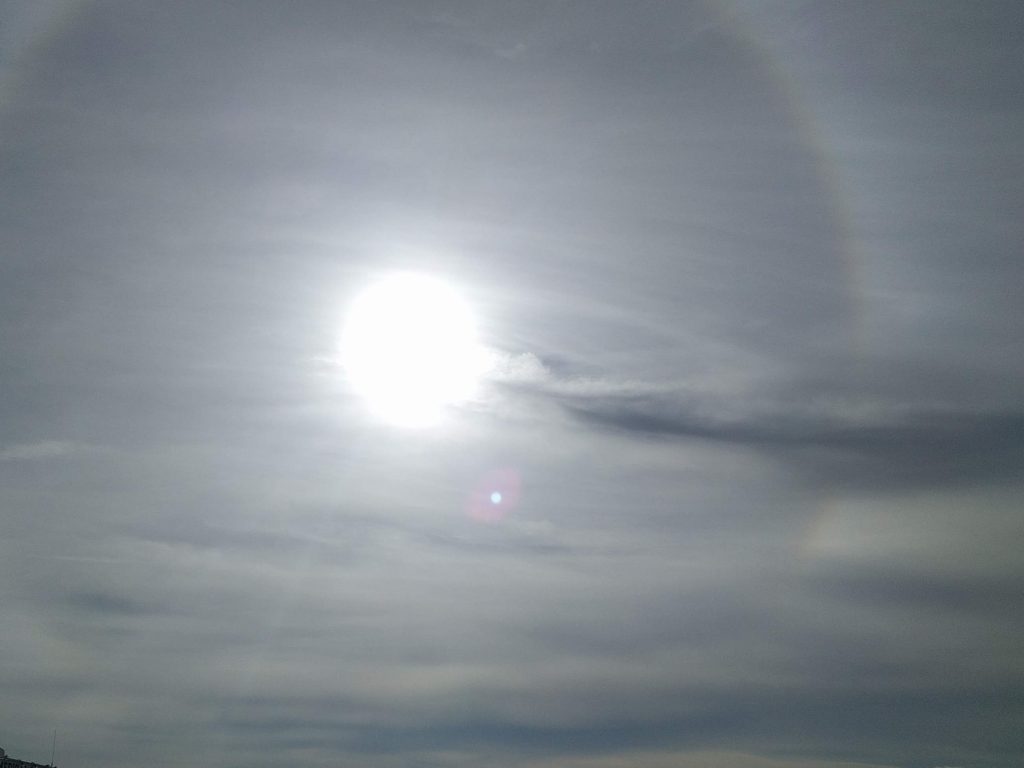 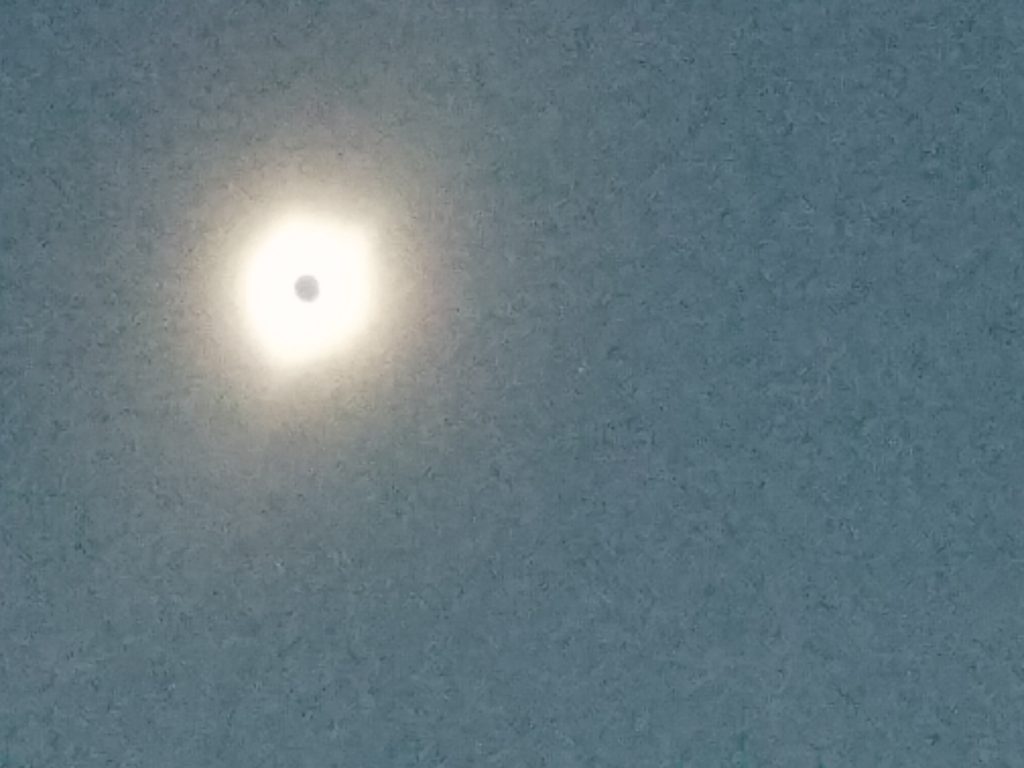 When I came home, the circles stayed with me. Shortly afterwards, I started working on my third-ever art quilt (following Give a Hand and Dare!). At that early stage in my art-quit journey, I was still hung up on the idea that quilts needed to be composed of blocks. And  so, like in the two quilts which preceded it, I started this piece by sewing a nine-patch grid as the background.

One of my goals for this quilt was to experiment with a color scheme I didn’t normally use. I also wanted to try reverse applique for the first time. After some thought, I created a composition of appliqued and reverse-appliqued circles of various sizes. I positioned them inside squares and rectangles. Then I arranged and rearranged them until I the color balance felt right. Afterwards, I spent hours hand-stitching the pieces on, and also adding embroidered details (a slow, arduous and painful process, as hand-stitching through thick home-décor textiles is not that easy…).

I ended up with a quilt top, which I named Eclipse: 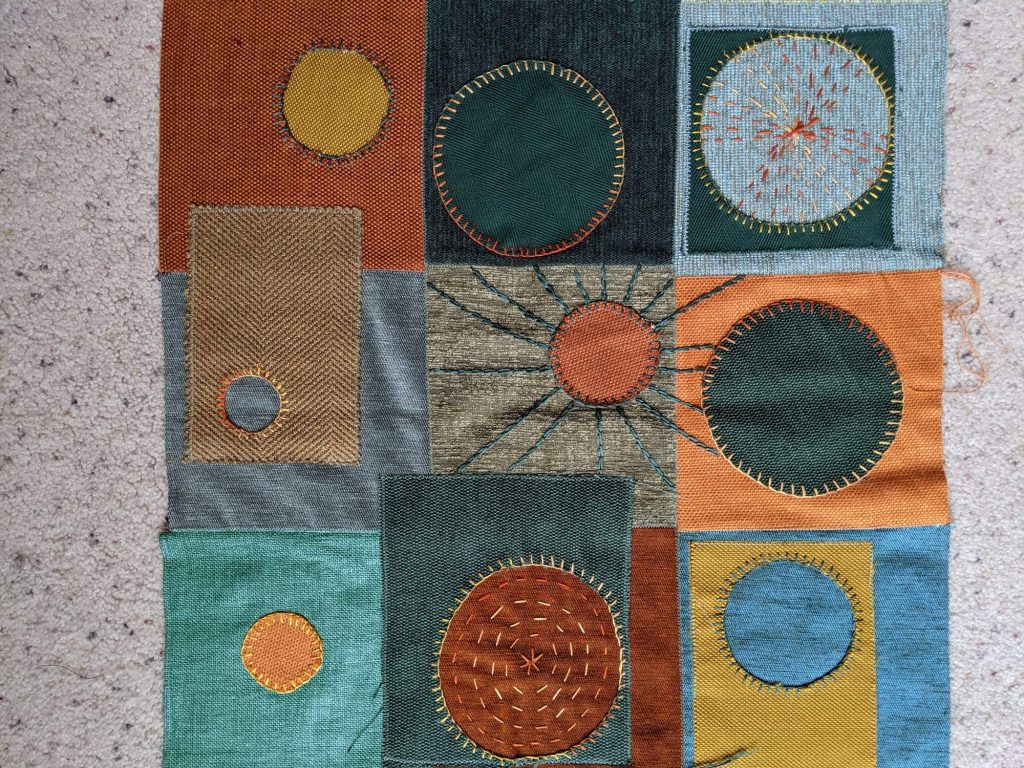 Somehow I didn’t complete this piece, however, and the top ended up in my UFO pile, where it languished for years.

When I fished it out in January of this year as part of my UFO-completion goal, I wasn’t sure if I should finish it. My quilt-designing taste evolved since those early quilting days, and if I were to design a quilt around the same idea now, I would probably have done it differently. Eventually, after a long contemplation, I decided to finish it after all, mostly because I had already put so much work into it.

Finding a backing and sandwiching the quilt was easy. Deciding how to quilt it … not so much. I  thought long and hard, but couldn’t come up with a good plan. I consulted wise quilters in one of my Facebook quilting groups. Some people suggested using metallic thread, and I seriously considered doing that. I never used metallic thread, and don’t own any, either. I considered buying some, but realized I probably won’t use it often. And so I decided to stick to thread I already have: my 12-weight solid and variegated threads!

I eventually chose to repeat the theme of circles and sun rays in the quilting as well as in the design. The quilting took a few days and required some re-evaluations along the way, but I’m pretty happy with how it turned out. 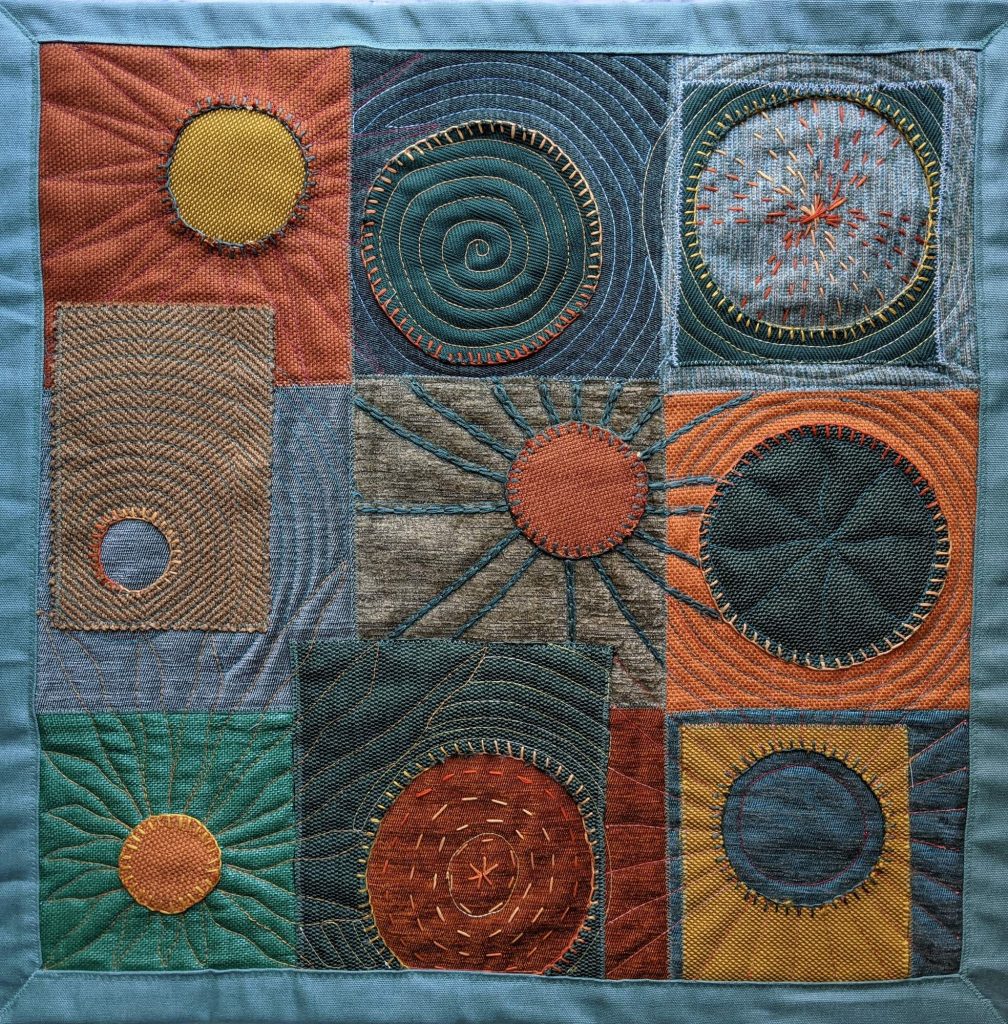