Just in time for spring, I completed a Kantha inspired spring jacket!

A few years ago my husband travelled to Bhutan, from where he sent us daily pictures of breathtaking scenery, interesting architecture, gorgeous handicrafts and things he knew would interest me, like this traditional loom. 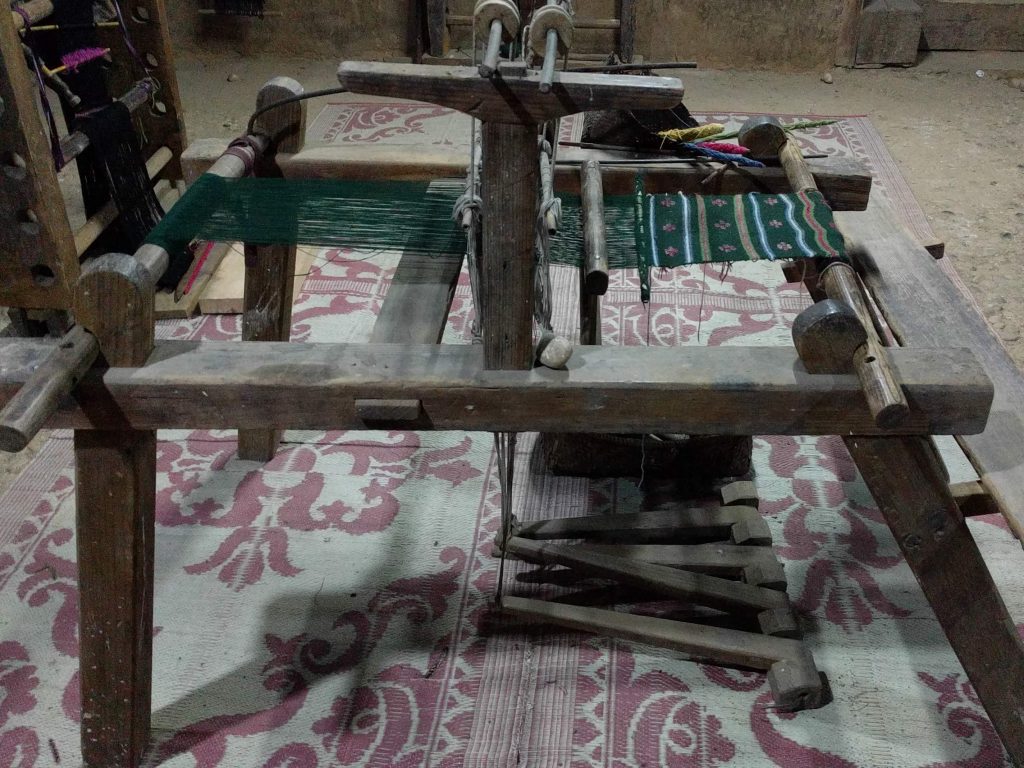 Before coming home, he visited an artisan market like the one in the picture below, and got us some souvenirs. 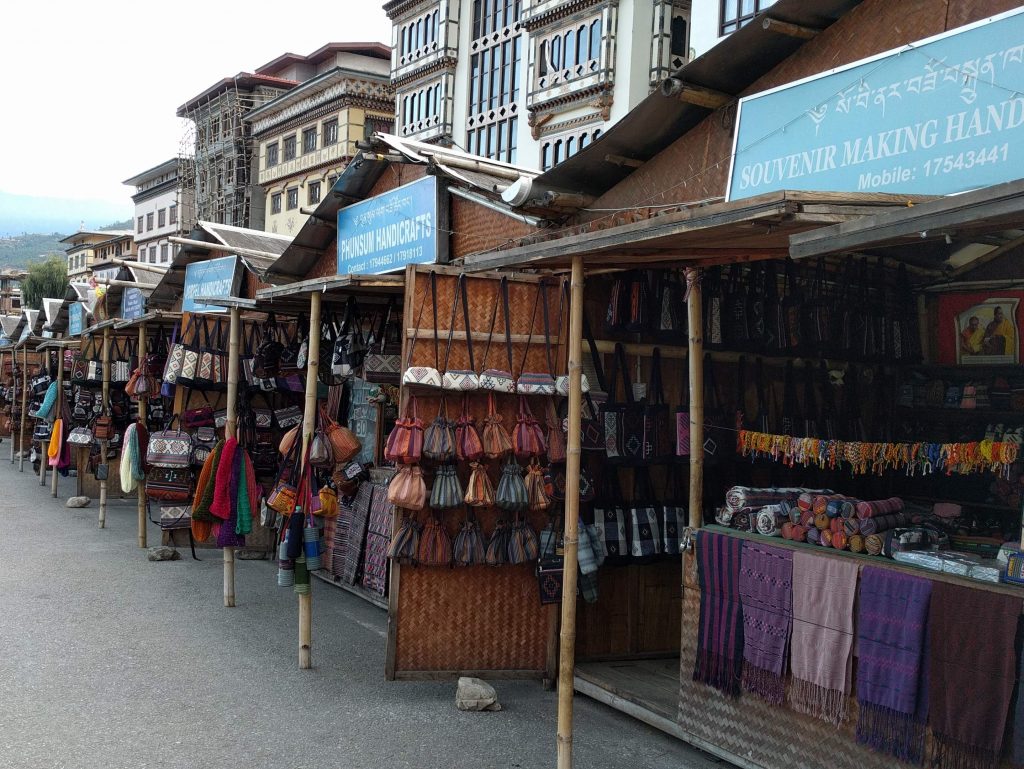 For me, he bought four panels of beautiful Bhutanese hand weaving, which he picked right off the artist’s loom. 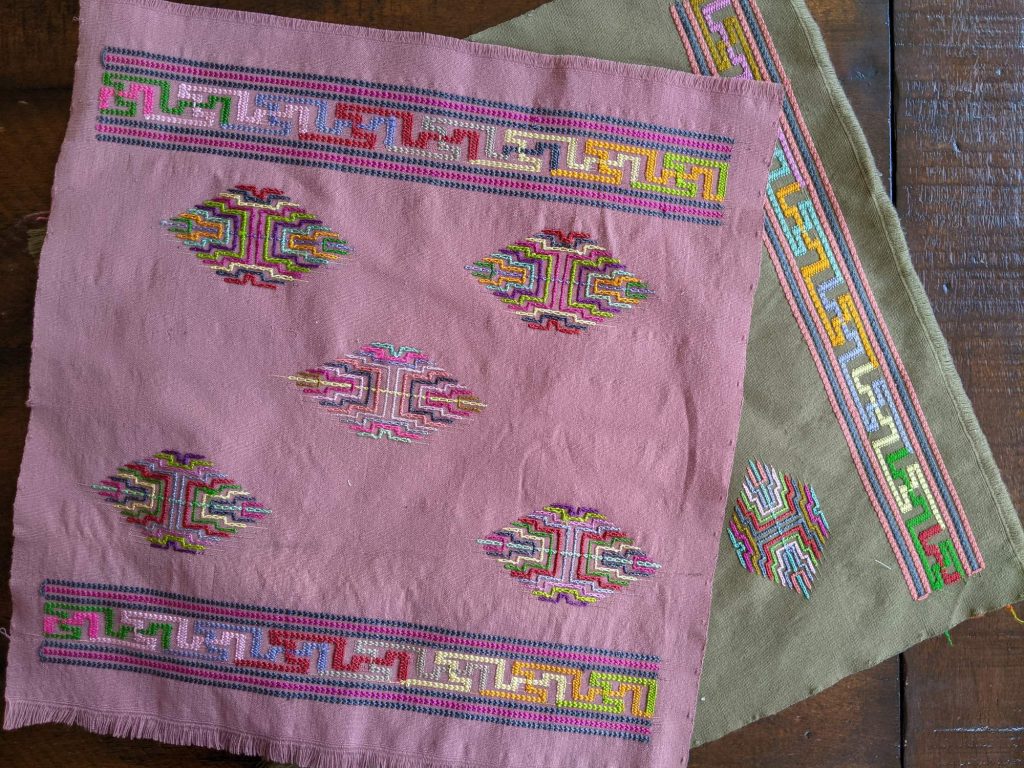 I wanted to save then for something special, and decided to use them (or some of them) for jackets. About a year ago, I picked one of the mauve panels, and started collecting matching textiles from my stash. But then life derailed for all of humanity, and the panel, with those matching fabrics, ended up in my UFO pile.

I forgot all about this project until I went over my UFO pile in January. If you look at the blog post describing my resolve to finish everything in that pile, you will see that I included it in the inventory I originally took. Since I haven’t actually started working on it, however, and since I now completely reconsidered which fabrics to use for it, I decided to not officially include it in my Finishing Unfinished Projects series.

I actually returned many of the textiles I originally selected back to my stash (many were much too heavy for spring), and auditioned new fabrics instead. 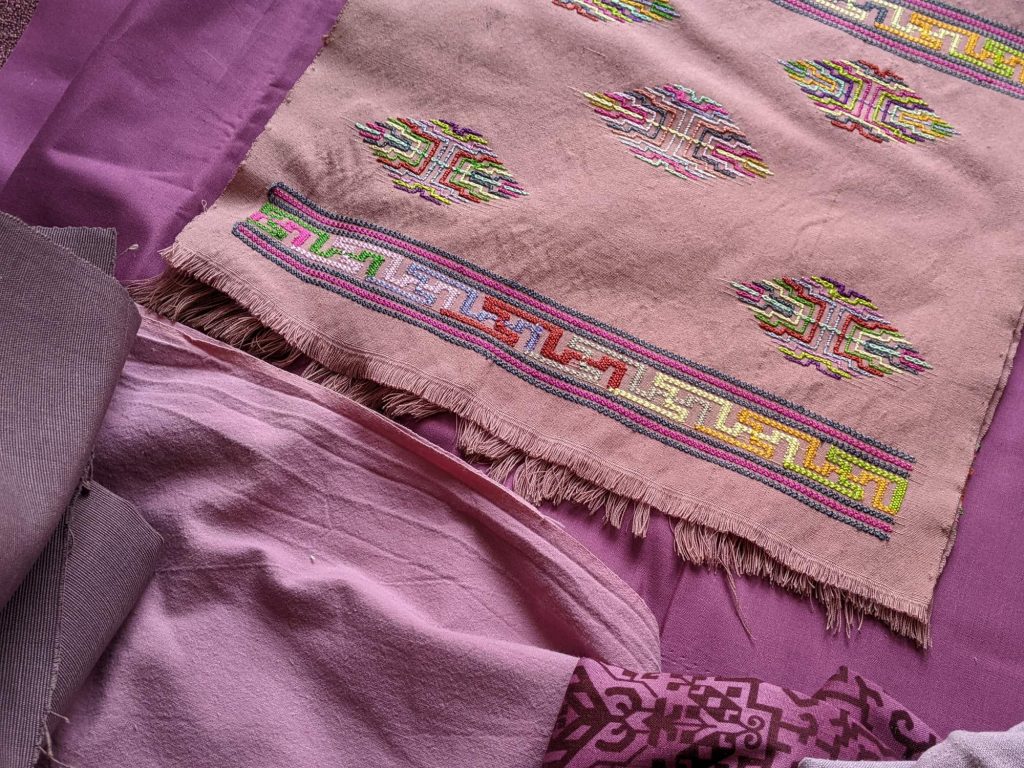 I also decided to incorporate a patchwork scarf I made several years ago as a part of the jacket-to-be. 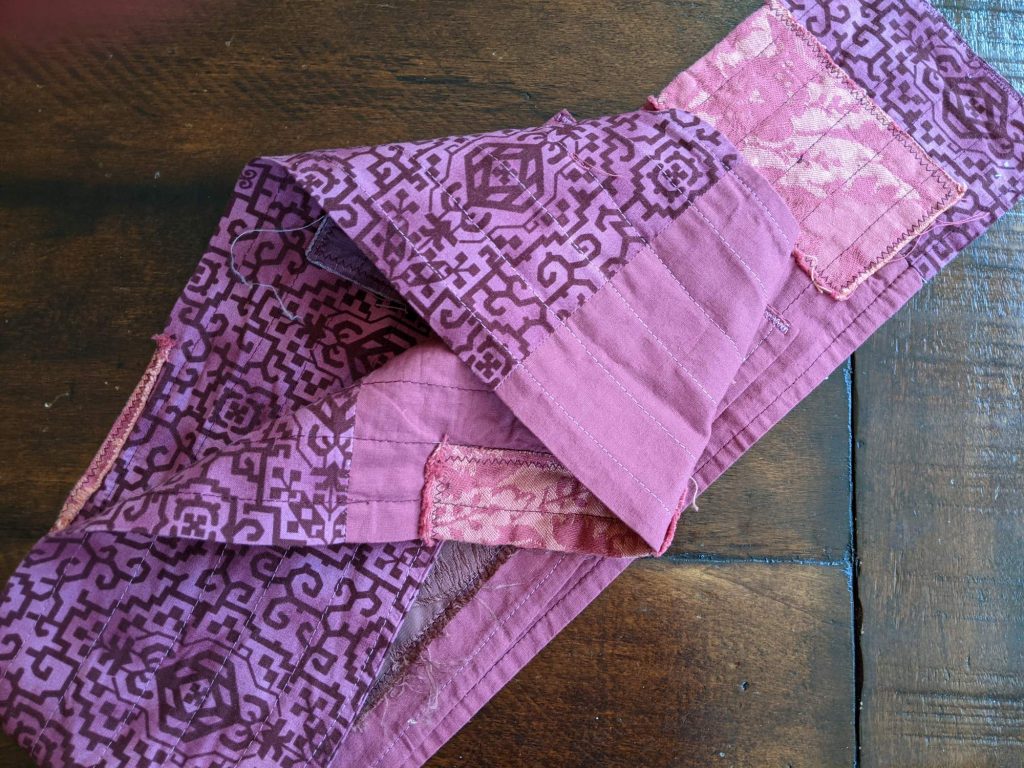 In January of last year I made my first patchwork jacket and learned a lot from it. I decided to use the same pattern for this new spring jacket. However, since this was supposed to be for spring, I wanted it more lightweight, and decided to have two layers instead of three. Whereas in my boro jacket I layered all the patches onto a base fabric raw-edge style, I decided to piece the outer layer of this jacket instead. 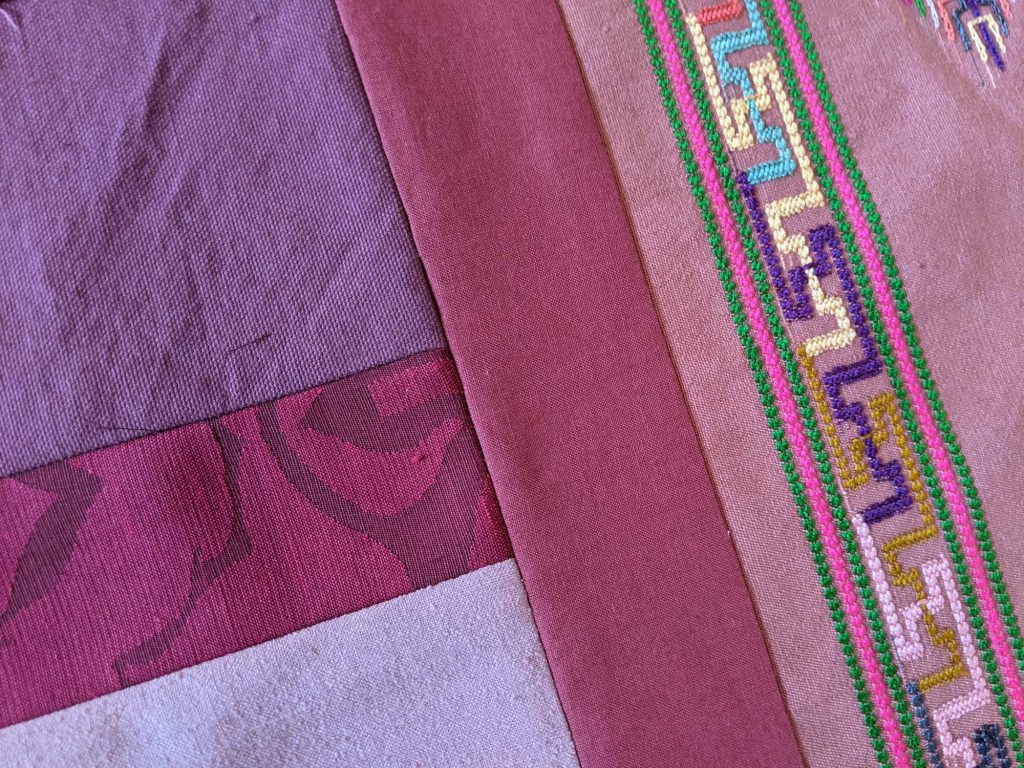 I designed the entire piece around the Bhutanese panel, and sewed the outer layer as one complete piece: 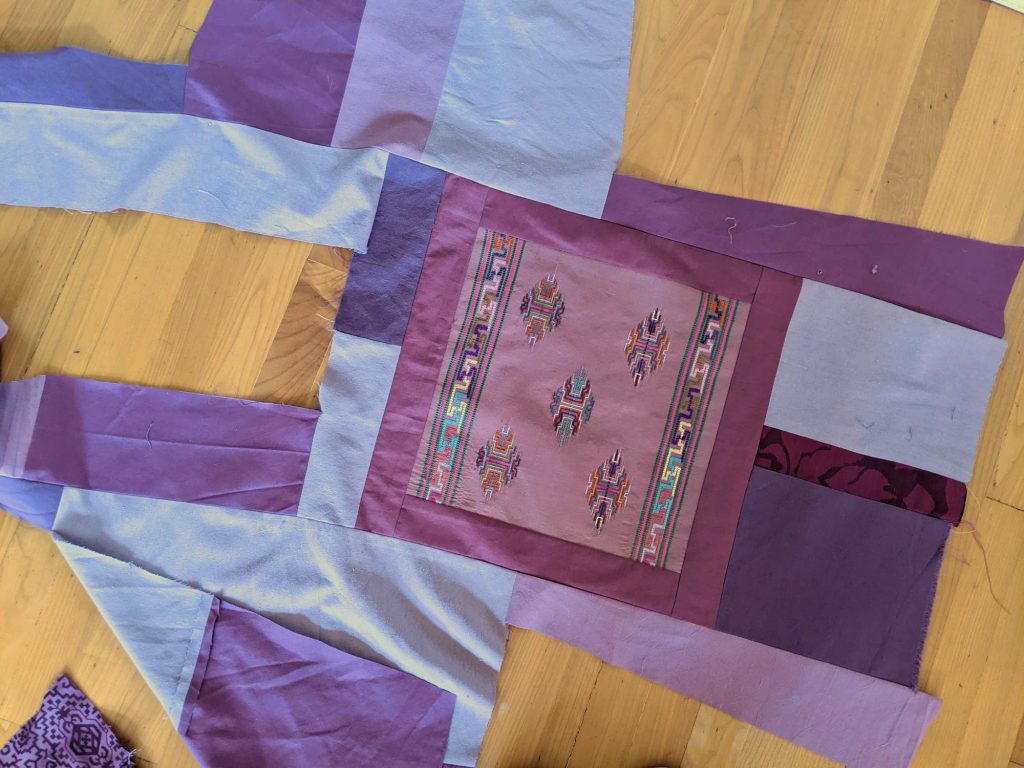 Then I sewed the entire lining: 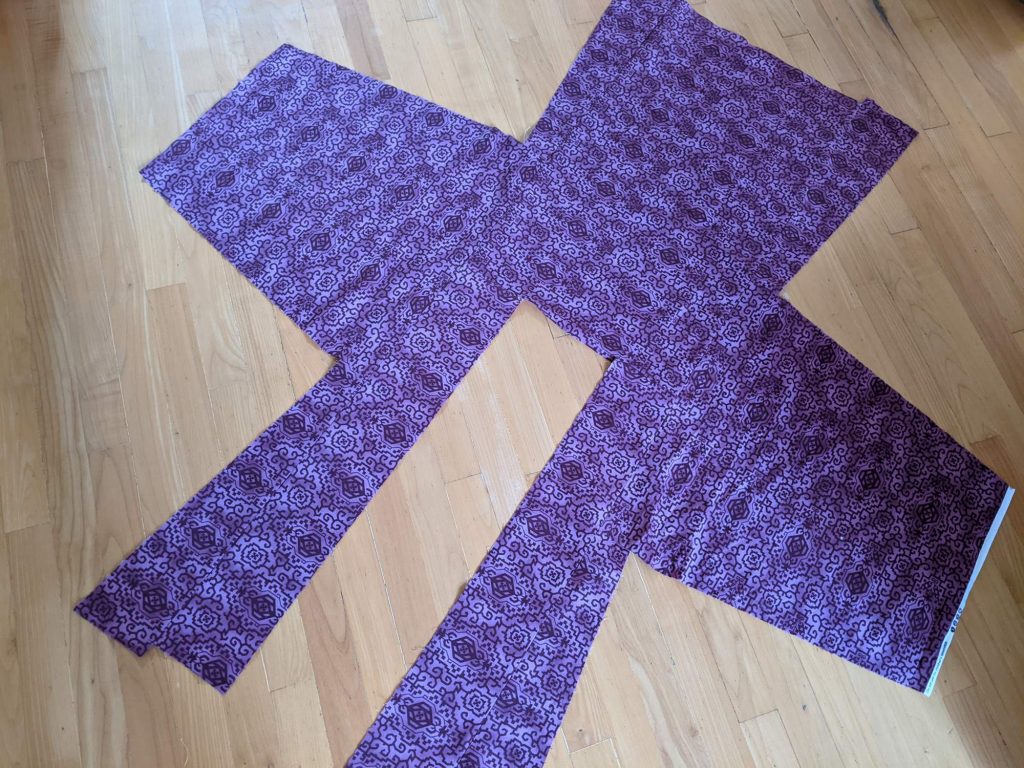 I put them right sides together, and sewed the seams of the sleeve edges. 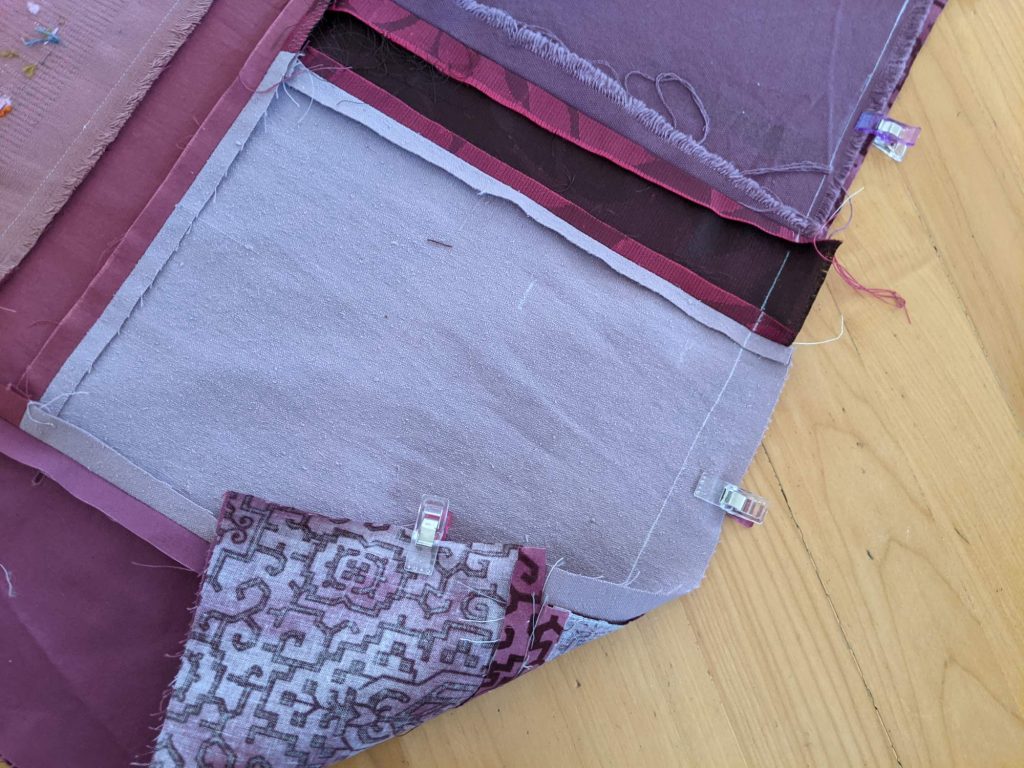 I turned the jacket over so that the layers were wrong sides together, and prepared for the long haul of hand stitching.

For my fall boro jacket, I incorporated Sashiko stitches with some fun patterns. For this one, I decided to stick to straight stitch only, more in line with kantha style.

I selected a variety of threads in matching colors and different weights: 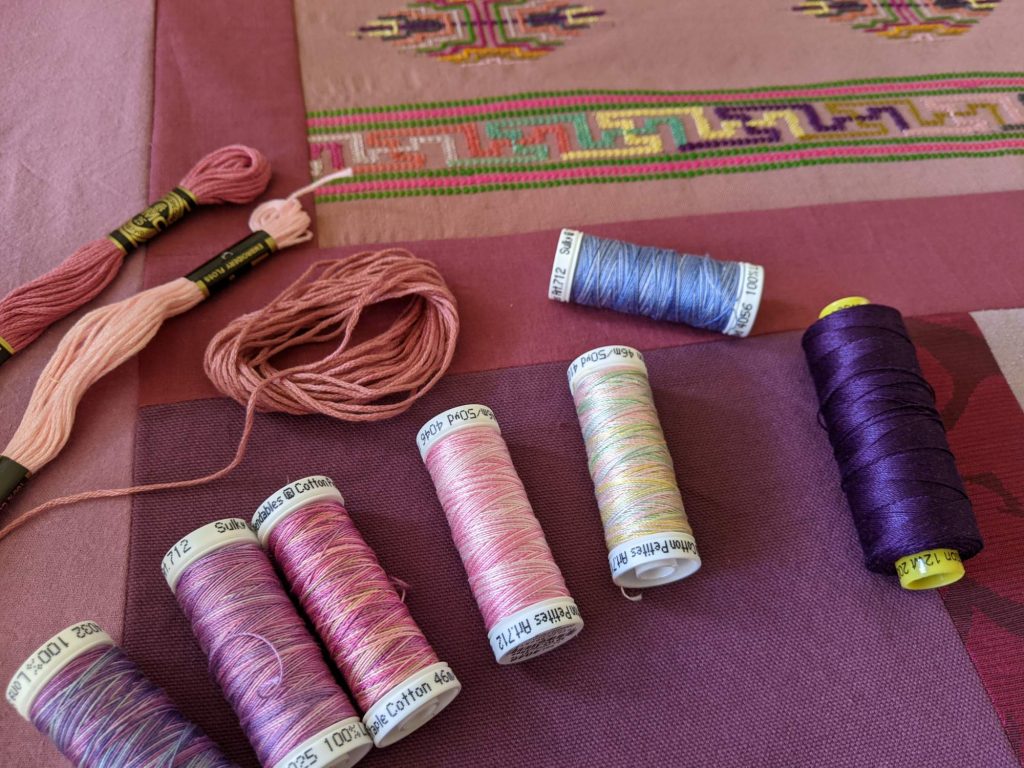 And then sat down for an entire WEEK of hand stitching. I really enjoyed the slow, meditative work, and also had a blast listening to Textile Talks all the while (if you like textiles, you might enjoy listening to some yourself!). I basically stitched the top layer right onto the lining. 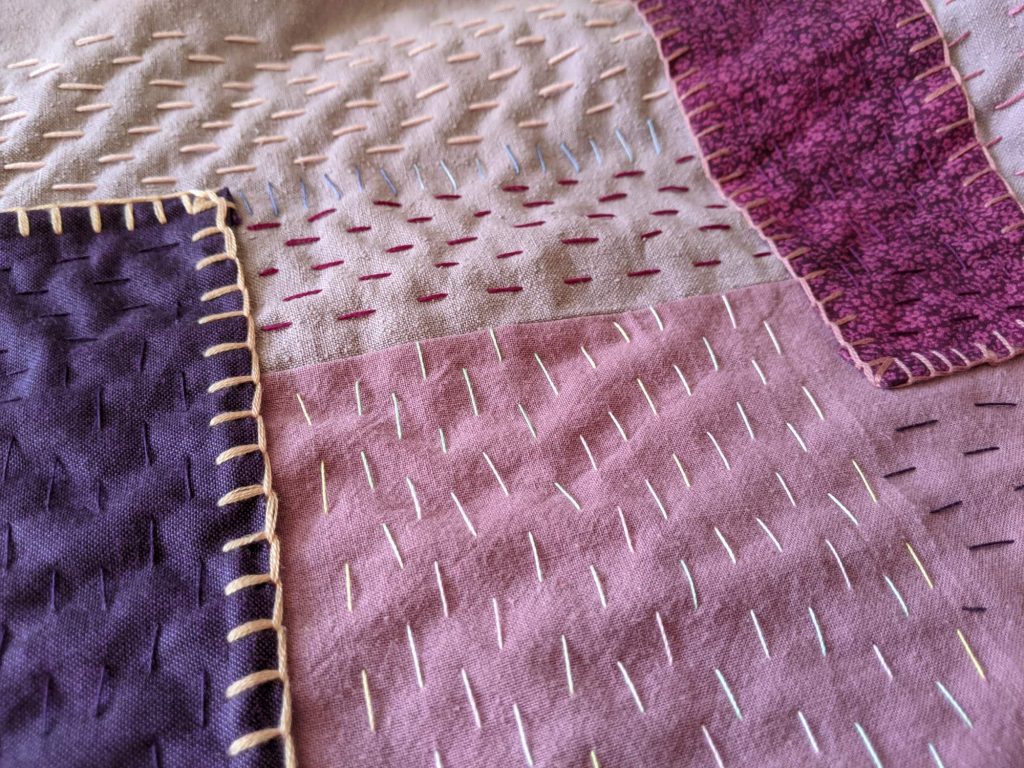 When most of the stitching was done, I folded the jacket to its final shape and stitched the side seams. 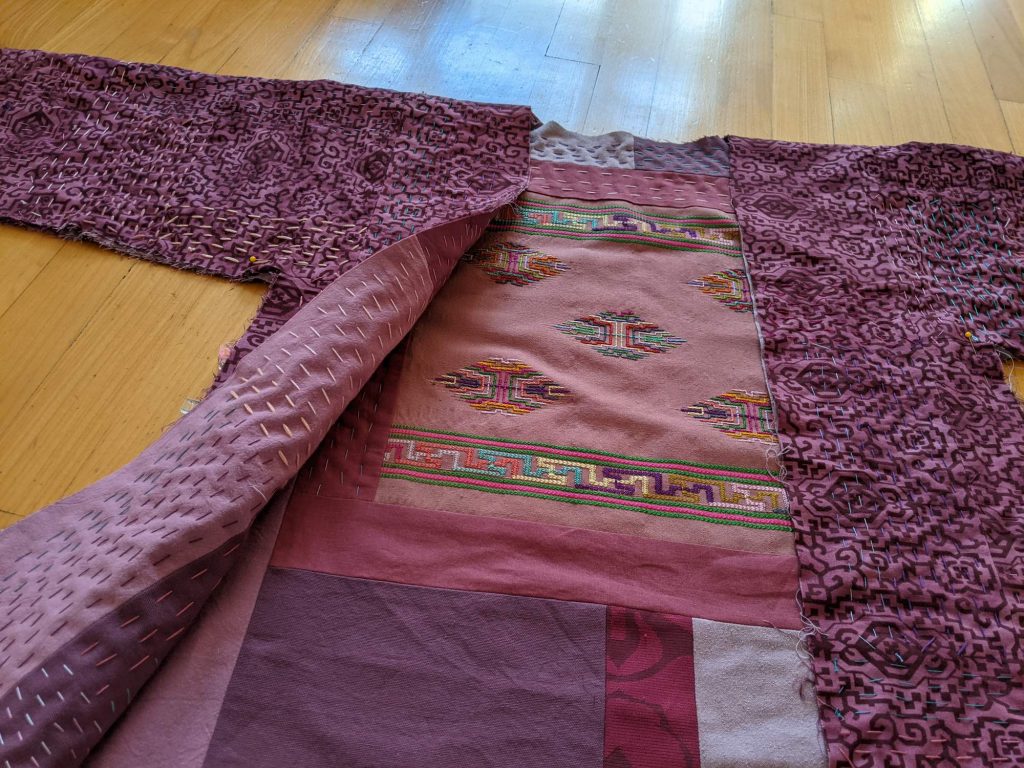 I then folded the bottom hems under, stitched the jacket shut, and attached the scarf as the collar. It took a week and a half start to finish, but the jacket was done! 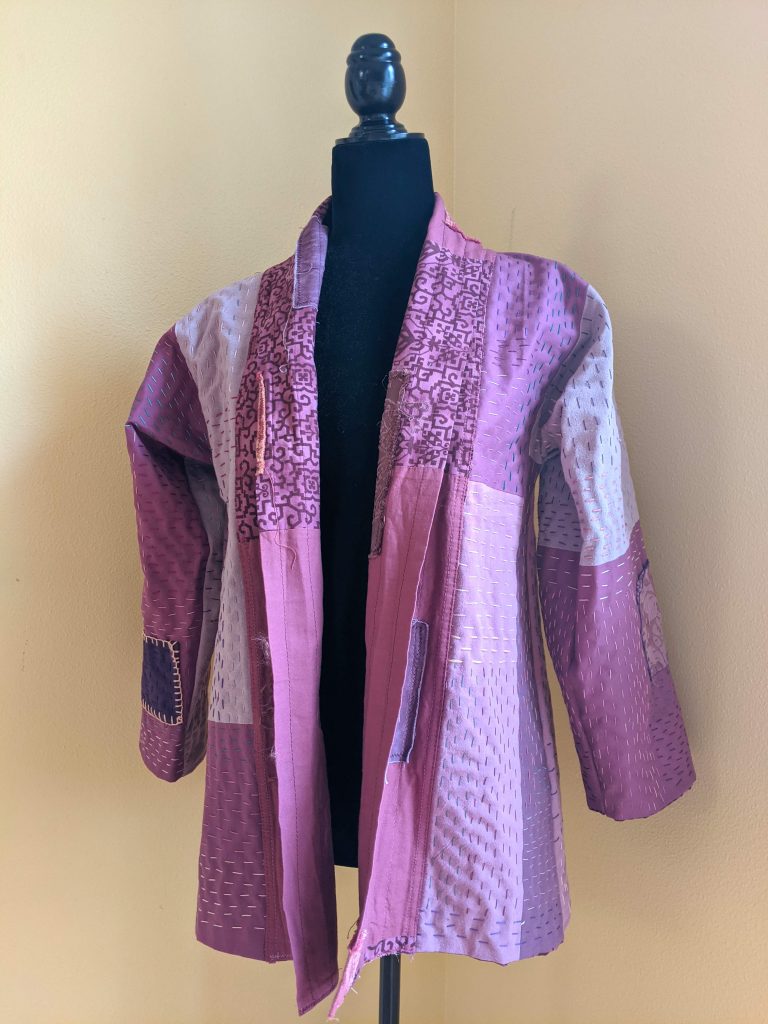 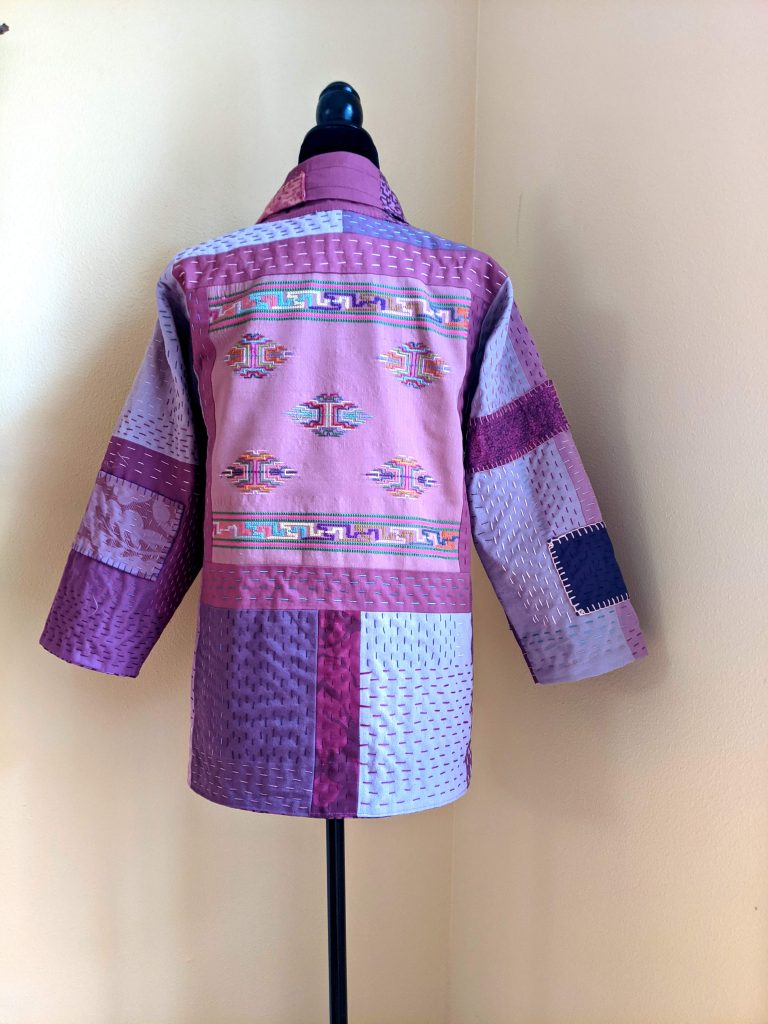 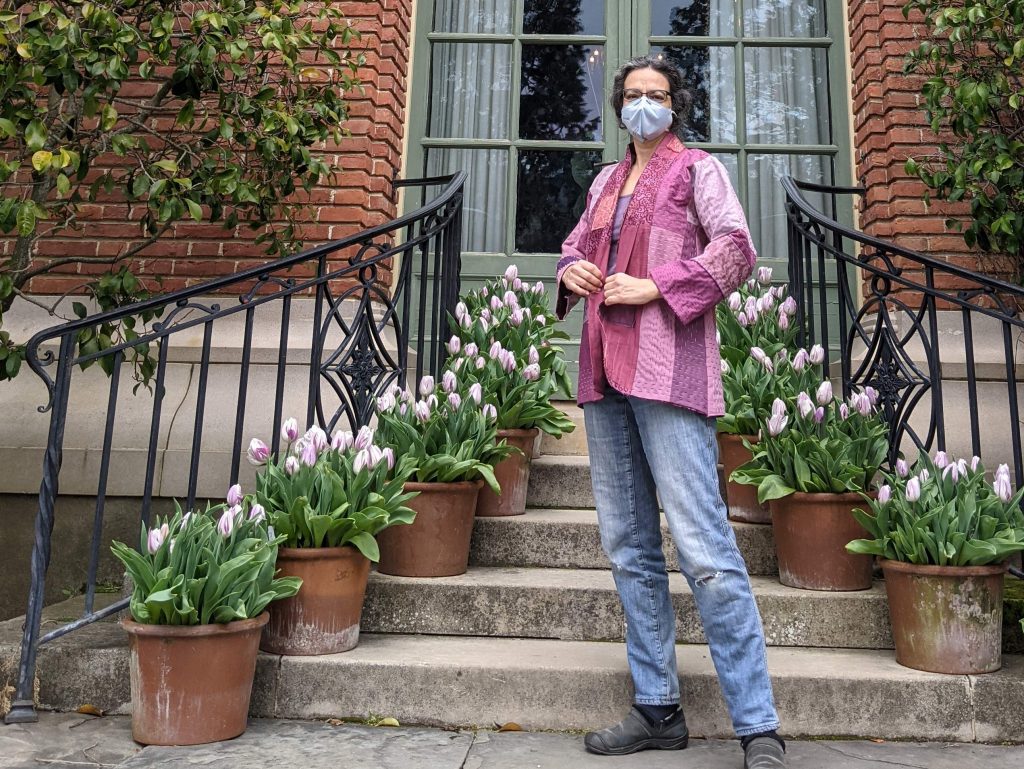 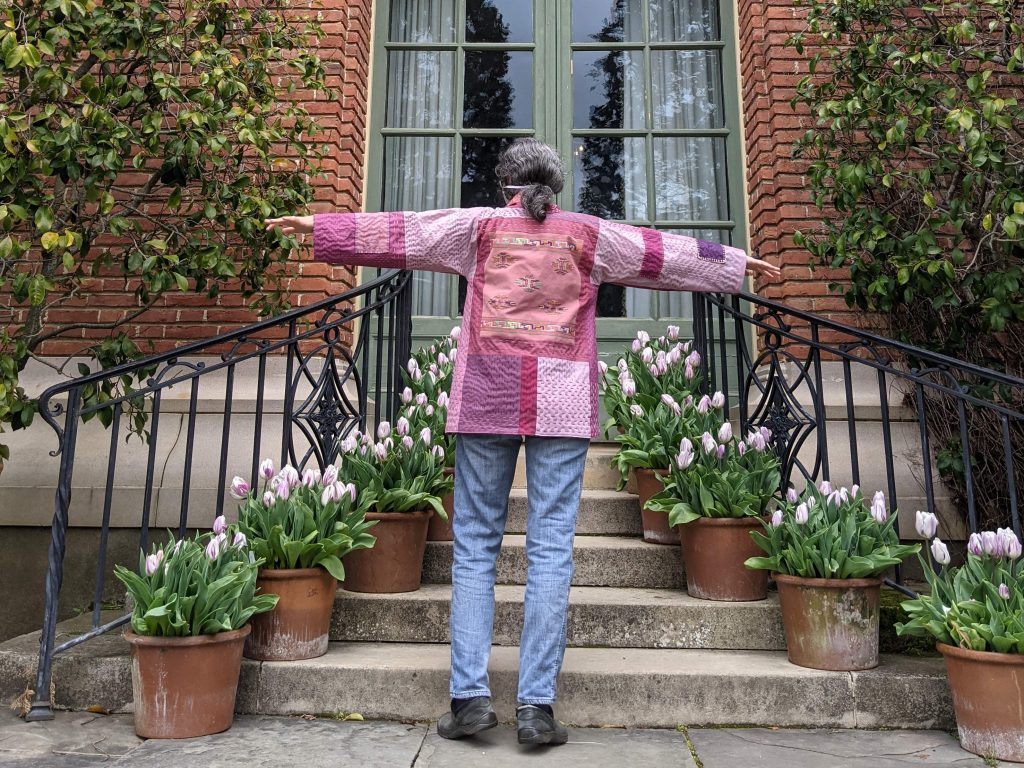 A jacket worthy of spring! 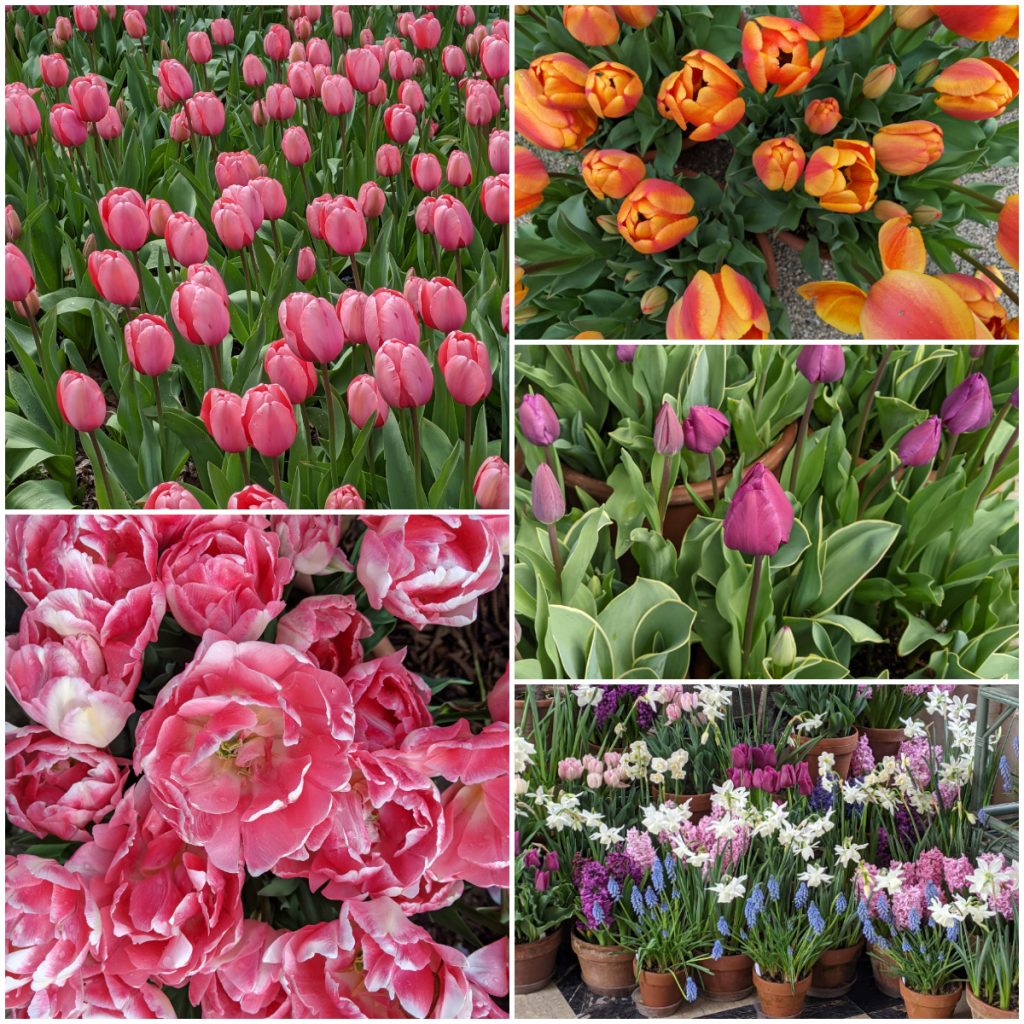 Do you think I did that Bhutanese panel justice?