A Dragon Quilt for My Beloved Boy

I took my first quilting class while pregnant with my first child. Her baby quilt was finished before she was even born. Shortly after she turned one, I made a beautiful album summarizing her first year of life. Then, when she was about four years old and all into princesses, I sewed her a flowing magenta princess cape.

Her little sister got her own cape (but in blue) at the same time. She was barely two years old, and wanted everything her big sister had. Caring for two toddlers didn’t leave me with much free time, however, so my second daughter only got her baby quilt when she was about two and a half and much too big for it. I didn’t get to make her baby album until after she turned three, when my parents came for a visit (giving me some free time).

My third child turned five without getting any of the above-mentioned markers of motherly love. By then he understood what getting the short end of the stick meant, and so he pestered me about it continuously. “When will I get my own cape?” (although he fit into his sisters’ old ones); “when am I going to get an album?;” and “what about MY quilt?”

I suspect he might have overheard me confessing my guilt to whomever was willing to listen, and that his words reflected my own bad conscious. But there is was, nonetheless.

So I finally sewed him his own cape–a knight’s cape, complete with sword and shield. I pieced a baby-quilt background, and took an applique class to learn how to applique the vehicles I wanted to put on it. But I never got to the actual appliqueing… Several months into his kindergarten year, I spent my free mornings combing through his numerous baby pictures, carefully selecting the best ones. For over a month I lovingly printed them, glued them, wrote nice captions beneath them. I kept thinking of how happy he will be to finally have his own baby album.

Then, on his sixth birthday, I asked him to close his eyes and put his arms out. I carefully placed the wrapped album in his hands, holding my breath to see his reaction. He tore the wrapping, glanced at it, and … burst into tears. This was not the birthday gift he wanted. He much preferred a set of Legos…

Needless to say, I never finished that quilt. It still lies buried, to this day, somewhere deep in my Unfinished Project piles… My son doesn’t even like vehicles any more, and yet that quilt has been sitting silent between us, all those years…

A few weeks ago my son, now in fifth grade, came by to show me a drawing he made: 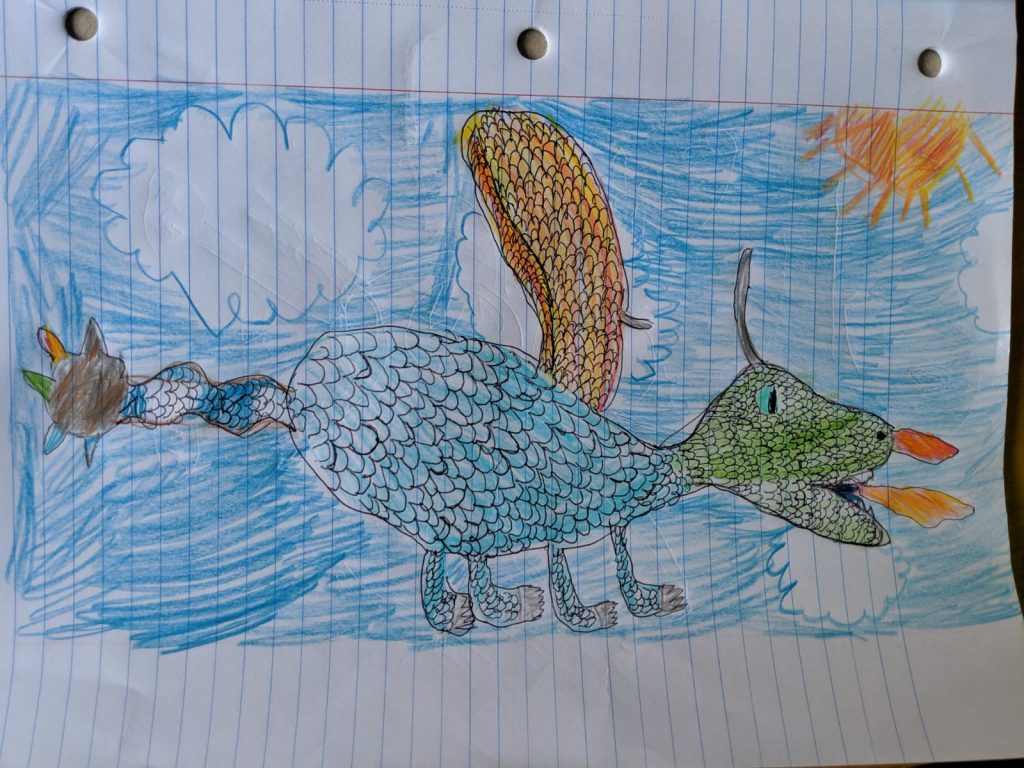 I loved the composition, the lively colors he chose, the meticulous details. I immediately sent a proud picture of it to my mom and siblings.

And then I kept thinking about it, and thinking some more…

Finally, I enlarged his drawing, and printed it on four sheets of paper: 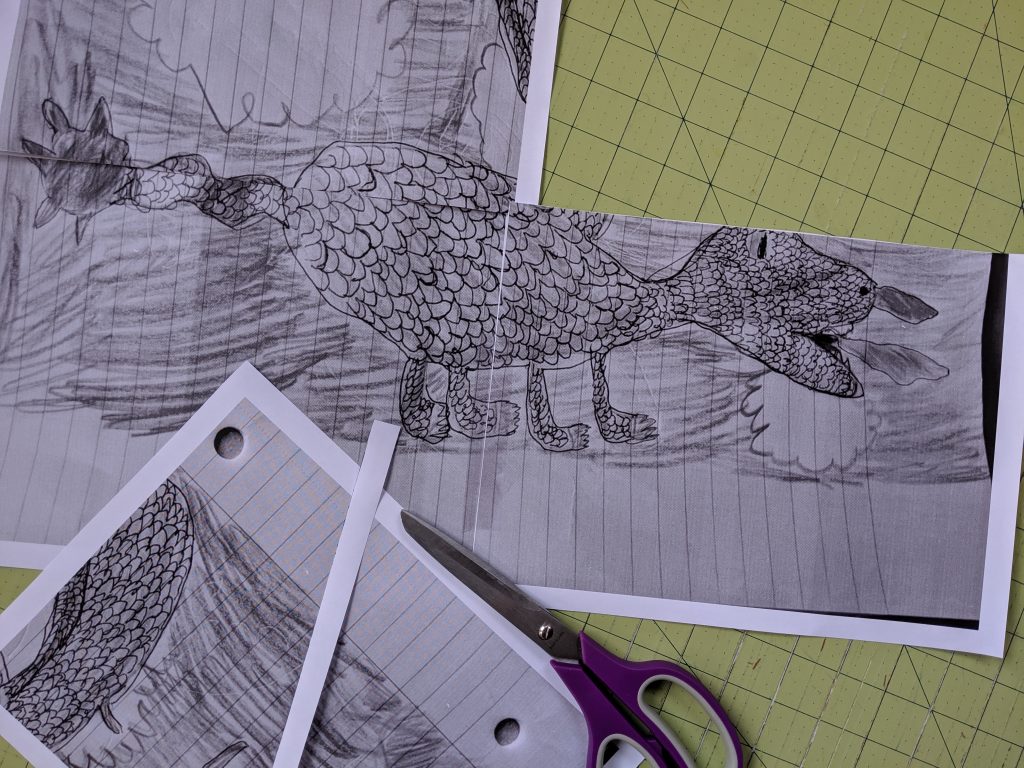 I taped them all together to form a bigger version of his creation: 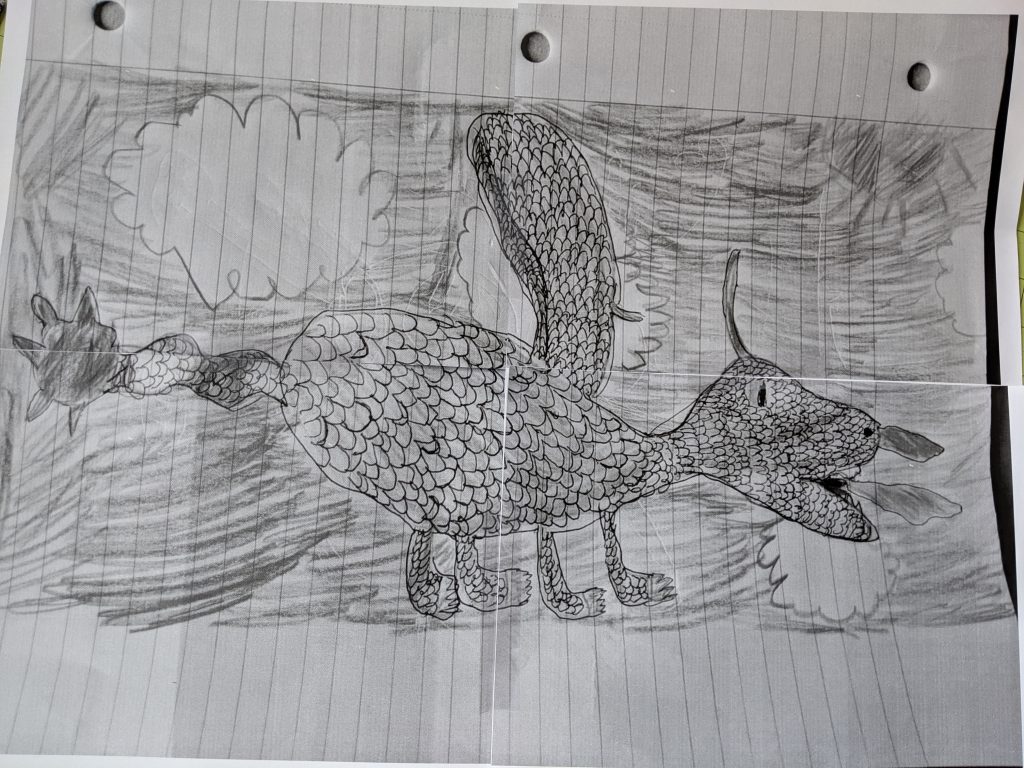 My sewing room is pretty low-tech, but sometimes necessity is the mother of all inventions…  I put the enlarged print against the window, and traced the outline of the drawing’s different parts with a pencil: 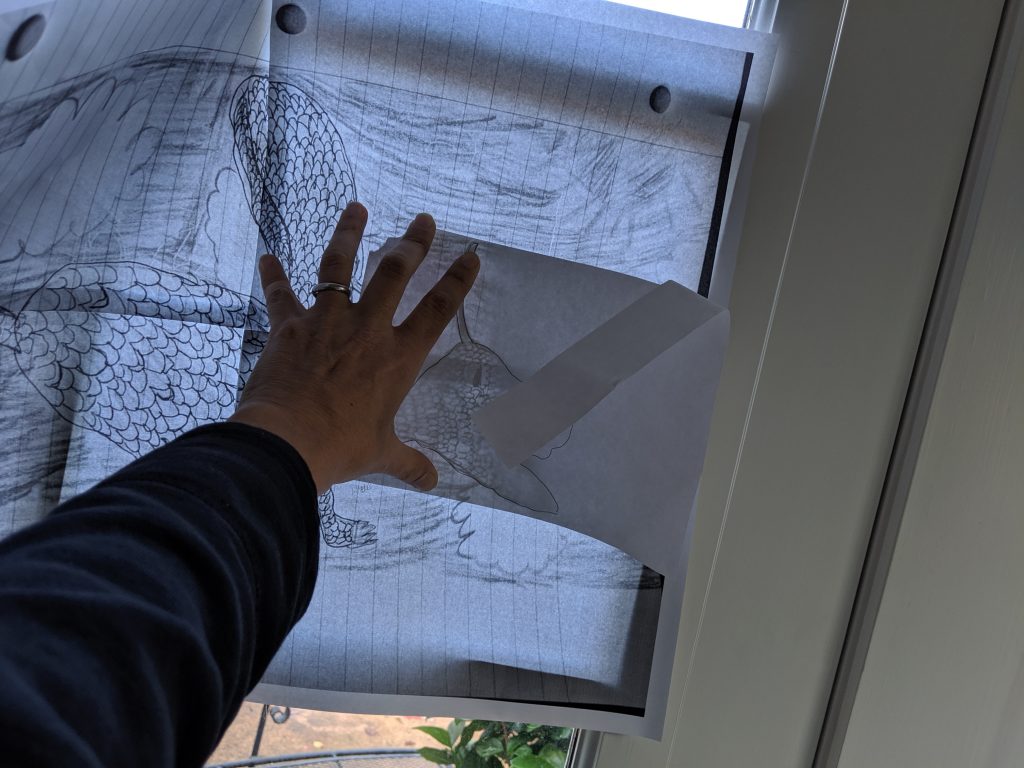 Now I had all the elements separated: 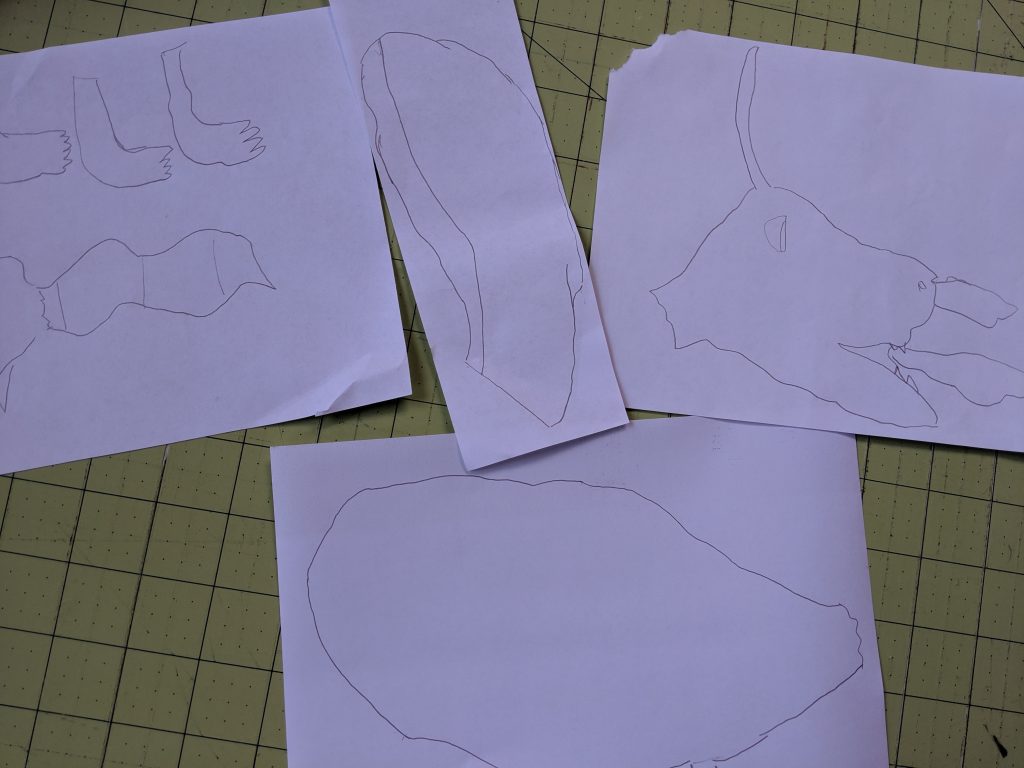 I cut each piece out: 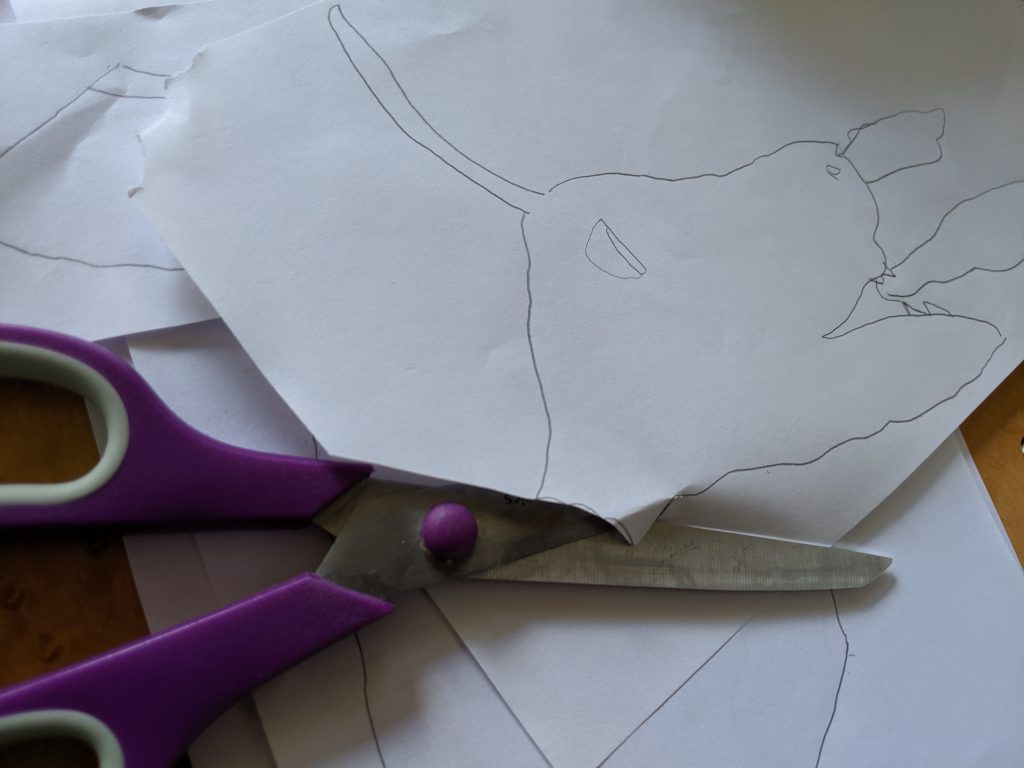 Then, I selected a fabric for the background. I had several light-blue swatches that seemed perfect, but they were all too small. There were less options among my bigger pieces, but I finally found something suitable. I went on to choose additional fabrics from my scrap boxes in colors matching his work (they do come handy, those scraps!): 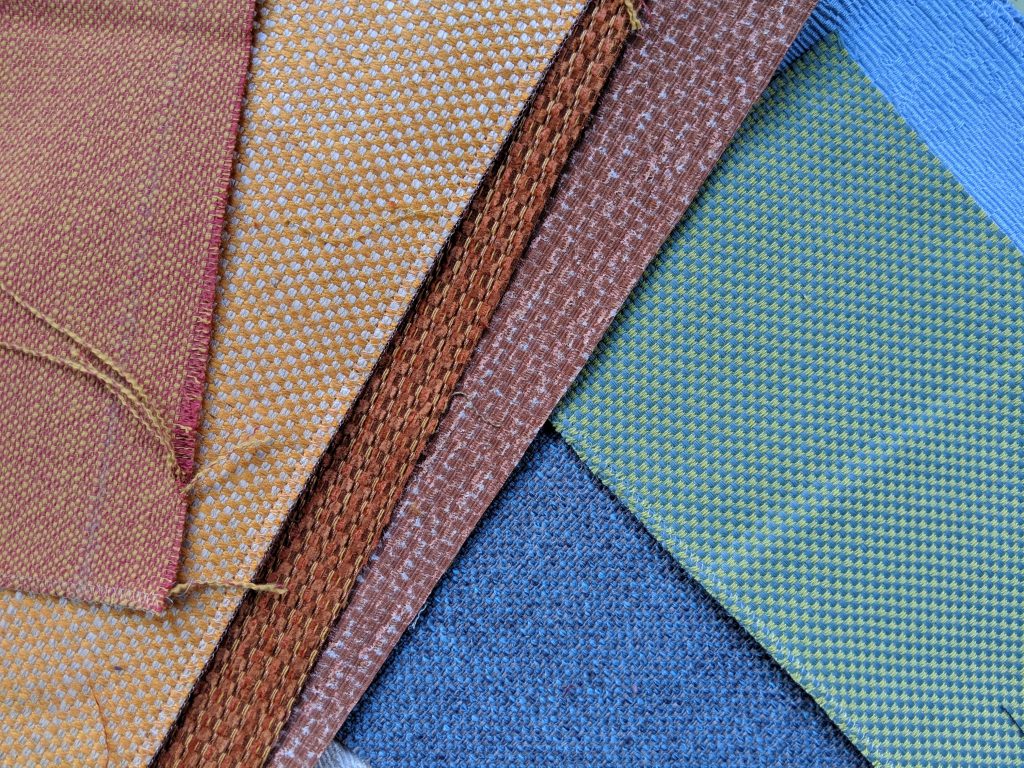 Putting the paper outlines on top of the fabrics, I carefully cut the pieces out: 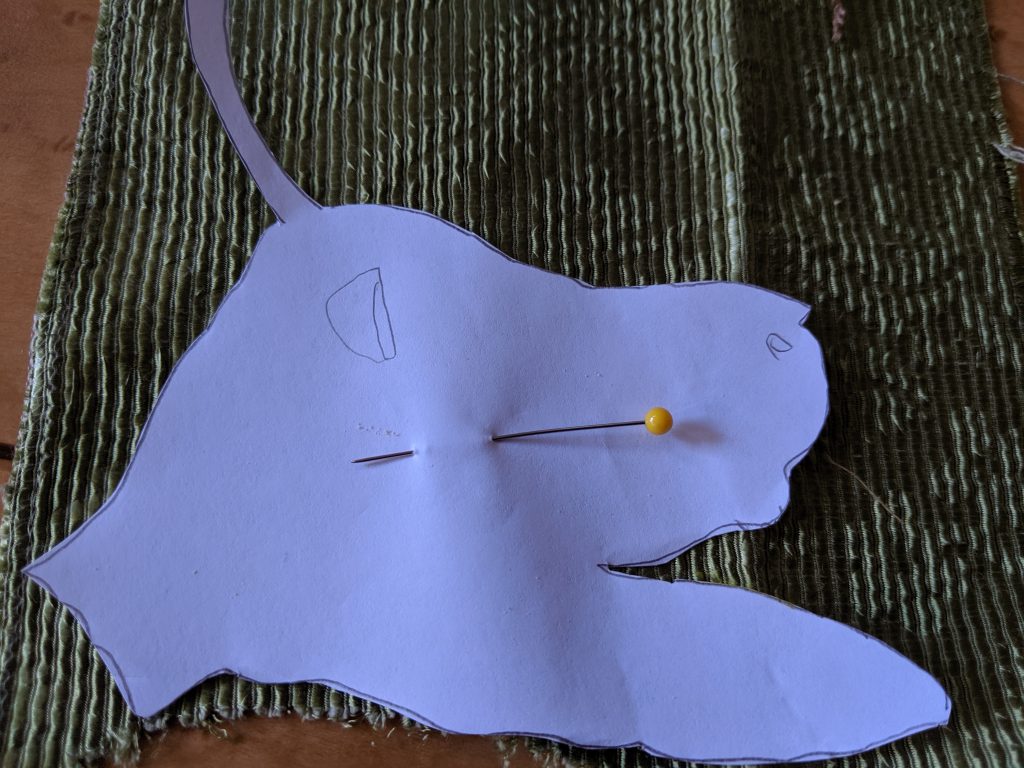 I laid them all on the background fabric, then pinned them down: 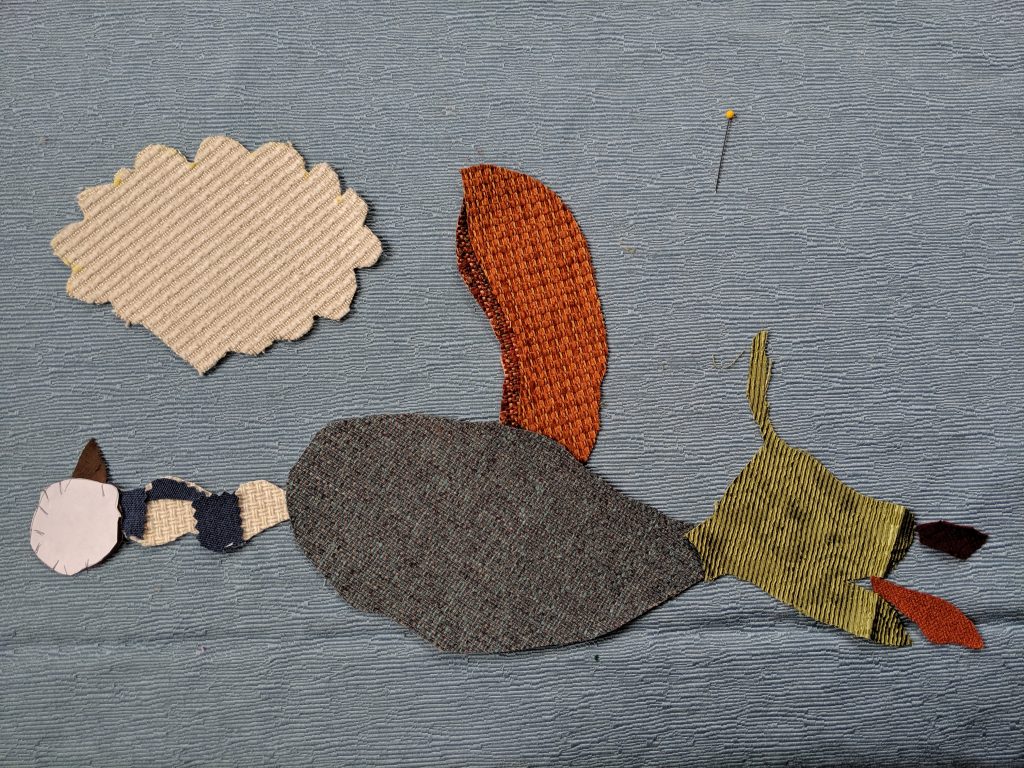 Two of the clouds proved problematic: the cloud behind the wings, and that behind the head. Somehow, they just didn’t look right when translated into fabric. So I exercised some artistic freedom and moved them elsewhere…

I zigzagged all around the pieces, using black thread to mimic the drawing’s outline: 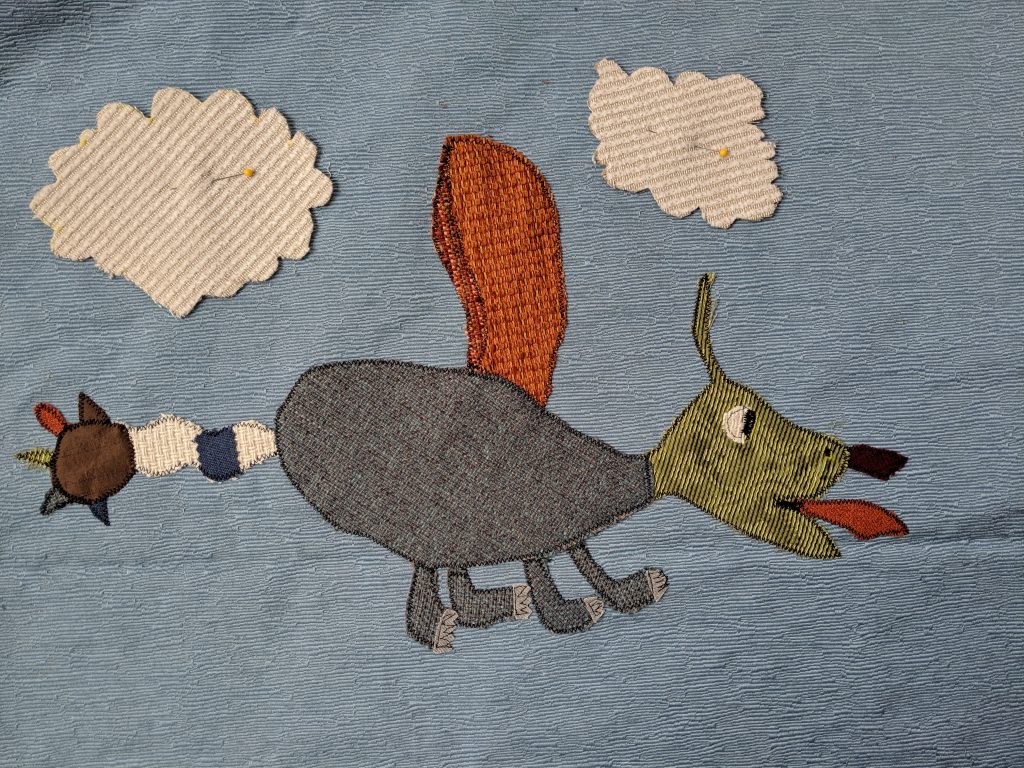 Then came the exciting part… When my son was a baby, I once took a free-motion quilting class. That was very long ago. I wasn’t good at it then, and I haven’t practiced since. In fact, I haven’t even used my free-motion foot in all those years, and barely remembered where I put it. But now I had to fish it out and use it to draw the scales. So I did. 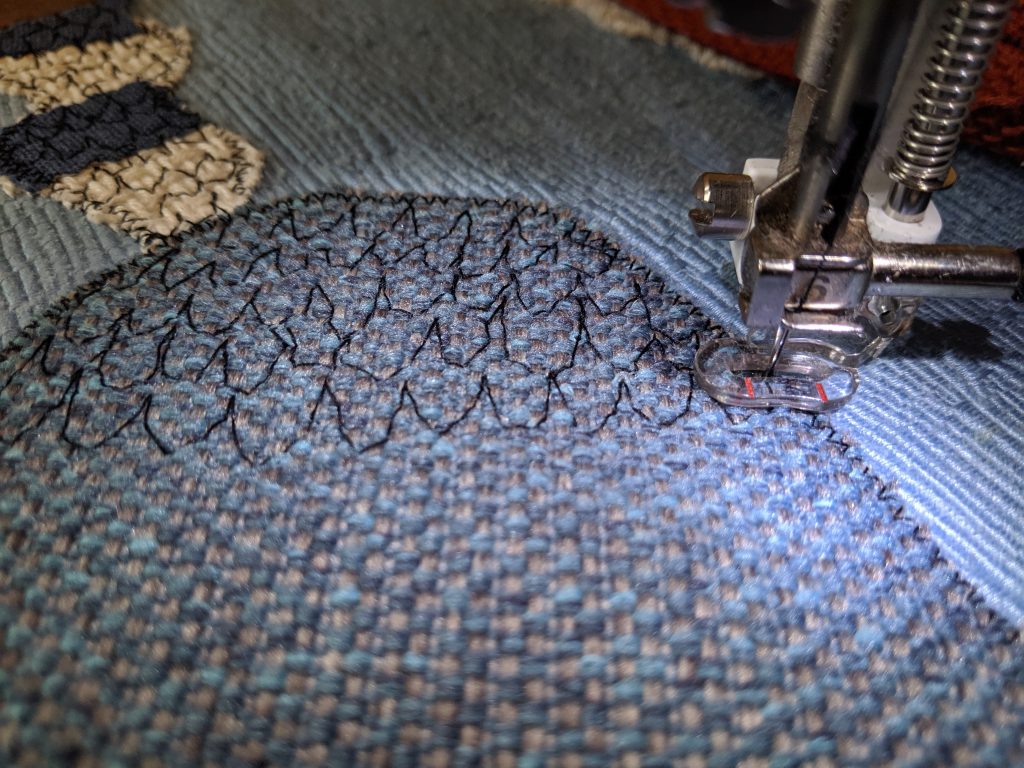 It was nerve-wracking. I was so tense, that my arms started shaking after a while. But I kept at it. I put scales on the tail, on the body, on the head. Even on the legs. But I decided to leave the wings unscaled, diverting from the original drawing, because the fabric I used already looked scale-like. I was pretty happy with the result, and quite proud of myself, too! This is how it looked from the back: 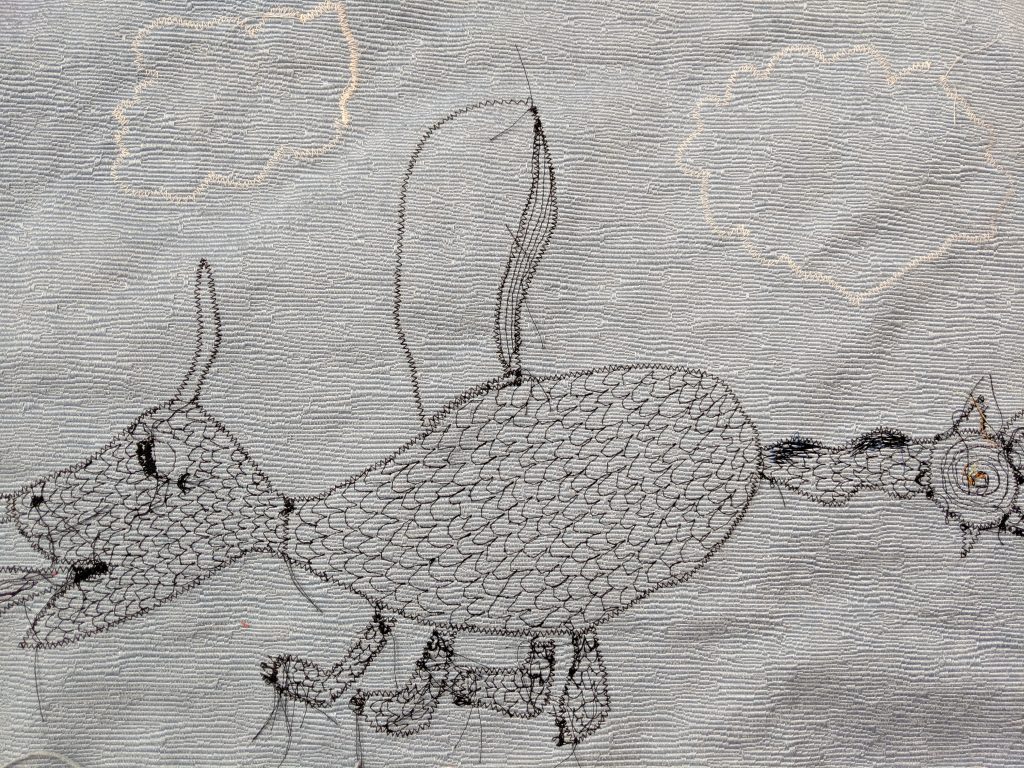 I decided to add a border, since the blue alone looked too pale against the wall. My son loves red, and red matched the fire. So I added a red frame. I sandwiched the quilt, using a checkered fabric for the backing: 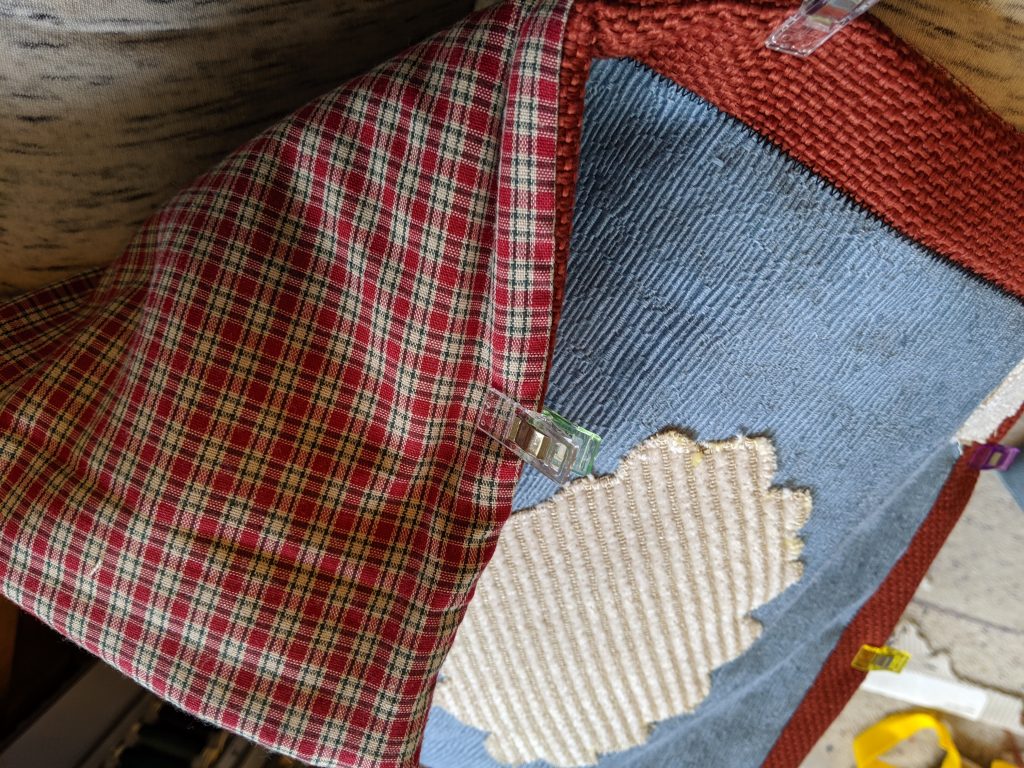 Then I started quilting. I used wavy horizontal lines to quilt the background since they gave it a bit of movement, and also somewhat mimicked the lines of the folder paper my son originally used. Finally, there it was: a dragon quilt for my beloved son! 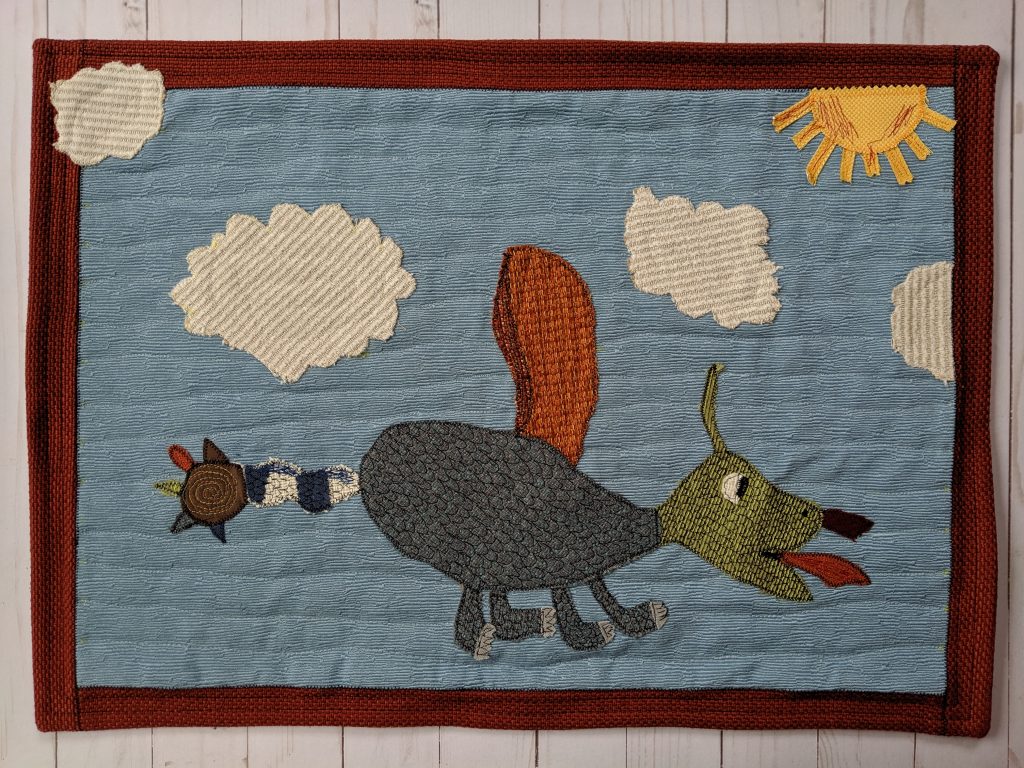 At first, I though I’ll wait until my son’s birthday to give it to him. Turned out I was too excited for that… So I decided to give it right away instead, as an early birthday gift. I could hardly wait for my son to come home from school. When he finally did, I asked him to close his eyes and put his arms out. I carefully placed the quilt, back-side up, in his hands. My heart was pounding hard. I didn’t know what to expect. I held my breath…

For a split second I felt like a magician, with textile art as my magic. How did I do it indeed?

My son ran to his room and brought his original drawing. He put the two side by side, drawing and quilt, and looked them both over. 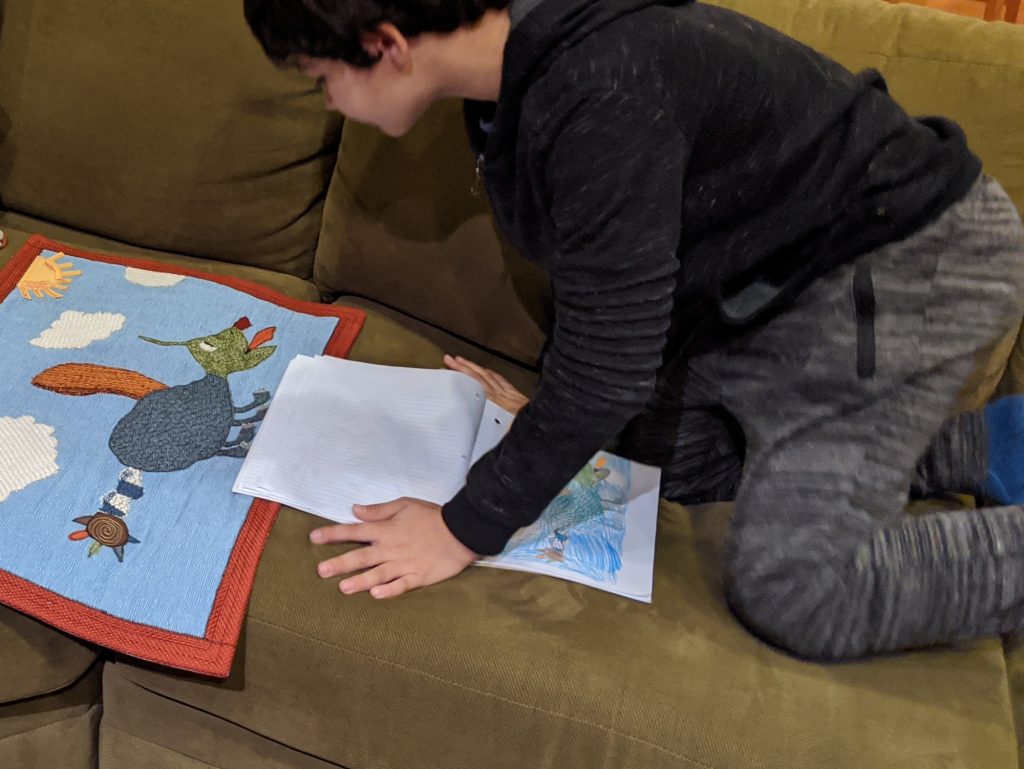 My work passed the test. He absolutely loved it! 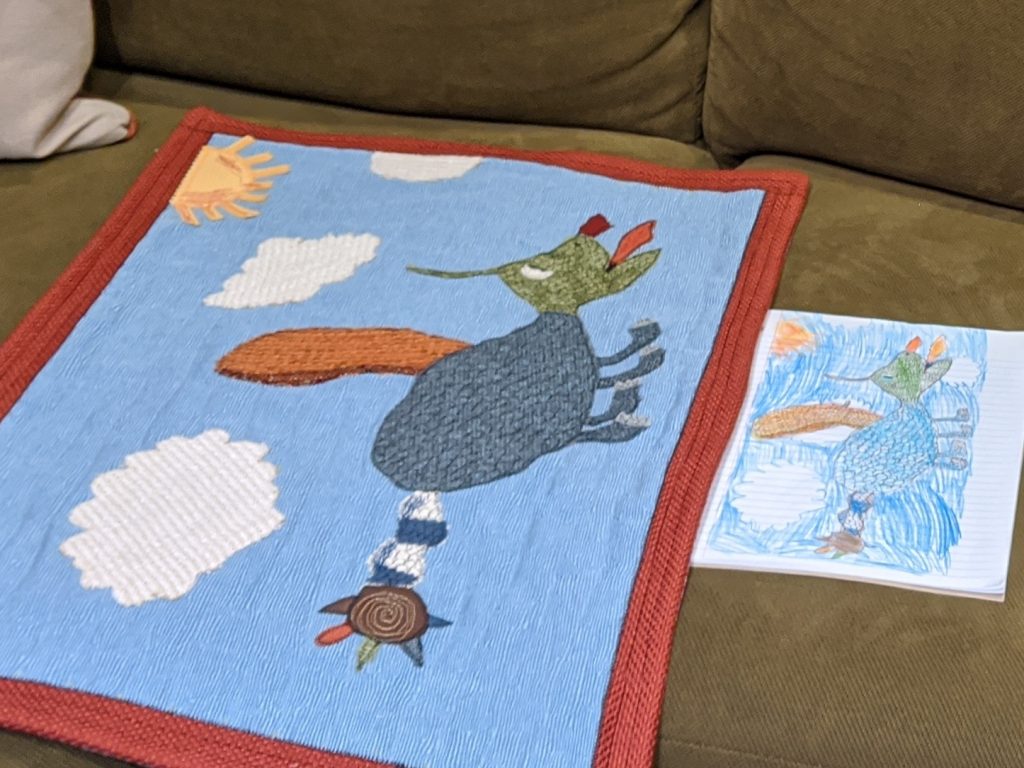 And me? I loved being a magician, if only for a little while…

10 thoughts on “A Dragon Quilt for My Beloved Boy”