My Father’s Sukkah: On Textiles, Reusing and the Creation of Traditions

Wednesday night marked the beginning of the week-long Jewish holiday of Sukkot (Feast of Tabernacles or Feast of the Ingathering). The holiday celebrates the end of the agricultural year, and also commemorates the Exodus from Egypt. My father’s sukkah celebrates all of that and then a little more.

When the Temple still existed, Sukkot was one of three pilgrimage holidays. At that time, people from all over the Holy Land used to make their way to Jerusalem during Sukkot, bringing with them harvest to the Temple.

After the destruction of the temple, Jews started celebrating the holiday by building sukkot (plural for sukkah), or temporary huts. We eat, pray, and sometimes sleep in them for the duration of the week. These huts–built to remember both the temporary structures our ancestors slept in during their forty years of wandering through the desert, and the huts farmers built in the fields during the harvest–usually have wooden frames covered with sheets of cloth. Their roof is covered with plant material, usually palm leaves, and is called a schach.

Nowadays, many people buy a sukkah kit online. It arrives ready to assemble, and is usually made of synthetic materials. Once the holiday is over, it easily comes apart, folded and stored for next year. But that’s not the way sukkot were built when I was a kid. Then, everyone had to build their own sukkah from scratch, every year anew.

Of course, some parts of the sukkah could have still been saved from one year to the following. The wood planks, for example, or the cloth coverings. In the case of my father’s sukkah, some of the materials were passed down in the family for much longer than that.

This is my father’s sukkah: 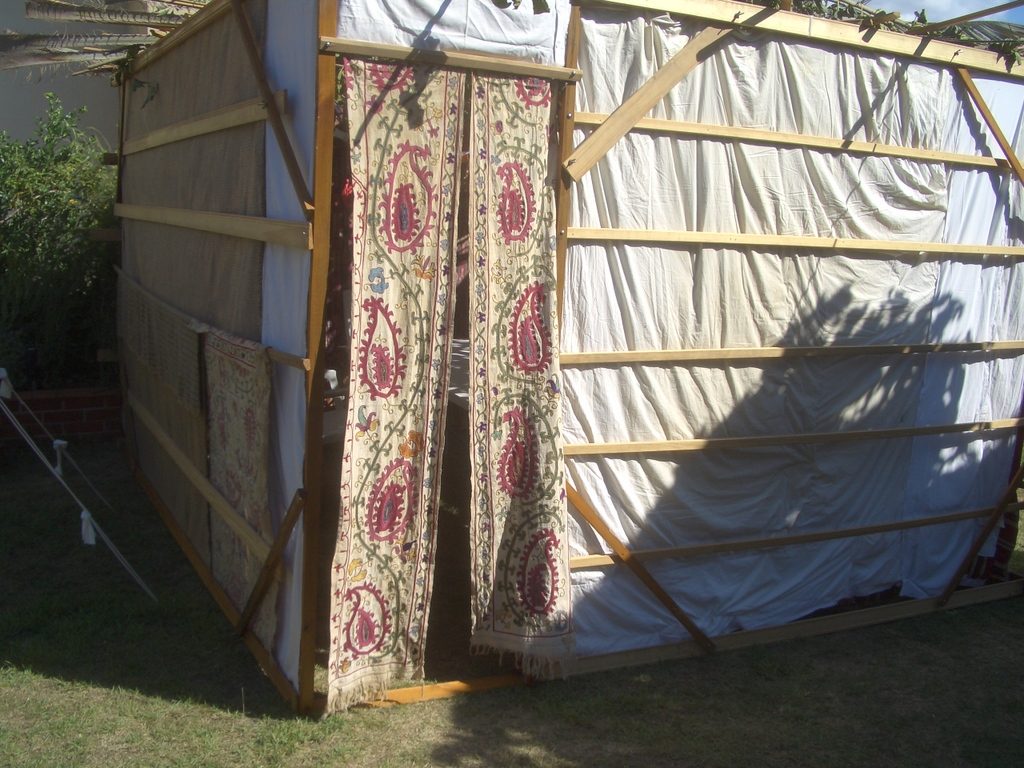 The outside materials are relatively new, but not so the cloth inside. These inside textiles were already hanging in my father’s grandfather’s sukkah in the 1930’s and before. 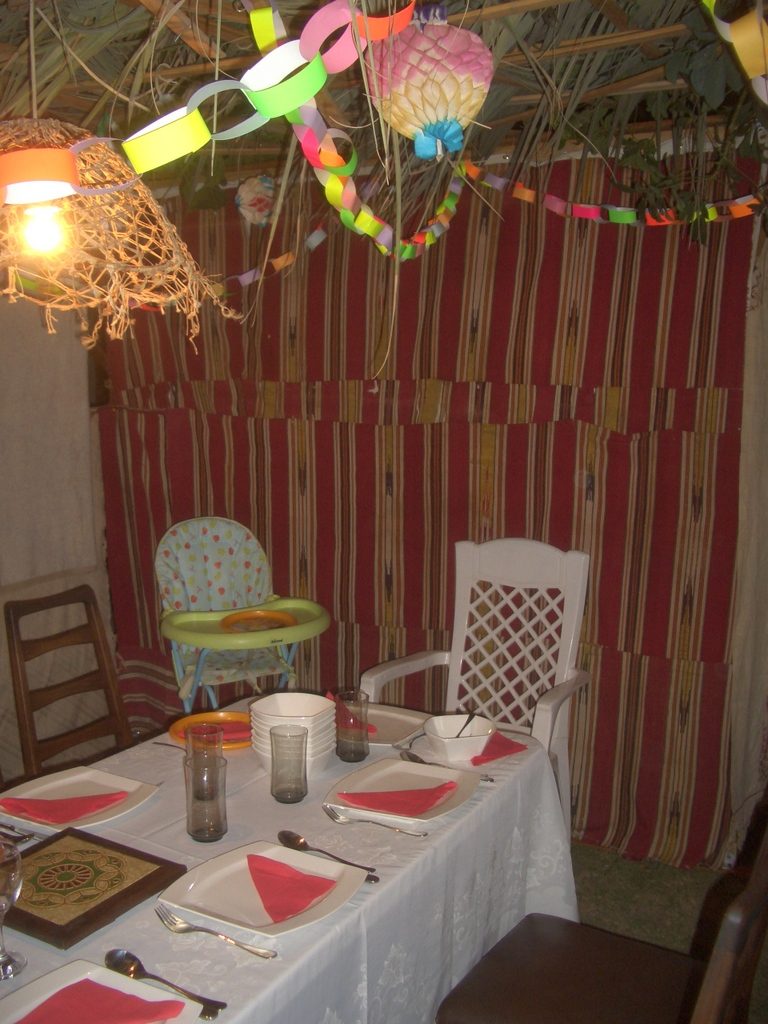 Originally, my great grandfather, Haim, and his wife, Gele, had other uses for these fabrics. My great grandparents used these as curtains and table cloths in their home in Jerusalem, in one of the first Jewish neighborhoods built outside the walls of the Old City. After many years of use, when these textiles lost their original luster and became faded or stained, my great grandparents turned them into sukkah walls. 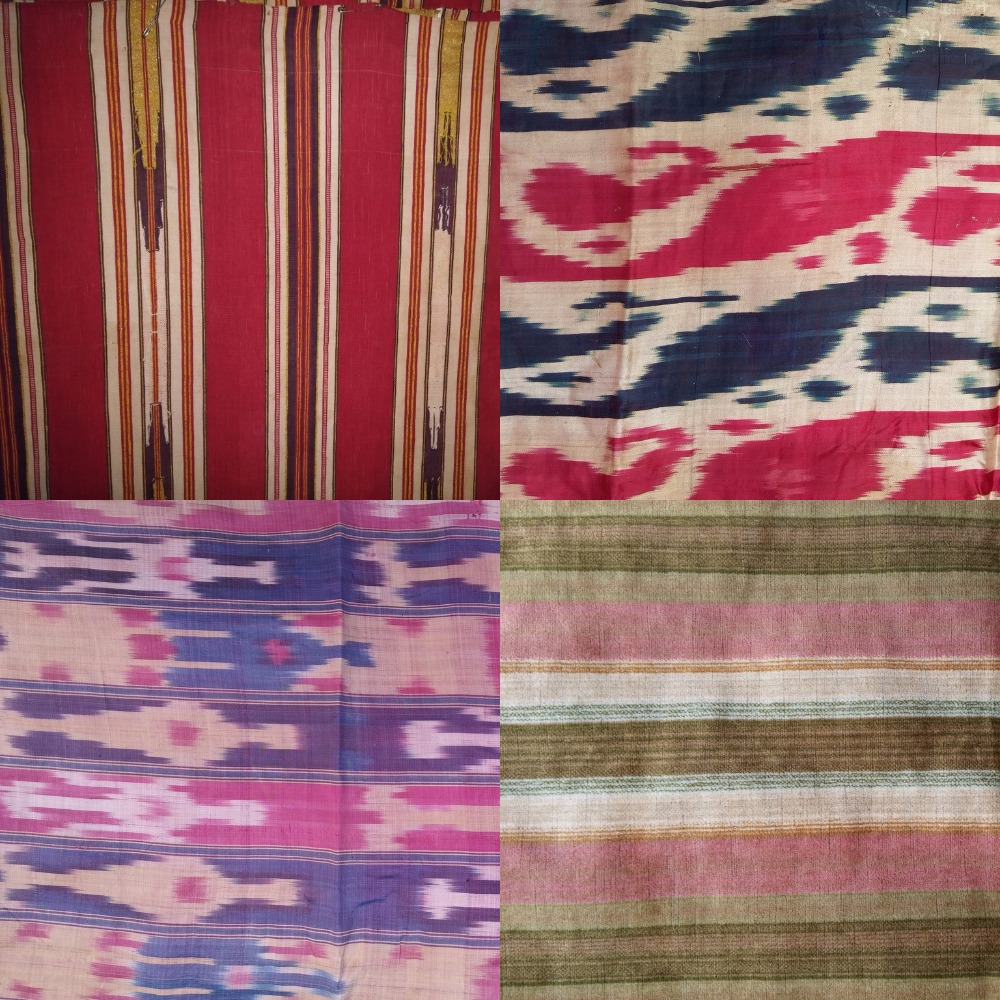 While many of these fabrics are still beautiful and lively, one stands out as being really special. Someone, you see, meticulously hand-embroidered the fabric strips serving as the sukkah “door.” 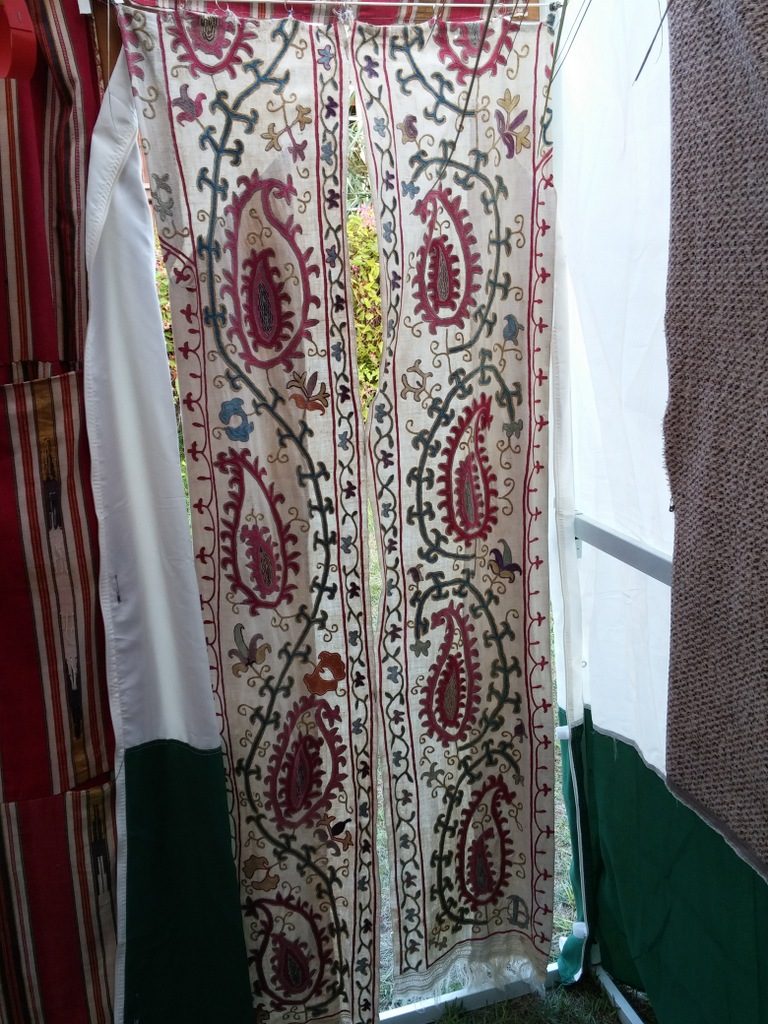 My father thinks, but is not sure, that the delicate embroidery was the handiwork of his aunt Hannah, Haim and Gele’s daughter, who was a talented embroiderer. I can only imagine how many weeks (or months!) it took her to embroider this piece!

For us, children of a mass-manufacturing, cheap-goods materialistic culture, up-cycling, recycling and reusing are fashionable buzzwords. But not that long ago reusing was a way of life. Less than a hundred years ago, materials and objects were expensive. Things were well-made and pricey. People valued items, used them with care, and re-purposed them whenever possible. They also passed things down from one generation to the other.

Thus, Haim and Gele re-used old curtains and table cloths, turning them into sukkah walls. When, in the early 1930’s, they moved from Jerusalem to Tel Aviv to live near two of their grown sons and their families, they brought their sukkah materials with them.

Between holidays, my great grandfather Haim saved his sukkah materials in his attic (“boidem”). He stored the wood, and also the textile wall coverings. Every year, once Yom Kippur (Day of Atonement) was over, he, his sons and his grandchildren would start building their sukkah.

They treated the old cloth with care. They nailed these inside textiles to the wooden frame with upholstery nails. Before nailing, the grandchildren prepared squares of cardboard, usually from empty cigarette boxes, to put on each nail. They did so to make it easier to pull the fabrics out at the end of the holiday without tearing them.

On the eve of the holiday, Haim would come home from the synagogue with a poster of the ushpizin: images of the patriarchs: Moses, King David, and the like, and pinned it in the center of the wall opposite to the “door”. As far as my father remembers, this was the only decoration in his sukkah.

My father continues to use his grandfather’s textiles in the sukkot he builds himself, year after year, with his own children and grandchildren. Unlike his grandfather, my dad decorates his sukkah with artwork of his offsprings. I myself made the lampshade in the above picture when I was eleven. My nephews made the paper chains. My father carefully preserves not only his grandfather’s textiles, but also his children’s and grandchildren’s art. His sukkah, therefore, has more decorations as the years go by.

The sukkah textiles are now almost one hundred years old, yet still serve their purpose. They witnessed at least five generations of our family, and hopefully will see more to come. The fabrics enclosed ancestors I never knew in person, distant relatives who died before I was born. They created a holiday-sacred space for tens of relatives and guests, for eating, praying, talking, laughing, arguing and sleeping.

Somehow, I feel, they preserve some of the spirit of these long-gone people who lived, for one week each year, in-between them. The people who made them, the great-aunt who embroidered them, the great-grandparents, uncles, aunts and cousins who hung them, handled them, folded them, then stored them with care year after year. By serving as sukkah walls, these textiles, of course, help pass down the traditions of the holiday. But, by passing down from one generation to the next, they also tell the story of our family. In a way, they help create the story of our family. They are both a part of a tradition and the makers of new traditions.

That, I think, is something that synthetic, disposable sukkah kits could never do.

Tags:familyholidayslifememoryMy fatherSukkot
previousHow Fabrics Are Made: From thread to Textile
nextThe Amazing Story of FabMo: How Two Dedicated People Can Make a Big Difference