When Buying Art Can Change the World

A few weeks ago my eldest daughter, a couple of friends and I were walking back home from a crafts fair in our neighborhood. That day I went to the fair twice. The first time, in the morning, was with my second daughter. She happily spent the Fair Budget I gave her on a nice pair of earrings. I returned again in the afternoon with our friends and my eldest child. I wanted to to give her, too, a chance to find something. We enjoyed the walk, the browsing, the inspiration brought about by exploding creativity. We likewise enjoyed the festive atmosphere and the crowds. But my daughter couldn’t find anything she really wanted, and so we left the fair and started walking back home empty-handed.

A couple of blocks from our house I noticed from the corner of my eye a little booth in one of the front yards. A homemade sign announced “Nail Art” in big, lopsided letters. A child-sized table stood diagonally, and behind it sat a young boy, about nine or ten years old. Deeply engaged  in conversation, I didn’t pay the booth much attention. I kept walking, wishing to get home and share a cup of coffee with our friends.

We walked another half block when my daughter suddenly stopped. “We should go back to that booth,” she said. “That boy looked so sad. We really should buy something from him.” I hesitated. We already spent a lot of time at the fair. I was looking forward to my coffee, and our friends, an elderly couple, looked like they had had enough walking for the day. But my daughter, kindness incarnate, insisted. “Remember how I felt when I had a booth?” she asked, referring to a time, only a couple of short years earlier but feeling oh-so-long-ago, when she, on exactly such a fair weekend, set a similar booth in our own front yard. I did remember.

So all four of us turned around and returned to the booth. I asked the boy how much his paintings cost, expecting him to announce a small sum, similar to what my daughter asked for her creations two years before. When he came up with what amounted to ten times that, I was taken aback. Our friends were aghast. But my angel-of-a-daughter wasn’t deterred. “Oh, come on mom, buy one,” she said. “Use the money you promised me for the fair.” And so I did. My daughter chose a painting of a rainbow-colored heart and I handed the money. 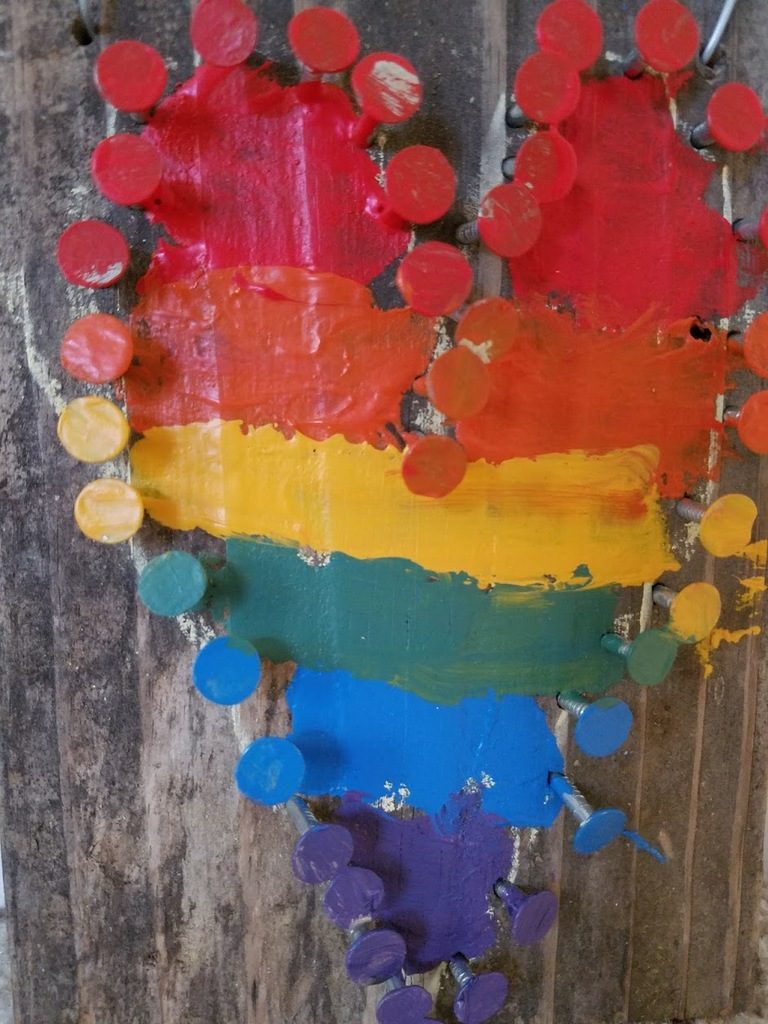 The boy stared at the bills in disbelief. It was obvious that he did not expect to get what he asked for. We were probably his first customers, too. After a second, an expression of pure joy washed over his face. His mother, quietly protecting him from the porch, rushed out to thank us.

Now my daughter has a rainbow-heart painting hanging in her room. Whenever I pass by it I can’t help but simile. I probably read into the piece more than the artist had intended, but what I see is cheerfulness, hope, innocence, love and  inclusiveness–all elements we badly need in these times of ugliness and divisiveness.

Whenever I see the painting I think of that boy and of his mother. I hope that by buying it we made a difference. Perhaps we taught the boy that expressing creativity is worthwhile; that overcoming hesitation, nervousness and fear pays off. Maybe we showed him that taking risks is OK, that aiming high might lead to unexpected results, and that he should never sell himself short. Hopefully we helped him realize that working hard pays and that earning one’s own money based on hard work feels good. Perhaps the experience will help him grow up into an adult who isn’t afraid to work hard, take risks, and later contribute back to society.

Hopefully our gesture also demonstrated to his mother, as I was reaffirmed two years before, that community is indeed important; that it really does take a village to raise a child; and that even as strangers we are all connected in an unseen web of humanity, and are willing to support each other just because.

Equally important, the money I spent that day bought my daughter and me a lot more than just a small, pretty painting made of wood, nails and paint. It bought us the satisfaction of seeing otherwise-discarded materials turned into something beautiful. The money bought us the great delight that comes with supporting the efforts of another human being. It gave us the enormous bonus of seeing joy and happiness on other people’s faces, hence allowing us to feel the same way ourselves–the expressions on the faces of both the boy and his mother were truly priceless!

That money also bought us the contentment that comes with investing in the future: the future of one boy, his community, and perhaps the world. For who knows what investing in one child, any child, might bring? Somehow, it might change the world one day, in big ways or small. It might even contribute something to making our society kind again. I call that money well spent.

0 thoughts on “When Buying Art Can Change the World”