I dedicated January of this year to working on my unfinished projects. If you’ve been following me for a while, you might recall that the majority of projects in my UFO pile were totes. Twenty three totes, to be precise (out of 58 UFOs). Three of those were patchwork totes, but each was different than the others.

A few years ago, early in my bag-sewing adventure, I started experimenting with piecing upholstery fabrics as if they were quilting cottons. As a part of that experiment I created two patchwork panels, which I intended to turn into messenger bag flaps. The experiment didn’t go very well. Home décor textiles, it turned out, were nothing like quilting cottons, and piecing them was more difficult and time-consuming than I expected. My experiment started and ended with these two pieces.

Shortly afterwards, I stopped making messenger bags. The two pieced pieces went straight into my UFO pile, where they lay for years. A couple of years ago, a good friend visited me and braved the mess in my sewing room. She saw these pieces and suggested that I combine them into a tote instead. It took a while longer, but I finally did. 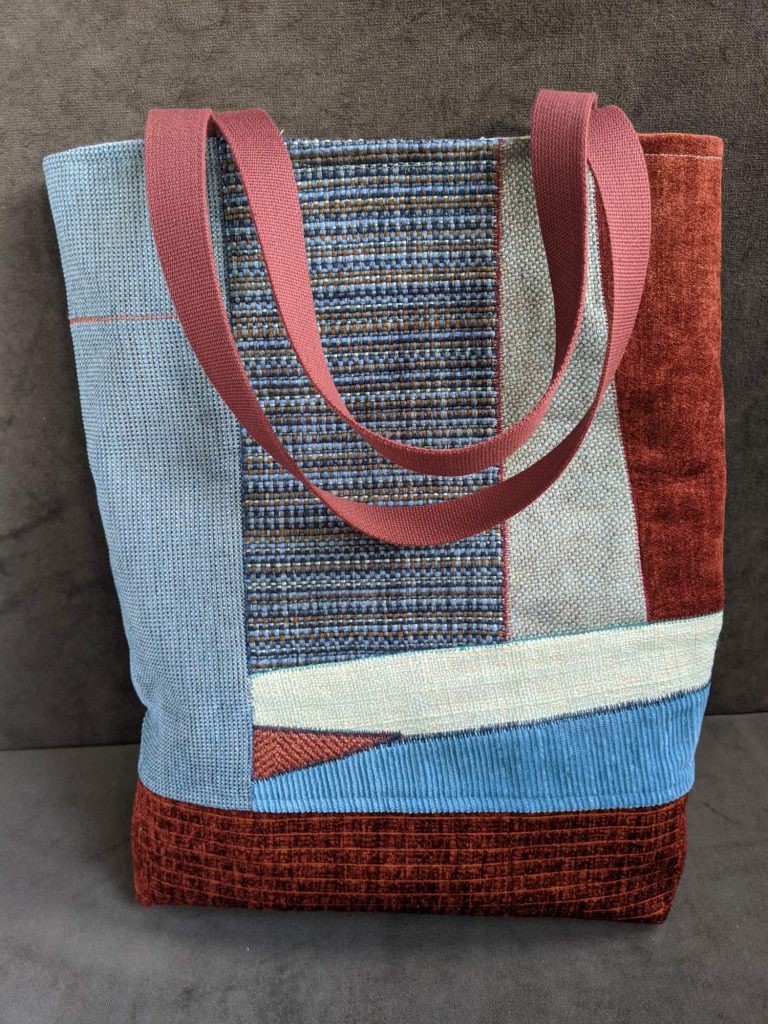 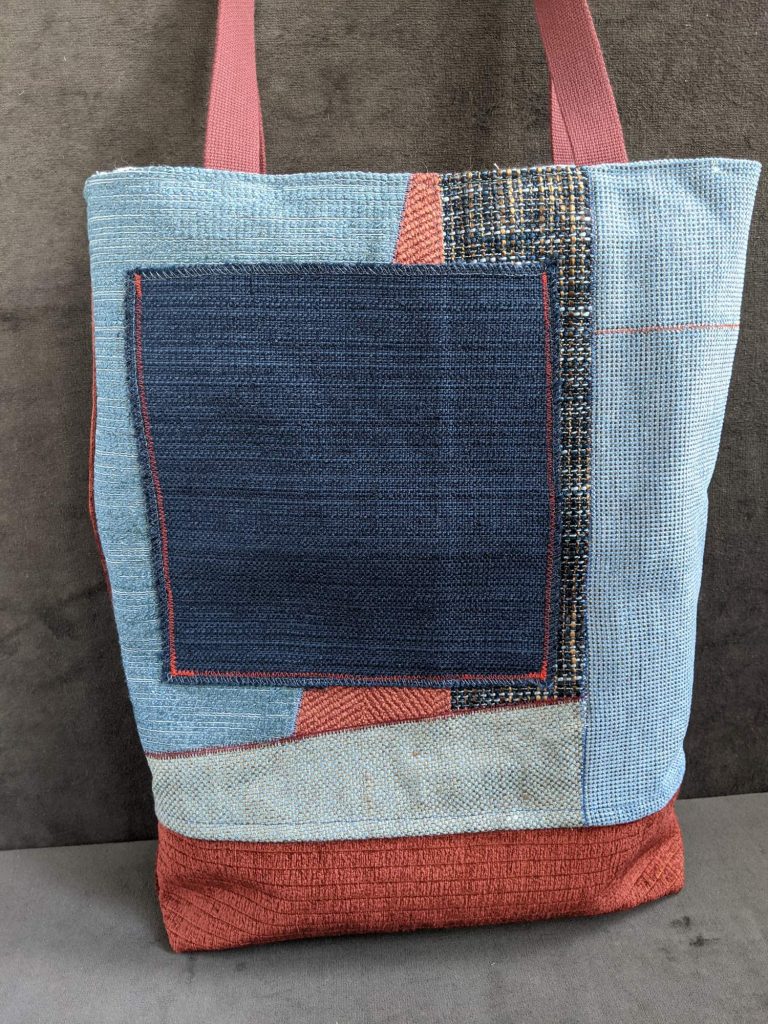 I’m pretty happy with how it turned out. My friend was right 🙂

Second Patchwork Tote: From Busy Work to a Memory Piece

In January 2019 I visited my parents. I really enjoyed spending time with them, but I was used to working with my hands, and really needed some fabric to stitch and keep my hands busy. My dad had a pile of torn jeans he no longer wore, so he gave me one, along with some rags. I started stitching Sashiko-style patches, just for fun. When I returned home, I added a few pieces from my scrap piles, with the intention of eventually making a tote.
Two months later my father passed away unexpectedly. I couldn’t touch these patchwork panels after that, and into the UFO pile they went.
I’ve now finished that tote, which became so much more than just a way to keep my hands busy. I gave it to my daughter, as a memory piece for my dad. She’s already using it, carrying a bit of her grandfather with her every time she does.
Here it is from the front: 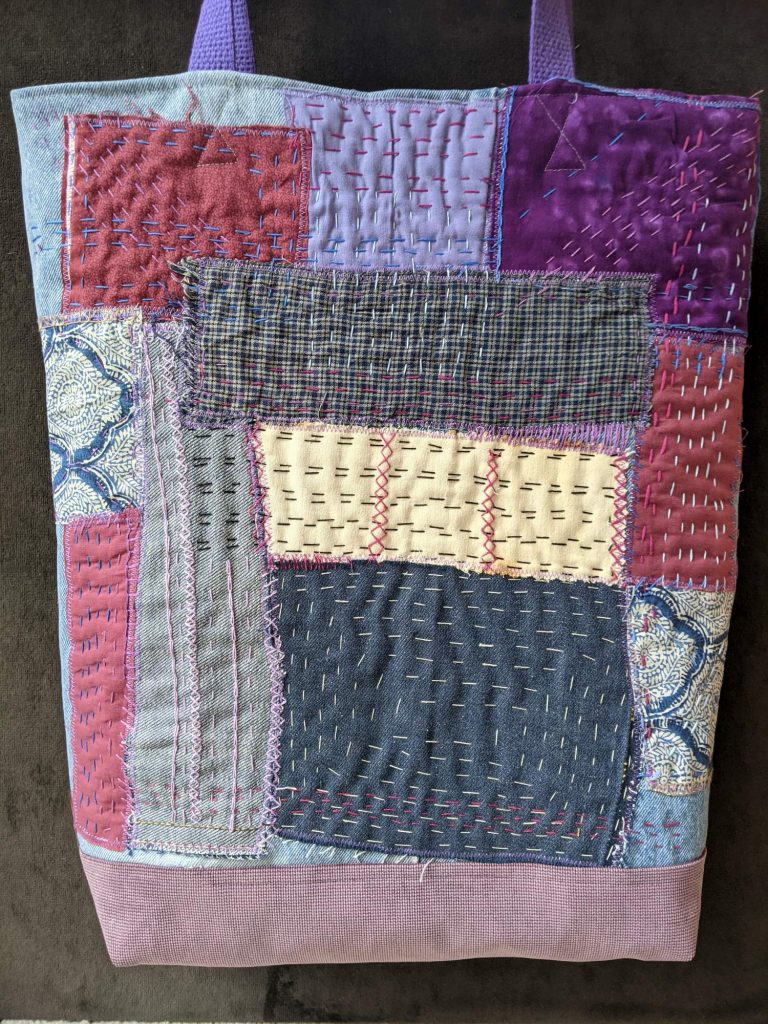 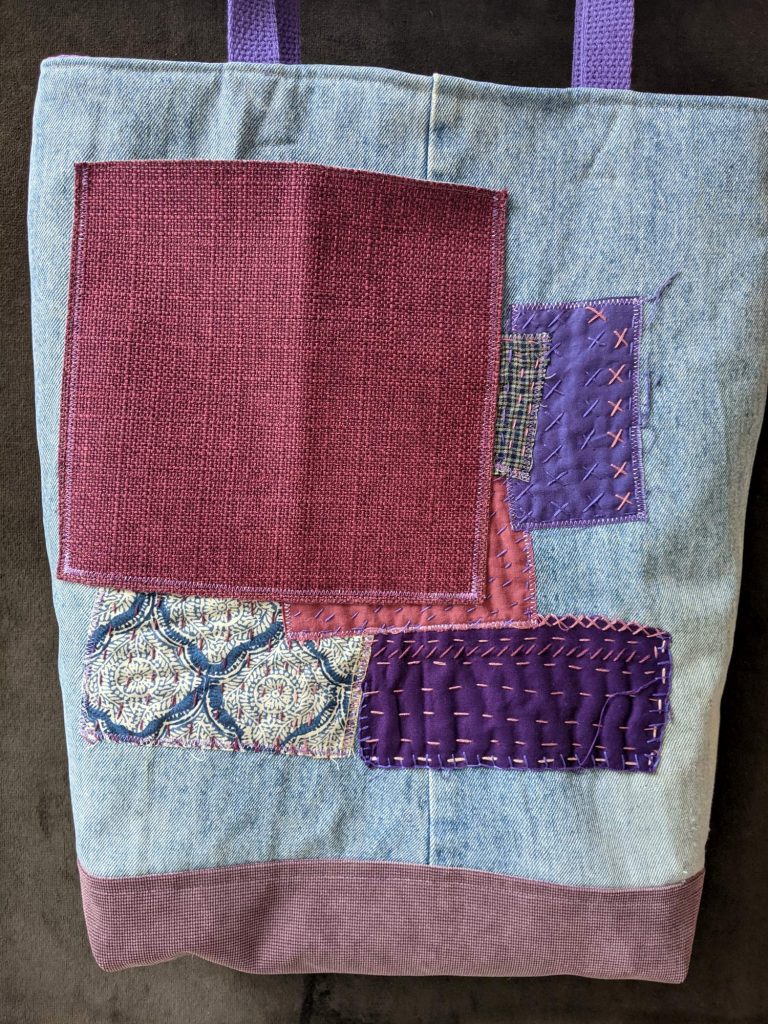 The third patchwork tote bag took a LONG time to make. It started way back in summer 2018, in a narrow alley in Nara, Japan. My daughters and I browsed interesting little shops and boutiques (in the good old days when this was still possible!), when we went into an artisan shop and saw these gorgeous, hand-carved wooden handles. Of course I had to buy them! Right there and then the image of a Japanese-inspired tote popped into my mind. 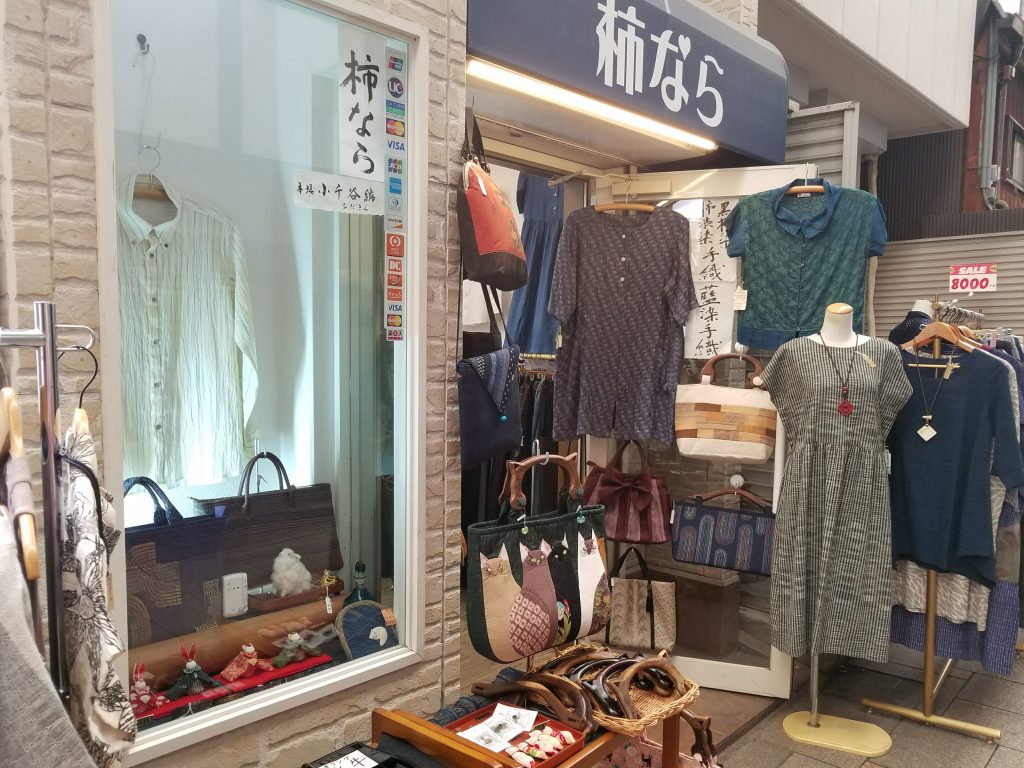 We kept walking and browsing, and came into a store selling antique Japanese fabrics. I bought a bundle of mostly indigos, but also some bright red. I knew exactly what i was going to make with them! 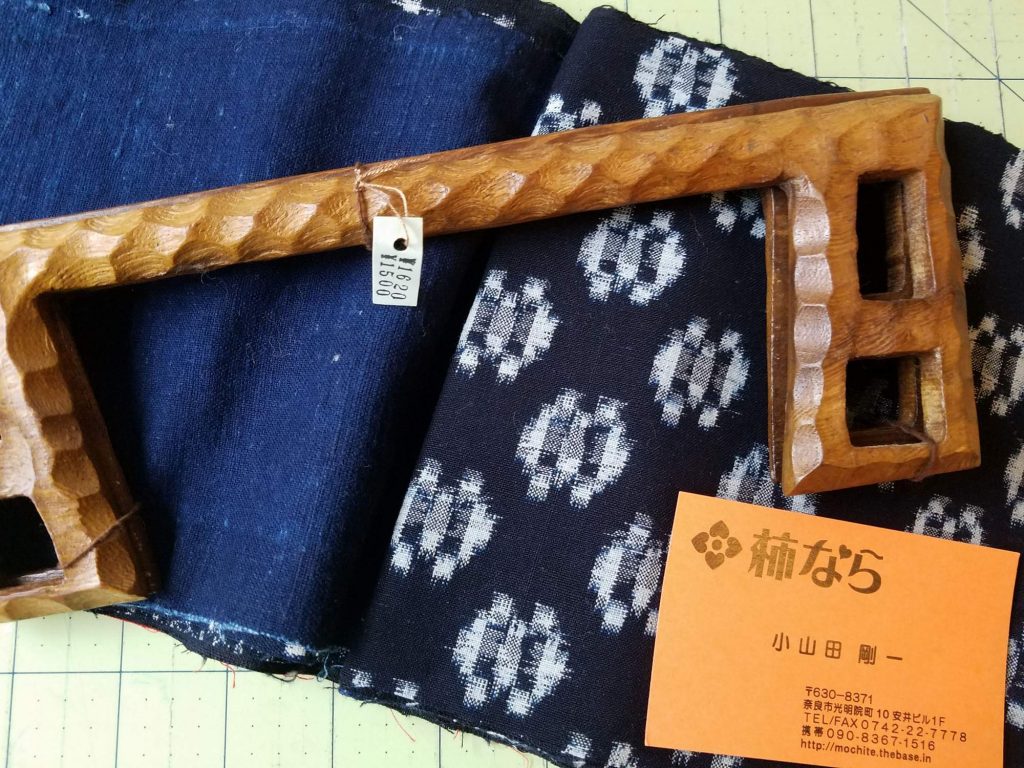 Back home, I used some of the vintage Japanese fabric to make a Boro-style patchwork panel (I later used the remaining fabric in my jacket). I also added some fabric from my stash. I spent days (weeks?) Sashiko stitching it all over. I finished the outer layer, and then got distracted. The stitched panel ended up–you guessed it!–with my other UFOs.
Well, I finally completed the tote. I even added a wooden hand-made button that I bought years ago (and haven’t found use for until now!).
It turned out just the way I imagined it, in that narrow alley in Nara. This is the front: 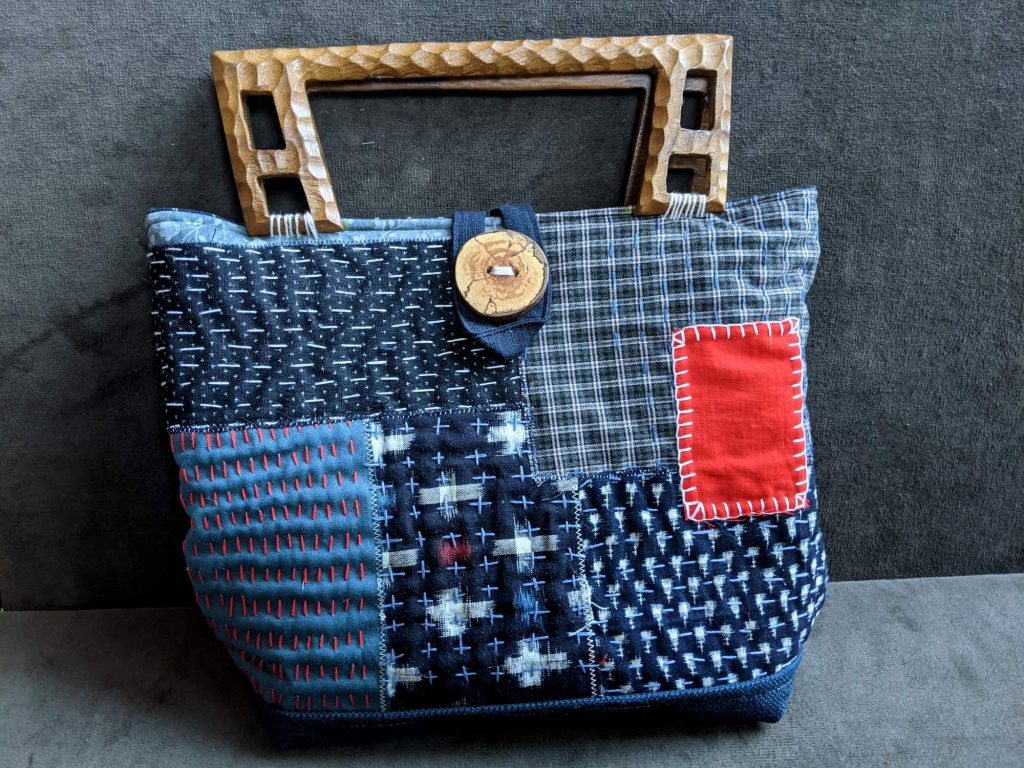 And this is the back: 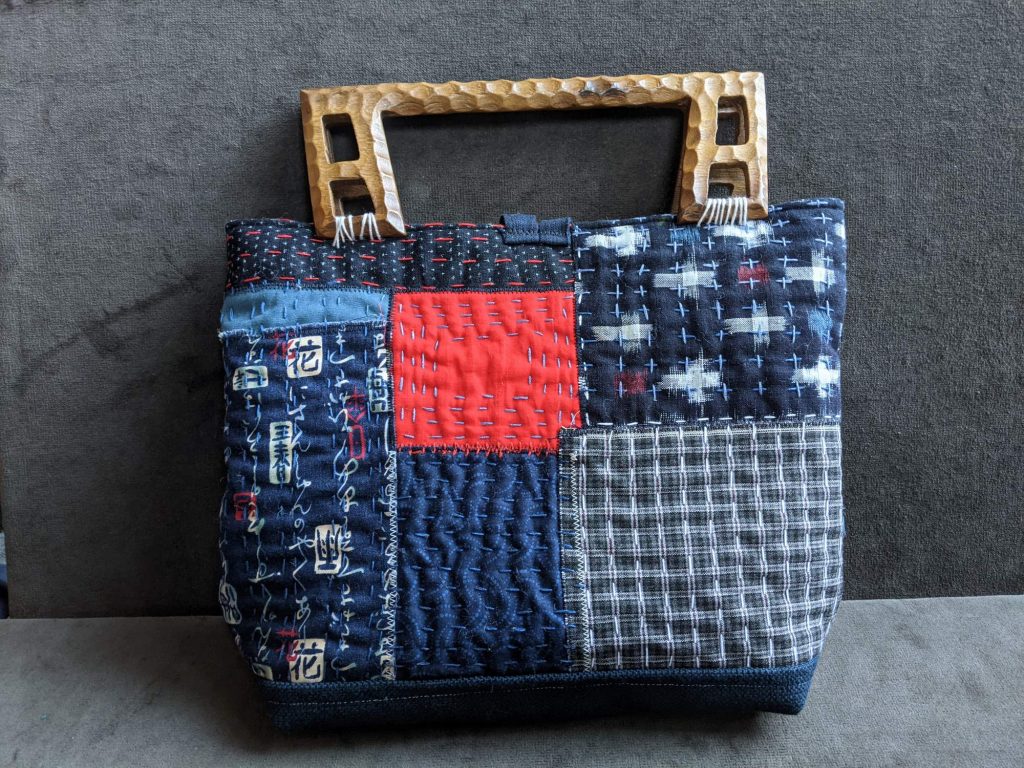 I’ll be giving this tote as a gift to my sister, once I can finally see her again. Something to look forward to…

Over the years, I have accumulated an ever-growing pile of UFOs (Unfinished Objects). This wasn’t intentional, it just kind of happened. Sometimes I was working on things right before vacations or trips, and never got to them once back. At other times I started something new before finishing an existing project, and then moved on. And right before my father passed away, I worked on a big batch of totes, and then couldn’t bare to touch them afterwards.

I kept my UFO pile on a glider chair that was a part of our guest room before I conquered it and turned it into a sewing room. It didn’t bother anyone, and was just sitting there, getting taller and taller each year, out of mind although in plain sight (I have to admit that sometimes I did feel a little guilty because of it…). Over the years, whenever I did a major tidying up of the sewing room, I reluctantly went over that pile, and sometimes took things out that I no longer liked. But major tidying up was rare, and for the most part I didn’t even remember what was in the pile. Until, in the fall, my kids decided they needed the glider chair, that is. They moved it into our family room, leaving my UFO pile homeless on the floor…

You need to understand that my sewing room is rather small, and that a queen-sized guest bed takes most of its floor space. That leaves very little space for me to work in. Having the UFO pile take some of that space was bothersome. And so, in December, I decided to go over it and take inventory.

During my excavations of the pile, I found 58 projects (!!) as follows:

I am usually not one to make New Year’s resolutions, but this was too much. Besides, I needed the floor space for my scrap boxes. AND I thought I should teach my kids by example, and I DO want them to finish things they start… So, I decided to dedicate January to finishing up as many of these projects as I could. I forbade myself from starting anything new for an entire month.

I decided right away that I don’t have to finishing everything. Only the projects that I still liked, and only those that were in fairly advanced sewing stages. I decided to absorb the fabrics of early-stage projects back into my stash. That meant dismantling the veggie bag, moth, one journal cover, one crossbody bag, five clutches and a zippered pouch. All of these went back into my stash, as I barely started them.

I resolved to leaving the jacket for the spring, and work on the quilts later.

Of what was left, I decided to start with the smaller projects, the ones I could complete relatively quickly. I knew that seeing them finished will encourage me to keep going.

I began by completing the zipper pouches. The first three I probably started in preparation for some craft fair or other, although I don’t remember exactly when. I worked on scrappy pouches (in the bottom pf the picture) in fall 2019, when I made them as gifts to family and friends. I didn’t have time to finished those three then. If you’d like to try making your own, you can find a tutorial here. 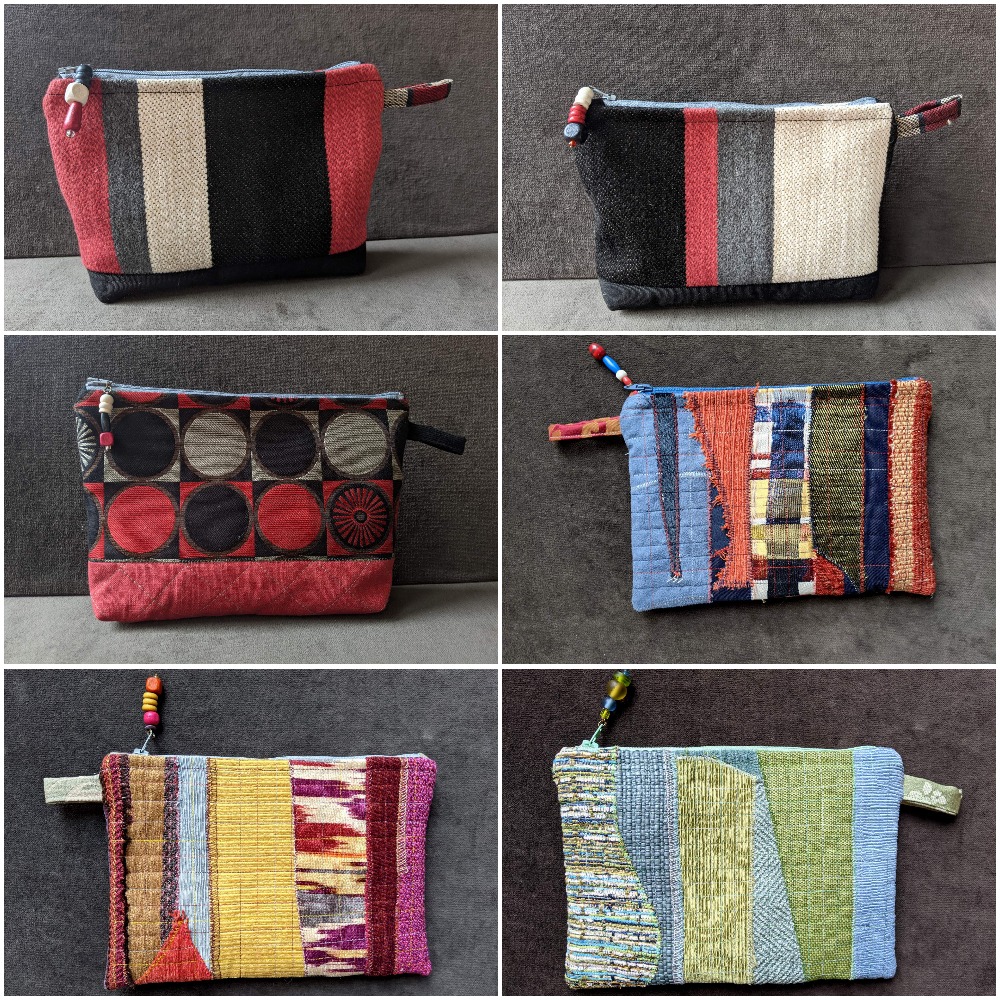 Once the pouches were all finished, I went on to complete the one remaining clutch. I started it in spring 2018, in preparation for a May craft fair. At the time, I made two clutches out of the same beautiful embroidered fabric. I never got to finish this one, so it ended up in my UFO pile. Its sibling, on the other hand, sold right away.
Like all my clutches, I lined this one with silk and decorated it with an enameled coconut-shell button. 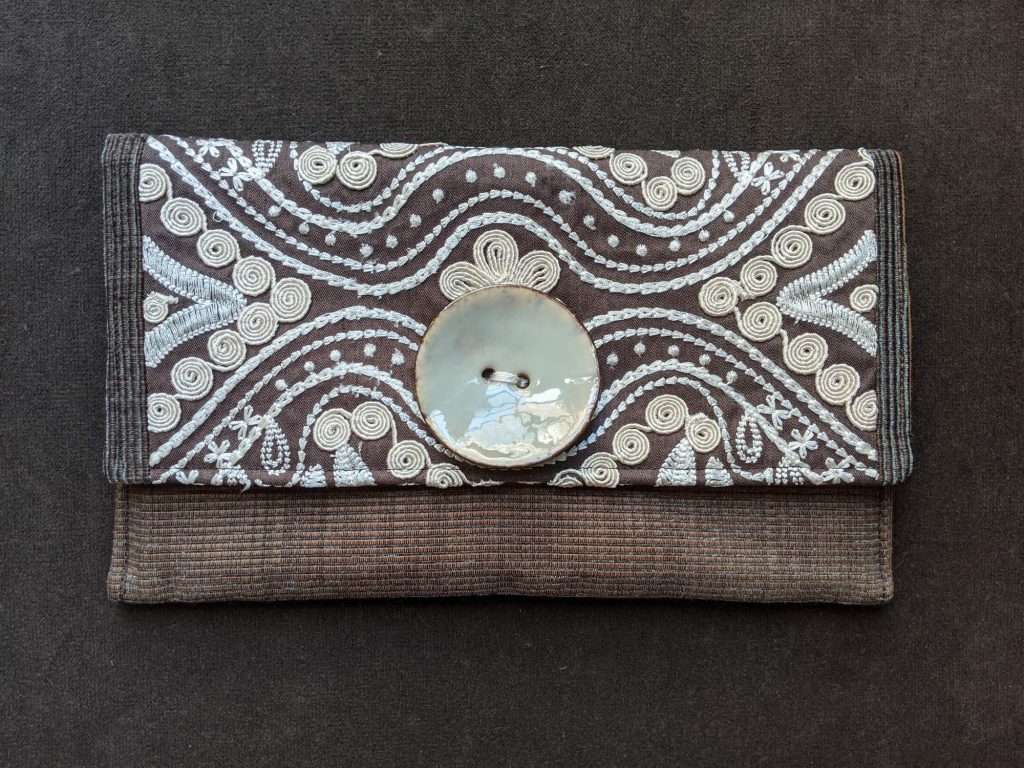 When I finished with the small items, I moved on to the mini crossbody bags. I don’t remember when I started those. More than a year had passed since I last sewed a bag, and when I resumed working on these I was surprised to realize just how much work they were. There are so many required steps, thread changes, ironing… 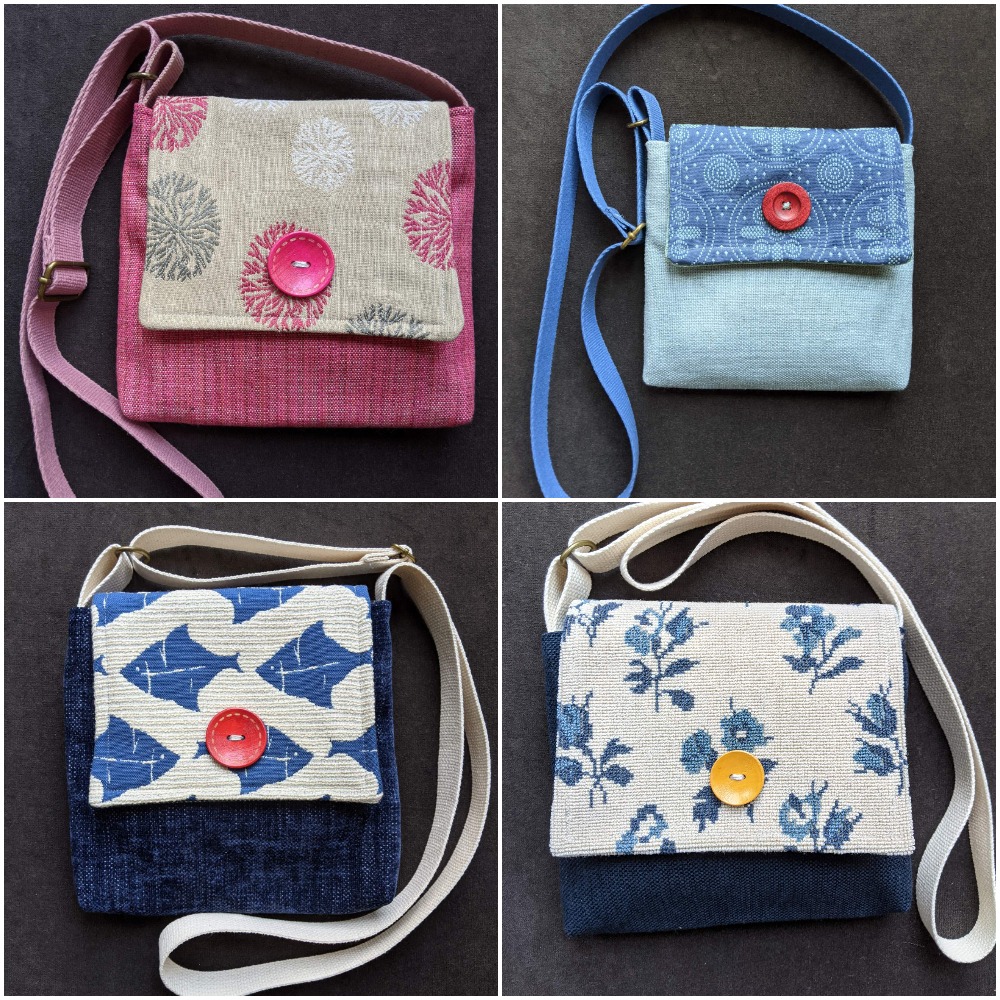 Back in December, when I decided to dedicate January to UFOs, I imagined myself sitting in my warm sewing room, hot beverage at hand, looking out at the rain. But January 2021 in California turned out to be one of the warmest I remember. It was dry, sunny and for one week–summer hot, with temperatures close to 80 degrees. Naturally, I couldn’t just sit and sew. I ended up spending a few days gardening, something I’ve never done in January before…

There were three messenger bags in my pile. Two required just a few extra rivets. The third, in the below picture, waited almost-finished for a LONG time. It was one of the very first bags I ever designed. At the beginning, I experimented with shaping bag flaps to match the fabric designs. I probably made 3-4 bags in this way. For this one, I sewed the flap and lining years ago, but still needed to finish the outer layer. In recent years I’ve always been making the lining last, so it was surprising to realize that I made them first once. It might be five years later, but I finally finished it! 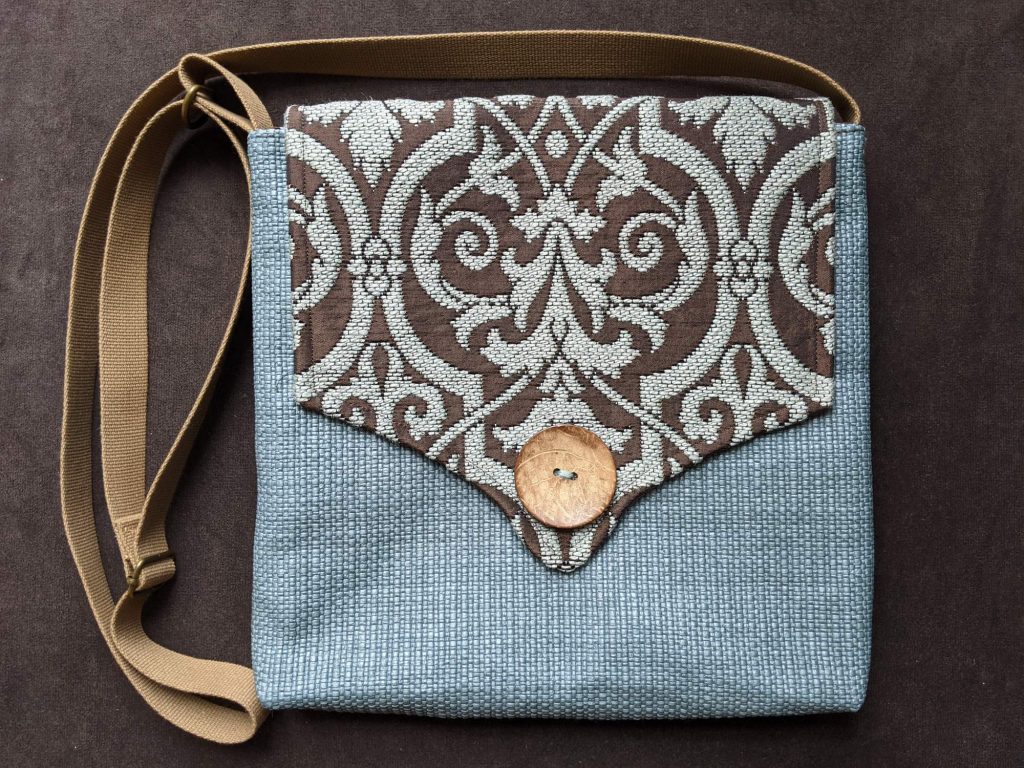 Most of these finished items are now listed in my Etsy shop.