If you’ve been following my blog for a while, you probably know that I love finding street art wherever I go. I’ve discovered some pretty cool art in London, Quito, Bern, and Tel Aviv, to name some. So it was only natural that I kept an eye out for street art on our latest trip to Japan earlier this summer, too.

When we got to Japan, however, I quickly realized that we have arrived at the cleanest place I’ve ever seen. Yep. It was cleaner than Peru. And even cleaner than Switzerland, which is very hard to beat. Graffiti? Not in Japan! I can only imagine what would happen to anyone who dared try: the poor artistic soul would be attacked by civilized citizens and then fined or arrested by the police. A fleet of elderly ladies would immediately appear on the scene of the crime, armed with sponges and soap, to wipe the abomination right off the face of the earth…  Nope. No graffiti in Japan. Anywhere. Period. And we’ve been to many places…

But on our second day in the Land of the Rising Sun, while visiting the city of Matsumoto, I happened to look down, of all places, and realized that Japan had another kind of street art, one that I haven’t noticed anywhere else before.

It actually had art built right into the street!

Do you recall walking down a street and stepping over manholes? Did you ever even look at manholes covers, or notice them? No? Neither did I. Ever. Until I went to Japan.

Because, as I was walking down one of Matsumoto’s streets, I happened to step over the most beautiful manhole cover I have ever seen. It was elaborate and beautifully painted in many different color. This manhole cover had local symbols all over it. It certainly got my attention!

After that, I started looking. I noticed there were different kinds of manhole covers, for different utilities (water, electricity, sewer and so on), each with its own pattern. When we traveled from one place to the next, I noticed that manhole covers were different in each district or municipality. Someone, somewhere, has been paying a lot of attention to designing these manhole covers. Even the simplest among them were beautiful, symmetrical works of art. Manhole covers in Japan are aesthetic. They are meant to be noticed. They beautify the streets, and they are bursting with local pride.

I started taking pictures of manhole covers and collecting them wherever I went. The kids enjoyed helping me, and pointed them out whenever I missed one. It became a fun game for us all!

Here are some of the simpler ones, collected from all over the kingdom (and yes, some are upside down): 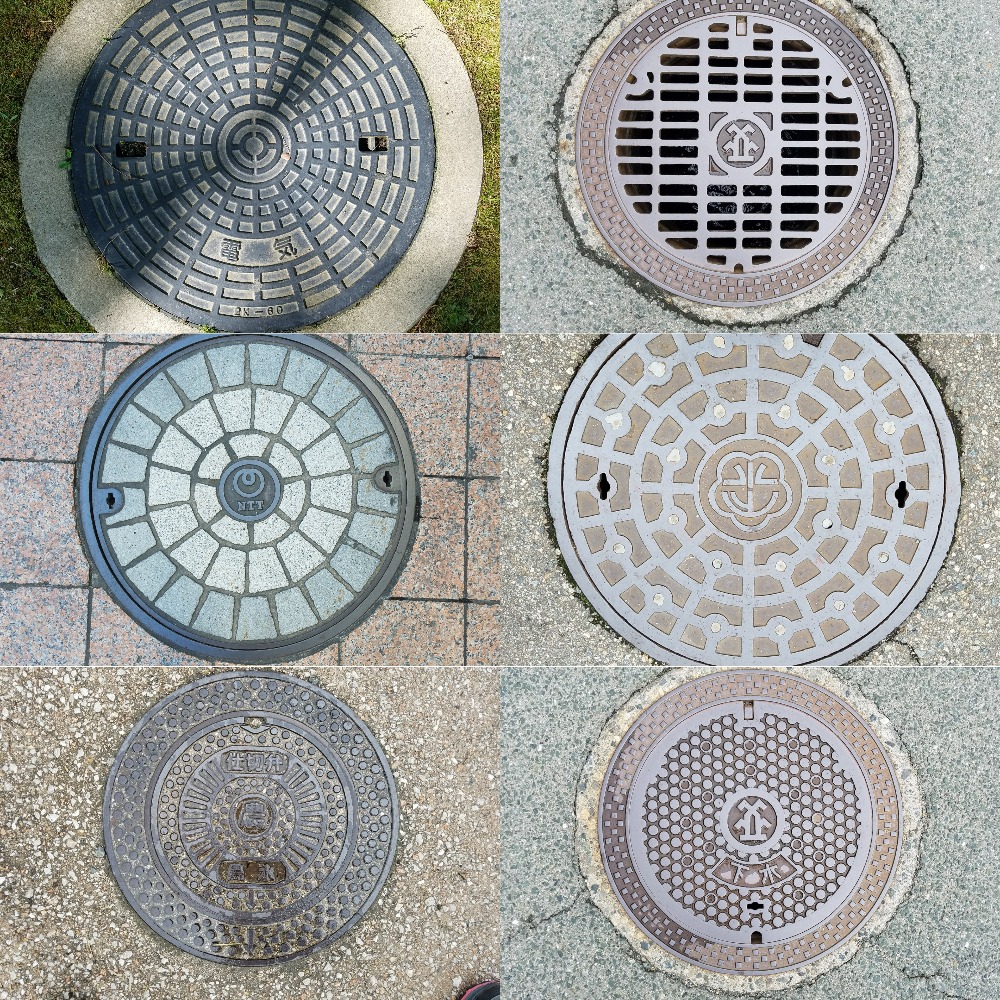 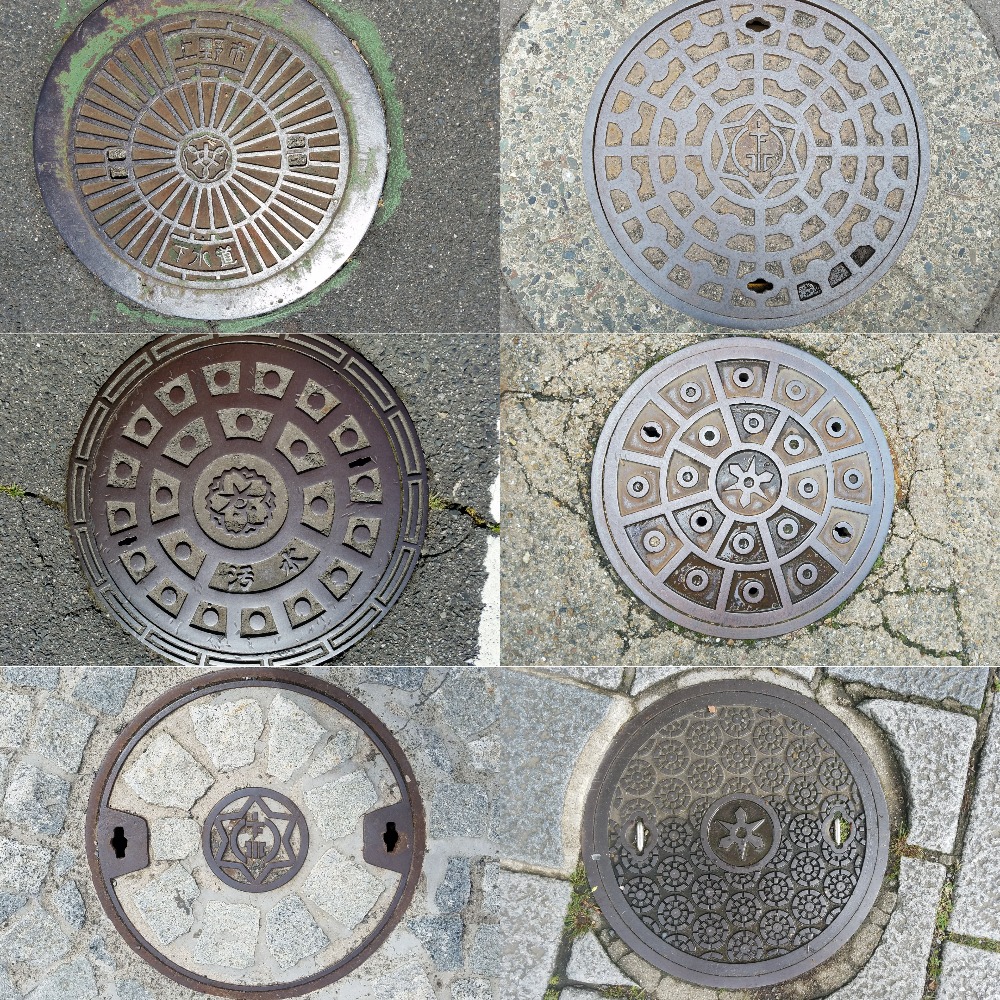 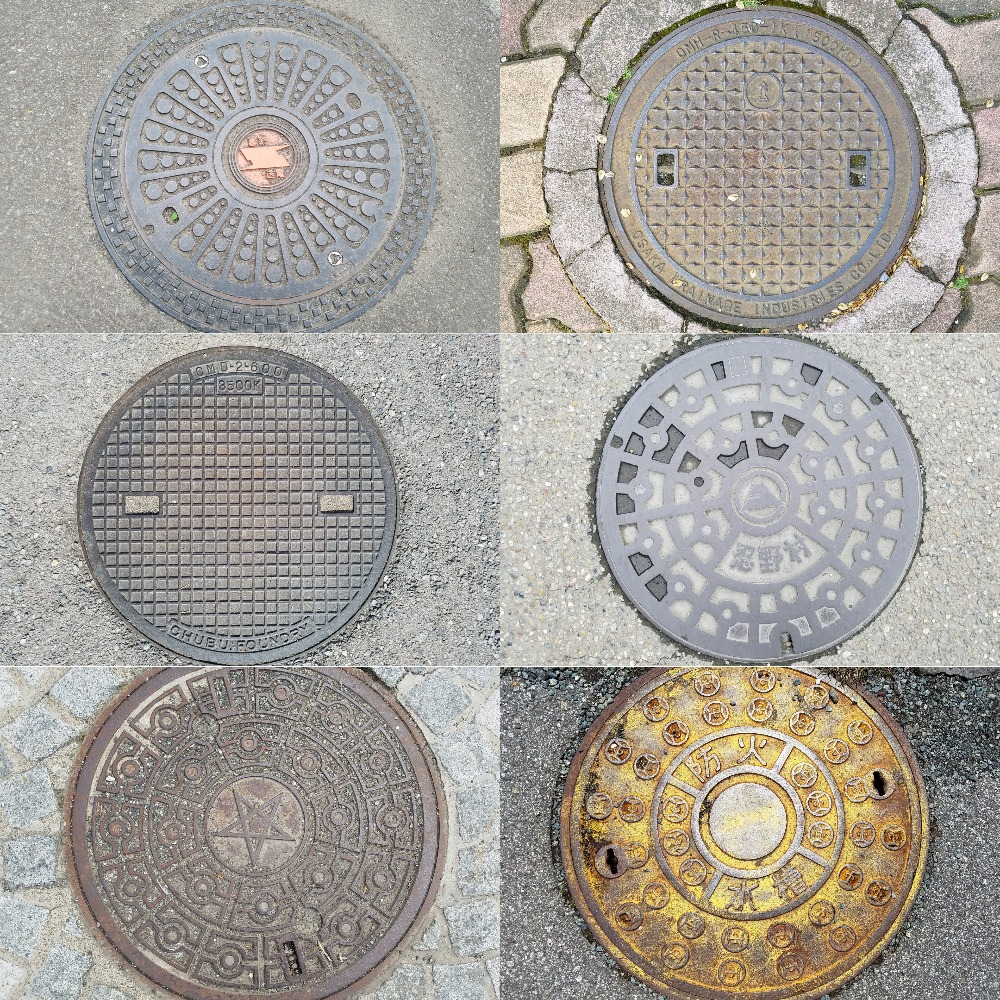 There were a few rectangular ones every now and then, too. Like this one. And they were no less beautiful: 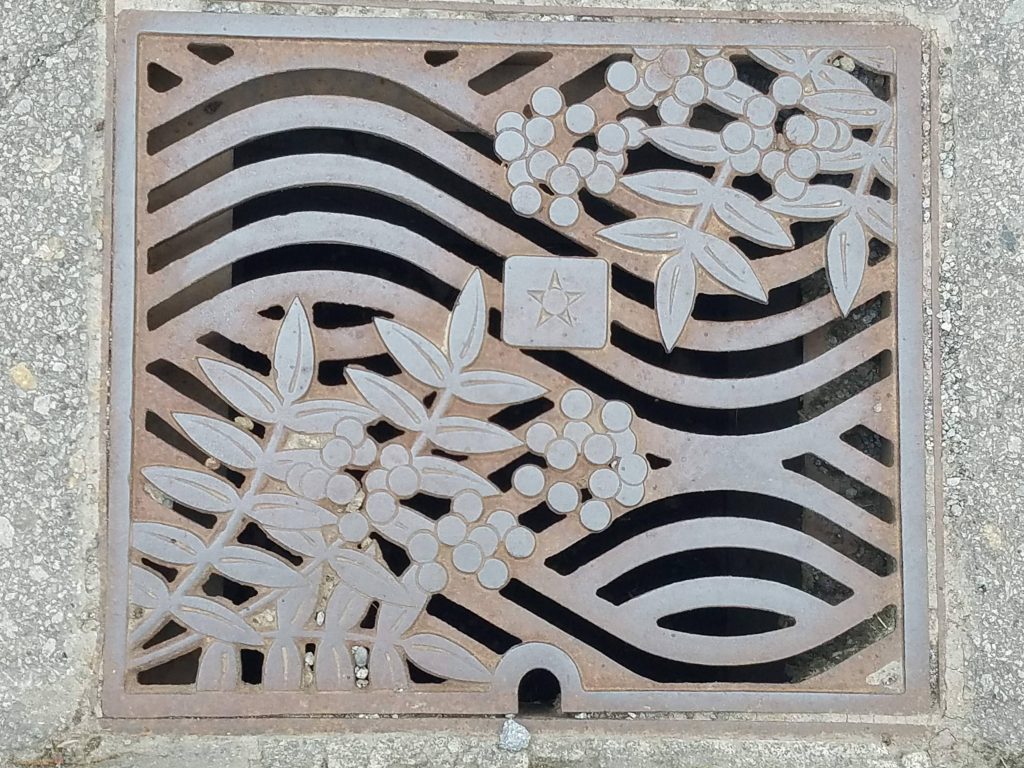 Some were a little more elaborate, with a bit of color added: 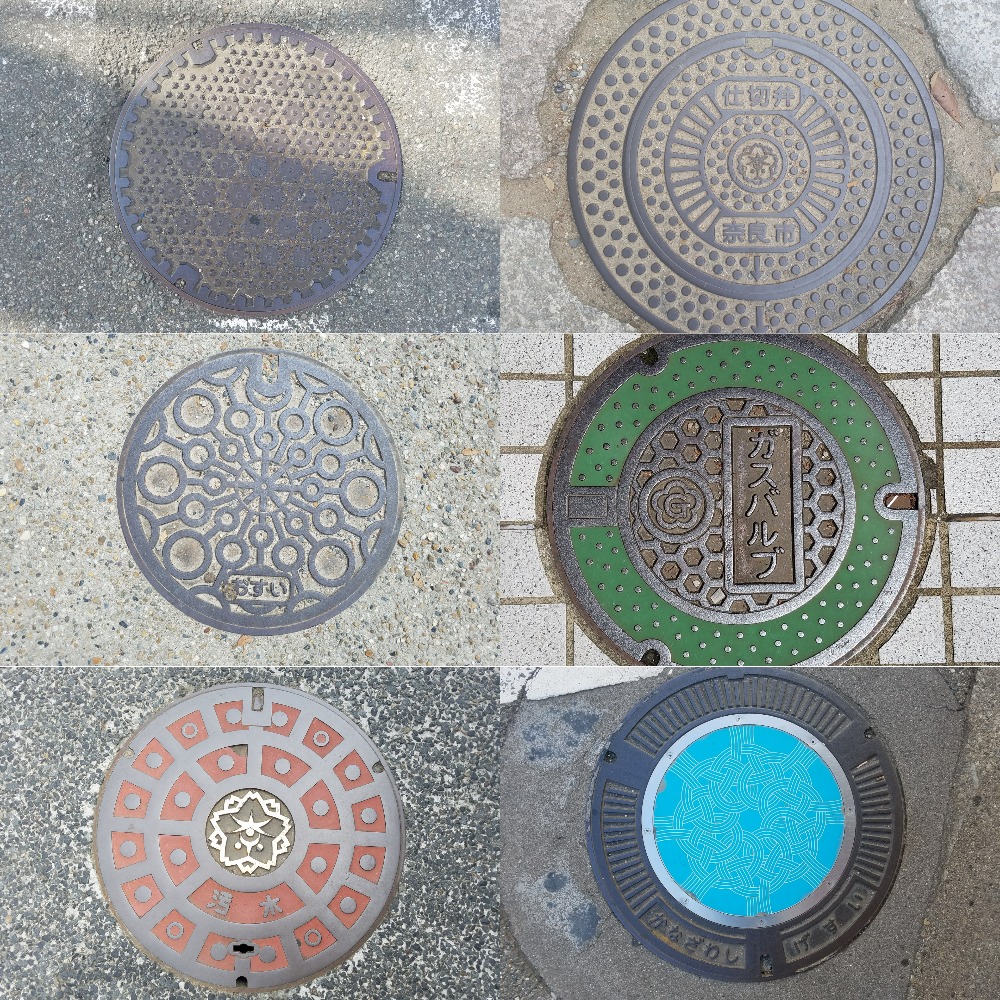 Then there were the local declarations of pride, beautifully designed with local symbols, often local flora and fauna, and historic sites: 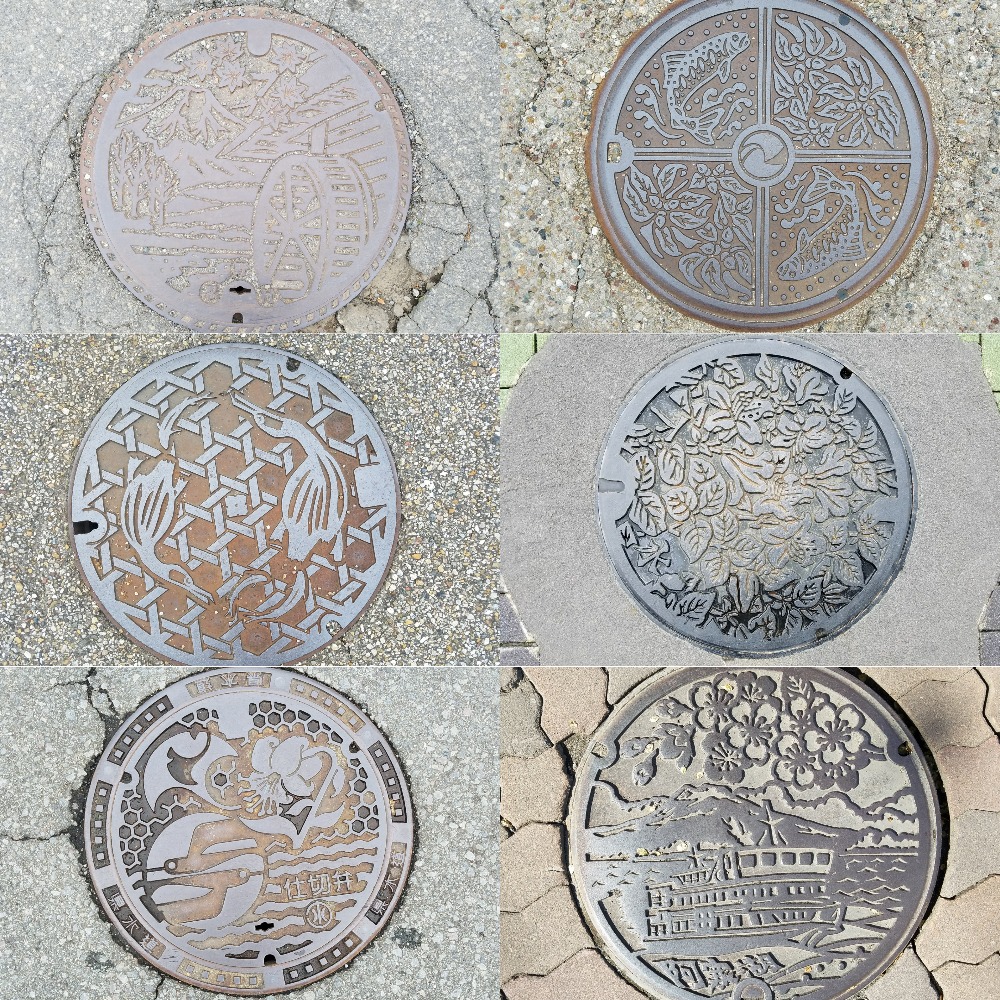 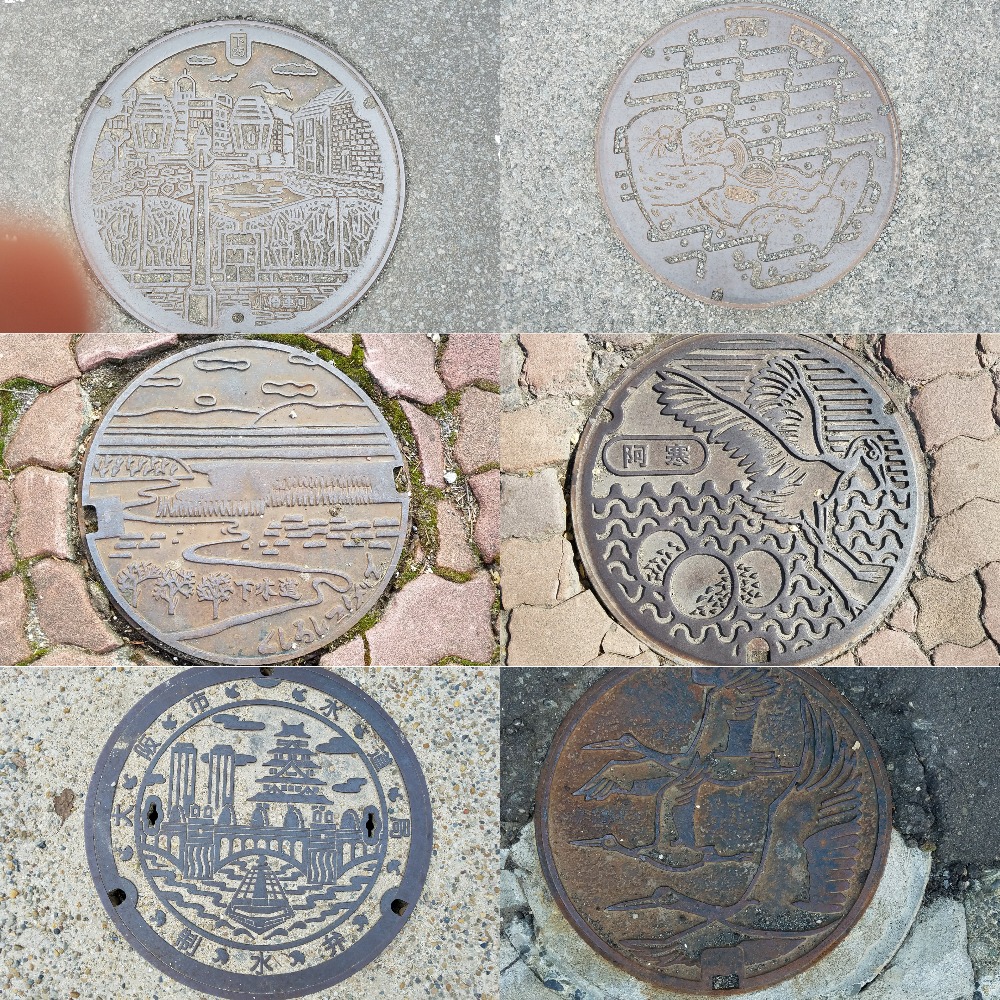 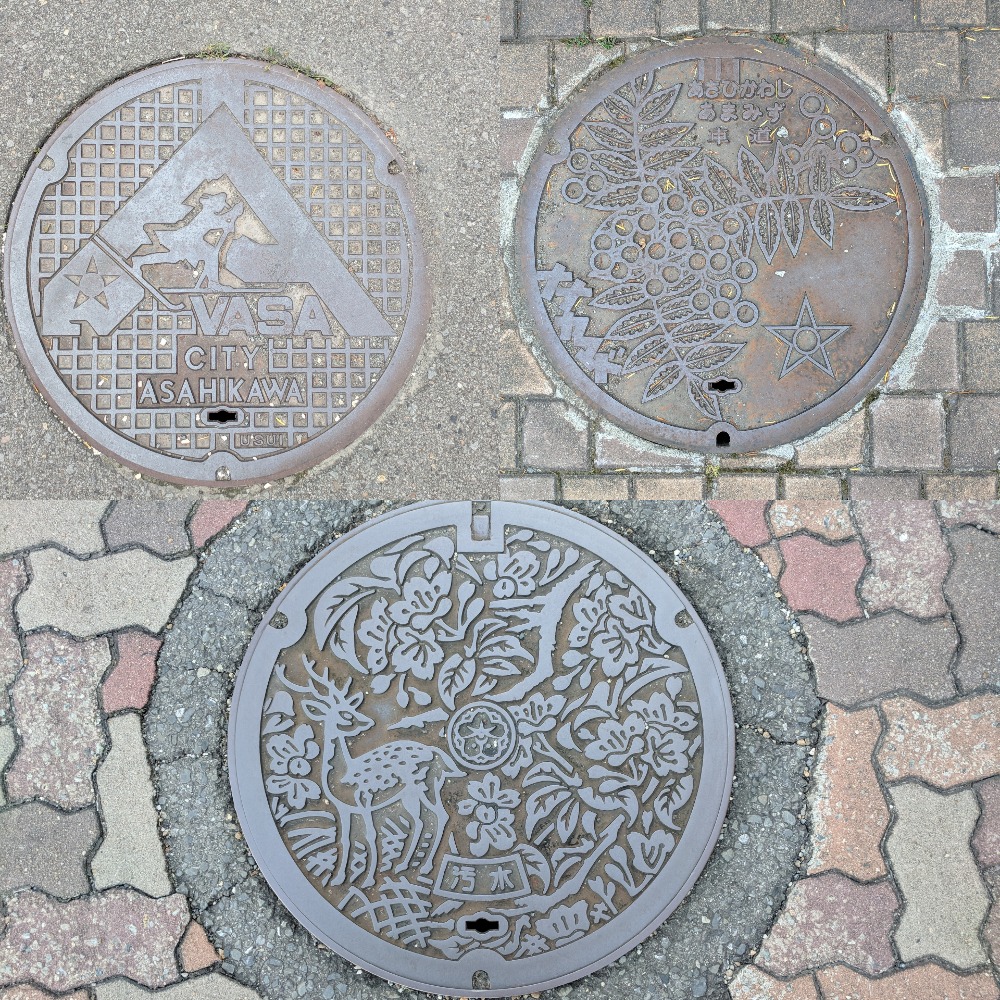 The most beautiful of all were the colored ones. Those must have had tourists in mind, because many of them included place names in English: 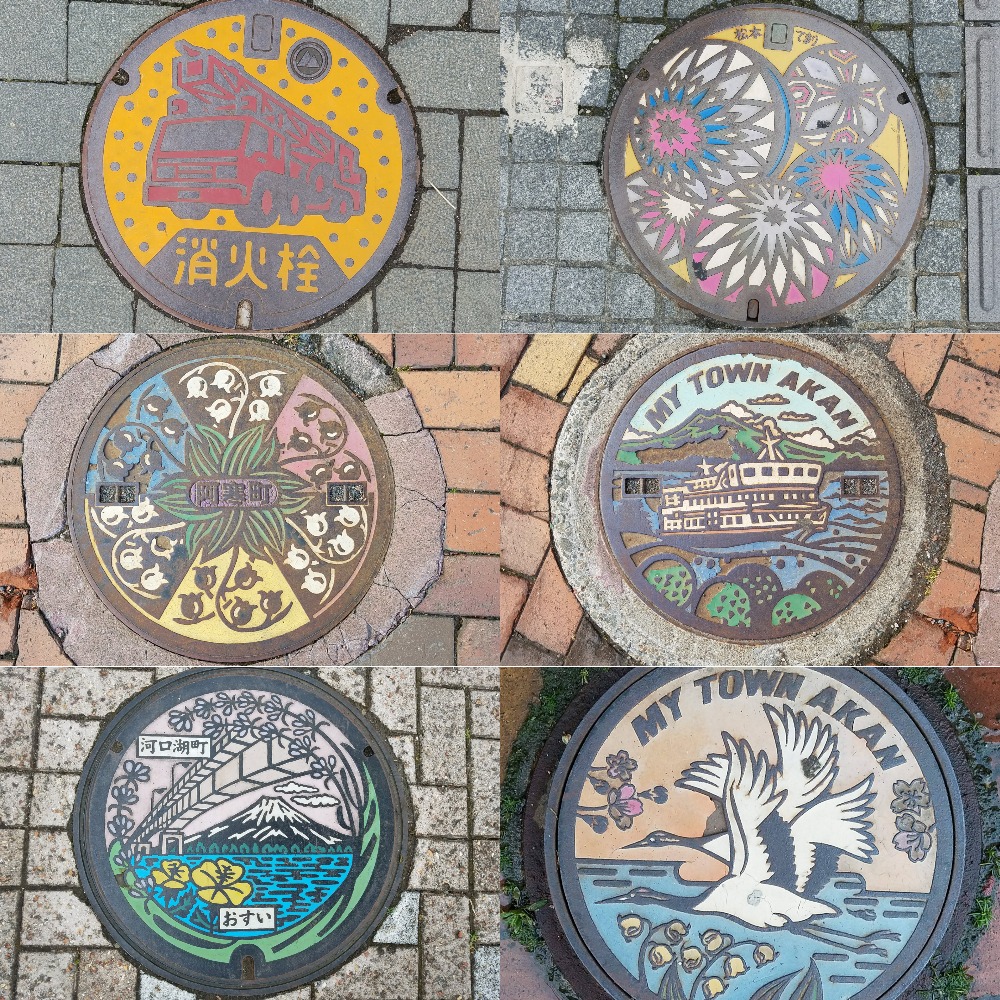 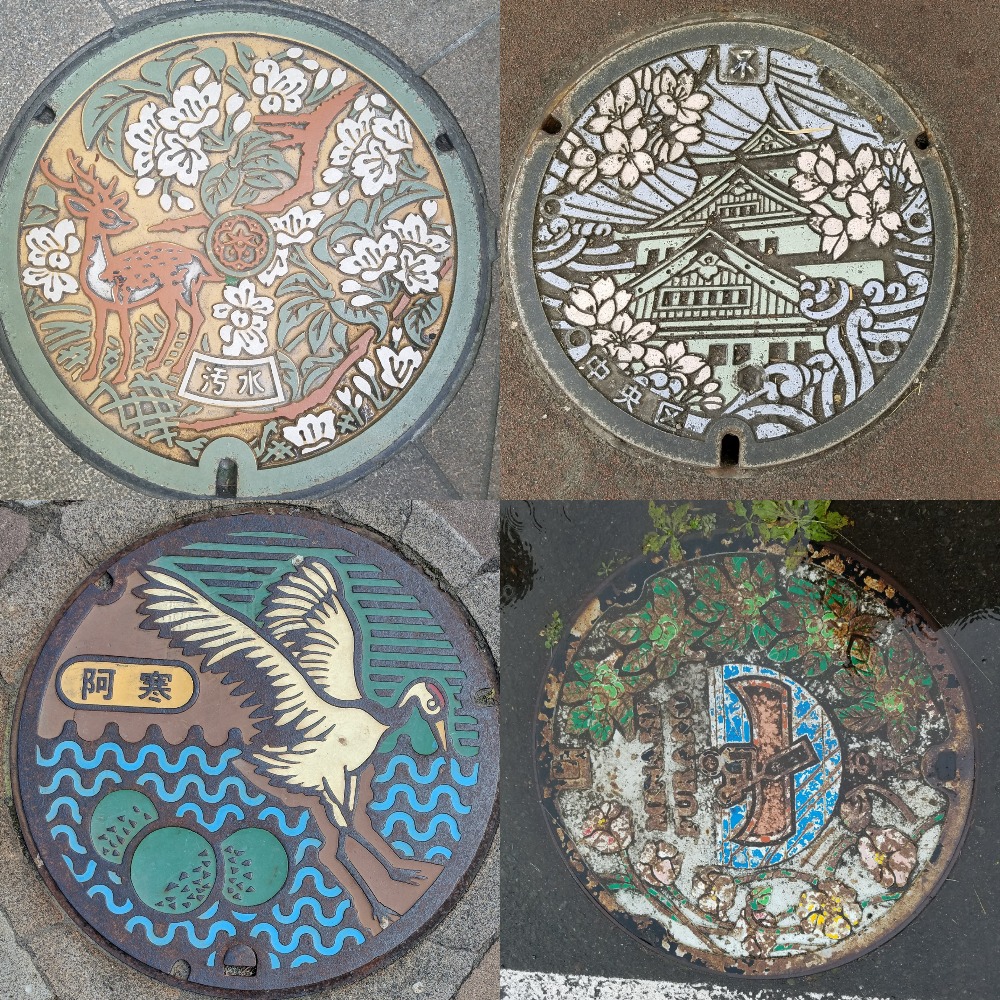 (You’d notice the bottom picture on the right is twisted. I couldn’t for the life of me get the computer to turn it, so just turn your head. It depicts a man rowing a boat).

So, start opening your eyes when you walk down a street! you never know what you’ll find. And if you happen to visit Japan, definitely look down at your feet. You’ll discover that Japanese civil engineers and city planner are actually artists, too!

I love seeing art when I travel. Fine art exhibited in museums, of course, but also grass-roots arts, such as the arts seen at craft markets or on city walls. Yep. Graffiti can be viewed by some as vulgar vandalism, but it is also the artistic expression of certain segments of society.

In Tel Aviv, Israel, there is an entire neighborhood that celebrates graffiti: Florentin, in the southern part of the city. There, colorful murals completely cover  several city blocks. On my latest visit to the Holy Land several months ago, I went to check it out. I enjoyed looking at all the different works created by different people. The paintings were a collection of many styles, ideas, and political orientations.

Here is a little taste of what this neighborhood has to offer: 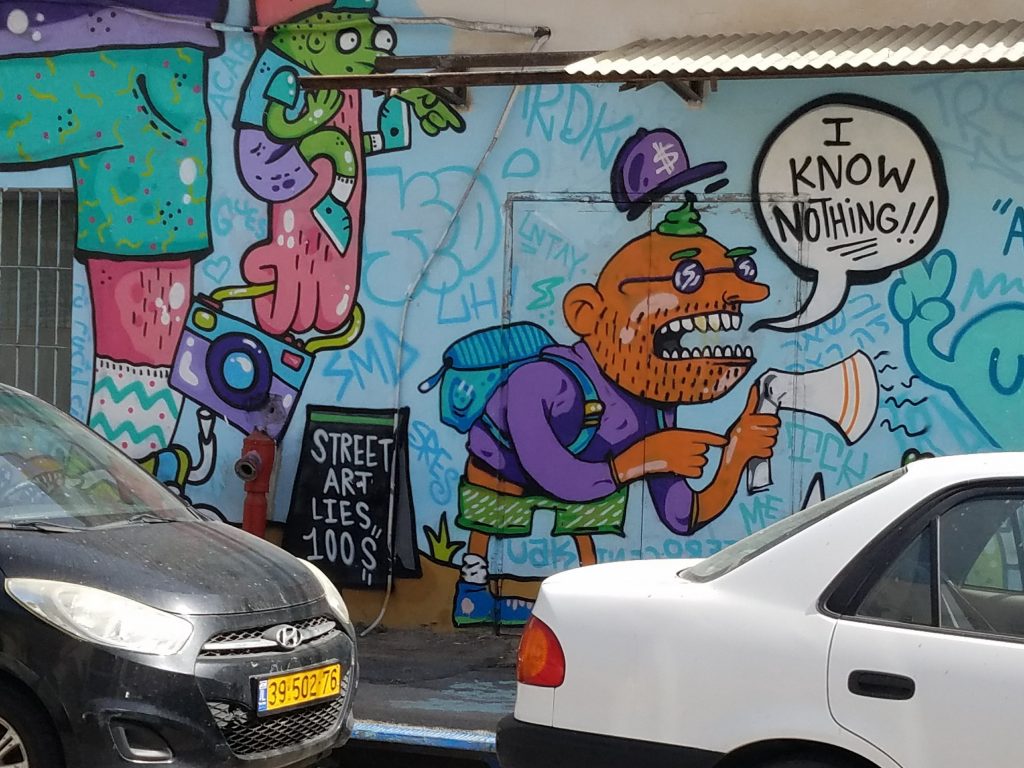 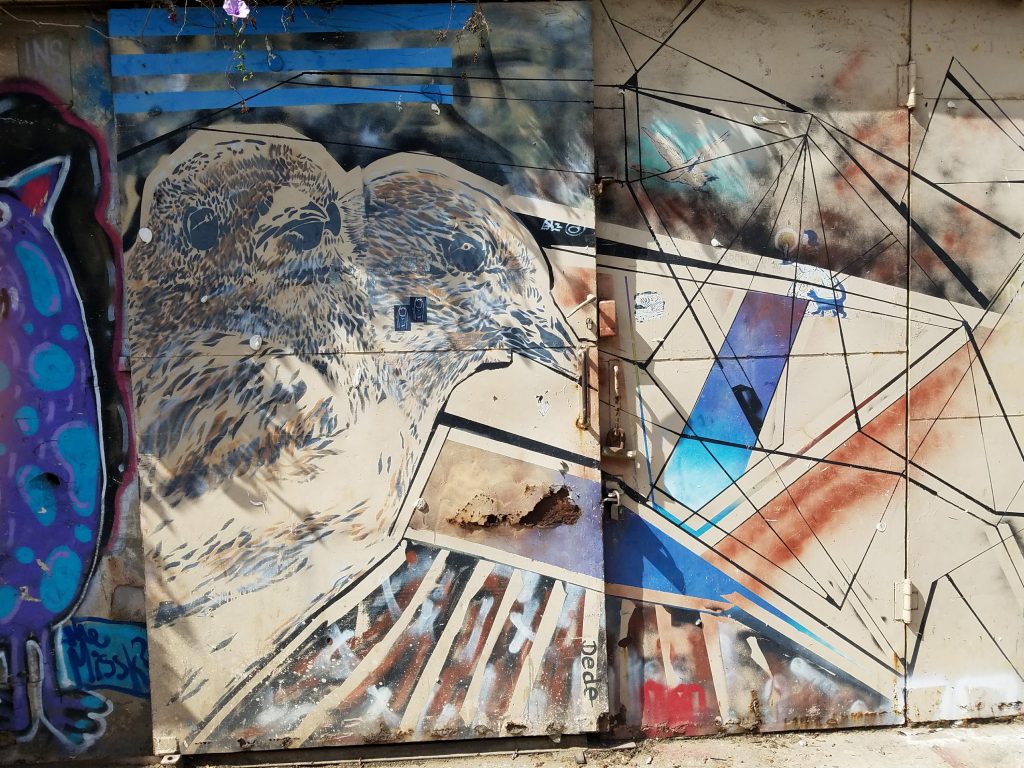 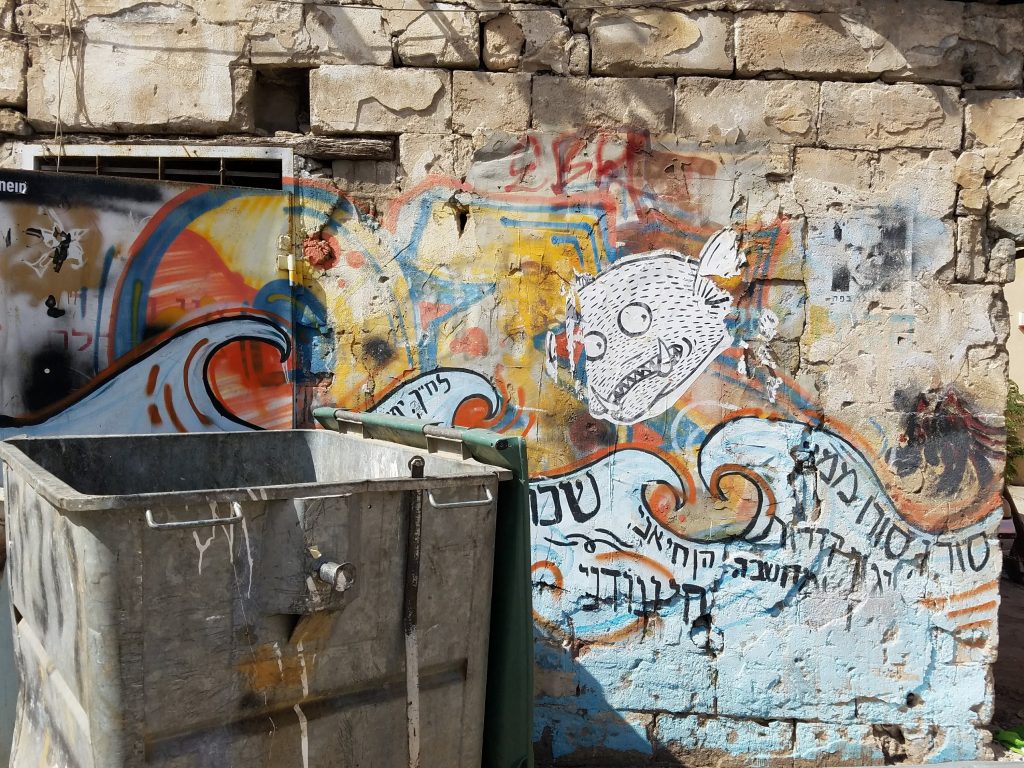 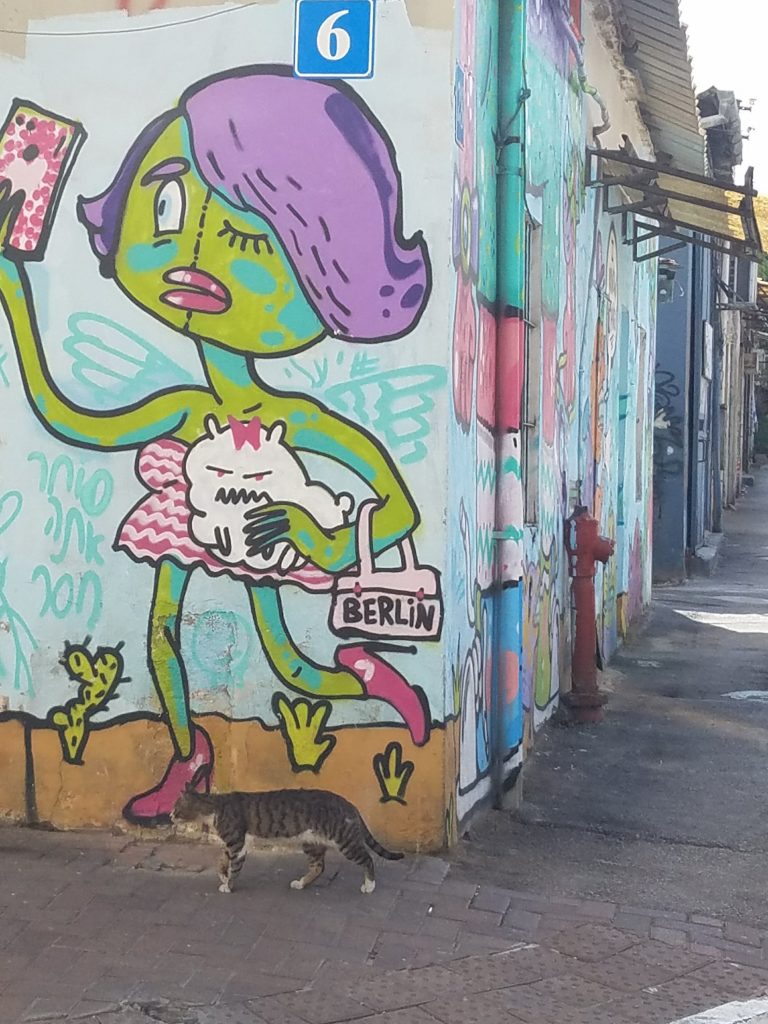 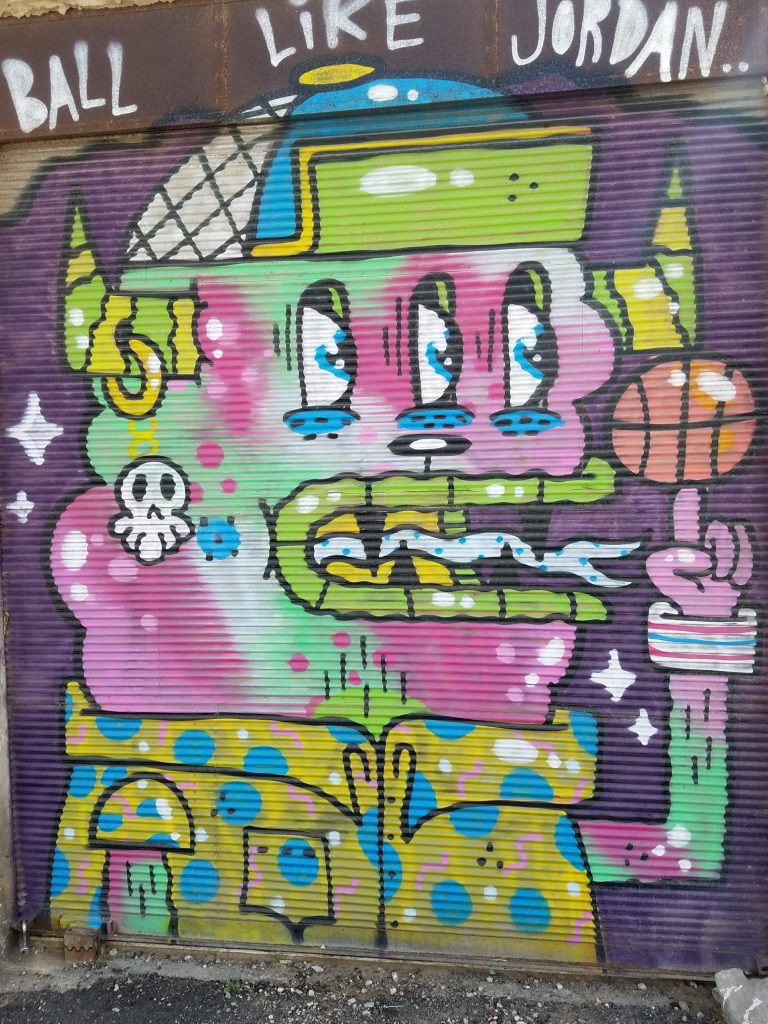 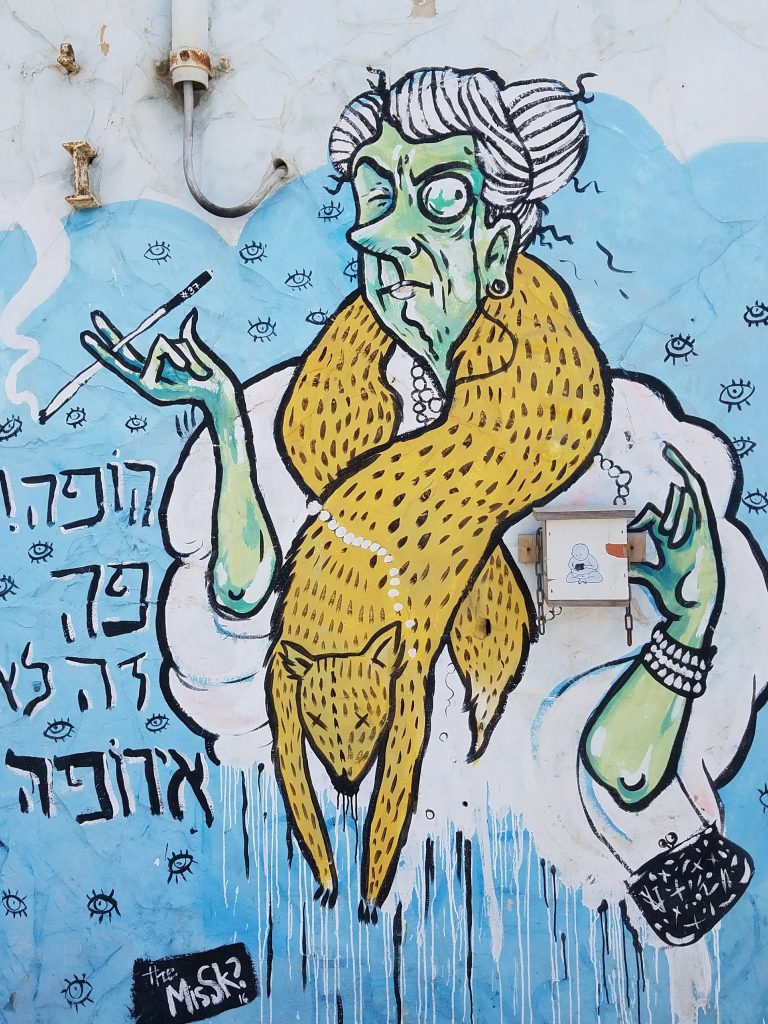 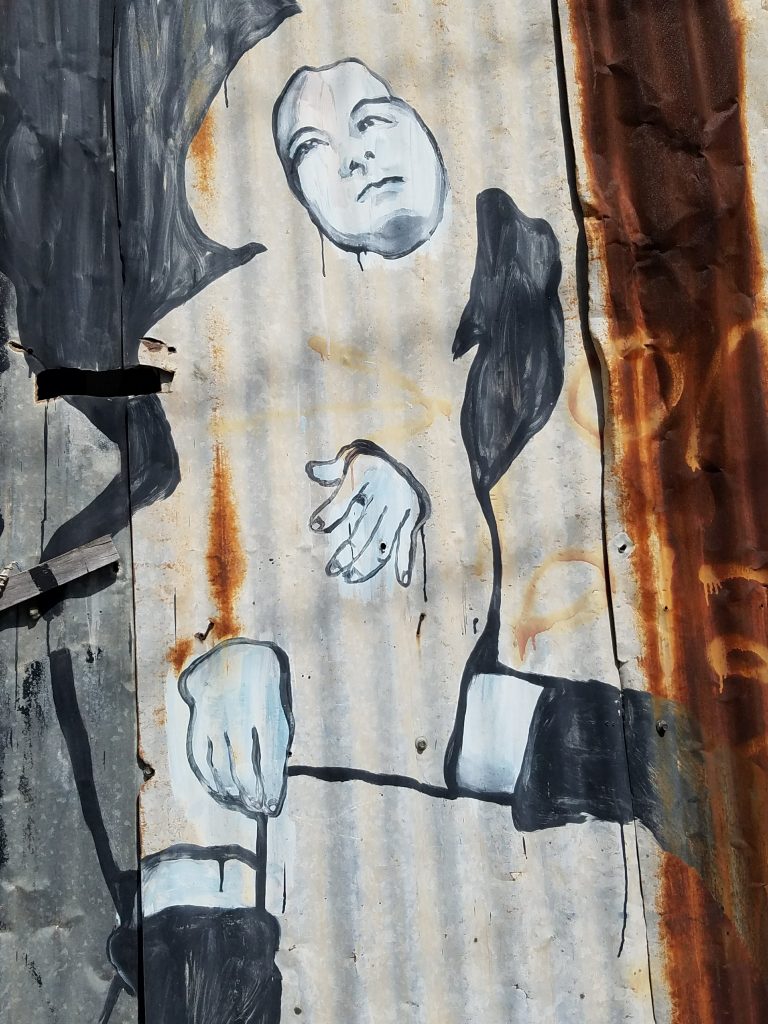 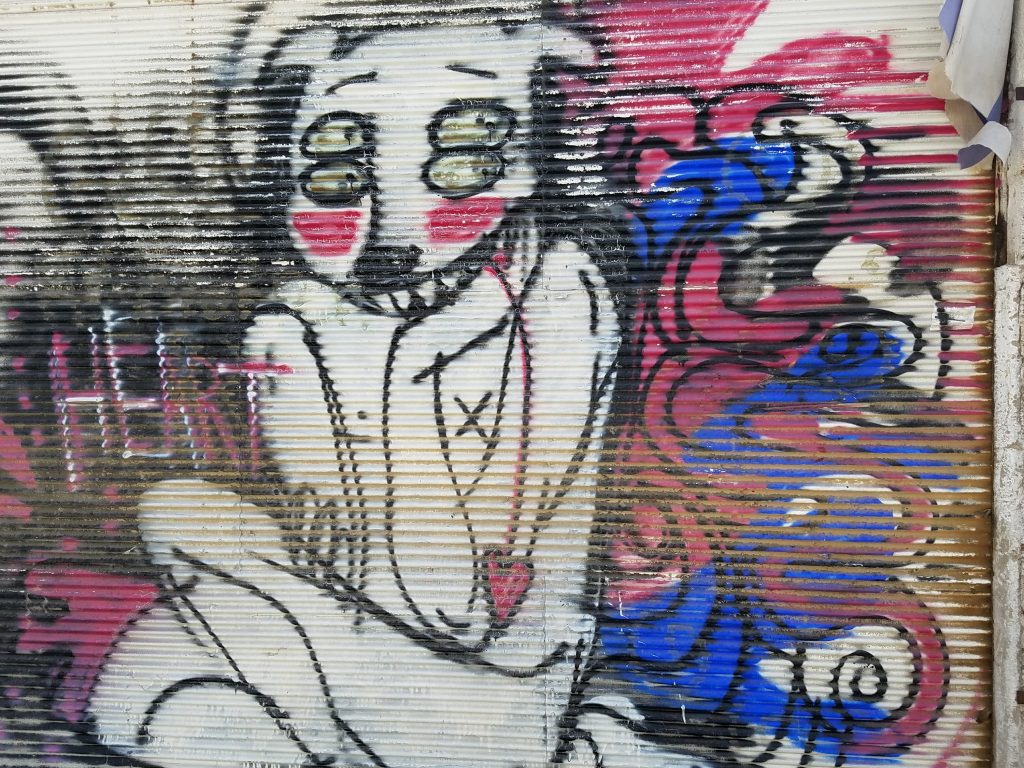 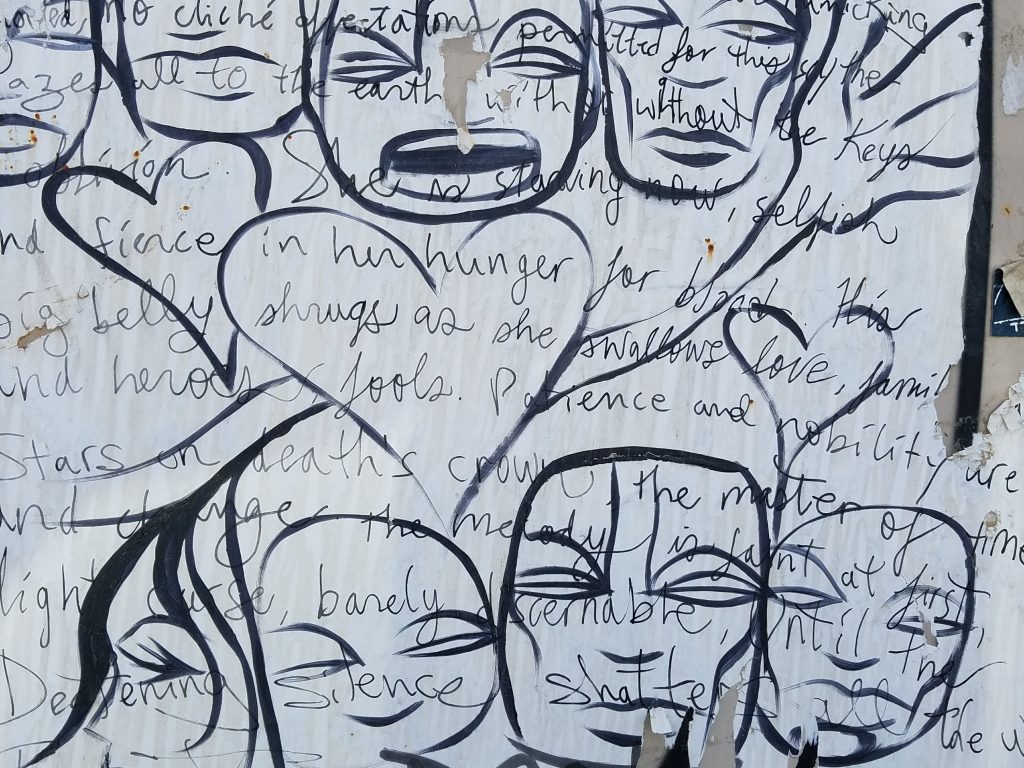 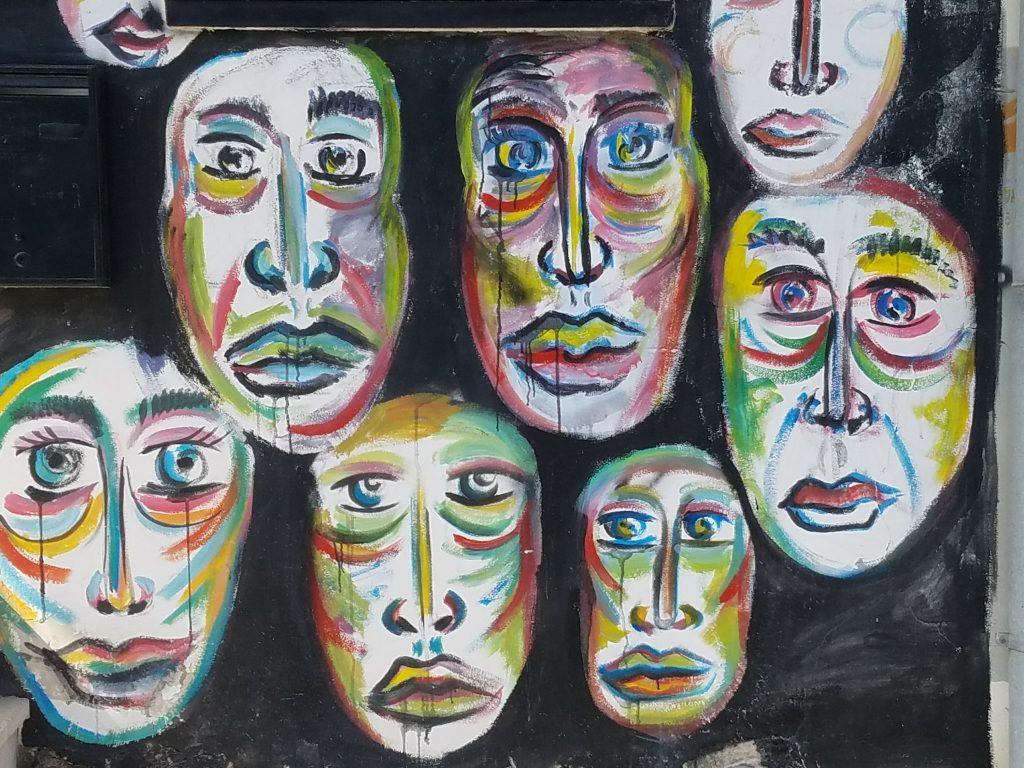 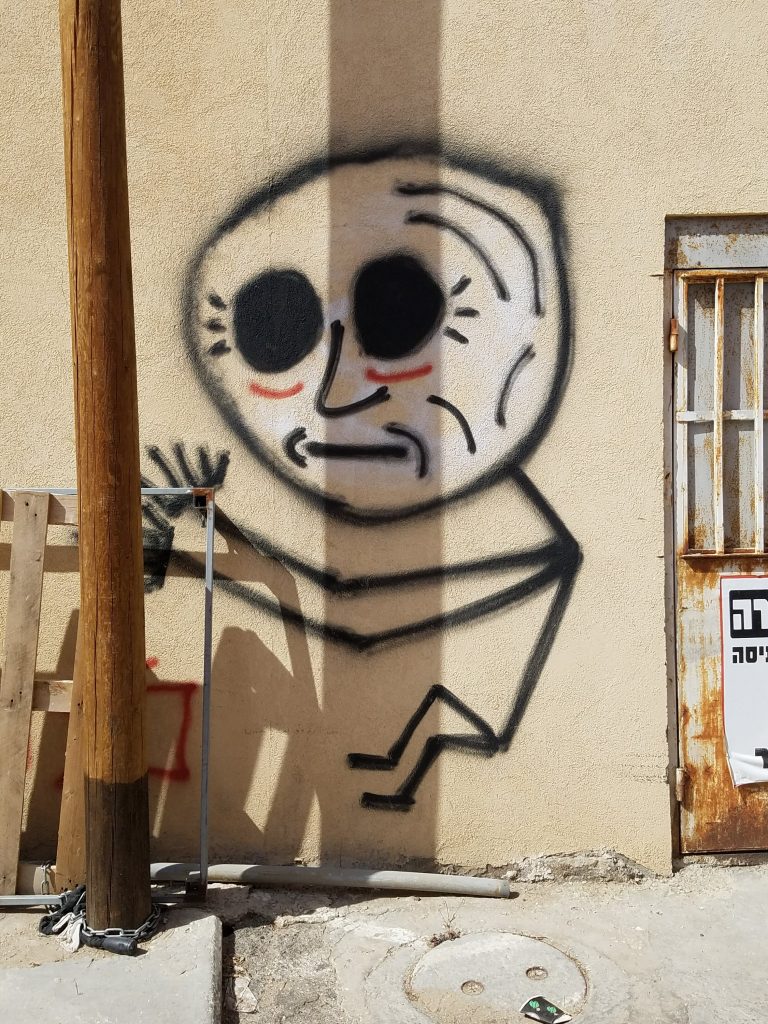 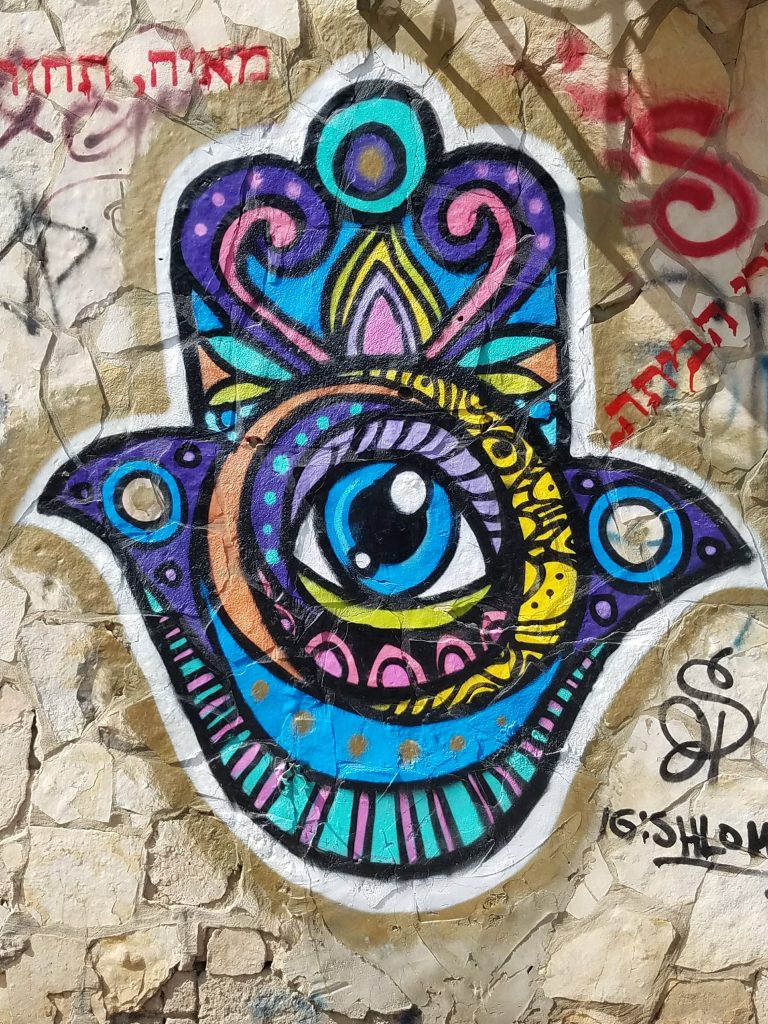 After walking around a bit, I noticed works that seemed similar. The style seemed consistent, as if drawn by the same hand. I started actively looking for works by this artist, an activity that became a kind of a game for me and my kids. It reminded me of our trip to London a couple of years ago, and of how we enjoyed doing the same there.

I later found a signed work by the artist in a different neighborhood. That’s how I learned of Sara Erenthal and her work. 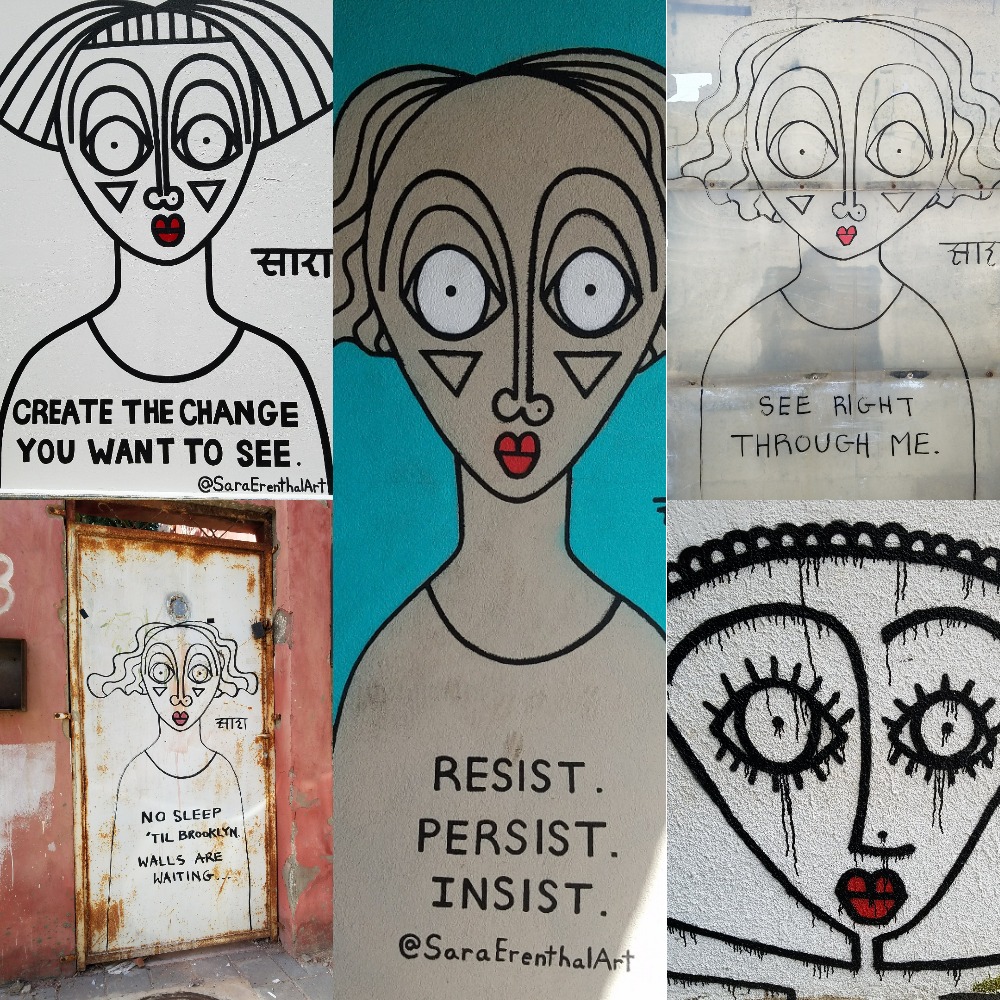 As I was about to leave the neighborhood, I saw a big sign on top of a building. Only then did I realize why the municipality allowed all that graffiti. The entire neighborhood, it turns out, is deemed for demolition. Soon brand-new sky-scrapers will replace the old, paint-covered buildings. 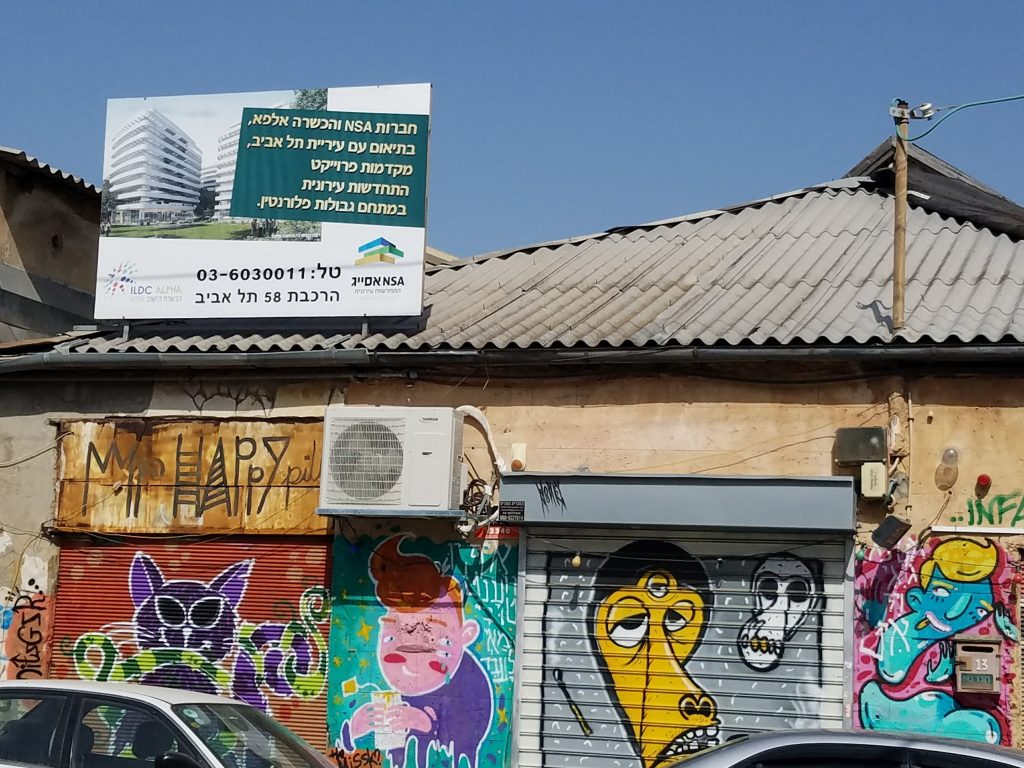 So, if you find yourself in Israel soon, go check Florentin out before it disappears. There are special graffiti tours you can take, and even graffiti workshops!