A few weeks ago (or was it a lifetime ago?) I described the design process behind Lavender Morning. Only briefly did I mention the series it is a part of, the Colors of the Day Series.

When I worked on my first-ever quilt series, the year-long Calendar Quilt Series, I realized that I enjoy creating a series of quilts more than I do working on a one-of piece. Stand-alone pieces are great, but a series gives me more structure, and allows me a wider range of exploration. It’s a deeper study into a design challenge or an idea.

After I completed the Calendar Series, a year-long project, I was left with the great emptiness that follows the completion of a big project. It took a while to come up with the next idea. I wanted to continue working with abstracts. I hoped to further explore colors, shapes, textures and compositions. So I started working on a series I tentatively called “Color Explosion.”

As I was working on it, however, I realized that the name was wrong. Although colors, shapes and textures were a central part of this series, other images came into my mind as I was creating it. Associations related to the colors I was using, or even to the fabrics themselves. It also brought up memories from related trips I took, which in return influenced the final outcome. I changed the name to “Colors of the Day” instead, and it all clicked together.

The Colors of the Day Series includes four quilts representing different parts of the day, each influenced by memorable places the colors reminded me of. These quilts are bigger than those of the Calendar Series. Most of these are 16″ x 20″, except for Berry Twilight which is 21″ x 24.”

I did not create these quilts in a chronological order. Actually, I made the last one first. But the best way to view them is from morning to nightfall. 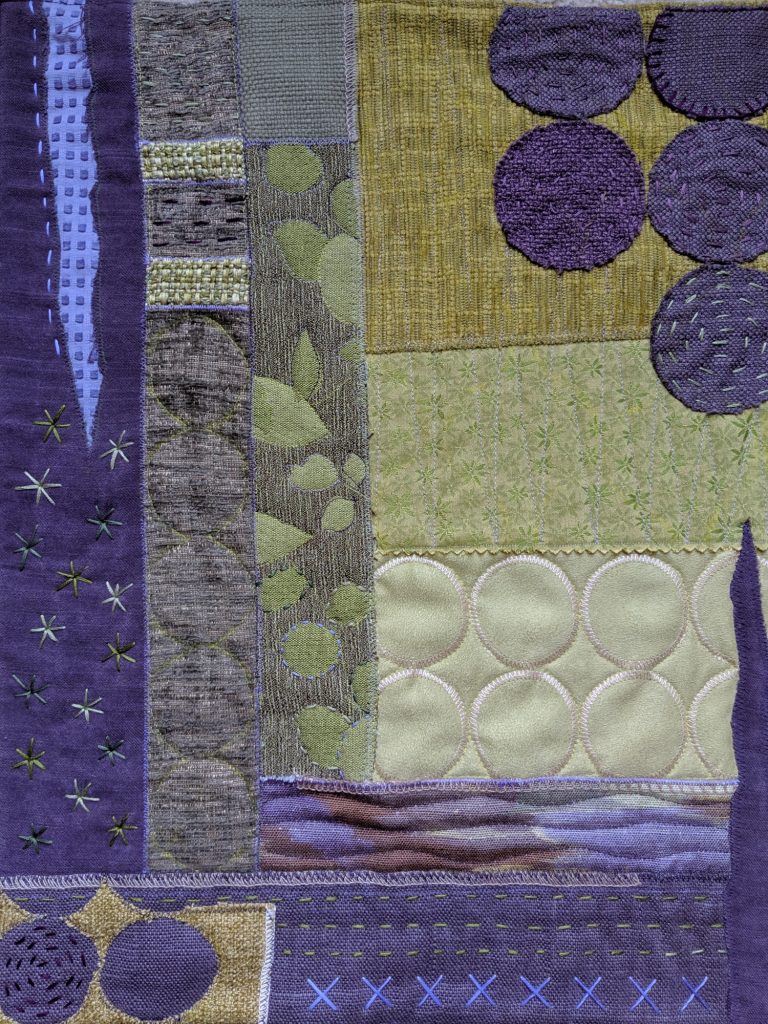 Lavender Morning was the fourth and last quilt I made in this series, thought it should be seen first. I described the design process of this quilt in a separate blog post.  Earlier projects influenced the color palette of this work, and the fabrics themselves dictated the final composition (as they do in most of my work). However, as I was working on it, I kept thinking of spring, and of the sprawling fields of lavender I saw in Tomita Farm in Hokkaido, Japan, two summers ago. We visited the farm early in the morning, to avoid the crowds, and so these colors remind me of the freshness of morning. 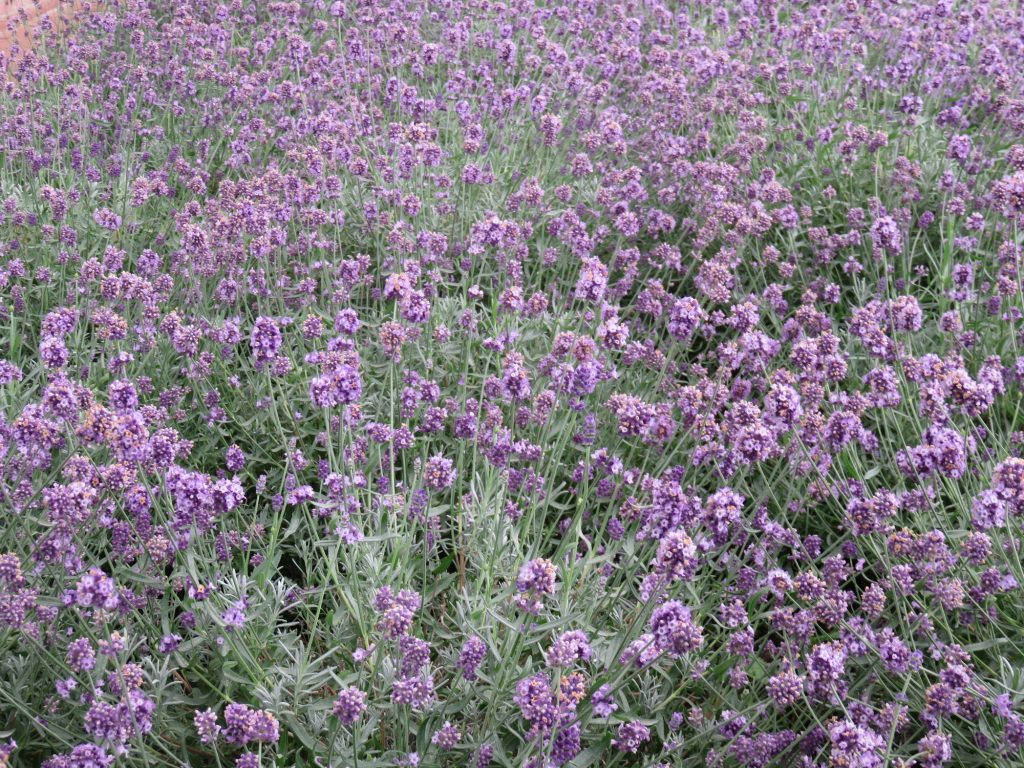 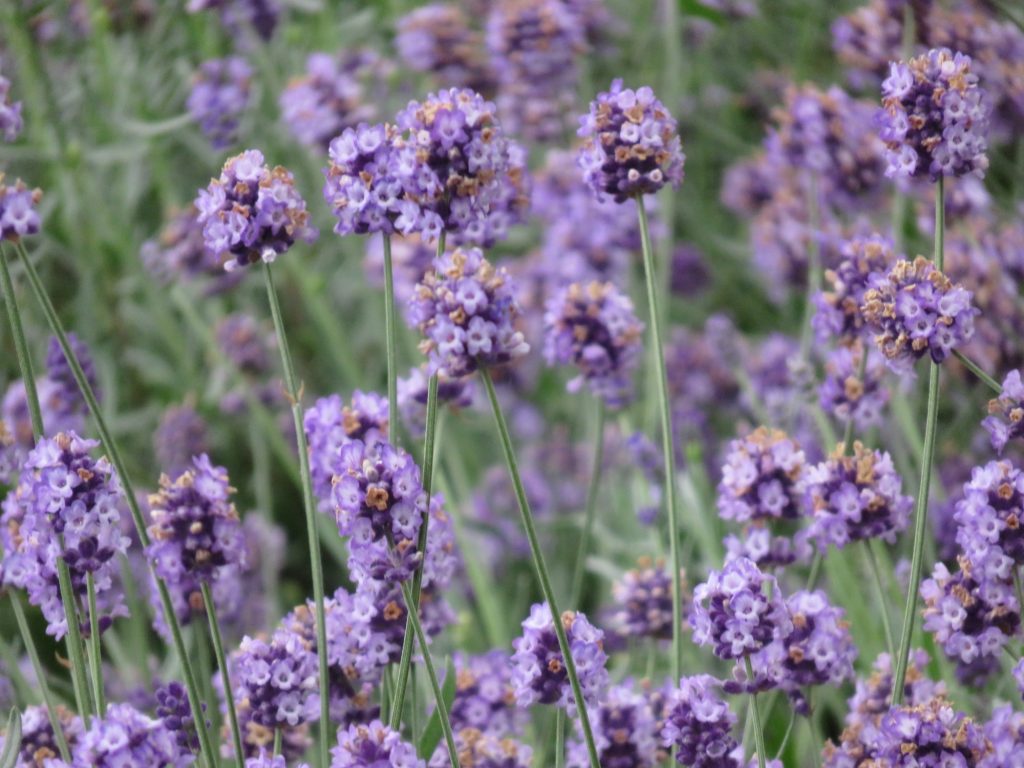 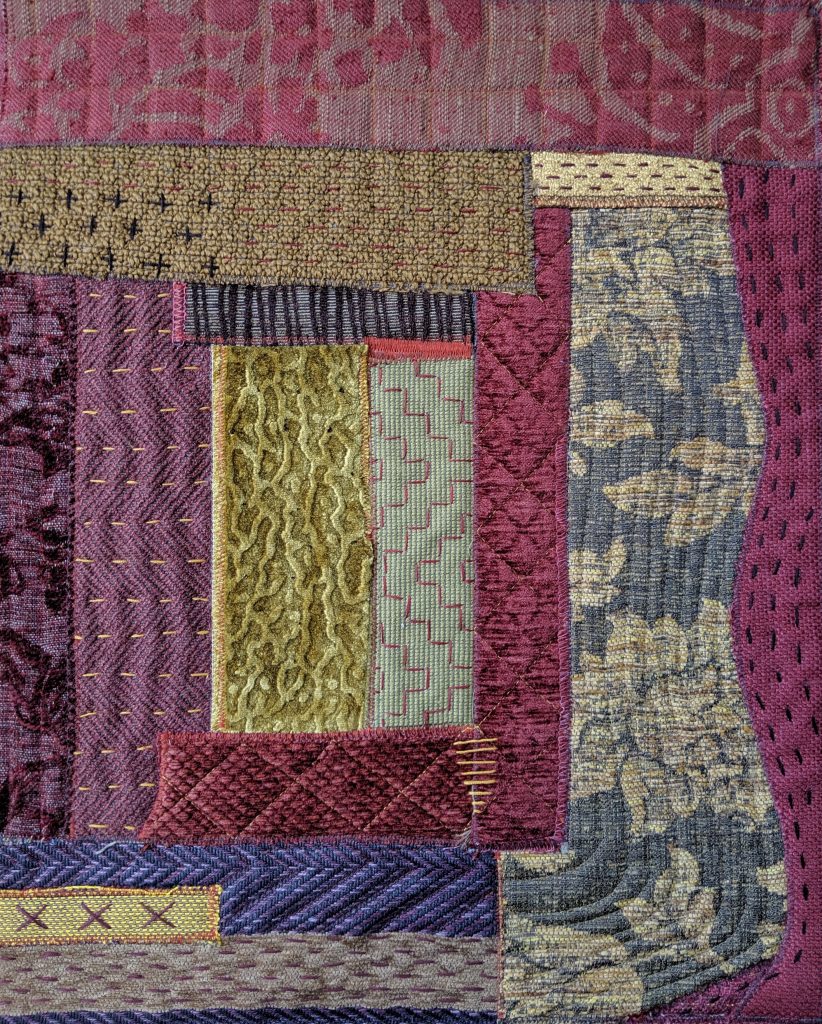 I made this quilt in the autumn, my favorite time of year (and usually also my best sewing season). The colors of fall were all around me when I worked on it. I enjoyed hand stitching this piece as I sat by the fire, on the first cold evenings of the season. This quilt made me think of the maple tree outside my sewing room window, and how it glows when the sun hits it in the afternoon. It also reminded me of an afternoon trip I took one fall, many years ago, to the enchanted autumn forests of New England. This was the third piece I created in this series. 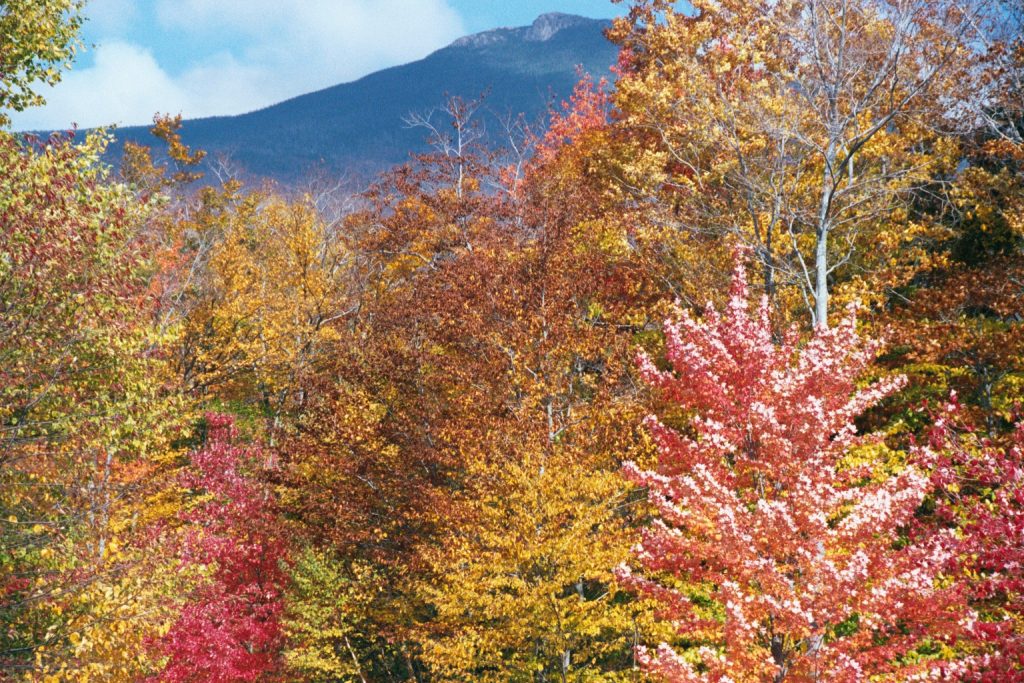 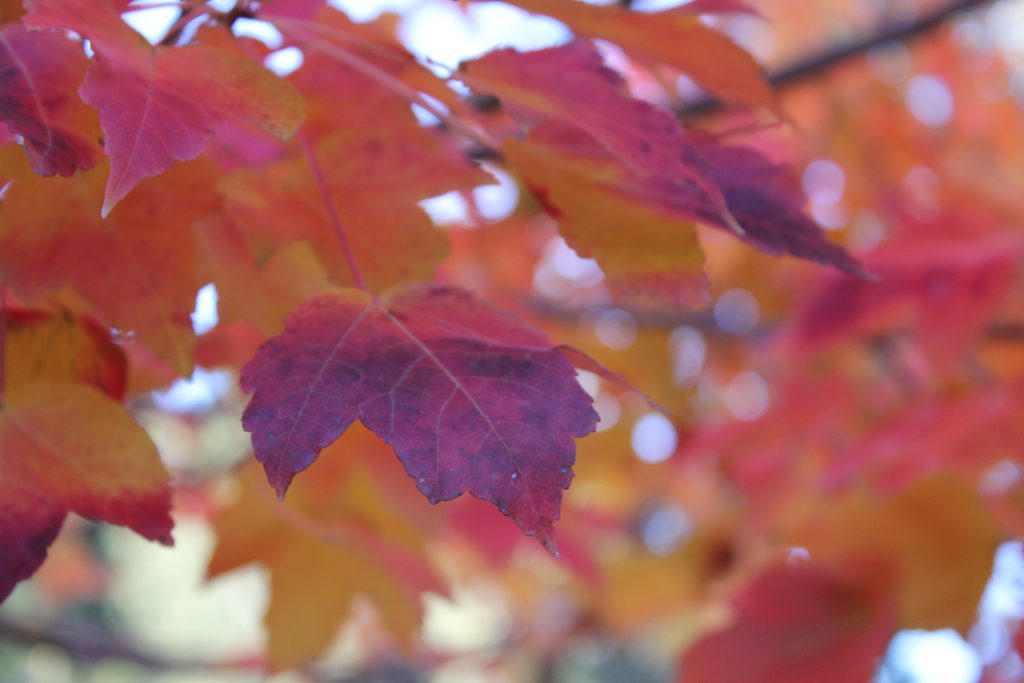 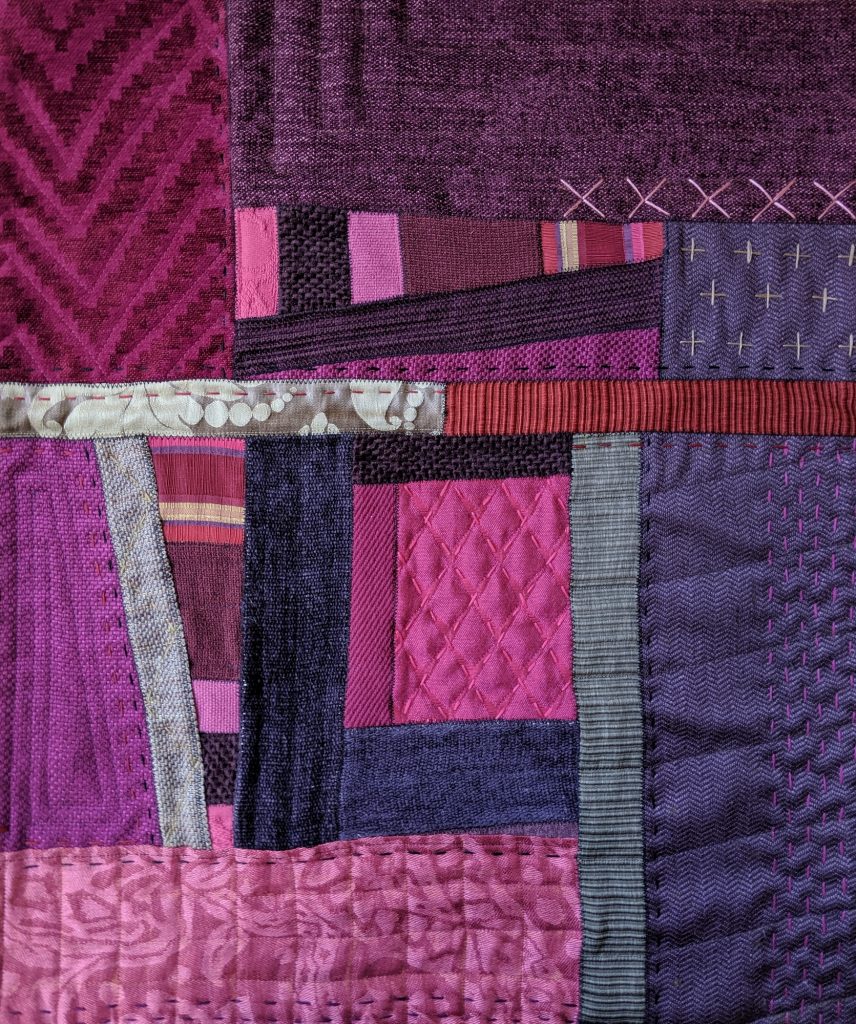 This quilt, the second I made in the series, is also the largest. It incorporates some of my favorite colors. Working on it gave me great pleasure, and reminded me of some of the fantastic sunsets we’ve seen during a month-long RV trip we took to the US Southwest a few years ago. Nothing beats the beauty of desert sunsets! They are truly breathtaking. The pictures below don’t do the real desert sunsets justice, but will give you some idea of what I had in mind. 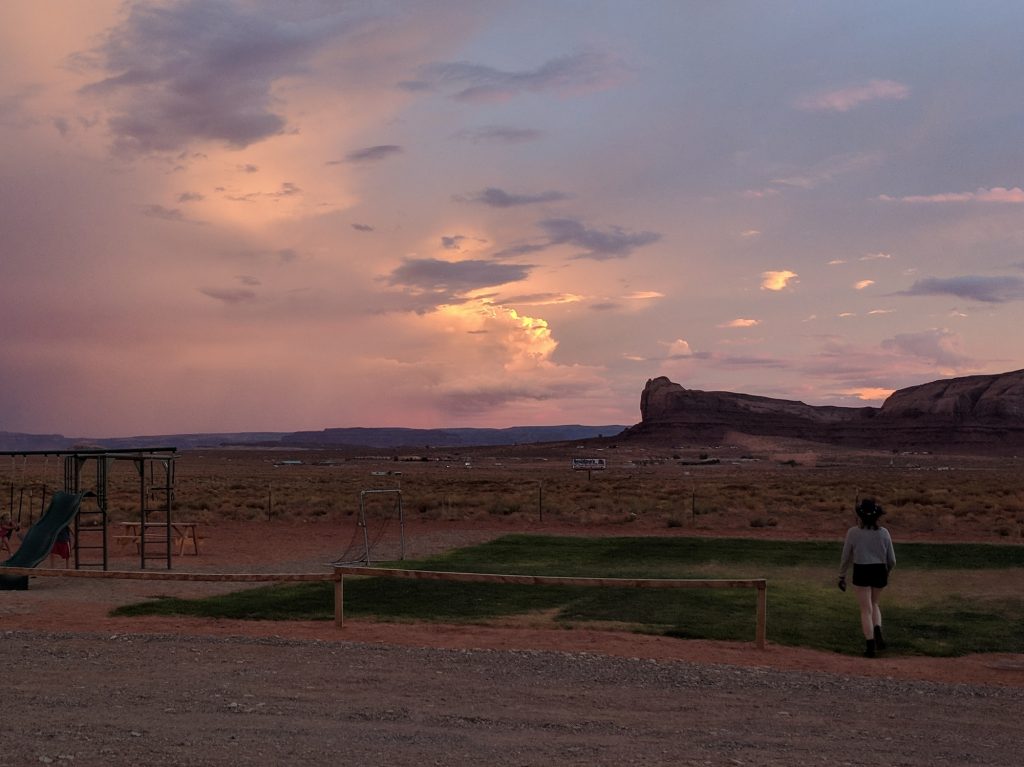 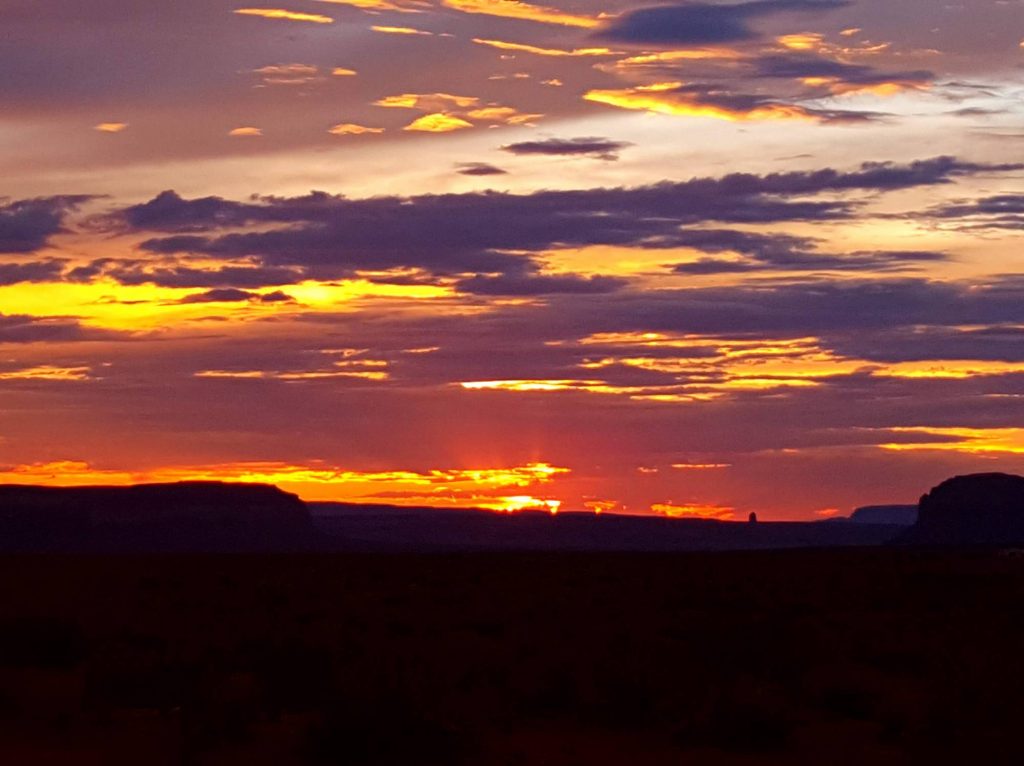 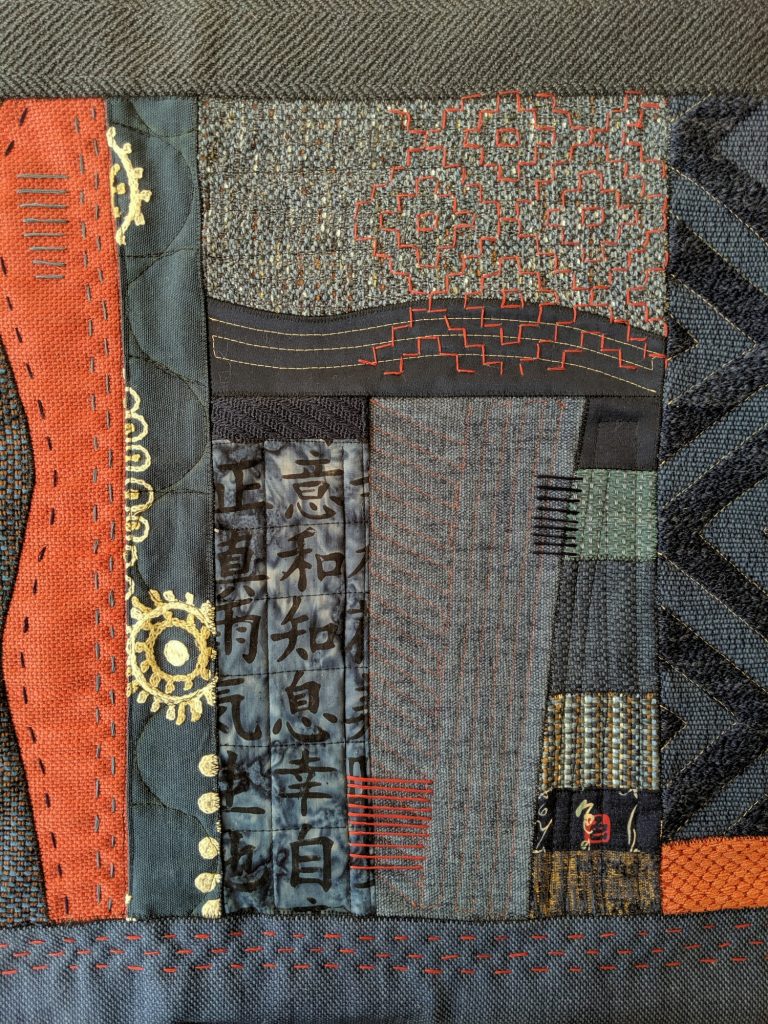 I created Indigo Night as the first piece in this series. The inspiration for this came from Asian-inspired scraps I had lying around my sewing room, remains from quilts or bags I made earlier. This quilt gave me an excuse to play with indigo colors, and juxtapose them with bright orange-reds. It was also a wonderful reason to incorporate some of the Sashiko stitching I’ve been enjoying using in the last few months. From the very beginning, it made me think of the night markets I saw in Asia. Many years ago I lived in Asia for several years, and visited night markets often. More recently, I took my family to  visit Taiwan and Japan, and was happy to introduce them to these amazing places. Night markets are full of life, colors, smells and tastes, and this quilt reminds me of them all! 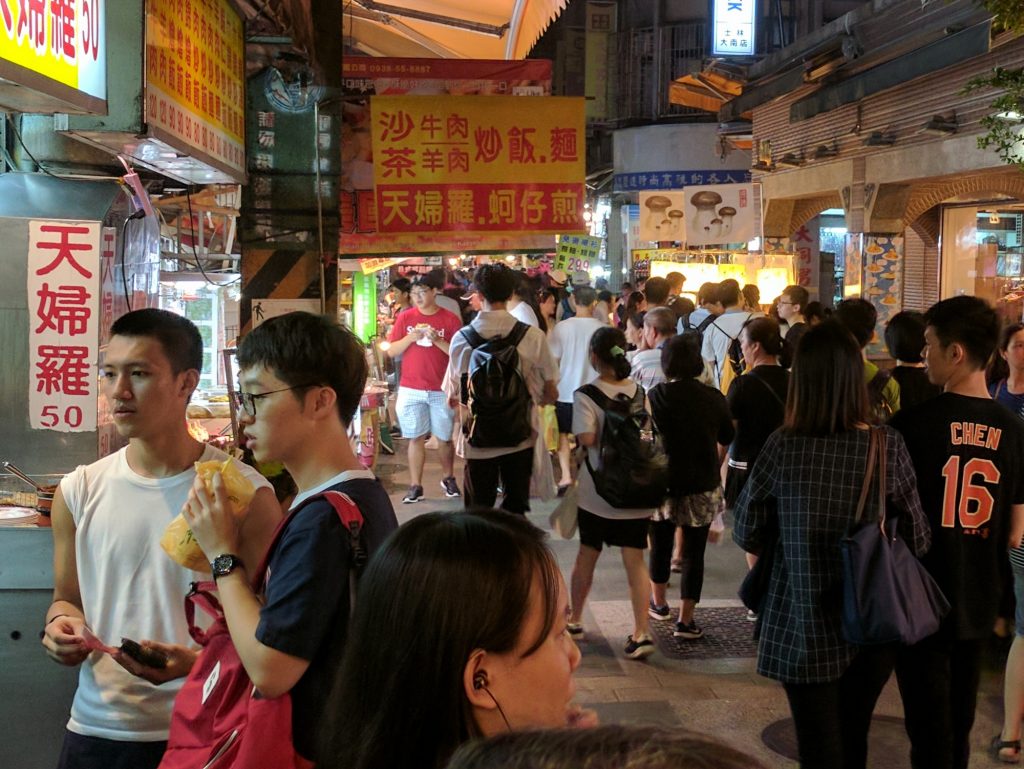 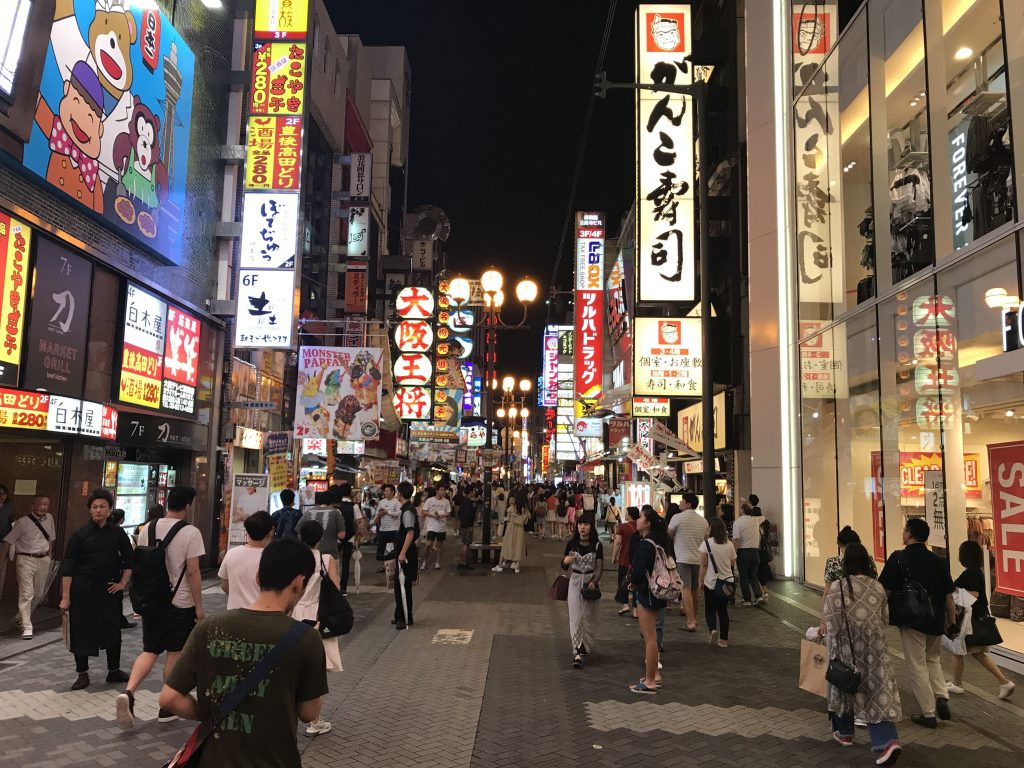 When I made these quilts life was still normal. But now I am writing this post while Sheltering in Place. What a difference can a few weeks make! Looking back at the pictures and places that inspired this series fills me with great sadness. Travel of any kind is currently impossible. The night markets, farms, campgrounds and trails are closed. The ordinary is now threatening. The world has shrunk to the space we’re confined to. Nothing is as it was, and won’t be for a long while. At least the memories are forever, though, and the beauty of nature is still there, humans or not…

Here is the complete Colors of the Day Series: 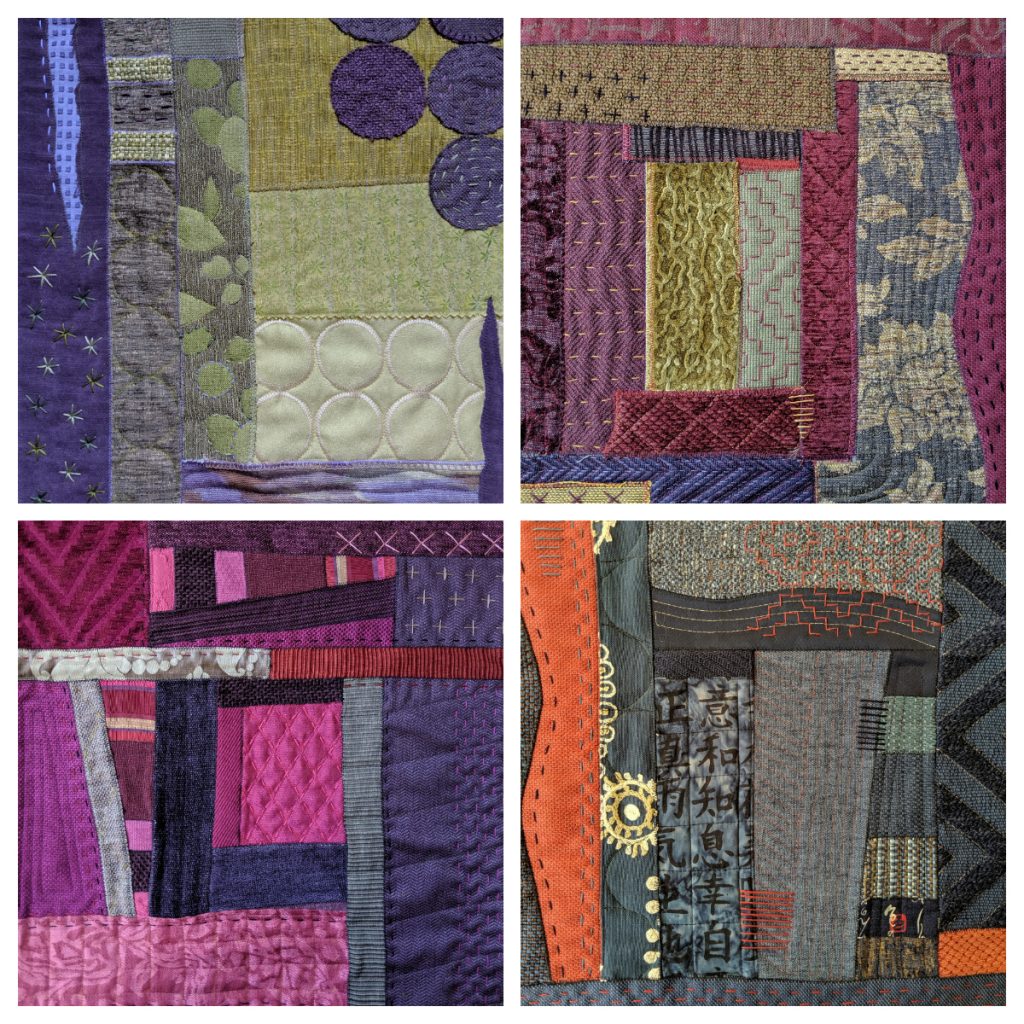 My quilts design themselves. In a way, all of my creations do. That’s because much of my inspiration comes from the fabrics themselves. Well, sort of.

I make both functional and fine art, and the two often influence each other. This was certainly the case with my latest quilt, Lavender Morning.

A while back I showed you the stitch meditations I made during my jury-duty wait. One of them was a small olive and lavender piece. I really loved the way it looked. 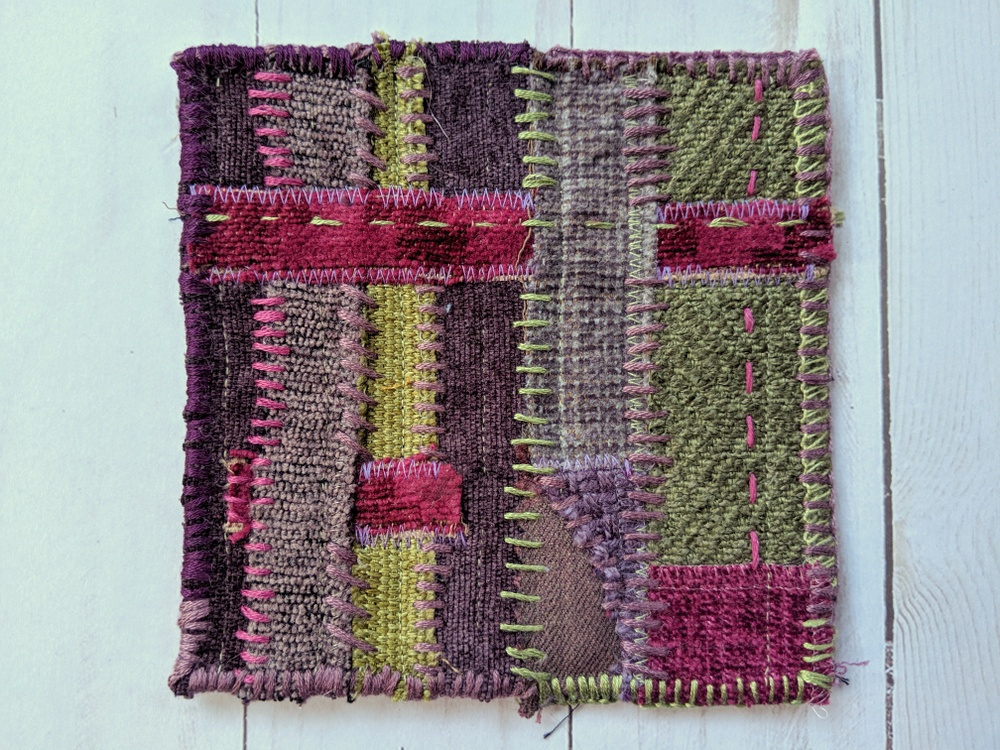 When I went on immediately afterwards to make fourteen artsy pouches, I made one in a similar color combination. That was when I realized that I really needed to make a bigger art quilt using the same palette. 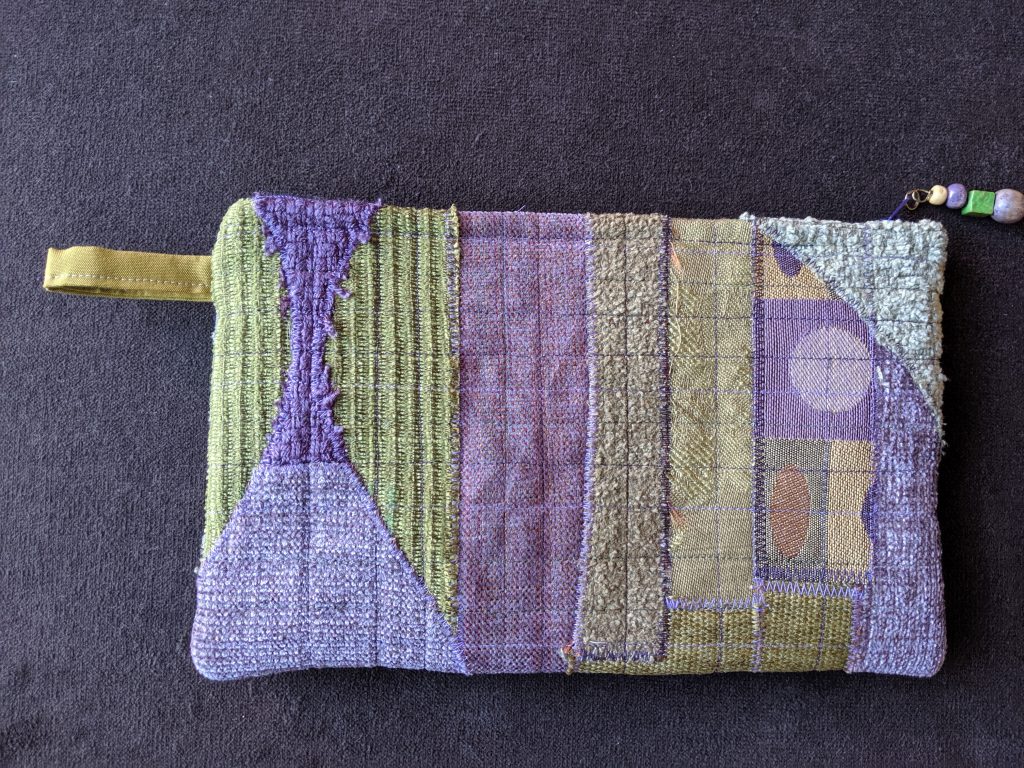 Last year, I made three quilts in a series I tentatively called “Color Explosion,” but later renamed “Colors of the Day.” I wanted to add one more piece to that series, and this color combination seemed just right.

I gathered the fabrics I had in those colors, and started playing. I lay them on my recently-excavated design carpet (did I mention cleaning up my sewing room at the end of last year?). Then I moved them around until I found a composition I was happy with: 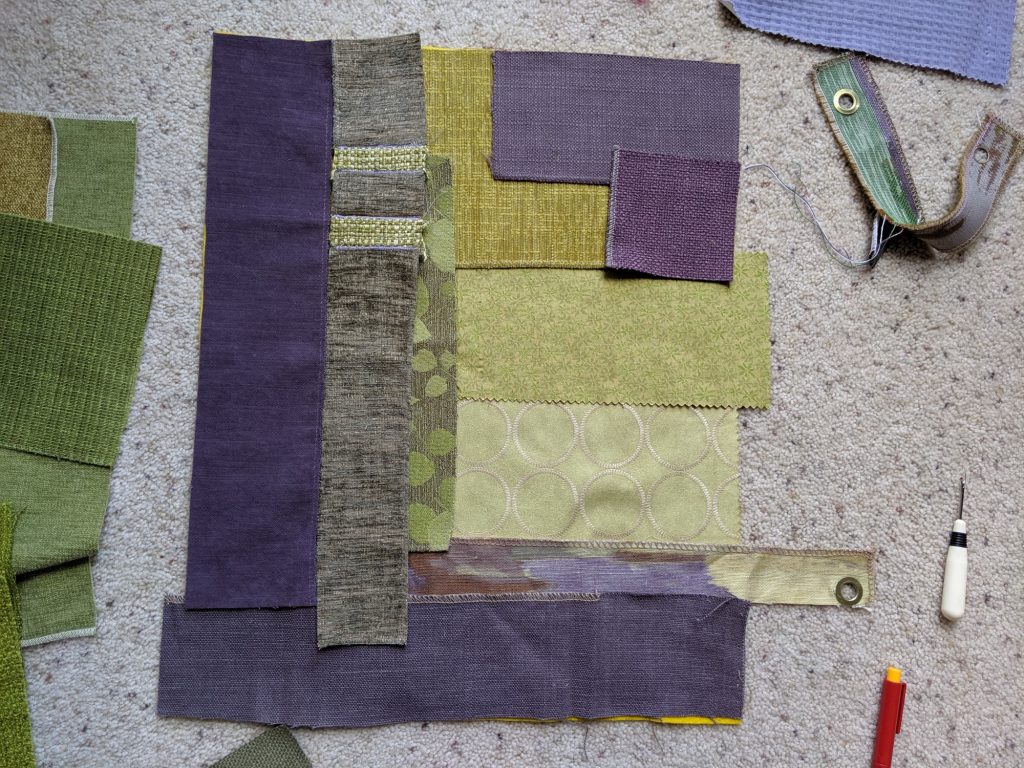 I tried to listen to the fabrics. The ikat-like stripe on the bottom wanted a design companion, so I added a fissure on the left. 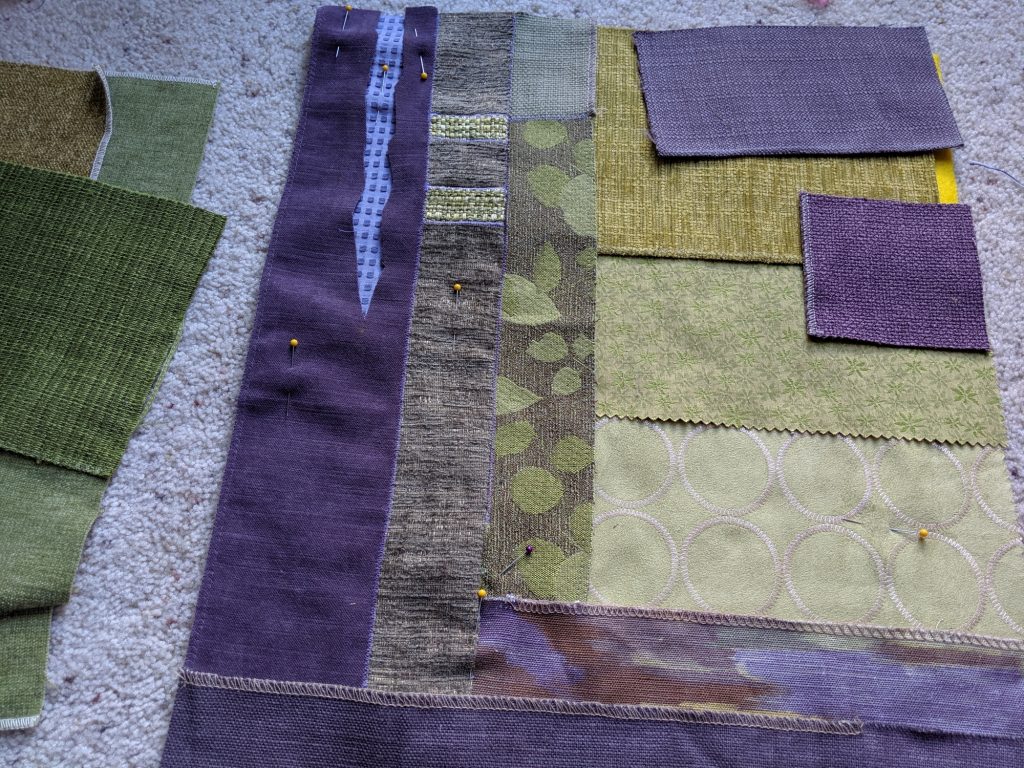 I then added one on the right, too, for balance. The light green fabric with the circles stood out to me, so I decided to make circles a central motif in this work. I played with filled and empty circles, trying to balance both the composition and the colors. Moving circles around took quite some time. 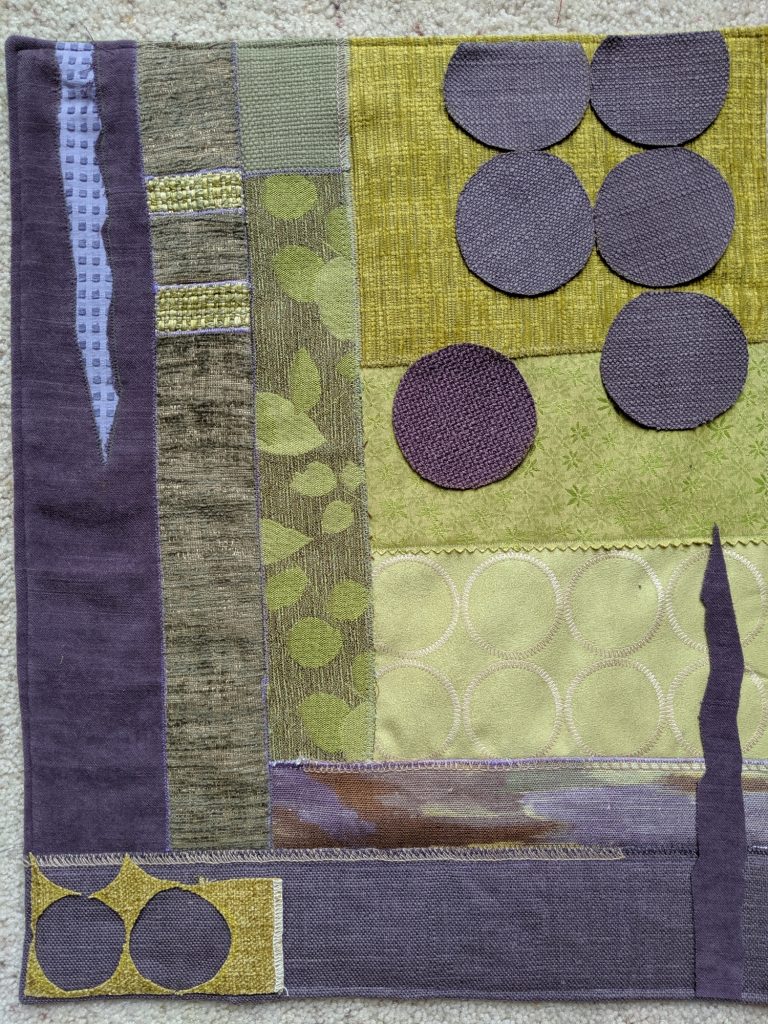 I settled on this: 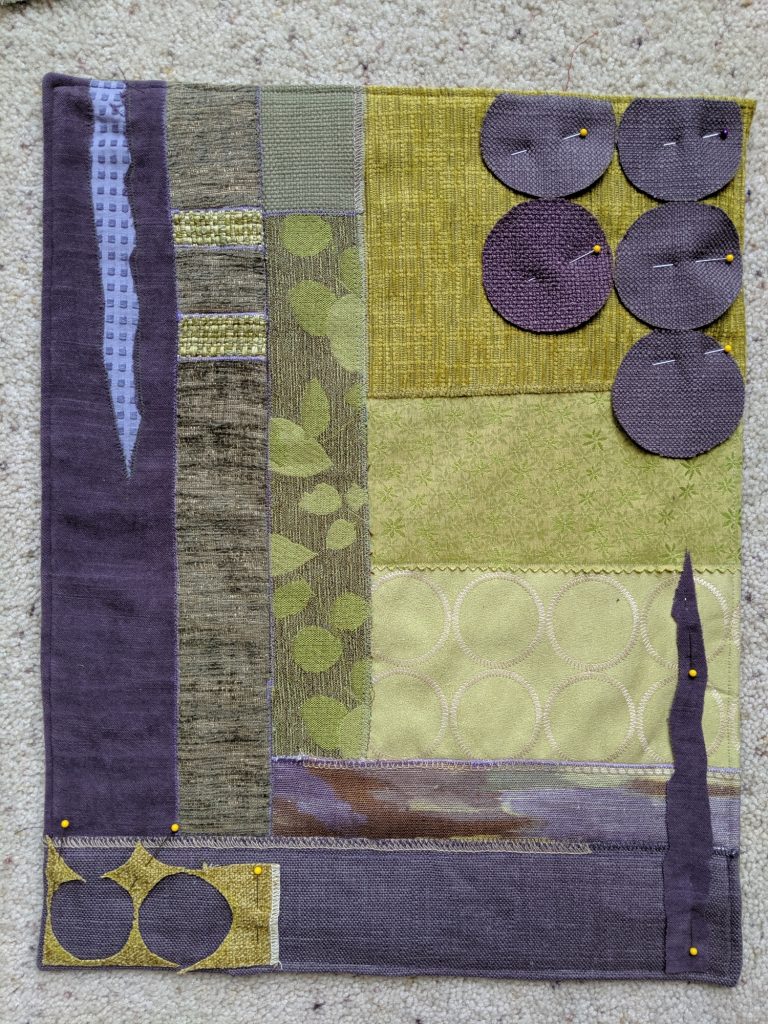 For the previous quilts in this series, I mixed machine quilting with hand stitching. Choosing embroidery floss for the hand stitching part is always one of the activities I enjoy most! 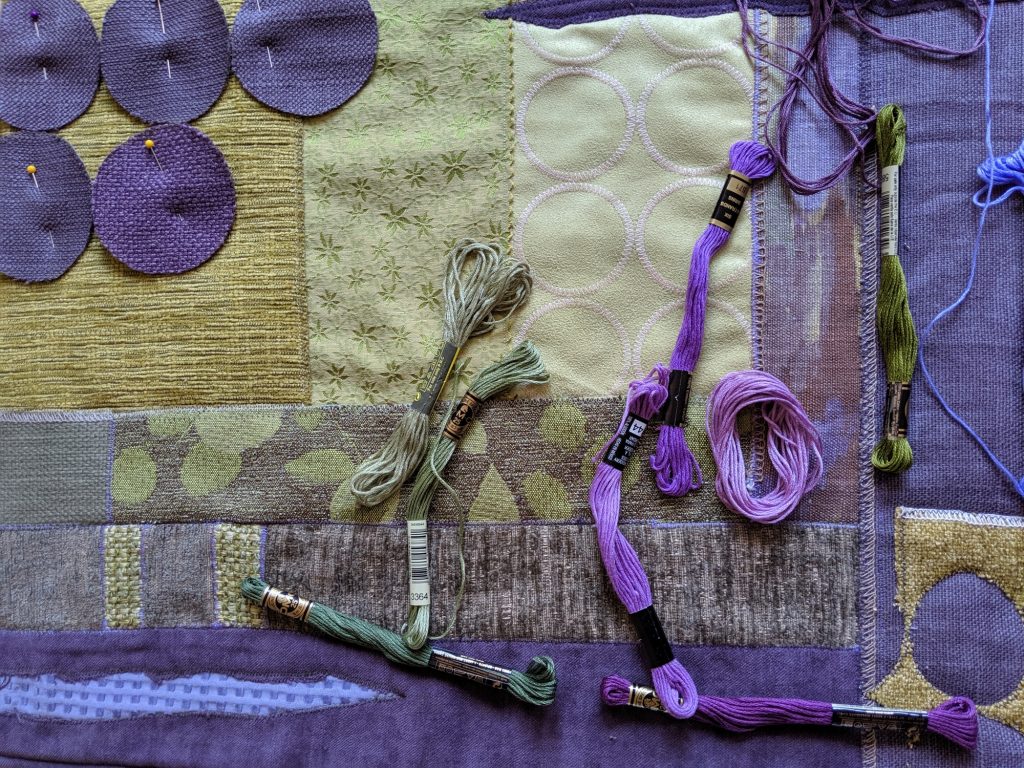 When I hand stitch, I like incorporating Sashiko stitching. I often enjoy combining different kinds of stitches in my work. I don’t try to be perfect. I’m not a machine, and believe that it’s the imperfections of the human hand that give a piece character. 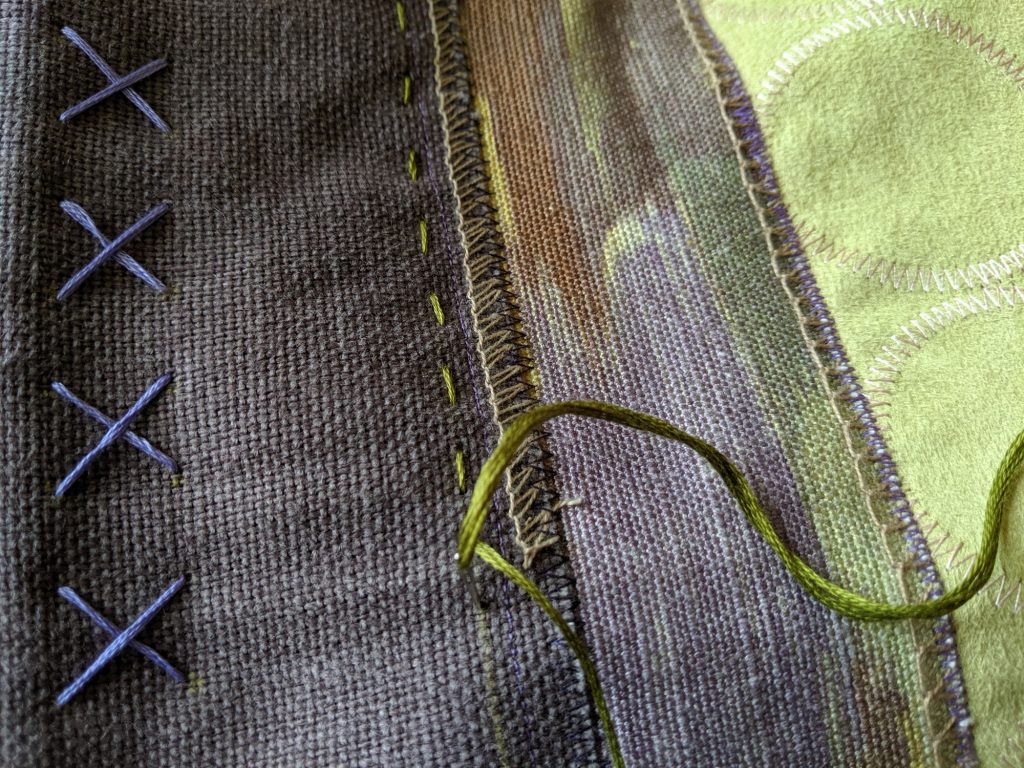 Some parts of the quilt, though, require machine quilting. Mostly parts where I want the fabric itself to shine, as machine stitching doesn’t “steal” the show the way hand quilting does. 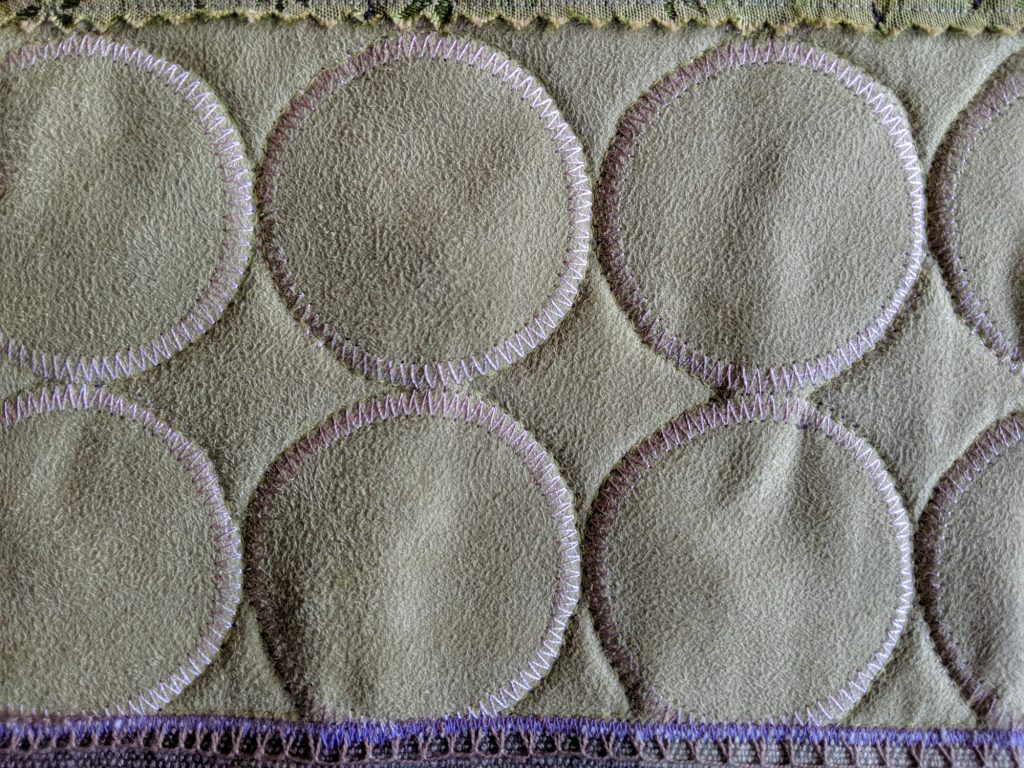 Sometimes, though, things don’t work out the way I want them to. After thinking long and hard about how to stitch the upper part of this quilt, I decided to go with wavy lines, to continue playing with the circular theme. I used a dark purple thread, but it just didn’t look right… 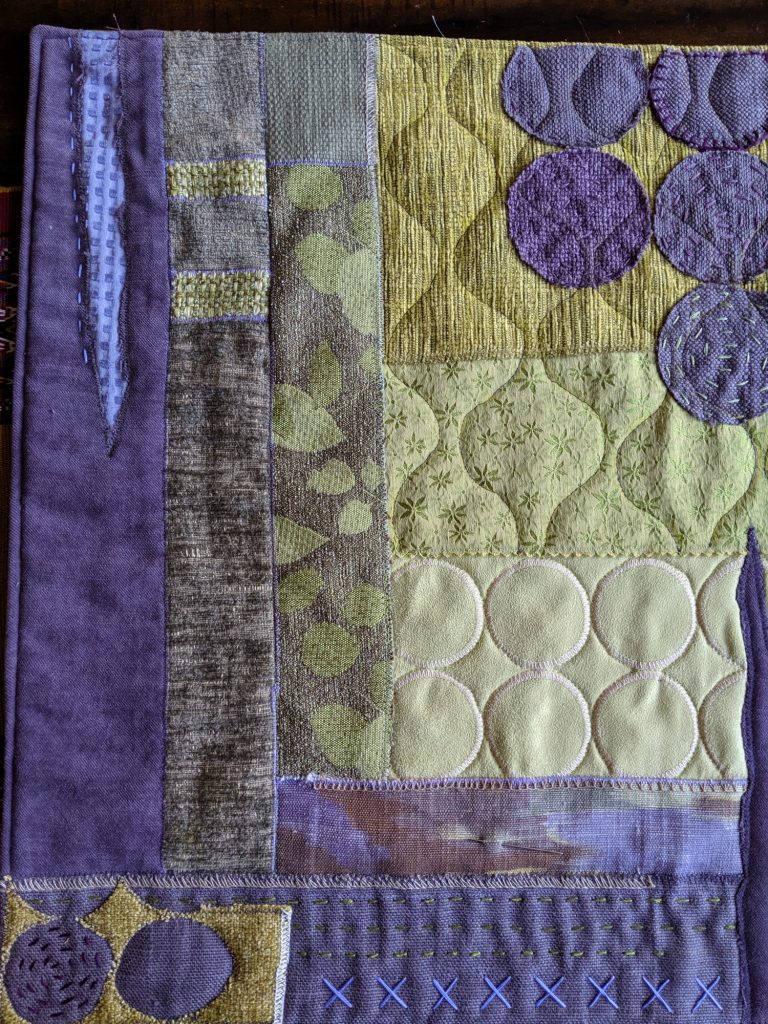 And so, I spent an entire afternoon undoing the machine quilting (I don’t recommend doing much of that if you can help it! Tedious work…): 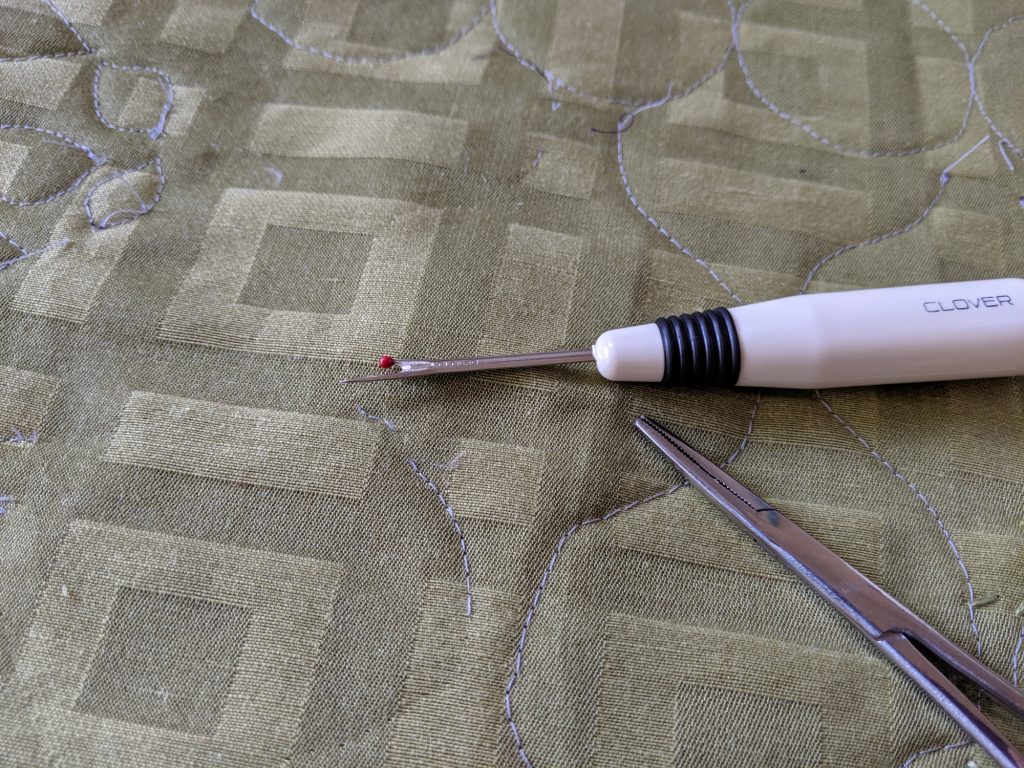 I replaced the wavy lines with zigzag stitches, in a lighter-colored lavender thread. Now the quilting was much less dominant: 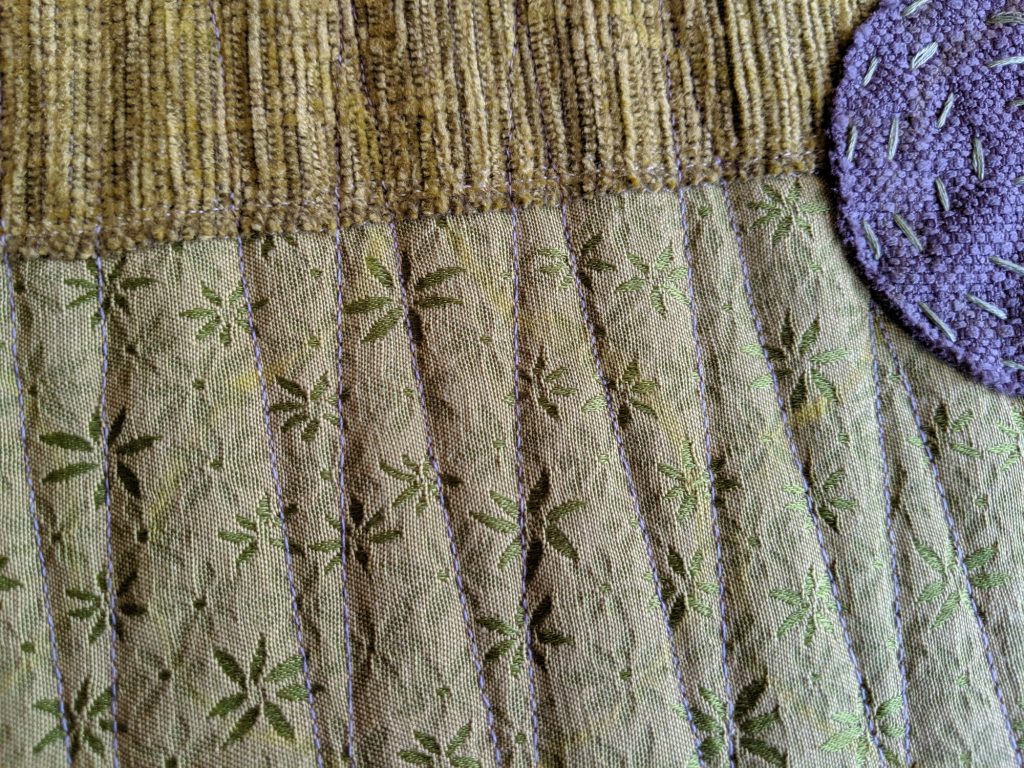 At that point, the flowery fabric above asked for design companions, too. So the stitching on the left-most panel involved uneven flowers in three different greens: 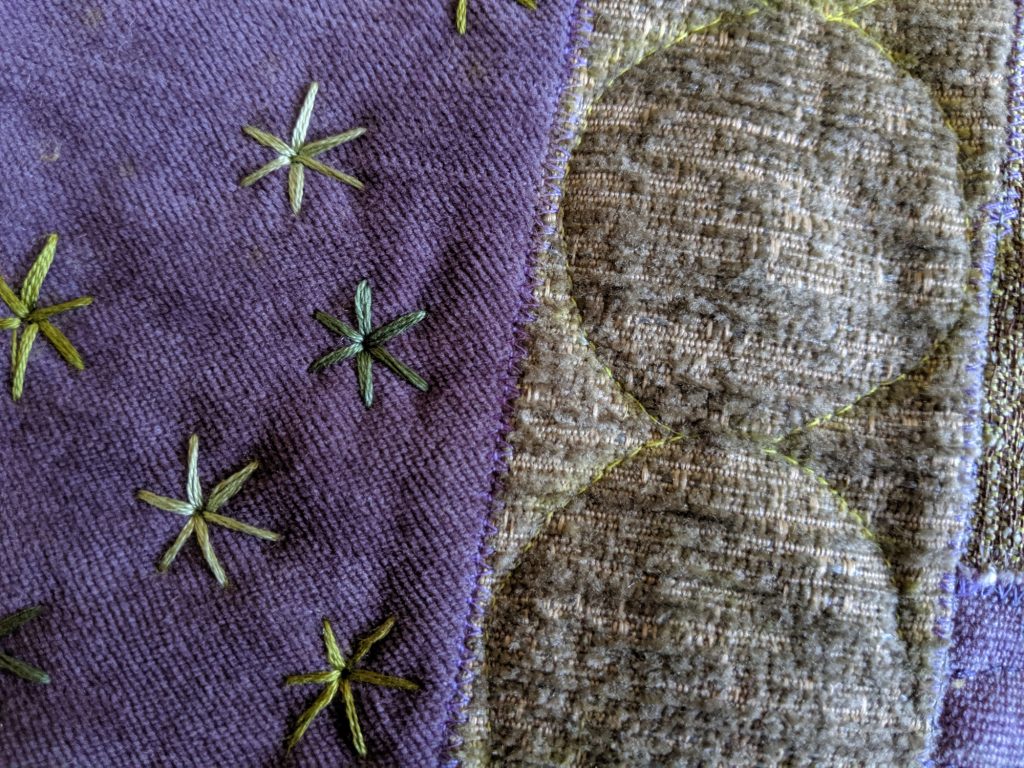 It just so happened, that I had similar flowers blooming in my garden right then! 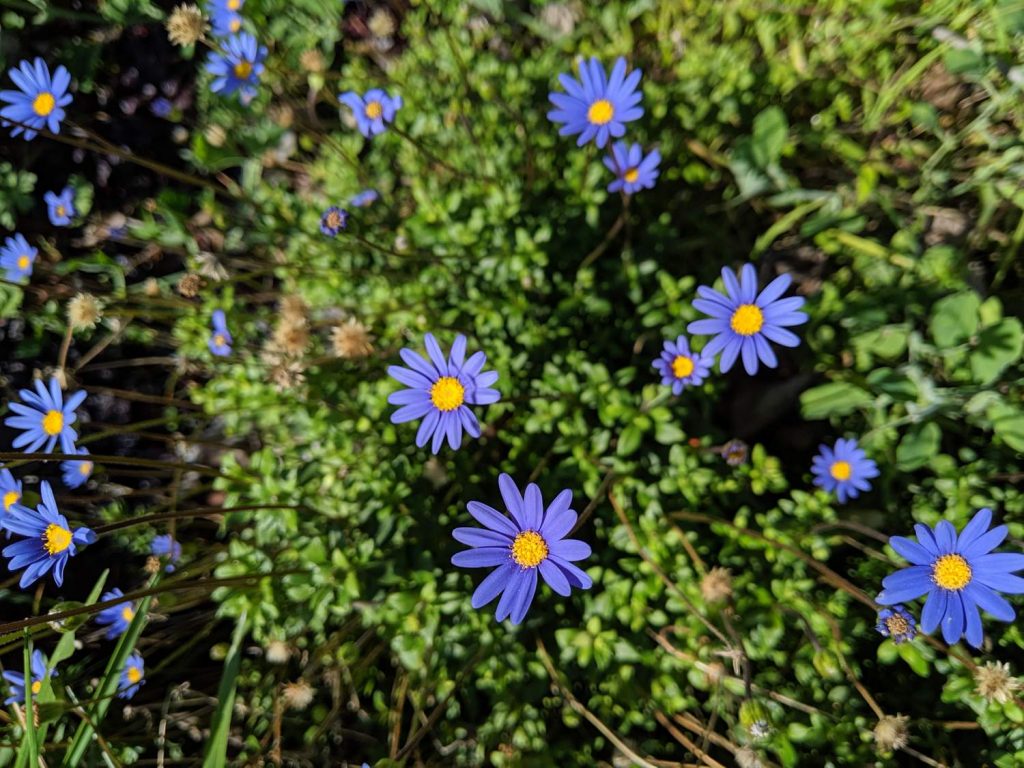 I used felt as batting for this quilt, and the top and back fabrics were rather thick. I also did a lot of spring fruit-tree pruning right around then, and ended up with rather sore hands. But I think it was worth it. Finally, the quilt was complete! 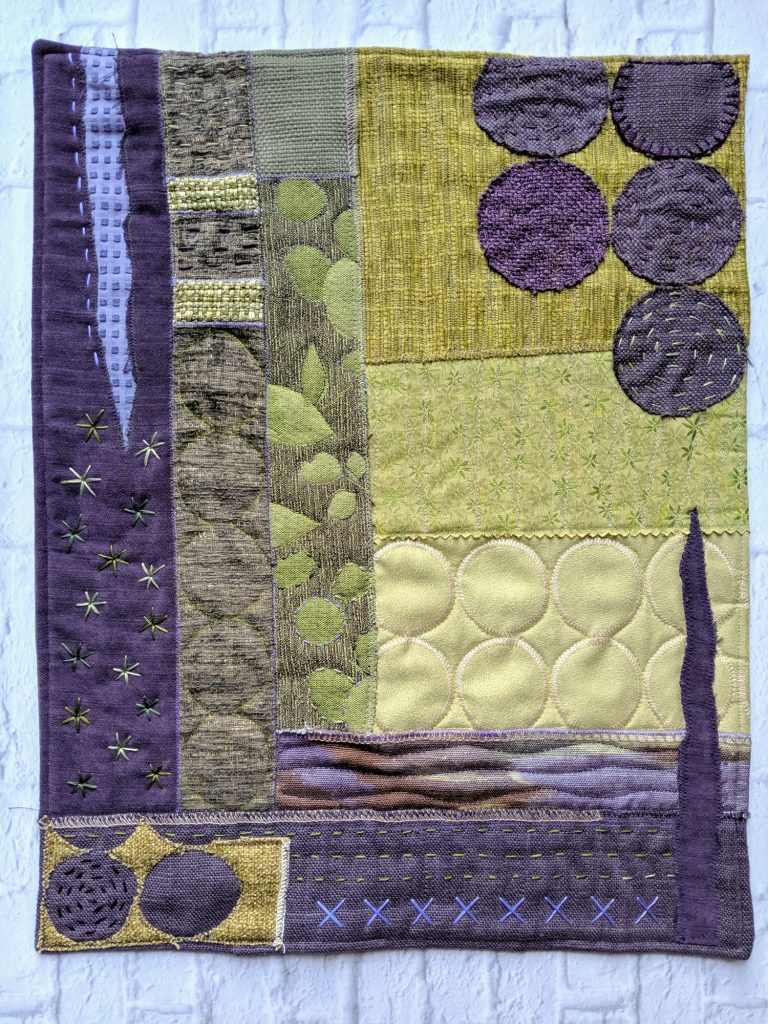