My family’s summer trip to Taiwan was rather short, so we tried to squeeze in as much as possible. We visited tourist sites, of course, as I mentioned last week. But I also took advantage of every opportunity to drag my reluctant kids to see some of the local Taiwanese arts-and-crafts-related shops and markets. They didn’t always like it, but that’s what happens when your mom is a textile artist and believes the arts to be an expression of local history and culture… Perhaps they will appreciate it one day (or not!).

There is an interesting, exciting, vibrant mix of traditional and modern arts and crafts in Taiwan. We got to see but a small sample of it. I am sure there are many other interesting things we didn’t get to. If you know of any, please feel free to add them in the comments!

Traditional Chinese arts are very much alive in Formosa, and are evident everywhere. In museums, temples, shops, markets and more. I will not discuss the exquisite displays in museums, or the more common ones in temples or architecture. Instead, I’ll talk a little about the workshops, shops and markets we encountered.

While walking down Dihua St. in Taipei, for example, we came across a small traditional paper lantern store. The Lao Mian Cheng Lantern Shop has been operating since 1915! 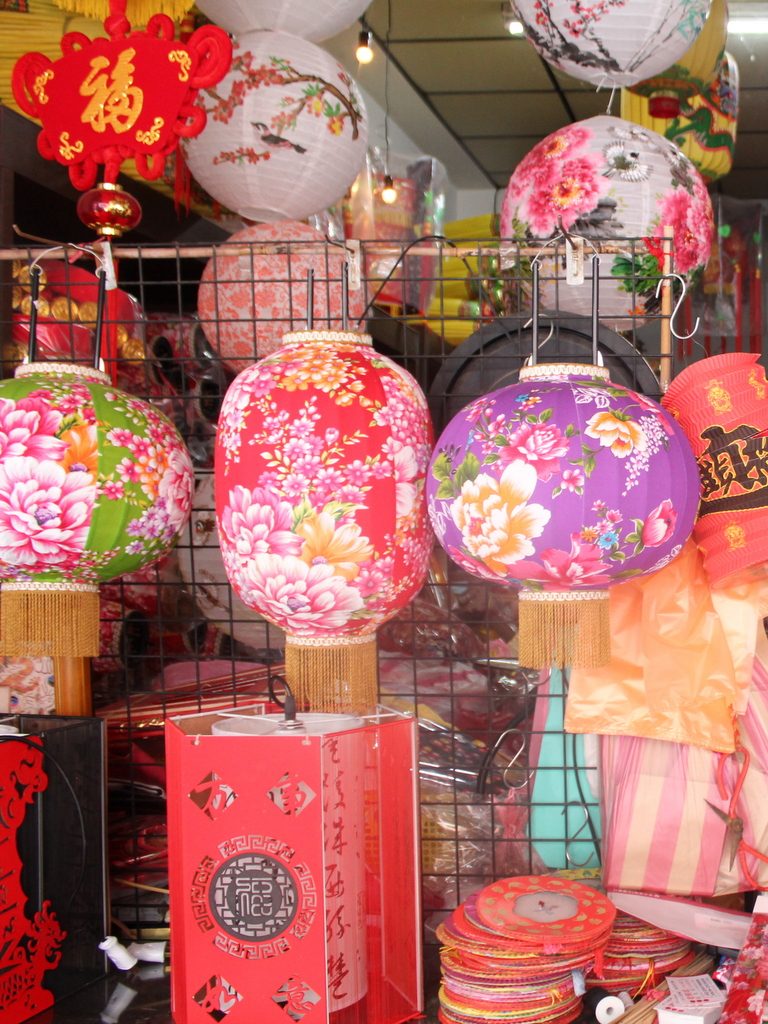 We saw many small carving stores, where you could have your name carved on a chop, for example. But the most impressive display of carvings we encountered was at the pricey, upscale jade carving store on top of Taipei 101. Every visitor to the building has to exit through this lavish tourist trap: 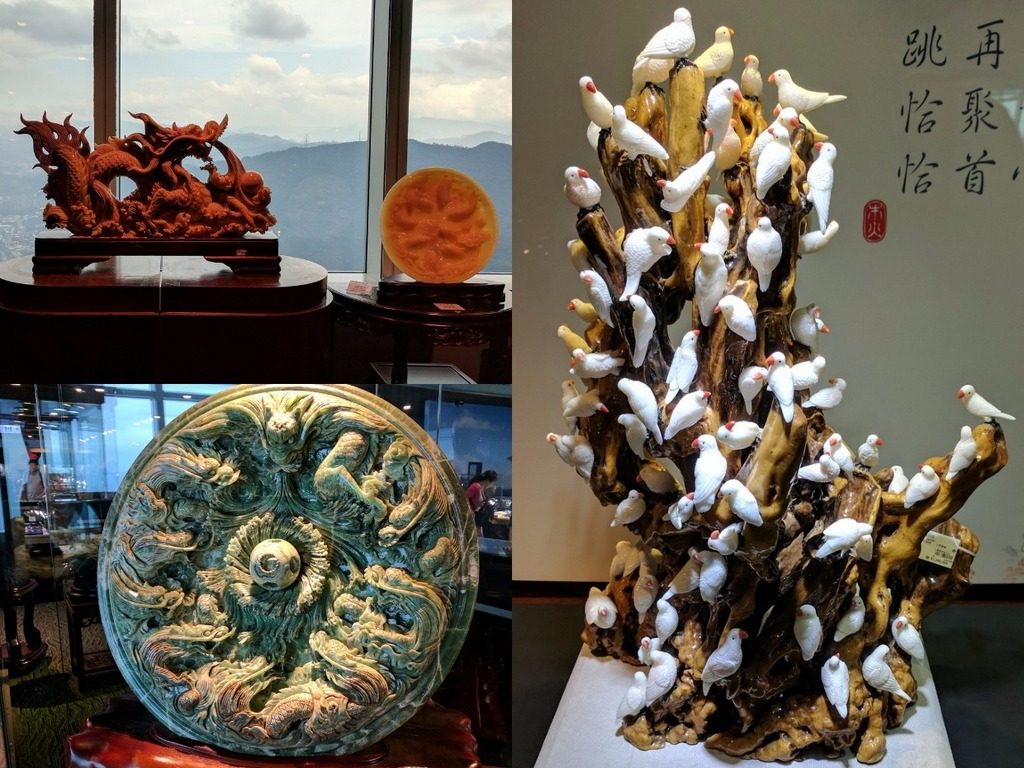 In Tainan, the center for traditional crafts, we accidentally found a wood-carving workshop while walking around town. I believe it produces furniture for temples: 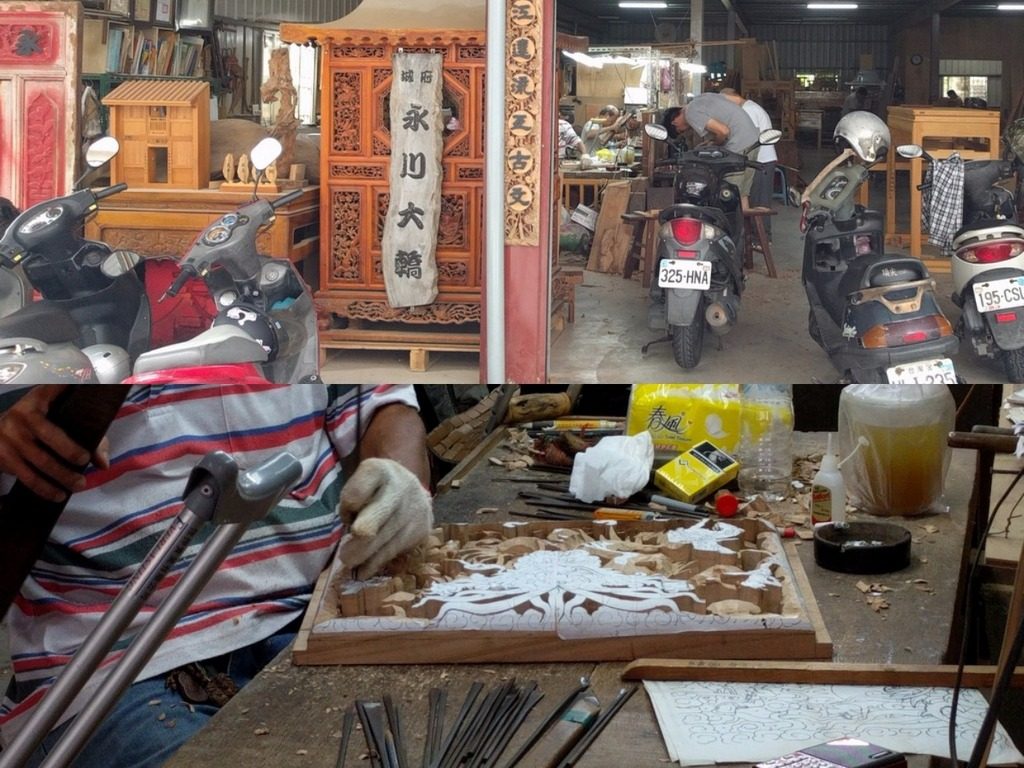 We also hiked a really long time in blazing heat in search of a Chinese embroidery store I read about in a guidebook. The Kuang Tsai Embroidery Shop is owned by Mr. Lin, one of the last remaining silk embroidery masters in Tainan. It ended up being so unremarkable from the outside, that we nearly missed it!

The owner was very nice, though, and let me observe his employees at work and also photograph them: 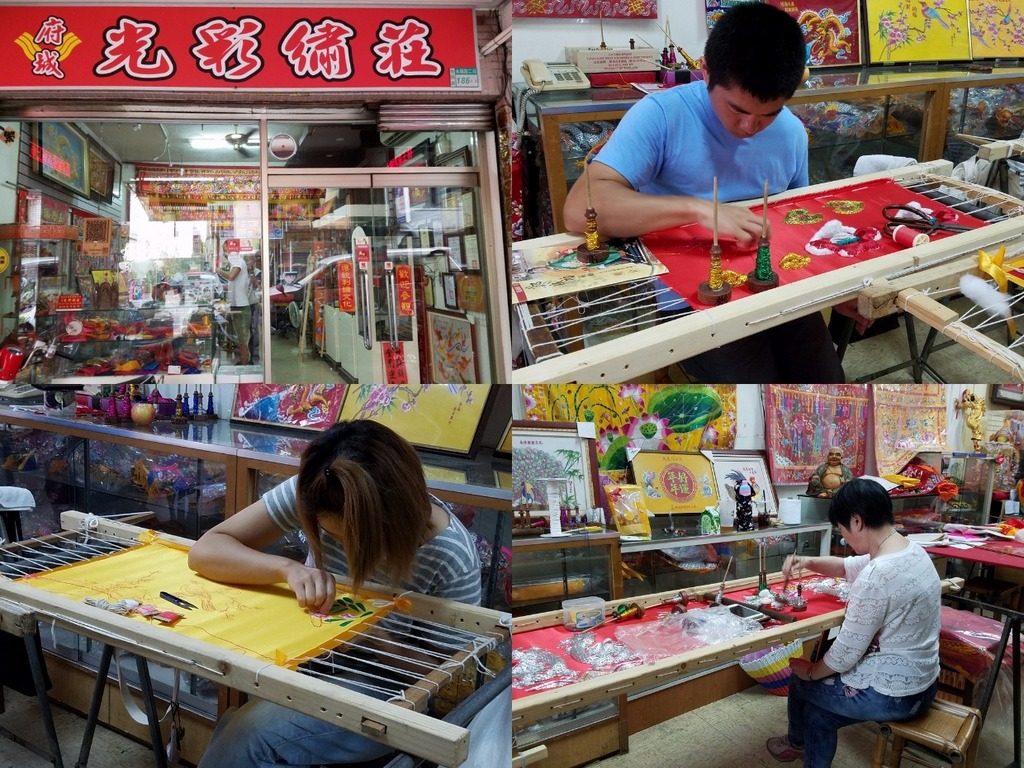 This is some of their finished work: 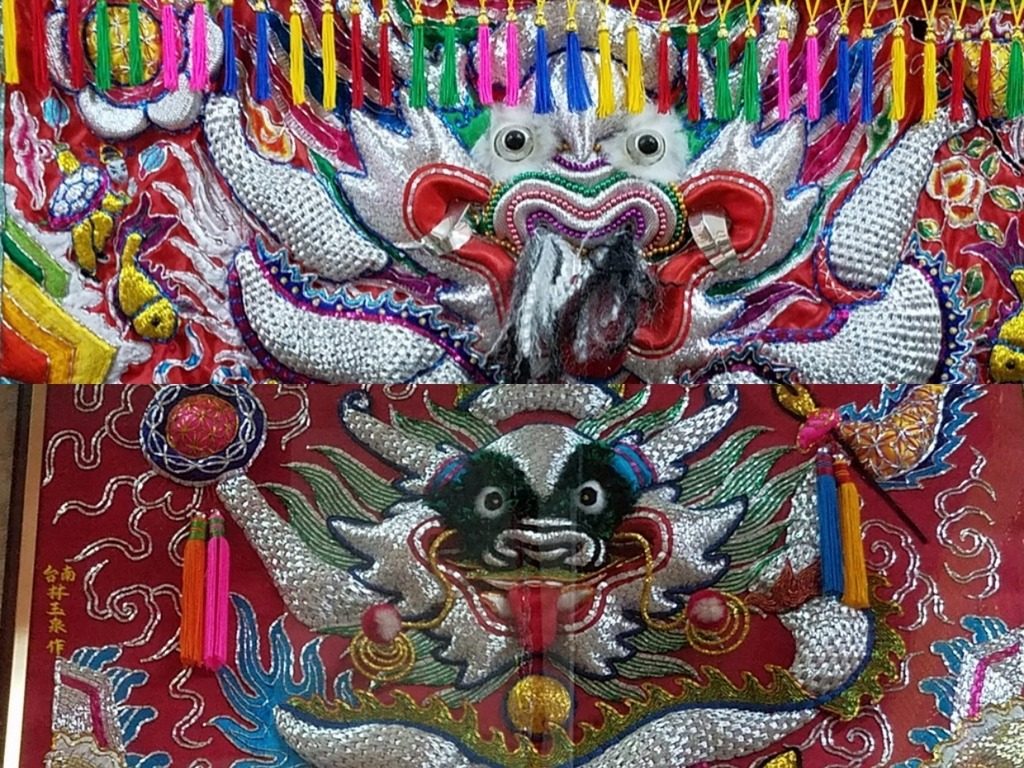 Luckily, there was a boutique coffee shop right next door, with air conditioning, ice-cream treats and an English-speaking owner to compensate my kids for the hike 🙂

After visiting the Chiang Kai-shek memorial, we stumbled upon the nearby National Taiwan Craft Research and Development Institute. This interesting round building is part artist studios, part craft museum, and part gift store. When we visited, the second floor featured an exhibition of modern bamboo art called “Bamboo Traces”, which was quite impressive: 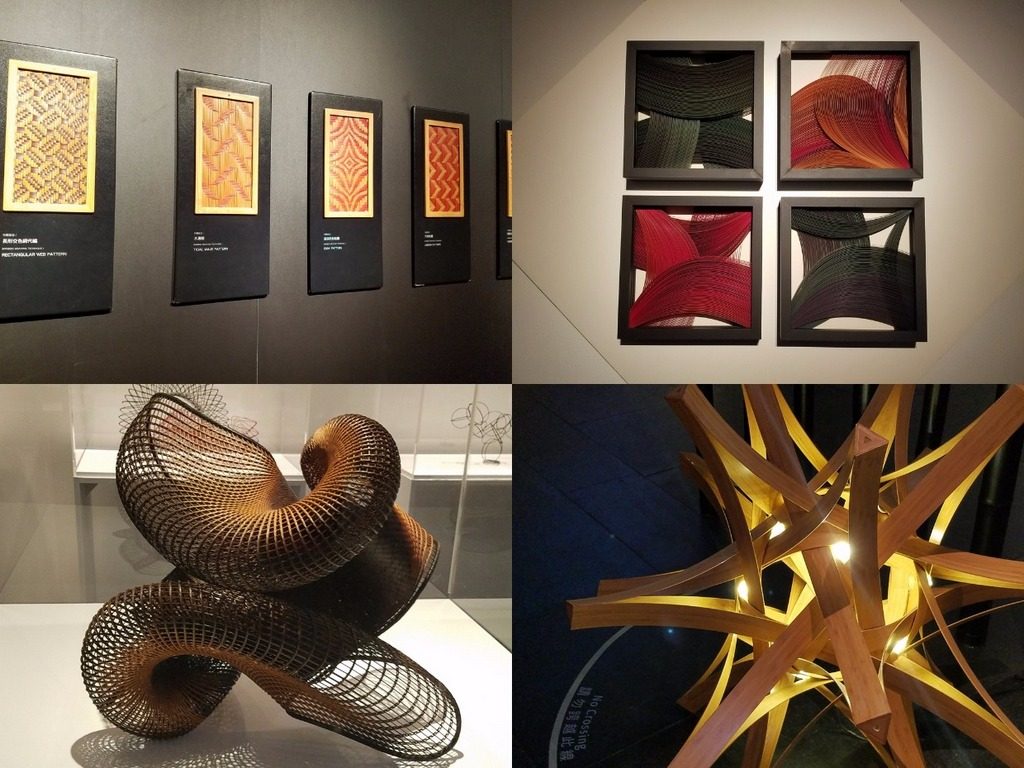 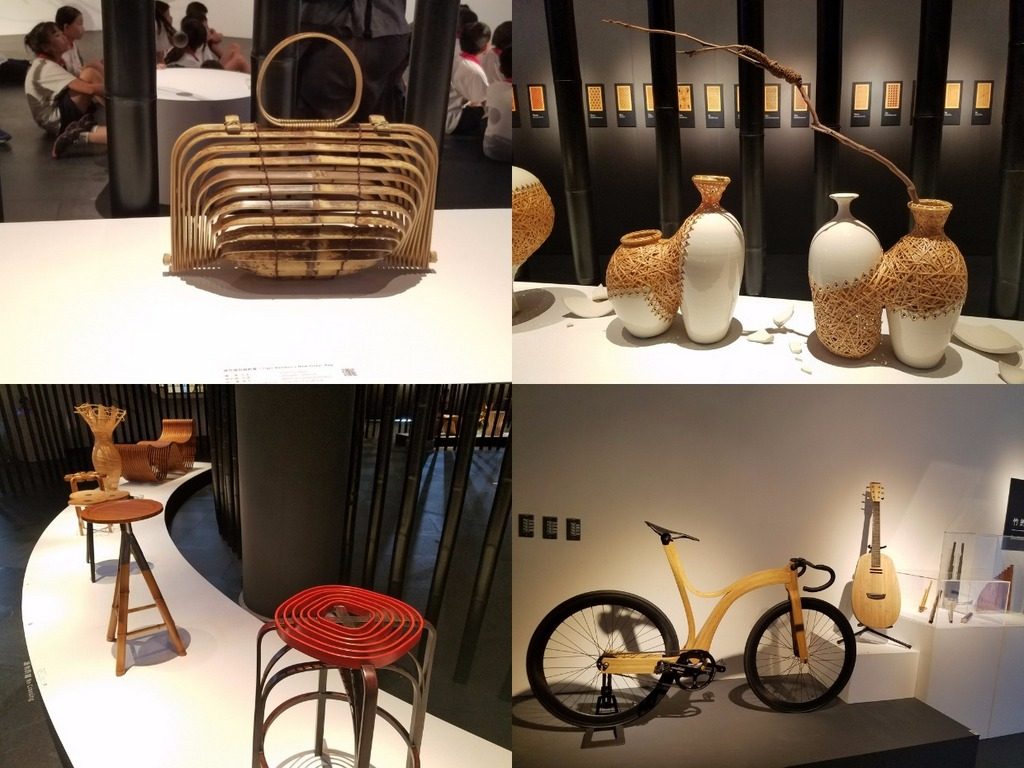 The store on the first floor includes both traditional and modern items at a wide range of prices, and is therefore a great place to look for gifts. Another good place to check out is Taiwan Handicraft promotion Center.

There is also a vibrant and growing community of modern artists and crafts people in Taiwan. In Taipei, many rundown old neighborhoods are gentrifying, filling up with new boutiques and crafts markets. We visited a few of them, but unfortunately couldn’t see all. Some of the places we did visit include Dihua St., which has a few interesting shops; an artisan market right across the street from the Flower Market (that for some reason doesn’t appear in any guidebook); Red House in Ximending; and Songshan Culture and Creative park. In Tainan, the 1930’s Japanese-built Hayashi Department Store now features a host of contemporary artisan boutiques.

One thing that surprised me on this trip was the widespread display of Taiwanese aboriginal culture. When I lived in Taiwan nearly a quarter-century ago, the majority of Han Chinese hardly ever mentioned the native aboriginals. In the rare times they did discuss them, it was with much disesteem. Taiwanese aboriginals were considered backwards, uncivilized. Now, however, aboriginal culture is celebrated everywhere in Taiwan. When we went to get breakfast at the famous breakfast resturant Fu Hang Soymilk, for example, we stumbled upon a stall selling aboriginal crafts at the small, run-down and smelly Huashan Market on the bottom floor of the building. When we went into the National Museum of History right near the above-mentioned National Taiwan Craft Research and Development Institute, we discovered an entire floor with a beautiful display of aboriginal artifacts, including many gorgeous textiles: 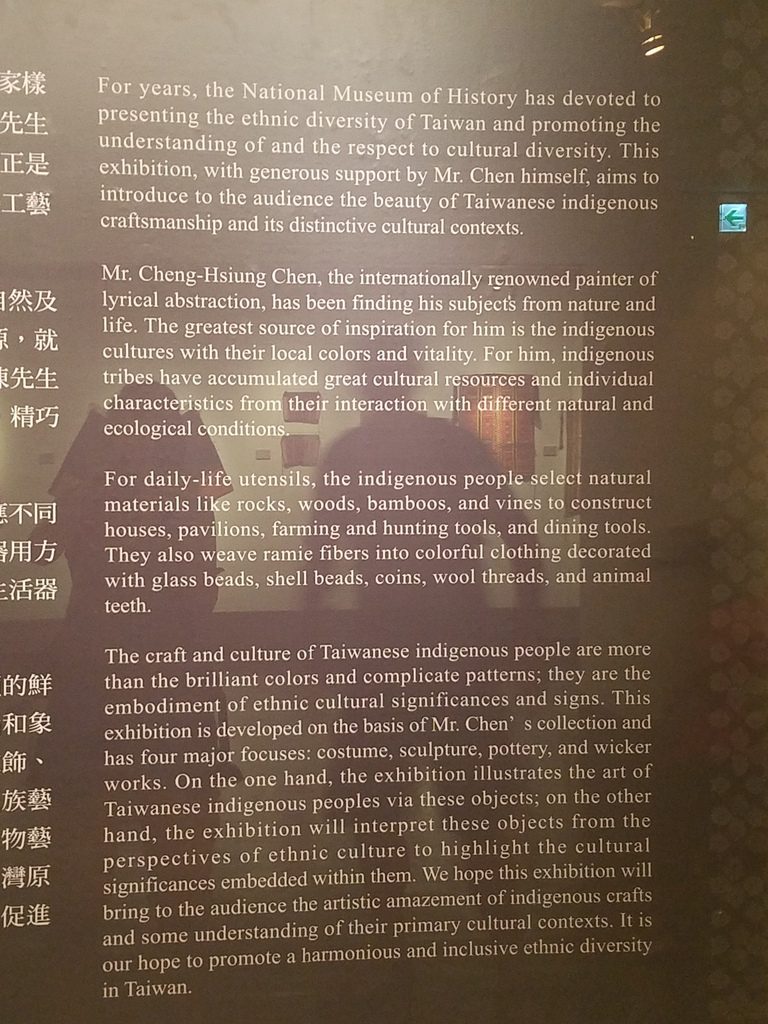 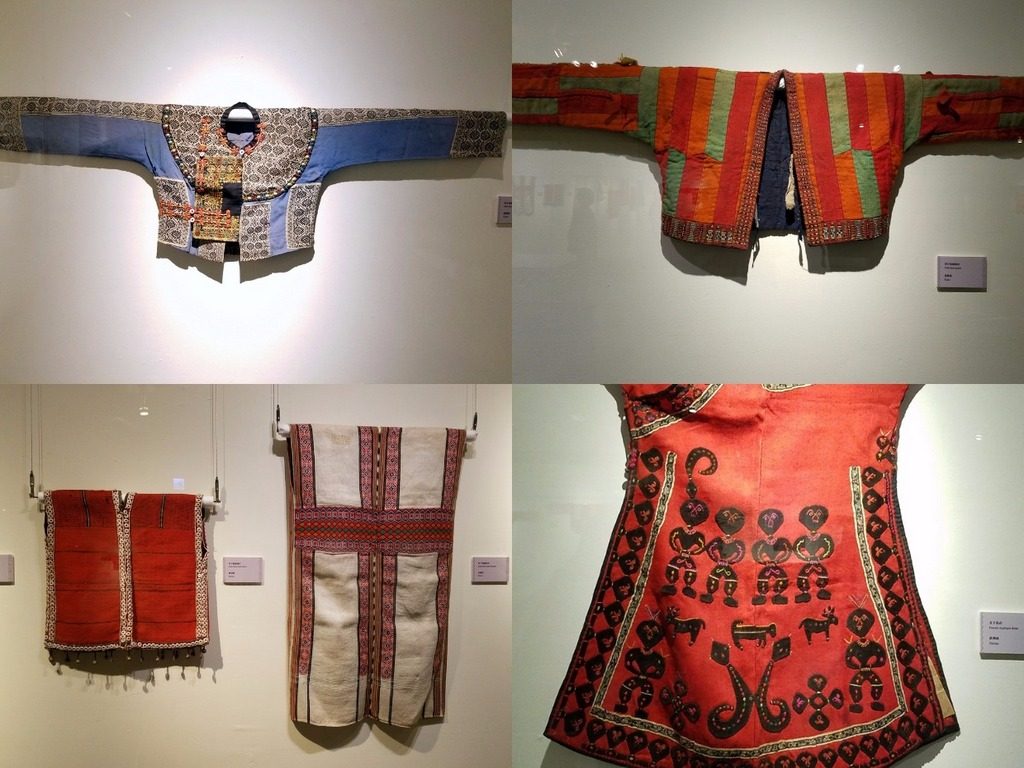 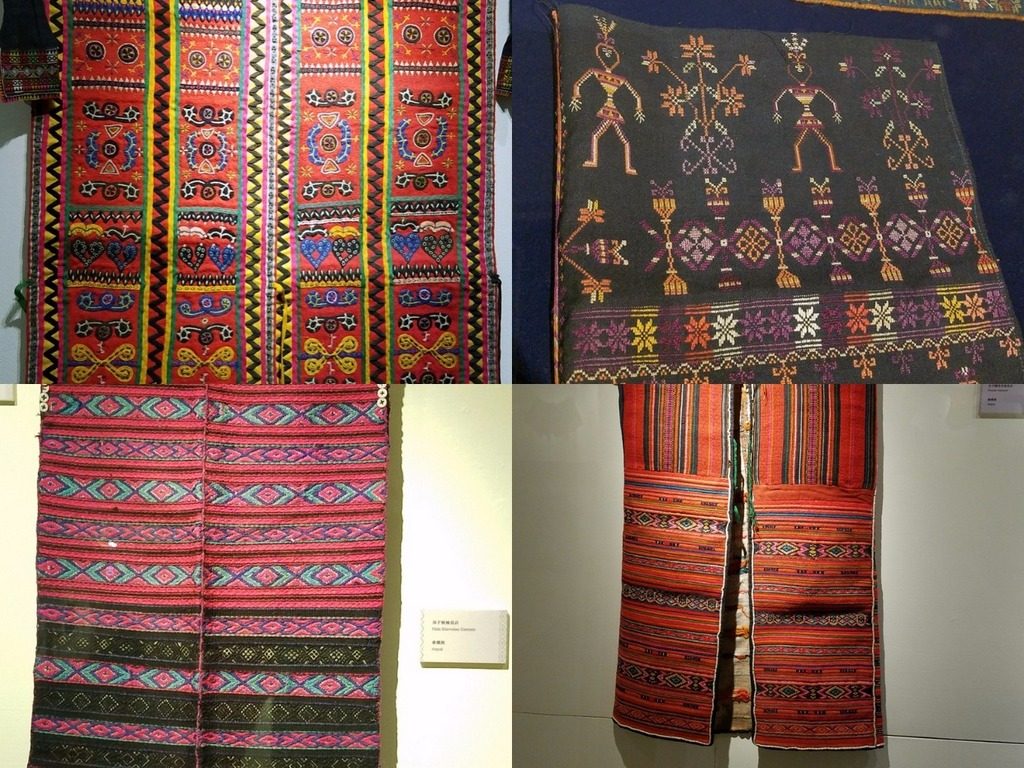 Then there is the new  Shung Ye Museum of Formosan Aborigines across the street from the famed National Palace Museum. This small-yet-pleasant museum has illuminating, educational signs: 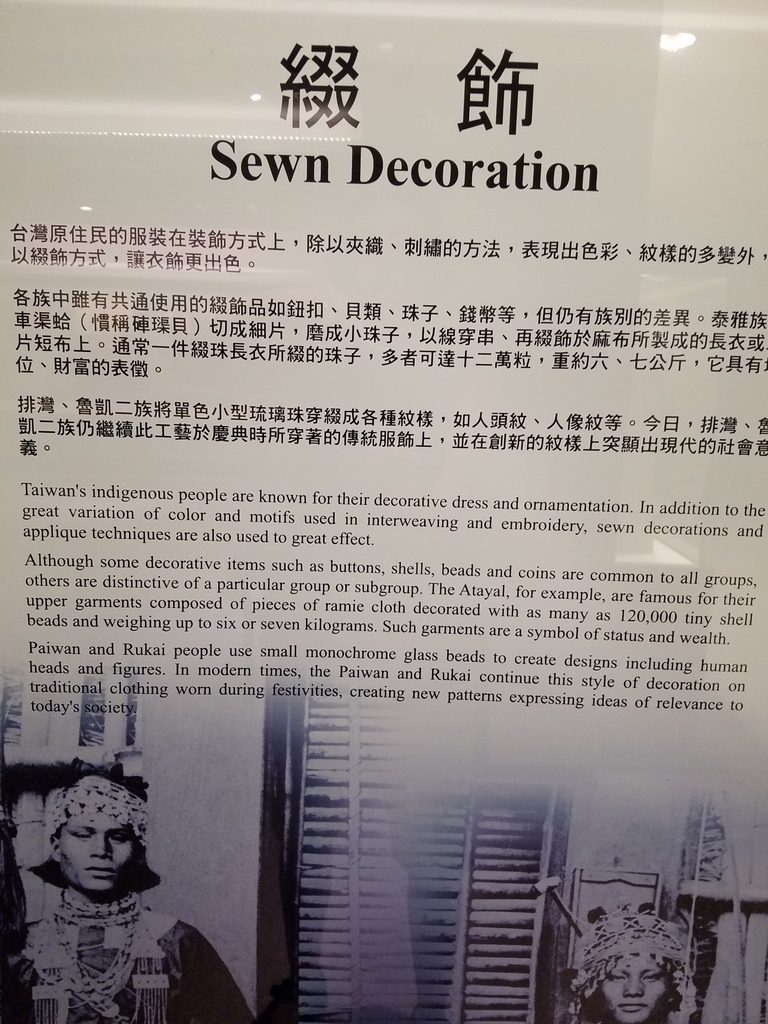 Displays of raw materials and tools: 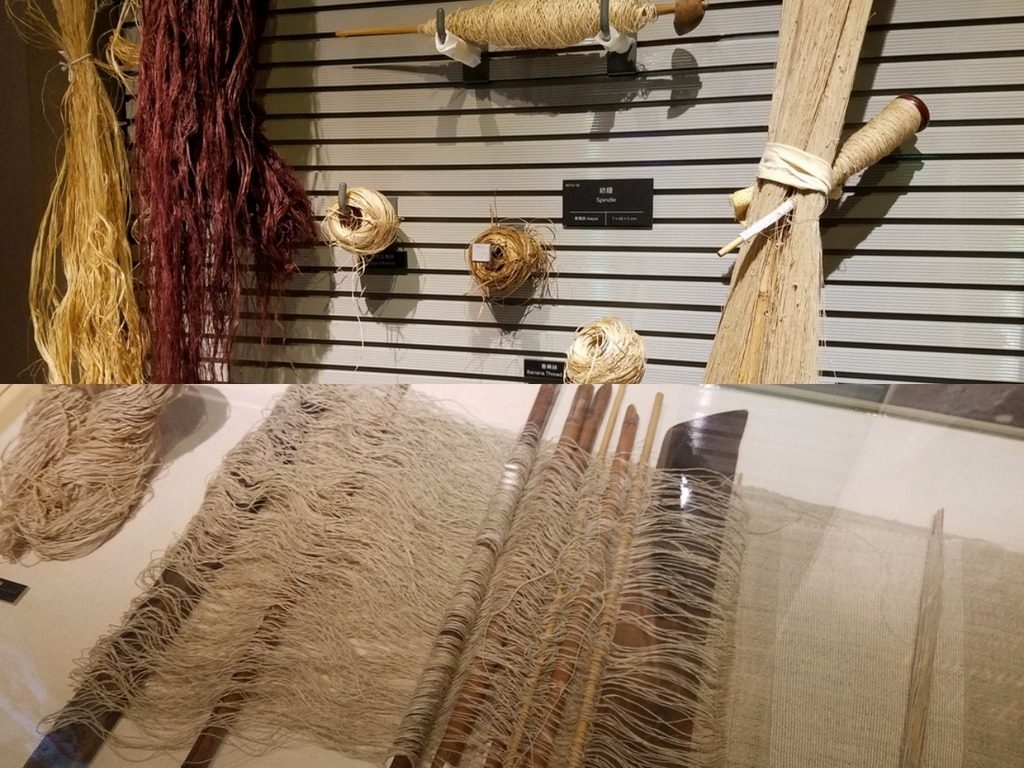 Outfits the way they were worn: 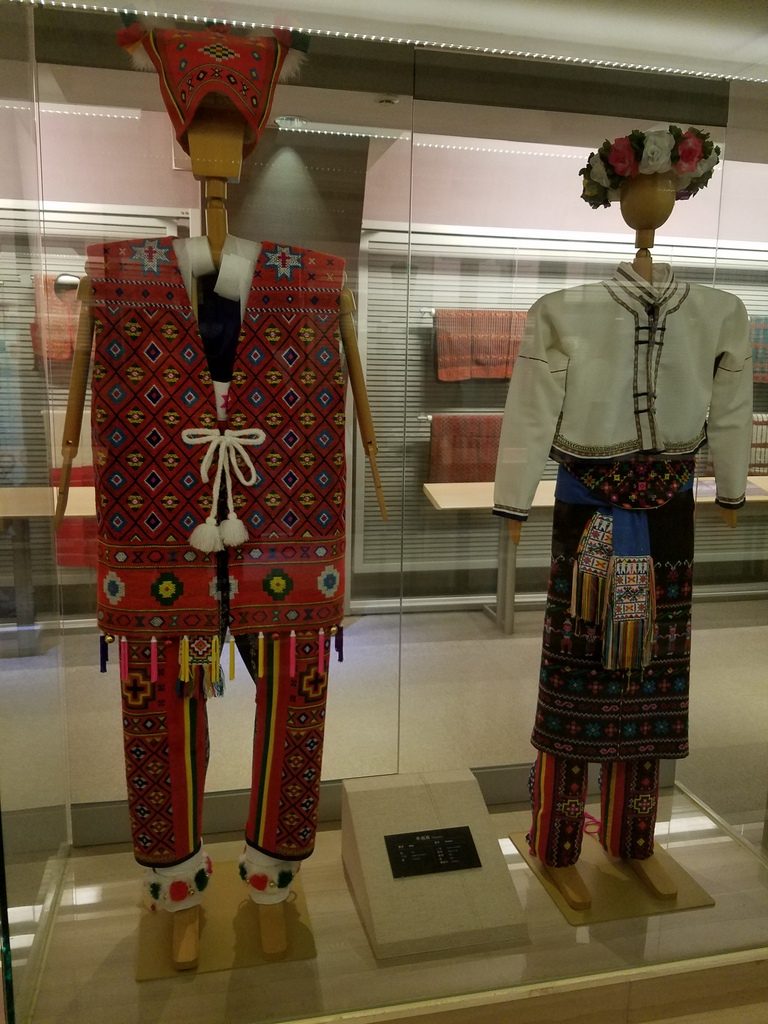 As well as many amazing textiles: 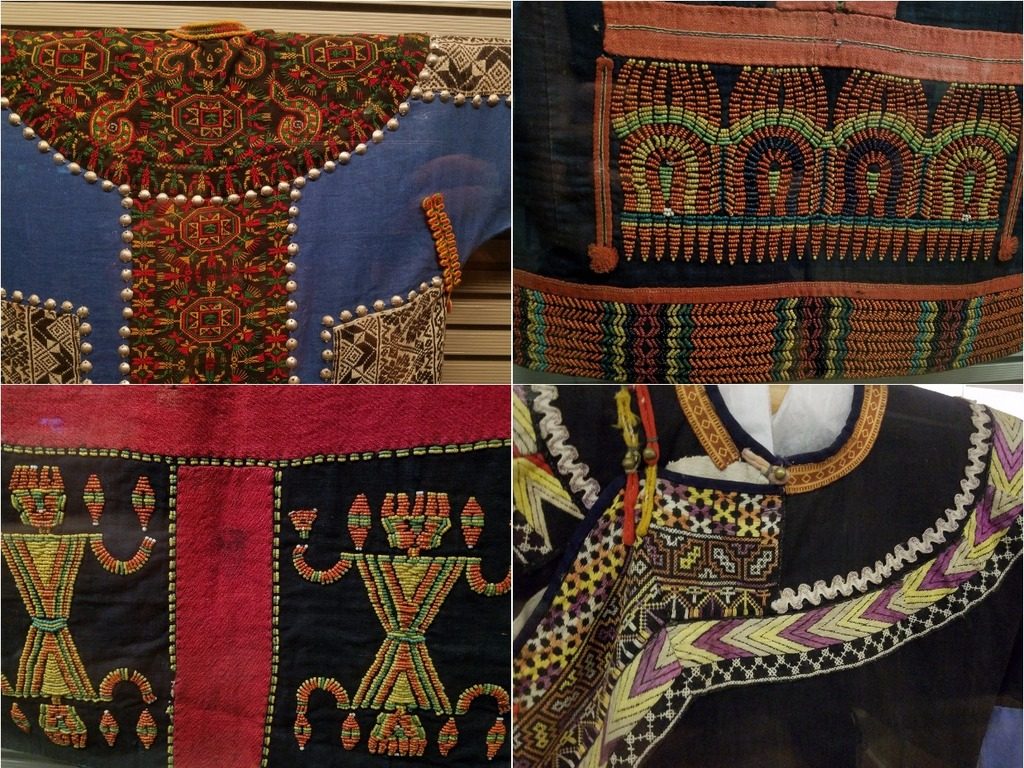 There were even examples of aboriginal bags! 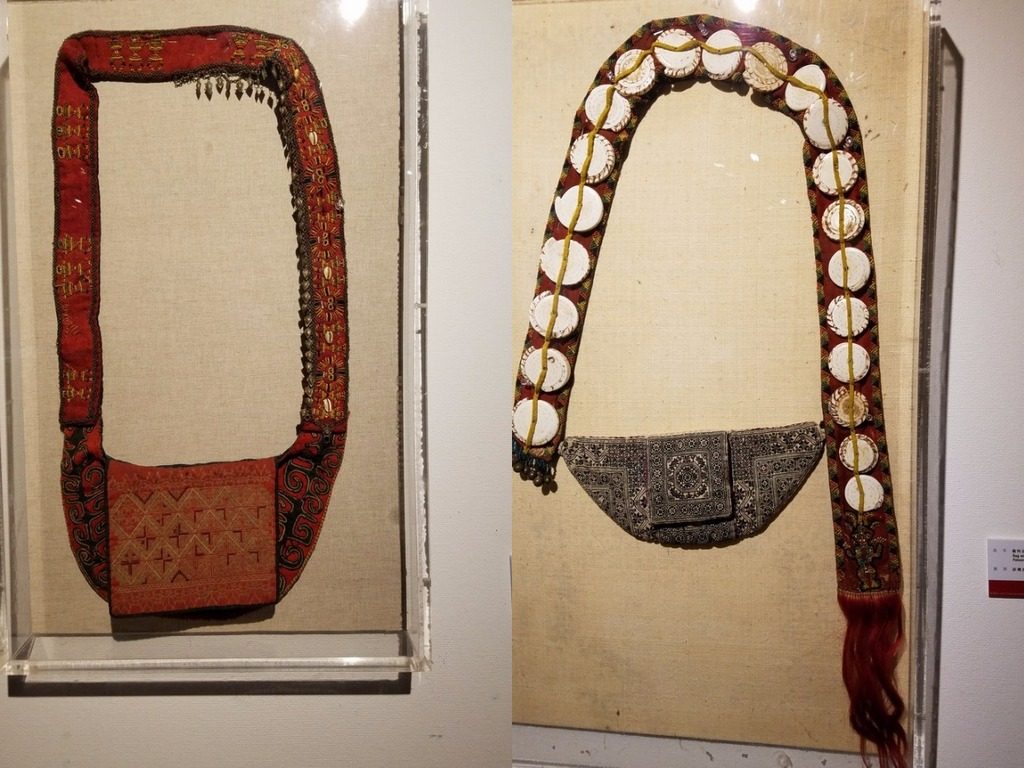 Taroko Gorge has a little museum dedicated to local aboriginals, which includes displays of houses and costumes, among other things: 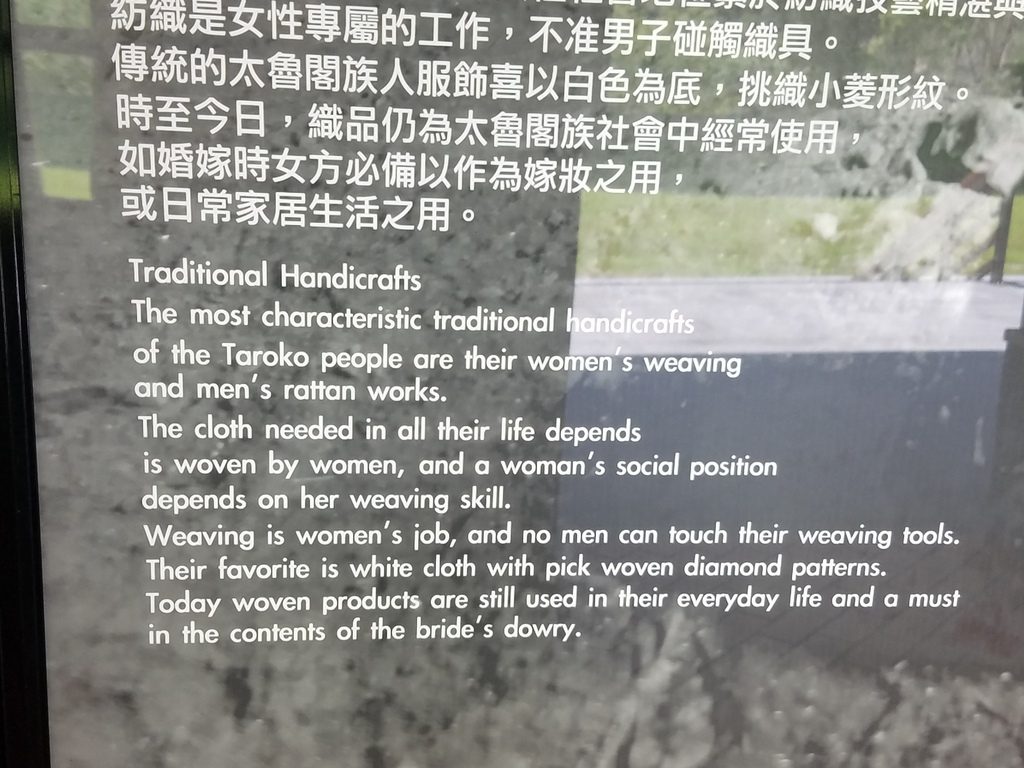 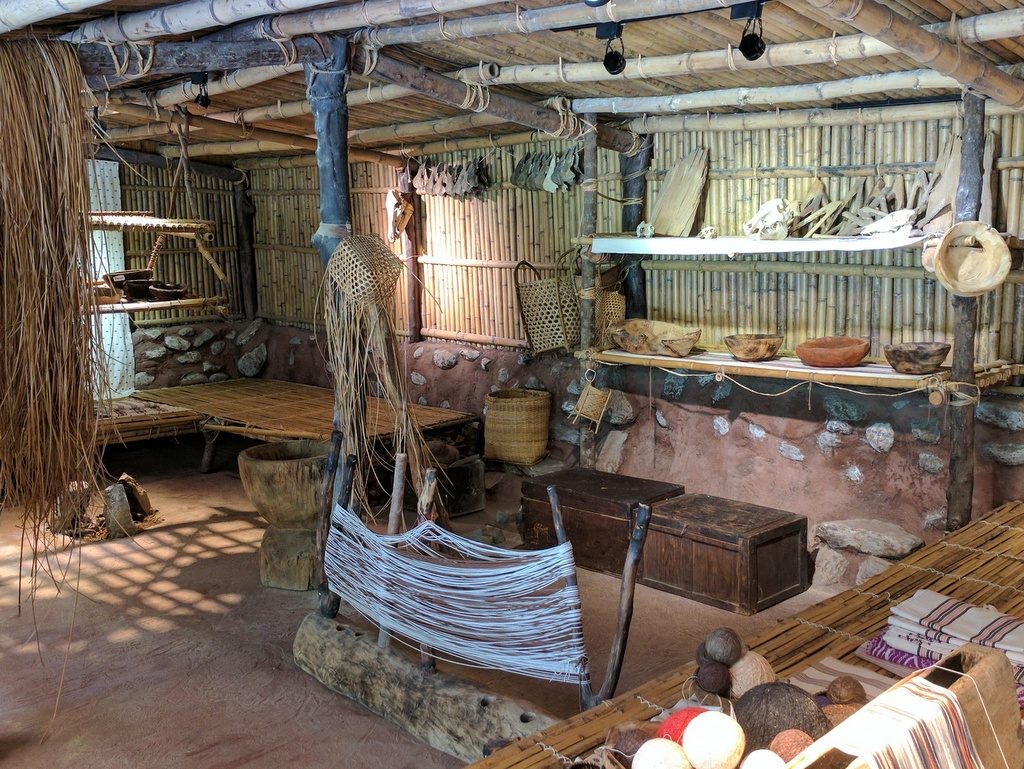 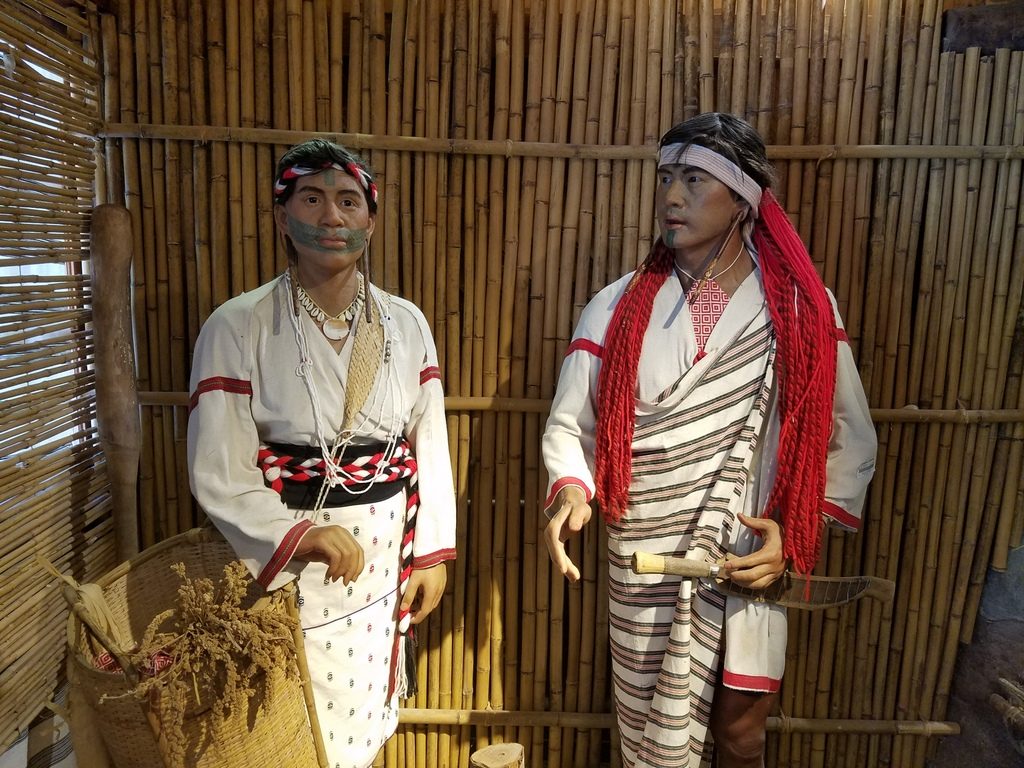 There are even Taiwanese aboriginal theme parks (which we didn’t visit), as well as tourist traps selling aboriginal crafts in villages around Sun Moon Lake (where many aboriginal tribes still live).

I enjoyed learning about the aboriginal culture, and seeing it being, finally, integrated into the general story of Taiwan (even if, at times, in a commercialized way). And I was most impressed with the detail and beauty of the aboriginal textiles!

3 thoughts on “Taiwanese Arts and Crafts: A Mix of Traditional and Modern”